The news that Kiersey Clemons will return to the role of Iris West in Andy Muschietti’s The Flash has been overshadowed by the fallout surrounding the story’s reporting in the trades, as Justice League actor Ray Fisher and others have called out the The Hollywood Reporter for inaccurately stating that the actress was cut from Justice League, where she would have made her debut as West, by original director Zack Snyder.

The publication said Snyder cut her from the film before handing the reins over to Joss Whedon. This, of course, is untrue and they are being called out on it by diverse parties. 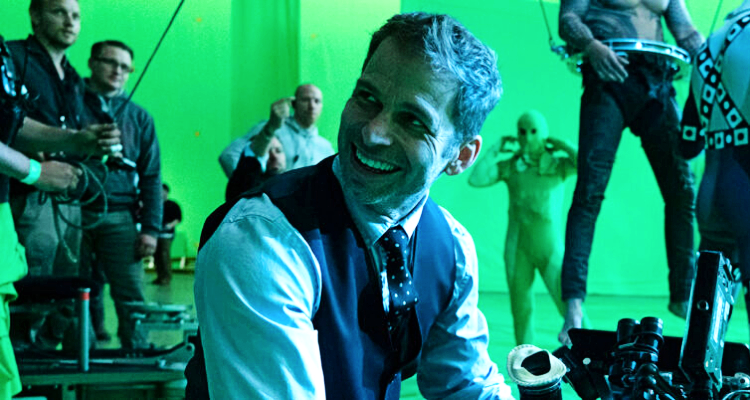 One of those is none other than the outspoken Ray Fisher, who has accused THR of trying to “mitigate” decisions that still haunt Warner Bros.

“I appreciate those @THR attempting to help mitigate blowback for the racist decision-making of @wbpictures executives in 2017,” he tweeted, adding they got their facts wrong. “But hear me now, Zack Snyder NEVER cut Kiersey Clemons from Justice League. Fix this article immediately.” 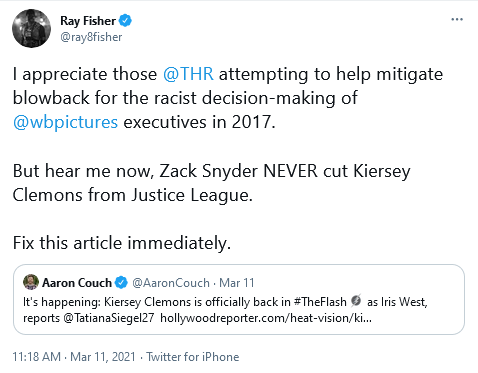 The LightCast Podcast Twitter account also took THR to task for their errors and urged them to change the article, even providing a screenshot of the exact paragraph.

“Correct the article and amend the section that claims Zack removed Kiersey Clemons from Justice League in 2017, because it is inaccurate,” said LightCast’s post. 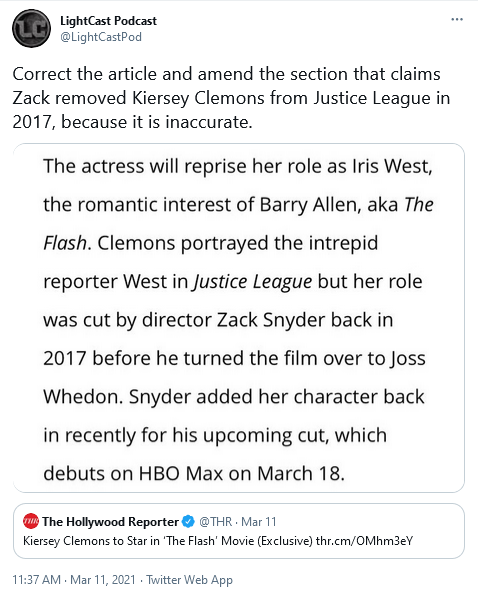 They then tweeted directly at writer of the article Aaron Couch, pleading for him to amend his work.

“[email protected] you think you are right over @ZackSnyder and @ray8fisherin RE: to who was cut from the film and who was not?” LightCast tweeted to Couch. “I think you should do the right thing and get an actually source to confirm that, because it is not correct and you are making @THR not look good.” 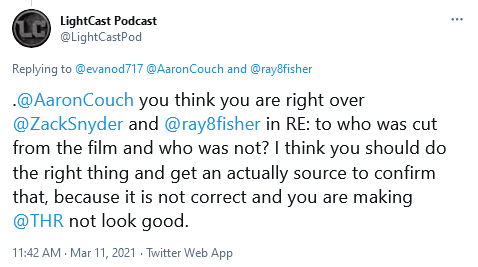 Yet, Couch’s article was not without its defenders, as THR contributor Richard Newby used Snyder’s own words to justify Couch’s reporting.

Sharing Snyder’s own words from his Vanity Fair profile, wherein the director revealed WB and former head Kevin Tsujihara told him to take Kiersey Clemons and her subplot out of the film to tighten the running time. Newby tweeted that the information in Couch was correct, claimed fans were just trying to harass reporters, and claimed that “there’s no hidden agenda here.” 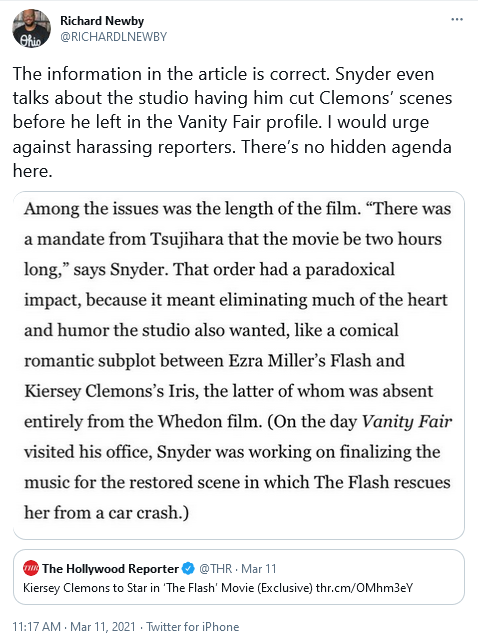 In response to a fan who asked “does that mean he actually removed her though?”, Newby reiterated that Clemons “was cut while he was still on the film” and asserted that “the issue is that people want biased reporting from a non-biased news piece.” 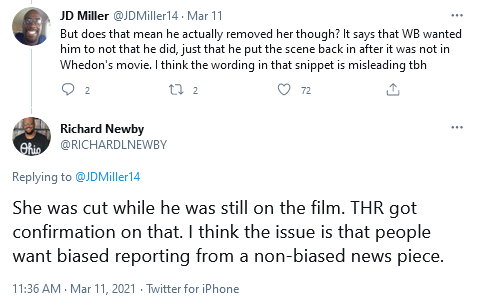 However, Fisher wasn’t buying it, as following Newby’s tweets, the actor pointed out that “what you’ve chosen to highlight with regard to Kiersey is coming from the reporter at Vanity Fair.”

“It is not a quote from Zack Snyder,” Fisher added. “Please stop.” 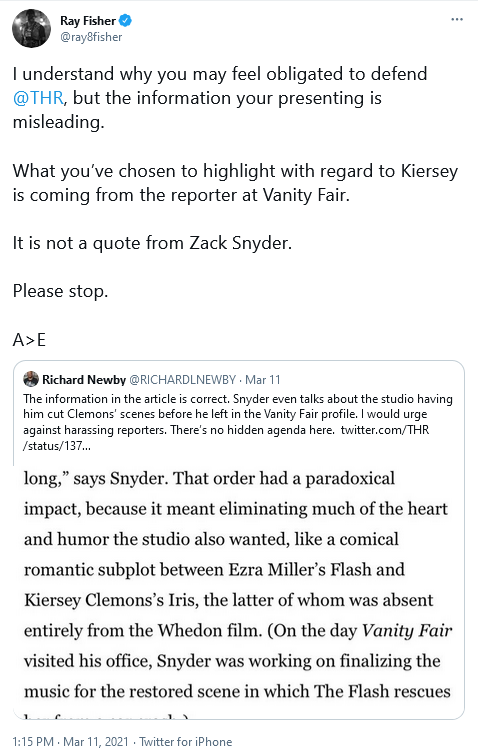 As of writing, despite the pushes and pleas, the snippet remains unchanged, without even a note being added to give proper context.

Kiersey Clemon’s scene, which can be seen in Snyder Cut teasers, involves Iris West being saved by Barry Allen from an oncoming car. The exact nature of her role in The Flash or if it will connect to Snyder’s Justice League remains to be seen.

What do you make of The Hollywood Reporter’s reporting on Zack Snyder? Let us know your thoughts on social media or in the comments down below.