With the news that  will see Michael Keaton don Batman’s cape and cowl for the first time in thirty years, conflicting reports have led to some fans questioning whether the actor will remain in the role of Bruce Wayne beyond his appearance The Flash.

Scooper Grace Randolph of Beyond The Trailer, running with what her sources had told her, first reported that the movie’s Flashpoint story line will see Keaton replace Ben Affleck as the DCEU’s Batman going forward.

According to Randolph, Keaton’s Batman will serve as a mentor figure to Barbara Gordon, who will in turn serve as “the “in the field” DCEU Bat person”. This would put him in a similar position to the Marvel Cinematic Universes’s Nick Fury, a role which has everyone looking towards the possibility of a live-action Batman Beyond adaptation, which has previously been rumored to be on the table. 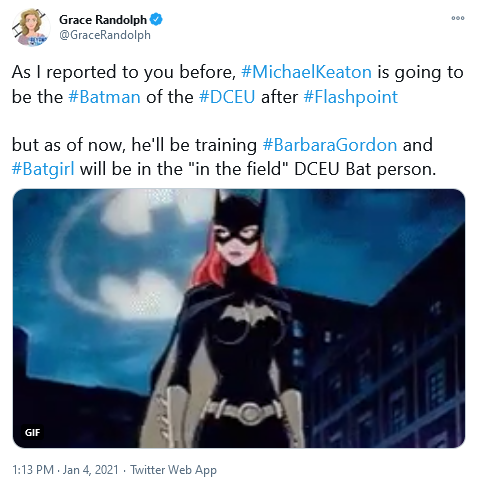 Randolph also hinted that this change in focus from Bruce to Barbara was one of the reason DC Film head Walter Hamada believed Batgirl to be a “risky property”, noting that the film would deviate from its original source material much the same way Birds of Prey did, thanks to the involvement of writer Christina Hodson.

“Christina Hodson is writing Flashpoint, which brings back Keaton, AND Batgirl,” wrote Randolph. “Plus she wrote Birds of Prey, and this is totally in the same vein re changing the source material.”

Randolph also noted that DC Film Head Walter Hamada’s belief that Batgirl is a “risky property, and the way a film featuring Barbara would deviate from the source material the way Birds of Prey did, especially with Christina Hodson writing the script. 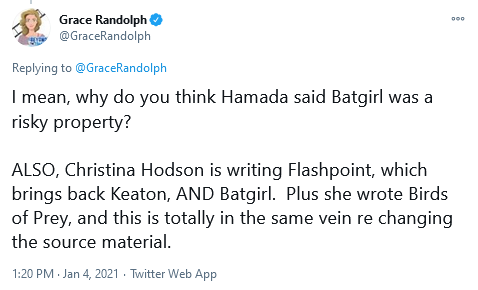 However, the story surrounding Keaton’s return doesn’t end there.

In a series of Instagram slideshows, film industry and superhero centric podcast LightCast countered Randolph’s reporting, asserting that Keaton is not “replacing any Batman as the “primary” Batman”, as “Affleck will also be Batman in “The Flash” film as well and even gave part in helping develop the script” and “will be seen on HBO Max”.

It should be noted that LightCast didn’t specify whether this assertion was in reference to Affleck’s upcoming appearance in The Snyder Cut or his proposed spinoff miniseries.

LightCast further notes that Robert Pattinson’s incarnation in The Batman will be a standalone version of the Dark Knight – something we’ve known for a while –  who exists solely on “his world” of o Earth-2. No

“This is the beginning of the Multiverse concept,” stated LightCast. “One is not replacing the other.”

In a rebuke of the numerous sites who announced in the affirmative that Keaton would outright replace Affleck, Lightcase declared that “false headlines and reporting were very telling today when attempting to gaslight and lie to readers with misinterpreted information that was never present in the original New York Times article.”

“The original article never spoke about who were the two Batmen to get film franchises,” LightCast explained. “And Brooks responds to a Twitter users question with just “Keaten” that sent the internet blogs to speculate and make up their own confirmations: which you will soon see is not accurate.”

They showed how Brooks Barnes, writer of the New York Times piece on Walter Hamada that started all this, cleared up comments he made about Keaton playing Batman.

First, asked on Twitter by journalist and film critic Nestor Bentancor if he was referring to two Bat-franchises running simultaneously or Keaton being part of something not centered on the Dark Knight, Barnes simply responded, “Keaton.” 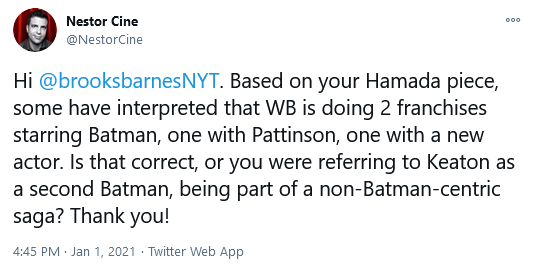 A wave of stories hit the web, based on that one tweet, and it wasn’t until Monday that Barnes corrected the record. He tweeted he was referring to “*one film*” (The Flash) Keaton is in and would’ve put more info in his article if he had it. 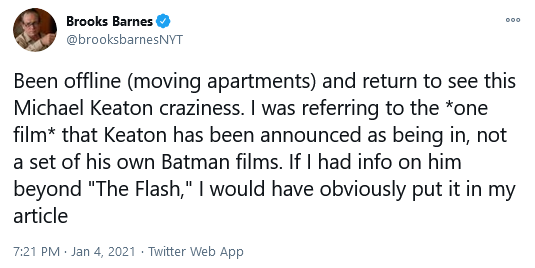 Putting a bow on their coverage and taking a victory lap, LightCast wrote in the final slide of their second post, “Let this be a lesson to every reader and follower of a certain website blog or trade. Do your own rhetorical analysis of what you are reading. Context is very important, always ask the ‘what,’ ‘when’ ‘why’ ‘who’ and ‘how’ and understand the ethos, pathos, logos, and kairos of who is posting information.” 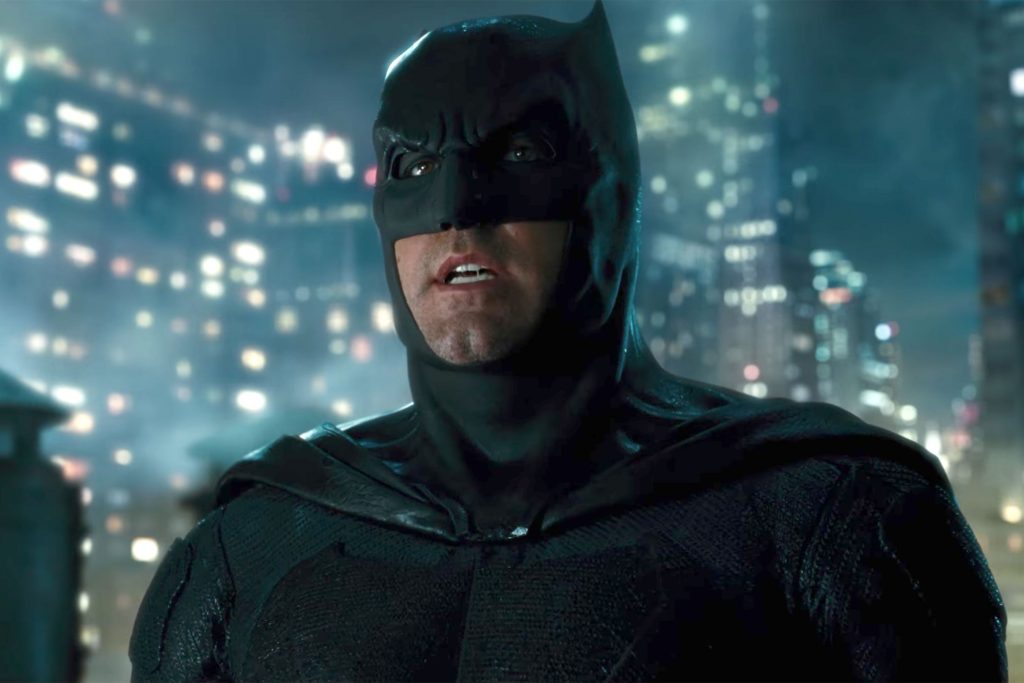 So from that, it’s more than likely Affleck is not being replaced, although we can’t say for sure whether either Caped Crusader will have a future past their respective appearances inThe Flash.

WB may be taking the wait-and-see approach there, as they appear to be with Batgirl and numerous other DC spinoffs. It’s the same approach they’re taking towards The Snyder Cut, as they’re reportedly waiting to move forward on various projects based on the film being considered a success by the right metrics.

What do you make of these reports? Let us know your thoughts on social media or in the comments down below!