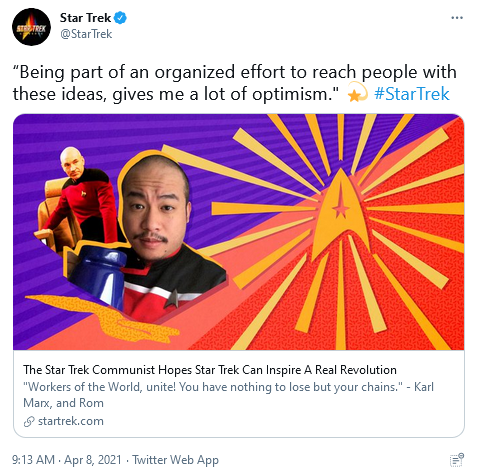 In an April 9th interview published to the Star Trek website, Nguyen that the only way to “actually achieve a one-world government with no national borders, where we’ve eliminated poverty and war and hunger and disease”, as exemplified the franchise’s United Earth government.

“The conclusion is, only through a socialist revolution to overthrow capitalism, going to the next stage of human development, can you actually do that,” asserted Nguyen. 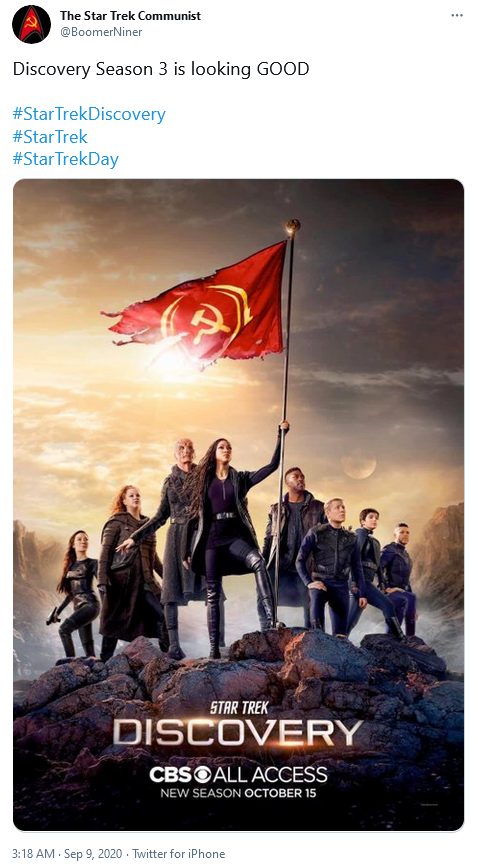 On the origins of his far-left ideological beliefs, Nguyen noted that he became an ardent communist after his generation, Millennials, were “affected by the crisis that is capitalism.”

“That’s obviously the Millennial generation and the Zoomers, right behind us, “said Nguyen.They were told that they just sort of go to school, and take on this debt, but then you’ll get a job. They play by the rules, right? But then they’ve emerged into a market that is virtually non-existent.” 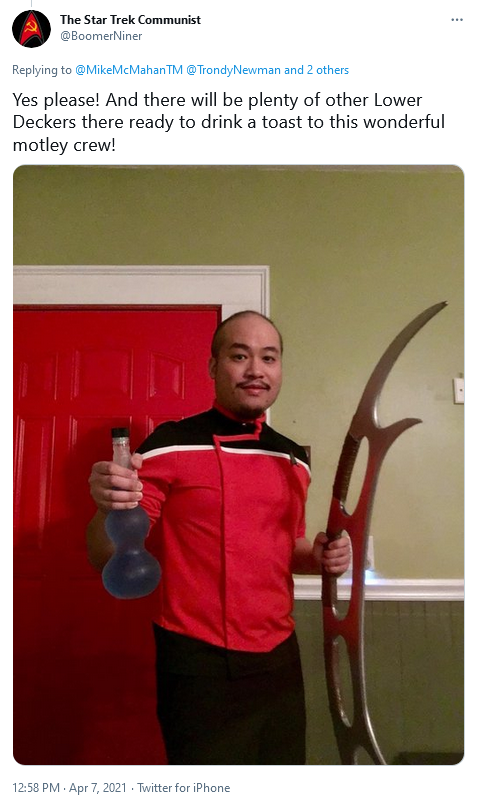 He continued, “They are swimming in debt. And then having almost all of their income go for rent, [they’ve] got to piece together multiple jobs, three or four side hustles, gig jobs…this is the best that capitalism can do. So, I think I became radicalized just by my experience, just like millions of other people, not just in this country, but around the world.”

“The reality is, we actually already live in a post-scarcity world. Now,” he further argued. “There’s often an argument that people say, ‘Oh, you only get the Star Trek future because you have a replicator box in the wall. And, you know, only then can you have socialism or communism,’ which I would say that’s a very disingenuous dodge because we already have the ability to house and clothe and care for everyone right now, that’s not that hard. The Earth has the ability to feed 10 billion people.” 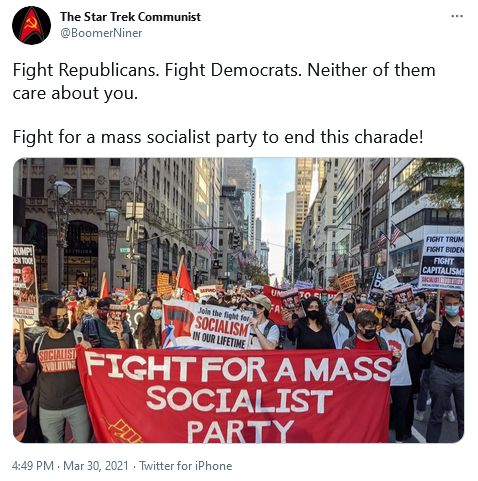 At this point in the article, things get a bit bizarre, as despite having framed him as some sort of ideological pioneer, Star Trek website writer Sean Kelly admits that Nguyen’s approach to promoting his beliefs is based less on intellectual reasoning and more on throwing social media tantrums through his Twitter account (@BoomerNiner).

“His approach seems, at first glance, shallow — he doesn’t spend a lot of time debating his haters or engaging in nuanced descriptions of theory, though talking to him for even a few minutes shows that he is more than capable of doing so,” Kelly begrudgingly admits. “Instead, his pictures and memes serve as bait for those who grow enraged by his posts.” 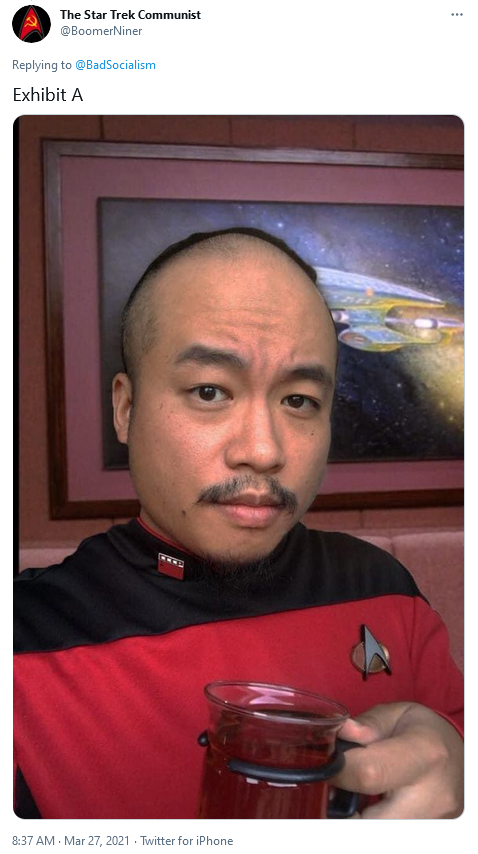 Nguyen even admits to refusing to engage in debates with his critics, stating, “It’s the online culture of saying, you know, ‘change my mind,’ they want that argument. They want to have this debate, and I’ve already gone down that road a long time ago.”

He also attempted to position his tired social media antics as effective activism, telling Kelly, “It’s just actually a way to get people to ask me about socialism, Marxism, and communism. My DMs are actually open all the time, answering questions.” 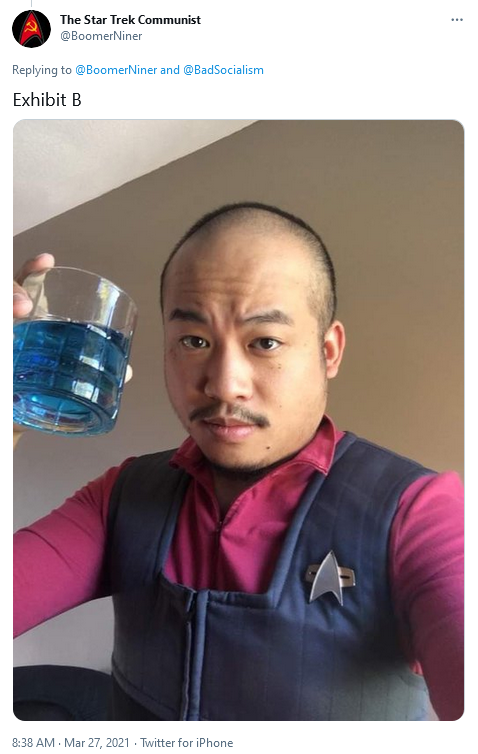 Admitting that politics can be difficult to discuss with those who are “unitiated”, Nguyen tells Kelly that it’s easier to approach the subject by speaking to the character of Miles O’Brien, the prominent transporter chief and chief of operations seen across Star Trek: The Next Generation and Star Trek: Deep Space 9.

“You know, he’s very proletarian,” Nguyen argued. “His [ancestor] was Sean O’Brien, a union man and he’s a real proletarian, but he also plays cello. He plays darts. He’s a family man, with children. Has a well rounded life, while also being the heart and soul of Deep Space Nine.” 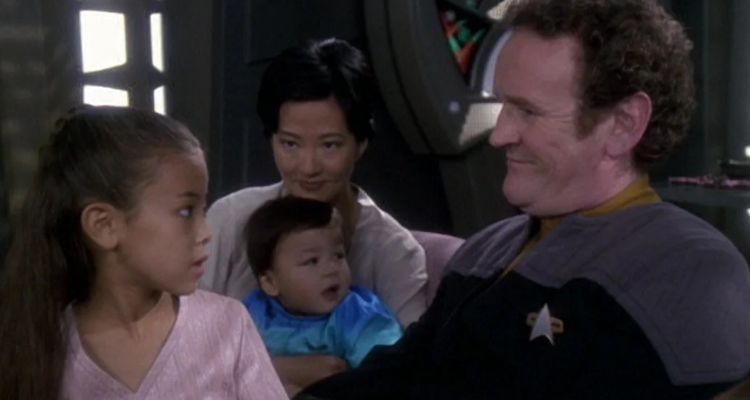 He further added, “And that’s exactly what we’re saying … if we free ourselves from living paycheck to paycheck, what couldn’t we do? How much of our lives would be freed up? If you didn’t have to worry about putting food on the table? That’s why people gravitate toward Star Trek, they look at Star Trek, ‘Wow, I really want to live on that nice pastel-colored ship.”

In conclusion to the piece, Kelly praised Nguyen, writing that not only does he fit in “with the best traditions of Trek fandom in that he’s an optimist”.

“Being part of an organized effort to reach people with these ideas, gives me a lot of optimism. It’s what we call ‘revolutionary optimism.’ [There’s] tremendous class consciousness right now, people are learning very rapidly,” Said Nguyen, before ironically concluding, “There’s no better time to market.”. 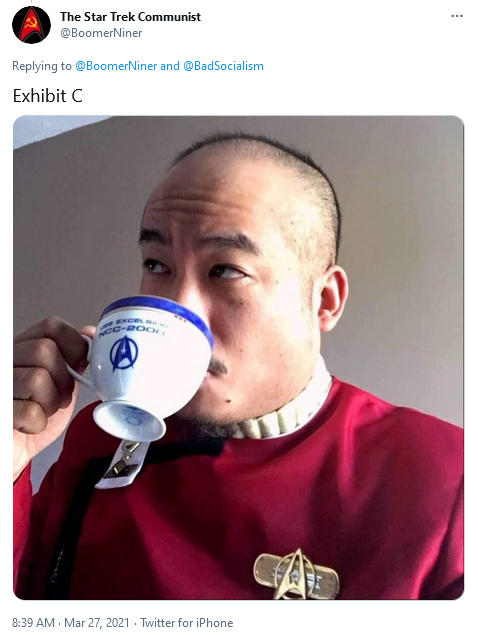 What do you make of Star Trek’s official promotion of Nguyen and his communist ideology? Let us know your thoughts on social media or in the comments down below!