The California gubernatorial recall election to replace Gavin Newsom (D) will be taking place on the 14th of September, and conservative talk radio host Larry Elder is one of the candidates currently running to unseat the Democratic Governor. 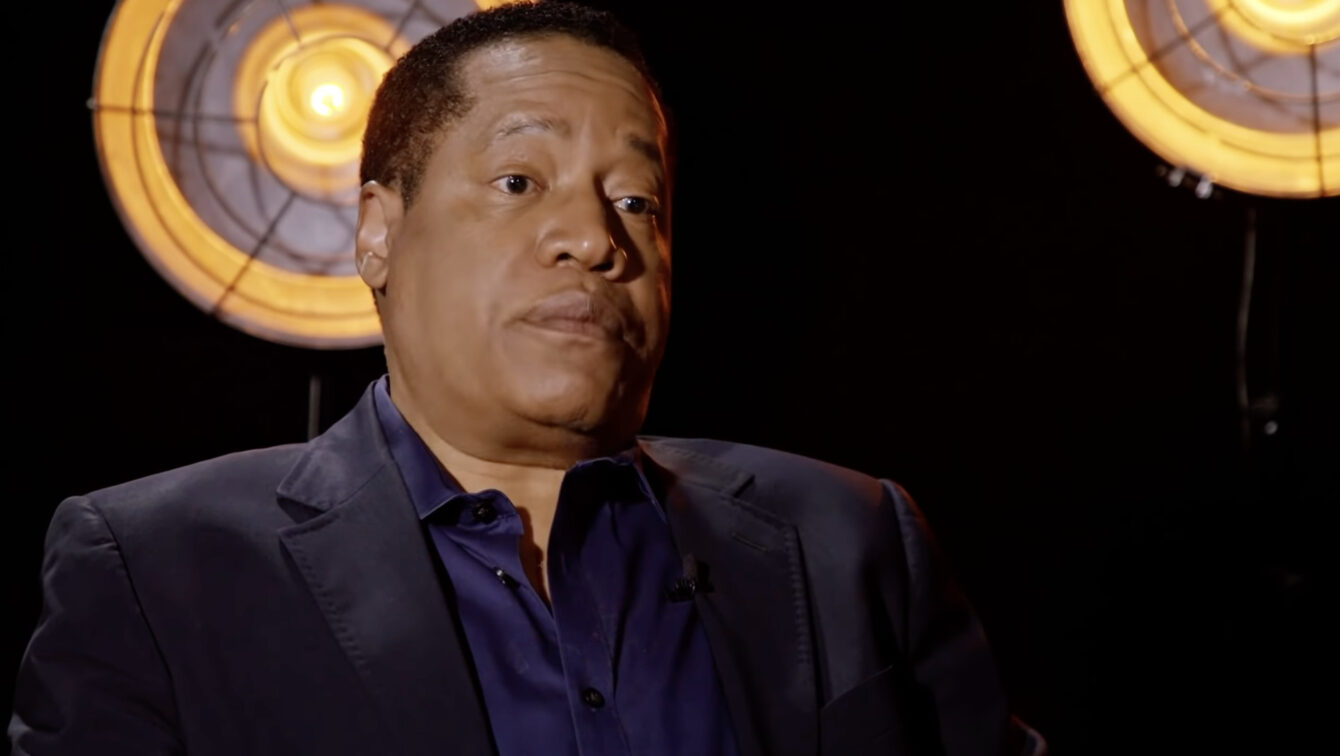 Woke Hollywood celebrities have taken issue with Elder’s political views and wasted no time in using their influence to encourage their fans to oppose the recall effort — which is to be expected, considering that California is the biggest blue state in the United States.

Furthermore, these Hollywood elitists have resorted to attacking the Republican candidate on social media, going as far as to say that the recall election itself is an attack on democracy.

Implying that Newsom’s recall would be a threat to America’s very standing as a democratic state, The Lord of the Rings star Elijah Wood wrote, “Oh, if it wasn’t already something you’d considered, vote NO on the California Recall. Our state and democracy depends on it. Thanks!”

Rosanna Arquette dramatically wrote, “Vote no on the California recall our lives literally Do depend on it.” Thankfully, Arquette’s life does not depend on her punctuation skills; or lack thereof, for that matter.

In a follow-up tweet, the woke actress doubled down on her stance, encouraging her followers to oppose the recall by declaring, “Californians must vote no on the California recall because our lives truly depend on it,” adding that “the alternative is a death sentence for democracy.”

“Vote NO on this motherf—ing RECALL,” wrote comedian Sarah Silverman. “The ballot’s in your mailbox. Vote No. that’s all. Then send her in. If Republicans find this recall grift works they’ll do it everywhere.”

Stand-up comedian D.L. Hughley slammed both Larry Elder and Caitlyn Jenner, each running as a Republican candidate, whilst prompting his followers to oppose the recall.

“So the best the GOP could do in the California recall is #Caitlyn Henner and #LarryElder??? One is famous for losing her D**k, and the other is famous for being one! #NoOnCARecall! #TEAMDI,” wrote the comedian in what looks like a transphobic attack on Jenner.

Hughley should probably know better, considering that his political sector seemingly frowns upon such transphobic attacks. Could it be that such moral positioning is only a façade carefully crafted to garner votes?

“Just voted in CA! Early votings starts today! (My ballot never came so I went in person),” wrote Comedian Billy Eichner. “Get out there and vote NO on the recall if ur in CA or else we’ll have an anti-vaxx Trump supporter running CA!” 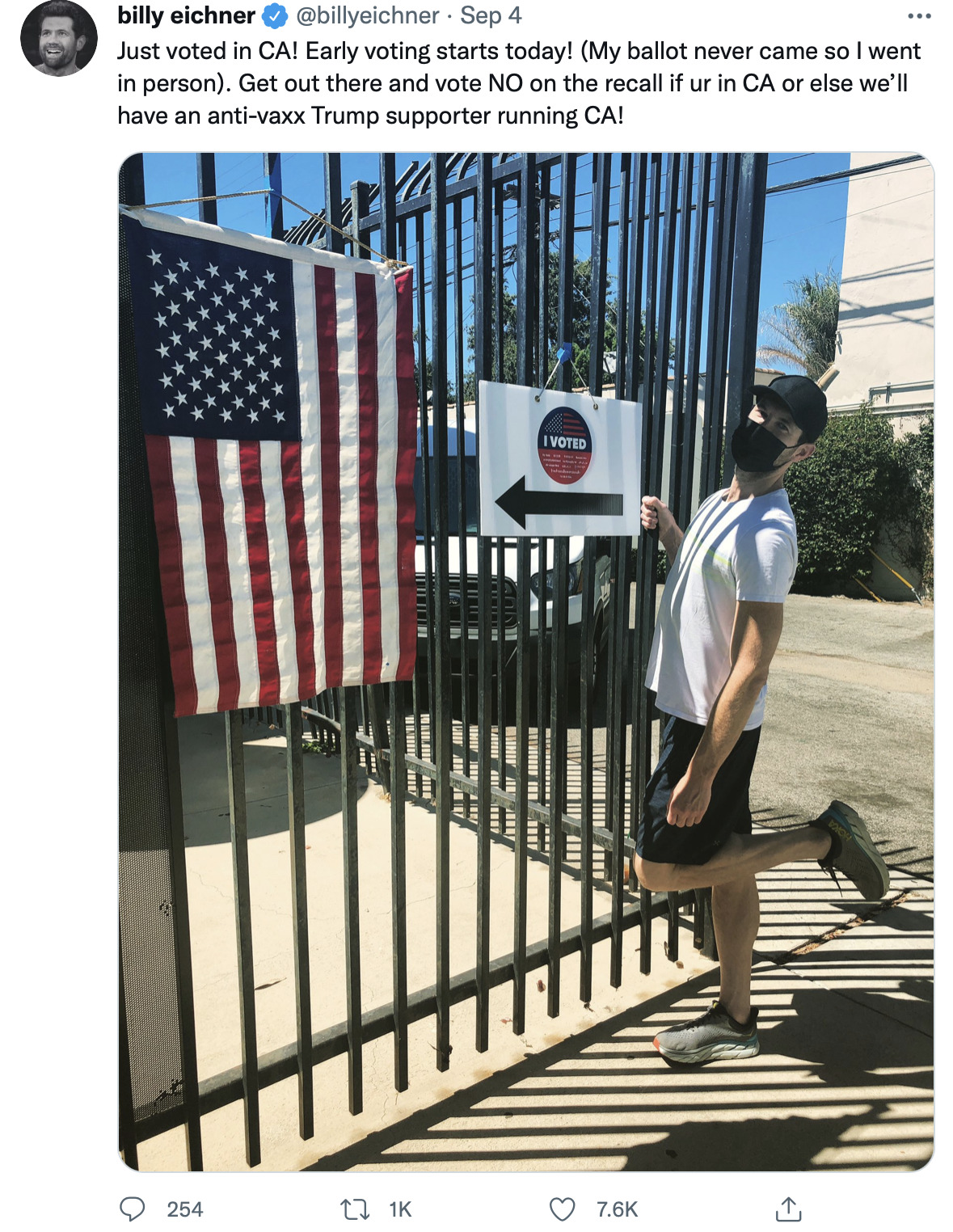 “California! You’ve got a big choice to make by September 14, and everything is on the line,” wrote former President of the United States and current Netflix producer Barack Obama. “Your vote could be the difference between protecting our kids or putting them at risk; helping Californians recover or taking us backwards. Vote ‘no’ on the Republican recall.” 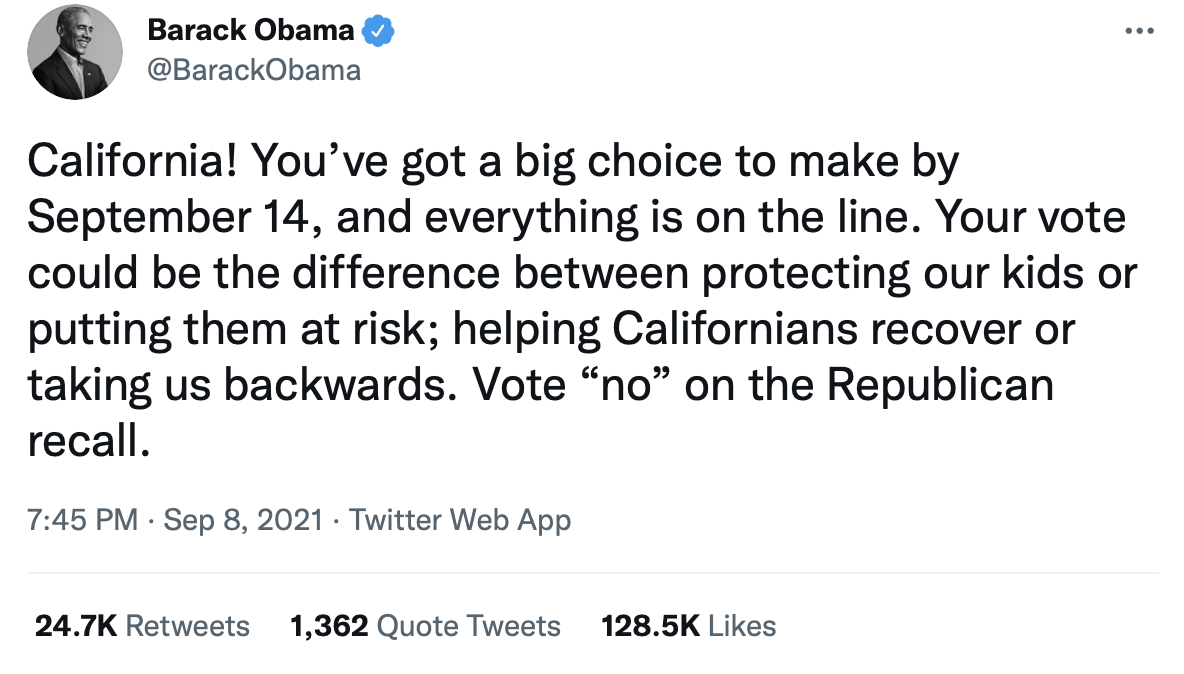 Sharing a tweet by President Joe Biden which read “Gov. @GavinNewsom is leading California through unprecedented crises—he’s a key partner in fighting the pandemic and helping build our economy back better. To keep him on the job, registered voters should vote no on the recall election by 9/14 and keep California moving forward,” Veep, Marvel, and Seinfeld actress Julia Louis-Dreyfus simply wrote, “Amen.”

The Woke was strong with Star Wars actor Mark Hamill, who also took to social media to promote his left-wing politics and encourage his nearly 5 million followers to vote “No” on the California recall election.

“Republicans spend $250+ MILLION in taxpayer’s money instead of waiting for the regularly scheduled election next year-Why? Because they can’t win in California based on their policies & must resort to gimmicks, voter suppression & phony, unfair recalls,” wrote Hamill. 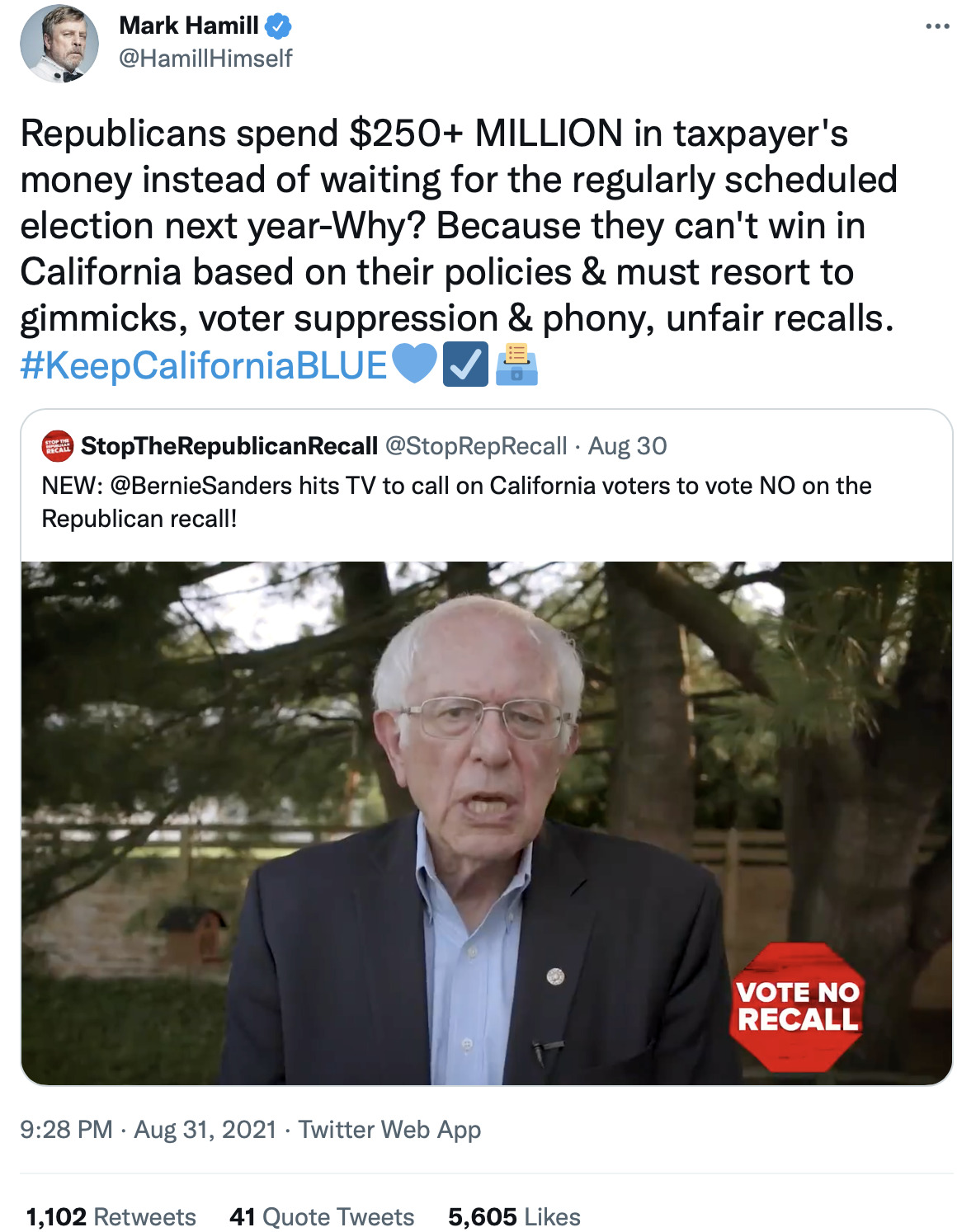 In voicing her opposition to Newsom’s recall, raging left-wing activist Alyssa Milano decided to throw the state of Texas into the mix – possibly fuelled by the recent passing of the Texas Heartbeat Act – by tweeting, “California! Here’s how to not turn into Texas—#VoteNo on the bulls—t recall,” and sharing an animated gif that read “Don’t let them recall our governor.” 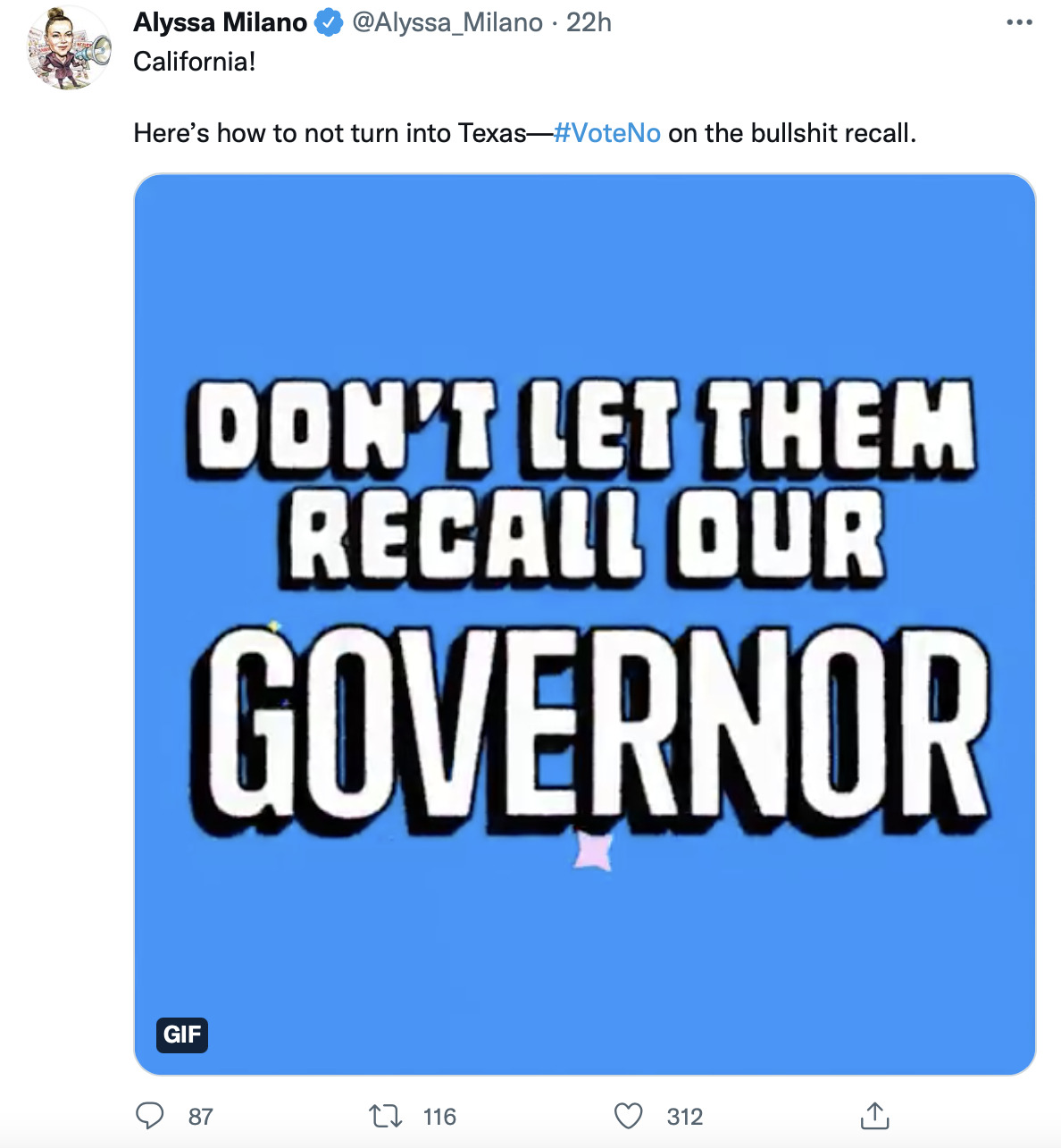 “September 14 is almost here CA. Have you voted NO Yet on #CaliforniaRecall?” asked actor and comedian Josh Gad, adding, “If not, please do so now. It will take every last one of us to prevent this catastrophe from happening.”

Singer and actress Bette Midler also chimed in, writing, “#CALIFORNIA, got your #recallballot? If you don’t vote NO, #LarryElder has a legit shot at winning. Remember him? The guy dumped by his fiancée because she says he threatened her with a gun? You have to all vote like hell because you know that just makes the #GOP love him more!” 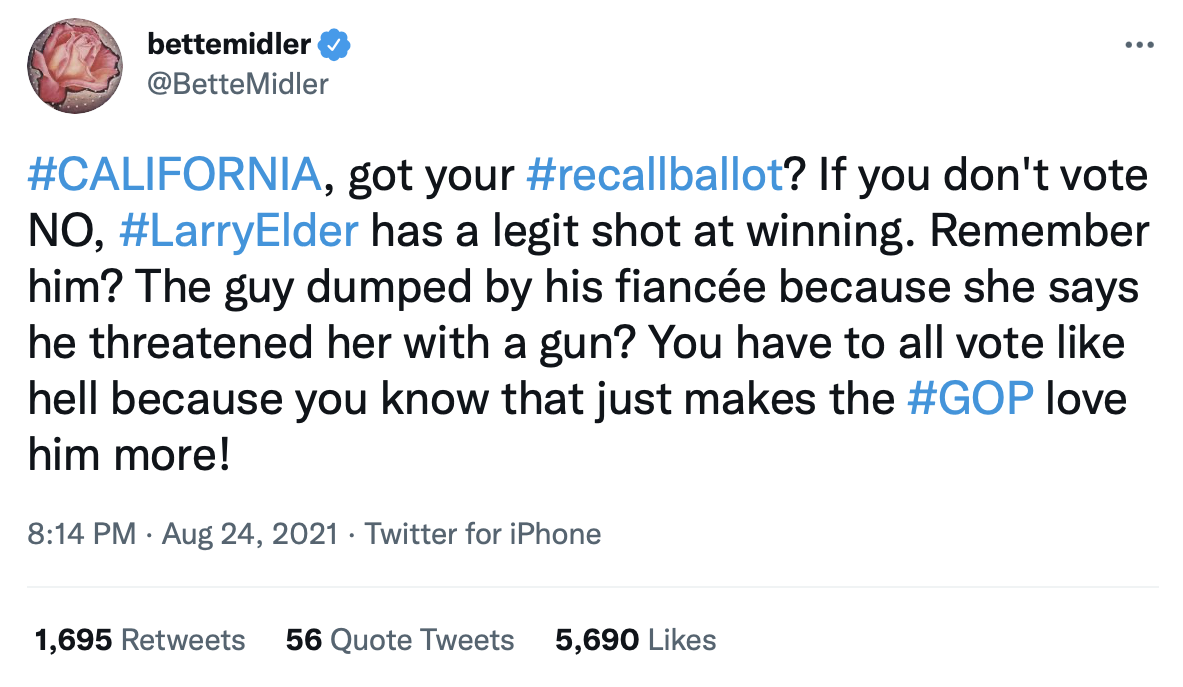 Midler had more to say in a follow-up tweet, further encouraging her followers to oppose California’s recall process.

“The #CaliforniaRecall has been a colossal waste of time & money. But it will only take you one second to vote “NO” & the stamp to send your ballot back is already paid for!” she continued, before randomly adding, “Seriously, it’s easier than flossing. Which you should also be doing but we’ll talk about that later.” 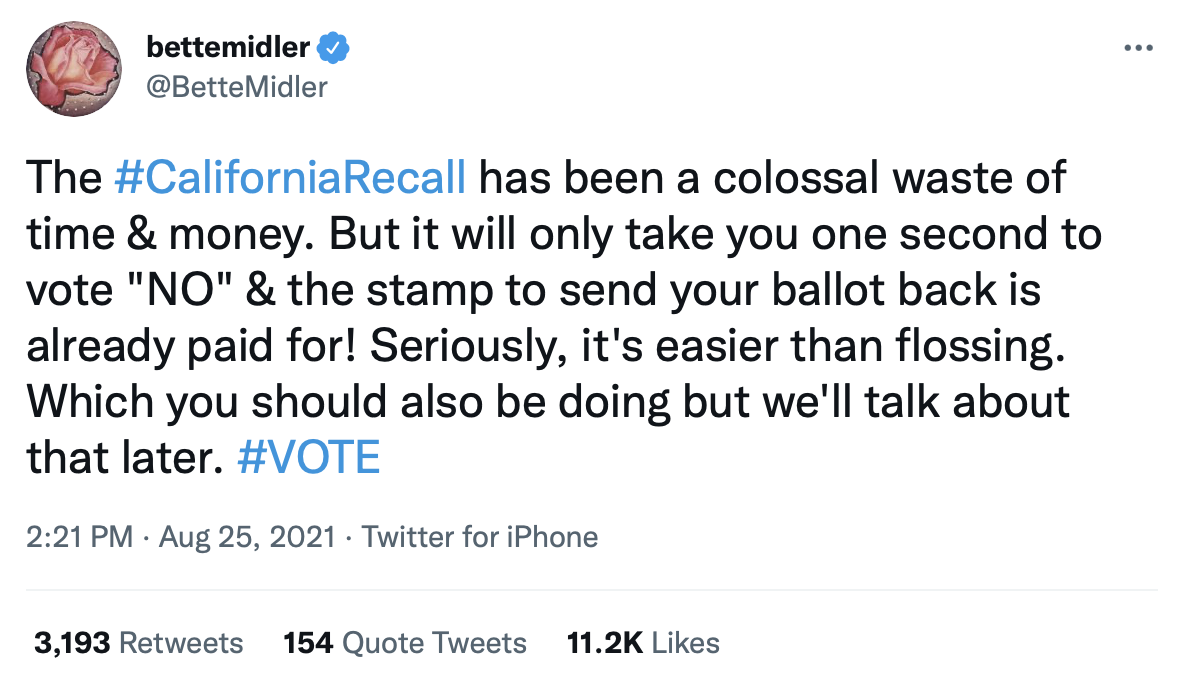 Sharing a clip in which he complained about the recall and even went as far as to compare the Republican Party to ISIS, Hellboy actor Ron Perlman wrote, “Vote NO on the upcoming recall vote. PS – f—k you, GOP,” 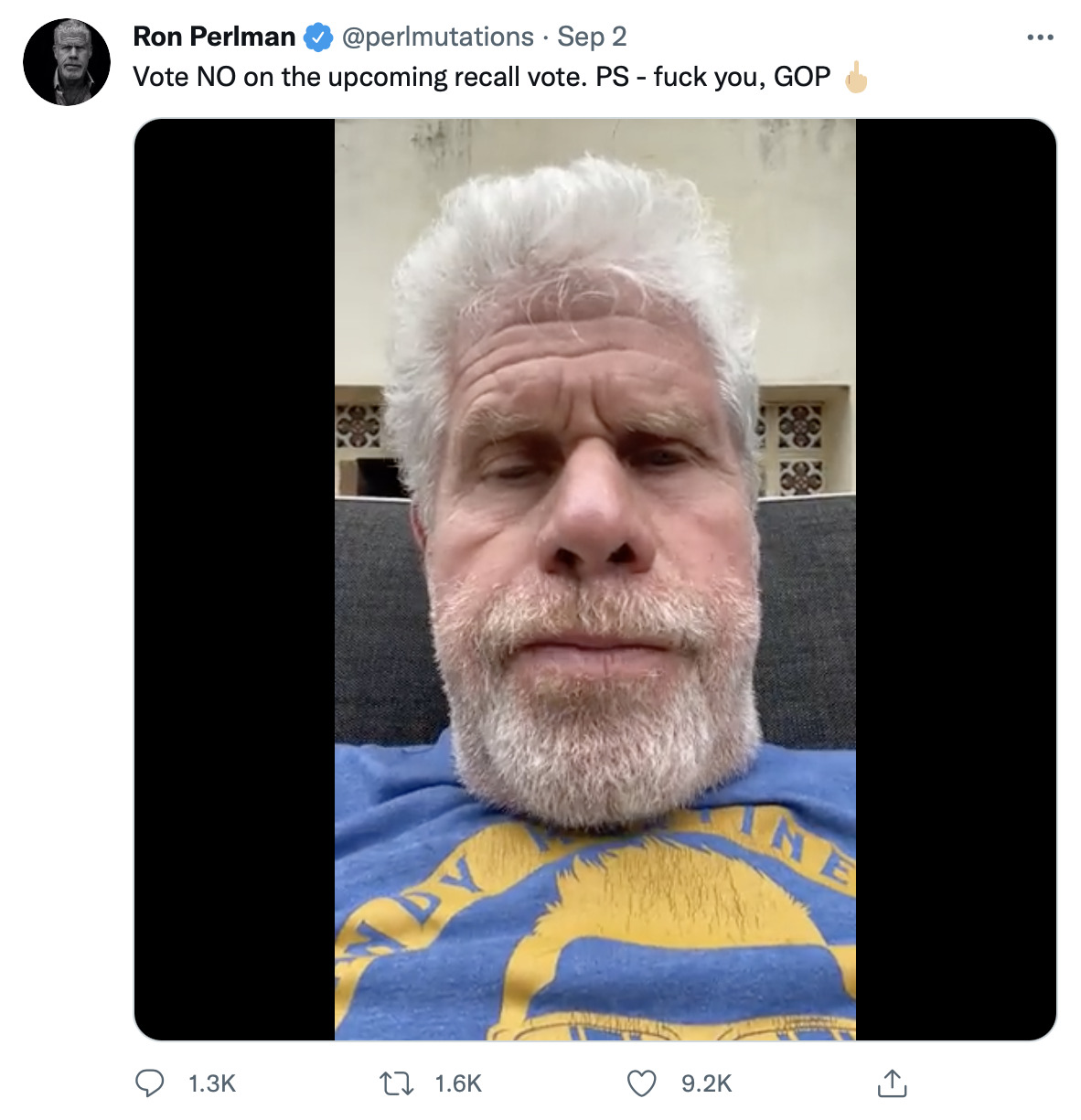 Mark Ruffalo, The Incredible Woke, has also been vocally opposing the California recall election, concerned with the fact that Republican candidate Larry Elder could be installed as governor of the blue state.

“Californians, vote NO on the recall by Sept. 14!” the actor demanded. “It’s a sly attempt by Trump allies & anti-union special interests to install a right-wing Republican as governor. When you get your ballot in the mail, #VoteNoRecall and return it promptly!” 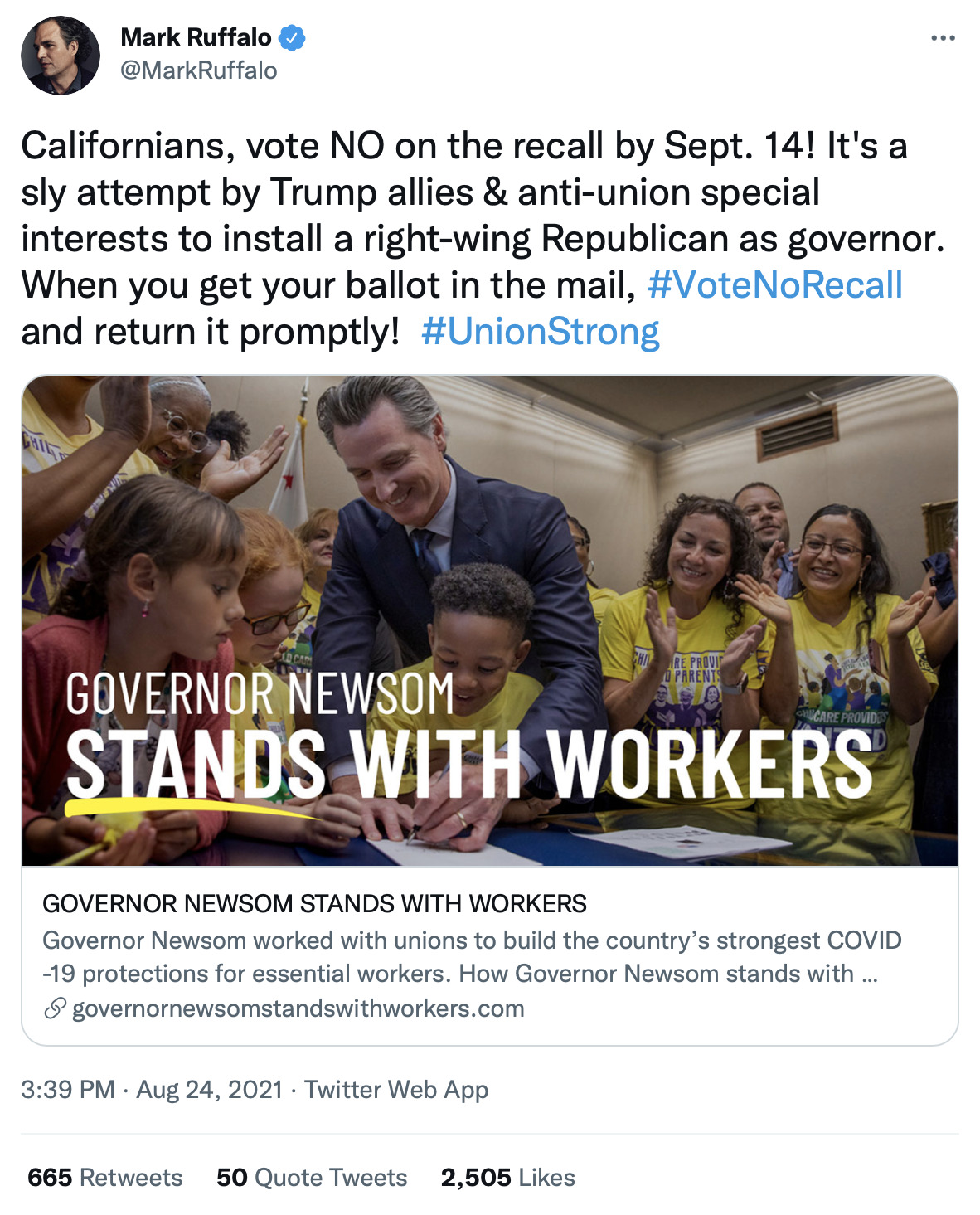 Wrestler-turned-actor Dave Bautista wrote, “This is even bigger than California. The ReTrumplicans are doing everything they can to overturn elections that don’t go their way. As if Gerrymandering isn’t enough.”

“They’re aggressive, they’re desperate and they have no bottom,” the actor ironically added. “Don’t let this happen!” 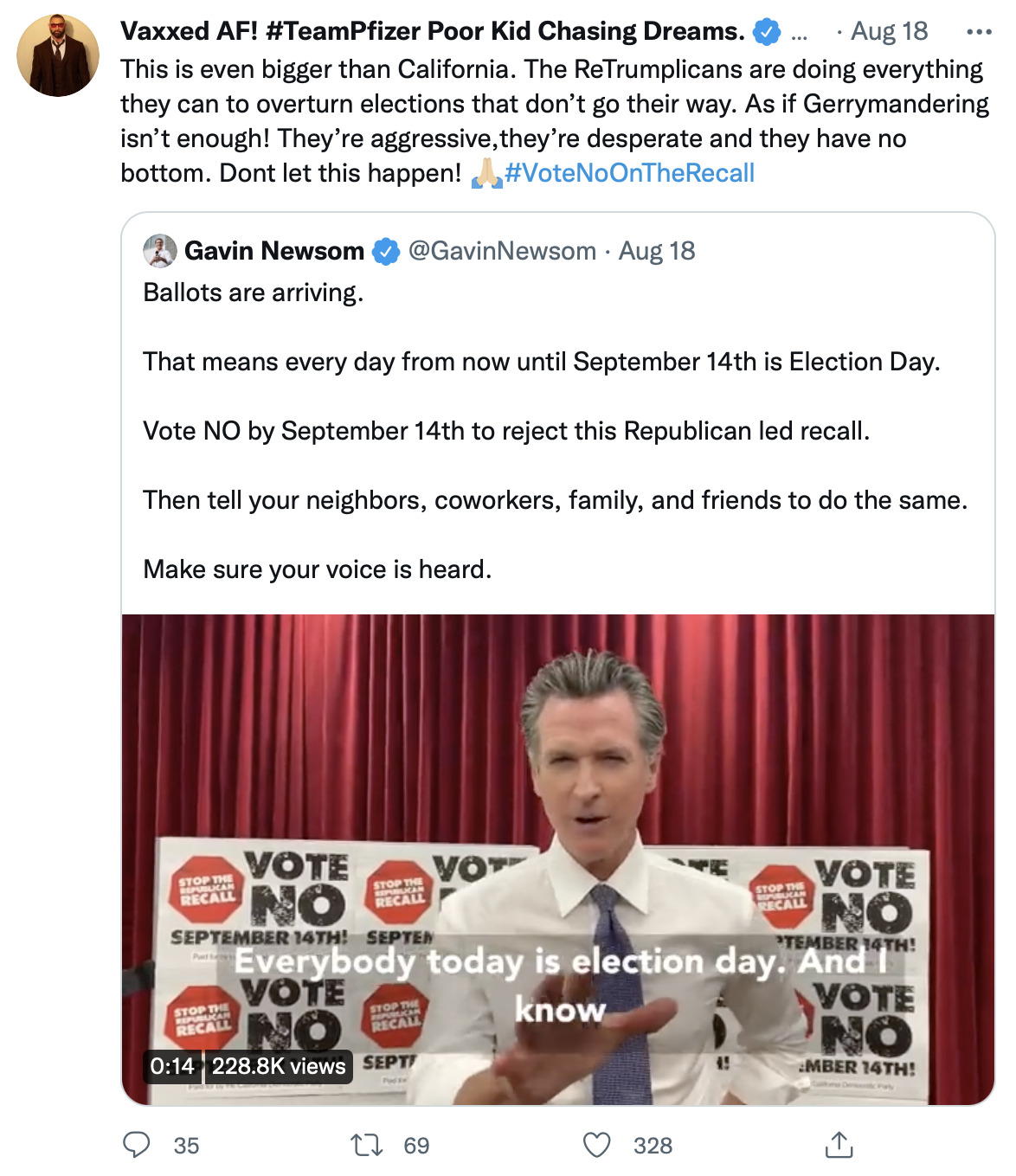 Woke Hollywood elitist Alec Baldwin also took the time to encourage Californians to vote “No” on the recall, writing, “Is California on the verge of recalling another struggling yet capable Governor with another opportunistic phony who has the political depth of a bottle cap? California’s recall laws are preposterous, even danger.”

As if it wasn’t clear who he meant to insult with his previous statement, Baldwin made sure to let his 1 million followers know that he was referring to Elder, adding, “Larry Elder is a dangerous idiot. And I mean Trump level dangerous. Vote NO on the recall.”

As of writing, the most recent celebrity to oppose the California recall is none other than Star Trek’s George Takei, who asked his fans and followers not to disappoint him by letting Newsom be unseated by a Republican candidate.

“Newsom supporters: If that ballot for California’s recall is still sitting on your counter unmailed, you are disappointing me,” wrote Takei. “You don’t want to disappoint me, do you? Vote No. Do it today if you haven’t done it yet. No excuses!”

It is also worth mentioning that Elder was recently attacked by a far-left activist wearing a gorilla mask, throwing an egg that barely missed the Republican candidate’s head.

As of this writing, none of the celebrities mentioned above have neither condemned nor addressed the cowardly and seemingly racist attack, which is quite hypocritical, considering that these are the same celebrities that have actively supported the #BlackLivesMatter movement in the past.

Breaking: A flying egg narrowly missed the back of recall candidate @larryelder's head after it was thrown by an activist wearing a gorilla mask in Venice. A scuffle broke out and the candidate was escorted into an SUV.

What do you make of these woke Hollywood celebrities fervently pushing their followers to oppose the recall effort to unseat California Governor Newsom? Be sure to let us know your thoughts in the comments section down below or on social media.