Shang-Chi actor Simu Liu recently responded to reports that the film will more than likely not release in China following resurfaced comments of him criticizing the Communist rule of China.

If you recall a Chinese organization called Diba posted screenshots from a CBC interview of Liu that was published back in 2017. In those screenshots, Liu discusses that his family, who came from China “lived in the Third World.” 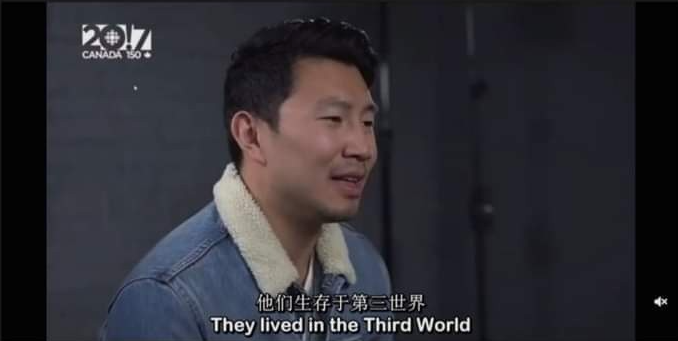 He also noted that in China “you have people dying of starvation.” 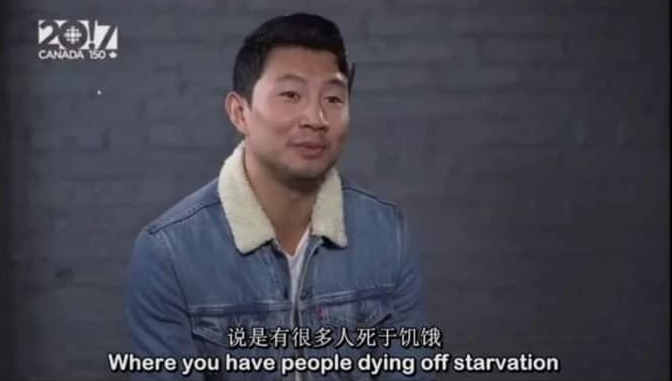 The Shang-Chi film was already on rocky ground when it came to release in China as a report from May by Variety’s Rebecca Davis noted the film had been omitted from a list for the upcoming  Marvel Cinematic Universe’s Phase Four films. 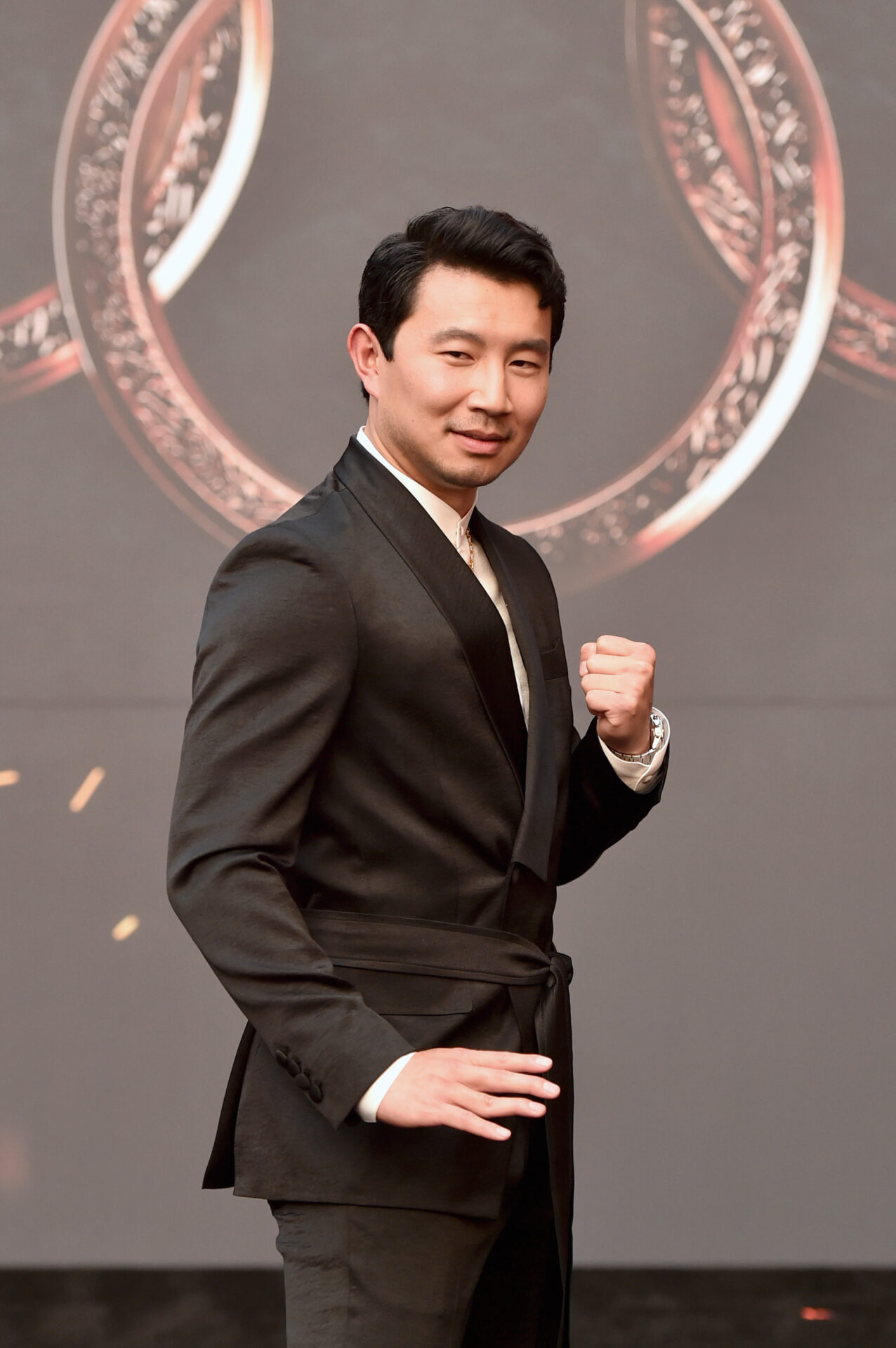 Not only was the film unlikely to get a release back in May, but CNBC reported at the beginning of September that Shang-Chi “is the first Marvel movie that has not been approved by the Chinese government for distribution in the country.”

The reason for Shang-Chi reportedly not getting a release in China is the depiction of the character’s villain, Wenwu, played by Tony Leung. CNBC reports “the comic books on which the film is based has been considered racist and filled with reductive stereotypes.” Wenwu is a mash-up of Marvel villains The Mandarin and Fu Manchu.

Captured by Twitter user SpoilerPleaser, Liu wrote, “What western news often fails to report on is the absolute groundswell of support that we’ve received from all parts of the world – including people from China!”

He continued, “All around us, media narratives are polarizing us and turning us against each other, but I have seen the kindness and the empathy that all people possess. And I know that we have fans from all over the world who cannot wait to watch our movie and make history with us!”

“Whether you seek positivity or toxicity on social media… you will find it,” Liu stated.

He concluded, “Thanks to all Marvel fans in China and all around the world! We love you!!” 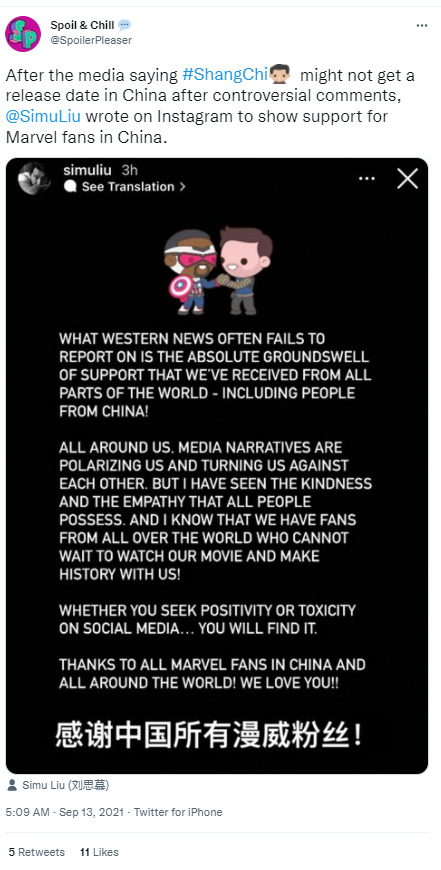 While Liu is right in his assertion that media narratives are polarizing people in the United States, the actor has engaged in participating in them and in my opinion making that polarization even worse.

Back in June 2020, Liu joined the wave of activists and celebrities calling for the defunding and the dismantling of police.

He tweeted, “Over the last few days I went from empathetic and sad to just plain angry. Defund it. Defund it and make way for a new system that doesn’t prey on the lives of the underprivileged.”

He then claimed the structure of the United States is based on “systemic racism.”

First he shared a DM conversation with his parents, where he wrote, “Super proud of my parents for watching the YouTube video I sent about systemic racism and also proactively educating themselves!” 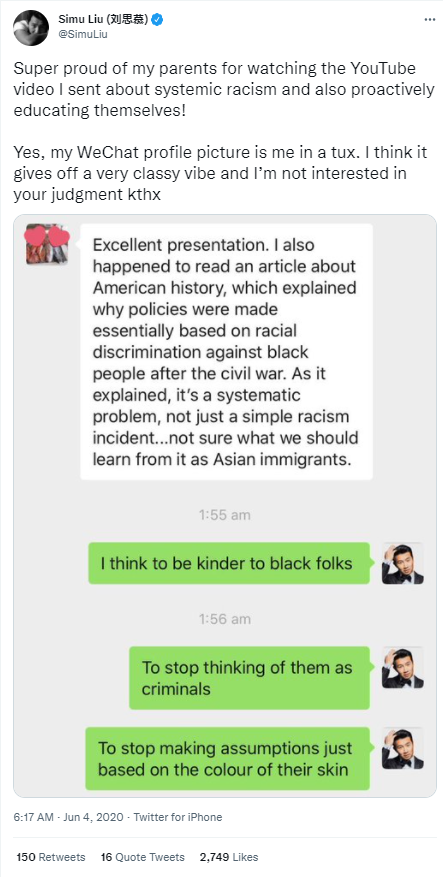 Liu then shared the the video which is a four and half minute video from act.tv titled “Systemic Racism Explained.” 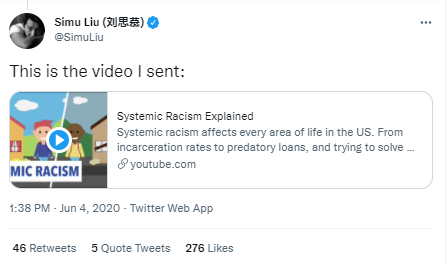 In a now deleted tweet, Liu went so far as to want officers disciplined for just smirking.

He tweeted, “THE BAR IS SET TOO GODDAMN LOW. Officers should be discipled for the SLIGHTEST abuse of force and power. They should be disciplined for every punch, kick, swing of a baton, or SMIRK that was not ABSOLUTELY necessary.”

He finished up the tweet, “A SYSTEM THAT CONDONES ALL OF THIS IS BROKEN.” 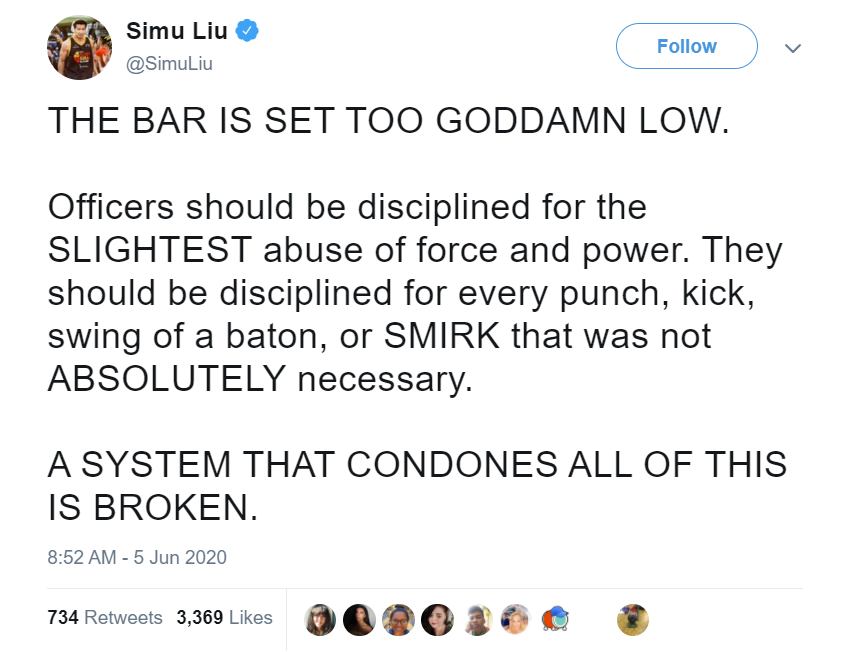 He would then proceed to double down on his stance about completely changing the criminal justice system by comparing it to Spider-Man.

He wrote, “Just remember, we had to reboot Spiderman a few times to get Tom Holland. We can reboot the criminal justice system too.” 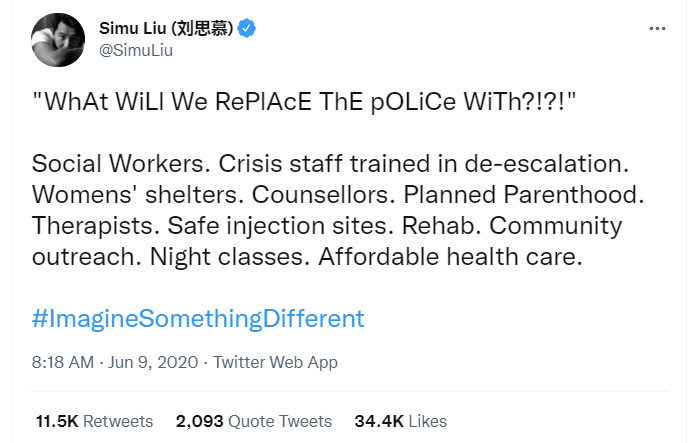 Not only did Liu engage in the extremely polarizing “media narrative” of defunding the police, he also engaged in Marvel Studios’ combative marketing for Shang-Chi by claiming that there were no Asian characters that were aspirational before Shang-Chi.

He told Total Film, “It’s a beautiful and exciting new origin story for this character that a lot of the world hasn’t heard of before. And it means that kids growing up today will have what I didn’t, which are characters that are aspirational, that also reflect their lived experience.”

The absurdity of this comment is too obvious. The film is literally an adaptation of Marvel’s Shang-Chi character. The character first appeared in Marvel Comics’ Special Marvel Edition #15 back in 1973. But kids never had aspirational characters apparently. Talk about a “media narrative” meant to polarize people. 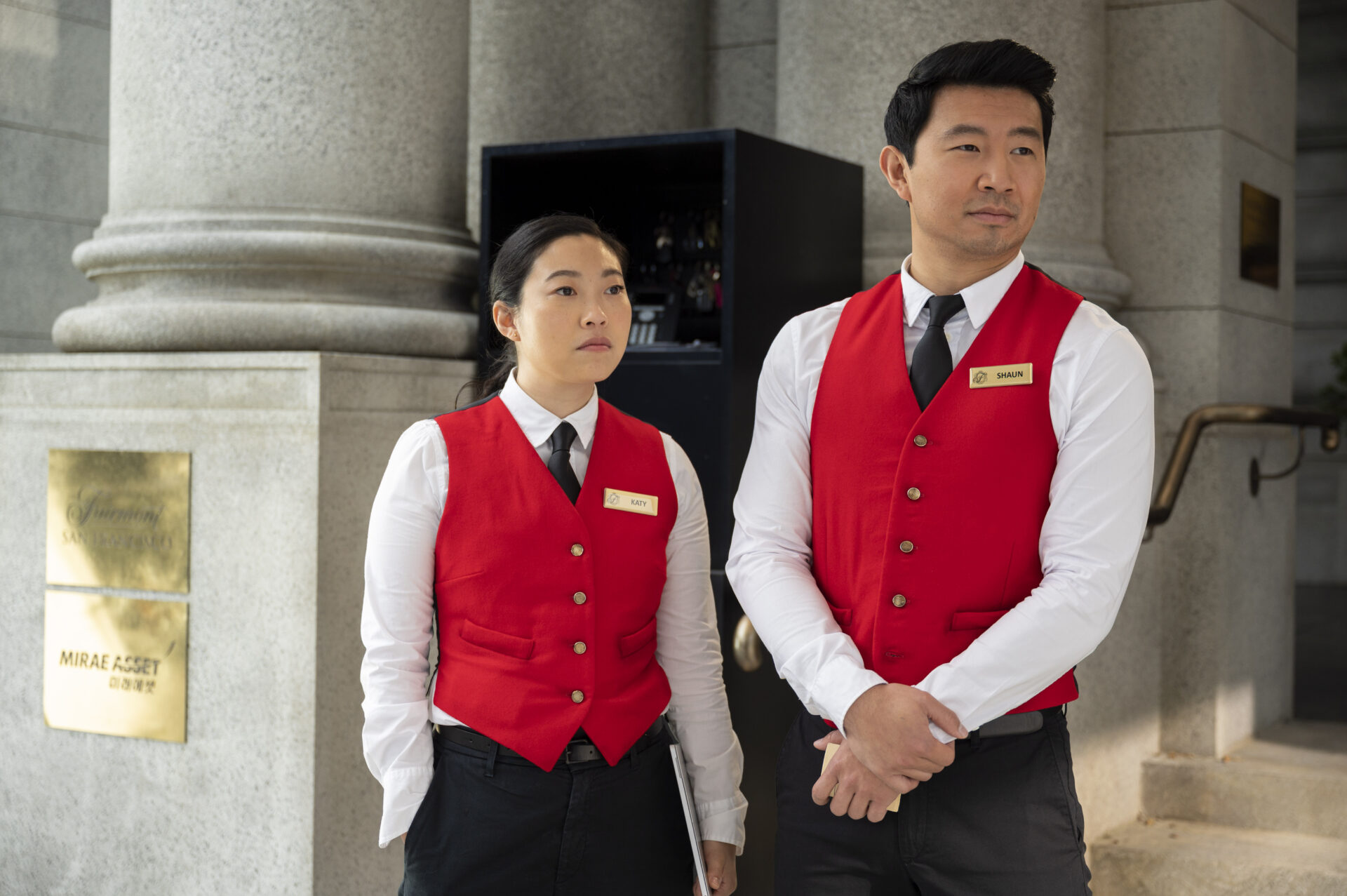 Related: Shang-Chi’s Simu Liu Claims “I Thought Playing A Guy That Gets Beaten Up By A Main Character Was The Pinnacle” For Asian Actors

He would double down on this combative marketing by claiming he thought the pinnacle for actors that look like him was being “a guy that gets beaten up by one of the main characters.”

This statement is also complete and total hogwash as there are numerous Asian characters that weren’t merely the “guy that gets beaten up by one of the main characters.” One can look back to the 1970s to see that. Bruce Lee starred in Enter The Dragon in 1973 where he was doing the beating up.

So, it’s pretty clear Liu’s recent comments are first off hypocritical. But not only are they hypocritical, they are a complete and utter virtue signal. And dare I say, they are part of a “media narrative” to try and get the film into China.

What do you make of Liu’s recent comments?