Ahead of the launch of their indie game social app, Game Jolt has announced that they will not be hosting pornographic games, a development which has led to outcry among users and a subsequent number of insulting responses from the company.

Originally focused on Flash, Unity and Java games, Game Jolt has acted as an indie-game-hosting social community platform since 2008, evolving in recent years to allow any game that supports HTTP operations and MD5 or SHA-1.

A Discord-esque service, The Game Jolt Social Communities app is currently in open beta on the App Store and Google Play, promising users the ability to join over 40,000 gaming communities, both user-created and official, as well as share fan content and follow specific content creators. 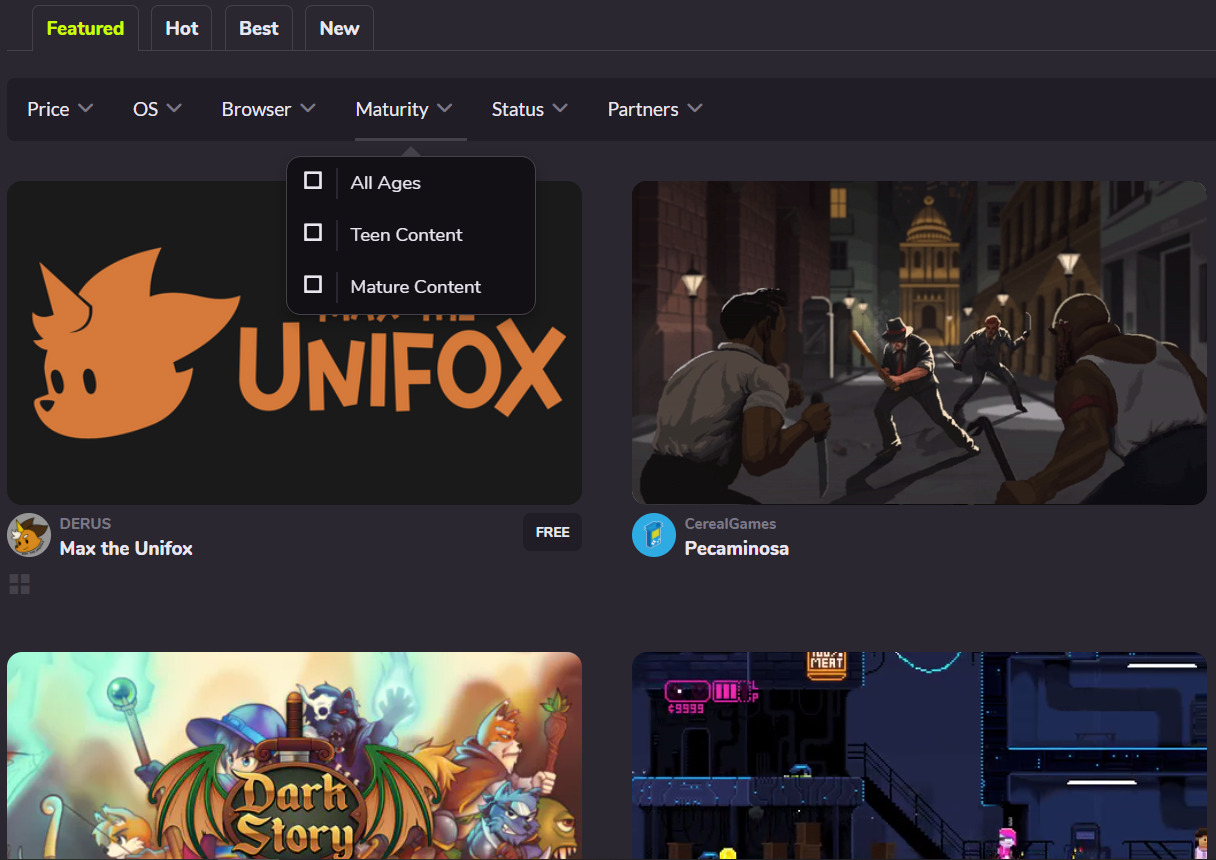 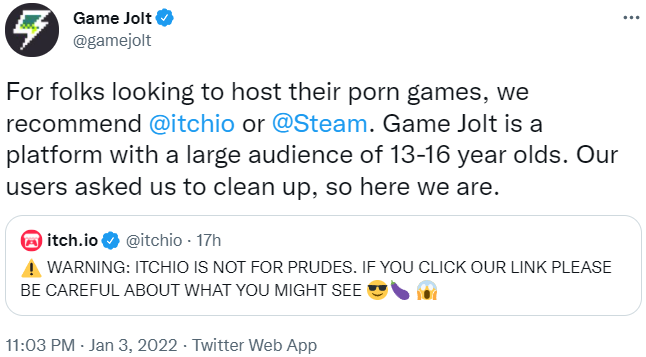 Some users doubted if it was truly users who had requested this, with many suspecting Visa and Mastercard as having made such a request – just as they had been accused of doing with Tumblr in 2018.

Others speculated that the change had been made in response to demands made by one of the numerous parties who helped the company raise $2.6 Million during their recent IPO.

Nonetheless, fans would have merely continued to debate why Game Jolt did what they did- in spite of the website having a mature tag – but like lightning striking gasoline, Game Jolt’s replies only served to made things worse.

The backlash began when a number of players and developers began bringing attention to several games that had been removed under this new policy.

One title, F2OGGY, was removed on the grounds that it “depicts, solicits, promotes, normalizes, or glorifies sexual acts, sexual solicitation, and sexual violence”, despite the game being about, as creator Natalie Lawhead put it, “the last two surviving frogs fighting for the last plot of land after humanity destroyed the world”. 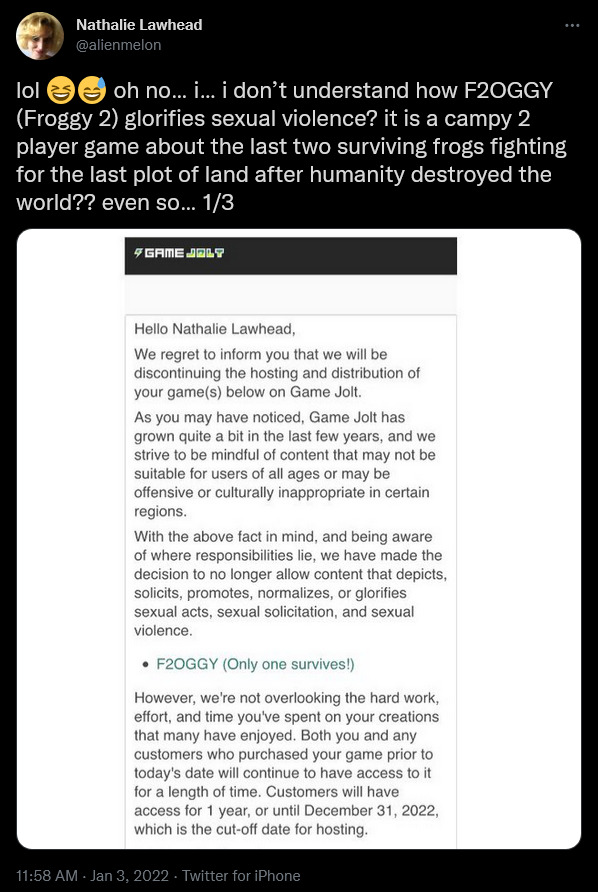 In this case, shortly after Lawhead brought the issue to their attention, Game Joly took note and restored F2OGGY to their service.

Another removed game was Curtain, a game about an abusive relationship between two queer women whose Itch.io page clarifies, “Nothing is explicitly shown, it’s all done through conversation, but it can be intense.” 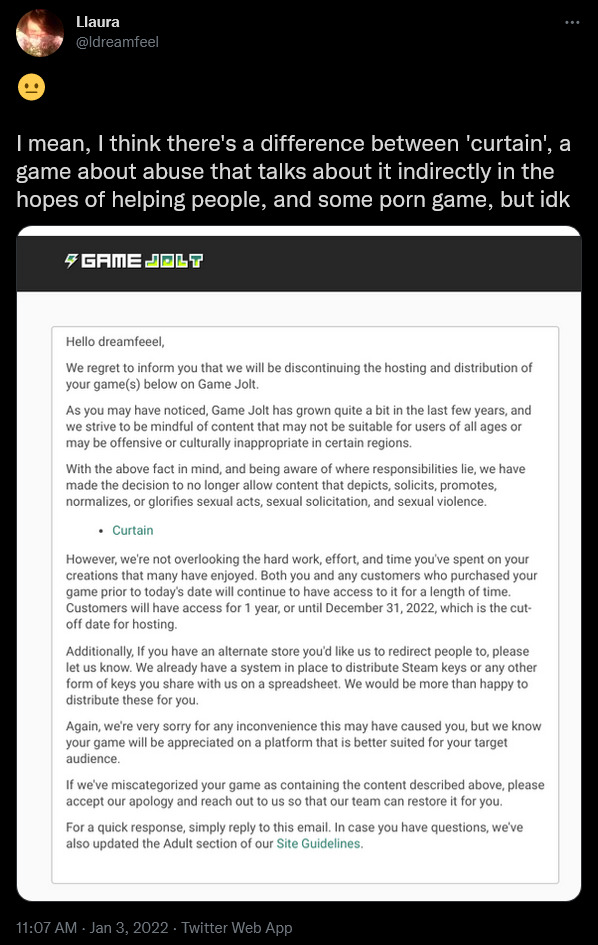 RELATED: China Bans “Sissy Men And Other Abnormal Esthetics” From Appearing On Television In Order To Promote “Revolutionary Culture”

“How do we know that you didn’t purge 20 other games in a similar vein,” Twitter user Mithaldu asked, “and only respond to this one because it got twitter likes?” Game Jolt’s response was surprisingly frank, and could be deemed by some as a little snippy.

“It’s possible that we did,” Game Jolt admitted. “That’s why we included the below in our messaging. ‘If we’ve miscategorized your game as containing the content described above, please accept our apology and reach out to us so that our team can restore it for you.'” 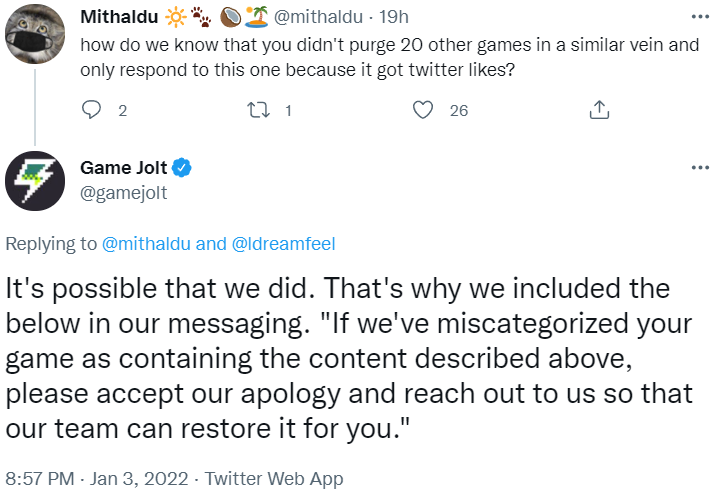 Up to that point, Game Jolt had been accommodating in helping erroneously removed games get back on the platform. The developer of THOSE DARN NIPPLES tweeted that his game was removed, despite being made in a “protest game jam about making games themed around breasts without sexualising them.” An ostensible screenshot from the game shows it was hardly titillating.

Yet, Game Jolt publicly welcomed the developer to go find themselves another platform to upload the game to. “Hey sounds awesome, you should upload to @itchio or @Steam as we’re a platform with a large audience of 13-16 year olds that have requested we remove these types of games from our platform.” 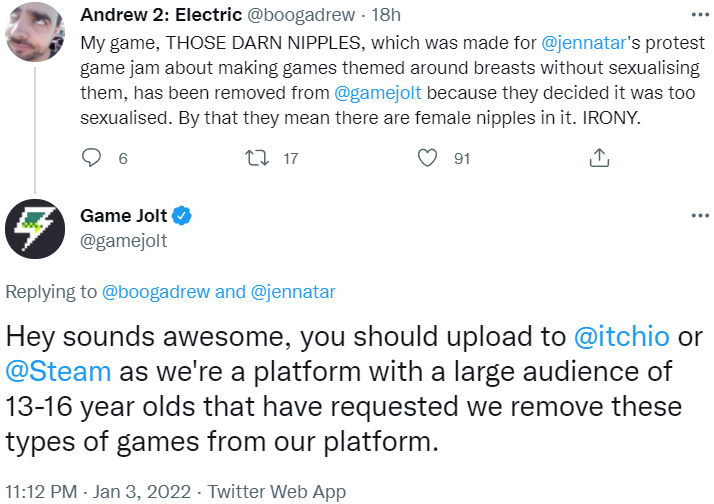 As more users began to doubt the existence of these supposed 13-16 year olds, the wheels started to come off of Game Jolt’s wagon.

While some were encouraged to appeal if they felt their games were “miscategorized,” others were similarly told to find a different platform – or in some cases, simply received a sassy response [1, 2, 3, 4, 5, 6].

“Like, what you on with?” they asked. “We have following ur rules so what happen to you today on cocaine? but thanks for telling us know about this website of itch.io.”

Game Jolt took the opportunity to promote a rival. “itch.io is great! If your game has been miscategorized, email in and we’ll help restore it.” 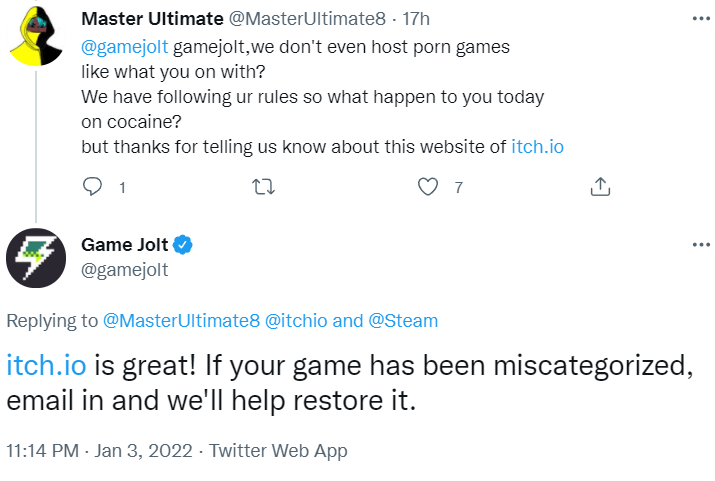 Once again, Game Jolt stated “If you believe your game was miscategorized, email us and we’ll look into restoring your page for you.” 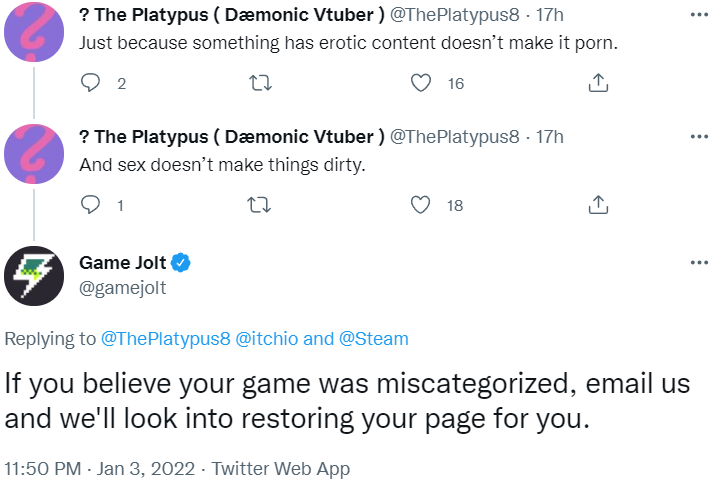 “You get it, girl!” Game Jolt replied, this time with a GIF. 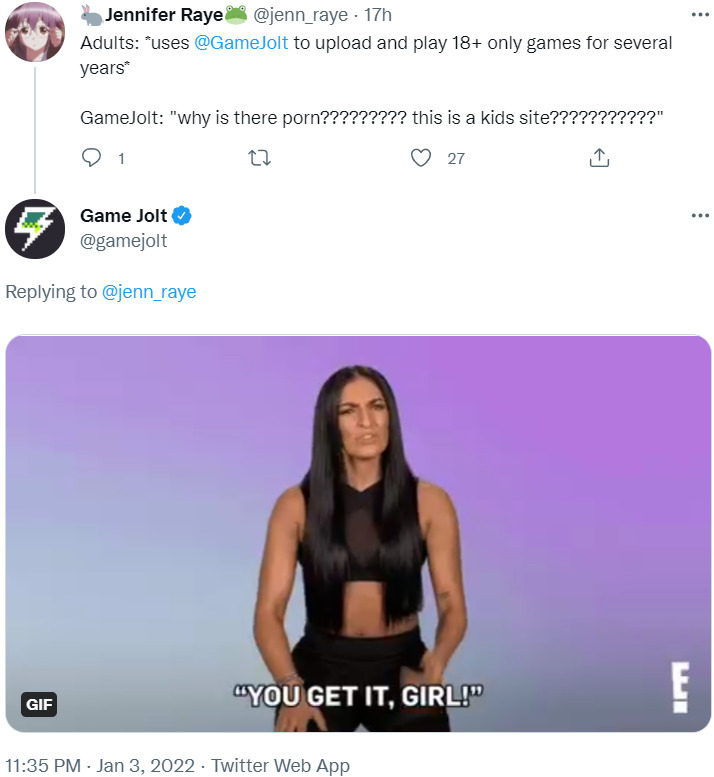 Raye also speculated that the change was due to Game Jolt’s upcoming app.

In a rather sarcastic manner, Game Jolt explained in reply, “Pssst… the app doesn’t host any games on it. Like, at all. It’s literally a social app for socializing.” 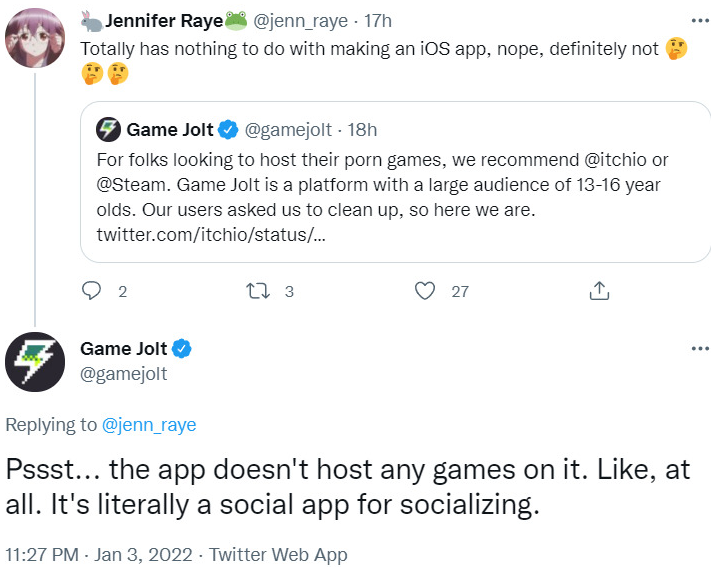 Nega Candle asked the community at large “how old were you when you found out that game jolt was a workers co-op owned by 13-16 year olds.” 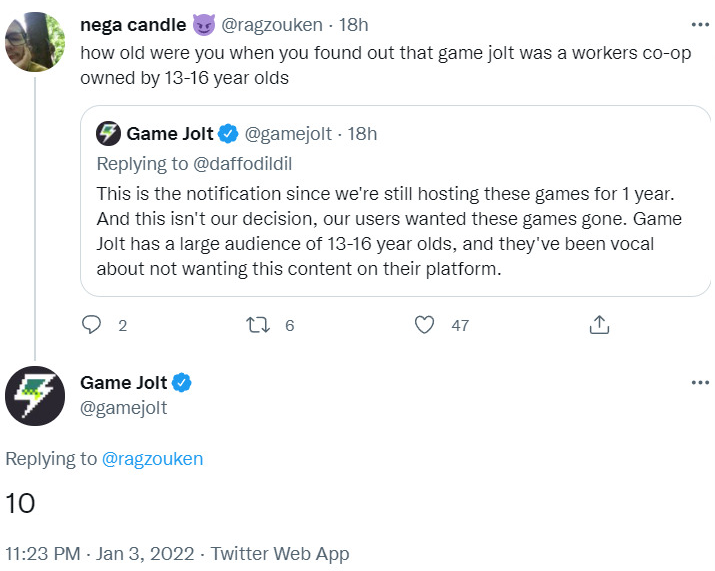 Even users who later deleted their comments were met with sassy .gifs of “girl same” by Game Jolt. 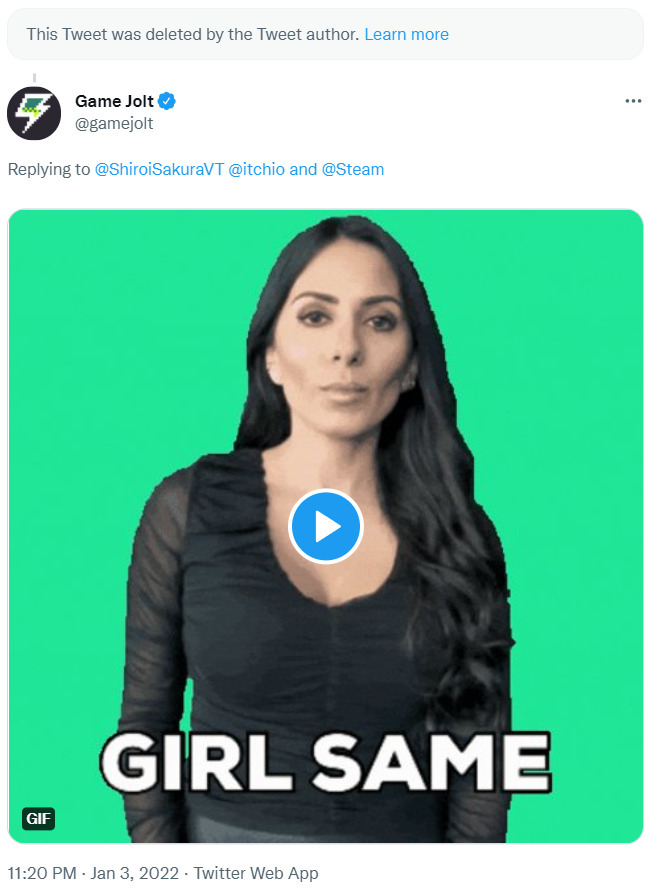 Game Jolt even admitted an adult content filter would work, but only  if adult users made up the majority of their platform.

Daffodil proposed “All i can say is that if you really believe this then you best be engaging with the nuance of what people are criticizing you for with this recent wave of unnotified [sic] game takedowns, as that will make queer people feel way more heard than rainbow-washing my twitter thread will.”

“This is the notification since we’re still hosting these games for 1 year,” Game Jolt noted. “And this isn’t our decision, our users wanted these games gone. Game Jolt has a large audience of 13-16 year olds, and they’ve been vocal about not wanting this content on their platform.”

Oma’s House then proposed “an adult content filter would work wonders in that case. or maybe a ‘kids’ account like Netflix if they’re that concerned, and not just some made up excuse.” 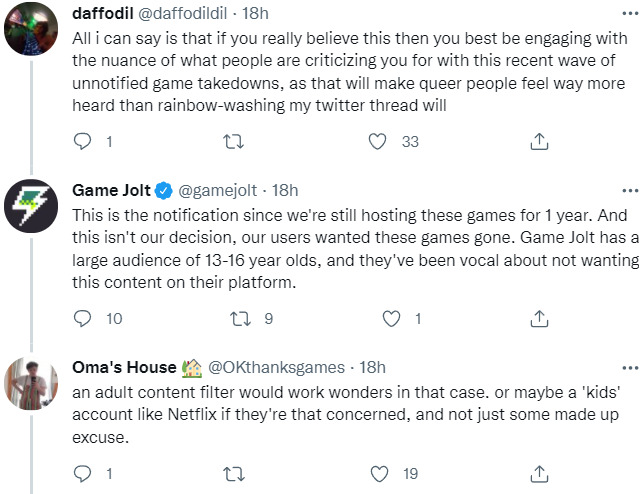 Meca56 then demanded to know “THEN WHY DIDN’T YOU DO THAT IN THE FIRST PLACE YOU PURITAN T–TS.”

“Because we wanted to be absolutely sure,” Game Jolt replied. “Now we are.” 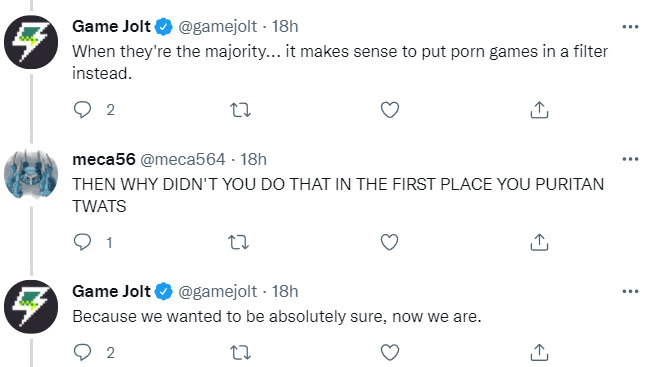 “Just gotta say. this is a really chaotic way to go about running a business,” Oma’s House opined. 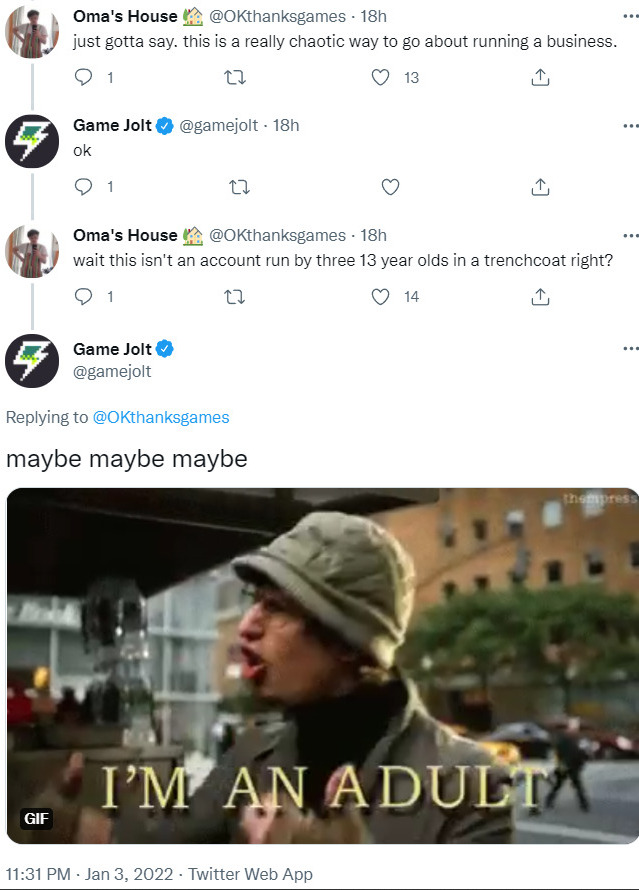 Even replies to developers who’s games had been reinstated were soon devolved into pithy comments.

Replying to Game Jolt’s earlier comments to Daffodil, McGee tweeted “this is disingenuous at best as the game was not accessible at all expect to myself when logged in when it was taken down.”

“You would just get a 404. so I assume it was only accessible to users who had bought it etc. […] So many brilliant and important games are taken down now, and many developers if they even see the message aren’t bother to fix it. eg, jack king spooner’s games,” they added.

“They’re not taken down though…” Game Jolt replied. 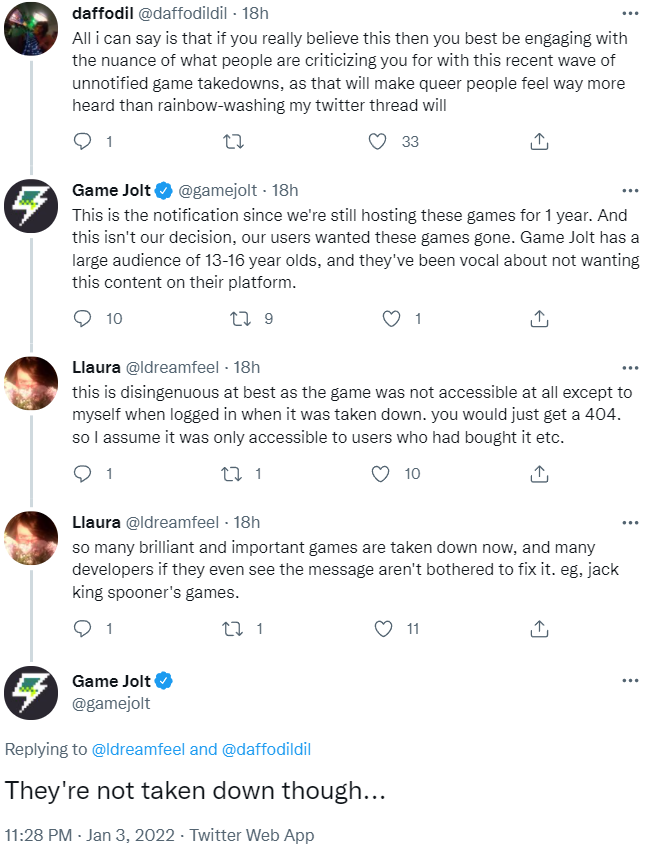 Did Game Jolt handle the situation well? When giving news some won’t like, are you better to keep your head down, or teasing those who are mad about it? Let us know on social media and in the comments below.