In a recent video posted on his personal Instagram account, actor Alec Baldwin has once again opened up about the tragic incident on the set of Rust that ended the life of the film’s director of photography, Halyna Hutchins, and injured its director, Joel Souza,

As seen in the recorded message, Baldwin has not only admitted that the event was “the worst situation I’ve ever been involved with,” but has also claimed that “No one wants the truth more than I do” in regards to the killing of Hutchins.

“Somebody died very tragically and I’ve gotten so much goodwill from people. It’s just incredible,” the actor declared, completely hiding the fact that Hutchins didn’t just die “very tragically,” but was killed.

Making clear that he is not a New Year’s resolution kind of person, Baldwin then admitted that he wants to make some changes in his life in order to stop negativity from affecting him, disclosing that he’s had some phone calls with people that are helping him reach that goal.

“I’ve been having some very interesting phone calls with some very interesting people who I will not name, but some of them rather well-known people who deal in all kinds of behavioural, philosophical, religious, spiritual, meditation — all kinds of ways to attain a state of mind where you really short-circuit a lot of the negative in your life. And that’s what I want,” Baldwin asserted. 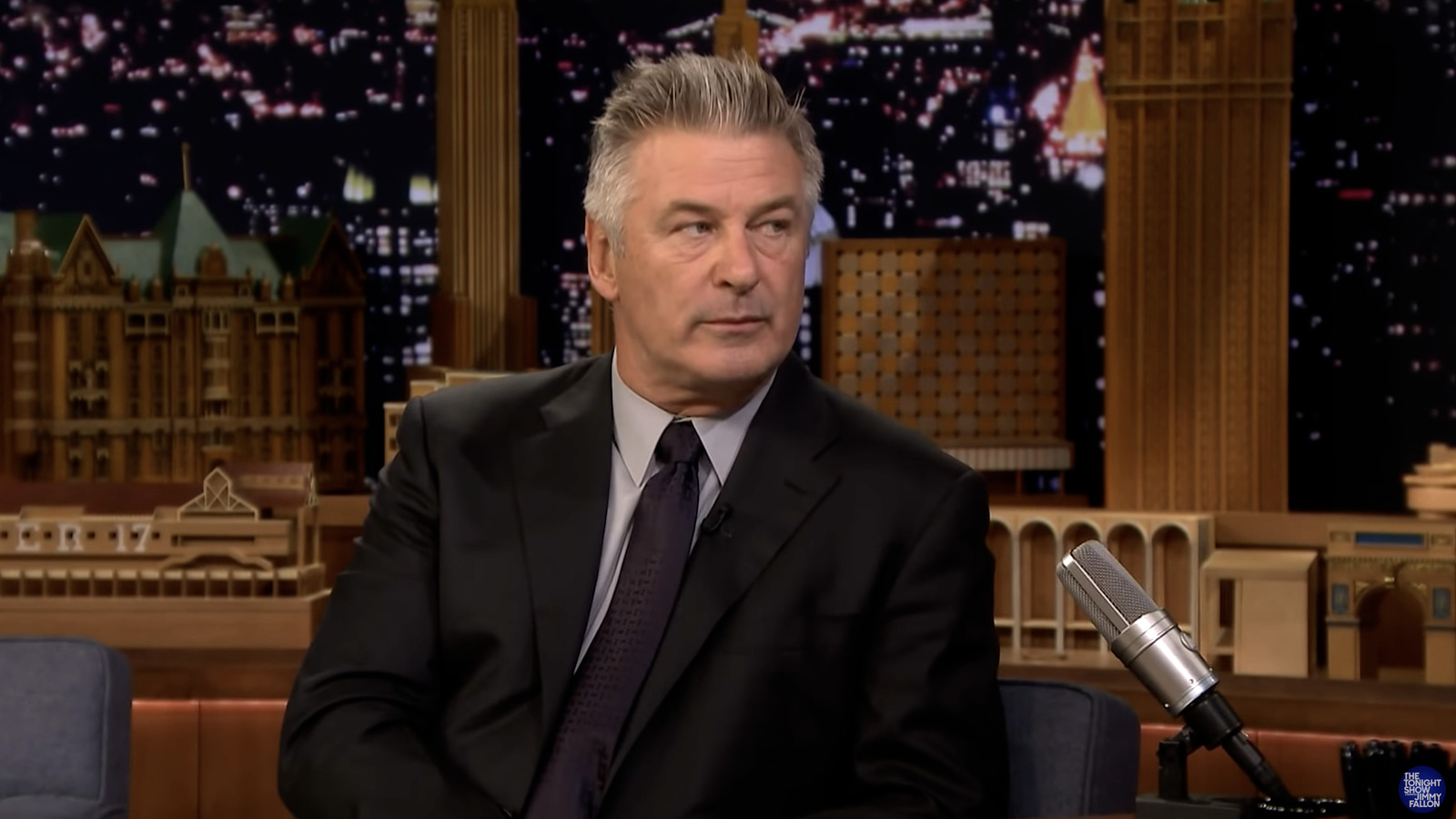 He continued, “This has been surely the worst situation I’ve ever been involved with, and I’m very hopeful that the people in charge with investigating this whole thing get to the truth as soon as possible,” further noting, “No one wants the truth more than I do.”

“My goal in the new year is peace, awareness, consciousness, deepening my relationships with the people that I love, pulling them closer to me, and improving relationships with people who I care about but maybe I don’t get to see much of them anymore.” 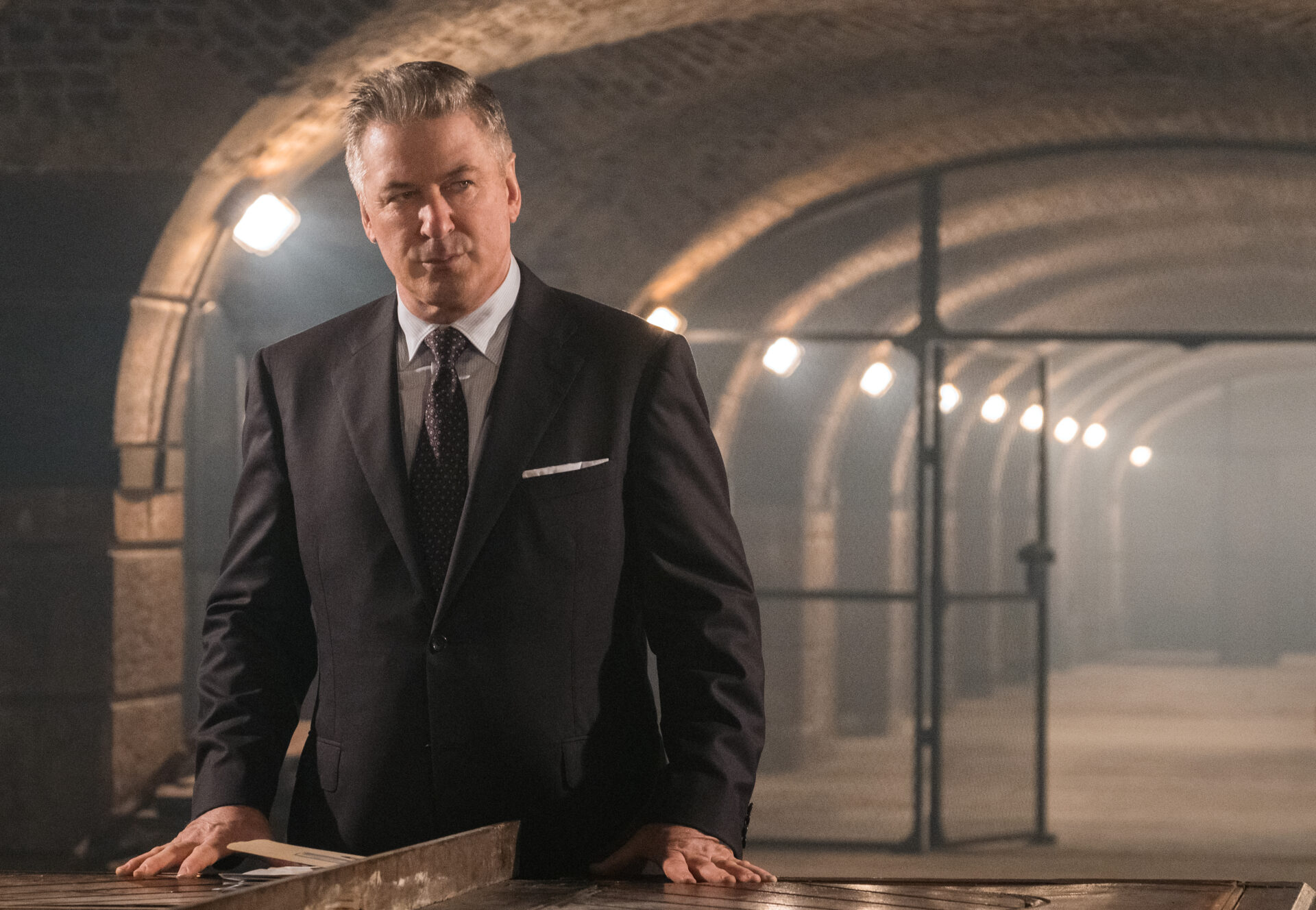 Alec Baldwin’s wife, Hilaria, has also seemingly had a sudden change of heart, sharing a family photo on Instagram and encouraging others to “dedicate this year to kindness” because “kindness nurtures others and the world we inhabit and leave to our children,” stating that “2022 is going to be flawless.”

Hilaria also spoke out against online bullying, apparently forgetting Alec’s own lengthy history of denigrating right-wingers, stating that she had “been given good info that there are actually very few trolls” that are “loud, create many accounts, and go out of their way to be mean.”

Though both Alec and wife Hilaria are hoping for this new year to be better than the last, things may still take a turn for the worse for them. 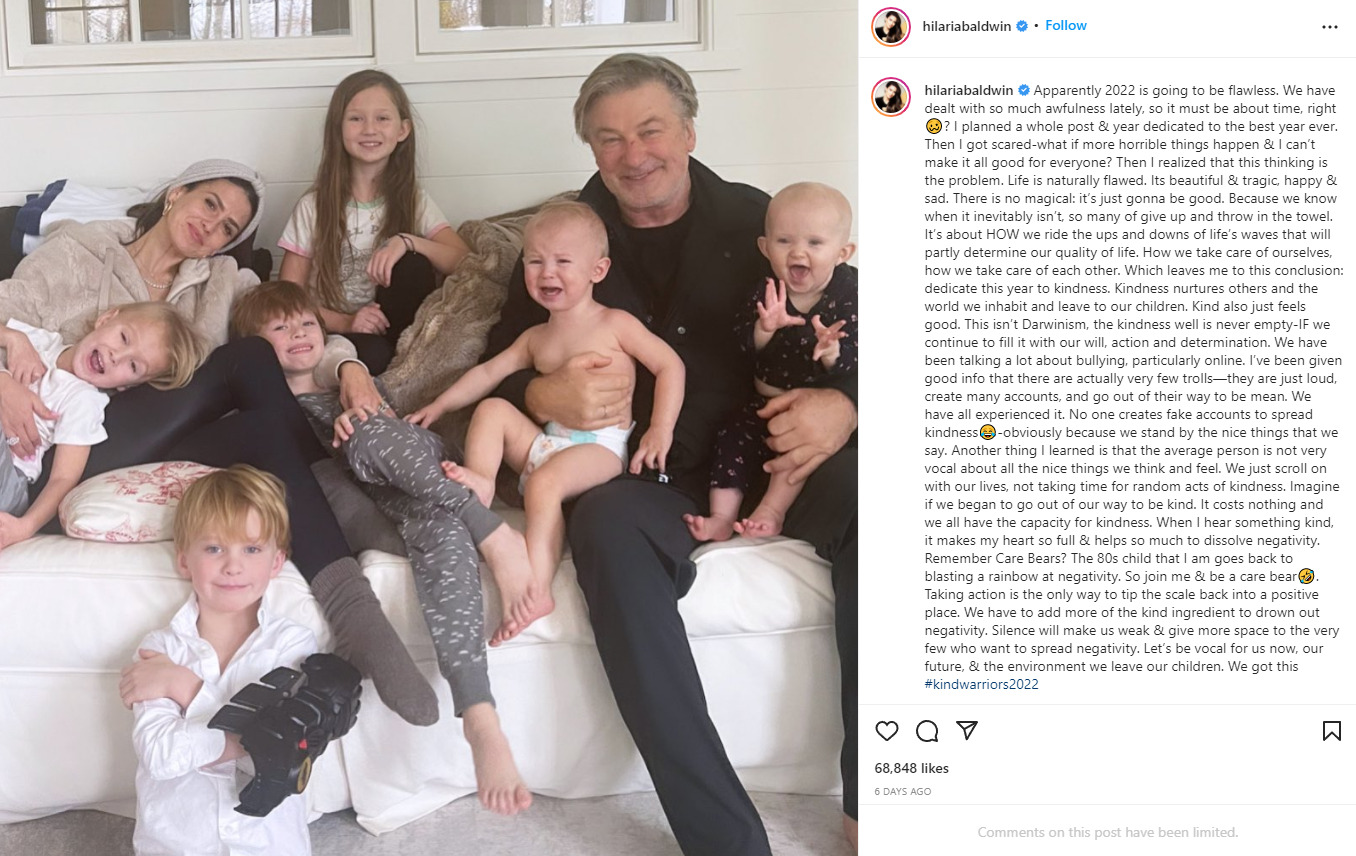 In an interview with ABC News’s George Stephanopoulos, the actor stated, “I’ve been told by people who are in the know…that it’s highly unlikely that I would be charged with anything criminally.”

Not long after the interview aired, Santa Fe District Attorney Marie Mary Carmack-Altwies clarified that Alec Baldwin can still be criminally culpable “for his/her actions and/or inactions on the set of Rust.”

Carmack-Altwies also expressed her intent to “exercise my prosecutorial discretion to its fullest, including filing charges that are supported by probable cause,” noting that her office was currently juggling “various legal theories at the time” which could potentially see Baldwin charged for the killing of Hutchins.

Making matters worse, Baldwin’s interview with Stephanopoulos was seemingly in breech of an agreement that may have forbidden the actor from making any comments regarding the shooting on the set of Rust.

Deadline reported that anonymous sources from Santa Fe’s law enforcement were not happy with Alec Baldwin publicly speaking about the tragic incident, as he was allegedly explicitly instructed not to make comments on the shooting beyond condolences.

“Interviewed immediately after the shooting and subsequently by the Sheriff’s Office, the Emmy winner has been asked to not comment on the shooting beyond condolences as the police’s investigation continues – requests Baldwin has acknowledged, but is clearly ignoring as he lays out his version of what went down that terrible day,” said one of the outlet’s unnamed sources. 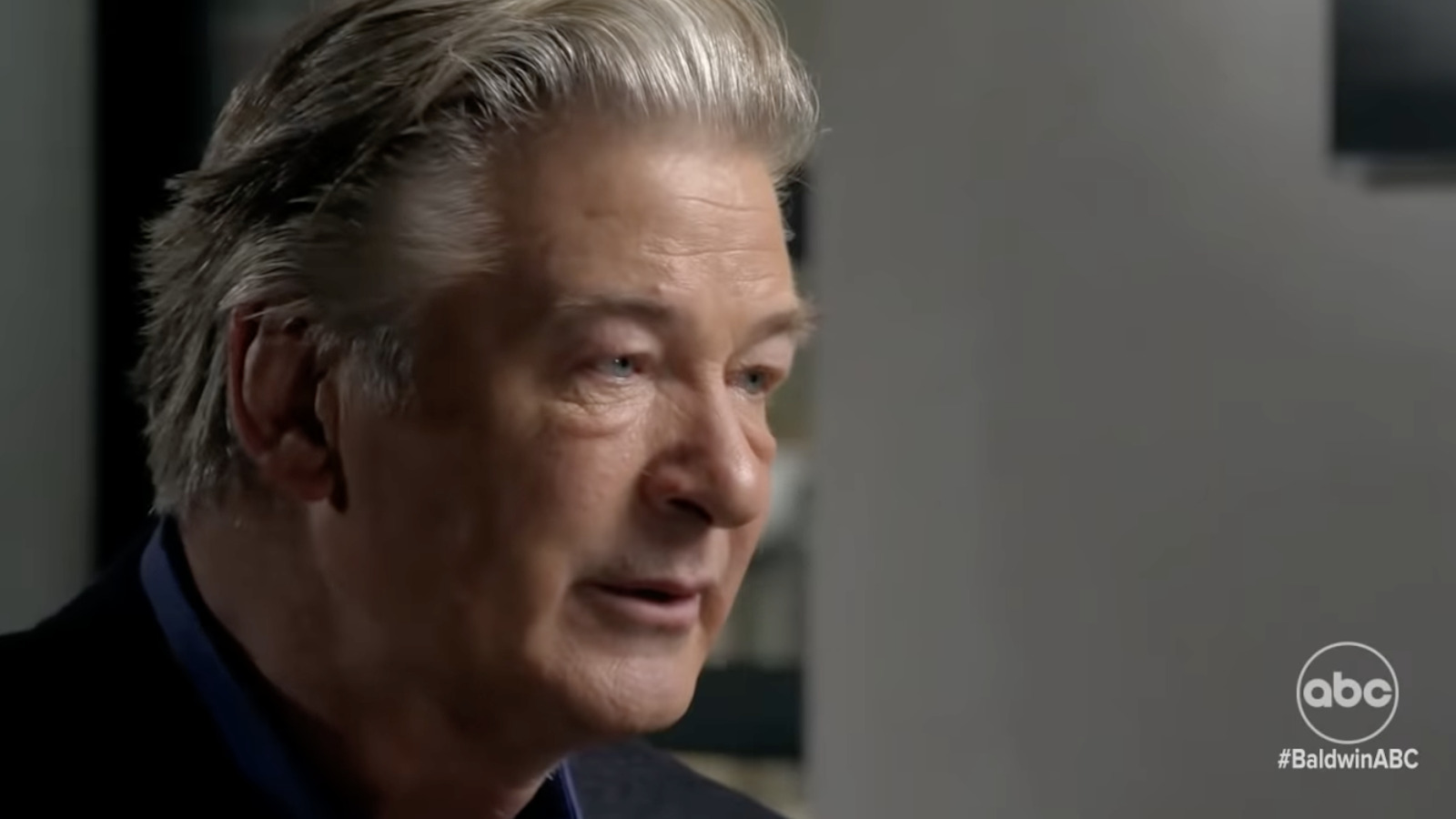 Additionally, the film’s script supervisor, Mamie Mitchell, has filed a lawsuit against Baldwin, claiming that the actor “intentionally, without just cause or excuse, cocked and fired the loaded gun even though the upcoming scene to be filmed did not call for the cocking and firing of the firearm.”

Further, the now-notorious interview saw Baldwin, who claims to not have pulled the gun’s trigger, contradicting his own version of the events that took place on that tragic day.

“It wasn’t in the script for the trigger to be pulled. Well, the trigger wasn’t pulled. I didn’t pull the trigger,” the actor initially told Stephanopoulos. “This was a completely incidental shot, an angle that might not have ended up in the film at all. But we kept doing this.”

However, later in the interview, Baldwin claimed that he had actually pulled the gun’s hammer “as far back as I could without cocking the actual [gun].” 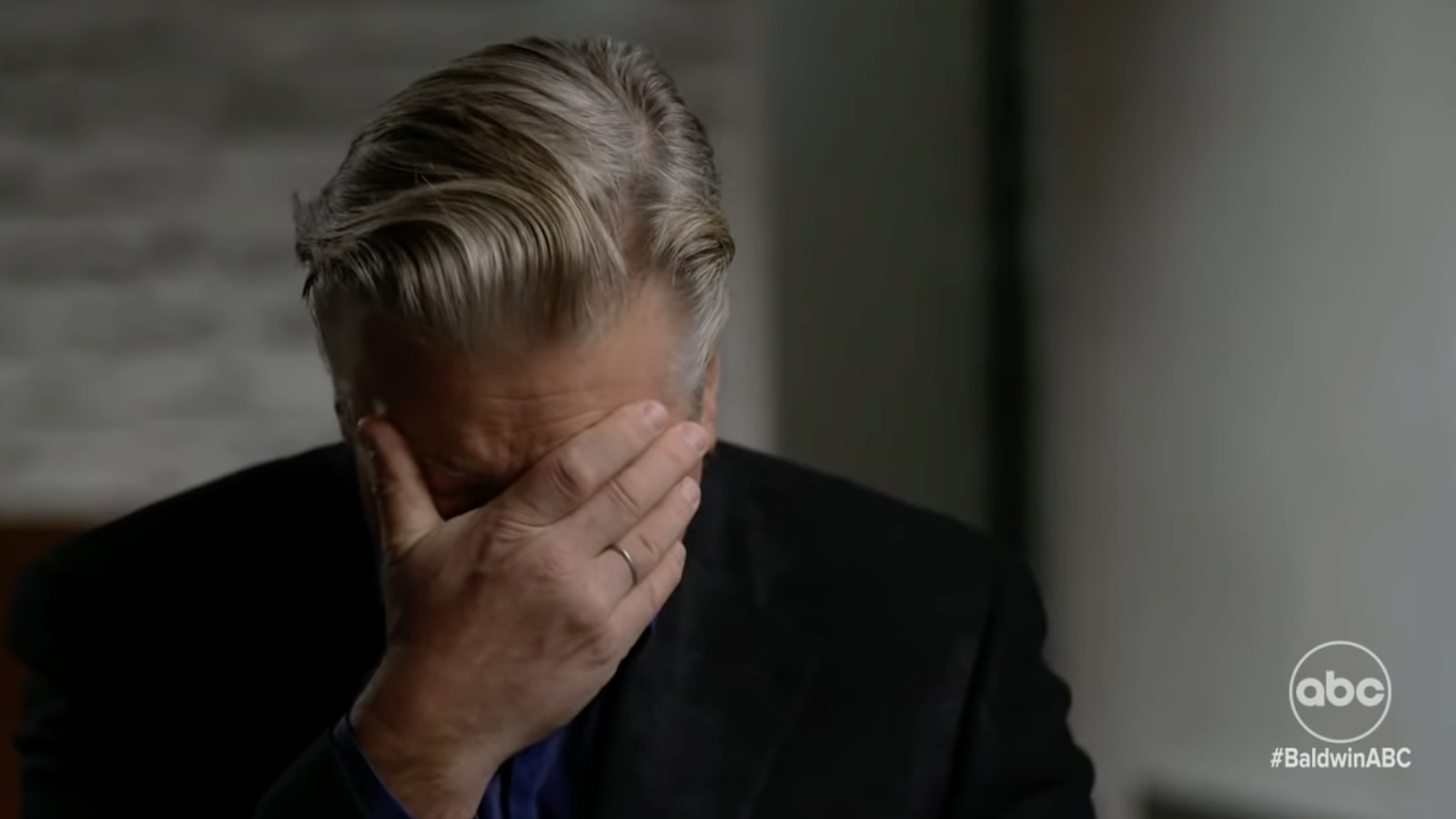 What do you make of Baldwin’s recent Instagram post? Let us know your thoughts in the comments section down below or on social media.

NEXT: Nicolas Cage Weighs In On Alec Baldwin Rust Shooting: Actors “Need To Know How To Use A Gun” And “Know What The Procedure Is”