A growing number of Star Wars fans have been taking to social media to mock the most recent episode of “The Book of Boba Fett.” 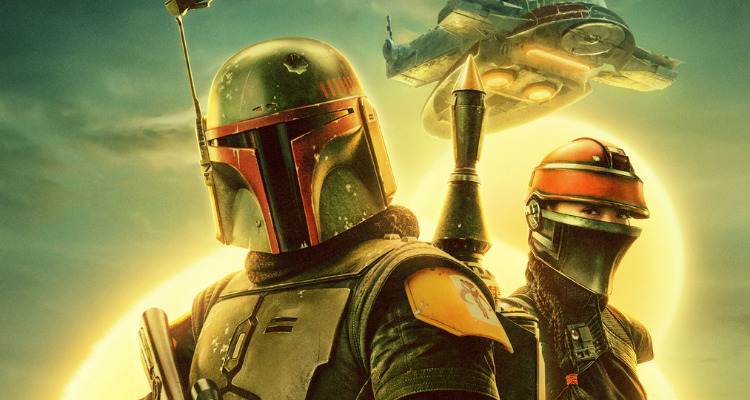 In that latest episode of the Disney Plus show — “The Streets of Mos Espa,” the third episode of the series — a new group of characters was introduced, a group that many fans believe doesn’t quite fit within the world of Star Wars.

A gang of cybernetic teenage bikers, the group is being panned for their colorful bikes and cyberpunk-esque appearance.

“There’s not an ounce of Star Wars in this image,” Director of Publishing at UDON Enterainment, Matt Moylan, tweeted along with an image of the gang. 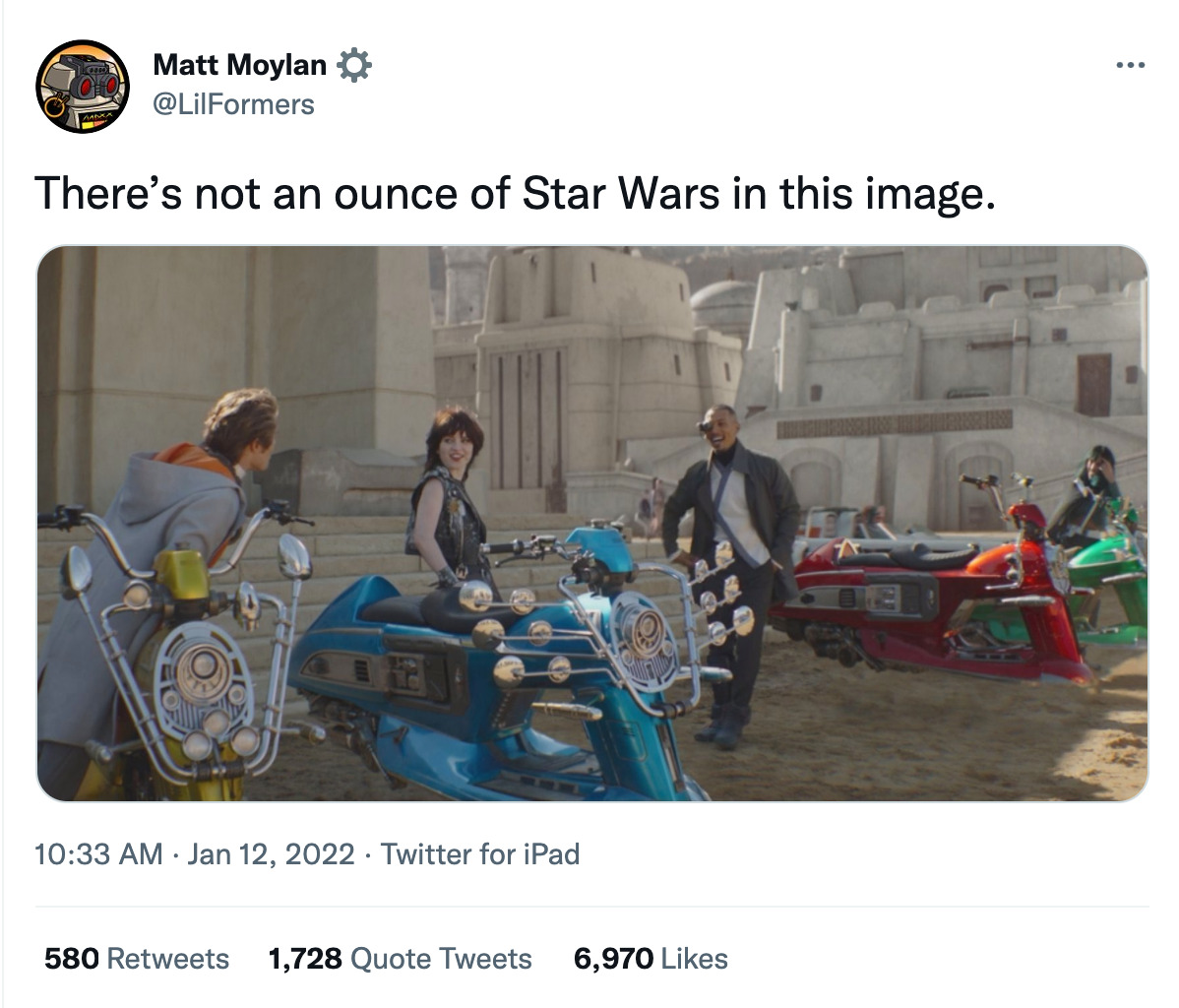 RELATED: Rumor: The Book Of Boba Fett Ratings “Not Doing As Well In Streaming As The Walt Disney Company Would Like”

Moylan’s sentiment seems to have resonated with a good many Star Wars fans. As of Friday, Moylan’s tweet boasts a whopping 580 retweets, 1,728 quote tweets and 6,970 likes.

Other users simply mocked the new characters for their colorful appearance. 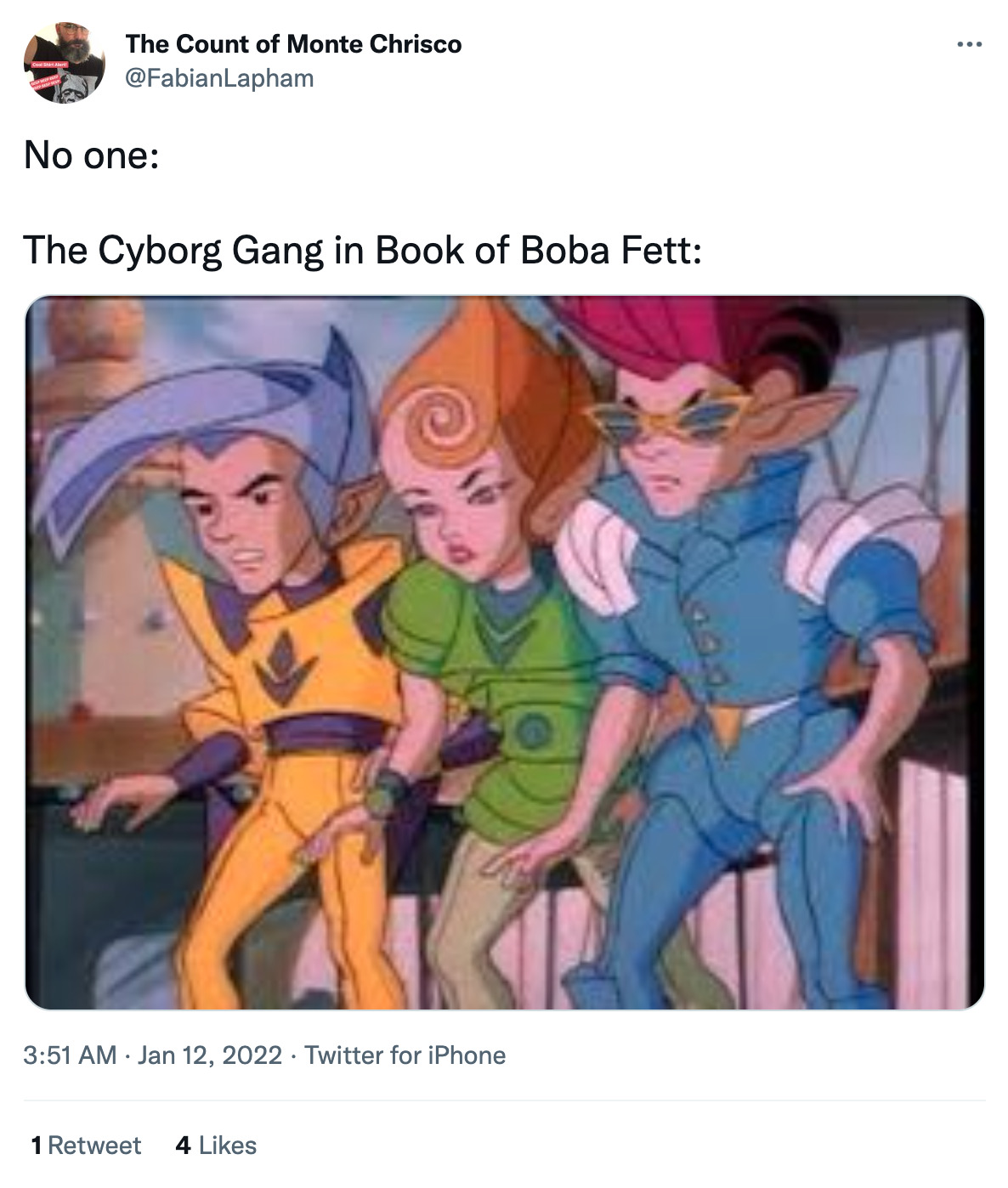 One user wrote “I can’t believe what I just watched.#TheBookOfBobaFett is SO dumb. This is NOT Star Wars.” 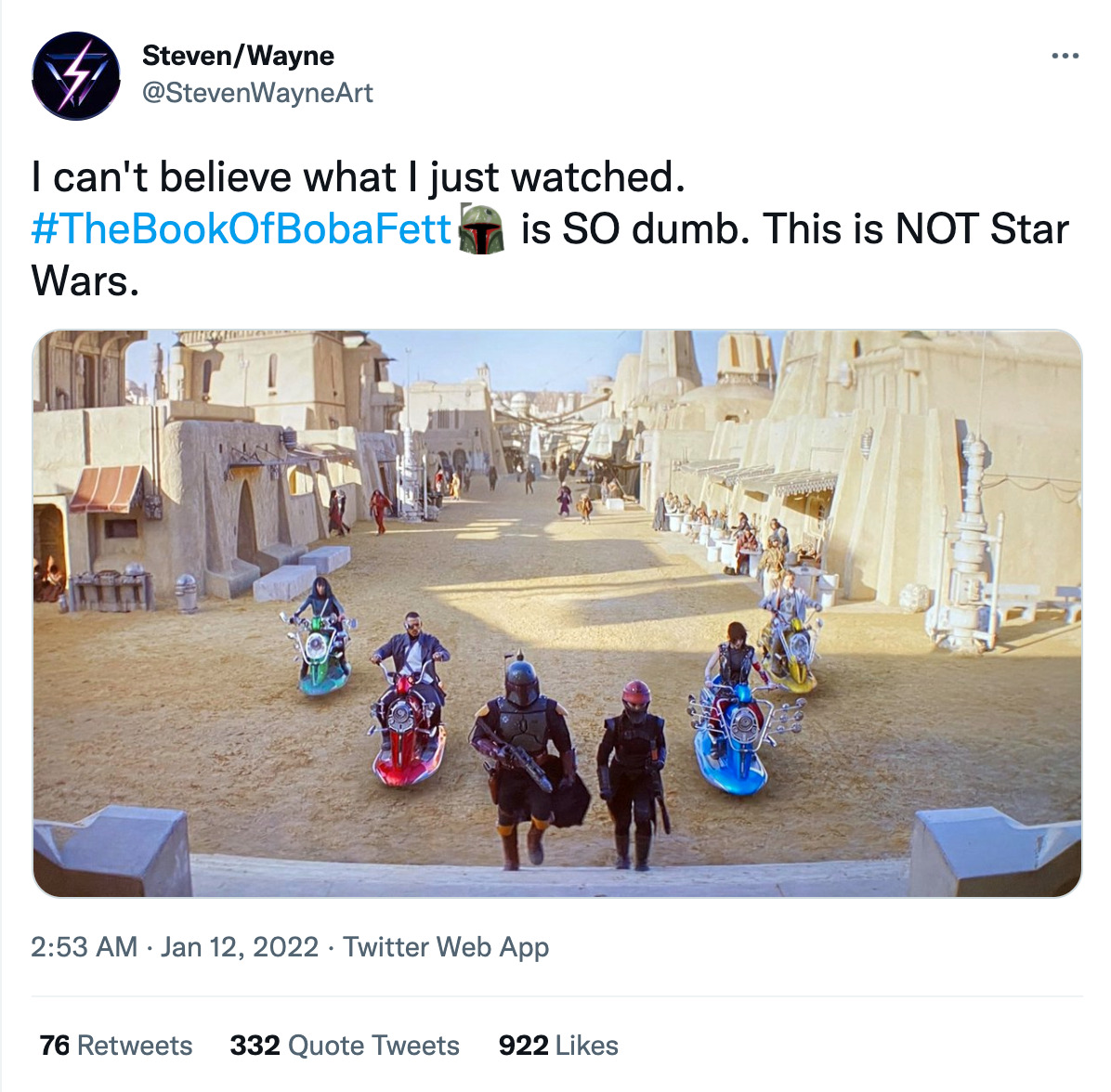 “That whole ‘Quadrophenia’ mod cyborg gang chase scene from ‘The Book of Boba Fett’ was beyond asinine,” another user wrote. 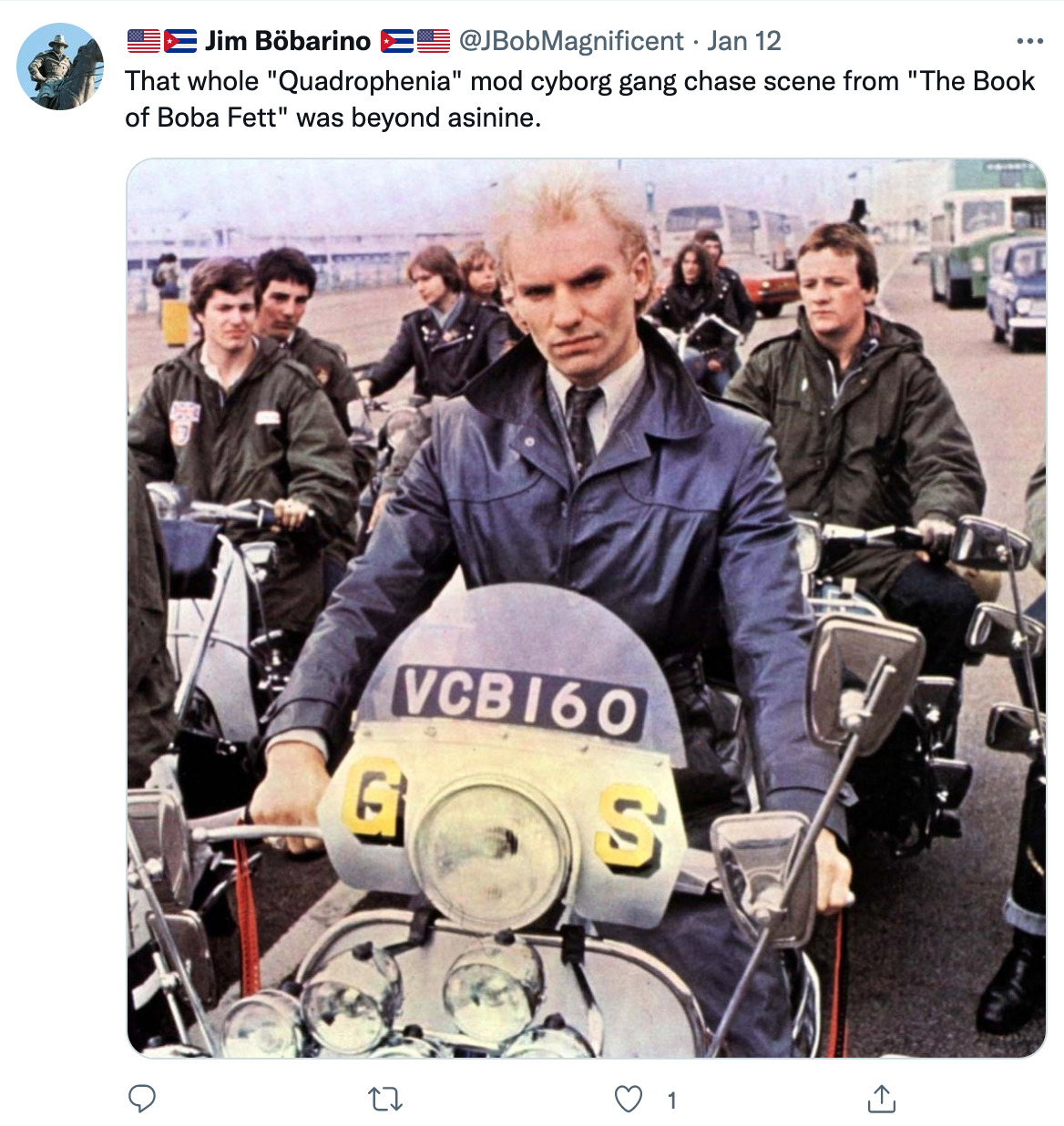 Other users have pointed their criticisms squarely at the gang’s bikes, which have been repeatedly described —  in jest — as colorful Vespas.

“The Book of Boba Fett started out strong but this 3rd episode was terrible. You got the squad of power rangers flying on vespas lol,” one Twitter user wrote.

Another user tweeted, “I haven’t seen the Book of Boba Fett but how do they get the vespas from Zoey 101.” 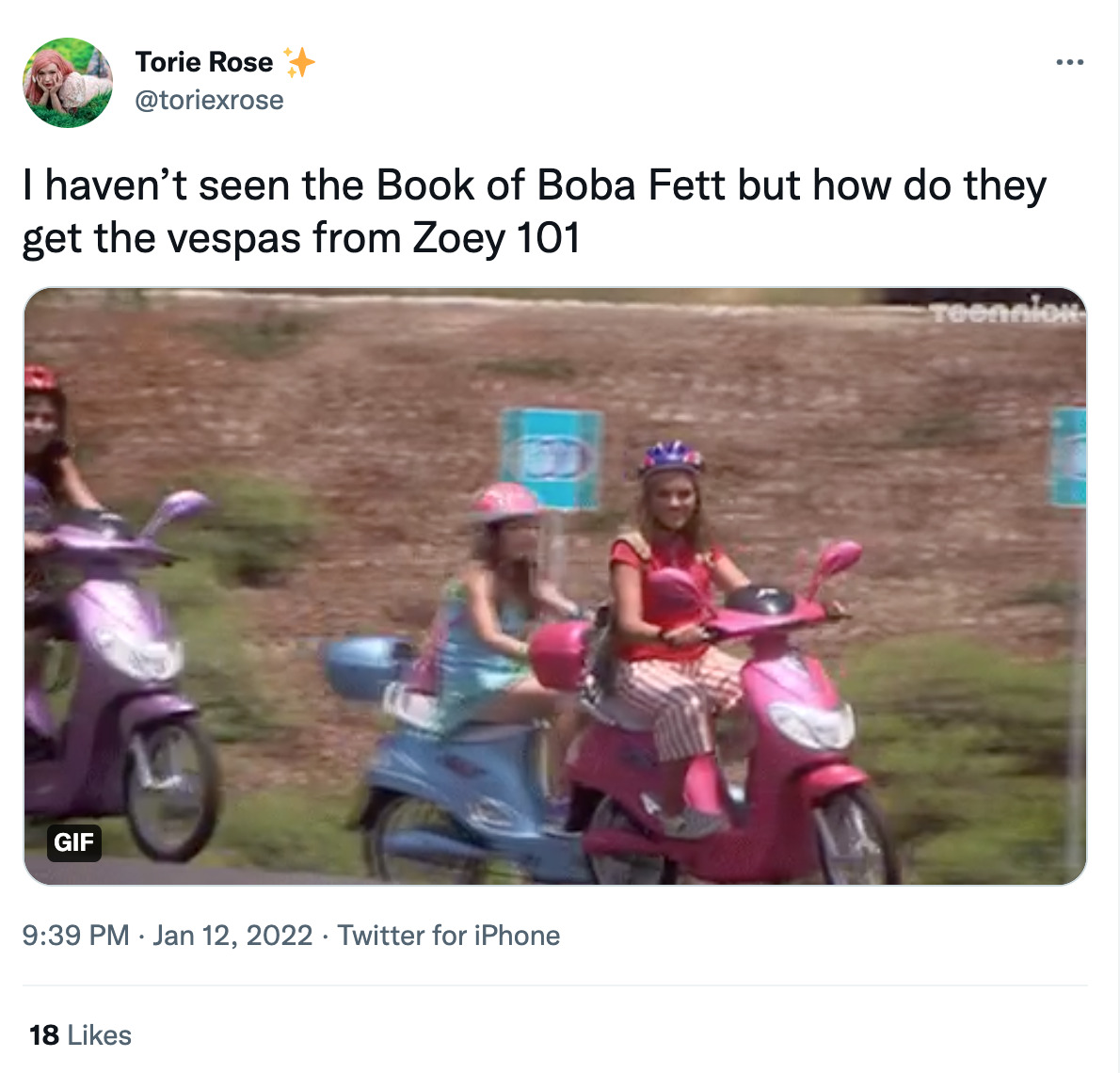 “I would just point out that Boba Fett’s biker gang was riding a bunch of space Vespas,” tweeted Mike Whelan.

He added, “I’d like to submit my application to be in Boba Fett’s biker gang.” 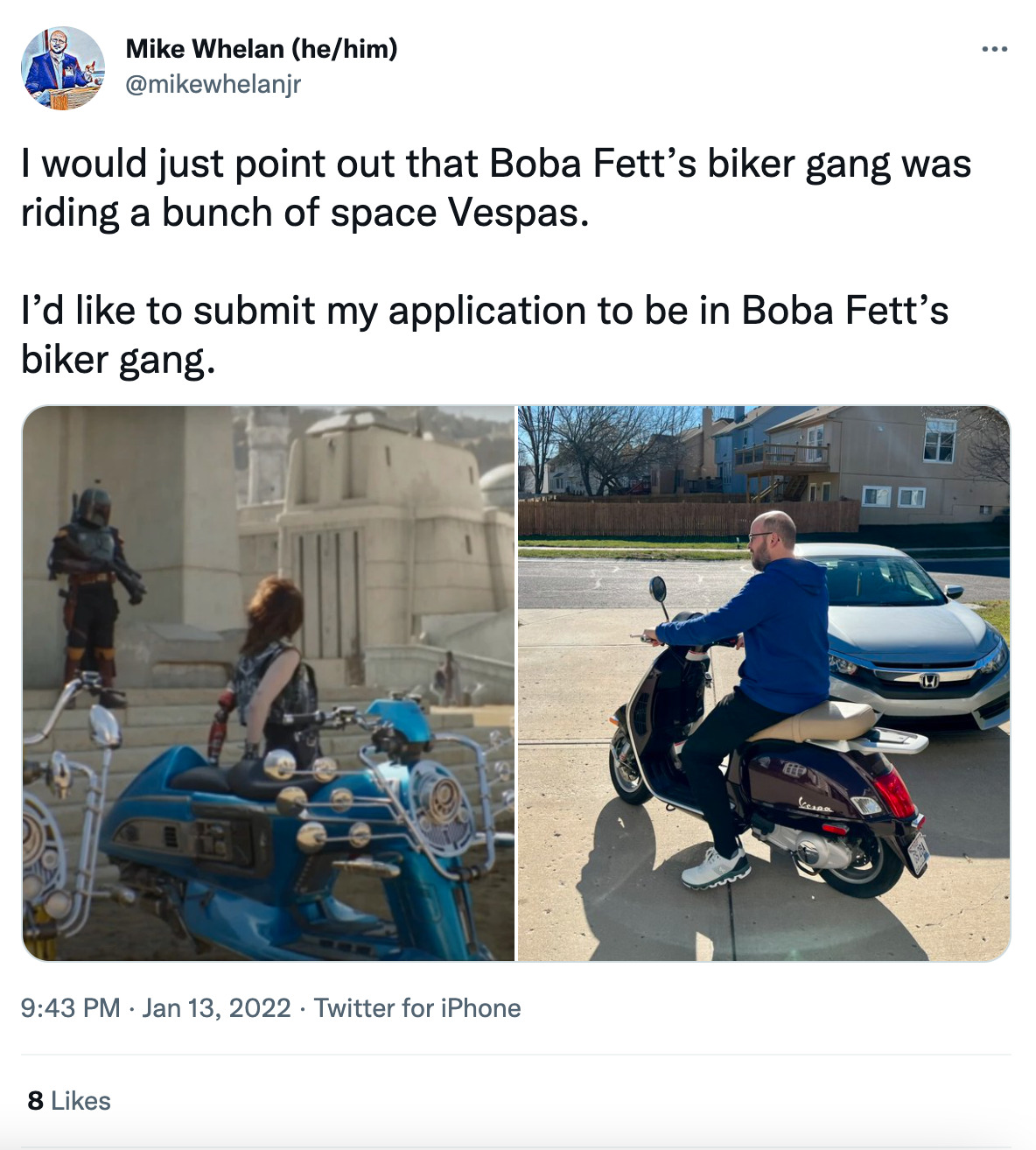 Various entertainment news sites responded to the criticism by defending the show.

Bill Bradley of ScreenRant, for example, argued that while the characters “don’t look like they belong in Star Wars” that “may be the point.”

“They desperately want to be somewhere else, and the candy-colored Vespa-like bikes, which would look more natural on a high-tech world like Coruscant, are the perfect way to fight against the norm,” Bradley wrote.

Similarly, Vice dismissed fan criticisms, arguing that “deciding what is or isn’t Star Wars… isn’t up to the fans.”

Criticism for the new characters and their colorful bikes isn’t coming from Twitter users alone, however. In a video published on Thursday titled “Is Book of Boba Fett A Disappointment,” Canadian YouTuber and film critic John Campea was quick to mock the new characters’ inclusion.

“The Mos Espa Vespas,” Campea said, jokingly. “I couldn’t tell if I was watching Luca or Book of Boba Fett.”

Chapter 3 first introduces the characters when a water seller approaches Fett, demanding he reprimand the youths for stealing his product. The group later explains that the water monger has been selling at unreasonable prices and that they are stealing from him because there isn’t any available work.

This prompts Boba Fett to hire the team of bikers, enlisting them into his slowly growing entourage, which — as of the end of episode three — consists of Fennec Shand, two Gamorrean guards and the new gang.

It remains to be seen whether fans will warm up to the newest additions to Boba’s team. Given the current buzz on social media, “The Book of Boba Fett” showrunners probably shouldn’t hold their breath.

What do you make of this new Vespa biker gang in The Book of Boba Fett?

NEXT: The Book Of Boba Fett Actor Temuera Morrison Confirms Name Change For His Iconic Slave I Starship