Monty Python star John Cleese has mockingly suggested that comedians should include ‘sensitive content warnings’ ahead of their comedy shows in order to preemptively head off mob backlash from those easily offended by mere jokes. 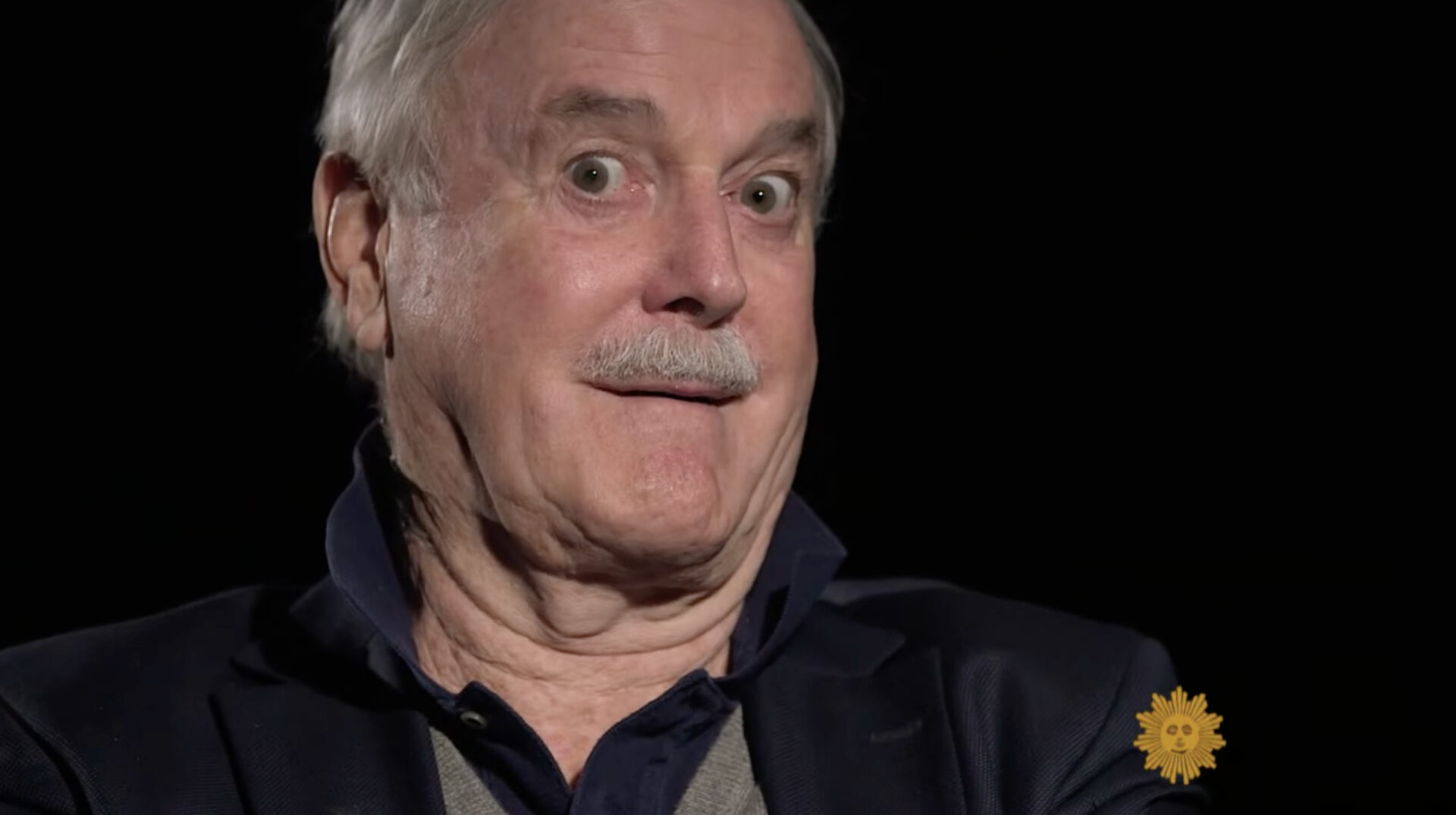 RELATED: Monty Python Star John Cleese Unapologetically Mocks Cambridge Union’s Cancel Culture: “I Am Blacklisting Myself Before Someone Else Does”

Cleese’s comments came in response to fellow comedian Rob Schneider, who recently tweeted his support of writer and comedian Whitney Cummings after she faced criticism this past weekend for defending Joe Rogan and suggesting that mainstream media, unlike the podcaster, has lost its credibility.

Her tweet was itself prompted by the recent circulation of videos showing Rogan using the n-word, which have resurfaced amidst the ongoing attempt to deplatform the podcaster from audio streaming platform Spotify.

Though the podcaster was quick to issue an apology for his past use of the word to the cancel culture mob, it unsurprisingly did little to stop the outrage campaign against him.

In a follow-up tweet, Cummings doubled-down on her previous comments, throwing her support behind both the famed podcaster and comedians in general. 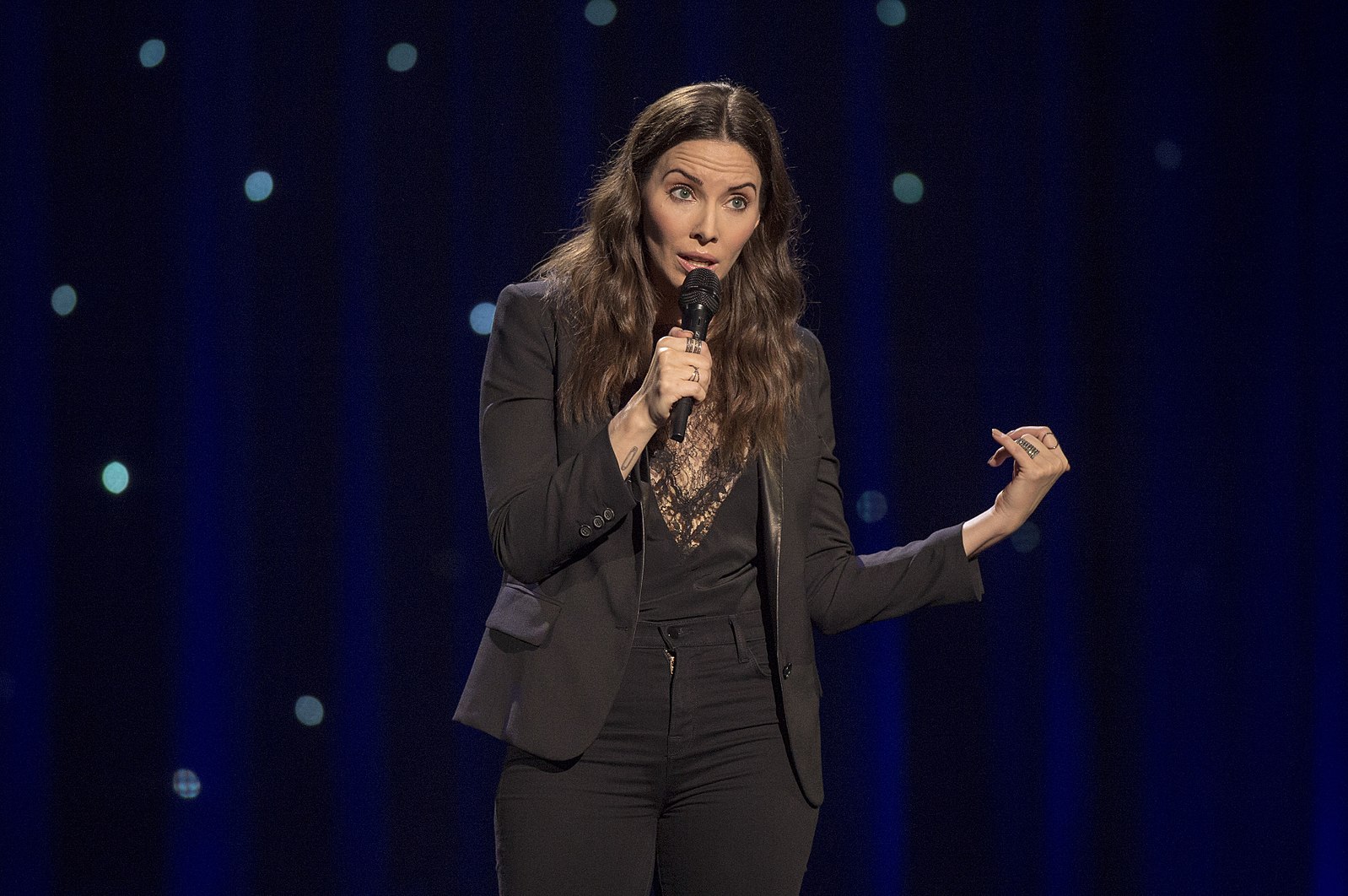 “Comedians did not sign up to be your hero,” wrote Cummings the next day. “It’s our job to be irreverent and dangerous, to question authority and take you through a spooky mental haunted house so you can arrive at your own conclusions.”

She concluded the statement encouraging her followers to ” Stay focused on the people we pay taxes to to be moral leaders.” 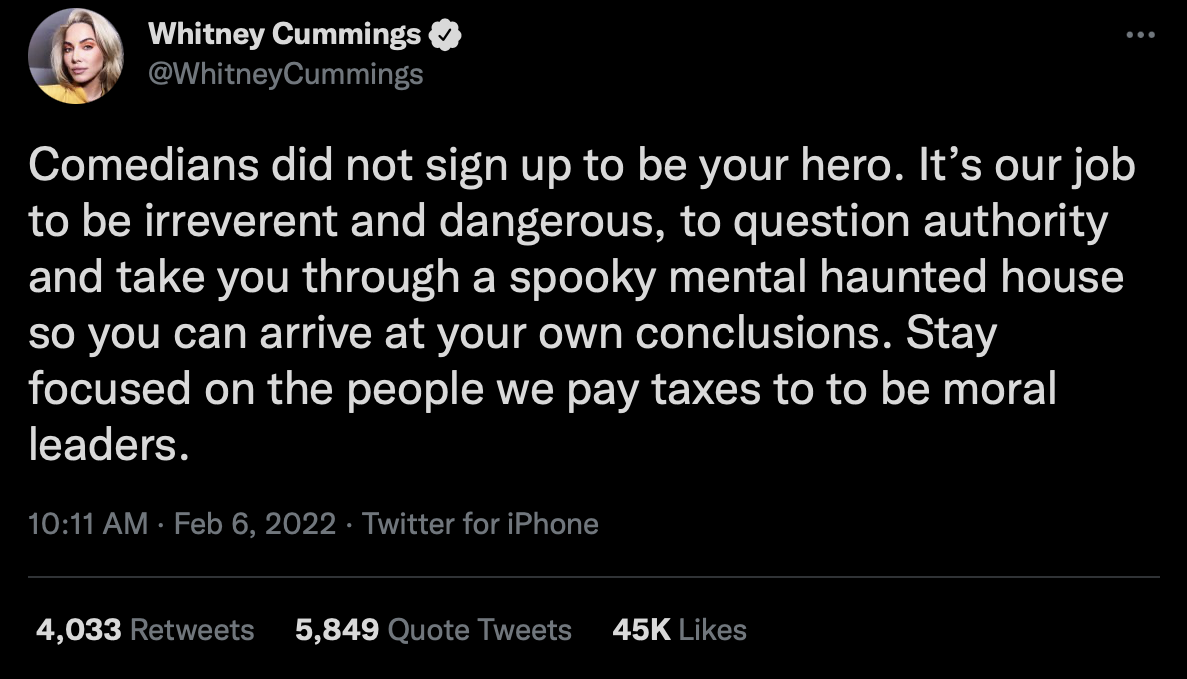 “Thank YOUUUU, Whitney!” wrote an ecstatic Rob Schneider in response to Cummings’ declaration, adding “You speak for ALL of us comedians…” and #CancelWhitney , an outrage-inspired hashtag which began making the rounds following the comedian’s initial tweeting in support of Rogan. 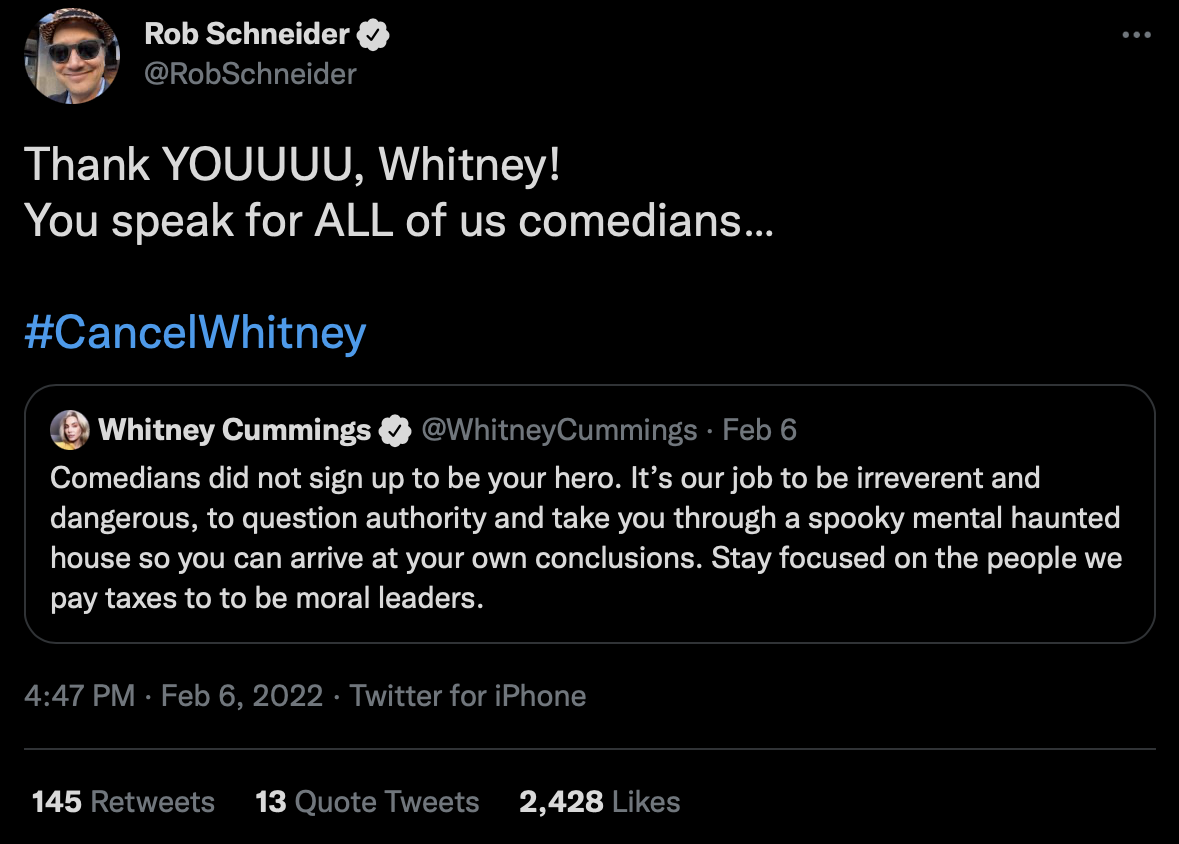 Enter legendary comedian John Cleese, who replied to Schneider’s tweet with the humourous suggestion that comedians should provide ‘sensitive content warnings’ ahead of their comedy shows in order to avoid becoming the subject of a cancel culture mob.

“I think comedy shows should say ‘Warning ! This show contains attempts to make you laugh, and should NOT be watched by anyone of a disposition so anxious that ideas, different from their own, may cause their emotional collapse,'” Cleese mocked the easily offended. 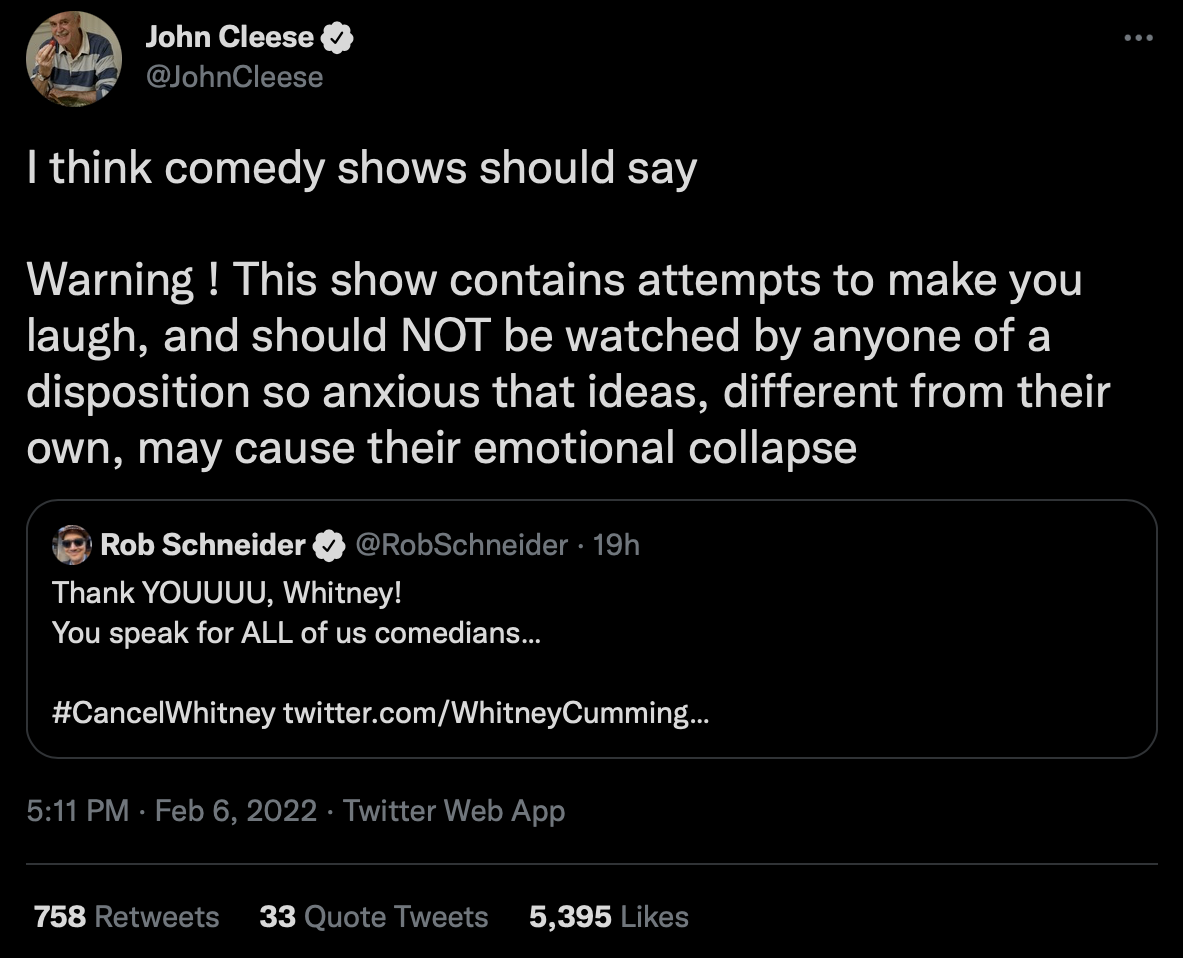 “John, I will make sure this pre-show announcement is read tonight and every night before I step on stage…” prefaced the SNL alumni. “Would you add anything else? Perhaps ‘if an actual injury occurs your head might explode, which won’t offend me in the slightest.’ Muchos gracias, Rob.” 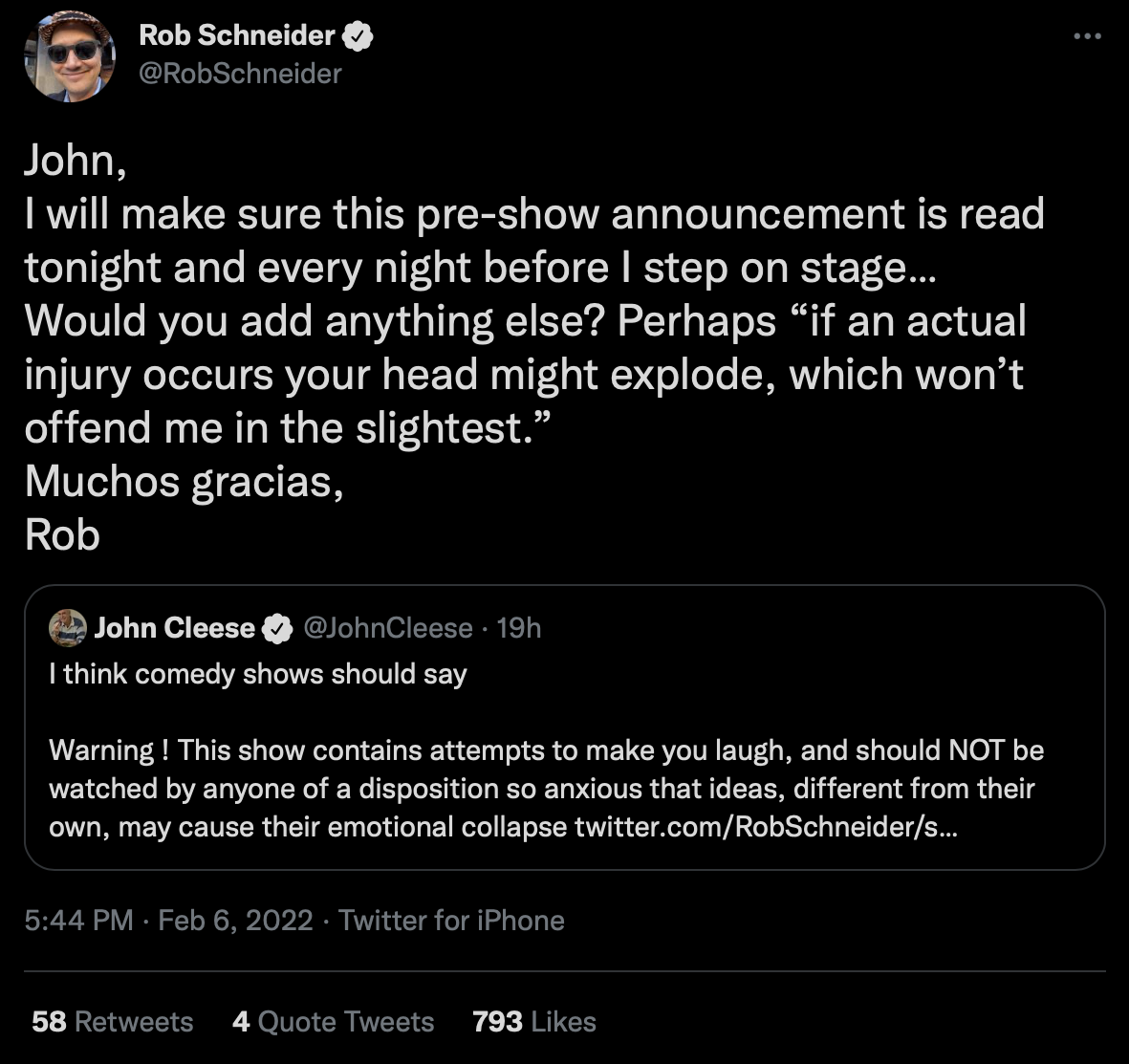 “Rob, I think that the simplicity of the former is slightly better at the moment,” responded Cleese, adding “However if anyone’s head does explode, please add your line in future,” and concluding the exchange by asking Schneider to, in the off chance that it does happen, send him photos of someone’s head actually exploding from taking offence at his jokes. 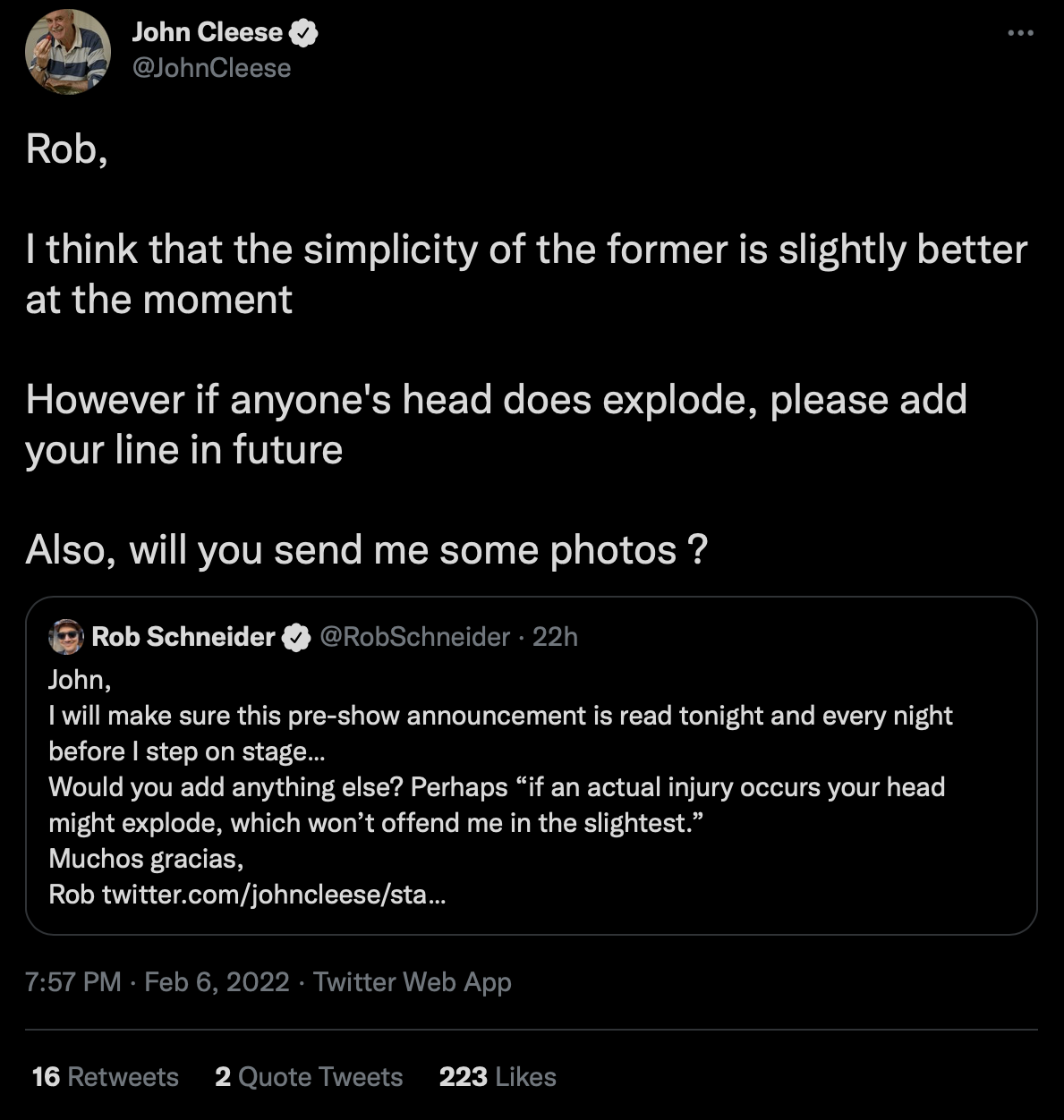 In August of last year, Cleese announced that he was working on a documentary that would explore the effects that the woke weapon of cancel culture has had on comedy and comedians who have faced criticism for their routines.

“I’m delighted to have a chance to find out, on camera, about all the aspects of so-called political correctness,” Cleese explained of his project. “There’s so much I really don’t understand, like: how the impeccable idea of ‘Let’s all be kind to people’ has been developed in some cases ad absurdum.”

He further asserted, “I want to bring the various reasonings right out in the open so that people can be clearer in their minds what they agree with, what they don’t agree with, and what they still can’t make their mind up about.” 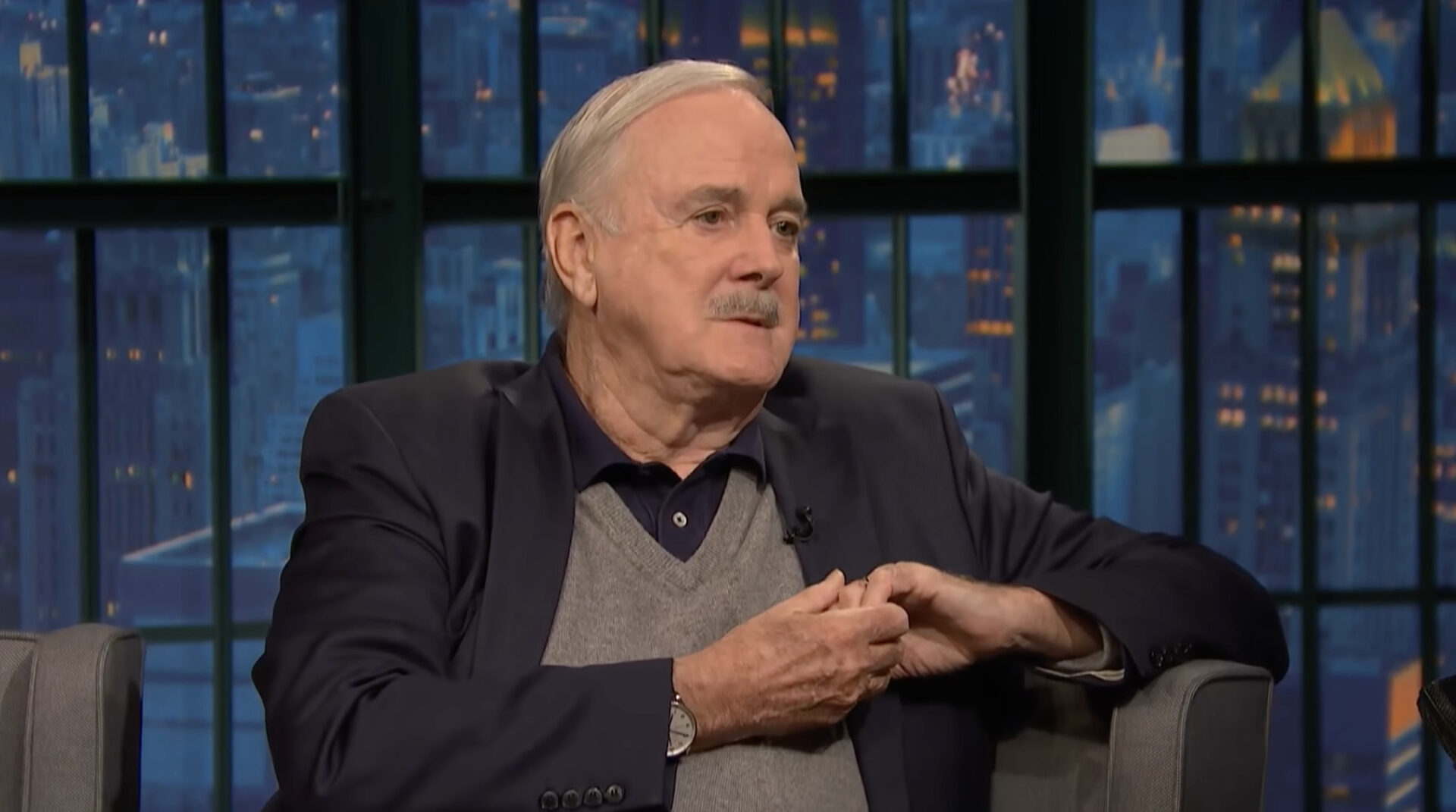 Of course, Cleese is no stranger to cancel culture himself.

In June of 2020, Cleese found himself in the middle of a cancellation attempt by the BBC when the broadcaster took down an episode of Fawlty Towers, a series the comedian starred in and co-created in the ’70s, because it contained “racial slurs.” 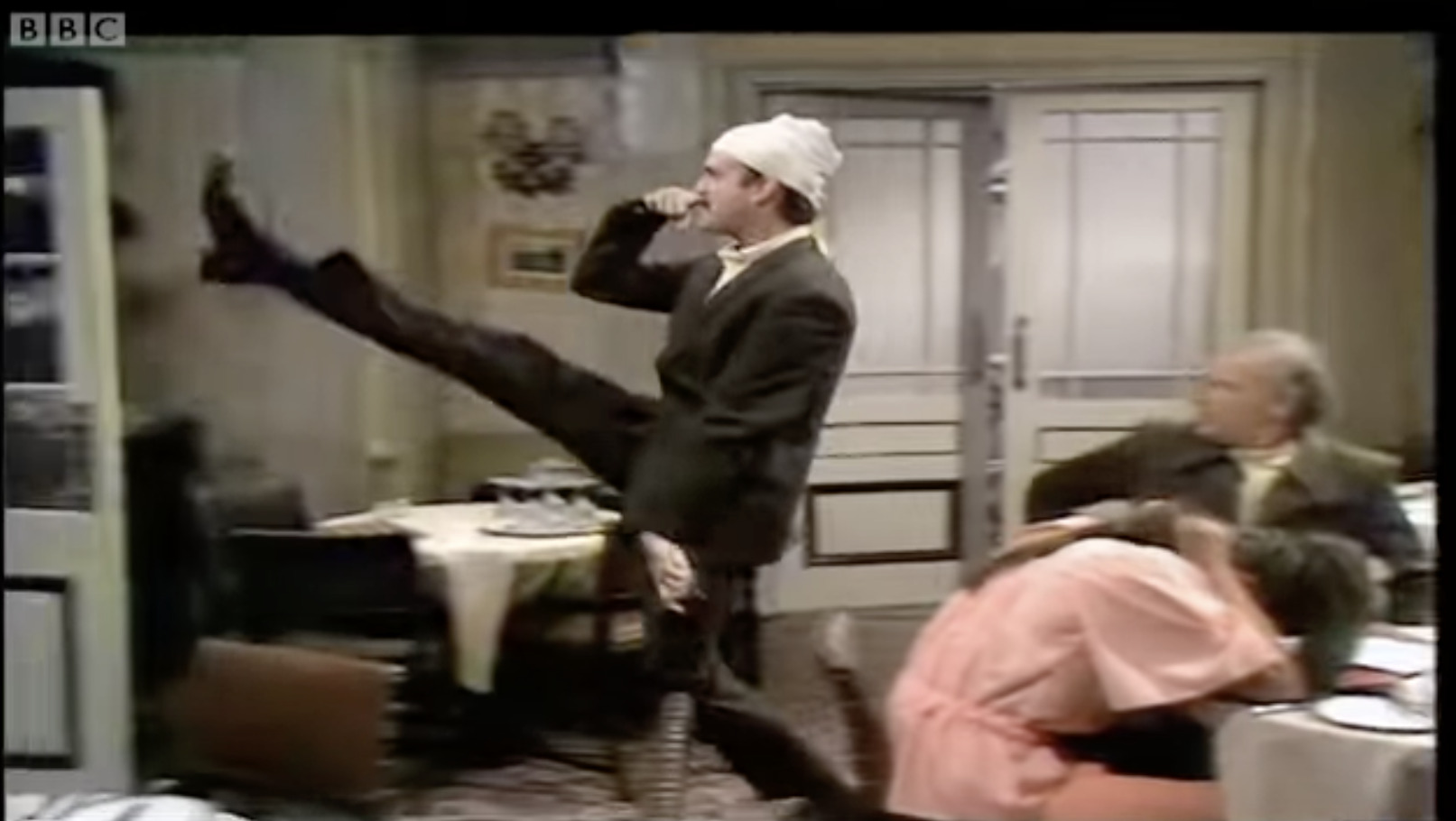 Later in the episode, which was originally broadcasted in 1975, Cleese’s very own character, Fawlty, was seen doing an impersonation of German dictator Adolf Hitler – a figure the comedian had already played a few years earlier on Monty Python’s Flying Circus. 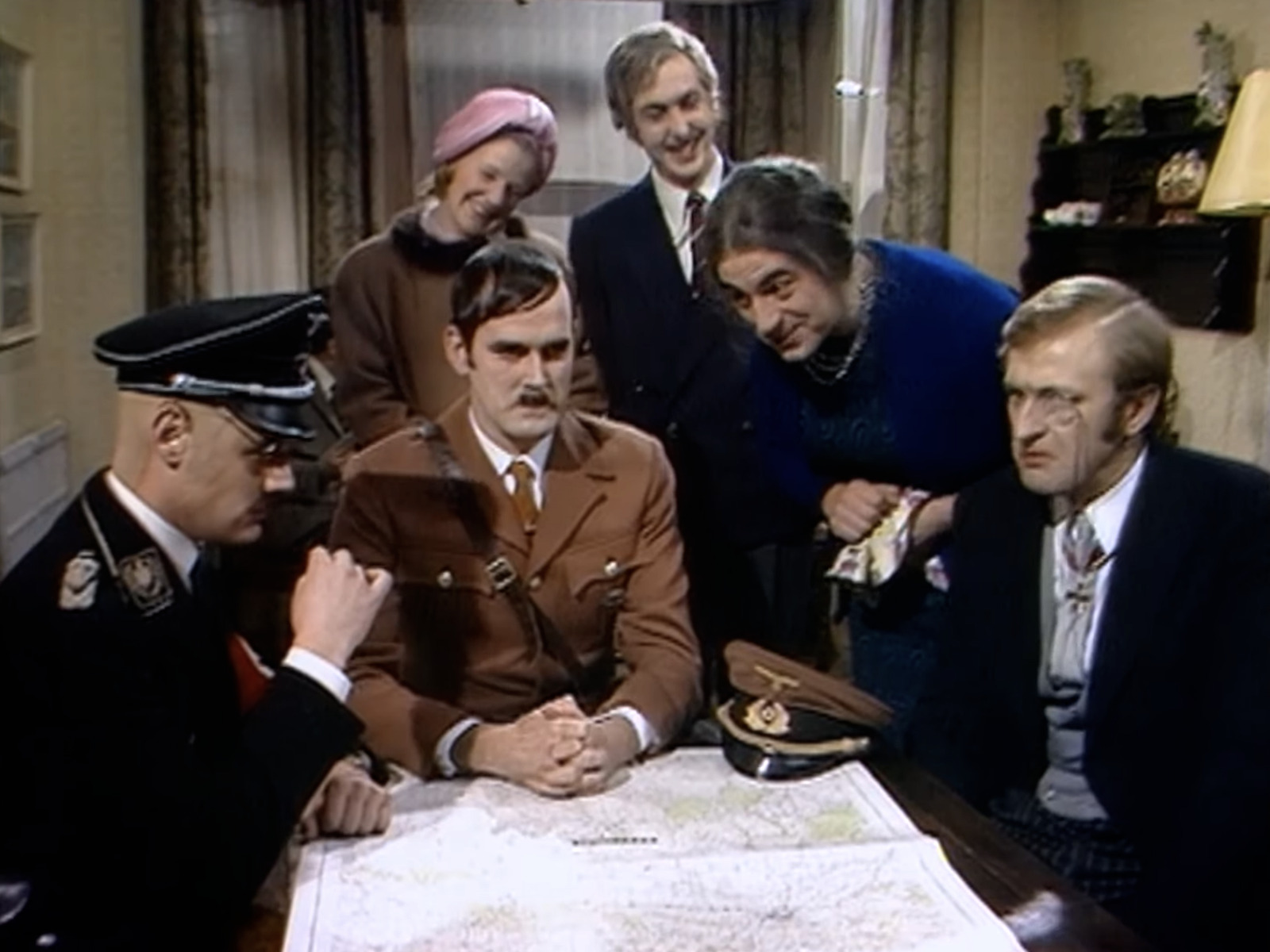 “I would have hoped that someone at the BBC would understand that there are two ways of making fun of human behaviour,” wrote the Fawlty Towers star at the time.

He continued, “One is to attack it directly. The other is to have someone who is patently a figure of fun, speak up on behalf of that behaviour,” namedropping fictional racist character Alf Garnett. 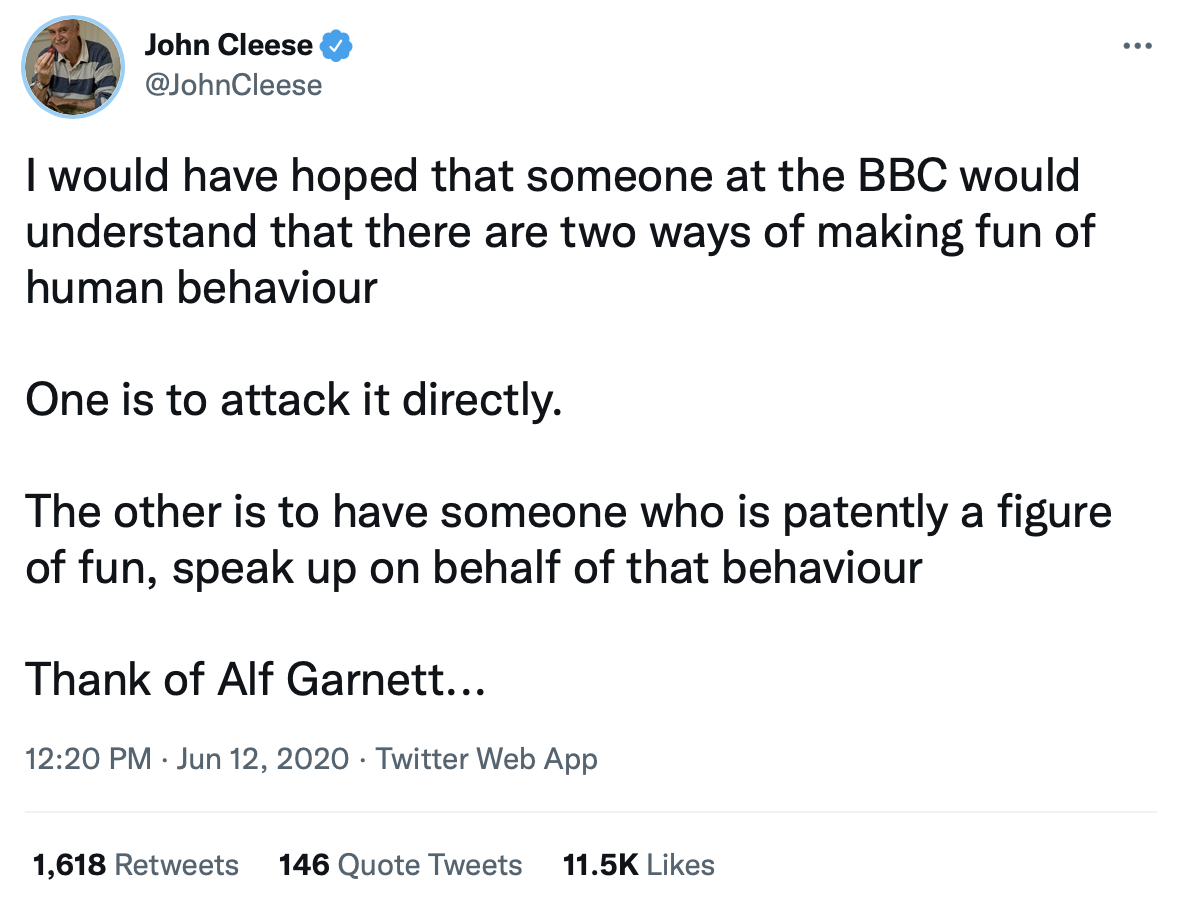 “Thank of Alf Garnett…we laughed at Alf’s reactionary views. Thus wediscredited them, by laughing at him,” Cleese said. “Of course, there were people – very stupid people – who said ‘Thank God someone is saying these things at last.’”

“We laughed at these people too,” recalled the comedian. “Now they’re taking decisions about BBC comedy.” 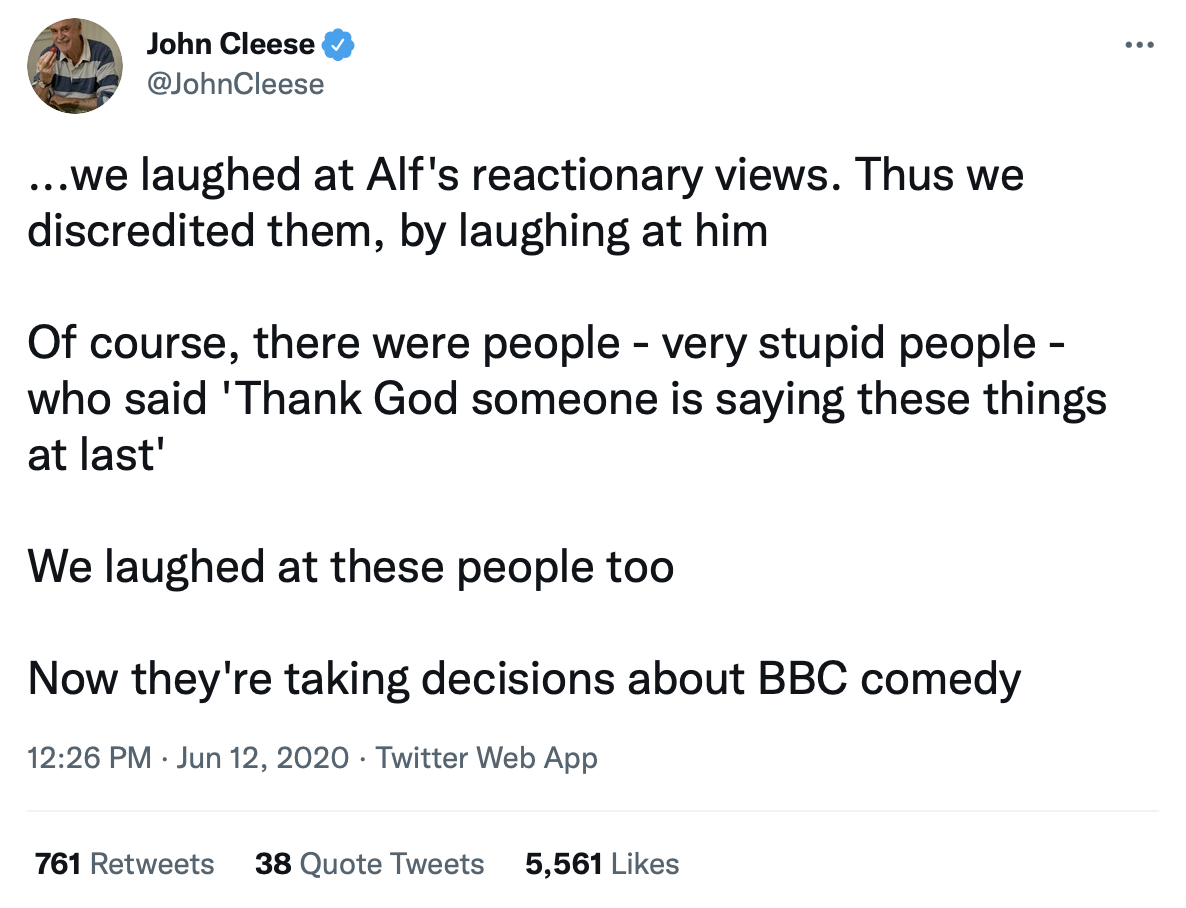 What do you make of Cleese’s humourous and mocking suggestion that comedians issue content warnings ahead of their shows?? Let us know your thoughts in the comments section down below or on social media.

NEXT: Monty Python Star John Cleese To Make Formal Complaint Regarding The “Dishonesty, Deception, And Tone” Of Recent Interview With BBC World News