The Pokémon Company have announced Pokémon Scarlet and Violet, the ninth generation of mainline Pokémon games.

The announcement came at the end of the Pokémon Presents video on February 27th, celebrating the 26th anniversary of the Pokémon franchise- or Pokémon Day as it has become to be known. With it came the new games for “Gen 9”- Scarlet and Violet.

The announcement trailer, as seen above, seems to show Pokémon Centers will not just be within cities. The large red and white buildings- now with a prominent glowing light atop them- also seem to appear just outside major cities, or on routes. Though this has happened on occasion in Sword and Shield. 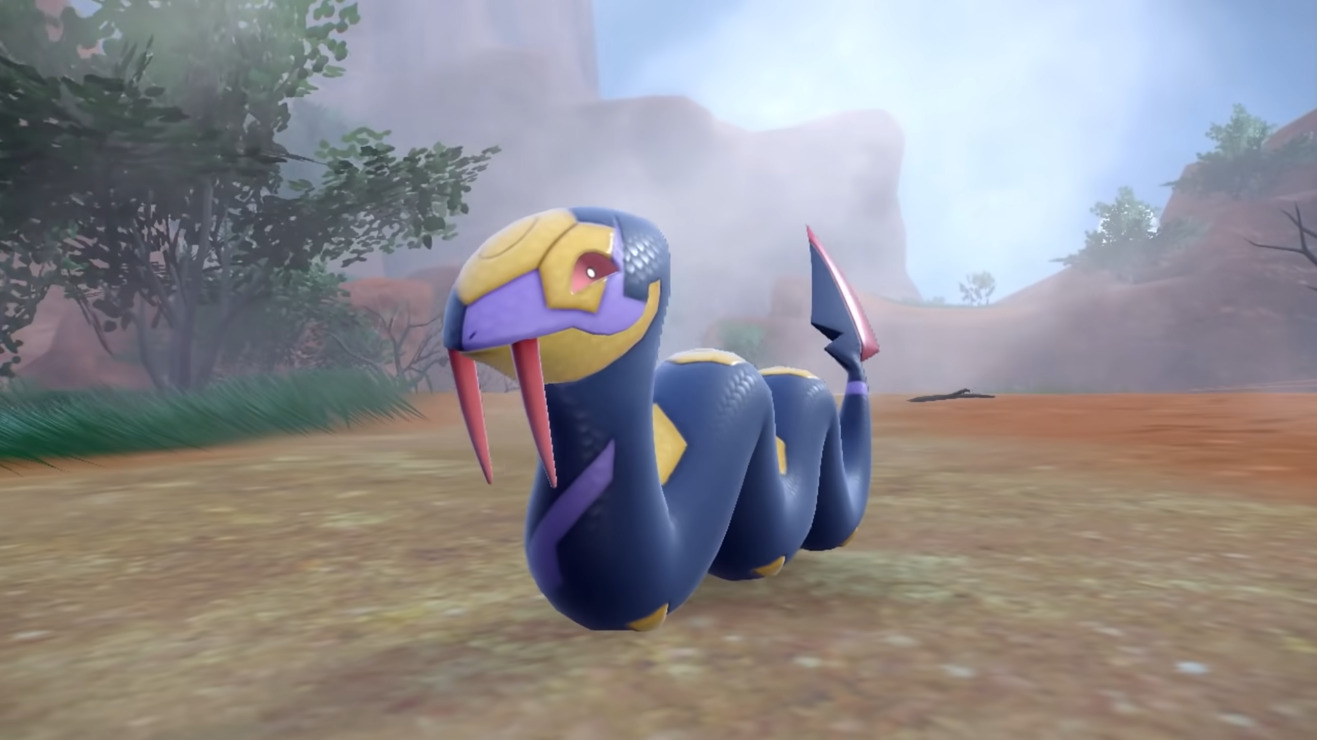 Pokémon texture quality seems to be improved, as shown on the stony body of Stonjourner, the scales on Serviper, or the metalic sheen on Magenemite. Much like Pokémon Legends: Arceus, it appears characters no longer have a cel-shaded outline to them.

The large sweeping vistas in the trailer and large distance between opposing Pokémon in a battle in screenshots would seem to indicate the game will be somewhat open world, much like Pokémon Legends: Arceus. This was confirmed to be the case. 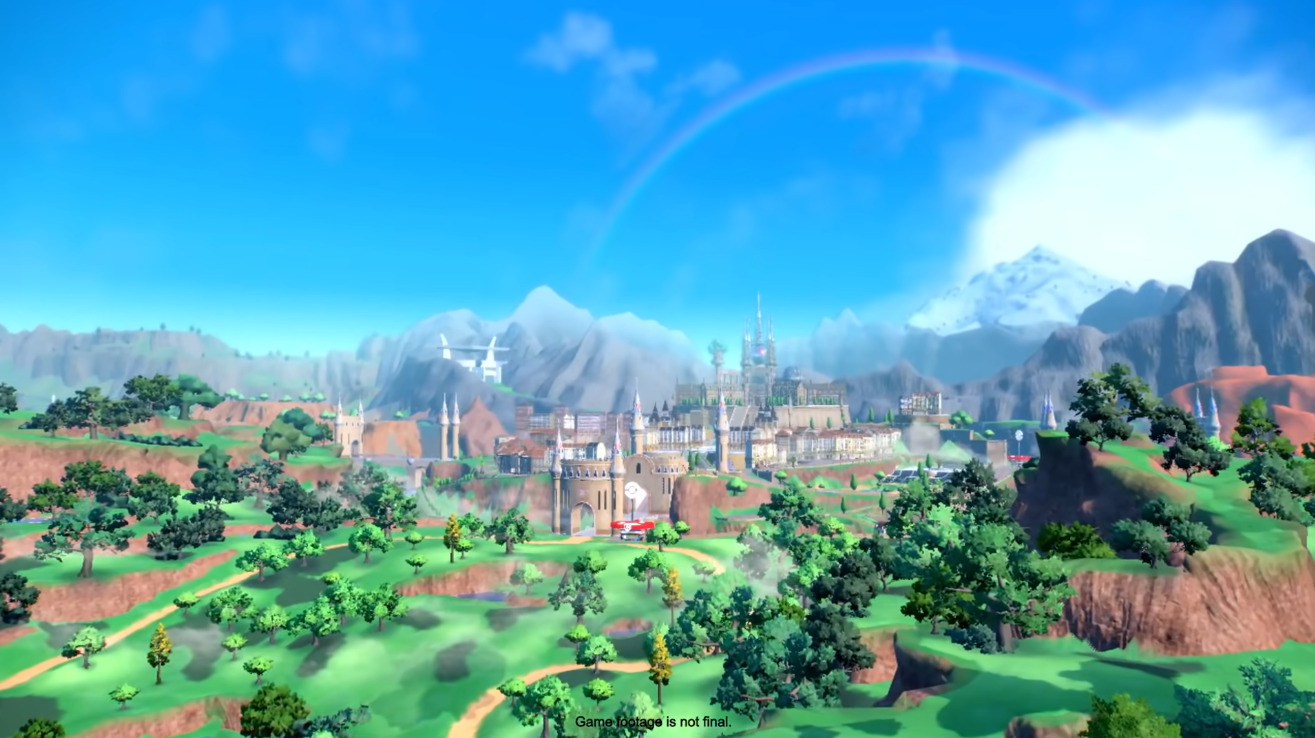 “The Pokémon Scarlet and Pokémon Violet games, the newest chapters in the Pokémon series, are coming to Nintendo Switch later this year,” the official website reads. “With these new titles, the Pokémon series takes a new evolutionary step, allowing you to explore freely in a richly expressed open world.”

“Various towns blend seamlessly into the wilderness with no borders,” the blurb continues. “You’ll be able to see the Pokémon of this region in the skies, in the seas, in the forests, on the streets—all over!” Pokémon Legends: Arceus meanwhile had players enter large areas of wilderness, all cut-off from one another and the hub village. 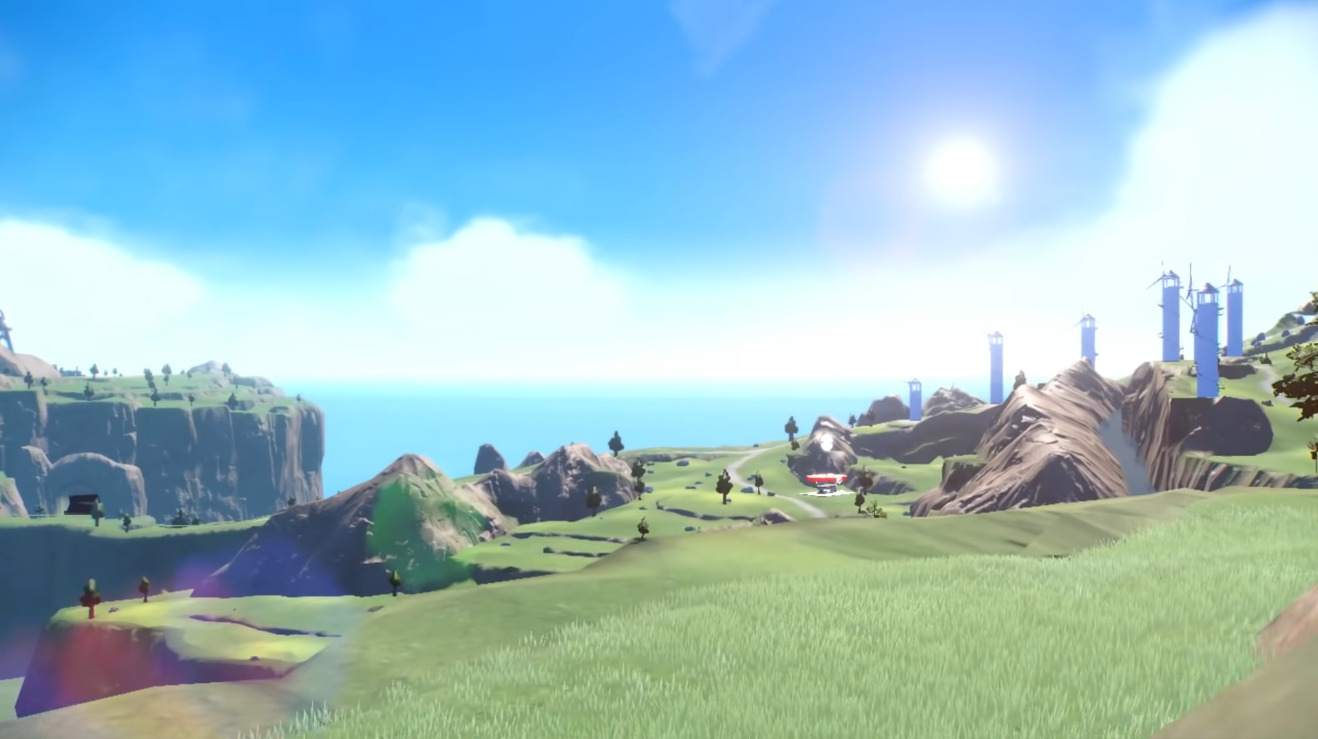 “You’ll be able to experience the true joy of the Pokémon series—battling against wild Pokémon in order to catch them—now in an open-world game that players of any age can enjoy,” the website states.

The official website also provides details on the three starter Pokémon. Grass type Sprigatito is “the capricious, attention-seeking Grass Cat Pokémon,” while Fuecoco is “the laid-back Fire Croc Pokémon that does things at its own pace.” Quaxly meanwhile is “the earnest and tidy Duckling Pokémon.”

The player’s default clothes are also different colors depending on the version. Pokémon Scarlet and Violet are set to launch in Late 2022 for Nintendo Switch. So, what else can we gleam from the few glimpses we have in the trailer? 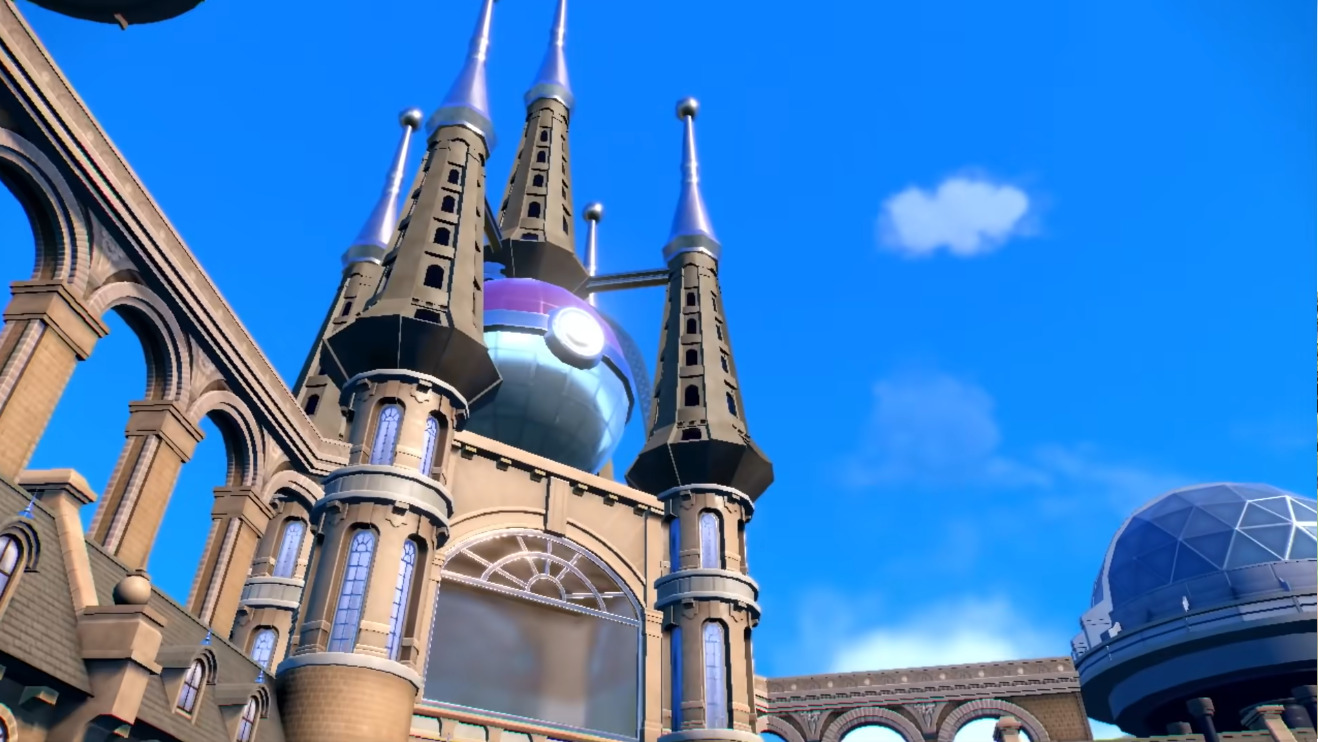 First off, the region appears to be based on Spain and Portugal, also known as the Iberian Peninsula. Aside from glimpses we get of the region’s map, several buildings have a Mediterranean feel, as do the starter Pokémon’s names.

One of the large buildings we see in the trailer may also be based on the Sagrada Família, while the large plaza we see could be inspired by Park Güell.

In the initial part of the trailer we see a security guard enter a room that appears to be an old fashioned study. Along with Spanish-style food, various books, a piano, and various equipment for study, we briefly see a large pile of treasure.

Spain’s long history of conquistadors’ lust for fortune and the hunt for the city of El Dorado could be a point of inspiration for the game’s plot.

There are also some somewhat anachronistic elements in the office- aside from the Nintendo Switch consoles- such as a megaphone, and a shirt or cloth over a chair with a web-like pattern. A star broken up by a lightning bolt also appears in a framed photo and on the board. 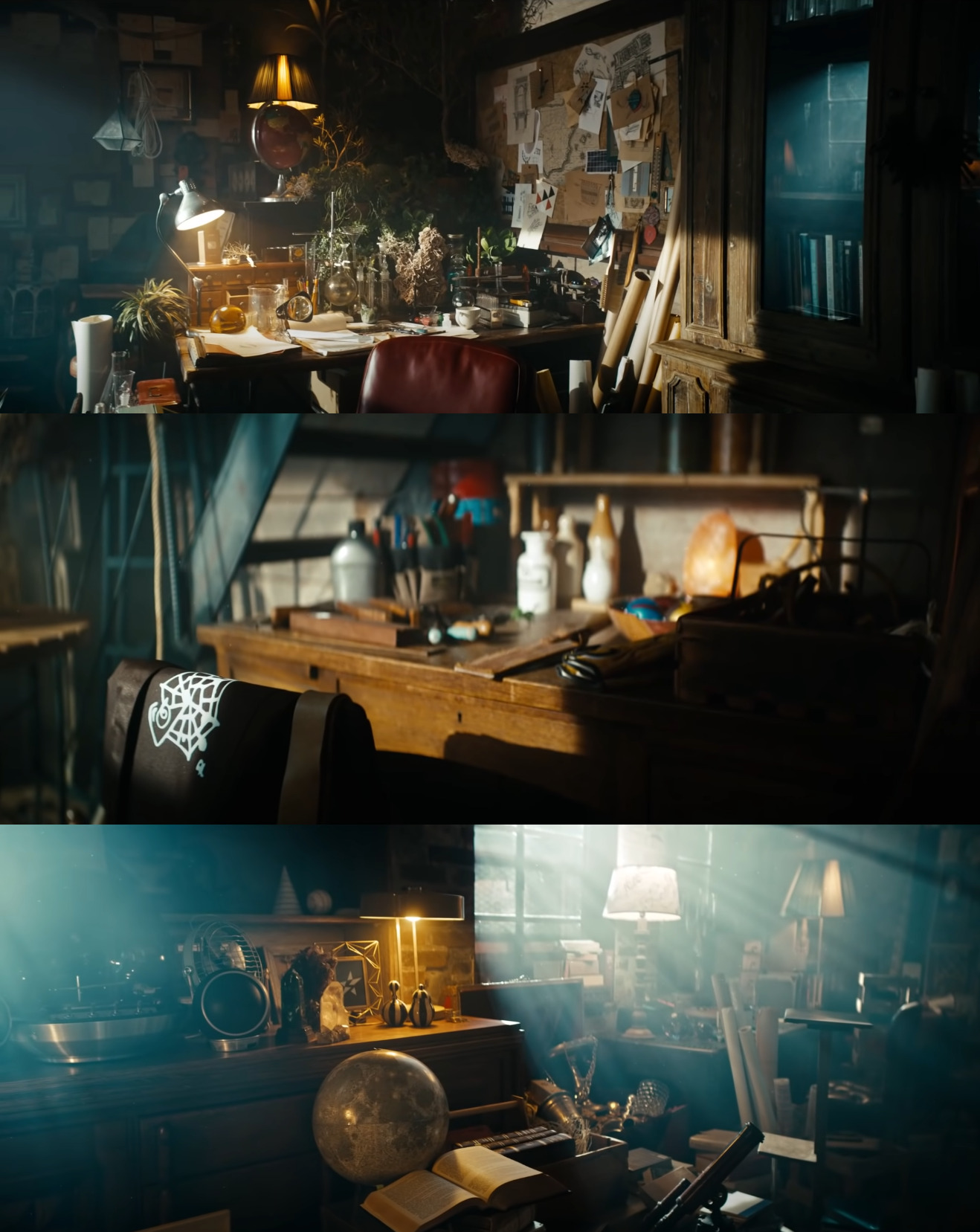 The large cork board also features various architectural sketches, but the hexagonal pattern sticks out. Perhaps it is merely an example of mosaic tiling, but something about it seems familiar to this writer.

While Sun and Moon ultimately showed small inspiration from elements of ancient alchemy, it may be the region’s use of triangular patterns that are giving a false-positive in my mind. 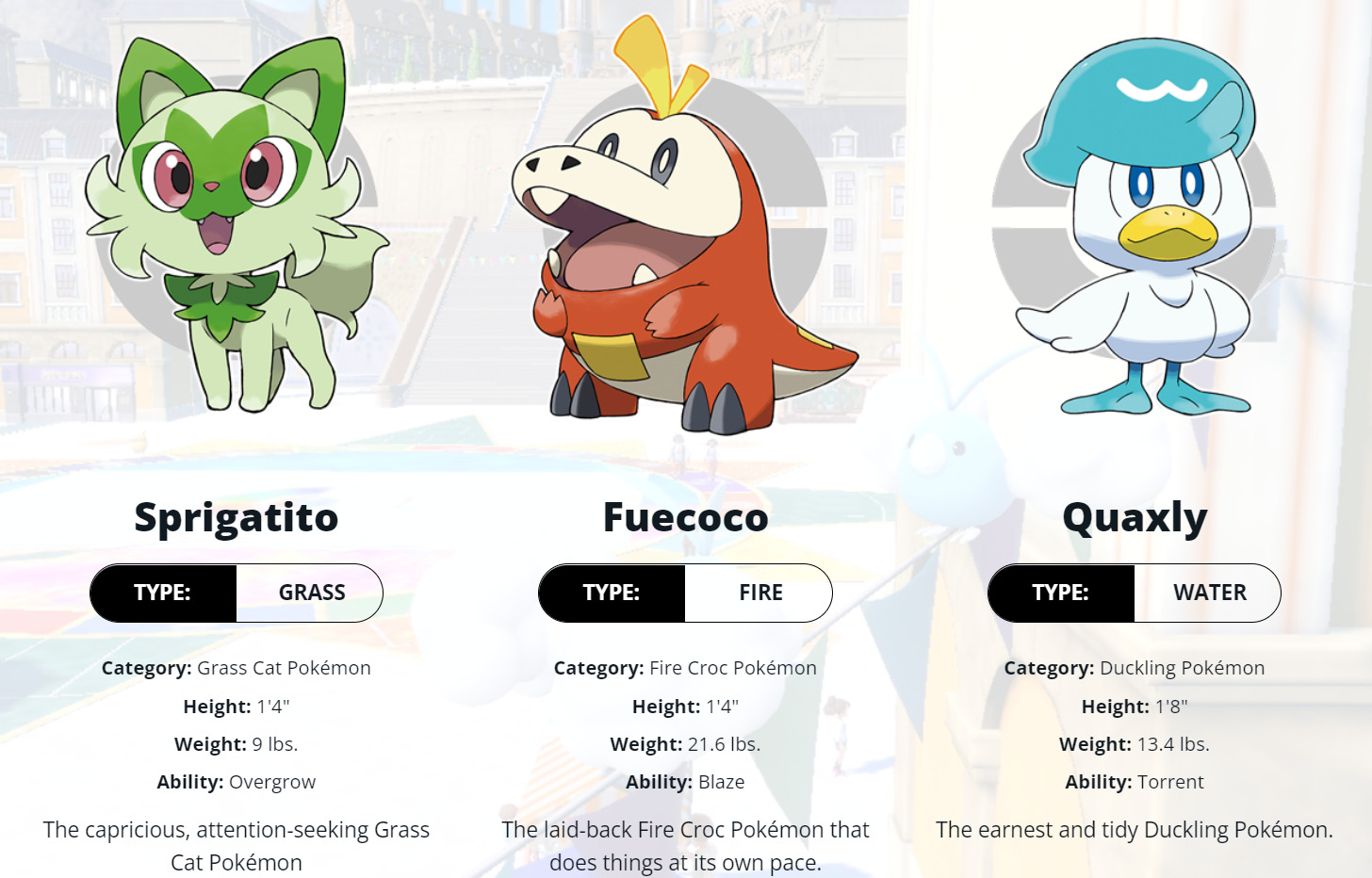 The Fire starter Fuecoco is also of note, as Fire-type starters have typically been inspired by the Chinese Zodiac by the time of their final evolutionary stage- Charizard being akin to the Dragon, Incineroar as the Tiger, and so fourth.

However, the closest Fuecoco would have to anything left in the Zodiac would be the Snake. It could be Fuecoco will take on a more snake-like form as it evolves- much like how Snivy loses its legs as it evolves into Serperior- or will simply have a long, slinky appearance. 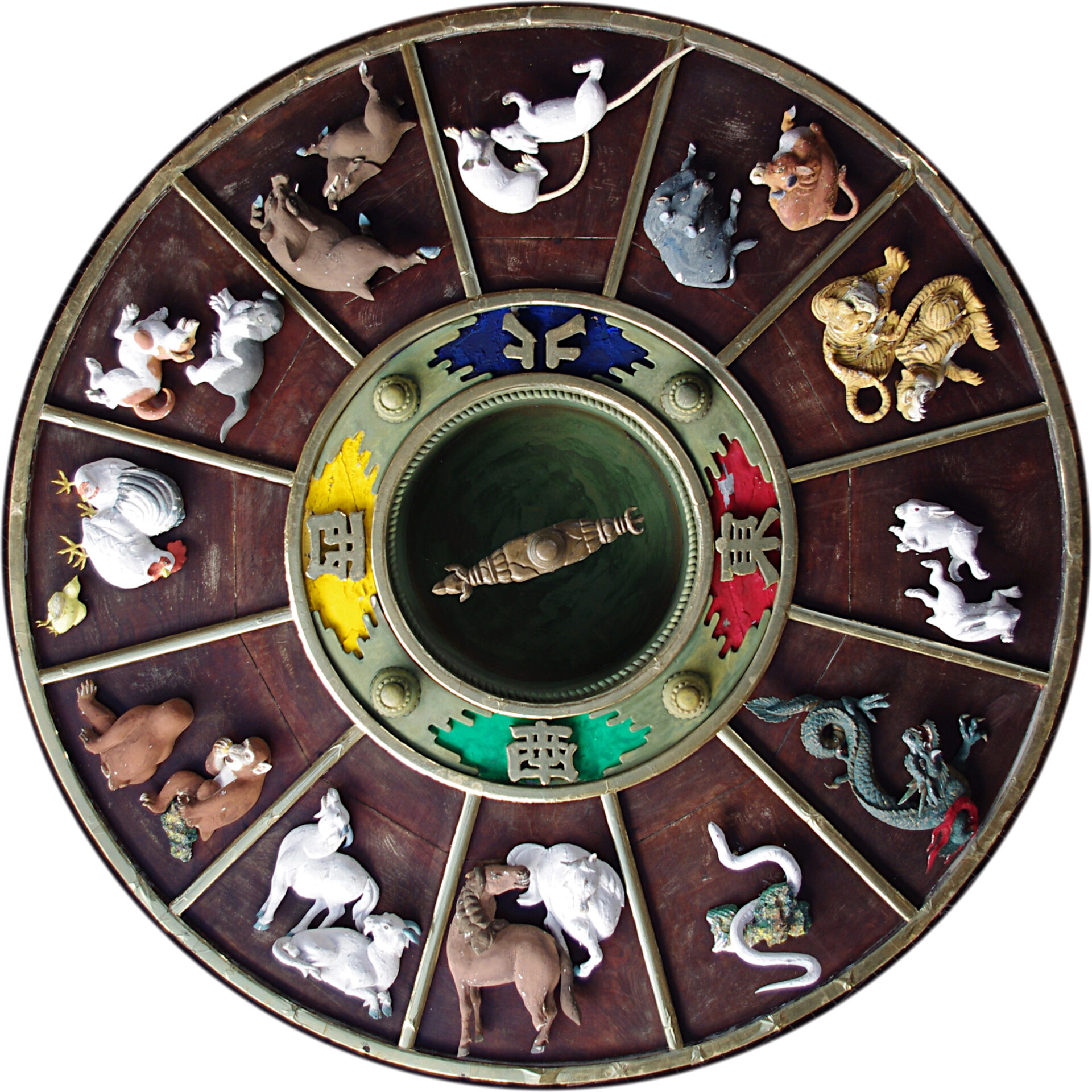 It should be noted Typhlosion fills in the role of the Rat, while it’s inspiration is actually a wolverine- still part of the Mustelidae family like rodents nonetheless. This is all assuming Game Freak haven’t simply tossed the Chinese Zodiac inspiration out the window.

You may also find it surprising a Pokémon seemingly based on an apple be a Fire-type. Despite it’s face, it may be based on the piquillo pepper- which originated in Spain. It’s body is also in the shape of a pepper, if we ignore the limbs. 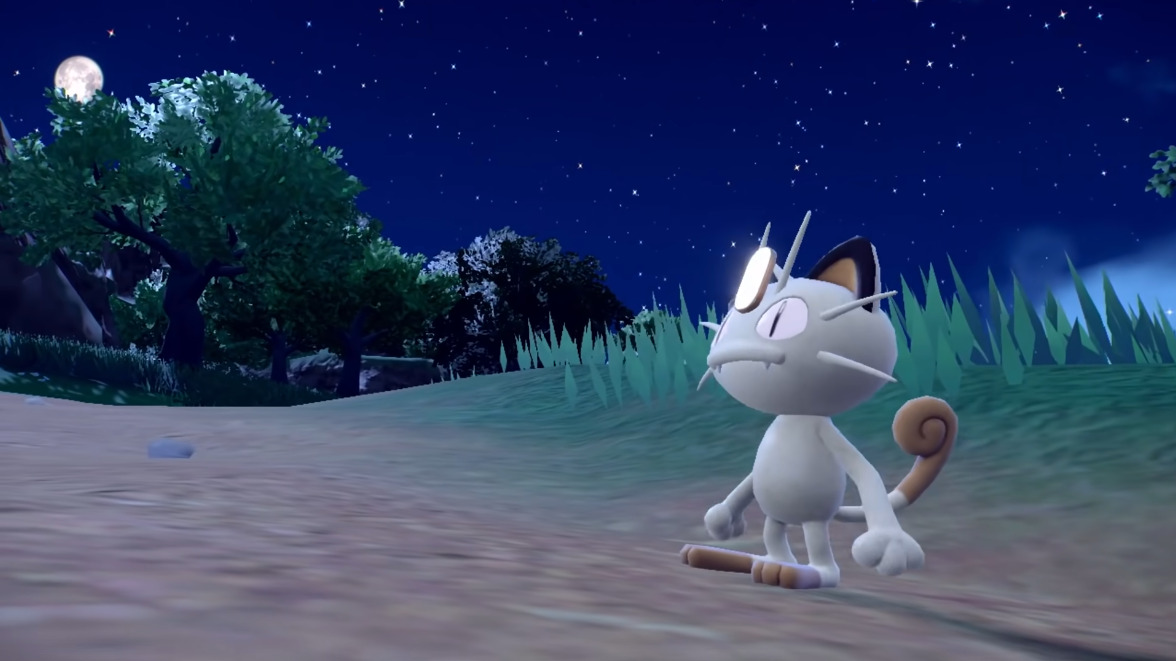 RELATED: Target Halts Sale Of Pokémon Cards In Physical Locations After A Fight In A Parking Lot Forced One Man To Pull A Firearm

While Meowth has had regional variants in each mainline Pokémon game since the concept was introduced, here we see Meowth in its typical default form. 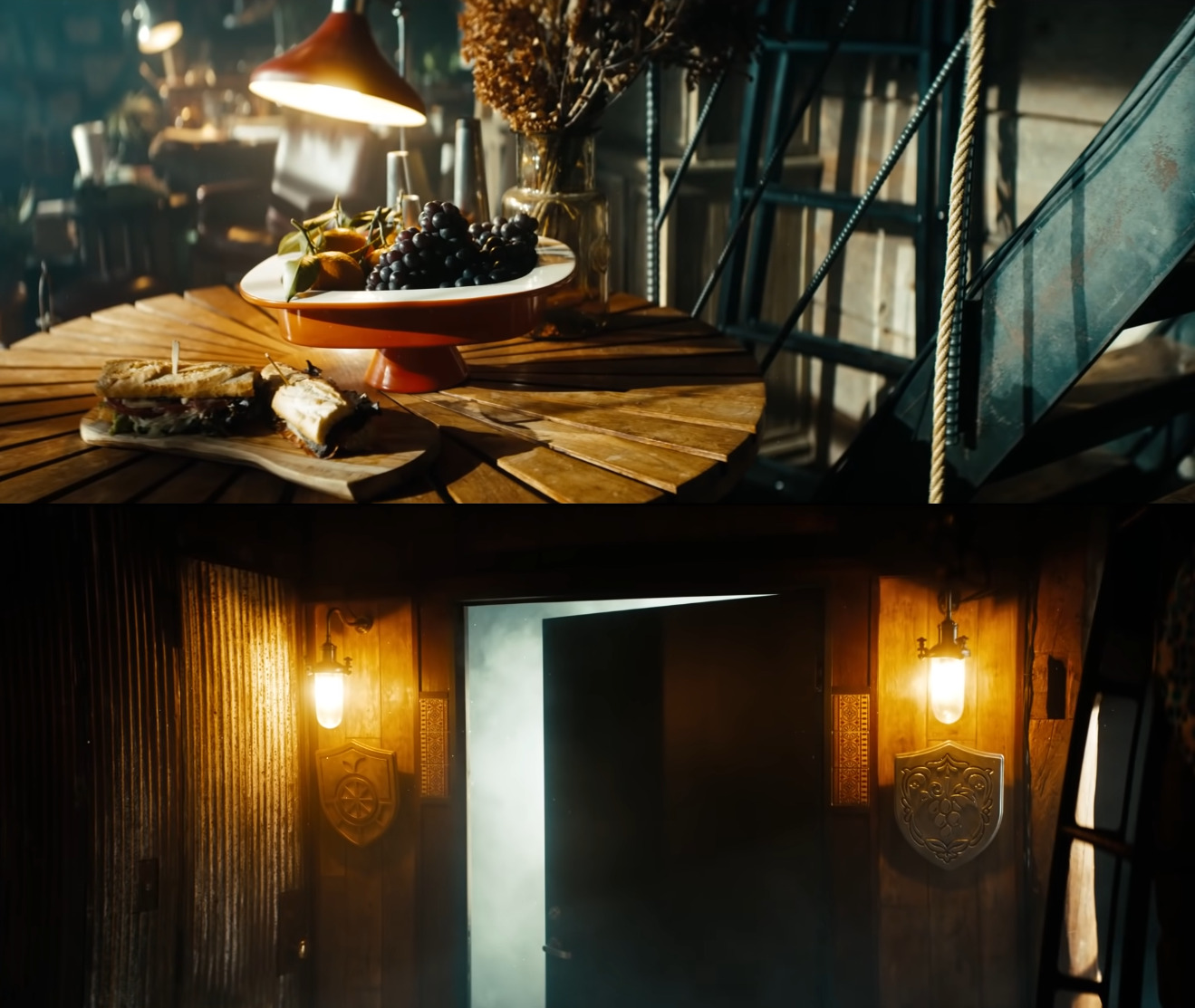 The study features a bowl of fruit with oranges and grapes in it, along with golden plaques either side of a door in the shape of them. Spanish New Year has the tradition of the Twelve Grapes- eating twelve grapes on each strike of the bell’s clock on new years for a month of good luck in the coming year.

Blood oranges- with red flesh rather than, well, orange- are also native to the Southern Mediterranean, and the Sanguinello variety was discovered in Spain in 1929. 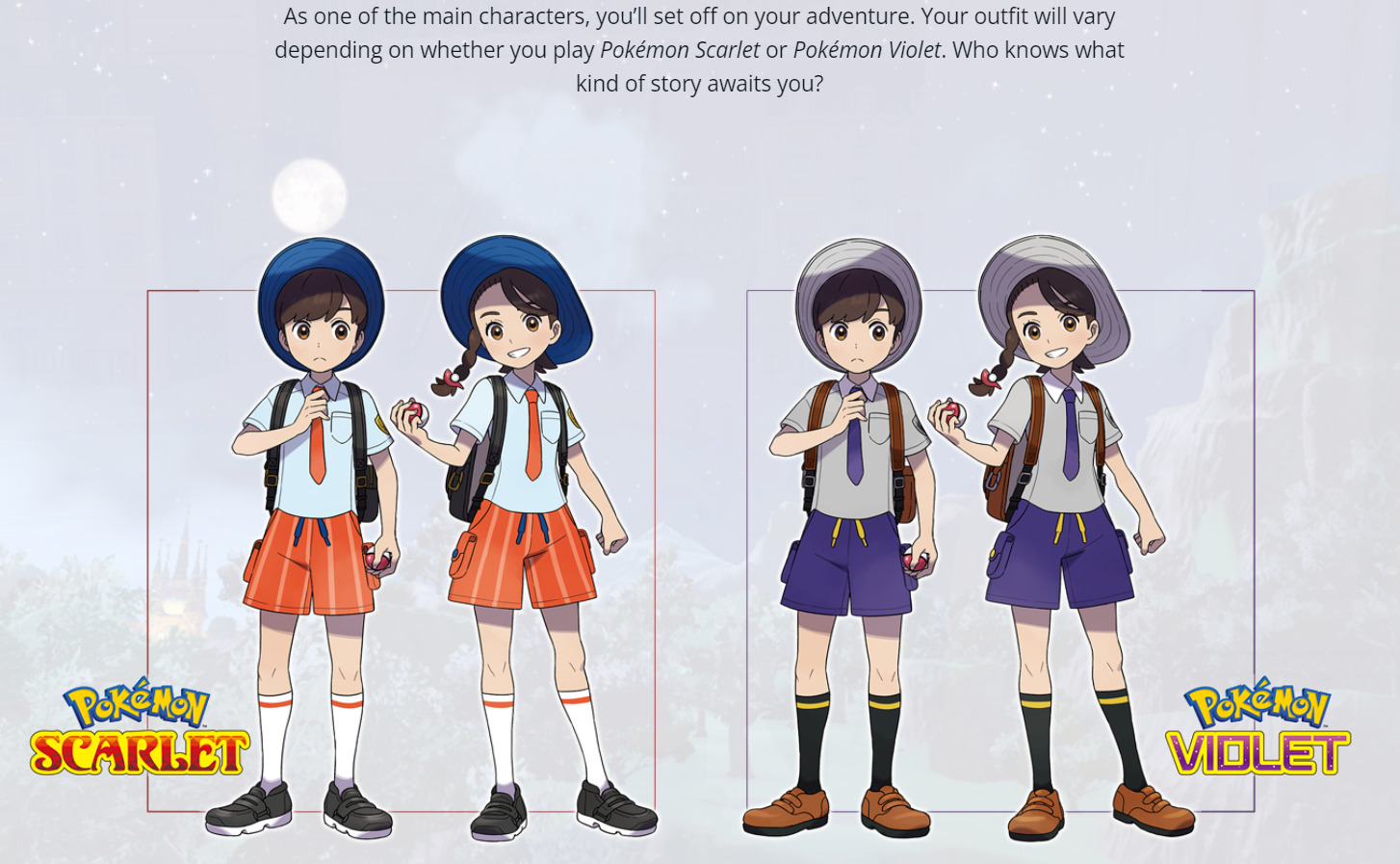 Combined with the school uniform of the different versions featuring orange and purple colors depending on the version, it could be the Legendary Pokémon appearing on the box for Pokémon Scarlet and Violet will be inspired by blood oranges and grapes.

Weird as that may sound, it may be this will be the loosest of inspiration, with the actual theme being something more intangible- such as beginnings and endings. If not for Moon’s Lunala, I’d have proposed a giant vampire bat for blood orange Scarlet version. Har har. 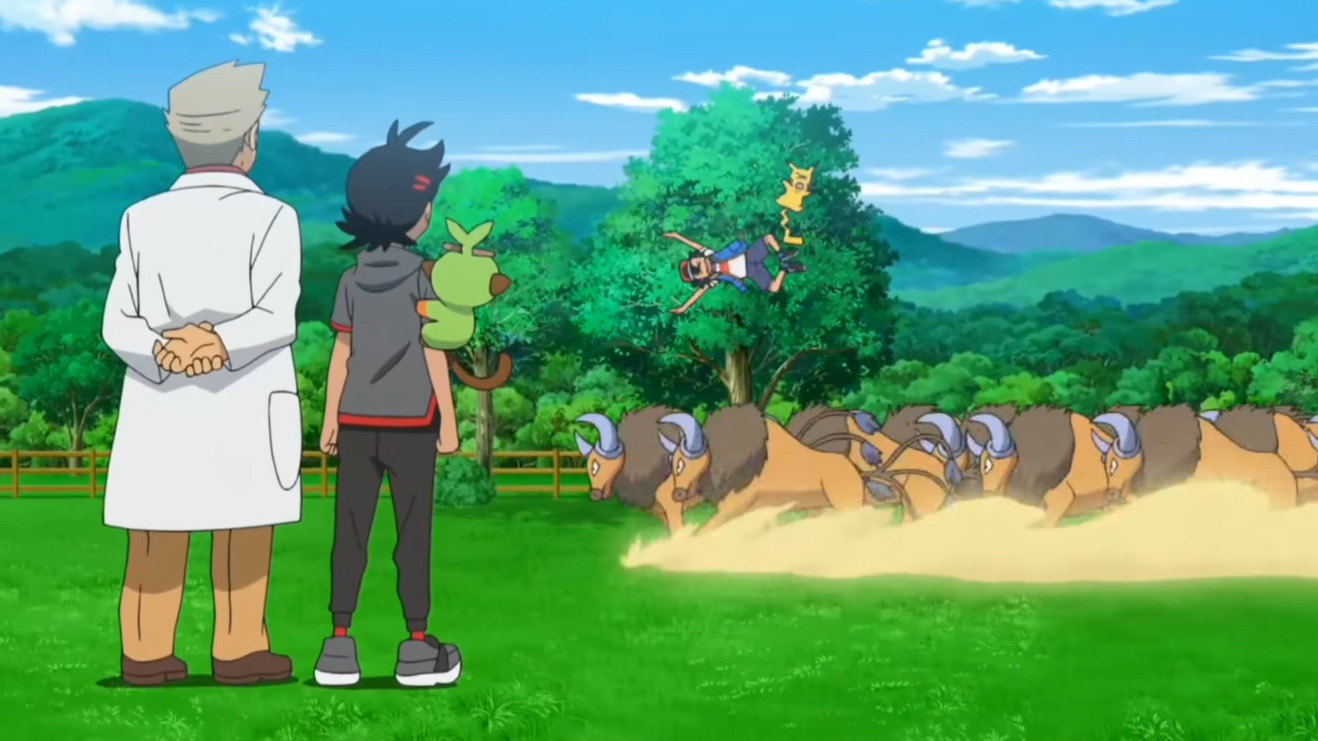 Spain is also famous, or infamous, for it’s bull fighting and running of the bulls. While Pokémon Legends was happy to see players trampled and worse by wild Pokémon- in a kid-friendly manner- we very much doubt you’ll see players turning Tauros into a beef kebab by their own hands. 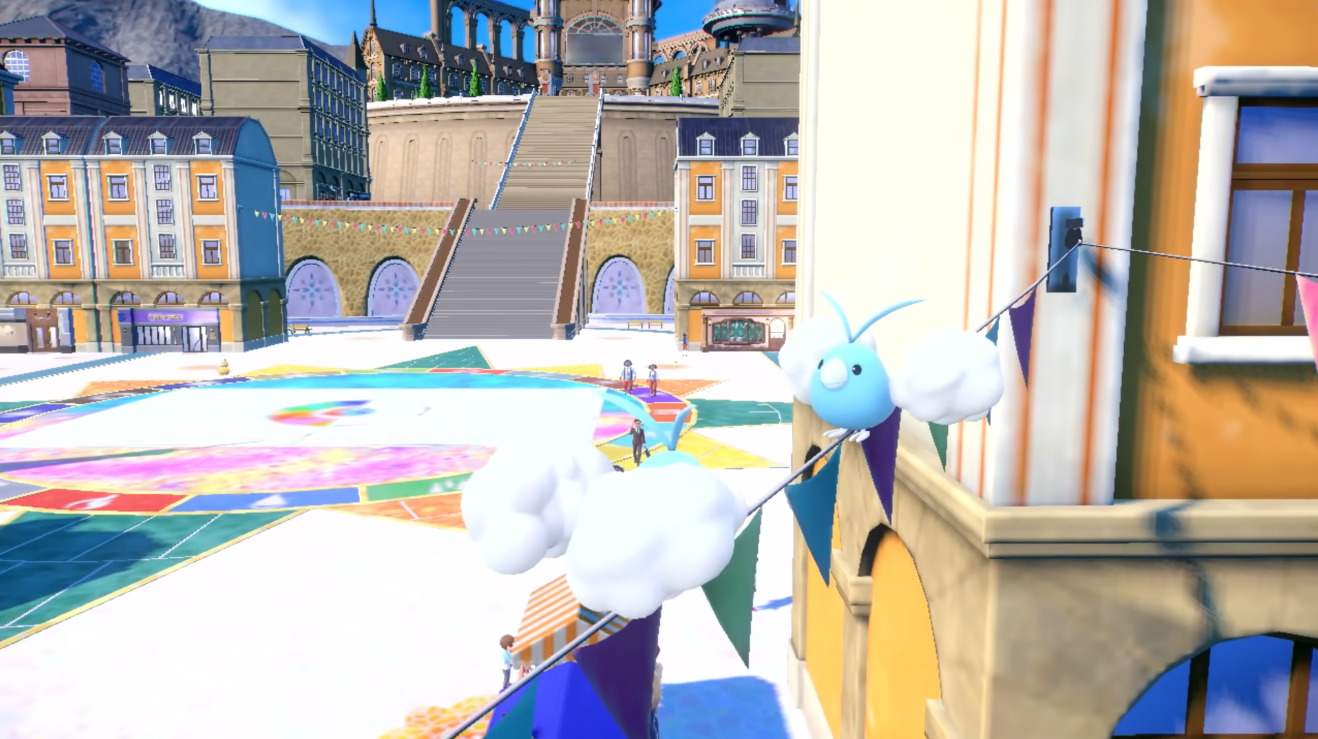 Perhaps we will see special battle modes where players or their Pokémon will need to dodge at the last second to befuddle and counter powerful foes? Running away from a stampede of Pokémon may also be quite possible after Legend Arceus.

The La Tomatina- a festival where people hurl tomatoes at each other- may also act as inspiration. Splatoon with Pokémon anyone? With numerous carnivals, festivals, and holy weeks, there should be no shortage of inspiration for Game Freak for extra modes or Pokémon themselves.

One last minor note is that the newest battle mechanic may have already been teased. Prior mainline Pokémon games’ Japanese logos have shown elements of their new mechanics.

X and Y had the Mega Evolution symbol, Sun and Moon featured a Z-Crystal, and Sword and Shield with Galar’s Pokémon League symbol- where most Dynamax battles could take place. The Japanese trailer shows an emerald with six points, though speculating on the mechanic will require more information. 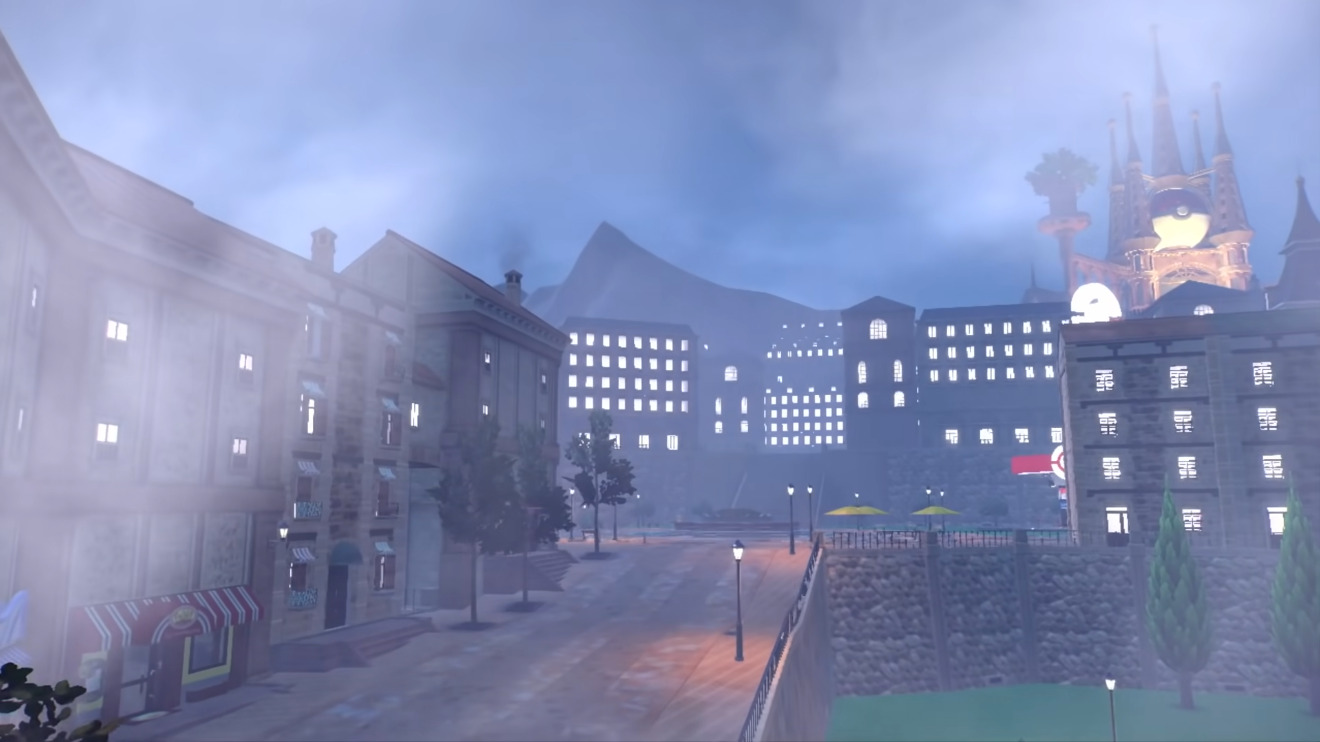 Pokémon YouTuber aDrive also noted in his discussion of the trailer- claiming everything in the study scene is placed as a hint or a detail- suggests that several astrology focused items could indicate more thematic elements.

aDrive also theorized the games would release on November 18th- the Friday before Thanksgiving- as prior Pokémon games had. Most mainline Pokémon games have had a mid to late November release since Pokémon Omega Ruby and Alpha Sapphire in 2014.

While the reception has largely been positive, there is certainly some rumblings of discontent, as some fans have felt in recent years Pokémon games have been rushed in production.

Fueled by lackluster graphics and not making all Pokémon transferable into newer games, some felt releasing two major titles in the same year would result in both being flawed in some manner.

“I love pokémon, im excited for gen 9, i will buy it, i will play it, and i will probably enjoy it,” madohomurat gushed, “but im devastated that a game this big is being rushed for NO. REASON this literally looks like garbage it looks like sims 3 terrain like please why does it have to be this year” 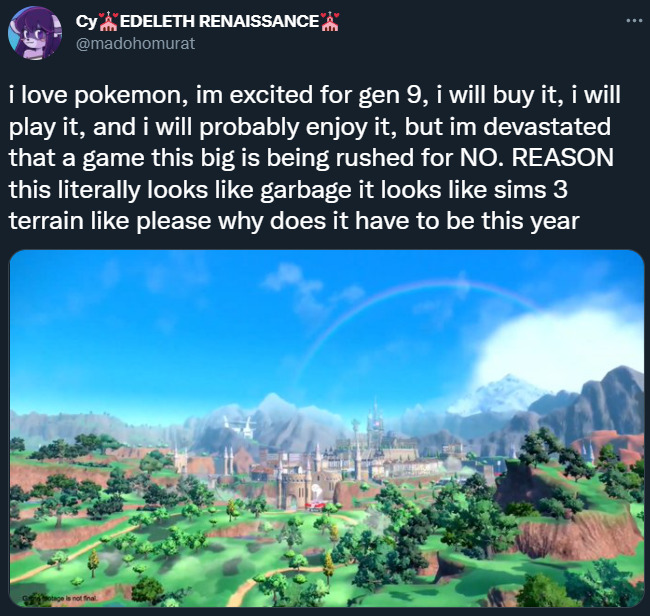 “We literally got one main Pokémon game just 4 months ago, and another one JUST A MONTH AGO,” pk4eva1 ranted, “Stop with the rushed dev cycles jesus christ…” 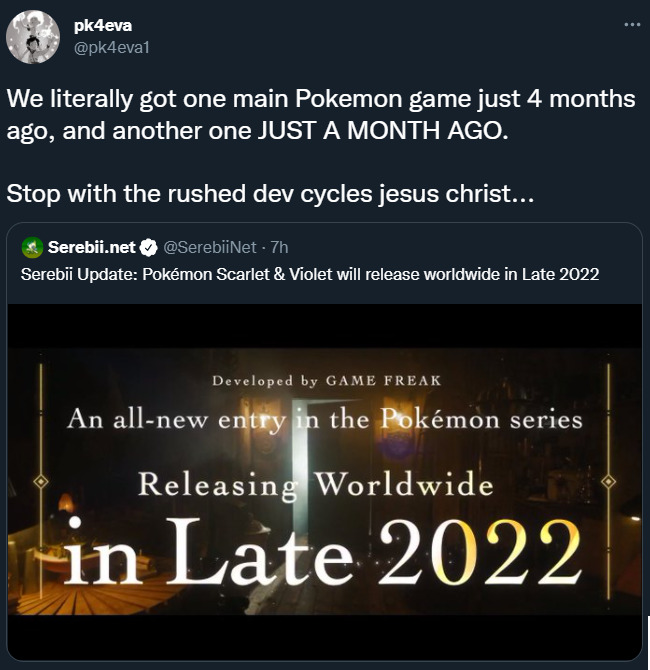 “Pokemon is still the highest grossing media franchise,” Ryemanni correctly stated, “They have all the money in the world. They should do better.” 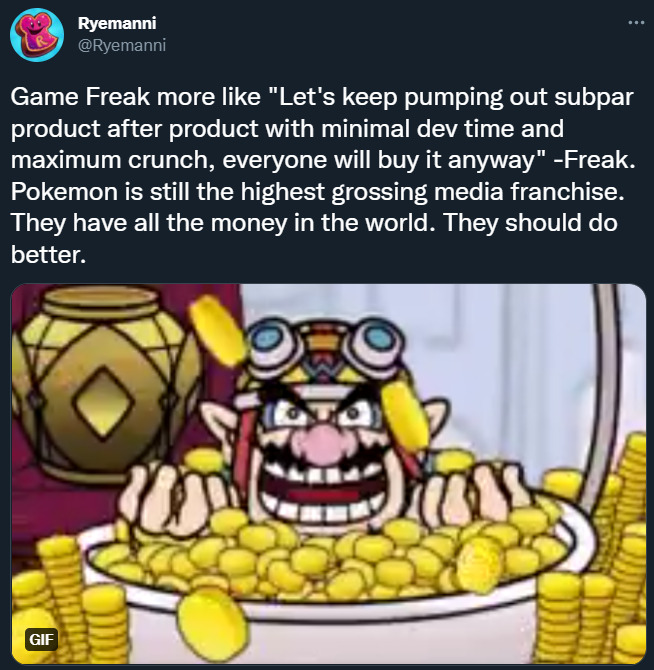 RELATED: Pokemon Fans Not Happy After Alleged Pokemon Sword & Shield Leaks Reveal Half of All Pokemon Cut From Game

Corvid_lenore lamented “Theres like no hype no build up and no time to make a good well thought out game when you pump out mediocre yearly releases.”

“AGREED” quote retweeted mysicksadlife. “my main issue with pokemon as a franchise is crunch. I don’t actually need a new pokemon game or remake every 2 years.”

“A new gen every 5 years would be fine,” mysicksadlife proposed “and give the devs time to release a finished, polished game not riddled with bugs and glitches (@ BDSP [Brilliant Diamond, Shining Pearl]).” 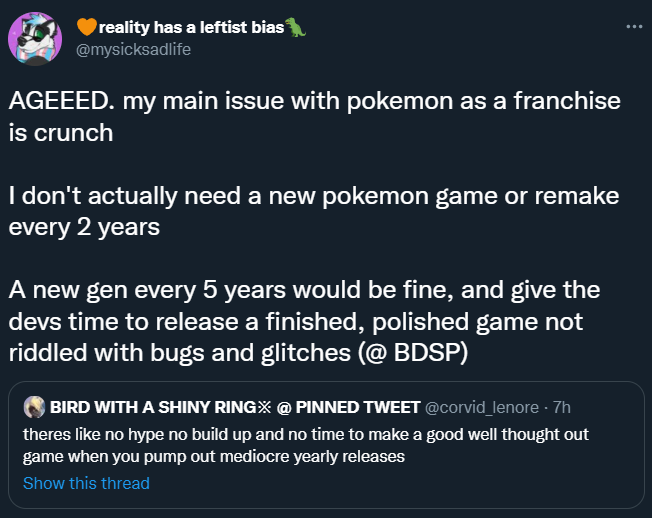 “I can’t believe it’s dropping this year LOL,” tweeted DistantKingdom, a frequent critic of recent Pokémon titles on his YouTube channel. “They already dropped 2 major titles and they’re dropping another massive one, all within a single year of each other?” 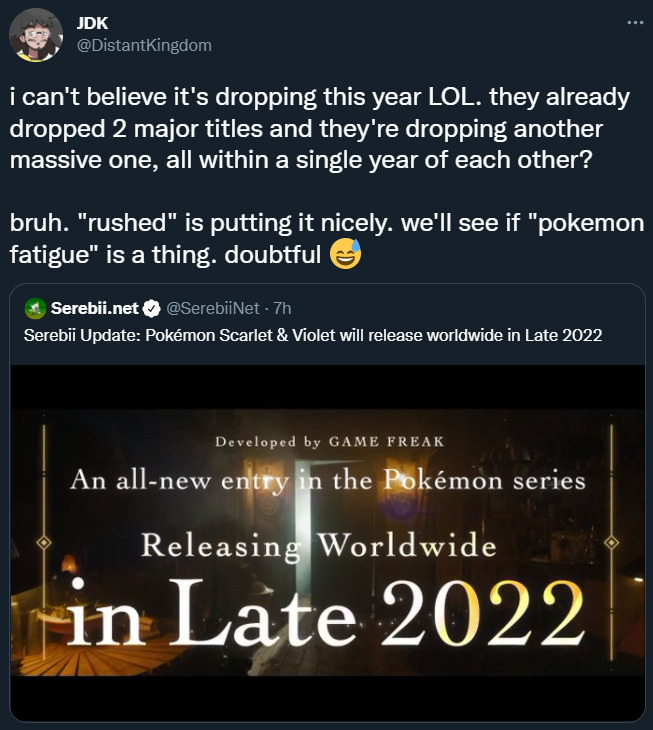 Are you excited for Pokémon Scarlet and Pokémon Violet? Is it too soon for another game? Let us know on social media and in the comments below.

NEXT OPINION: Fantastic Animated Bidoof Short Begs The Question, Why Can’t Pokémon Always Be This Good?