Musician Richard Marx known for his hit song “Right Here Waiting For You” called those who oppose critical race theory traitors and enemies of democracy. He also went after actor Nick Searcy calling him a “traitorous assbag.”

Marx took to Twitter where he wrote, “To those of us who are ACTUAL patriots, it is and has always been crystal clear. If you’re a white nationalist…if you’re praising Putin…if you’re against CRT…if you want to make it harder for POC to vote…if you defend January 6…you are a traitor and an enemy of democracy.” 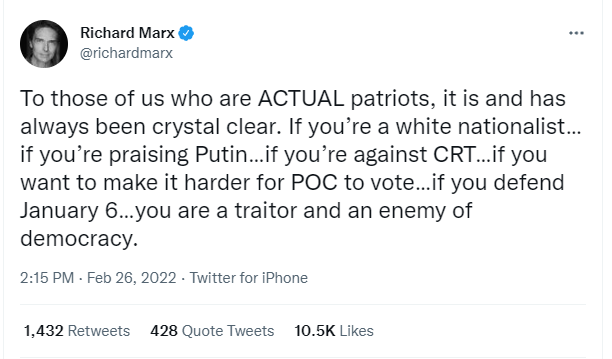 RELATED: Terror On The Prairie Actor Nick Searcy Explains Why He Named His Horse Brandon

This tweet would draw the attention of trial lawyer, Army veteran and political pundit Kurt Schlichter who responded, “While he was making shitty music some of us were serving in the Cold War.” 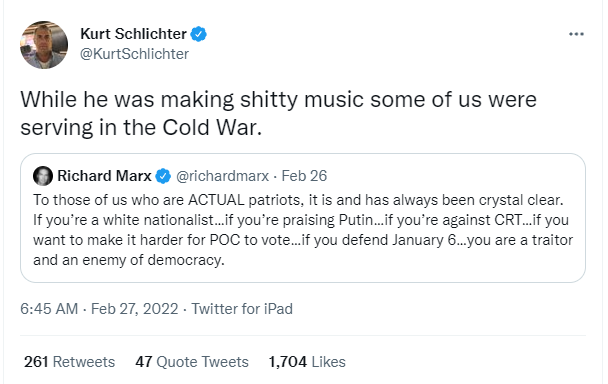 Marx would then accuse Schlichter of being a member of the Ku Klux Klan and a white nationalist tweeting, “Here’s an overview of KKKurt’s career highlights. This white nationalist prick is such a failure even OAN won’t give him a gig.”

He then proceeded to share a screenshot from an article titled “Kurt Schlicter is the nutjob of the moment” on The Outline written by Alex Nichols. 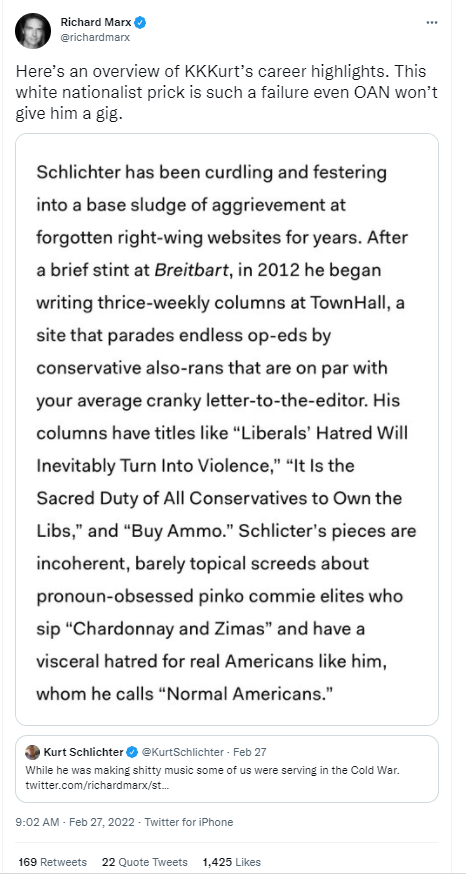 Schlichter responded by suggesting Marx join Ukranian forces and take up arms against the Russian.

He wrote, “Richard, Ukraine is welcoming brave studs like you to go fight instead of running your sissy mouths like bitches. You should go and inspire them with you special brand of unchallenging AM filler.”

Searcy would then respond to this tweet writing, “I hear Richard Marx has cancelled his gig in front of 35 snoring fans at the Franklin Theatre (capacity: 630) so that he can go help the Ukrainians by singing to the Russian soldiers, thereby causing many of them to commit suicide.” 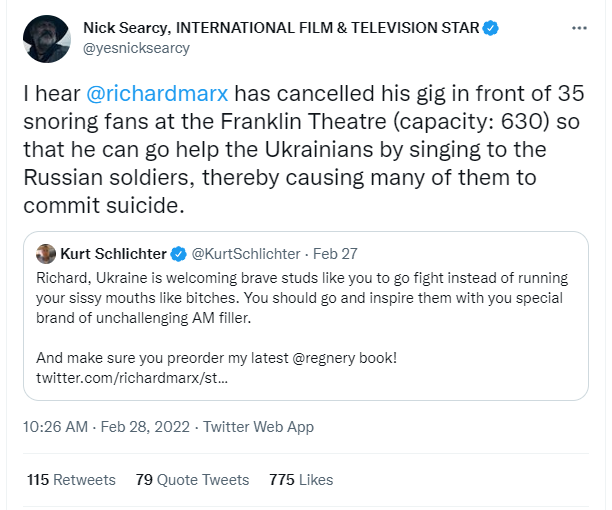 Marx would respond by calling Searcy a “traitorous assbag.”

He wrote, “Incorrect, Nick. Playing three nights at that beautiful theater. Just me and my guitar. So grateful after 35 years to still be touring.”

“Though your acting career is toast it’s nice to see your side-gig as a boring traitorous assbag is thriving,” he added. 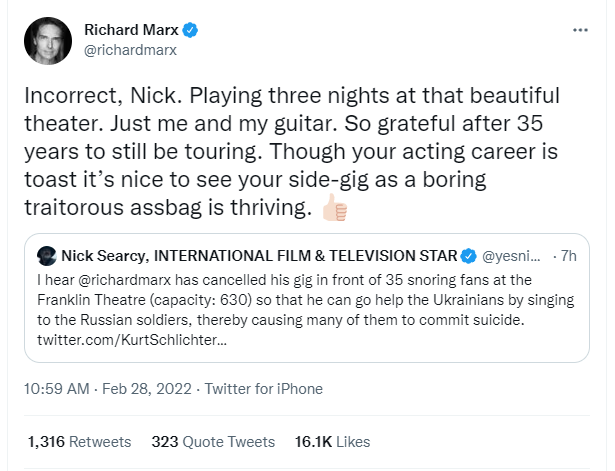 RELATED: Justified Actor Nick Searcy: Leftists “Have Ruined The Greatest Country That Has Ever Existed On The Face Of The Earth”

Searcy rebuked this assertion writing, “Sorry I can’t make it there to hear your 80s hit, Richard. I’ll be shooting the 4th feature film I’ve done in the past 12 months, all of which will be released in 2022.”

He added, “But thanks for writing! Write back if you ever write a new song! Maybe I’ll hear it in an elevator someday!” 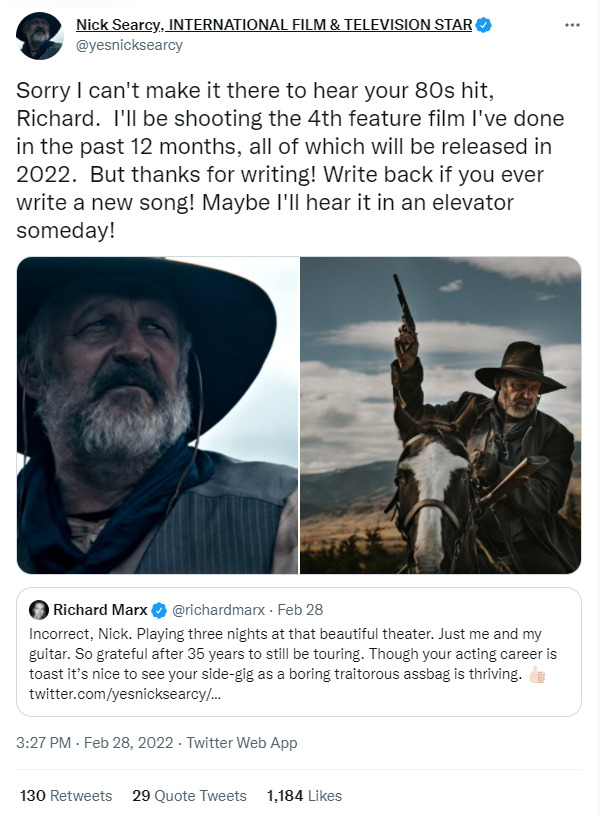 Marx would go on to describe Florida Governor Rick DeSantis as “DeathSantis” and a “disgrace to human decency.” 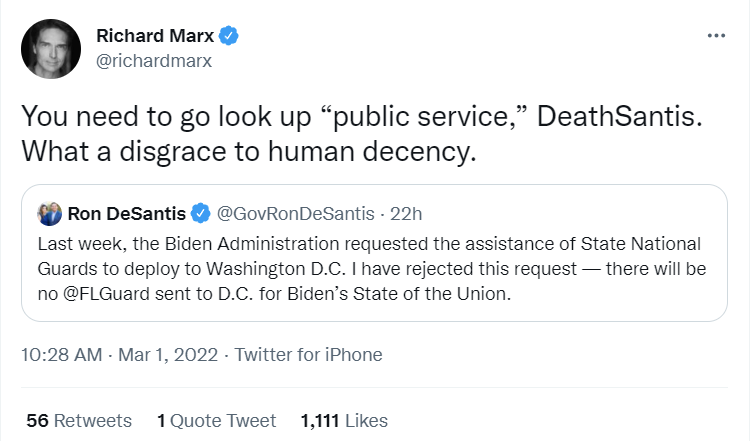 Marx tweeted, “My first presidential election vote was for a Republican. I’ve voted for both parties ever since, depending on the candidates. But this is the current GOP. You’re either a bigoted, degenerate white nationalist or you’re a decent person. You can’t be both.”

My first presidential election vote was for a Republican. I’ve voted for both parties ever since, depending on the candidates. But this is the current GOP. You’re either a bigoted, degenerate white nationalist or you’re a decent person. You can’t be both. https://t.co/a27UWuseYX

What do you make of Marx’s comments and Nick Searcy’s response?

NEXT: Terror On The Prairie Actor Nick Searcy Describes The America The Left Wants: “A Country Where Anyone Who Disagrees With The Left Is Silenced, Shunned, And Disappeared”