Terror on the Prairie actor Nick Searcy recently took to Twitter to describe what the Left wants to turn America into.

Searcy’s comments came after an apolitical interview that he had scheduled to do with Jacqui Denker of The List was cancelled.

The actor explained, “Just so everyone knows what is going on in America today, I was booked weeks ago for an interview today on The List. The subject was going to be about my acting career, if I had any advice for young actors, etc. with Jacqui Denker. It was not be a political interview.” 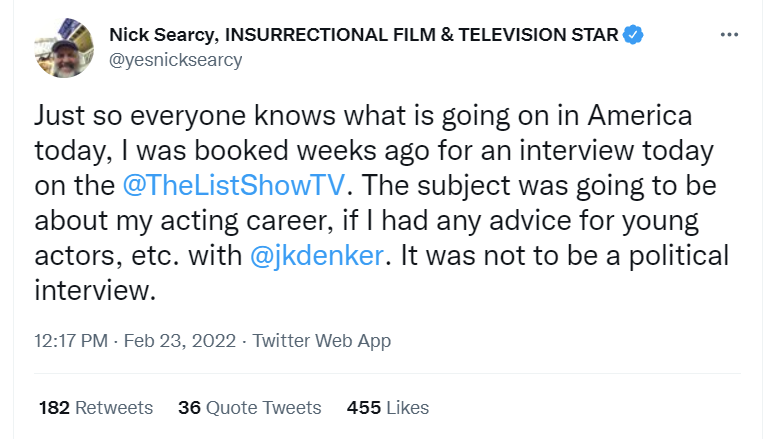 RELATED: Terror On The Prairie Actor Nick Searcy Explains Why He Named His Horse Brandon

“Ten minutes before the interview was to begin, Jacqui Denker’s ‘boss,’ whoever that is, cancelled the interview,” Searcy elaborated. “Apparently they looked me up and decided that since I am not a Democrat, I’m not allowed to be interviewed on their show about my acting career.” 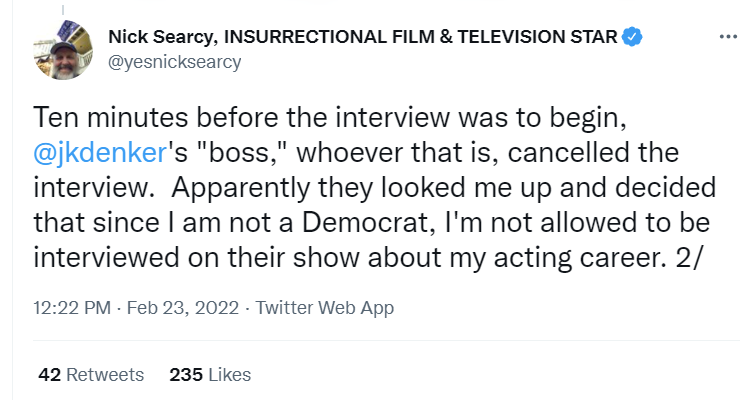 The actor goes on to state, “To be clear: this is not Jacqui Denker’s fault. This is the fear factor running through America, and especially in Hollywood, today. The List is afraid to be ASSOCIATED with me because I have a different political view than most of Hollywood. This is the tolerant Left.” 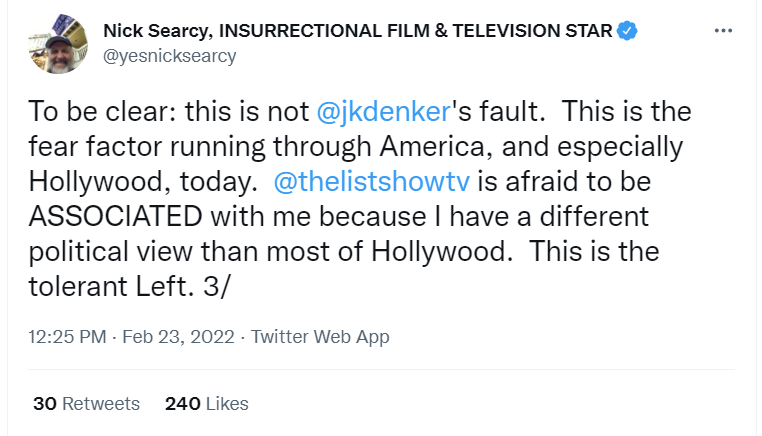 “The Left is trying to ‘unperson’ me and anyone like me because they are afraid that they will be accused of giving me a ‘platform’ — even if the agreement going in was that the interview would be about my acting career, and not about anything political,” Searcy asserted. 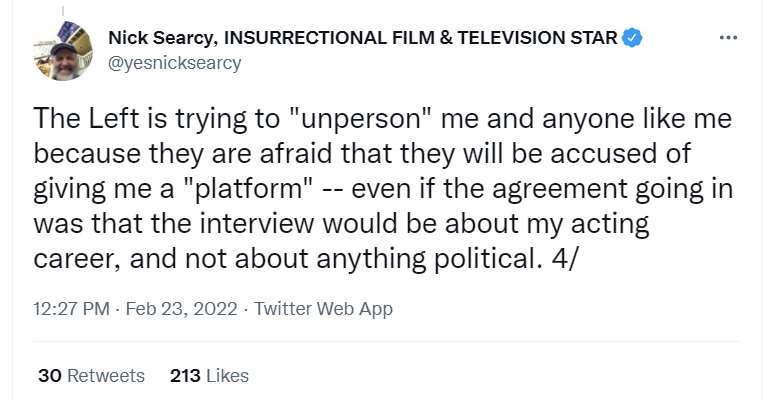 He then laid out what he believes the Left wants to do to America, “This is the America that the Left wants — a country where anyone who disagrees with the Left is silenced, shunned, and disappeared.”

“The sickest part is that they no longer have to go to the trouble of physically murdering you. That is messy, and a lot to clean up,” he added. 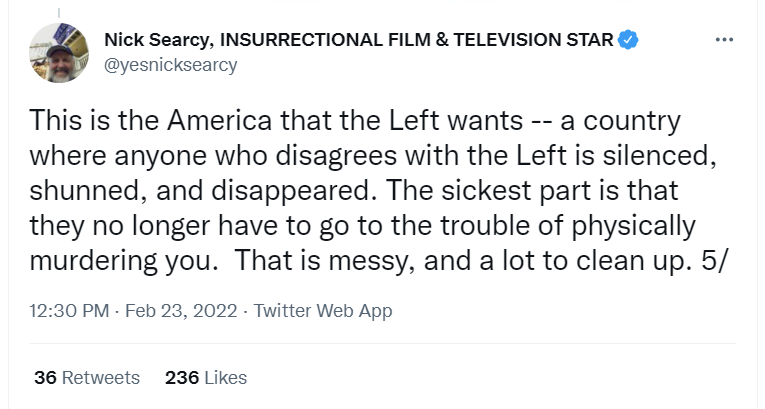 Searcy continued, “Now they can just ERASE you, remove you from social media, refuse to hear your voice, demonize you, call you a racist extremist white supremacist or whatever the popular demonizing language of the day is, and make it impossible for you to function unless you toe the line.” 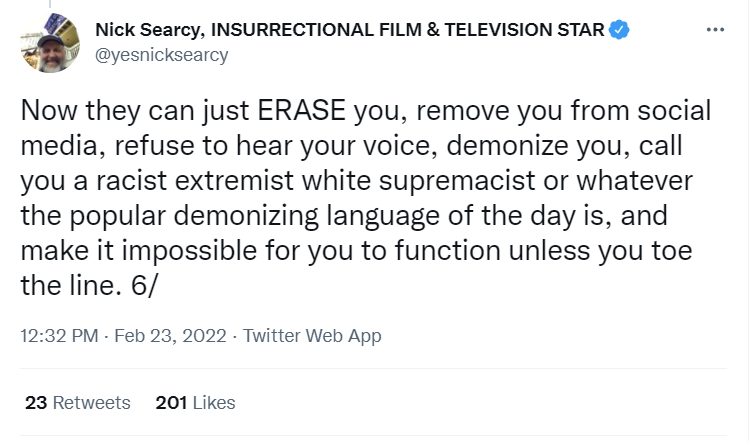 Searcy then warned, “Make no mistake: THAT IS COMING HERE. This is just a small example of where it will go.” 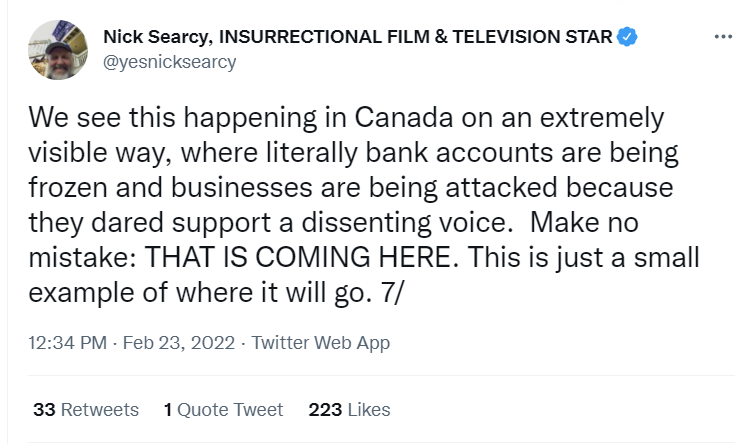 The actor continued the thread writing, “No, it is not a big deal that The List doesn’t want to recognize or talk about my 30 year career. I’m just a character actor, and not that important in the scheme of things.”

However, he notes, “The reason WHY they won’t talk to me is big deal. The Left ALWAYS criminalizes dissent, and they also create a climate of fear where people like Jacqui Denker’s boss are afraid to be associated with people like me.”

Searcy then posits, “And then they will argue ‘Well, it’s their choice not to interview you!’ after they have pervaded the society with a fear of retribution if they do.” 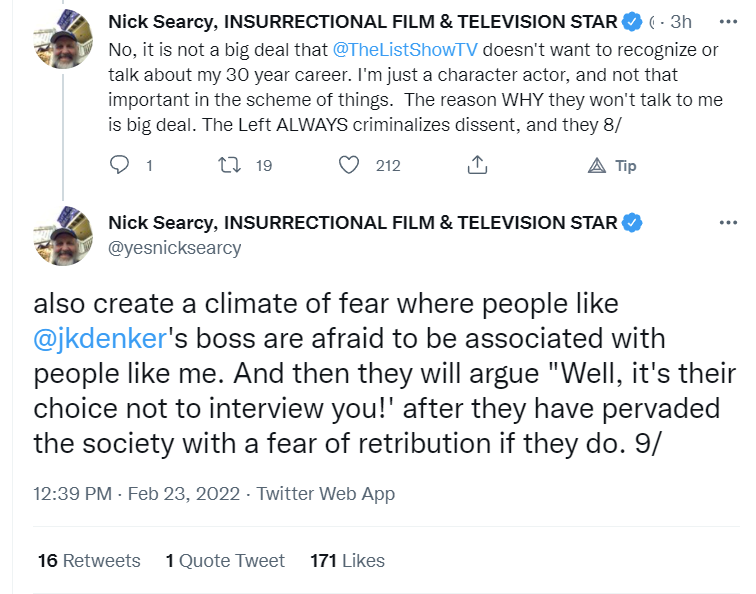 The Justified actor declared that a parallel economy and society must be formed to combat this, “It is sick and will not stop. We MUST create a separate media, a separate entertainment system, a separate information delivery system. Because they do not want ‘unity.’ THEY WANT CONFORMITY.

“The List is a minute but perfect example of the intolerance of the Left,” he tweeted. 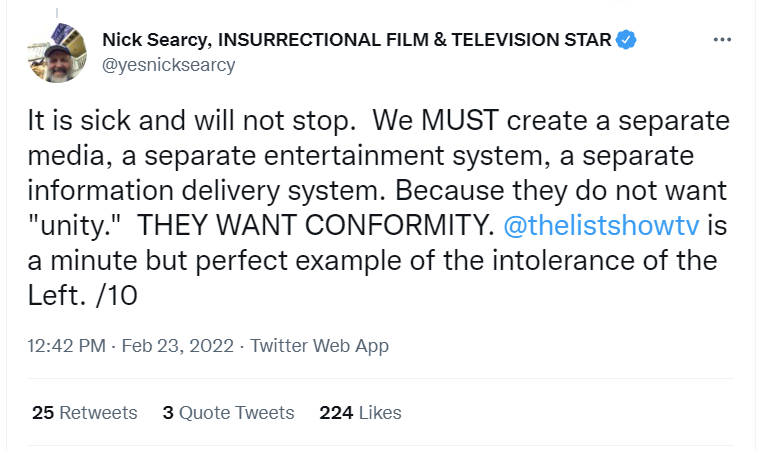 Searcy concluded his thread stating, “You cannot ‘coexist’ with people who want to erase you from existence.”

“My thanks to Jacqui Denker again, who had nothing to do with my cancellation,” he ended the thread.

Searcy is not alone in this opinion. YouTuber Eric July asserted in a recent video, “They f***ing hate you. And they’re bold enough because they control so much to tell you that they don’t f***ing like you.”

He also noted that “they’re on the attack. They have not stopped and they don’t plan on stopping.”

Like Searcy, July advocated for a parallel economy stating, “Creators getting in these spaces and being unapologetic about who is that they are, but most importantly packaging their stuff in a way that’s competitive. Not just for the sake of doing.” 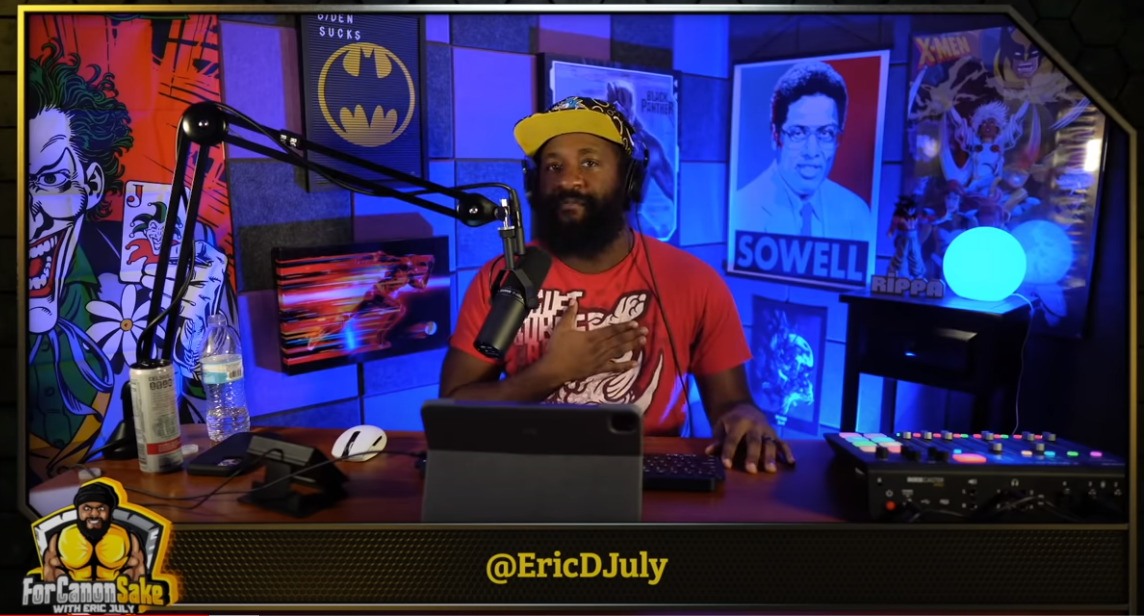 “It’s baffling to me how people do not recognize the urgency of the situation we are in. We have lost so much over the past 18 months and we will never get it back unless we start taking a stand right this second,” he added. 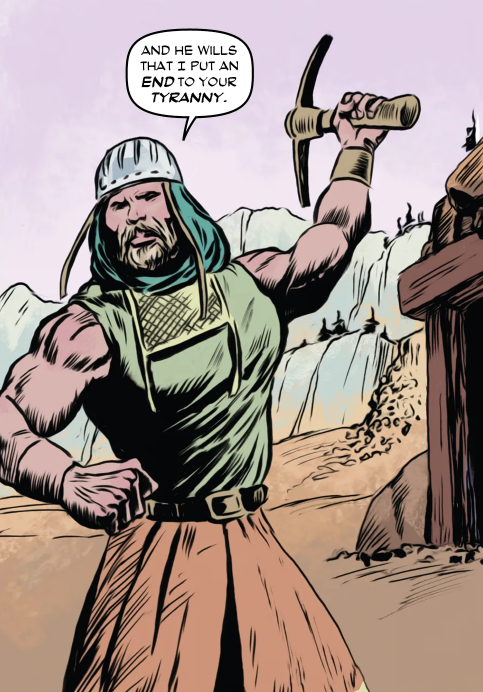 RELATED: Justified Actor Nick Searcy: Leftists “Have Ruined The Greatest Country That Has Ever Existed On The Face Of The Earth”

As for what a parallel society looks like, he shared his vision, “It looks like homeschooling your kids, turning off the television, deleting your Facebook account, reading your Bible, spending more time with your kids, moving to a better area near people who share your values, getting involved in local instead of national politics, finding a church that isn’t woke, supporting businesses who support your values, consuming content from people who share your values, and radically removing each and every last corrosive system of control and fear of the globohomo society from your life.”

He notes, “It won’t be easy, nothing worthwhile is, but it can and is being done by so many people in your exact position.” 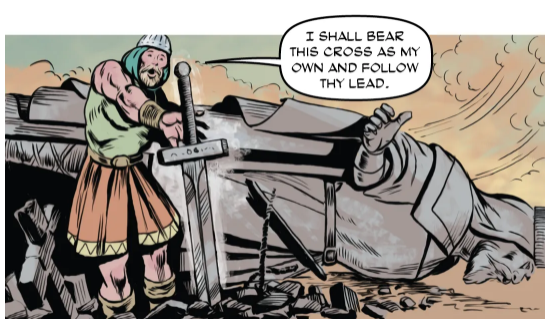 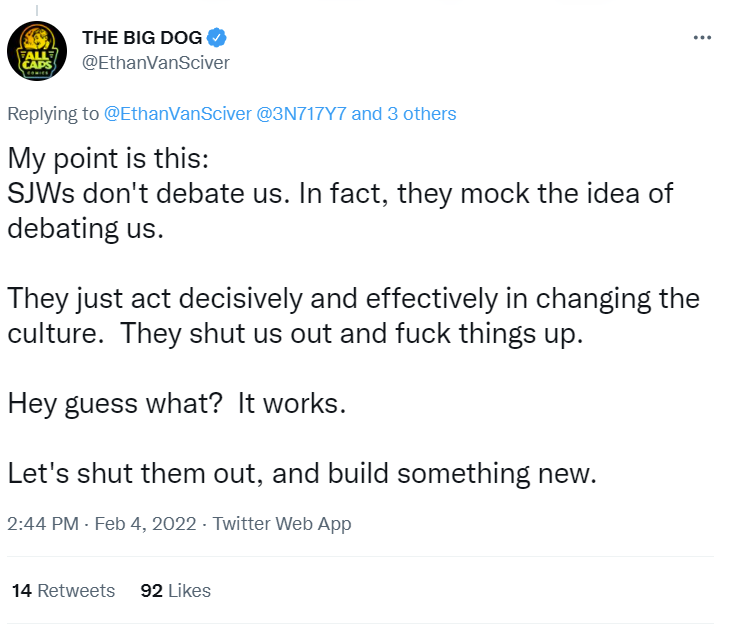 Needless to say, there is a significant movement to create a parallel economy and society that is not reliant on the current sociopolitical and economic structures that are reliant are giant mega corporations. 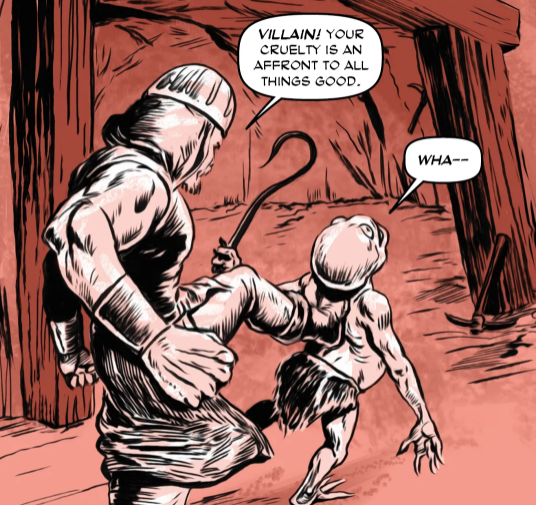 What do you make of Nick Searcy’s comments? Do you think a parallel society and culture is the way forward?