Since there’s a new Batman film in theaters which is officially non-canonical to the DCEU, I figured I’d draw attention back to the last major thing Warner Bros. gave us set in the contemporary post-Snyder DC film continuity: James Gunn’s Peacemaker series on HBO Max. 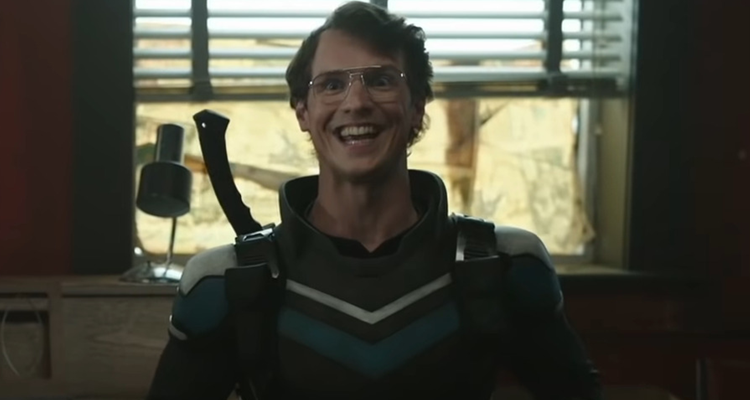 This series is getting a lot of praise, with some calling it the best show DC has to offer (those people obviously missed Swamp Thing and the first season of Superman & Lois), but I’ve got to say what HBO Max thinks is a big deal – much like its predecessor and inspiration The Suicide Squad – is neither that special or original.

More to the point, I think Gunn has once again hoodwinked everyone into watching the same old thing he makes all the time – a script full of tiresomely crude jokes, albeit this time with a new cast. 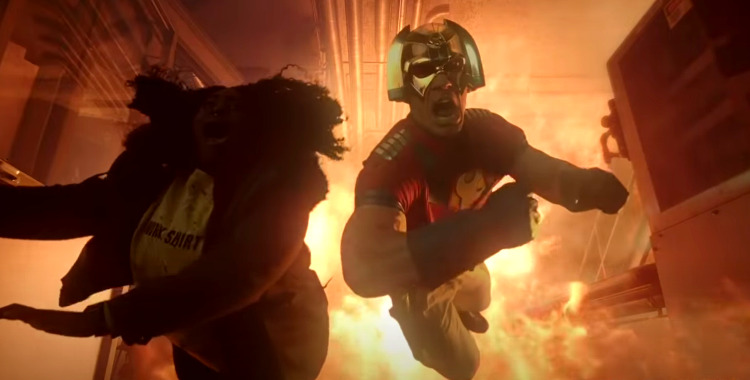 Having survived the mission that went awry in Corto Maltese, Christopher Smith, better known as our title antihero Peacemaker (John Cena), gets out of the hospital and is recruited again by Amanda Waller (Viola Davis in a few cameos) to join a team trying to quietly clean up another mess.

Yet again, it’s an alien invasion that threatens to take over minds and destroy humanity although, this time, it’s hitting small-town America. 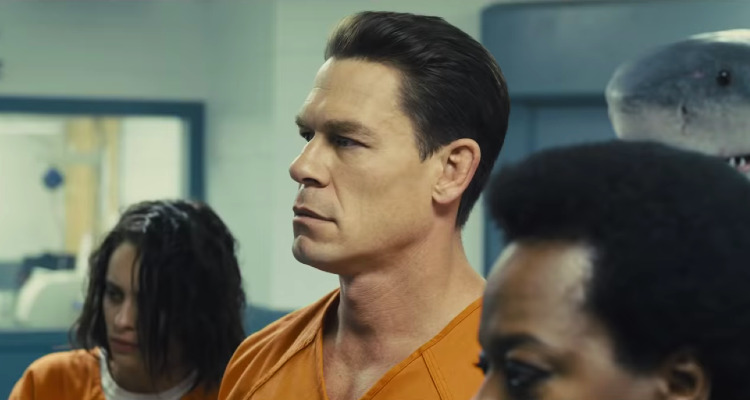 Smith also reconnects with his father, Auggie (Robert Patrick), only to fall out with him again as he wrestles with the guilt of killing to keep the peace.

Now is probably the time to mention Auggie is not only an ex-con and the high-ranking white supremacist super-villain The White Dragon, be he also just so happens to be the inventor of all the Peacemaker tech, including his son’s shiny headgear.

Father and son come to blows in a final confrontation, but Smith’s real mission is stopping the body-snatching, alien “Butterflies” from teleporting a “cow” that keeps them alive to an undisclosed location before they can take over the world and annihilate its people for their trespasses against the planet – or, in other words, the damage they’ve done to the environment. 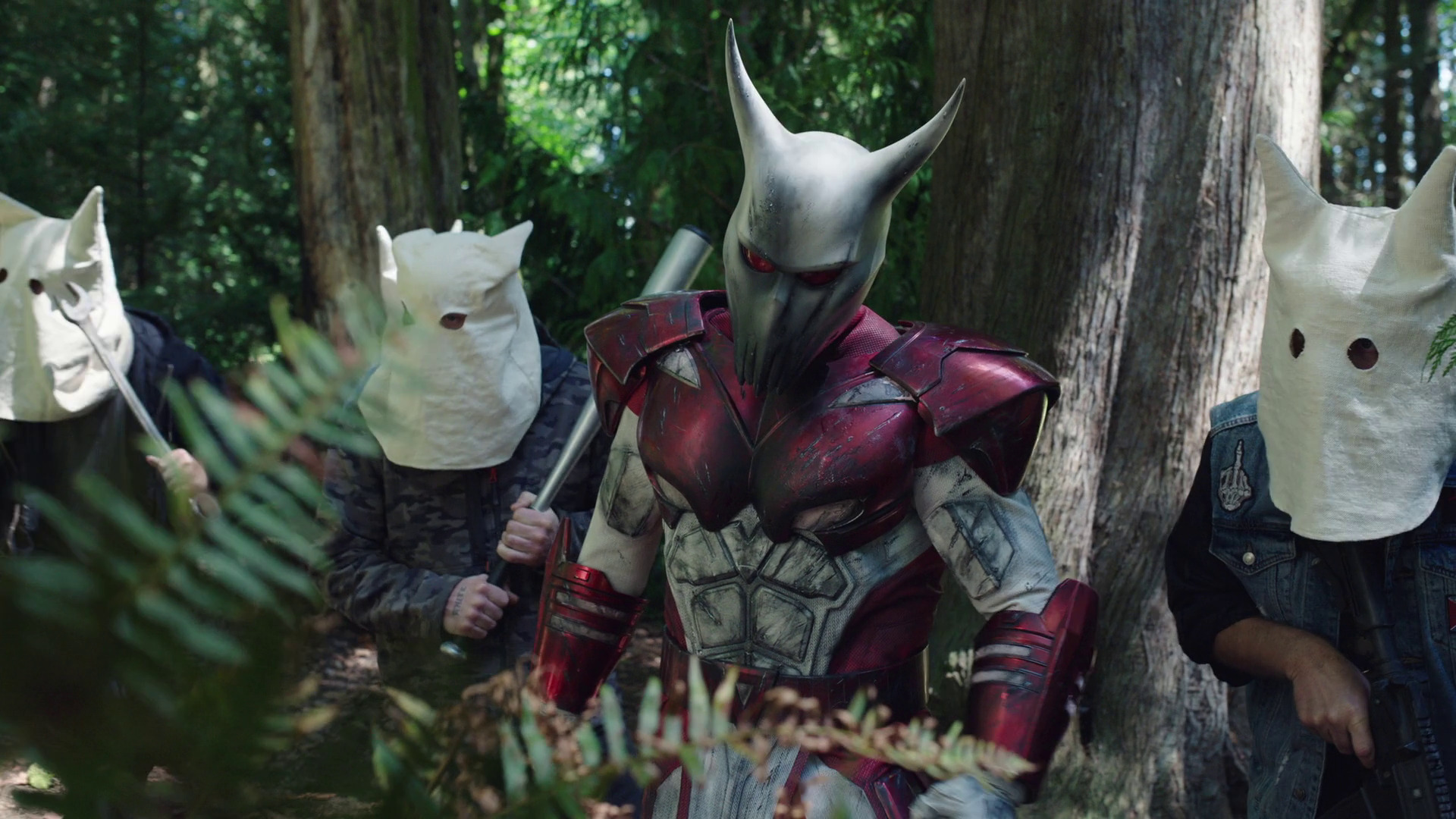 More and More of the Same

You can tell where I’m going with this, I’ll bet. You can rearrange some of the characters and many of the set pieces, recast the insect Butterflies with starfish or space leeches, and switch the Cow to Starro or a generic tentacle monster and you’ll end up with the exact same premise seen in Gunn’s past films such as The Suicide Squad or Slither.

The director seems to know only one story and tells it every time a studio throws money at him. 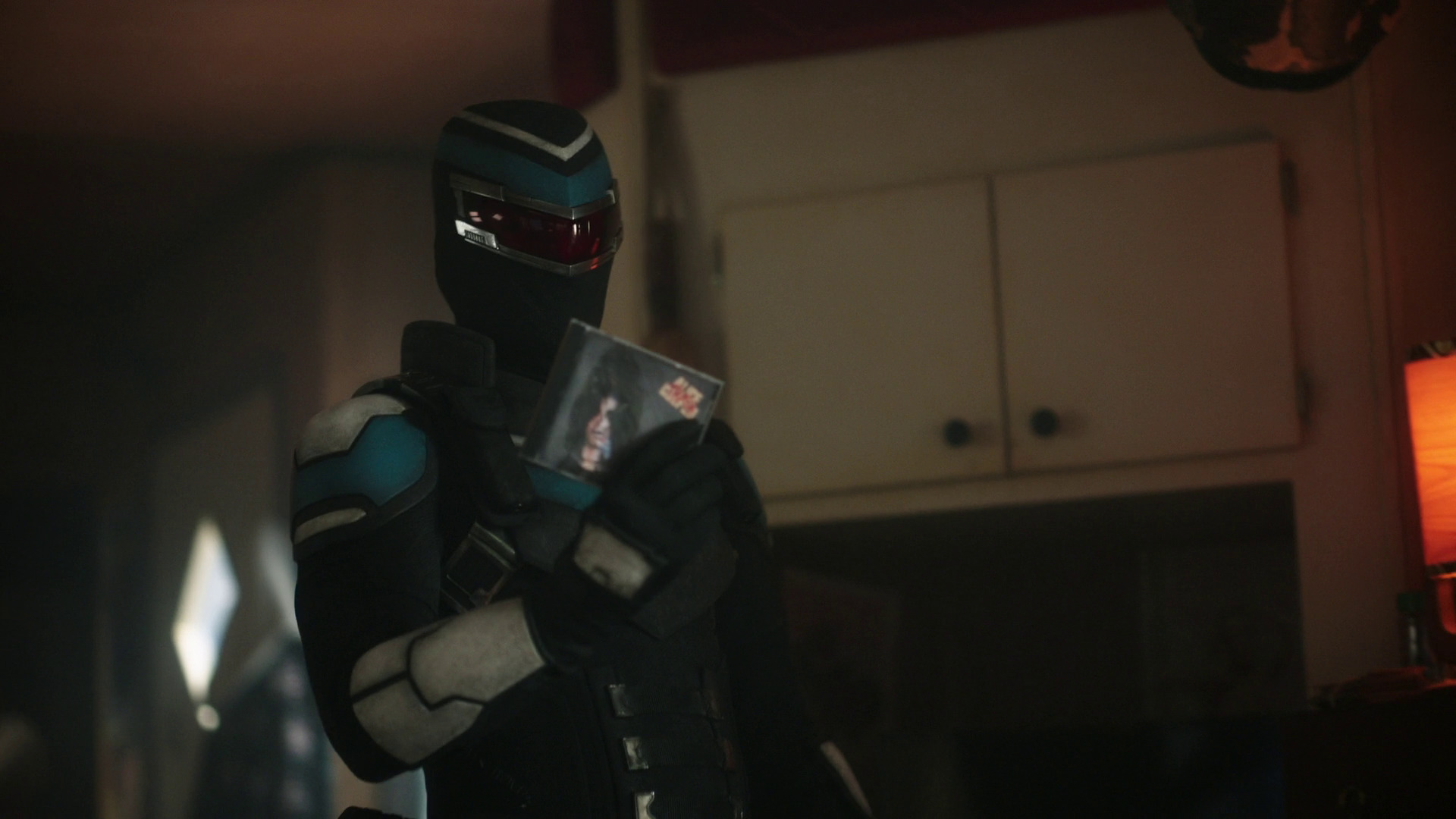 And conversely, as we previously reported, he makes established characters into blank slates by ignoring the original source material.

Hence, he can pervert, revamp, deconstruct, and otherwise turn a hero few have heard of inside-out to suit his vision.

Invariably, that vision comes with the same lewd bathroom humor we’ve all heard before and exists to serve, you know, “the message” – the broken record of “Humans bad for the Earth! Save the whales, save the snails.”

Whether it’s Thanos in the MCU, Peacemaker’s Cow, The Suicide Squad’s Starro, or even Ego in Guardians of the Galaxy Vol. 2, the long and short of a bad guy’s evil plan in Hollywood comic book adaptations tend to revolve around saving humans from ourselves and rebuilding the world or existence in the villain’s image – which isn’t too far from what Gunn does with IPs. 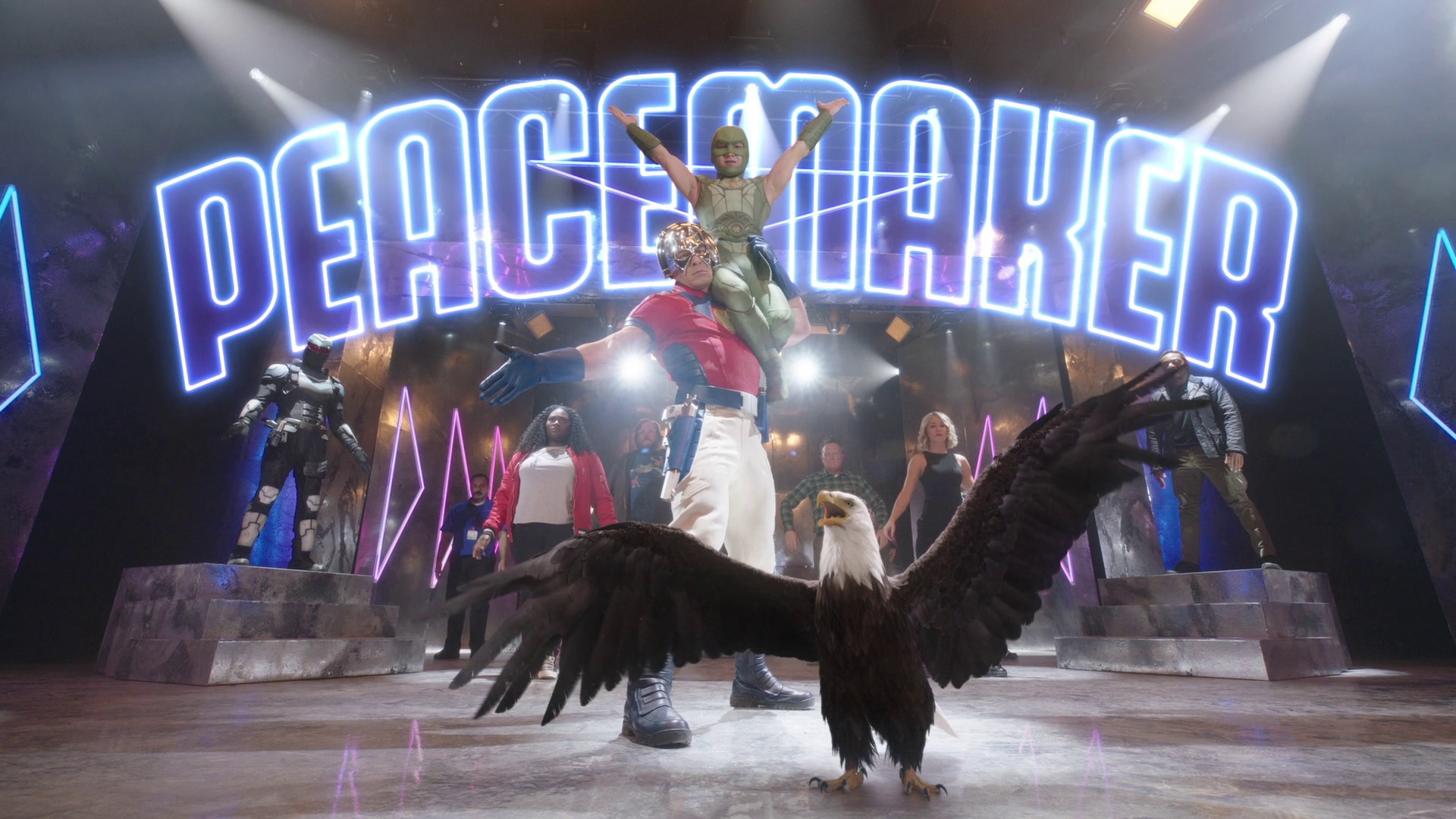 Cena does all right with what he’s given – which isn’t much in the end. His Peacemaker is just one more costumed edgy boy struggling with regret for his sins and seeking redemption, a real family, or both.

It’s a tale as old as time and has been told better by Marvel, DC, and even Gunn in other movies. 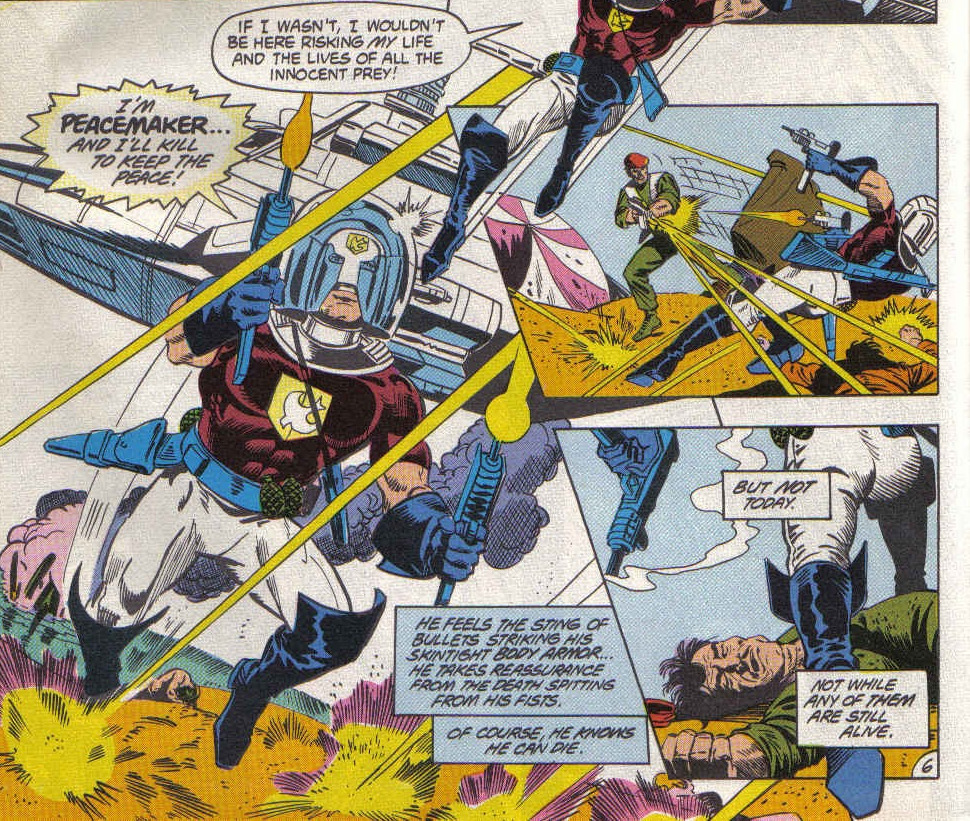 Holland plays things straight as Agent Harcourt and manages to be a bit more intriguing than anyone else around her – though this extra character development could be a byproduct of the fact that she’s Gunn’s fiance. 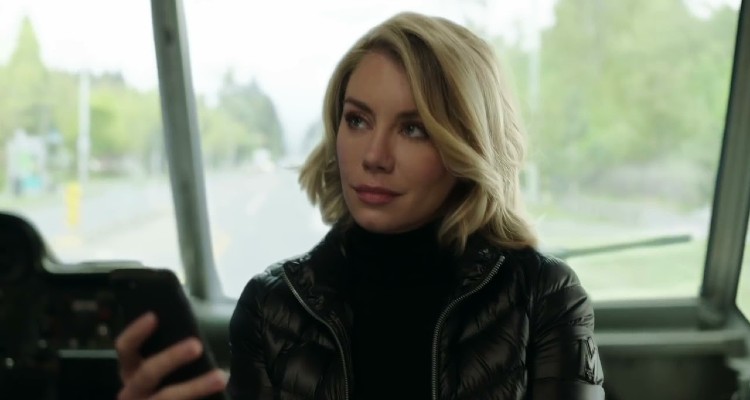 This fact has likely contributed to the rumor that Harcourt is currently set to pop up again in DC’s upcoming Black Adam.

If that goes down, she’ll be one step closer to being made into a Nick Fury-like thread connecting the DCEU continuity.

It also wouldn’t be a surprise if, in the event that she does appear in Kandahq, she soon after gets her own spinoff – or at least tags along when King Shark or Vigilante ultimately do. 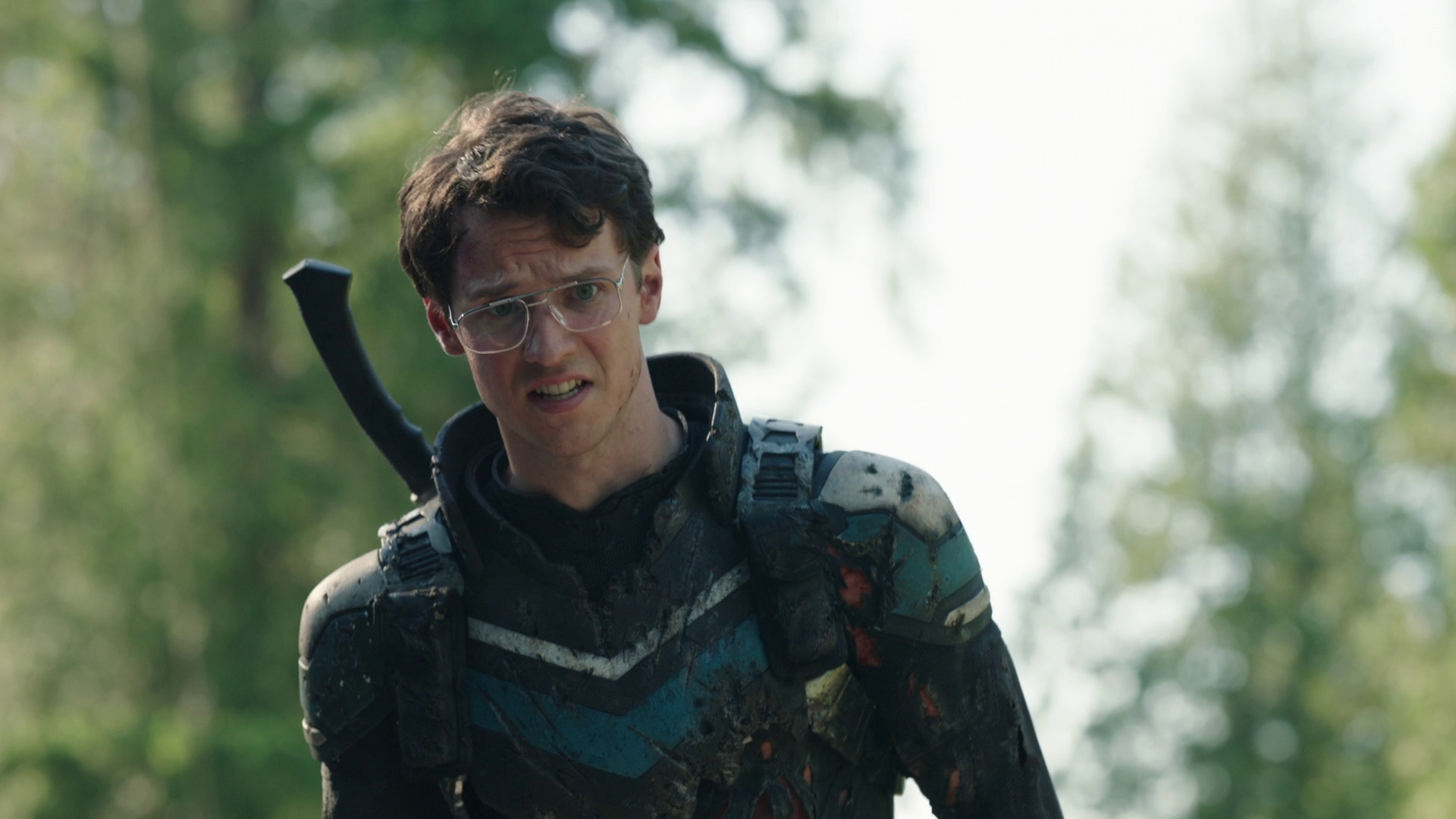 Regarding the latter, Stroma is easily the runaway act in Peacemaker though he stays a supporting character – albeit a strong one – unlike Waller’s daughter Leota (Danielle Brooks), who is sneakily made a co-main character for all the obvious reasons.

A plus-size lesbian of color and fish out of water with a wife at home, Leota doesn’t want to live in her mom’s shadow – similar to Smith and his father – and wavers between getting the job done and just going home. 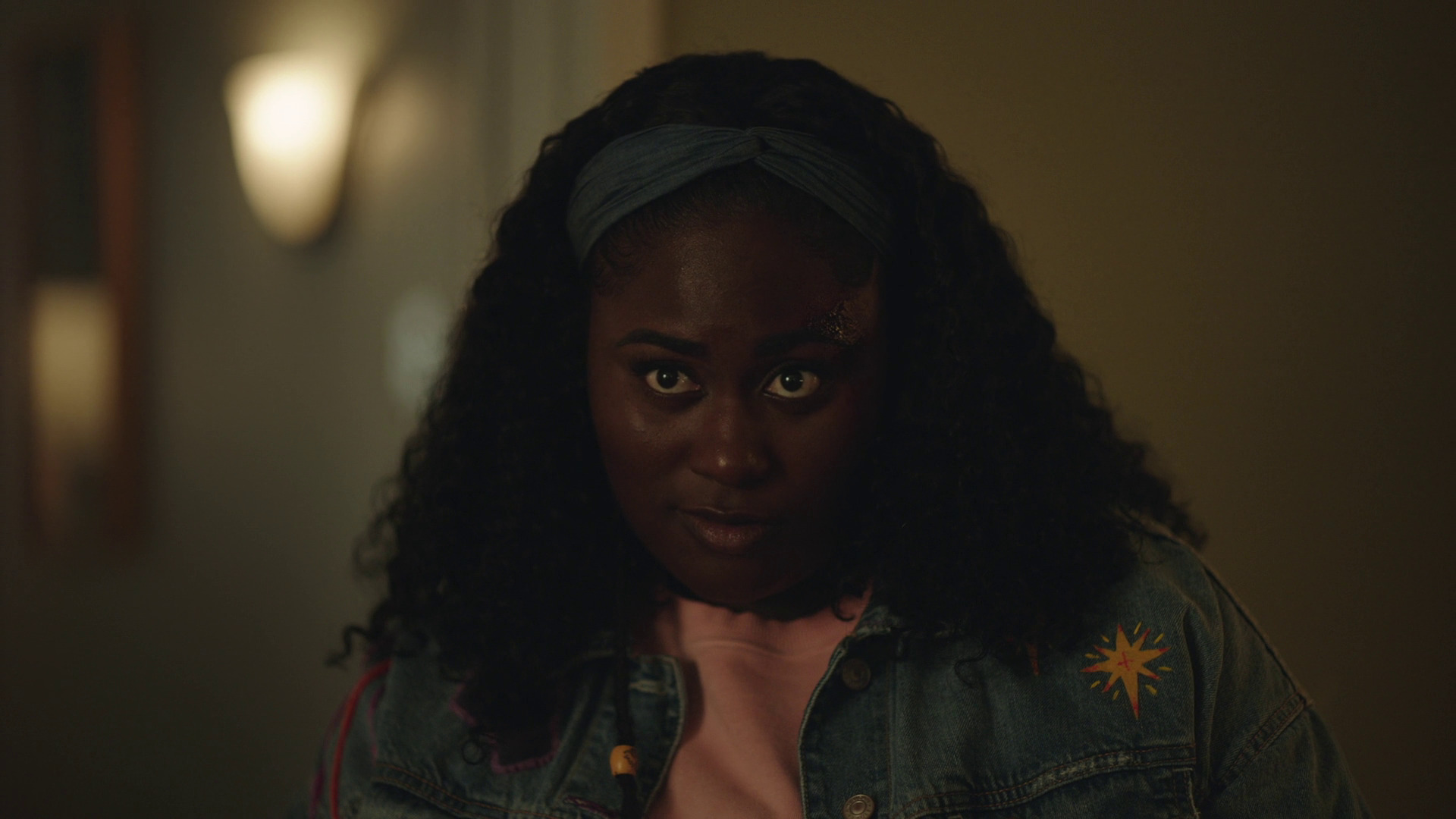 Sticking to the mission, she slowly befriends everyone, finding her rocky up-and-down associations put to the test by her mom’s bureaucratic sacrificial tactics.

Winging it when she can’t frame Peacemaker, she winds up going into the Butterfly lair to save him and dealing the death blow to the ‘Cow’. This is achieved thanks to a Peacemaker helmet she has on that turns the wearer into a missile. (Handy, huh? Just like script magic.) 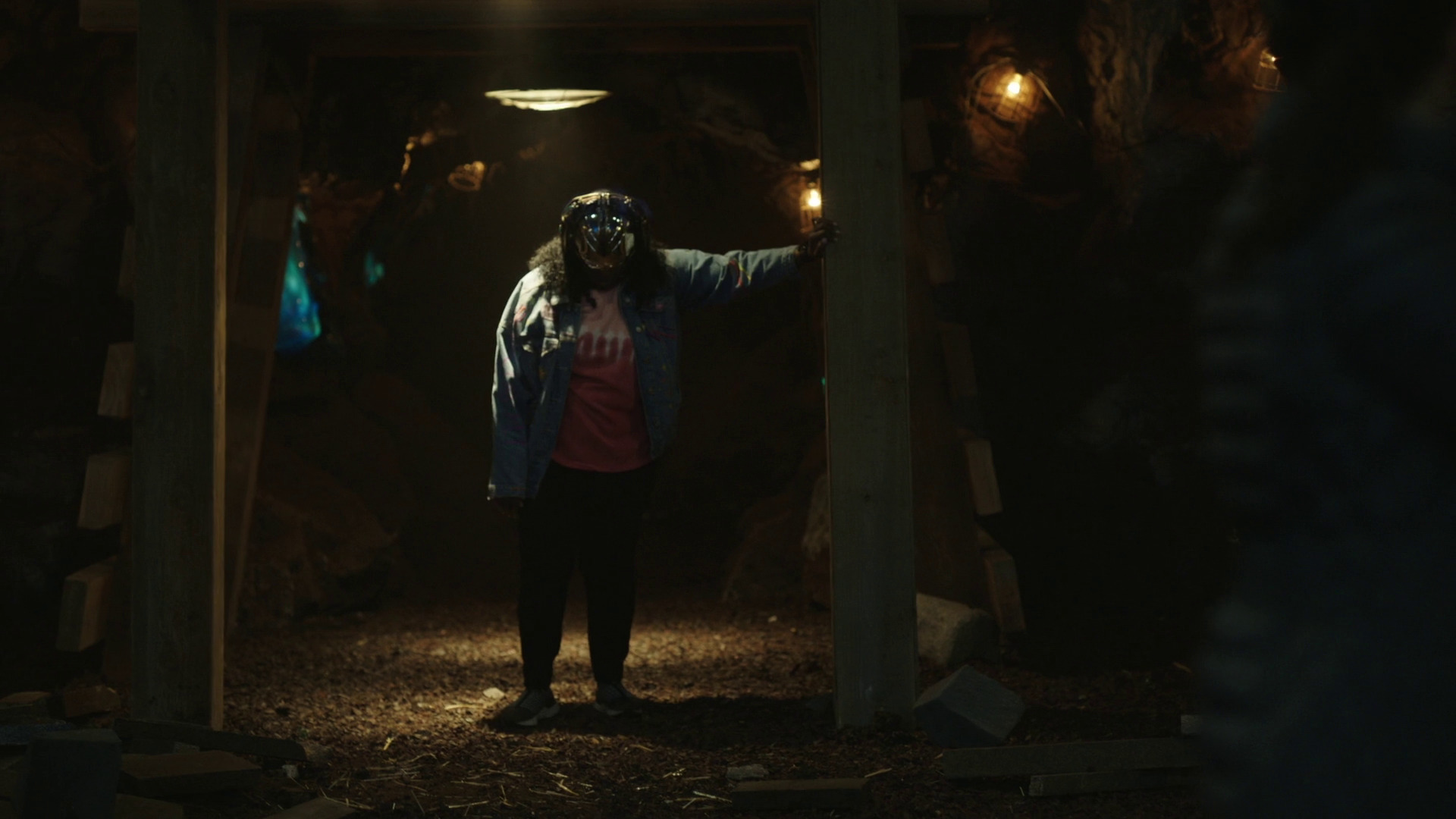 Finding Peace in Our Verdict

In the end, Peacemaker is a show that constantly shoots itself in the foot by trying too hard to be subversive and relevant.

For example, Leota’s arc is negated to a degree by the end of the first season when she’s turned into a banal fat joke and Gunn’s enviro-conscious message is undone by the ultimate thwarting of the Butterflies. 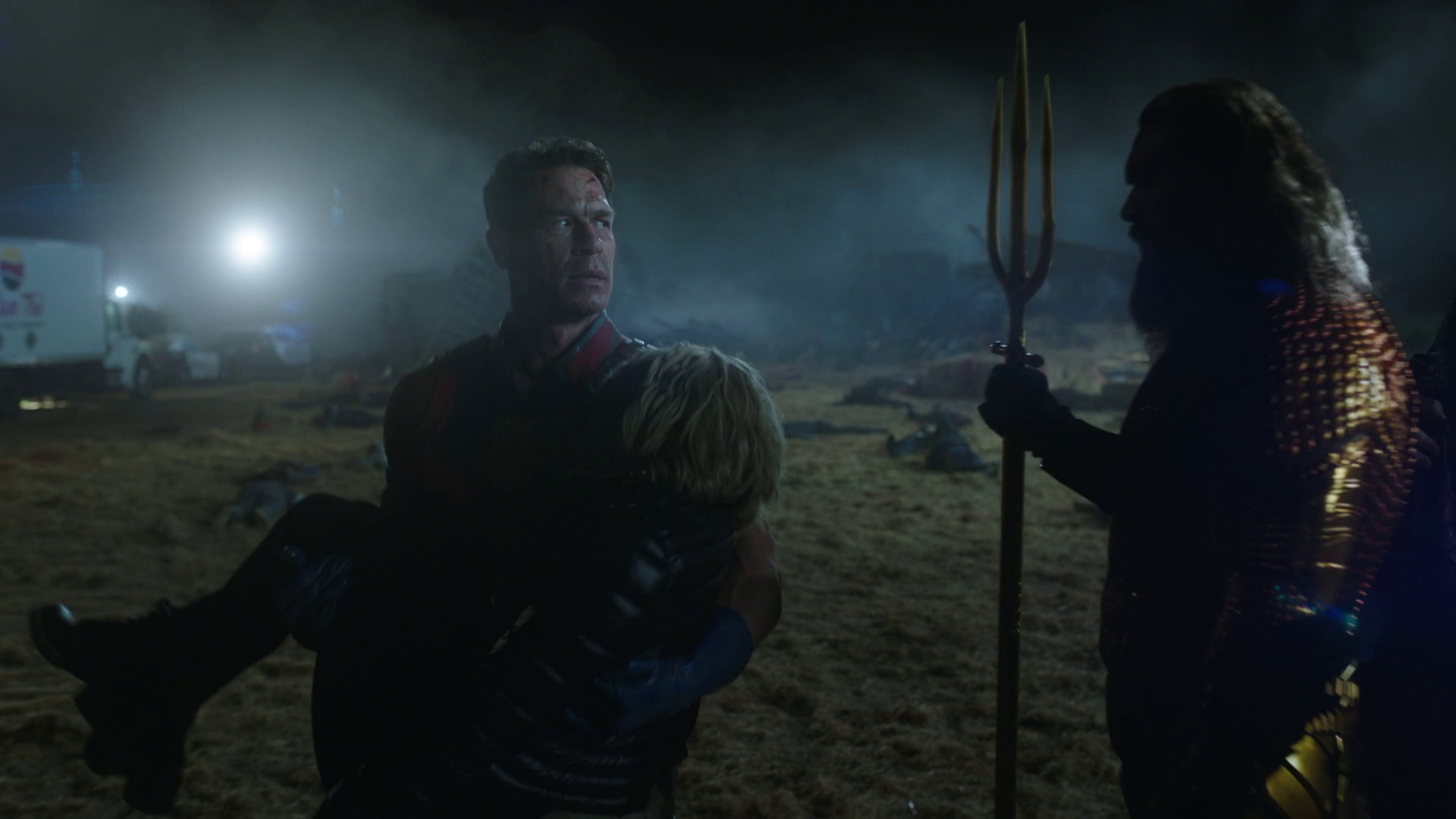 But none of that matters when all is said and done.

Ultimately, Gunn ignored sixty years of source material in order to project himself and his values onto something he didn’t create. He knows who he made Peacemaker for- and so does anyone with a discerning mind. 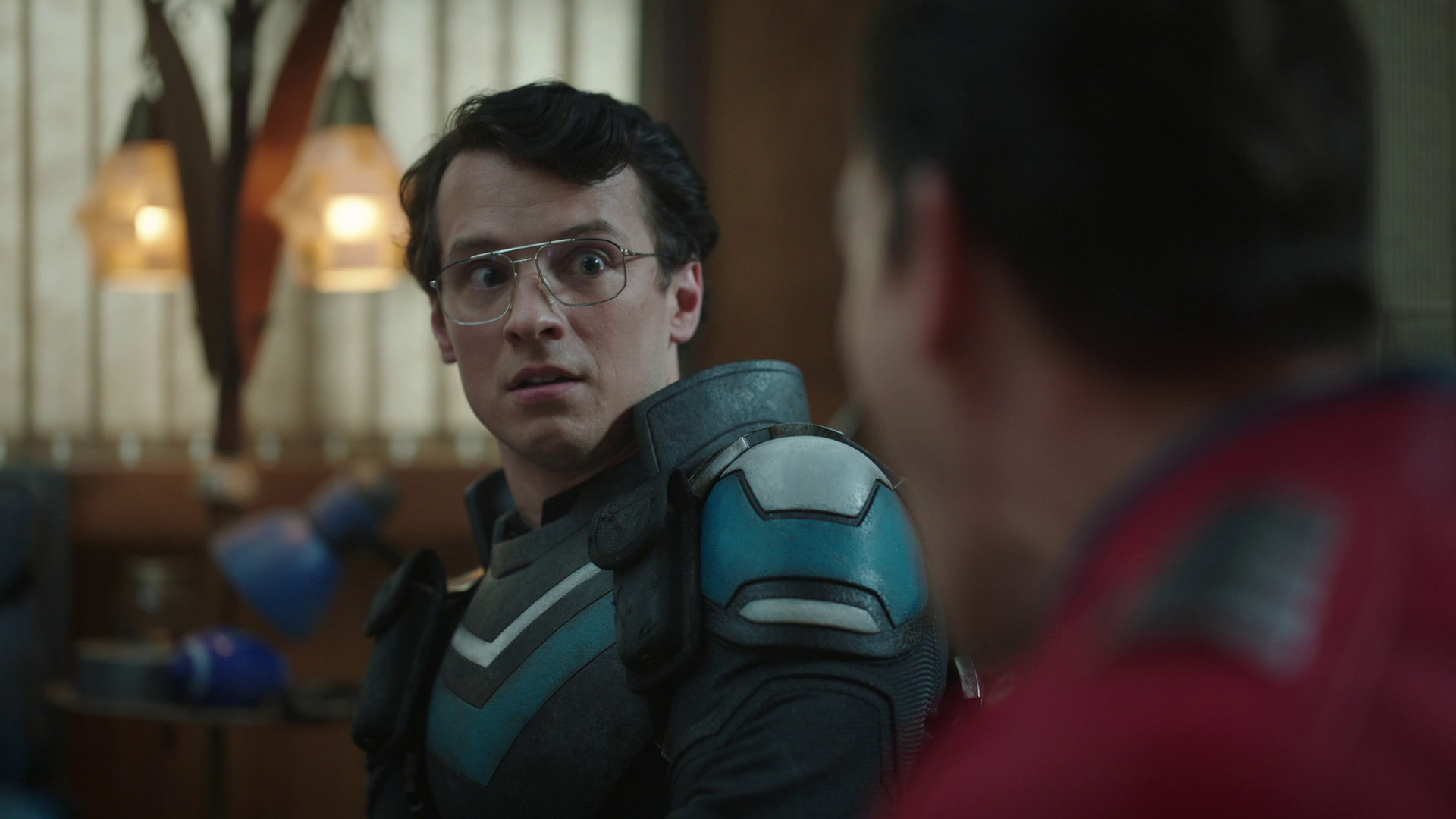 RELATED: The Suicide Squad Review: Was It Really Worth Dying To Save The World?