Star Trek actor George Takei took to Twitter to call on Americans to accept higher gas and food prices in order to put the screws to Russian President Vladimir Putin. 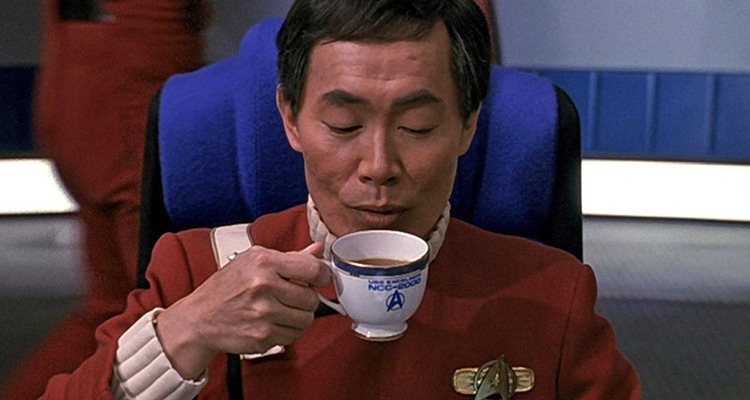 Takei wrote, “Americans: We can endure higher prices for food and gas if it means putting the screws to Putin.”

He then explained it would be patriotic to do so, “Consider it a patriotic donation in the fight for freedom over tyranny.” 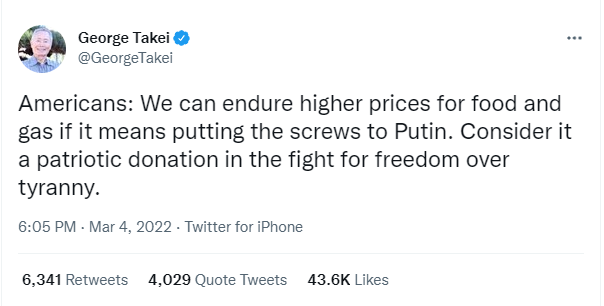 Back in February, Takei used Russia’s invasion of Ukraine as a political wedge in the United States writing, “The situation in Ukraine is deadly serious, and America requires serious leadership.”

“The MAGA GOP politicians are not serious people. They are trolls, attention seekers, and Putin apologists. We cannot allow them to control the levers of power and the military ever again,” he added. 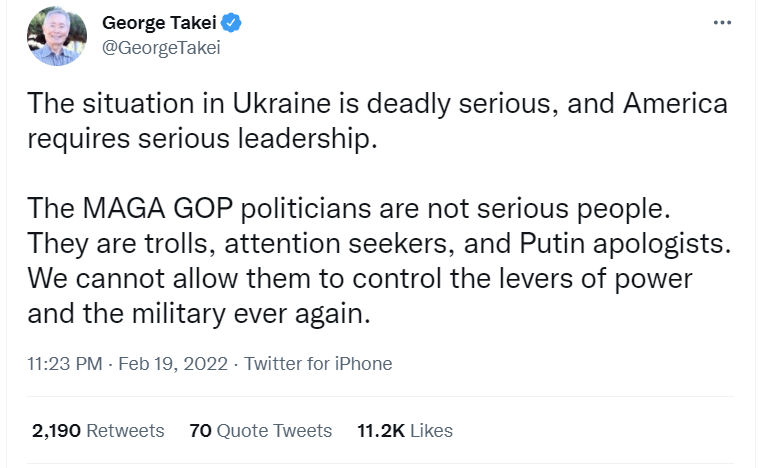 He would do this again towards the end of February writing, “We need to hang Putin ’round the neck of every pathetic, fawning GOP coward who has ever praised him or even failed to condemn him. No mercy.” 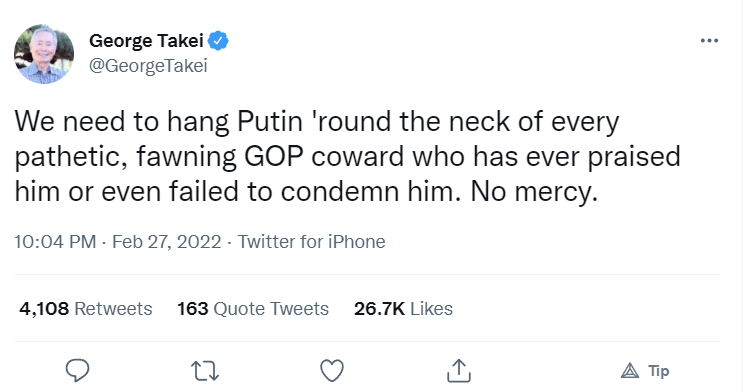 RELATED: Star Trek Star William Shatner Responds To George Takei’s Insulting Of Shatner’s Spaceflight: “The Only Time He Gets Press Is When He Talks Bad About Me”

Takei would also condemn the invasion and claim violence and war are never the answer.

He wrote, “Horrified at the brazen, illegal and bloody ambitions of the despot in Moscow. Praying for the many brave souls in Ukraine.”

“Violence and war is never the answer. History will condemn the name Vladimir Putin,” he stated. 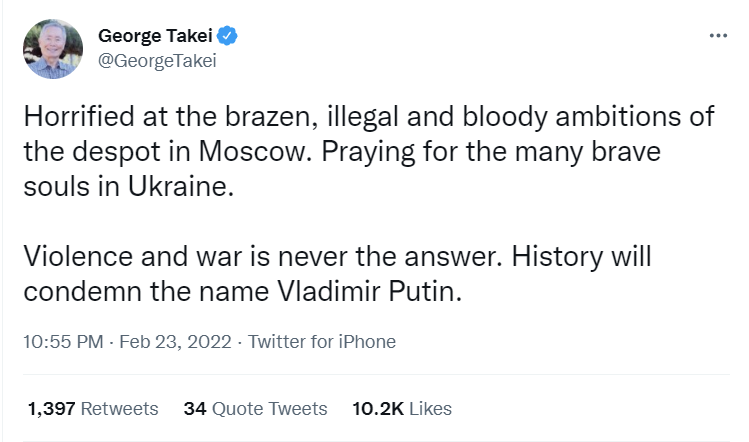 A little over a week later he appeared to again call for de-escalation.

He tweeted, “Putin’s war in Ukraine is devastating, a needless loss of lives and homes for countless families. We simply cannot allow further escalation. The world saw the horrific consequences of nuclear weapons for the people of Hiroshima and Nagasaki. #NeverAgain“

However, accompanying this statement he shared an image from the Union of Concerned Scientists that reads, “This must not escalate. Right now we need commitments from world leaders to ensure this war does not escalate. Long-term, our leaders must commit to a non-nuclear solution to create a safer future for all of us.” 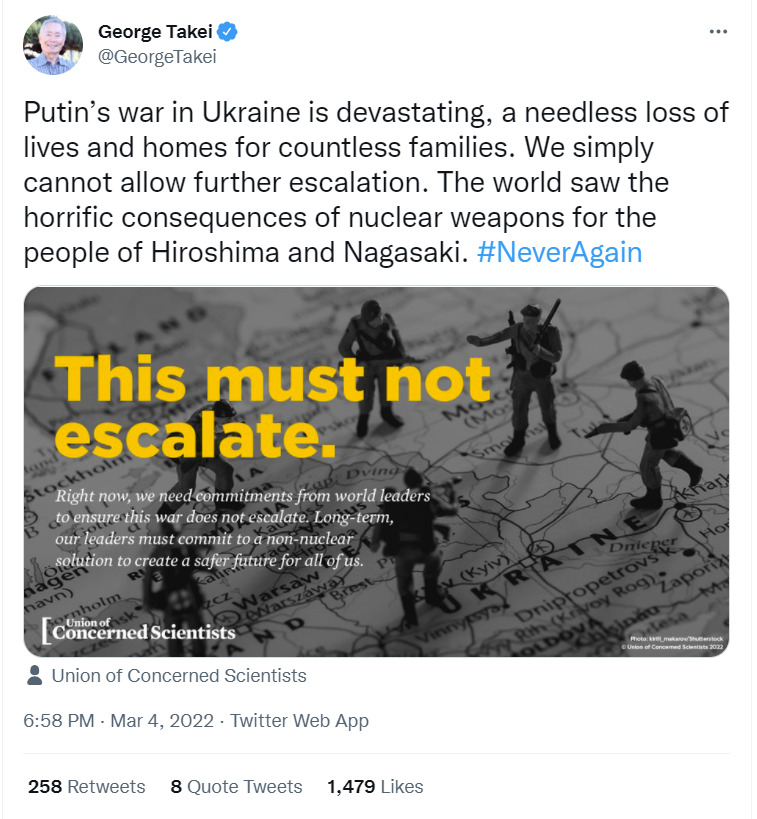 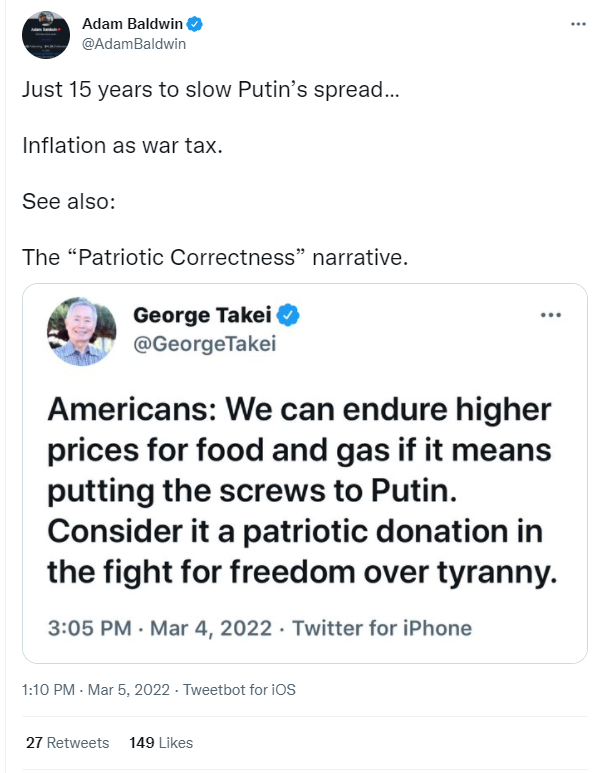 YouTuber La Reina Creole responded, “Nobody asked you to speak for me. Now if you want to pay my bills too we can talk.”

Lawyer and YouTuber Viva Frei aka David Freiheit quoted Takei and then shared a screenshot showing his net worth is $14 million. 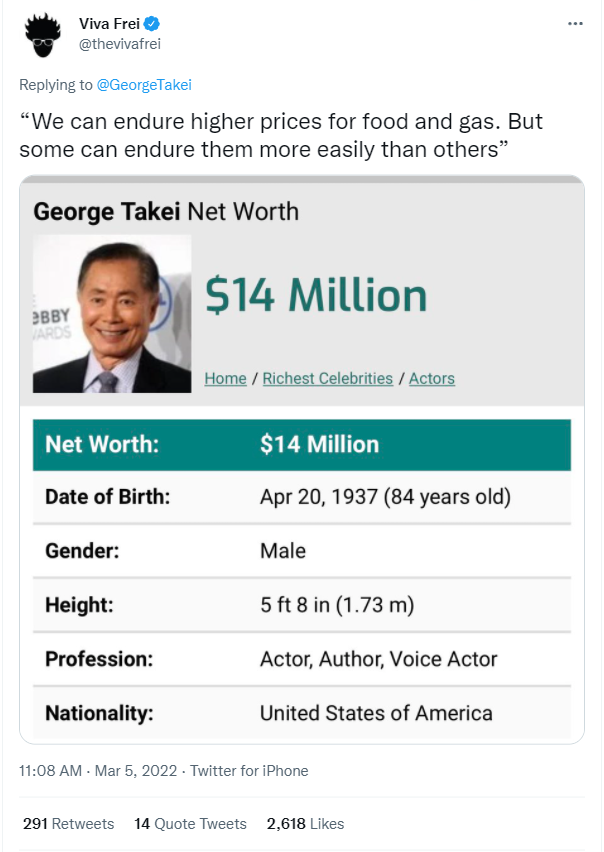 YouTuber Weaponized Nerd Rage wrote, “Cool. You won’t mind paying for it then instead of asking us to, then.”

“I. CAN NOT! I’m not the only person who literally can’t afford any more cost increases,” tweeted YouTuber MechaRandom42. “These war mongers need to be stopped!” 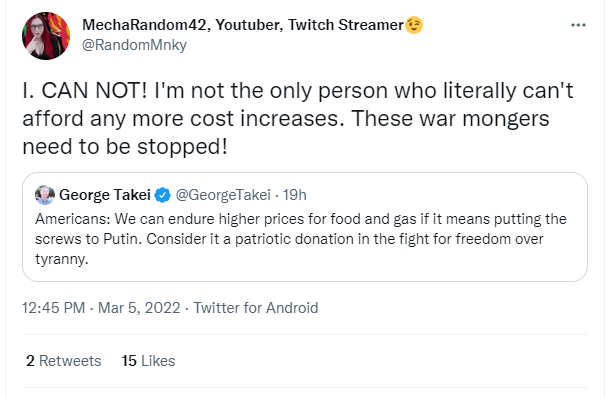 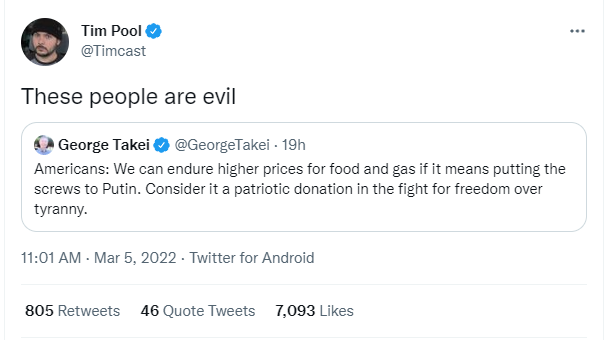 What do you make of Takei’s statement? Would you see it as a patriotic duty? Are you willing to pay more for food and gas to put the screws to Putin?