The first trailer for Ms. Marvel’s upcoming Disney Plus series has officially confirmed that Marvel’s favorite diverse legacy character, Kamala Khan, will receive a massive retcon to her power set when she makes her official leap to  the Marvel Cinematic Universe.

Released on March 15th, the first full trailer for Ms. Marvel not only provides audiences with their first proper look at the fledgling super heroine, but also reveals that the Avengers fan girl’s on-screen ‘embiggening powers’ will bear little resemblance to their depiction in the comics.

According to Kamala Khan’s comic book origin story, the young Inhuman gains her powers after the species’ king, Black Bolt, sets off the Terrigen Mist Bomb in the wake of Thanos’ invasion of their capital city of Attilan in a last-ditch effort to stop the Mad Titan. 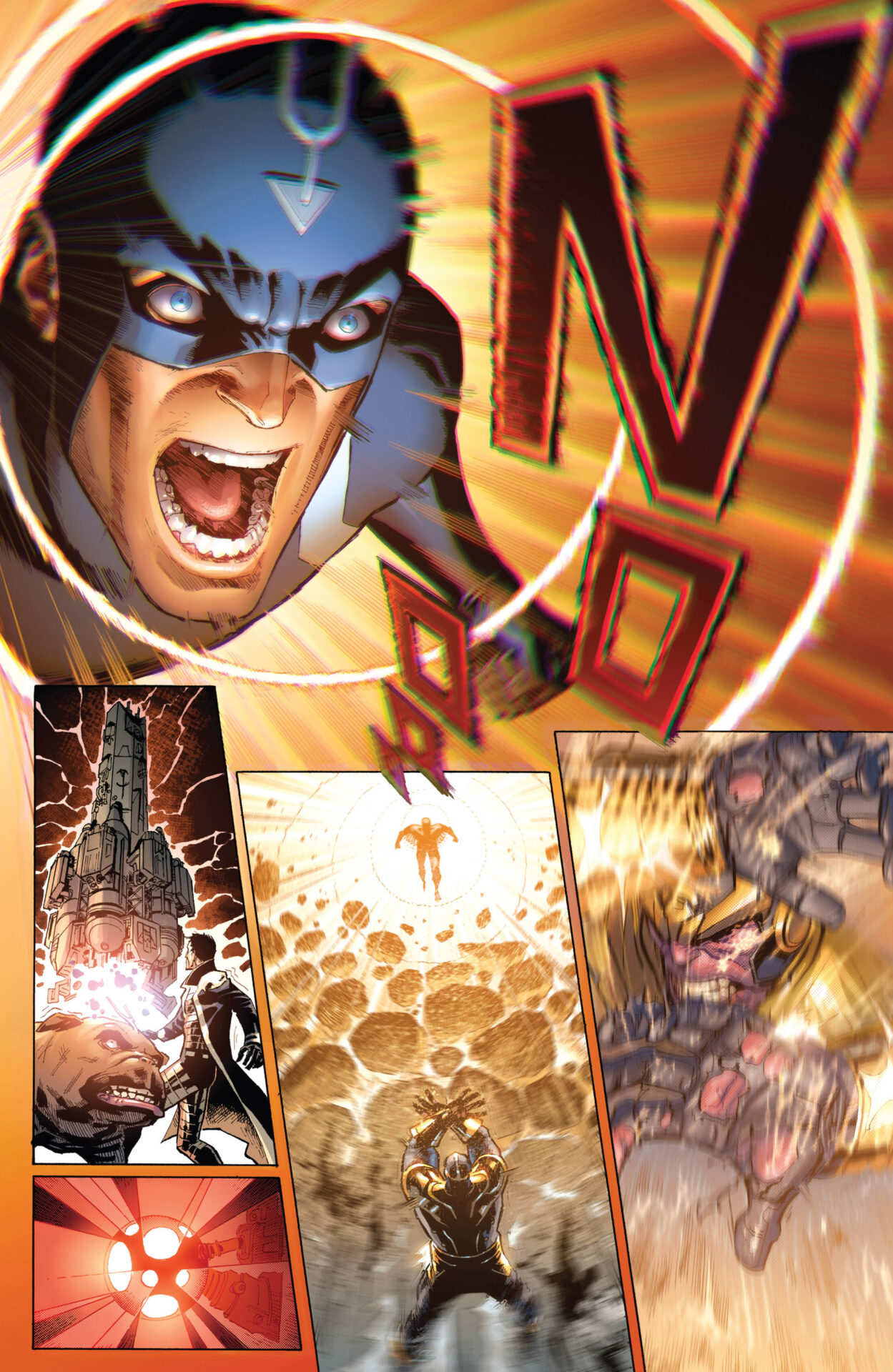 As a result of Khan’s subsequent exposure to the Terrigen Mists, she soon after awakens to her new Inhuman abilities, which grant her rubber-esque physical properties that allow her to morph and manipulate her body at will ala the Fantastic Four’s Mr. Fantastic or One Piece’s Luffy – as they are in the comics. 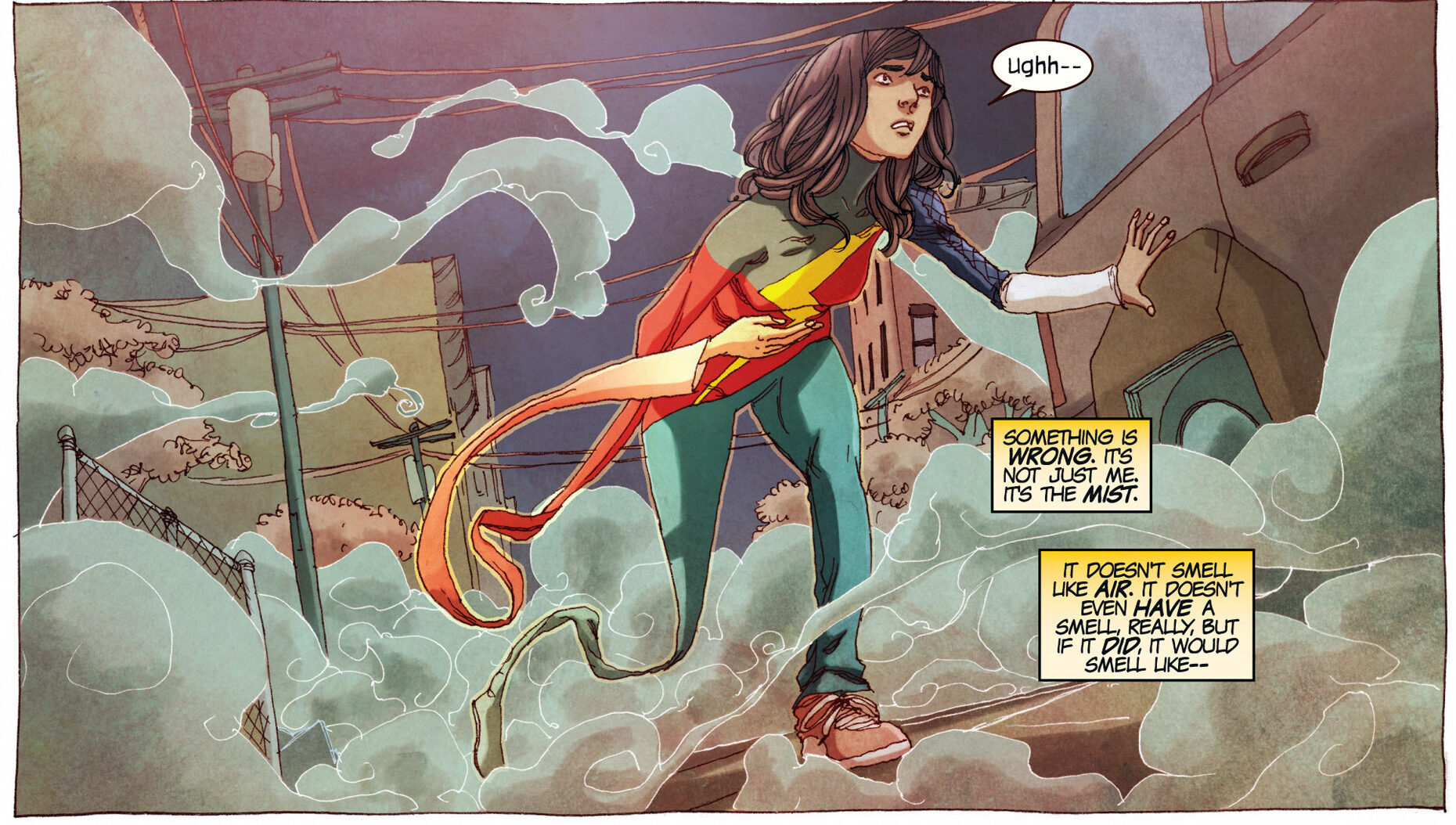 However, as seen in the trailer, not only does Khan now appears to receive her powers from a mystical bracelet, seemingly completely sidestepping her previously widely celebrated connection to the Inhumans in what can only be assumed to be a desire by the company to avoid acknowledging their failed attempt to push the Stan Lee and Jack Kirby creations as an alternative to the X-Men. 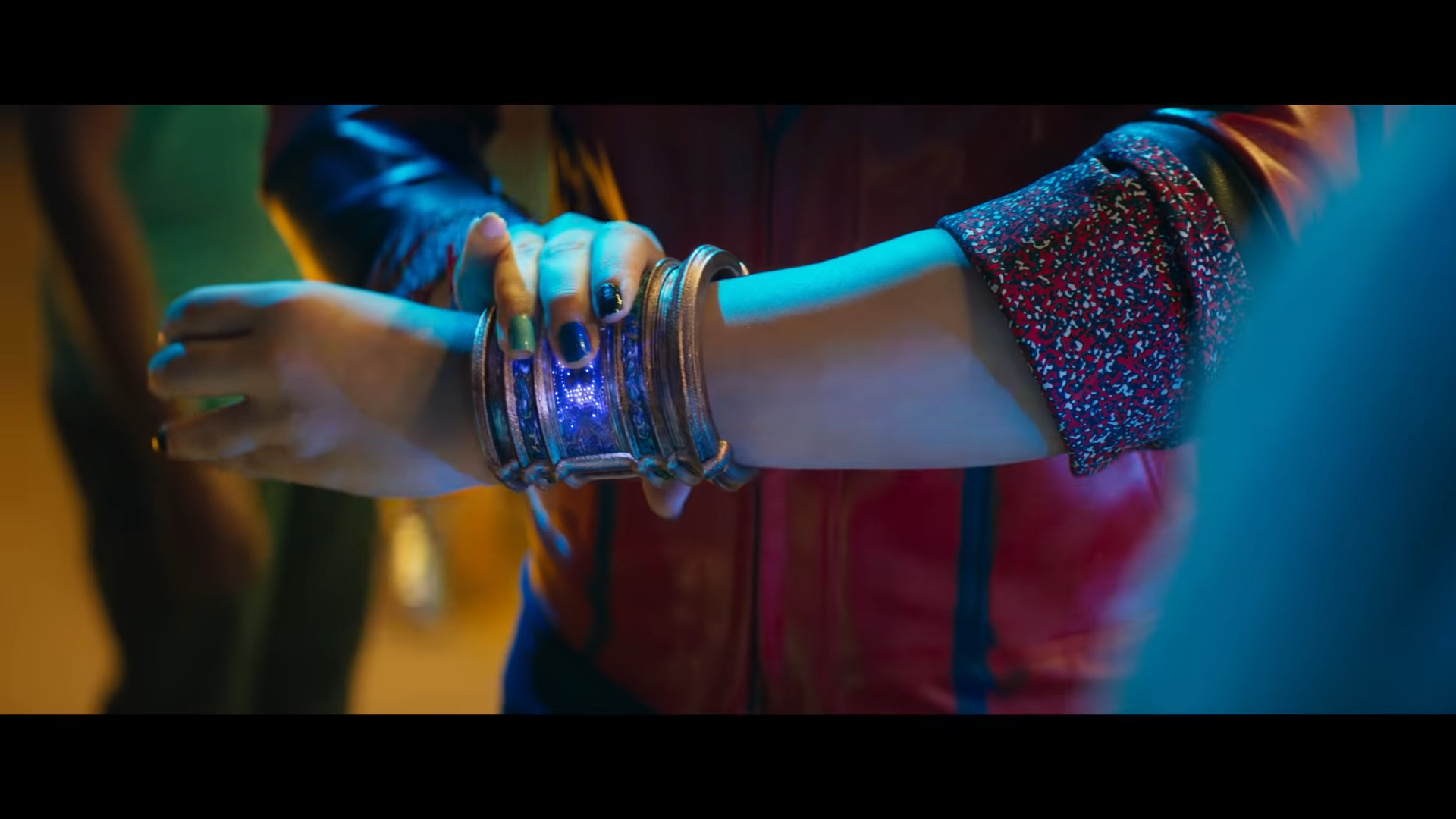 Further, rather than altering her physical form, she now wields the ability to conjure up Green Lantern-style hard-light constructs, including giant fists: 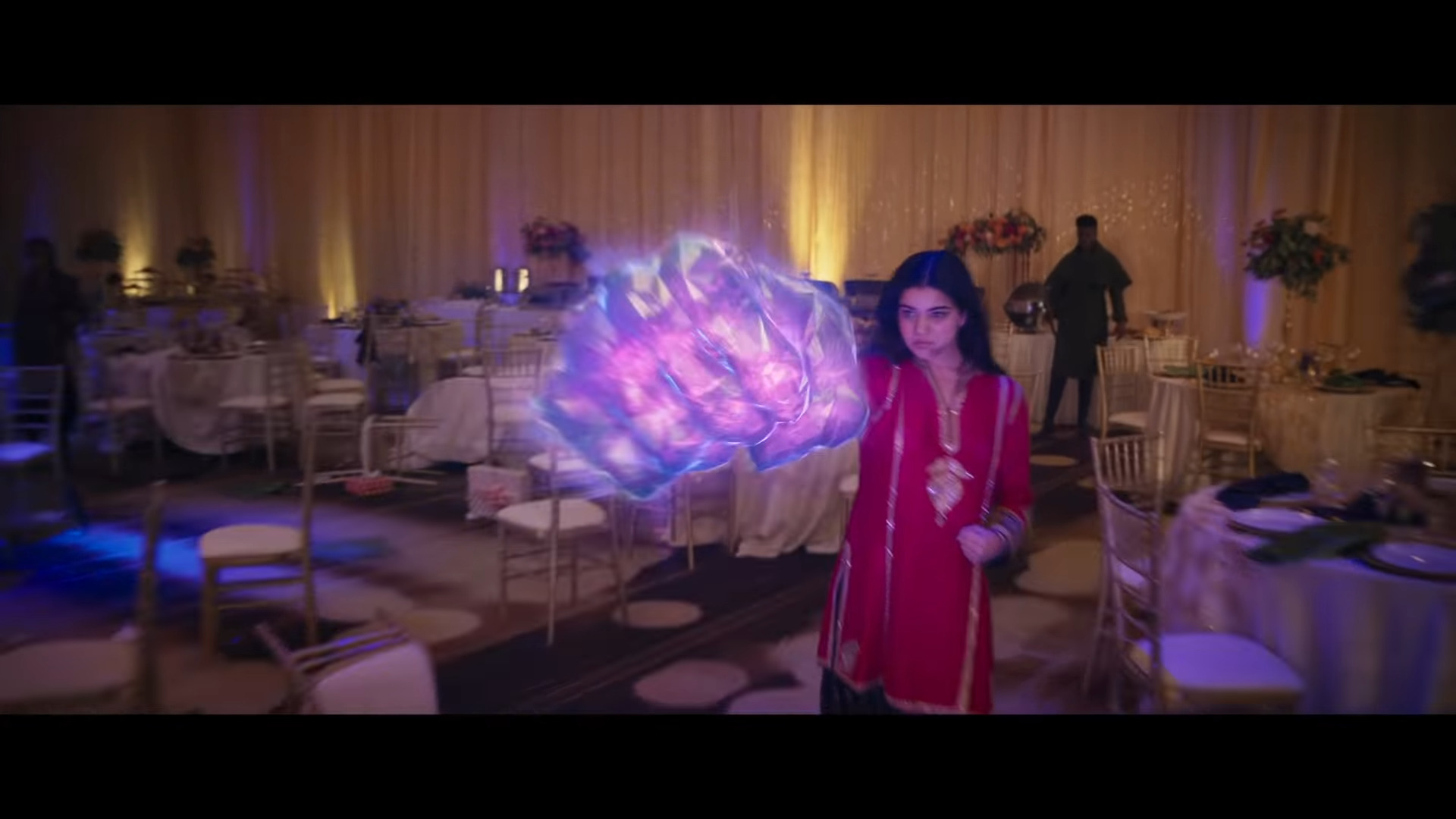 Physical platforms to walk upon: 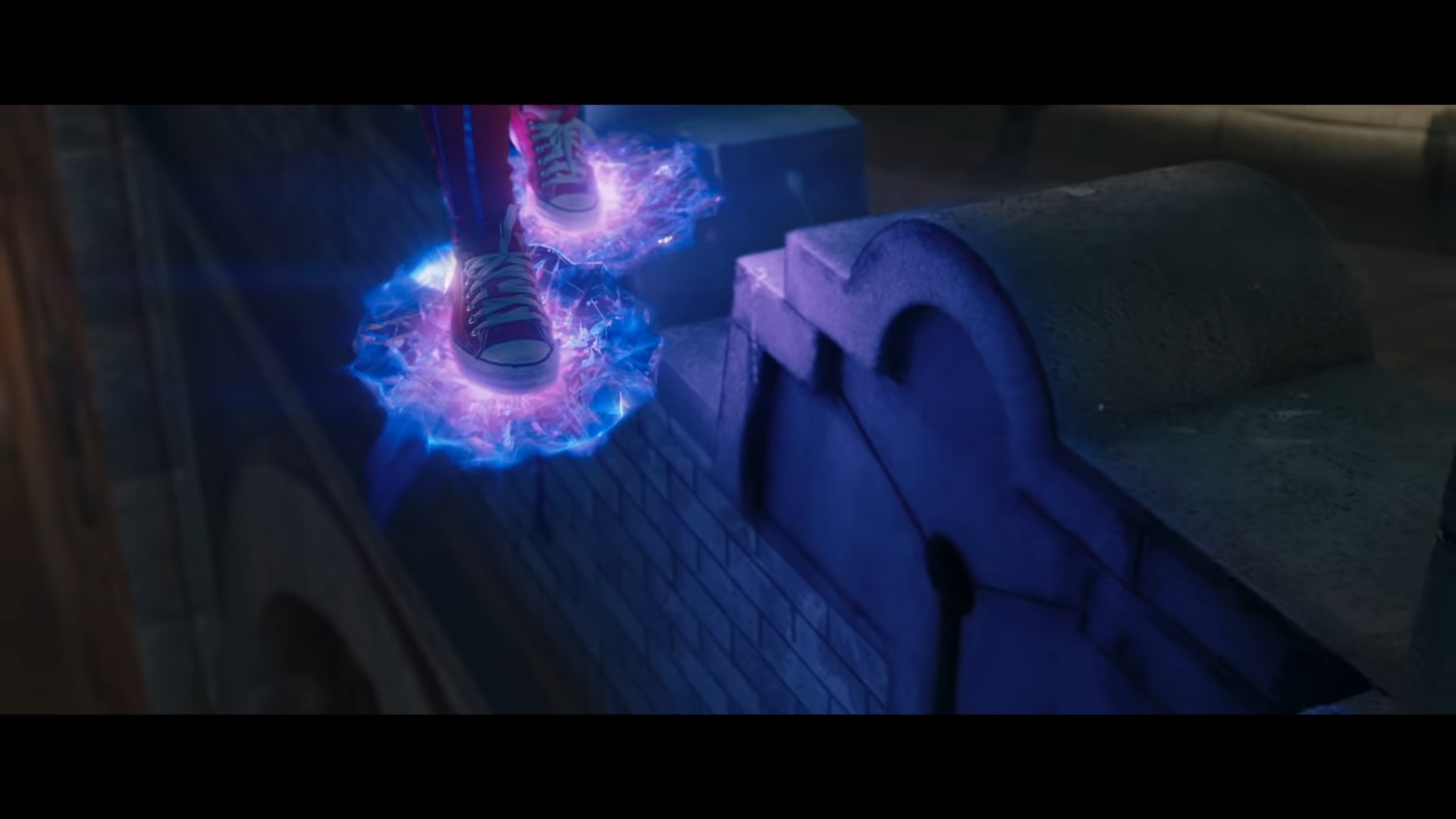 And even a protective wall: 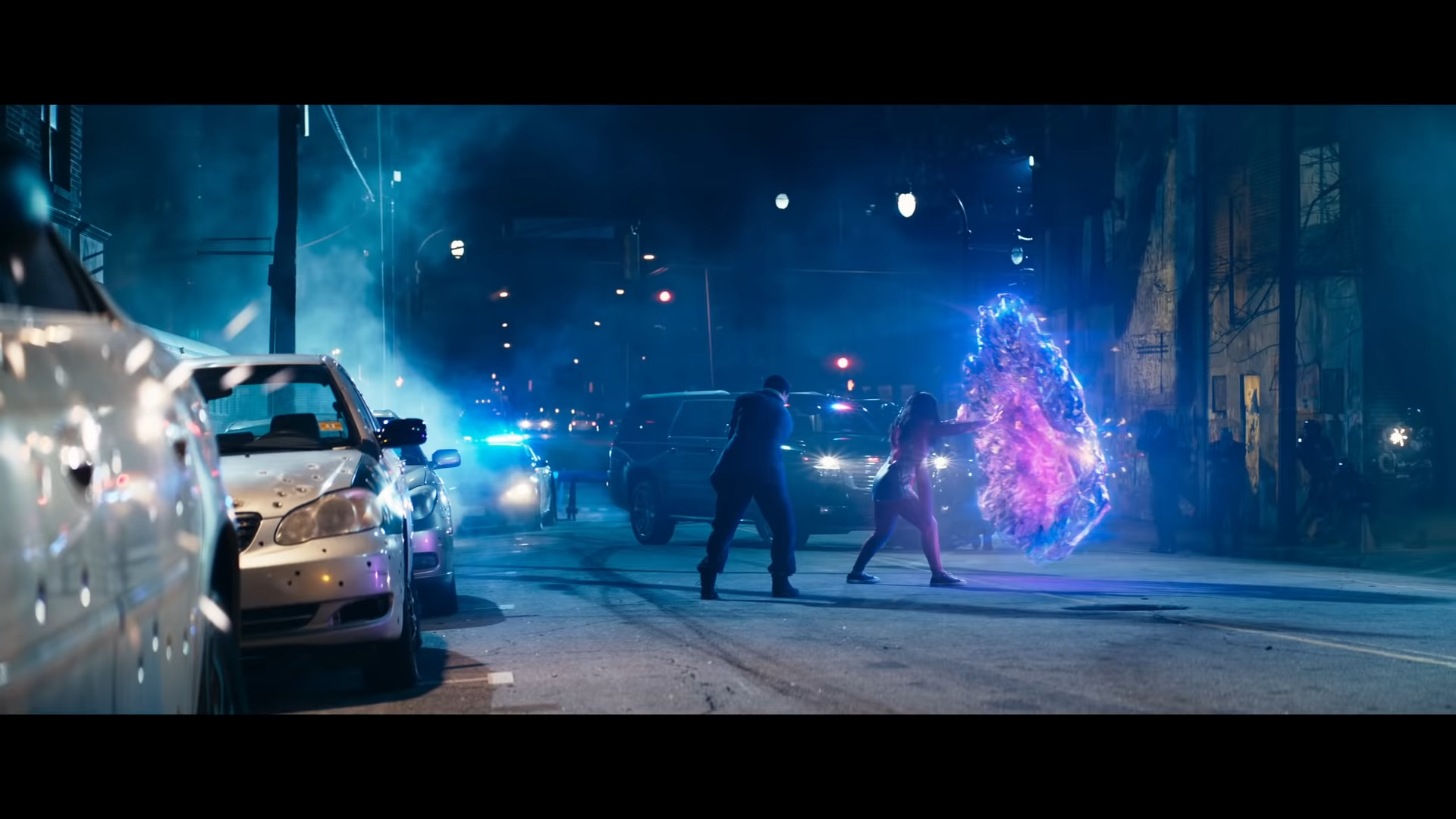 This change was first publicly suggested by Pyramid International’s release of official Marvel promotional art wherein Khan could be seen wielding crystal-like constructs in place of any sort of morphing powers. 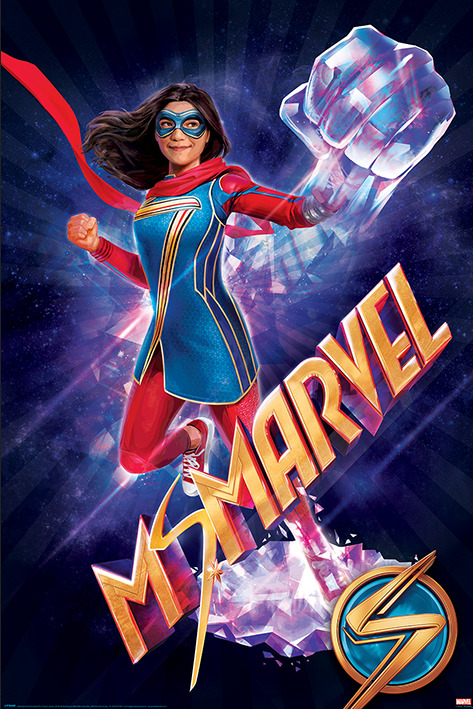 While it’s likely that this decision was partially influenced by a desire to avoid retreading the awkward-looking CGI roads of ‘stretchy human’ superpowers previously attempted by Ioan Gruffud in Fox’s pair of Fantastic Four films and Harley Sawyer in The CW’s The Flash, it’s also equally likely that this change was done to make her character more palatable to the general public.

After all, despite Marvel’s continual push of the character to the forefront across various mediums, media featuring Ms. Marvel continually struggles to find consistent or significant fan bases. 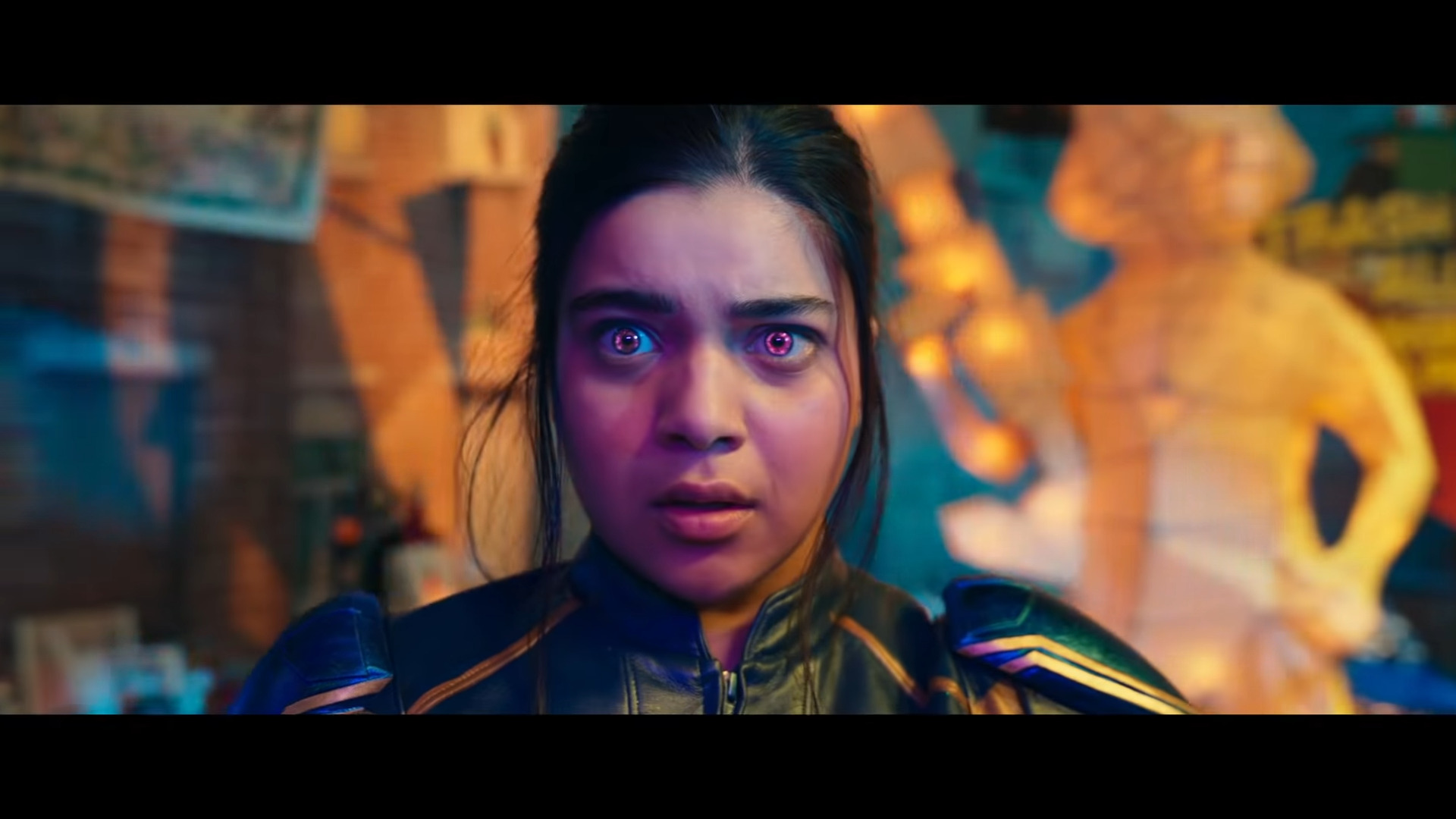 In the comics – outside of her second eponymous series, which ran for 38 issues thanks in parts to the character’s then novel-status, momentum being carried over from the above-average quality of her original run, and its participation in the Civil War II event – series featuring Khan in the leading role have faced regular cycles of cancellations and reboots.

Despite featuring Spider-Man and Captain Marvel herself as its first two guest-stars, a 2019 attempt to revive the classic Marvel Team-Up series with Khan in the lead lasted only six issues. 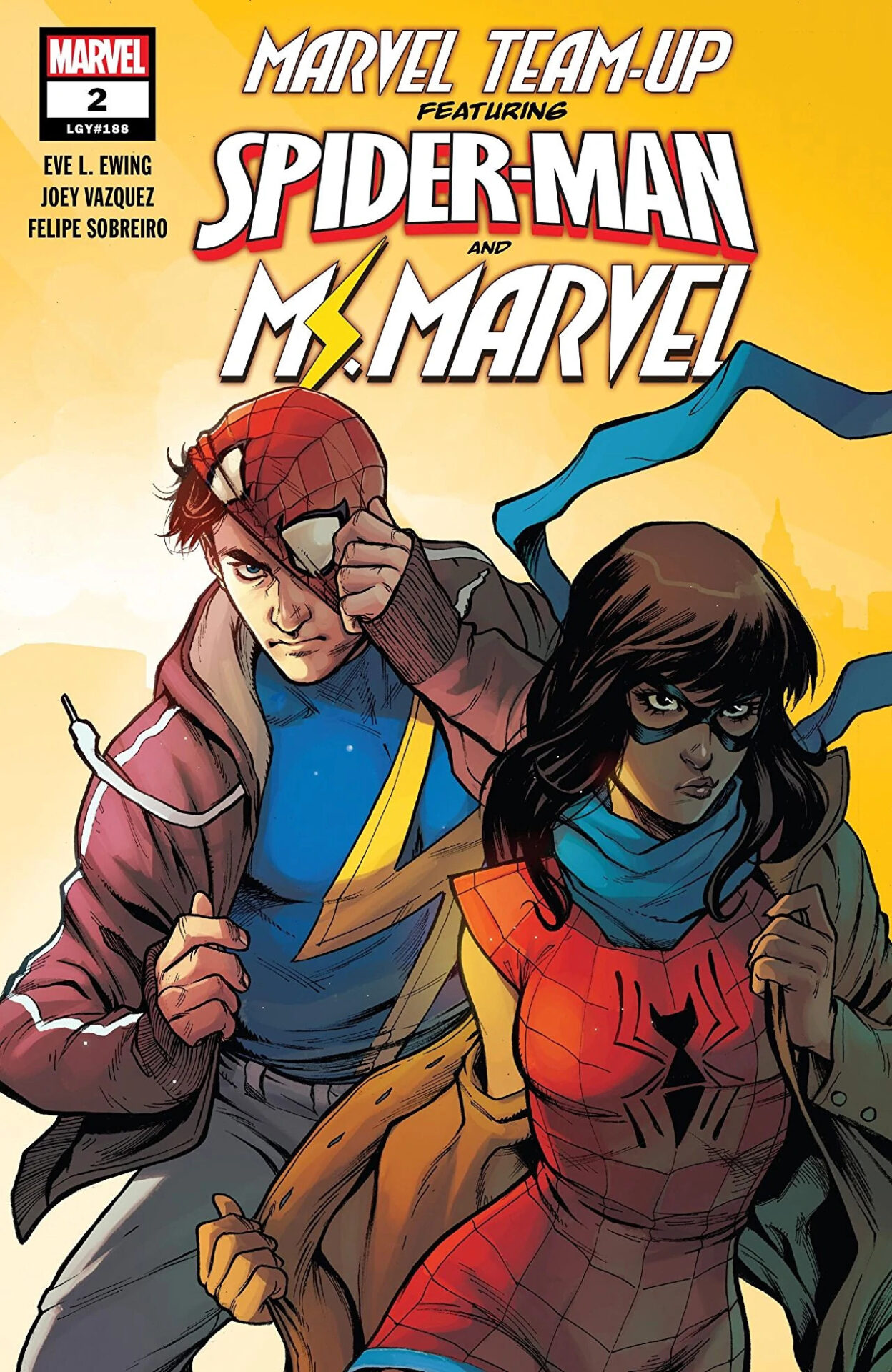 Continuing on from the cancellation of Ms. Marvel Vol. 4 later that same year, Saladin Ahemd’s Magnificent Ms. Marvel ran for only a year-and-a-half between 2019 and 2021, topping out at a total of 18 issues.

Though Khan returned to headline her Ms. Marvel: Beyond the Limit miniseries, Marvel currently holds no plans to have her lead another solo series. 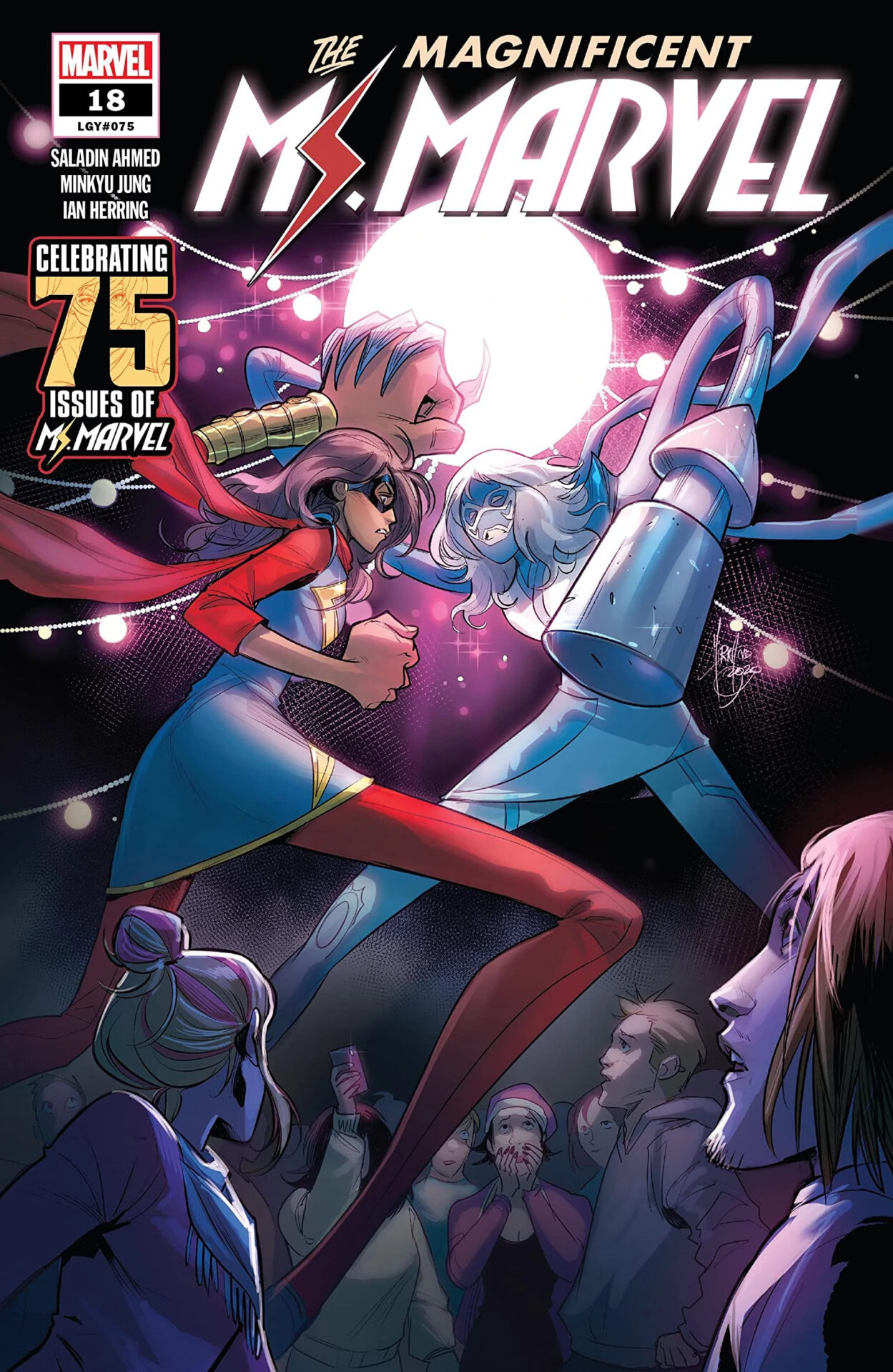 Additionally, the last three volumes of Champions – which follow a new incarnation of the titular  team composed of teenaged legacy heroes led by Khan – have all been struck down relatively quickly.

Though the first volume to feature Khan’s team ran for 28 total issues, ostensibly supported by both the publisher’s push of the title and the novelty of the new team, the Champions’ subsequent two volumes both ended after just ten issues. 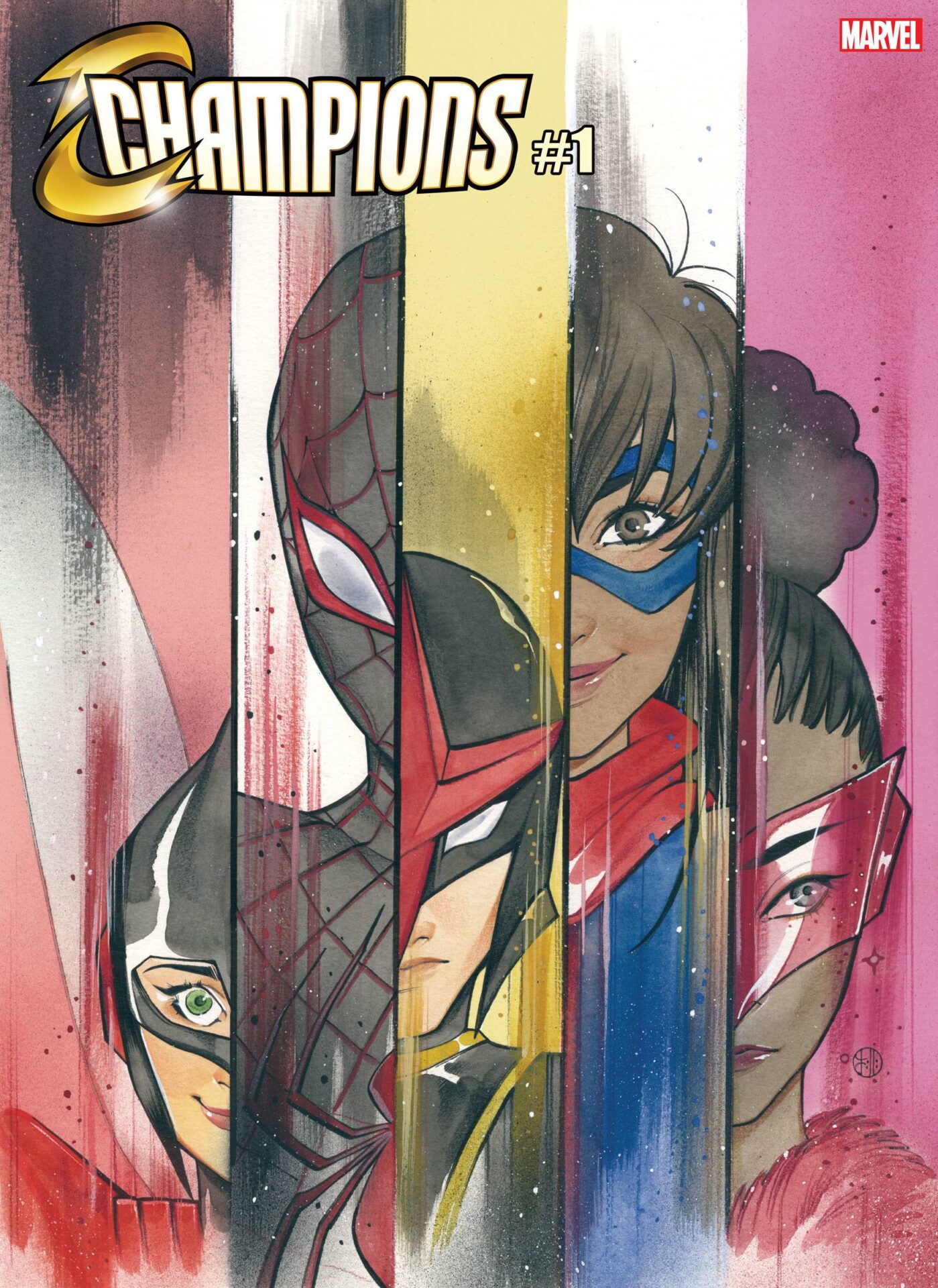 Khan was also the face of the abysmal Crystal Dynamics-developed Marvel’s Avengers, which not only bait-and-switched players with the idea of playing as Earth’s Mightiest Heroes only to instead put them primarily in the shoes of the Carol Danvers super stan, but also performed so poorly regarding sales and regular player numbers that the Games as a Service title has since been written off by publisher Square Enix as having “produced a disappointing outcome”. 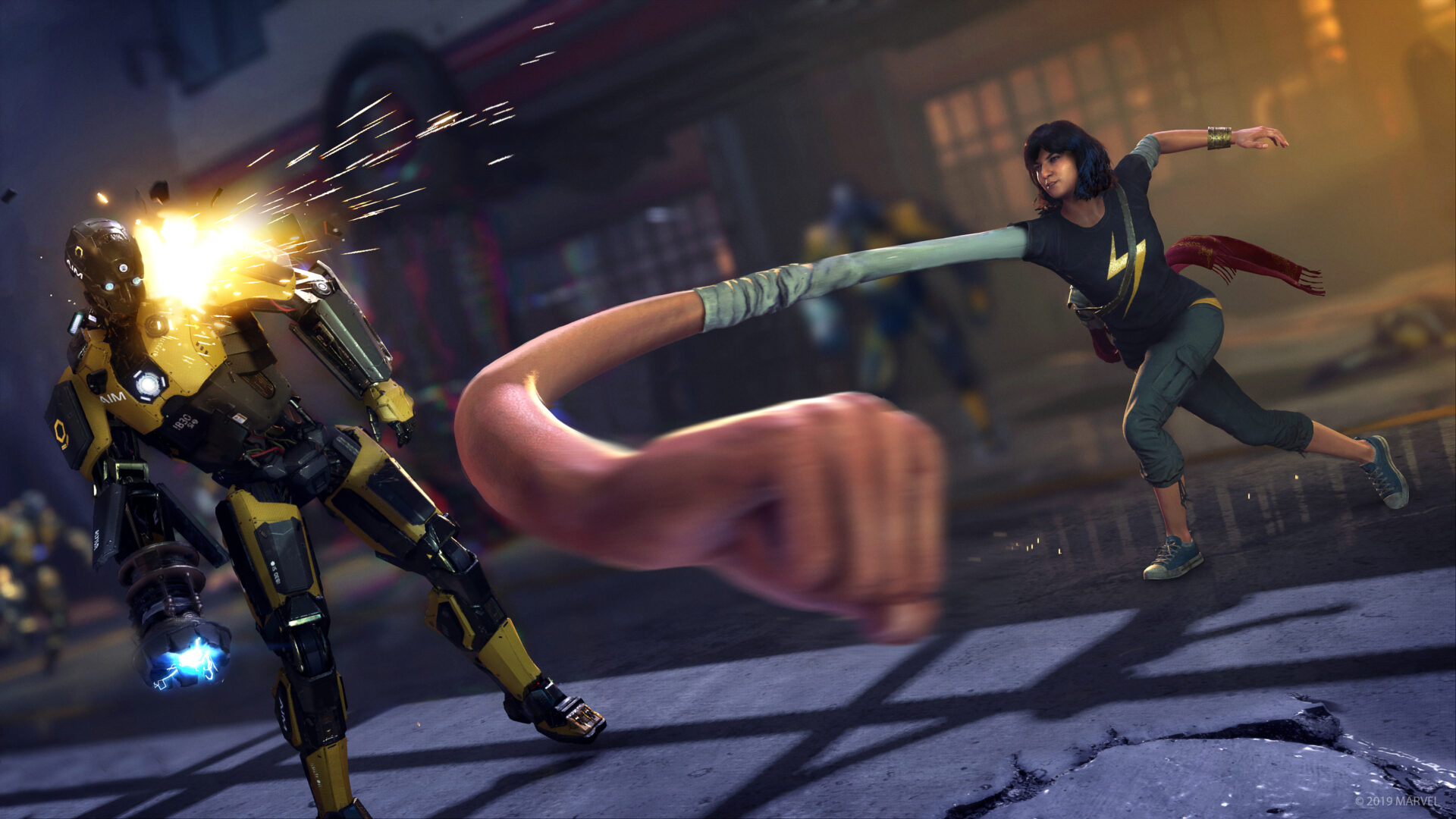 According to a synopsis of the series provided by Disney, “Marvel Studios’ ‘Ms. Marvel’ is a new, original series that introduces Kamala Khan, a Muslim American teenager growing up in Jersey City”

“An avid gamer and a voracious fan-fiction scribe, Kamala is a Super Hero mega fan with an oversized imagination—particularly when it comes to Captain Marvel,” it continues. “Yet Kamala feels like she doesn’t fit in at school and sometimes even at home—that is, until she gets super powers like the heroes she’s always looked up to. Life gets better with super powers, right?”

Ms. Marvel is set to hit Disney Plus on June 8th.

What do you make of Marvel’s changing of Ms. Marvel’s powers? Let us know your thoughts on social media or in the comments down below!

NEXT: Marvel’s Latest Gimmick Is A Desperate Attempt To Make The Eternals Popular