Recently, Lucasfilm president Kathleen Kennedy and actor Ewan McGregor attempted to justify an anguished mental state for Obi-Wan Kenobi while promoting their upcoming Obi-Wan Kenobi Disney+ show. Their explanation clearly show they do not understand the character of Obi-Wan Kenobi, but also fail to understand what it actually means to be a Jedi. 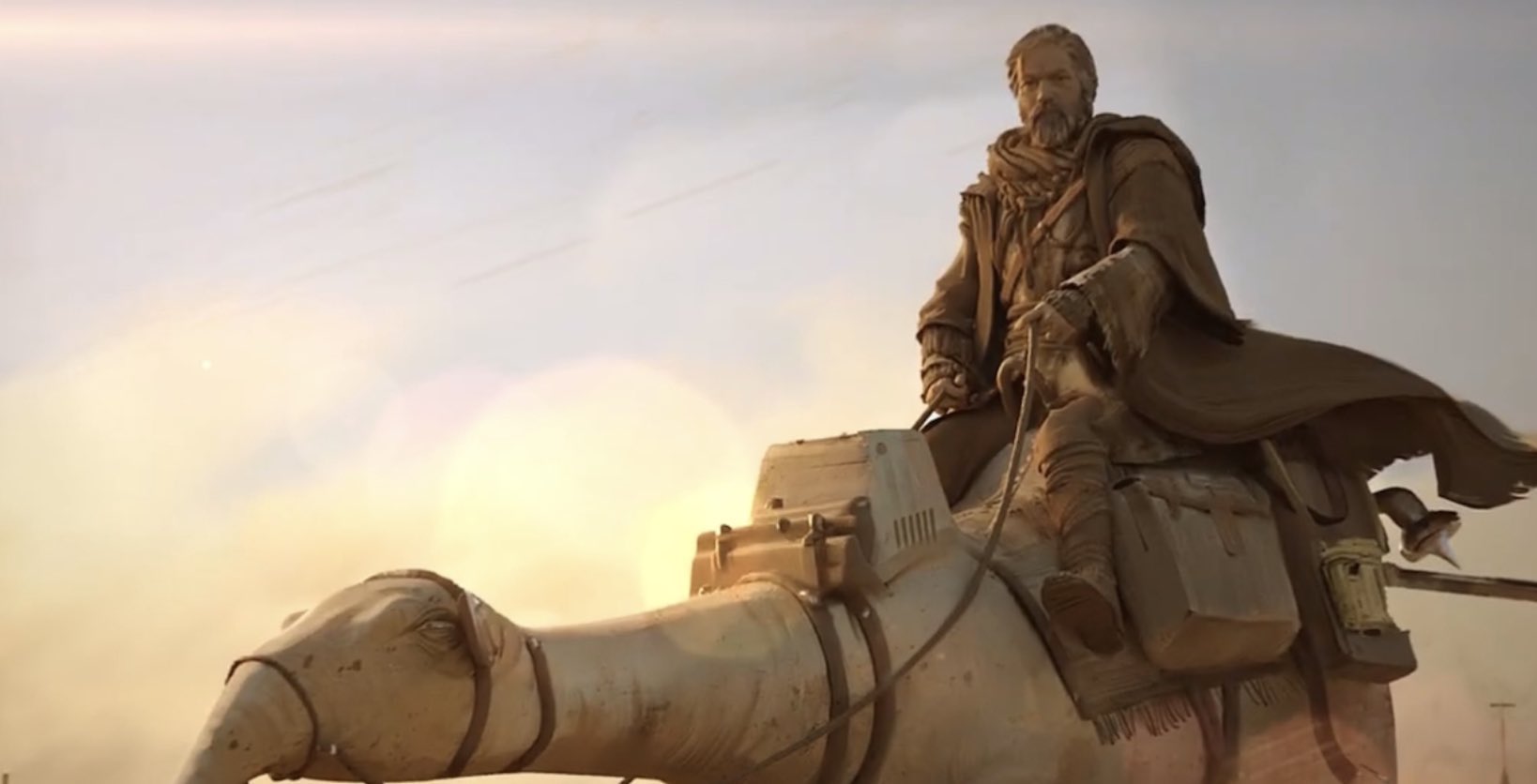 RELATED: Ewan McGregor Describes Obi-Wan Kenobi As “Rather Broken, And Faithless, And Beaten, And Somewhat Given Up”

Speaking to Entertainment Weekly, McGregor told the outlet, “We find Obi-Wan at the beginning of our story rather broken, and faithless, and beaten, somewhat given up.”

He further elaborated on this idea in a much more in-depth article from EW about the show. He said, “He’s a broken man after what happened with the Jedi order at the end of Episode III, but also what happened with Anakin; that he lost him to the dark side. He feels an enormous amount of responsibility for that, and guilt.” 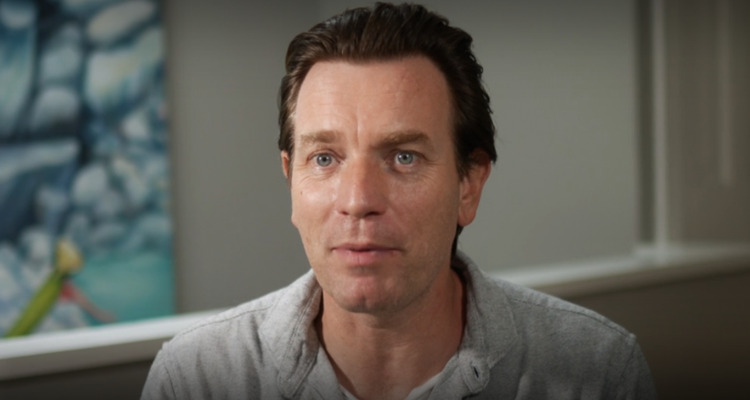 Kathleen Kennedy would echo this characterization of Kenobi telling the outlet, “We’re looking, ultimately, to make a hopeful, uplifting story. And it’s tricky when you’re starting with a character in the state that Obi-Wan would be in coming off of Revenge of the Sith. That’s a pretty bleak period of time.”

She added, “You can’t just wave the magic wand with any writer and arrive at a story that necessarily reflects what you want to feel.”

The show’s writer Joby Harold also stated, “When we last saw Obi-Wan in the prequels, he’s very emotional. There’s a passion to him. And when we get to see him again in A New Hope, he is the Zen master.”

First off, Harold must have forgotten how Revenge of the Sith ends because Kenobi is not emotional at the end of the film. He is emotional following his duel with Anakin and leaving him to die on Mustafar.

However, at the end of the movie, Kenobi is not emotional. He volunteers to watch over Luke Skywalker and then dutifully takes up training to learn how to commune with Qui-Gon Jinn assigned to him by Yoda.

So the whole idea that Kenobi has to go from this passion in Sith to a Zen Master in A New Hope is in all purposes a crock of crap. It’s made up, it doesn’t exist. Unfortunately, it appears to be the whole crux of the Obi-Wan Kenobi show aside from the Inquisitors hunting down Jedi throughout the galaxy and another rematch between Kenobi and Vader.

With that out of the way, this idea that Kenobi is somehow emotionally broken, faithless, and defeated due to the destruction of the Jedi, the betrayal of Anakin, and the ascendancy of the Empire flies in the face of what it means to be a Jedi.

If you recall in The Empire Strikes Back, Yoda tells Luke, “A Jedi must have the deepest commitment, hmm? The most serious mind.”

“This one a long time have I watched. All his life has he looked away to the future, to the horizon. Never his mind on where he was, hmm? What he was doing. Adventure. Excitement. A Jedi craves not these things,” Yoda told Luke. “You are reckless!”

Then while beginning Luke’s training on Dagobah, Yoda would provide more details on what it takes to be a Jedi, “A Jedi’s strength flows from the Force. But beware of the Dark Side. Anger, fear, aggression – the Dark Side of the Force are they – easily they flow, quick to join you in a fight.”

“If once you start down the dark path, forever will it dominate your destiny. Consume you it will as it did Obi-Wan’s apprentice,” Yoda instructed Luke.

Yoda would also advise Luke that he would know the good from the bad when “you are calm, at peace, passive.” Yoda added, “A Jedi uses the Force for knowledge and defense, never for attack.” 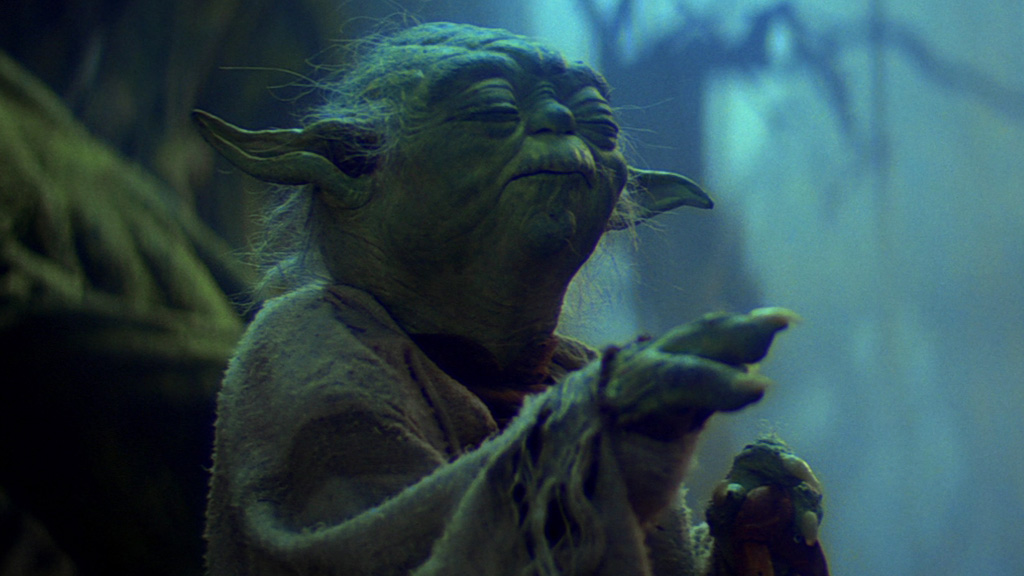 Source: The Empire Strikes Back, Lucasfilm

After Luke attempted to lift his X-wing out of the swamps on Dagobah, and Yoda proceeds to prove to him that it is indeed possible through the Force, Yoda explained the reason why Luke failed is because he lacks faith.

Luke tells Yoda, “I don’t…I don’t believe it.” Yoda responded, “That is why you fail.”

Later on in his training, Yoda would chide Luke on lacking control when he dropped R2-D2 and a bunch of his boxes and supplies from his X-wing.

Clearly, Jedi have strong faith in the Force, they are in control of themselves, they don’t let their mind wander in more ways than one.

They stay focused on the present and are also aware of the temptations and dangers of the Dark Side. They shield themselves from anger, fear, and aggression to prevent them from being consumed by it.

On top of this, they also practice detachment, which is outlined by Anakin in a discussion with Padme in Attack of the Clones.

Padme brings the topic up saying, “Must be difficult having sworn your life to the Jedi not being able to visit the places you like or do the things you like.” Anakin interjects, “Or be with the people that I love.”

Padme then questions, “Are you allowed to love? I thought that was forbidden for a Jedi.”

“Attachment is forbidden. Possession is forbidden,” explains Anakin. “Compassion, which I would define as unconditional love, is central to a Jedi’s life. So you might say that we are encouraged to love.”

George Lucas would provide clarification on his idea of attachment back in 2010.

“The whole idea of the movie, ultimately is that you have the Light Side and the Dark Side,” Lucas explains. “The Light Side is compassion, which means you care about other people. The Dark Side is you care only about yourself. And you are obsessed with yourself. Getting your pleasure and getting all your stuff. The other one, you give it to everybody. You give goodness and health to everybody else.”

What does all of this mean? It means Obi-Wan Kenobi would not be “rather broken, and faithless, and beaten, somewhat given up.”

He’s not “a broken man after what happened with the Jedi order at the end of Episode III.”

A broken and faithless man would no longer be a Jedi, something that George Lucas made very clear did not happen in either Revenge of the Sith nor the original Star Wars film.

Does Kenobi have an emotional reaction and briefly succumb to his passions in Revenge of the Sith following his battle with Anakin? Yes. Despite being a Jedi Master, he is still human after all.

In fact, Kenobi shouts at him, “You were the chosen one! It was said that you would destroy the Sith not join them! Bring balance to the Force, not leave it in darkness!”

When Anakin replies, “I hate you!” Kenobi responds, “You were my brother, Anakin. I loved you.”

However, by the end of the movie, he’s back in control of his emotions. He clearly hasn’t abandoned his faith in the Jedi or the Force despite the nigh complete destruction of the Jedi Order, the transformation of the Republic into the Galactic Empire, and the fall of his Padawan to the Dark Side and his corruption into a Sith.

His training allows him to guard himself against the quick, easy, and seductive path of the Dark Side that would lead him to despair. Kenobi is committed to the Jedi Order and has a serious mind. This is all shown in his resolve to bring Anakin heel, his rebuke of the Sith, and ultimately his choice to cut Anakin down on Mustafar. 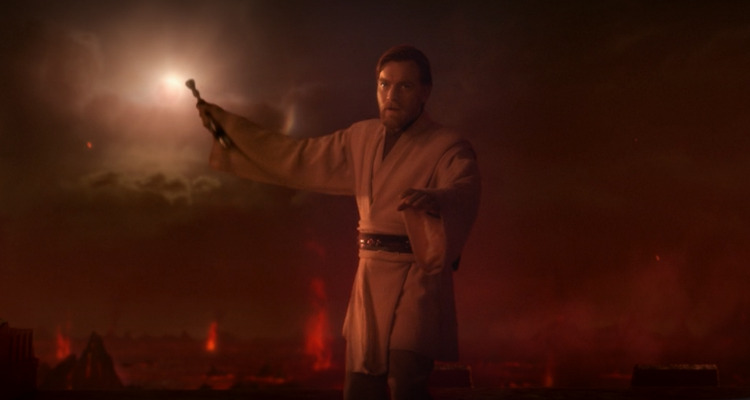 Instead of falling into despair as Lucasfilm now claims he did, Kenobi volunteers to protect and watch over Luke Skywalker on Tatooine. He then is tasked with further training to learn how to commune with Qui-Gon Jinn and then eventually learn how to become one with the Force with him.

These actions clearly show he is not “broken, and faithless, and beaten, somewhat given up.” He’s not a “broken man.” In fact, it’s the opposite, he’s still faithful, resolved, and dare I say hopeful when he hears of Yoda’s instruction to train under Qui-Gon Jinn.

It’s almost like the promise of eternal life through oneness with the Force can blunt this whole idea of an Obi-Wan Kenobi falling into despair that McGregor, Kennedy, and Harold describe.

And if you want real world parallels of people being faced with seemingly world-crushing events and still not giving up their faith, look to the thousands of martyrs of the Catholic Church.

One such example is St. Philomena. When Philomena was 13-years-old she took a vow of consecrated virginity. Upon arriving in Rome, Emperor Diocletian wanted to marry her, but she refused. In response, Philomena was brutally tortured, scourged, drowned, and even shot with arrows. However, she still refused. Eventually, Diocletian would have her beheaded. 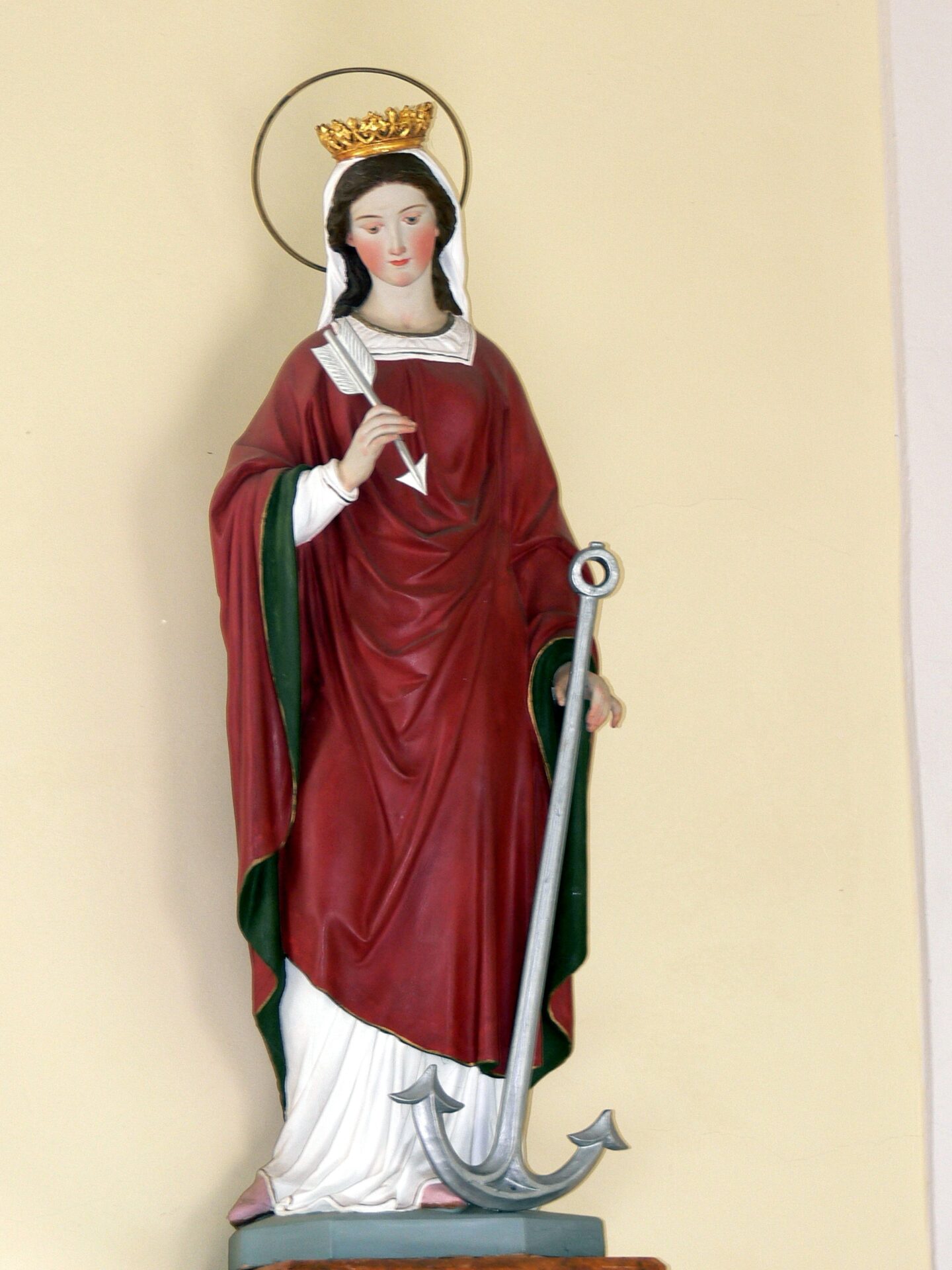 Another example can be found in Daniel Chapter 3. Shadrach, Meschach, and Abednego refused to worship the false idols of King Nebuchadnezzar.

They told Nebuchadnezzar, “There is no need for us to defend ourselves before you in this matter. If our God, whom we serve, can save us from the white-hot furnace and from your hands, O king, may he save us! But even if he will not, you should know, O king, that we will not serve your god or worship the golden statue which you set up.”

Nebuchadnezzar then threw the three men into his white-hot furnace and attempted to burn them alive. However, the three did not fall into despair and give up. Instead they sang God’s glory, and in the end God spared them.

It also saw Nebuchadnezzar convert and decree, “that whoever blasphemes the God of Shadrach, Meshach, and Abednego shall be cut to pieces and his house made into a refuse heap. For there is no other God who can rescue like this.” 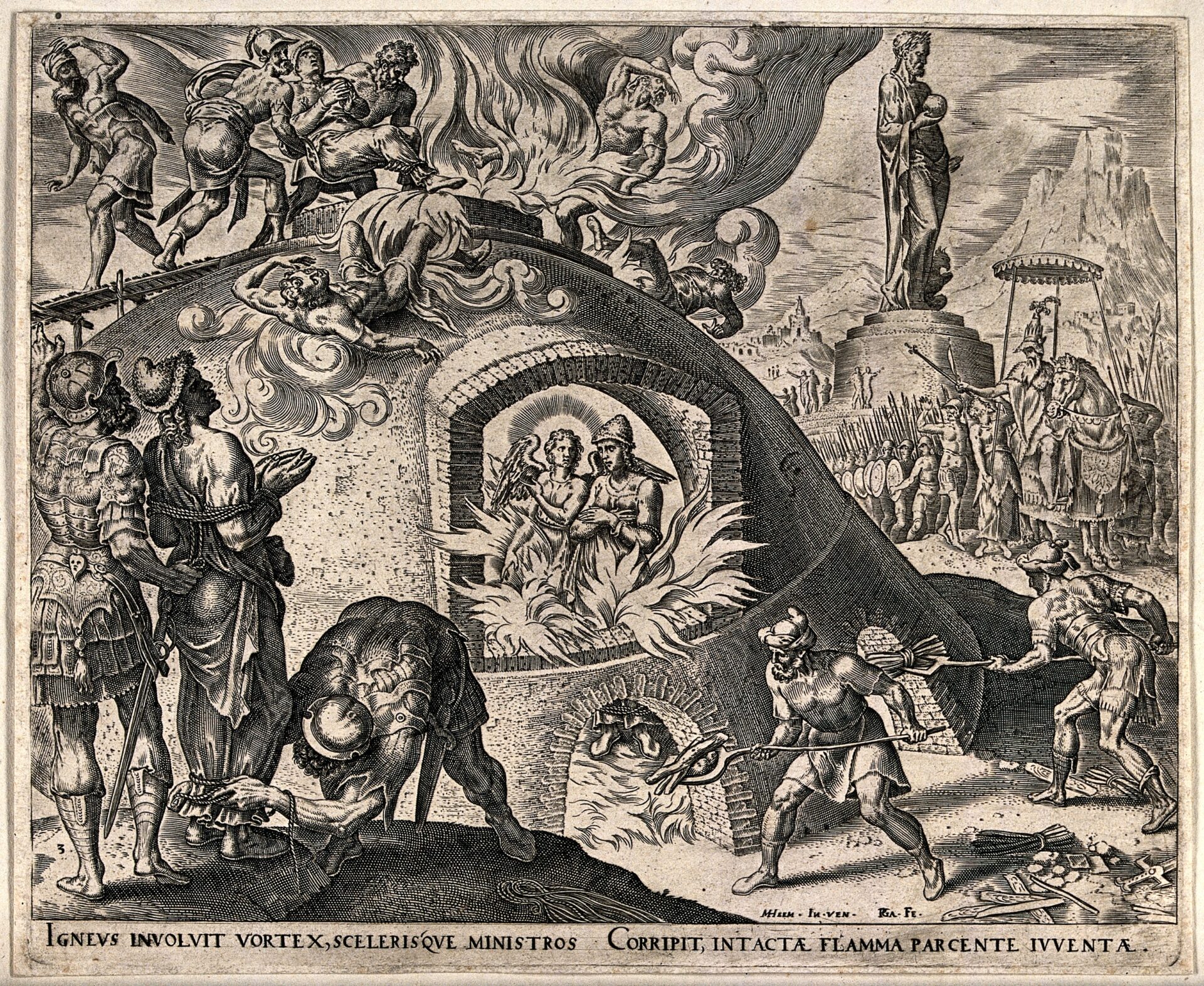 If that sounds similar there are clearly parallels to Luke Skywalker’s refusal to give up his Jedi principals even upon pain of death under the torture of the Emperor.

And while Luke doesn’t convert the Emperor, he does bring his father, Anakin Skywalker, back into the fold as he tosses the Emperor down the central shaft of the Death Star to his death.

Like Luke Skywalker, Obi-Wan Kenobi would not so easily fall into despair despite the world seemingly falling down around him. That’s not who Obi-Wan Kenobi is. That is not how someone truly dedicated to the Jedi would act.

And the fact that Lucasfilm is embracing this idea truly shows they have no clue about Obi-Wan Kenobi, Luke Skywalker, and the Jedi.

NEXT: Resurfaced Charles Soule Tweet Explains Why Current Star Wars Is A Disaster