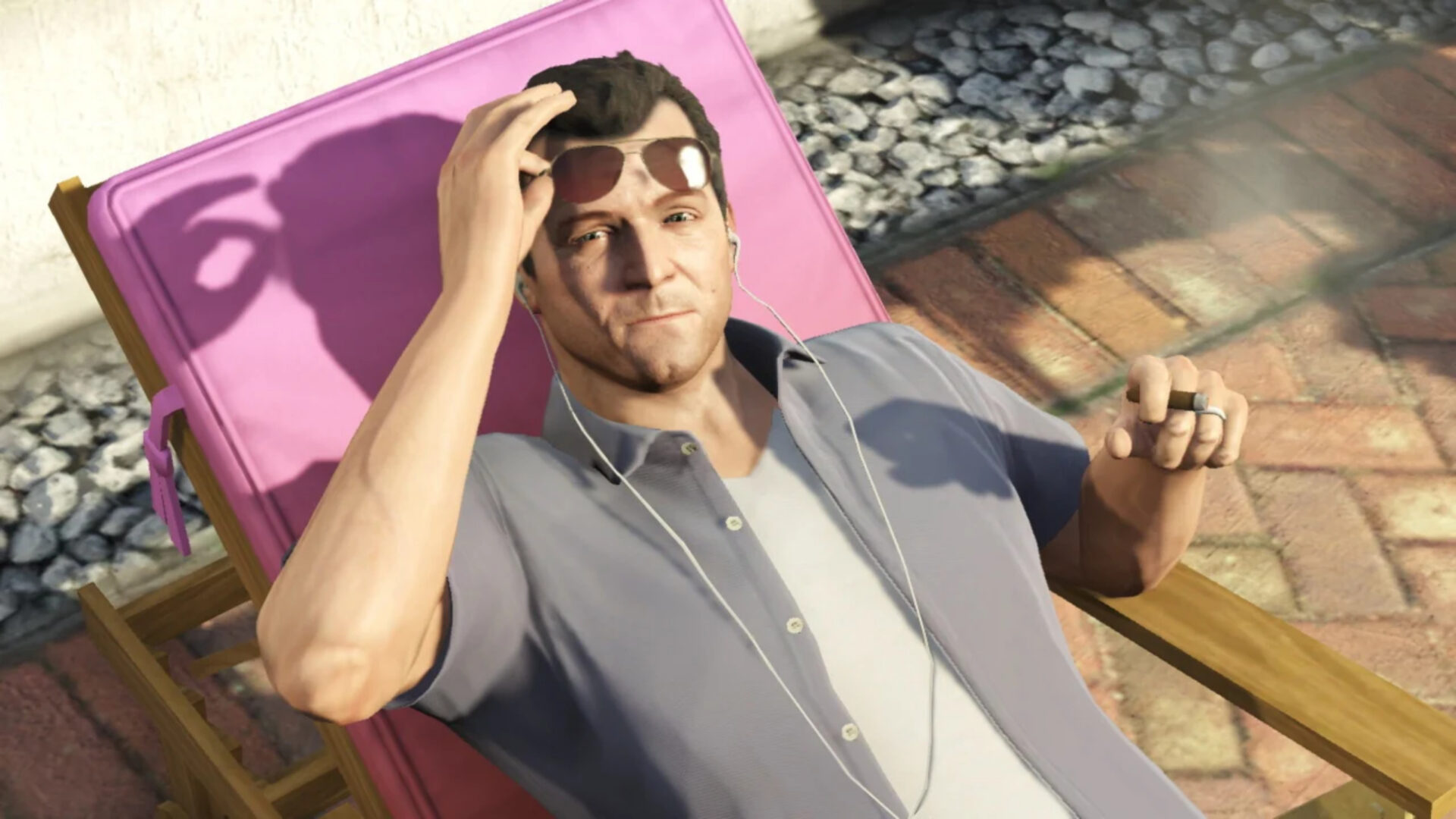 The discovery of Rockstar’s censorship began on April 6th when Reddit user /u/JayProspero took to the GTA Online subreddit to ask others if they had noticed the removal of the ‘Interstellar Transgender’ action figure – which proudly featured ‘interchangable genitalia’ – from one of the in-game storefronts.

In its place, as shown by /u/JayProspero, now sits Space Tramp, a generic looking character who posses “posable vomit direction”. 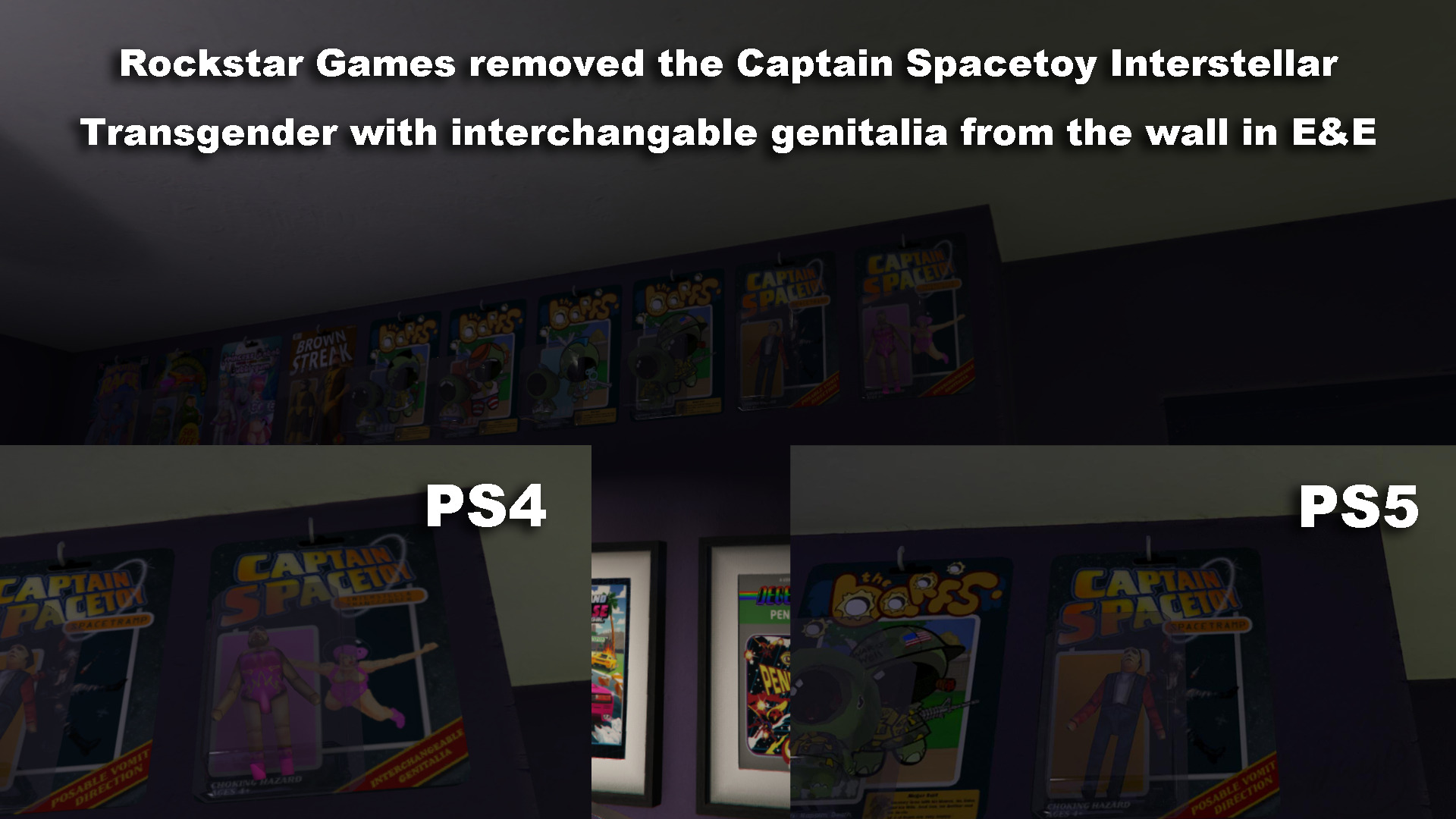 Source: /r/gtaonline “Did anyone else notice Rockstar removed this toy from E&E?“, /u/JayProspero, Reddit

“This could be following a plea from OutMakingGames last year,” she added. “I hope this provides comfort to anyone who felt these NPCs depicted harmful stereotypes.”

The above mention of ‘Cockatoos’ refers to an in-game LGBT nightclub where some queuing male patrons would appear as cross-dressers or drag queens, the latter of which were blatant caricatures featuring heavy muscle definition, clear jawlines, and extremely masculine frames.

Said NPCs will also spawn outside the game’s other LGBT nightclub, the Penal Colony. 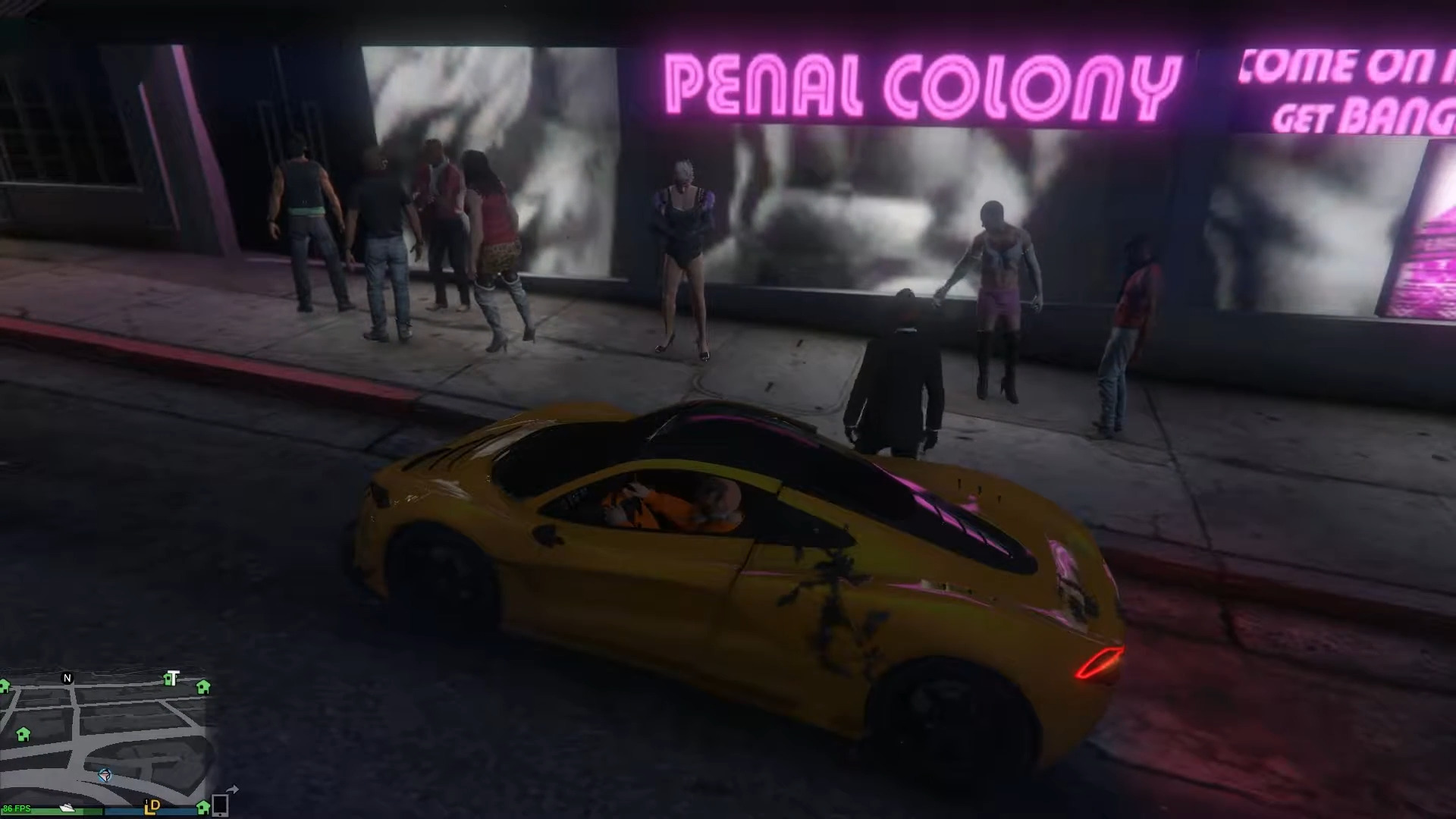 Sharing a comparison of the original PC release and the updated PS5 version of GTAV, Cloud further detailed that “the models still exist in Director Mode at the moment but their dialogue options have been removed (presumably this means protagonist dialogue lines to these NPCs about using hormones etc are therefore unused now too).” 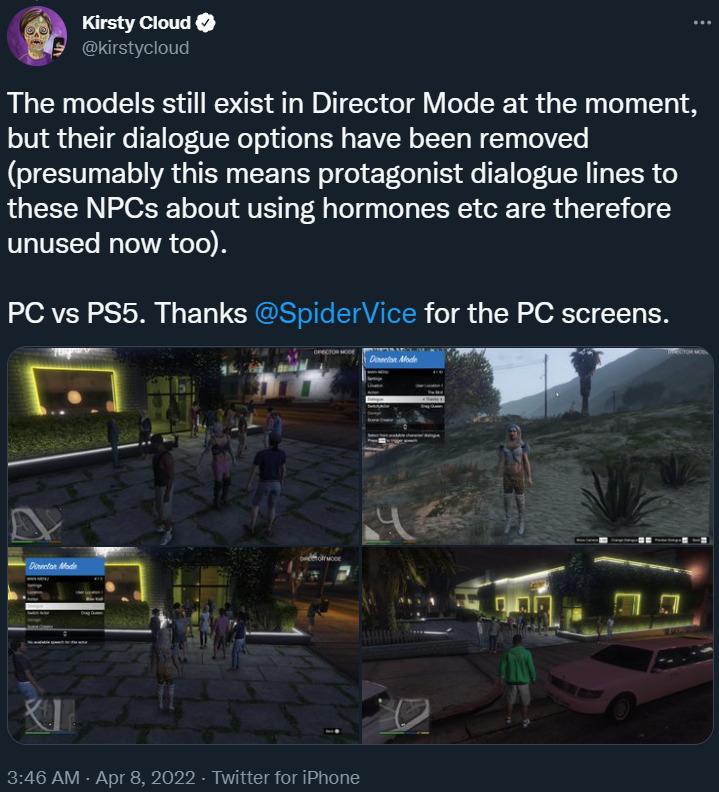 “To clarify,” she noted, “I specified ‘drag queen’ as that’s the name of the model in the game, and in the PC files they’re labelled as ‘transvestite’. Didn’t intend to conflate them all into the same thing.”

As mentioned by Cloud, Out Making Games – a self-described “empowered community of LGBTQ+ games professionals across the UK” who aim to “[support] one another as well as those aspiring to join the industry” – previously objected to what they believed to be GTAV’s “transphobic content”.

In a now deleted open-letter originally published in September 2021, OMG stated that they were prompted by Kotaku’s own declaration that “GTAV’s Enhanced 2022 Release Should Leave The 2013 Transphobia Behind” to call on the developer “to remove transphobic elements from the game and have a positive impact on the new generation of players who will pick up a copy.” 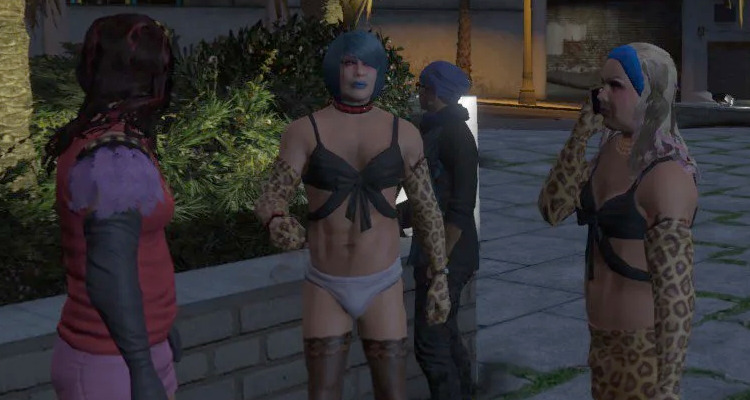 “As Carolyn Petit writes in Kotaku, unlike for other random NPCs in GTAV, the game appears to purposefully play into extremely harmful stereotypes of trans and gender diverse people to encourage players to be repulsed by them, and even to relish hurting and killing them,” wrote the group.

“We reject any argument of ‘equal opportunity violence’ against all types of characters in GTAV,” on the grounds That argument is missing the point,” they continued. “Given the cultural impact GTAV has around the world, Rockstar has a social responsibility to your players (many of whom may be LGBTQ+), to your staff and to the world at large to not promote violence against trans and gender diverse people.” 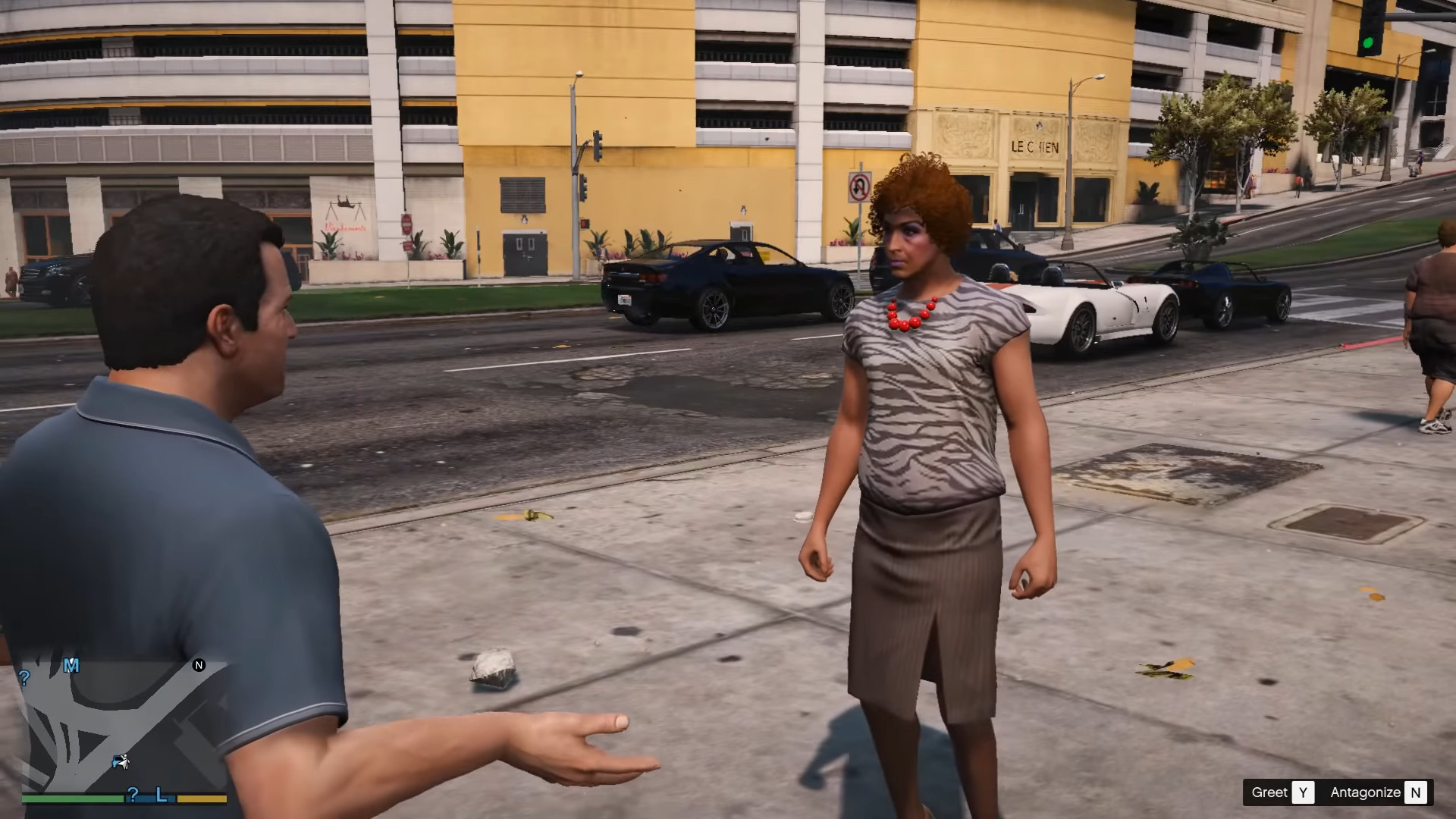 The aforementioned “encouragement” presumably refers to how player characters can sometimes get into verbal exchanges with NPCs. While most insults are generic, the drag queen NPCs can prompt specific insults.

“Last year we wrote an open letter to Rockstar Games, calling on them to remove transphobic content from Grand Theft Auto 5’s next gen release,” opened a statement released by the group on April 18th. “We’re thrilled to say that it appears they have.” 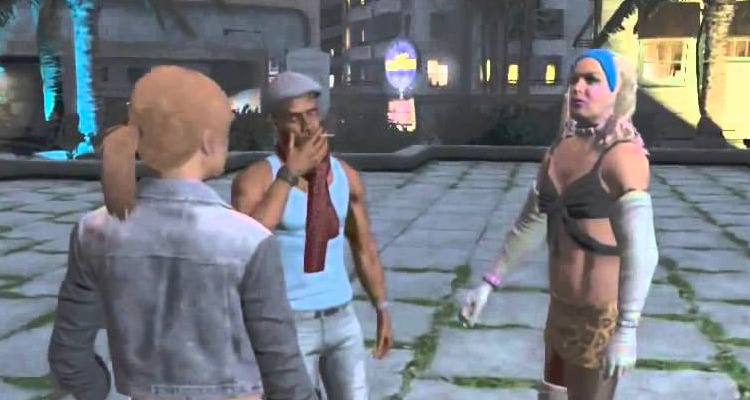 Citing Cloud’s tweets, the group added, “Although there has been no official announcement from Rockstar, GTA Community has reported on specific instances where the content has been changed or removed,” before gushing, “Thanks and credit to Carolyn Petit for the article that prompted us to write the letter and to all the outlets who covered the issue over the lifetime of the game.” 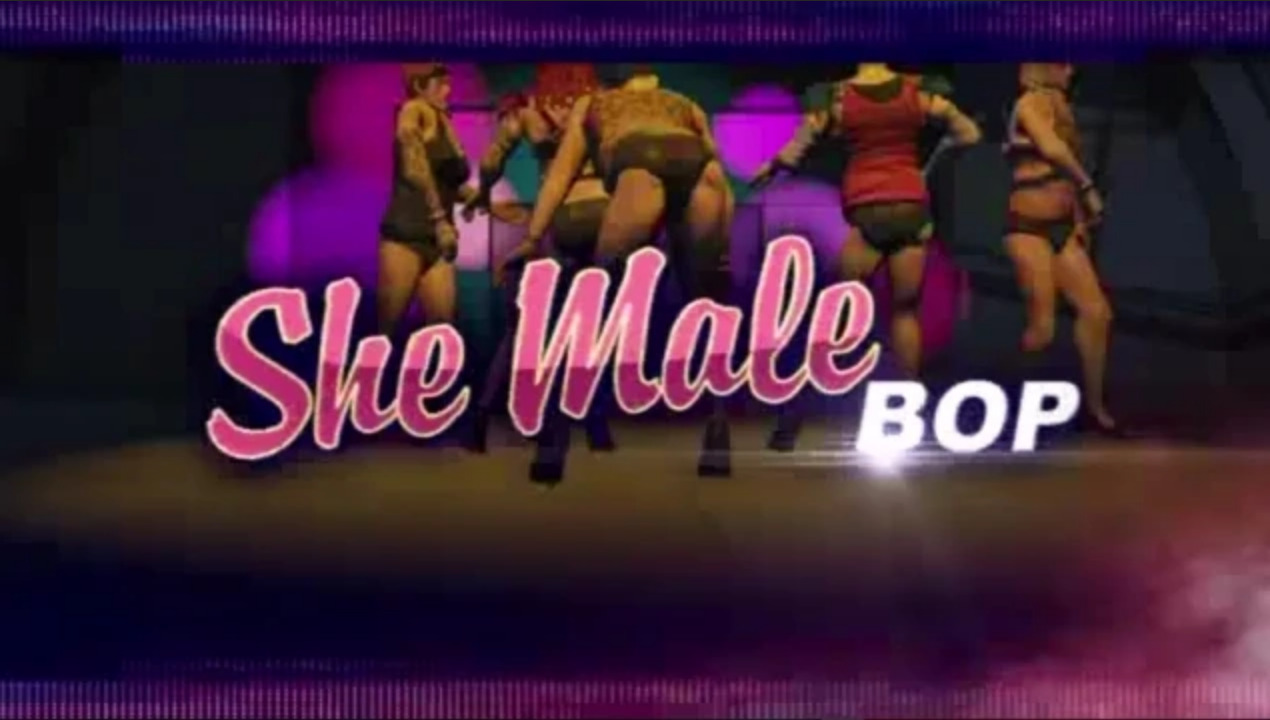 “Grand Theft Auto V is a wildly popular game with millions of players worldwide and this change can have a huge impact on the way that those players see trans people,” OMG concluded. “Thank you to everyone at Rockstar who prioritized this issue – we ourselves are game developers and understand that even small changes like this take coordinated time and effort.” 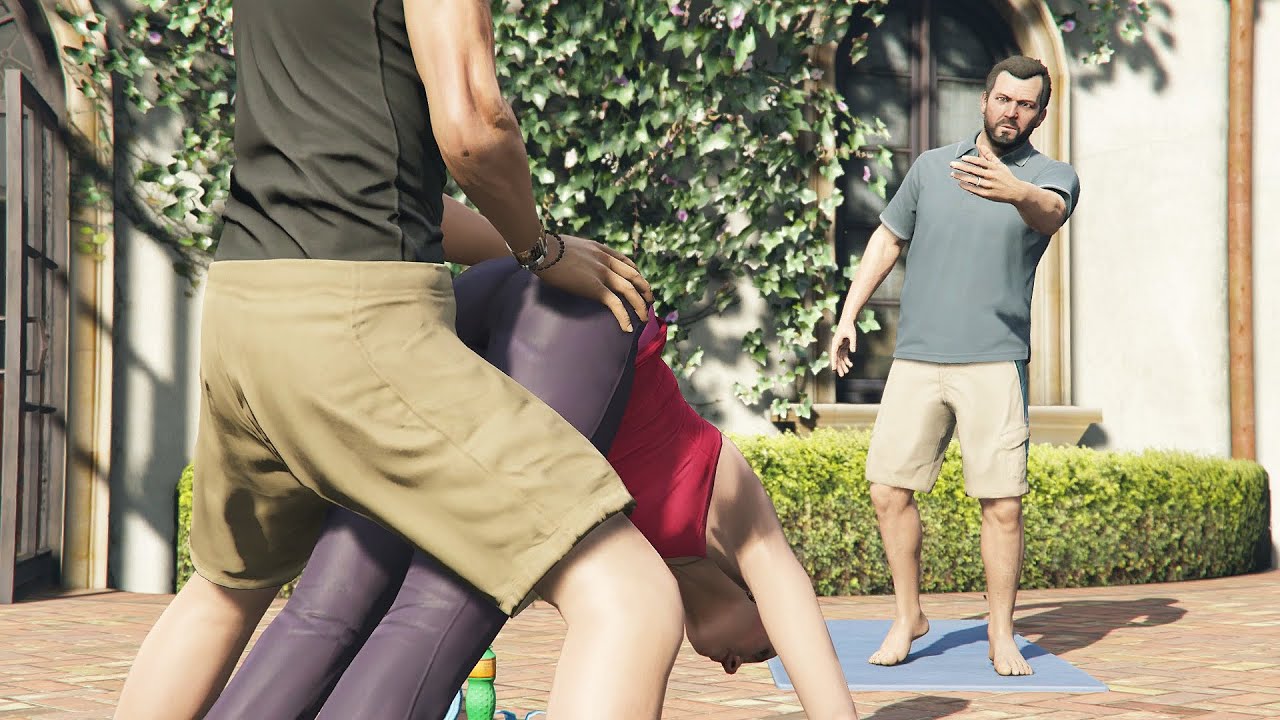 These changes were also celebrated on Twitter by Rockstar Game Tester and English Text analyst Emily Evans, who in 2021 publicly claimed her employment with the studio by declaring, “officially been working for rockstar three years as of today and just wanna say, damn i still love my job.”

In light of the above discoveries by both /u/JayProspero and Cloud, Evans tweeted on April 15th, “sorry not sorry but gamers who are mad at r* removing the transphobic stuff from gtav aren’t gamers i care about.”

She would later elaborate, “for context as a few people have asked and i’d rather not explain directly on it for obvious reasons, check out this great thread by @kirstycloud (who sums it up better than i could anyway)” 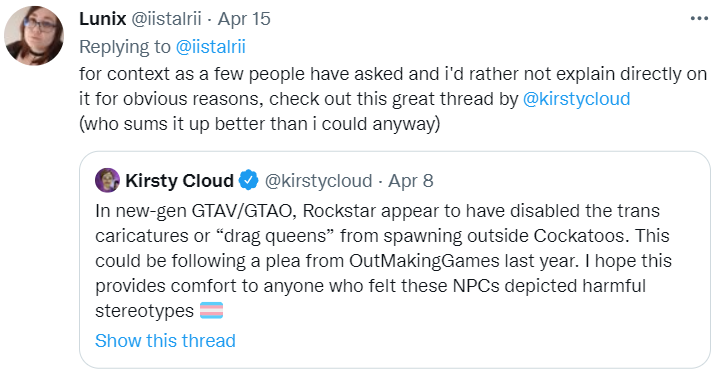 In response to @SeanMWin, who concurred, “It’s such an odd mentality. Reminds me of the time that they protested about keeping the statues of slave owners erected. ‘But it will get rid of history’. No, history will still be taught, the same way that we can learn from our past regressions and make it right in the present,” Evans echoed, “Exactly”.

“Throwing the statues in the harbour and such doesn’t suddenly erase years of stuff happening like???” she exclaimed. “Make it make sense (spoiler, it doesn’t)” 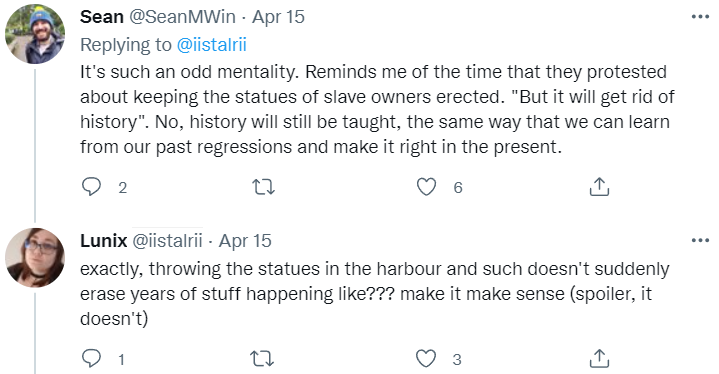 As for Grand Theft Auto V Expanded & Enhanced edition itself, while critics have praised the next-gen port, fans are furious at what they see as an attempt by Rockstar to nickle-and-dime fans who have already supported the game for the past nine years – especially those who regularly played GTA Online or subscribed to GTA+

What do you make of Rockstar’s edits to GTAV? Let us know your thoughts on social media and in the comments down below!