The former developer of Star Wars Jedi: Fallen Order, who claimed that pitches for a black and female protagonist were rejected, went on a Twitter rant not only claiming she has been attacked for not speaking up for other demographics by woke scolds, but claimed people on the right “systematically oppress others, strip people of their rights, litterally (sp?) kill black people without consequence,” and more. 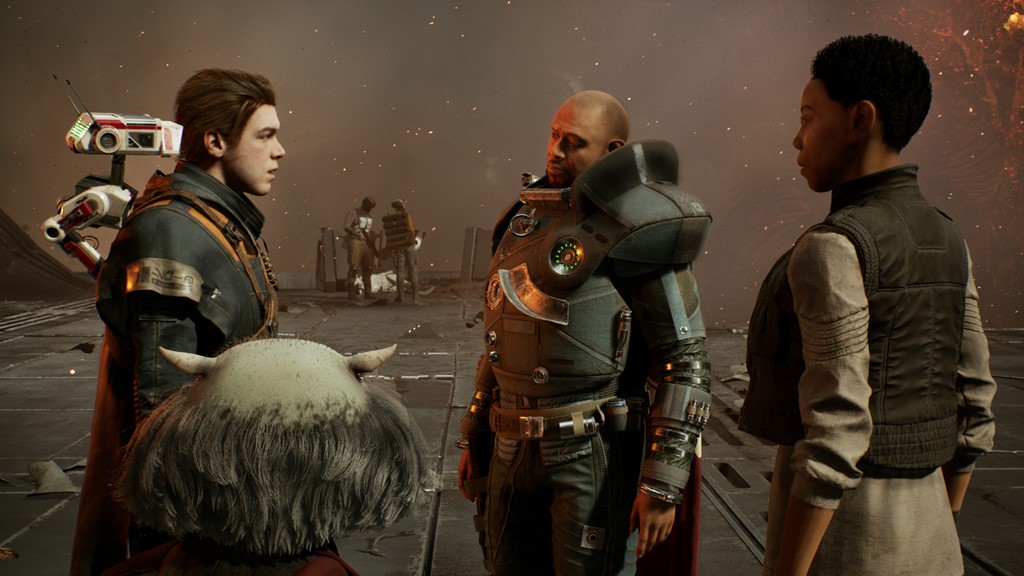 RELATED RUMOR: Star Wars Jedi: Fallen Order Sequel Not Launching Until 2023, Will Be For PC And Next-Gen Consoles Only, No Last-Gen

As previously reported, former Lighting Artist for Respawn Entertainment Nora Shramek claimed pitches for a black or female lead character were rejected, allegedly being told “We already have 2 black people in the game. Rey is a woman & we can’t do that to’ guess what the demographic of the people making those decisions looked like?”

“If those individuals have massive privilege and by the nature of thier [sic] life experience shelter them from a full view that means they need to be extra intentional about thier [sic] choices,” Shramek proposed.

As Shramek’s claims were reported on and discussions continued, Shramek defended that she told the truth, and that she merely wished to highlight an issue she felt was prevalent across the industry. “That’s a market. That means we want to se [sic] ourselves as the lead,” Shramek tweeted.

“Also despite the very loud or disgruntled minority who decries the loss of thier staus [sic] as the default, the protagonist, the norm, most ‘white guys’ I know are chill cool dudes and allies are are fine playing […] Someone who doesn’t look like them. He’ll they even advocate for it as they know it’s good for everyone.” 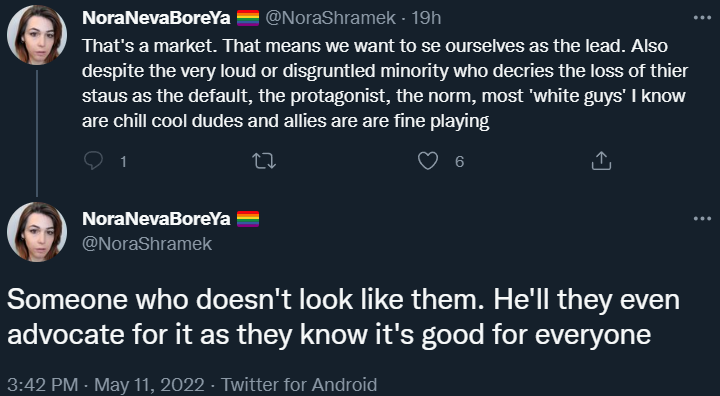 Discussion continued long after Shramek had seemingly put the matter to bed, later locking replies to her original and future tweets. While some replies could certainly be deemed abusive — or at least abusive while trying to poorly convey a counterargument — some appeared to agree with Shramek.

“*pretends to be shocked that old white dudes decided something over a popular opinion among the dev team* yeah creative industry,” @ElPouleto snarked.

“Guess making the character ginger was as diverse they wanted to go,” agreed @InfiniteRhizome. “Always felt like the mc was way too bland and they were playing it safe. Could’ve been a far more interesting character had they listened.”

Even so, the majority of comments appeared to be against Shramek’s critique. “How exactly is this bad?” implored @DillonTHoang.

“The game was a massive success. Representation doesn’t matter,” @DillonTHoang proposed. “I’m Asian and Hispanic and I don’t scream to the heavens I need to be repped in media. If that’s needed in life to be repped in a fictional world, you have a lot more problems than just that” 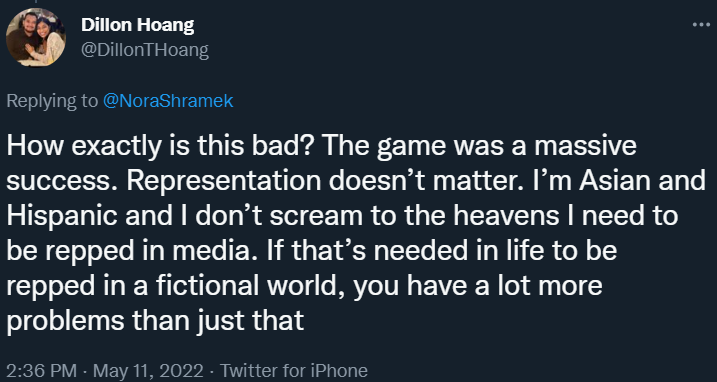 “You tokenizing SJWs are so silly and annoying,” ranted @TardiveT. “You want every character to be a token.”

“People wouldn’t care if races varied naturally but when you know teams of people like you are puppeteering it, it destroys immersion. You’re the other side of ‘everyone has to be white male.'” 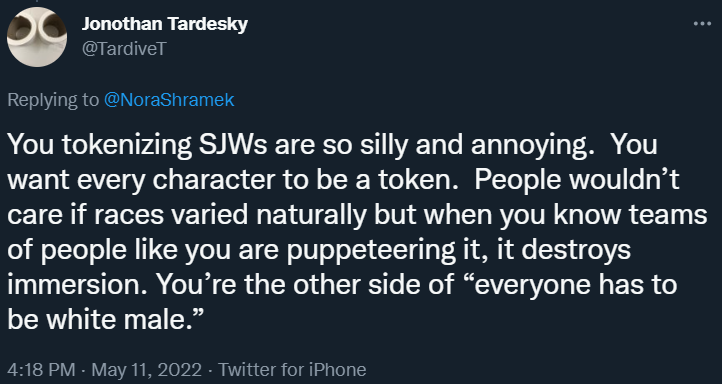 “I’m gonna ask the hard question here: why does every new character have to be non-white/ female/ gay?” inquired @Phils_Boyfriend. “Yes, there are some characters that fit those descriptions, but there’s nothing wrong with introducing new straight white male characters as well. Those people still exist.”

RELATED: This Is How May The Fourth Dies…With Thunderous Silence 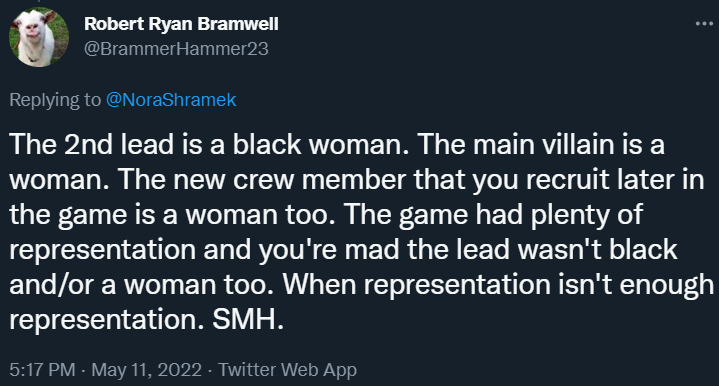 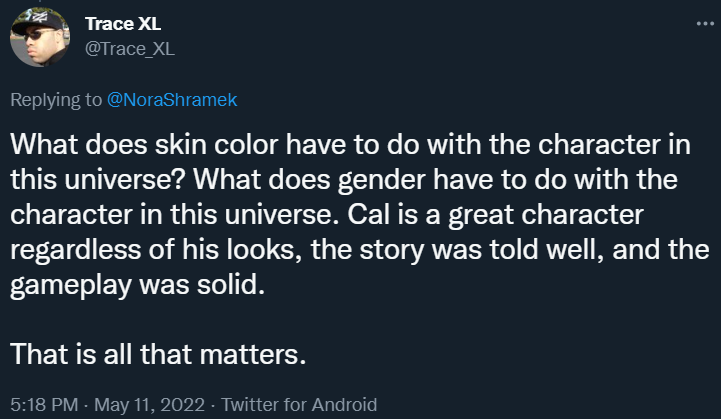 @AnthoneySoprano played out an exaggerated roleplay of how the supposed Respawn Entertainment meeting went. “‘So, the main character is going to be white,’ ‘What if we switched a white redhead man, for a black/women character?’ ‘Wow. How forward-thinking of you. How did you come up with such an original idea swapping out a gender/race for another one?'” 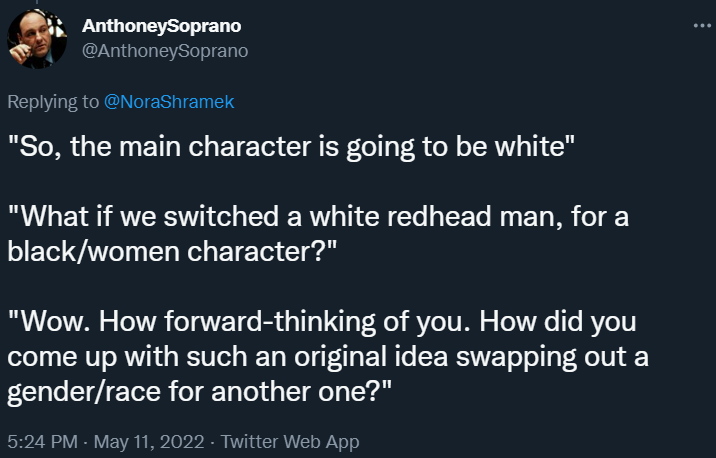 Shramek would proceed to defend her claim insisting, “OMG people! Devs including me on JFO DID bring up othe races and species and orientations.”

“My tweet was about one of those times it was brought up and that day in that room, one of us said why can’t they be someone like a black person or a woman,” she added.

Shramek then claimed, “I’ve had more hate mail in the last 24 hours form people from x group saying wtf didn’t you fight for my demographic than from bigots, racists, and misogynists,” S

She added, “This blows my mind! I’m/ we were litterally fighting for representation for everyone who wasn’t a straight white man..”

“And somehow people can’t understand the nuance of that enough, to stop themselves from dm yelling me to make the false claim we did not care about thier group?! Im vexed,” Shramek confessed. “Instead of @ a company you want to have more representation from you atrack someone fighting foe that thing?!”

“This is why we on the left are so bad at organizing, affecting change, ect.,” Shramek lamented. “We only care about our specific demographics and can’t understand how coalitions can support each other and in doing so help ourselves. The right is great at it.”

“They see the big picture, unify and support anything that falls within the broader goals of the far right and support people, initiatives, and organizations, who push any of those goals,” Shramek claimed. “We just fight amongst ourselves though, only focus on our individual issue.”

“DMs off. Tired of being attacked by the very demographics myself and others fought for,” Shramek later tweeted. “Attacking your allies is not helpful and in fact utterly counter productive.”

“Maybe in the future use that energy to take those complaintm [sic] to companies who aren’t giving you diversity not people litterally fighting for you and the cause.” Shramek later stated she had left Twitter for the foreseeable future. 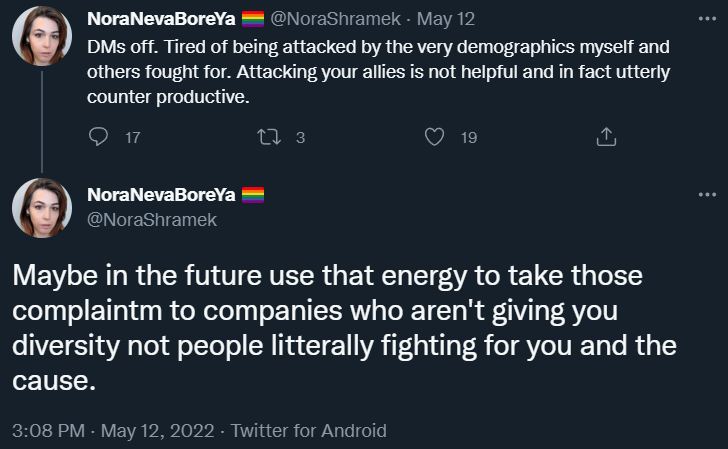 NEXT: Emperor Palpatine Chose The Right Apprentice For Each Phase Of His Plan To Conquer And Rule The Star Wars Galaxy