The highly anticipated Blue Lock anime adaptation has received its first trailer and key visual, as well as an official release date.

Written by As the Gods Will mangaka Kaneshiro Muneyuki and illustrated by Nomura Yuusuke, Blue Lock is an extremely popular manga that has been been serialized in magapoke since August 2018.

As described in a synopsis provided by the series’ English-language publisher Kodansha, “After a disastrous defeat at the 2018 World Cup, Japan’s team struggles to regroup. But what’s missing? An absolute Ace Striker, who can guide them to the win.” 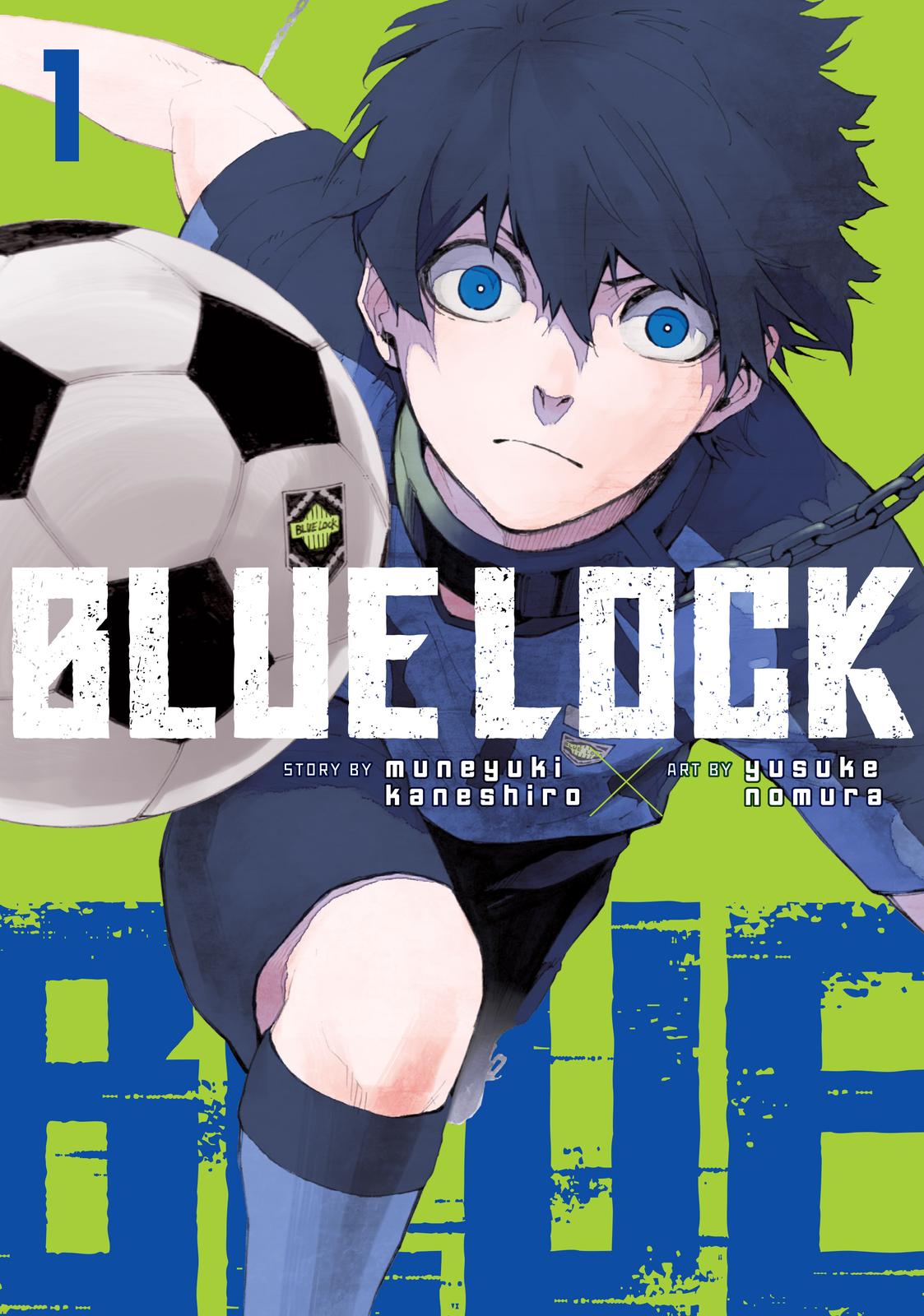 “The Football Association is hell-bent on creating a striker who hungers for goals and thirsts for victory, and who can be the decisive instrument in turning around a losing match…and to do so, they’ve gathered 300 of Japan’s best and brightest youth players,” it continues. “Who will emerge to lead the team…and will they be able to out-muscle and out-ego everyone who stands in their way?” 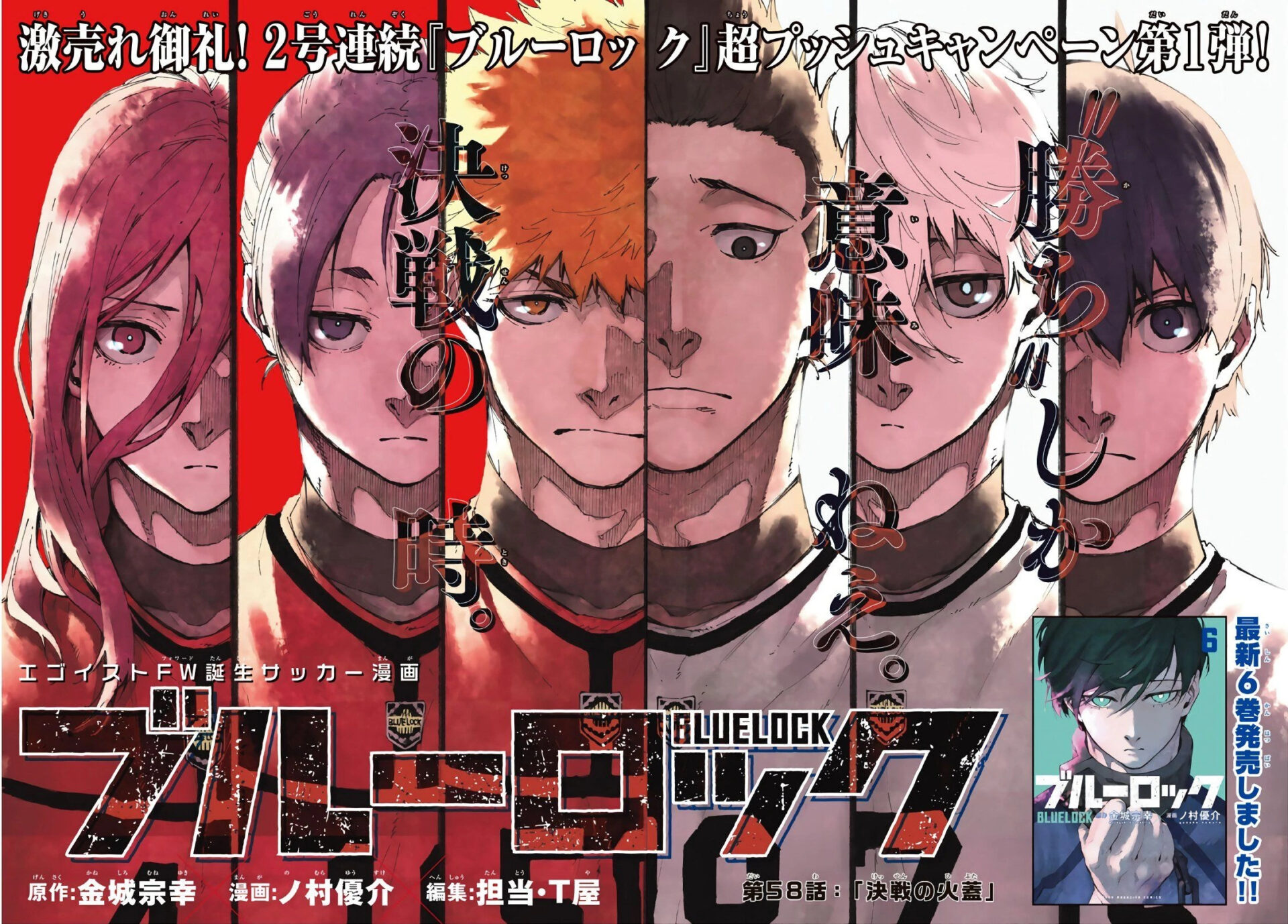 On May 13th, the official Blue Lock anime Twitter account debuted the series’ first key visual, alongside the announcement that the series would begin airing in “October 2022” on Japanese broadcaster TV Asahi.

The trailer begins on Isagi Yoichi (CV: Kazuki Ura), walking home defeated and depressed in the aftermath of his high school team losing the Saitama prefectural finals and facing the reality that they just couldn’t make that last step to Nationals.

As Isagi reflects on his dreams, the trailer cuts flashes back to the first time he saw French soccer player Noel Noa play on TV.

“I was entranced by your plays,” Isagi narrates across a shot of his young team mates commenting on how unstoppable he is. “I just looked up to you. Kept playing soccer.” 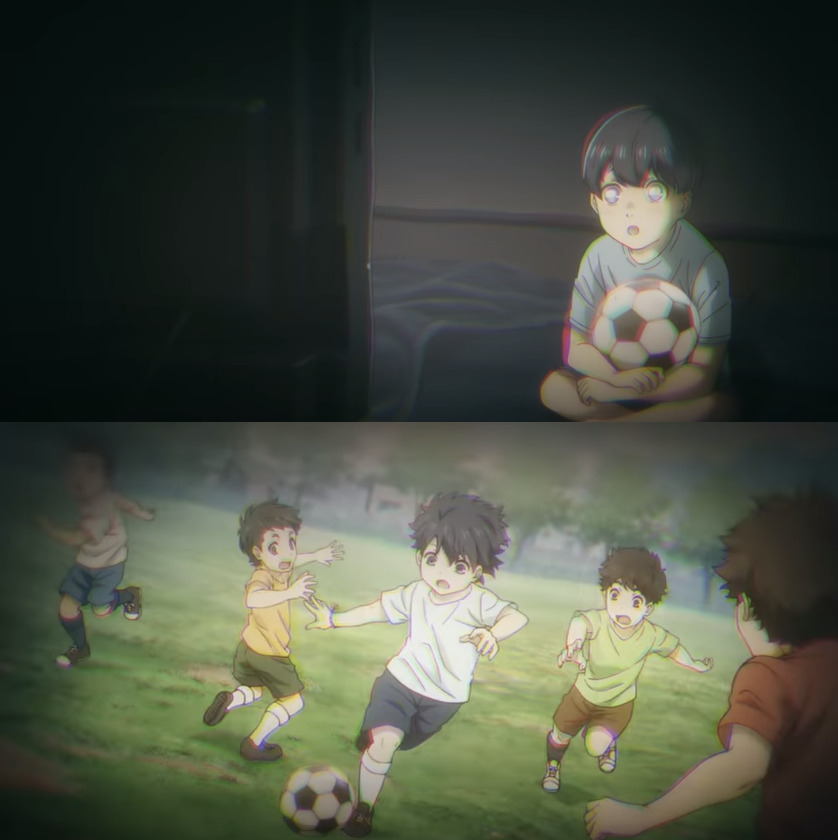 RELATED: Made in Abyss: The Golden City of The Scorching Sun Gets Second Trailer, Reveals New Characters And Theme Songs

Isagi is then heard questioning how his life would have been different if he was his rival Kira instead of basically being the Krillin to Kira’s Goku, asking “If only instead of passing, I’d taken the shot, could I have changed my destiny?” 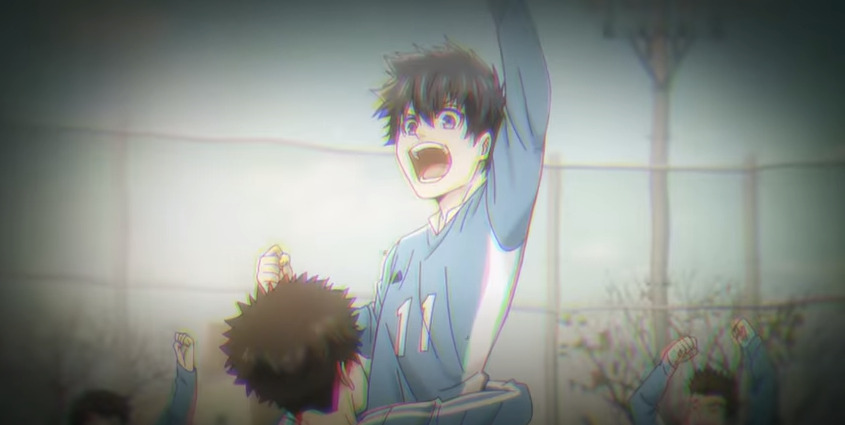 The trailer then transitions to Isagi facing the reality that his dream not coming true, as he begins to cry, “Soccer is a sport played by eleven people right?  You can’t win on your own. One for all. I wanted to win!” 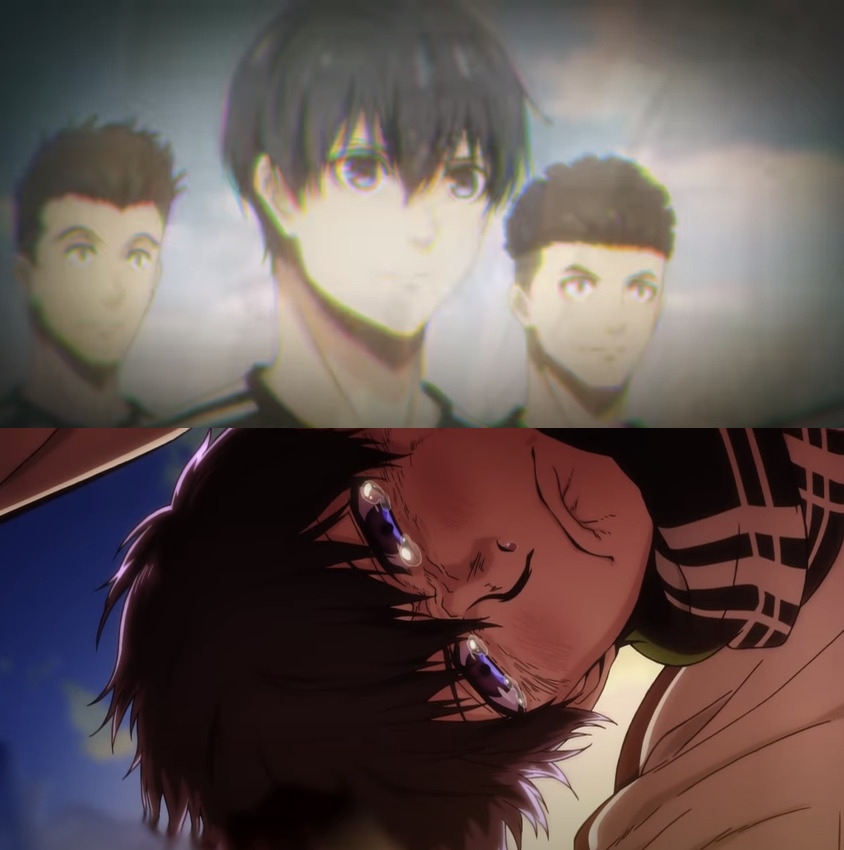 In an odd choice, the Blue Lock production team decided to put the beginning of Jinpachi Ego’s (CV: Hiroshi Kamiya, Trafalgar D. Law, One Piece) big speech from the end of Chapter 1 towards the end of the trailer and the end of it at the beginning.

“Rejoice in your own goals and live for nothing but that moment,” the team coach tells the protagonist. “That’s what it means to be a striker.”

Next up are quick shots of the Blue Lock facility, including the team gym, cafeteria and of course, soccer field.

The blue print theme is exactly how it is supposed to look like in the manga. The only difference here is that the trailer is give us a first-person POV of the facilities, rather than the ‘chart’ visuals given to us in the source material. 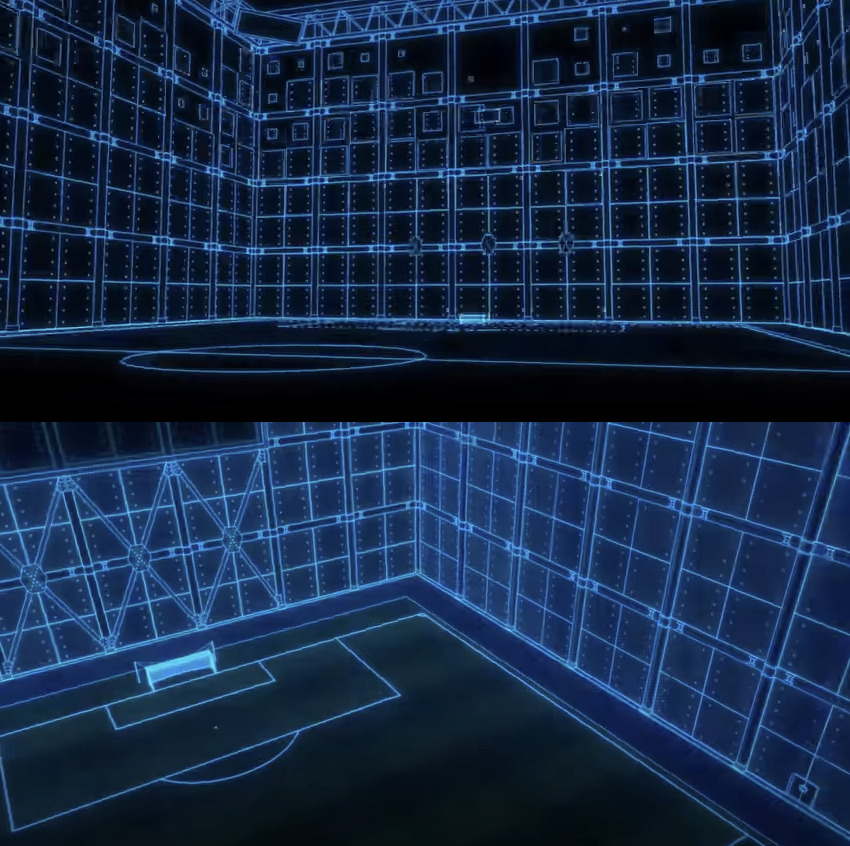 Zooming out, the camera shows the full overall structure of Blue Lock.

While these shots look to pretty accurately recreate the team base, we’ll wait for the finished product to pass final judgement.

We next jump back to Ego’s speech, wherein the team coach presents a hypothetical scenario to the 300 players who compose Blue Lock’s various strata: It’s a one on one showdown with the goal keeper, and the player could either pass and get a guaranteed score or take a gamble and score the goal himself. 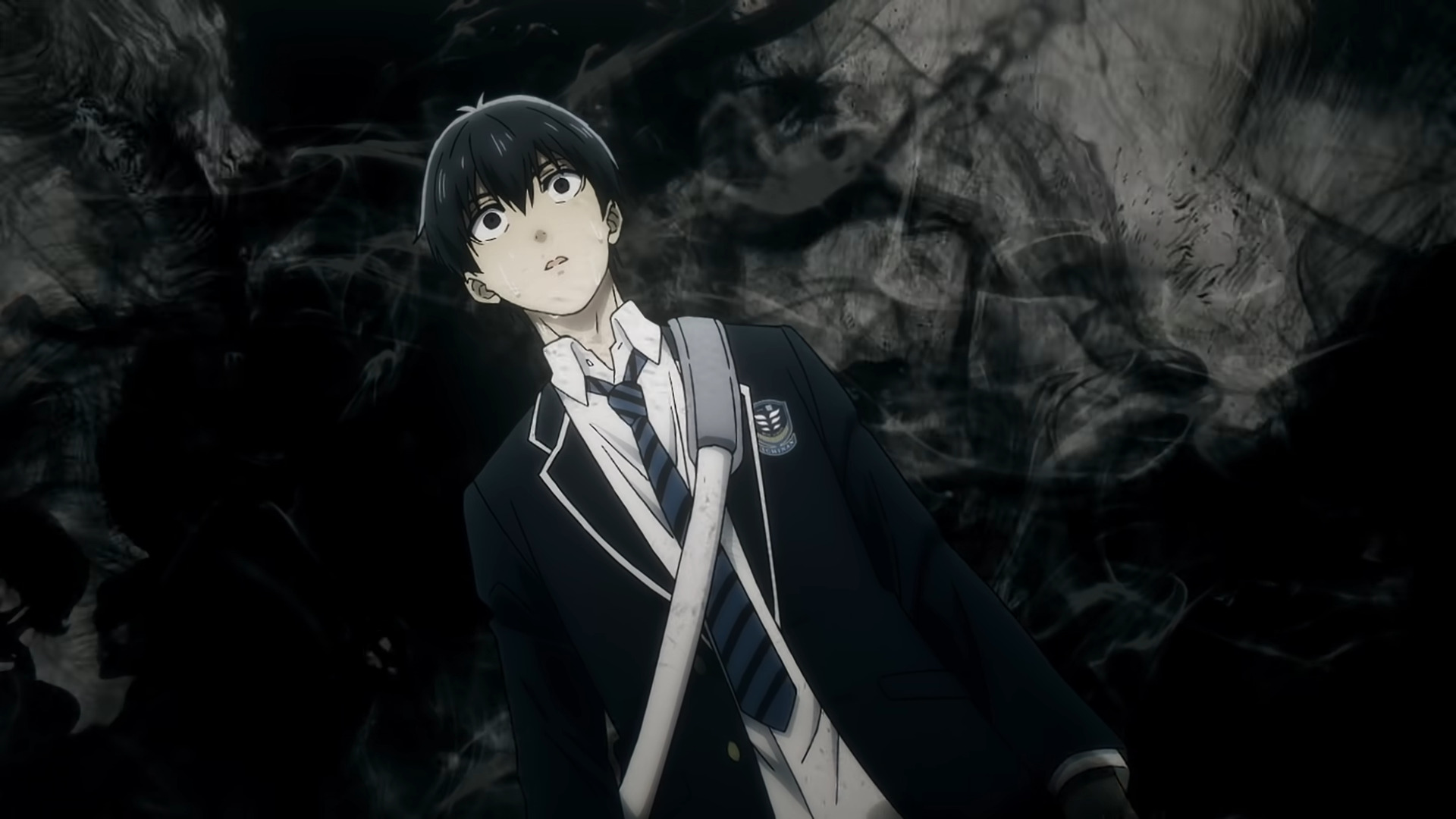 “Congratulations you unpolished lumps of talent,” says Ego. ” According to my personal judgement, the 300 of you are the best strikers under 18.”

“The birth of a revolutionary striker with the 300 of you here I will conduct an experiment to create the world’s best striker,” he explains. “The egoist that choose to gamble the nation’s hopes and the assurance of victory only those sorts of crazy egoists may proceed ahead into Blue Lock.” 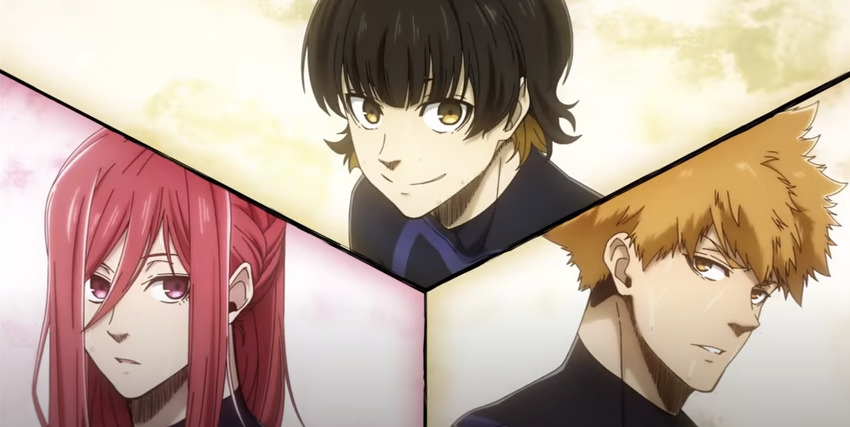 Following a few glimpses at Team Z’s training, the trailer draws to a close on Isagi who, after receiving a pass from Bachira during a make-or-break game, experiences his first spark of flow. 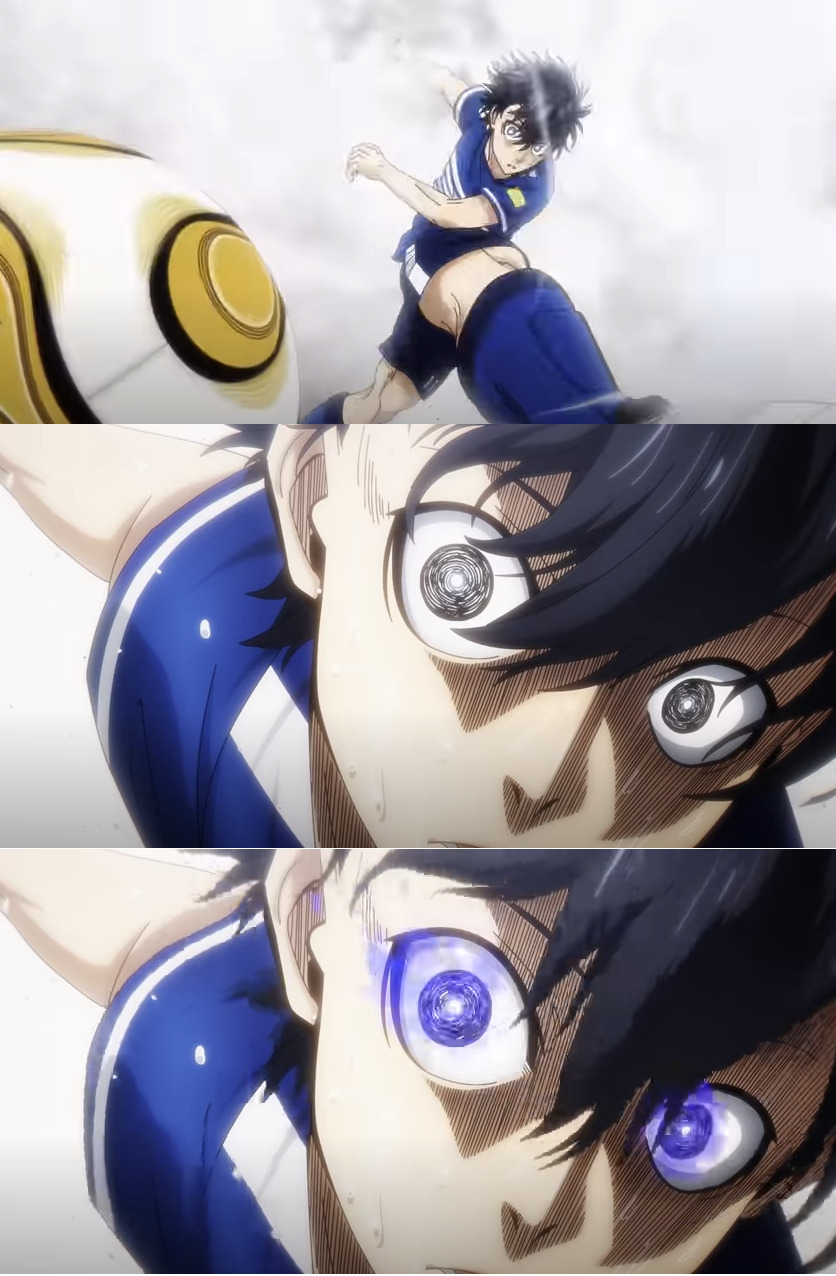 Are you excited for the Blue Lock anime adapatation? Let us know your thoughts on social media or in the comments down below!