The Batwoman Writers Room took to Twitter to declare that the now-cancelled Batwoman show on The CW should only be receiving positive feedback because it made “strides for representation for queer black women.” 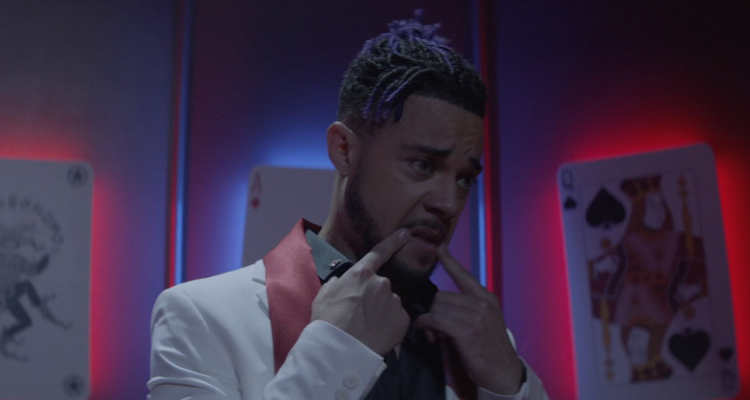 On May 23rd, the Batwoman Writers Room posted to the social media site, “Comments trying to detract and deflect from the impact, safety, representation, happiness, and hope that Batwoman brought black women can be seen to the door and left behind.” 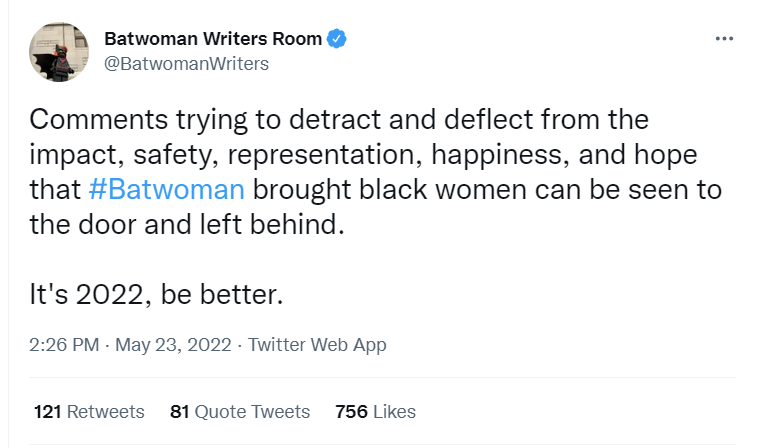 In a follow-up tweet they added, “Calling a show that made strides for representation for Queer Black Women anything but positive is an attempt to change the narrative. And it’s time we stop letting those who don’t matter have the stage.”

“Let the Black women have the floor,” they added. 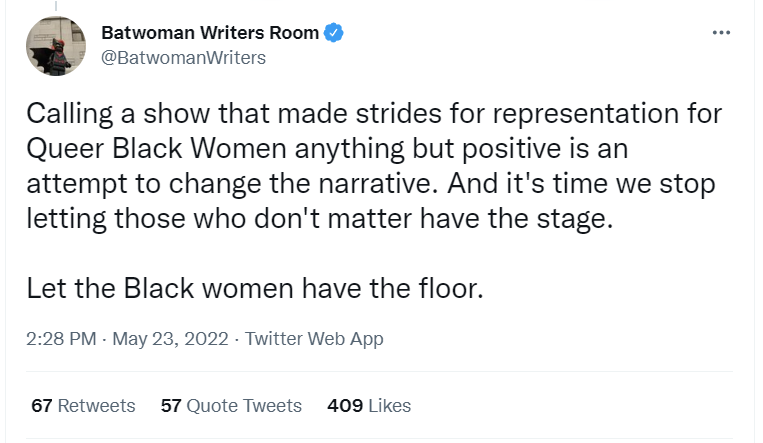 When one user replied, “We love you so much. They don’t deserve you,” the Batwoman Writers Room replied, “They don’t have me. Who has me are the black women who have continuously said that this show is important to them, more than I will ever know. And for that – I am not letting them sit by and handle the fight alone.” 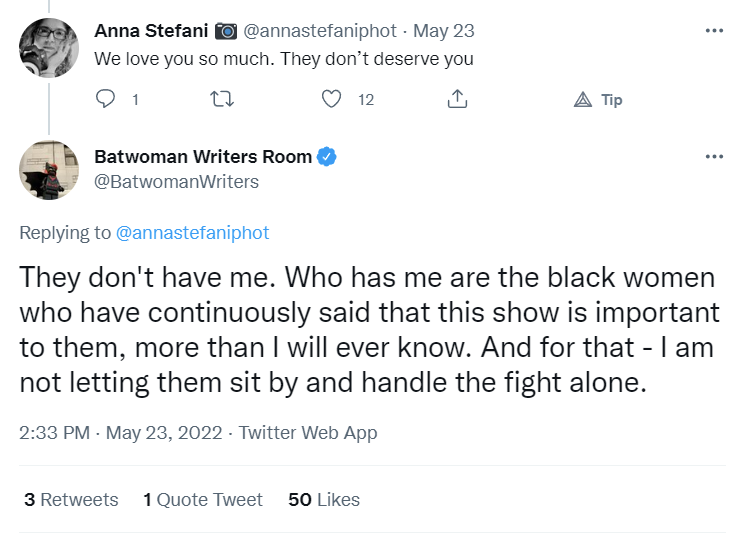 The account was subsequently roasted by Twitter users who called out the show who saw massive declines in viewership and ratings throughout its three seasons.

YouTuber HeelvsBabyface tweeted, “Your show was dog s**t. The stories were garbage. ‘Representation’ is no substitute to good story telling and to hide behind it shows your cowardice and inability to take any responsibility yourselves.”

He added, “You were lucky to get 3 seasons. You didn’t even deserve ONE.” 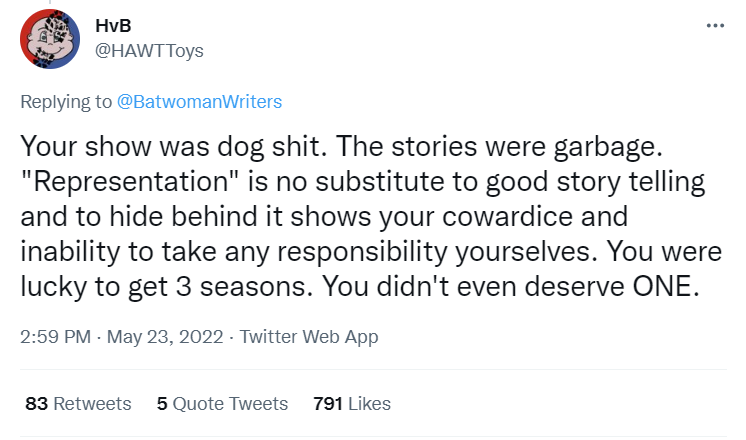 YouTuber Nina Infinity wrote, “You can have all the ‘representation’ you want. It will NEVER substitute for bad writing & S**T character.”

“In fact, you did your representation a disservice with your trash script. Why not giver her something to work with & be successful? The blame is on YOU,” she declared. 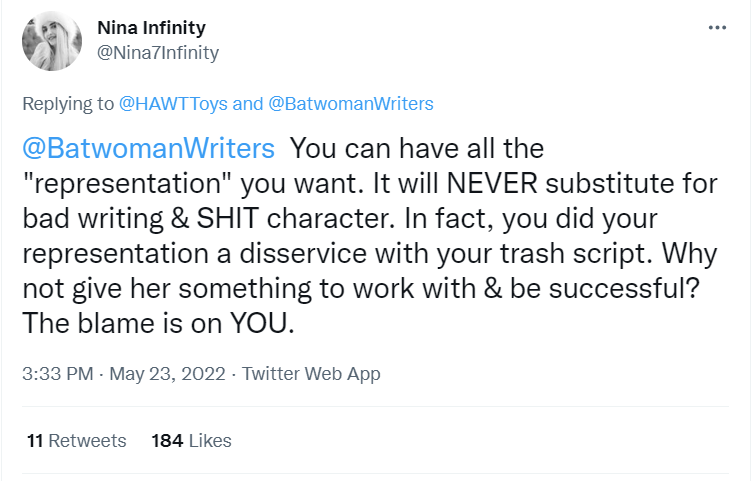 YouTuber Fat Steven Seagal tweeted, “Strides and Good Writing need to be coherent and respectable. Batwoman lacked both. Some of the lines and filming was horrednous, stereotyped disrespectably and agenda filled.”

He added, “Criticism of those points isn’t hate, abuse, or harassment it means the views saw flaws. Grow up.” 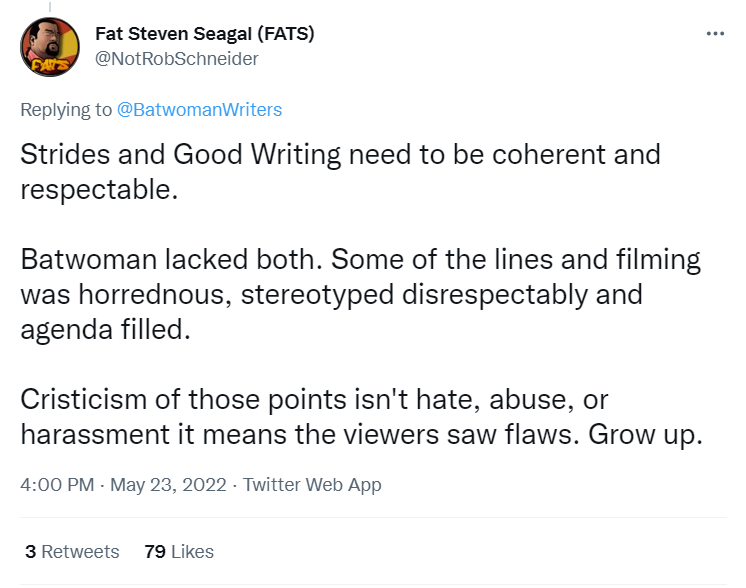 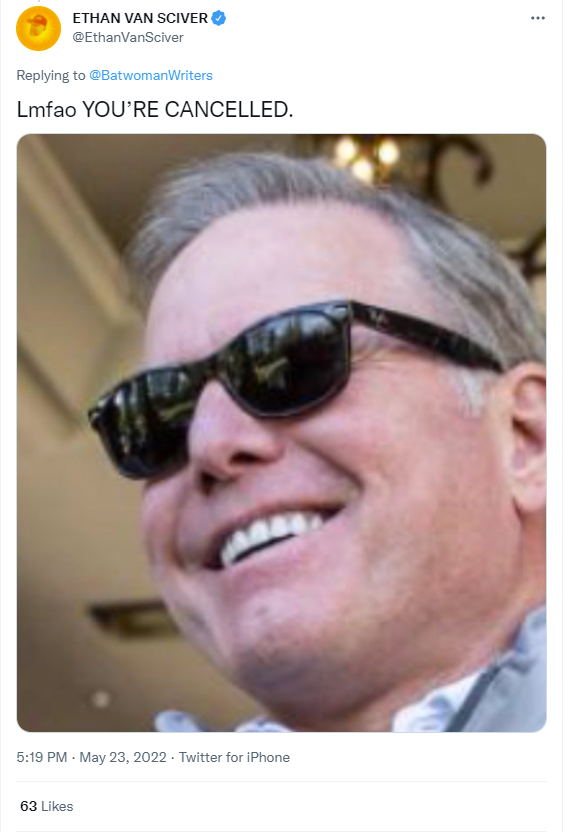 Twitter user ibramskyheart wrote, “Just because my dog’s s**t doesn’t smell for once – and I’m definitely thankful for that while I’m cleaning it up – doesn’t make it anything other than s**t.” 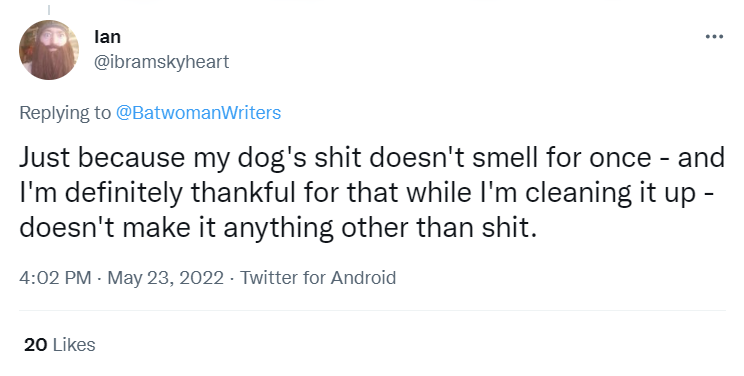 John A. Douglas wrote, “You had the floor and no one listened. We saw the ratings. You chose politics and divisiveness over good storytelling and in the end that is the bed you have chosen to sleep in.”

“The blame lies at your feet and no one else,” he concluded. 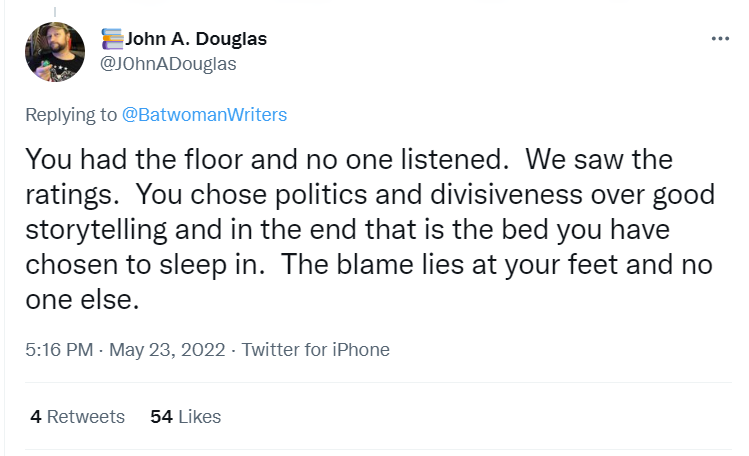 Twitter user FreddyGutierr16 wrote, “So you’re basically blaming everyone but you for not only making a terrible show but pretty much not taking any sort of responsibility since no one liked this show. Not even the people you tried pandering to.” 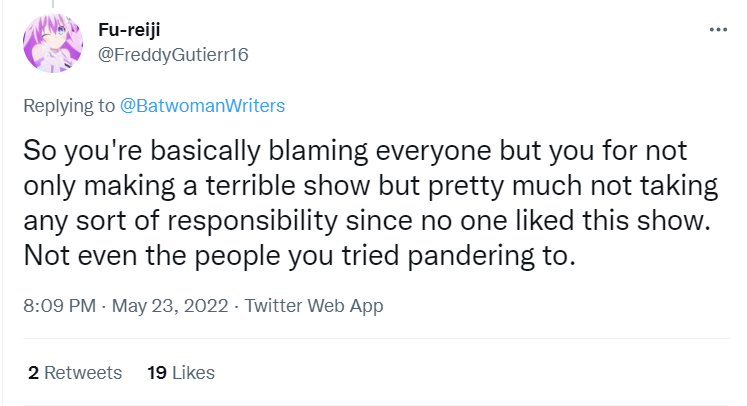 Twitter user KenobiStig wrote, “Get good writers next time. And stop using minorities as a shield to hide your lackluster effort behind.”

YouTuber La Reina Creole tweeted, “Your show was an unmitigated disaster. And an insult to black women who are victors and not victims. We deserved much better than those sloppily-written tokenized characters.”

“It should have been cancelled at the end of Season 2z,” she concluded. 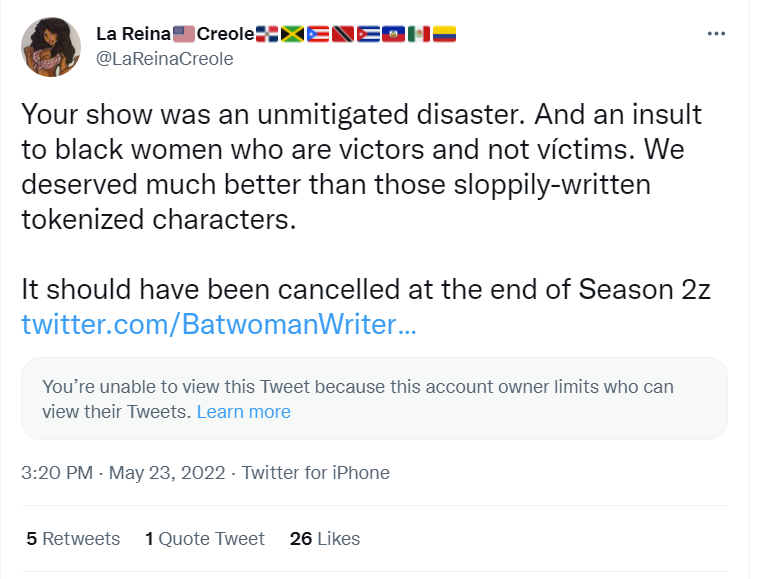 The show was cancelled after a failed “fan” campaign was launched by the writers room to try to keep it afloat. The show’s writer Caroline Dries announced at the end of April, ““Just got the sad news that Batwoman will not be seeing an S4. I am bummed, but full of gratitude.” 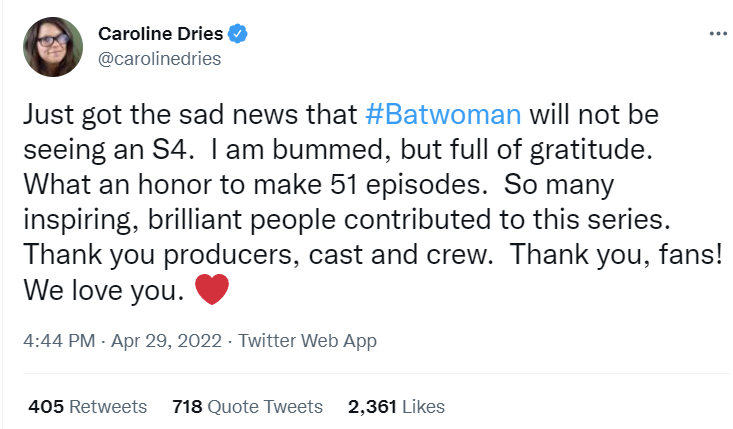 The show’s third and final season saw its average viewership clock in at 458,000 viewers per episode with the ratings in the 18-49 demographic averaging .09.

The third season also saw the show post the worst viewership of its entire run with the fifth episode only bringing in 372,000 viewers. The show’s series finale was also one of the least watched episodes in the show’s run only bringing in 415,000 viewers and posting a series worst .07 in the ratings. 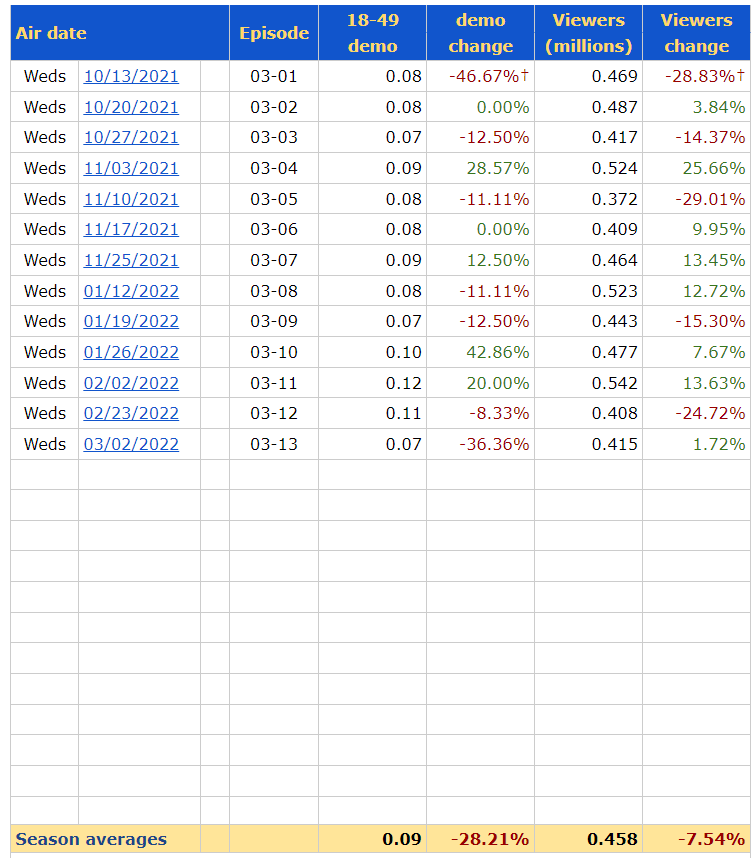 On top of the poor viewership and ratings, the show had an abysmal Audience Score on Rotten Tomatoes. The third season received a 33% from 15 users. 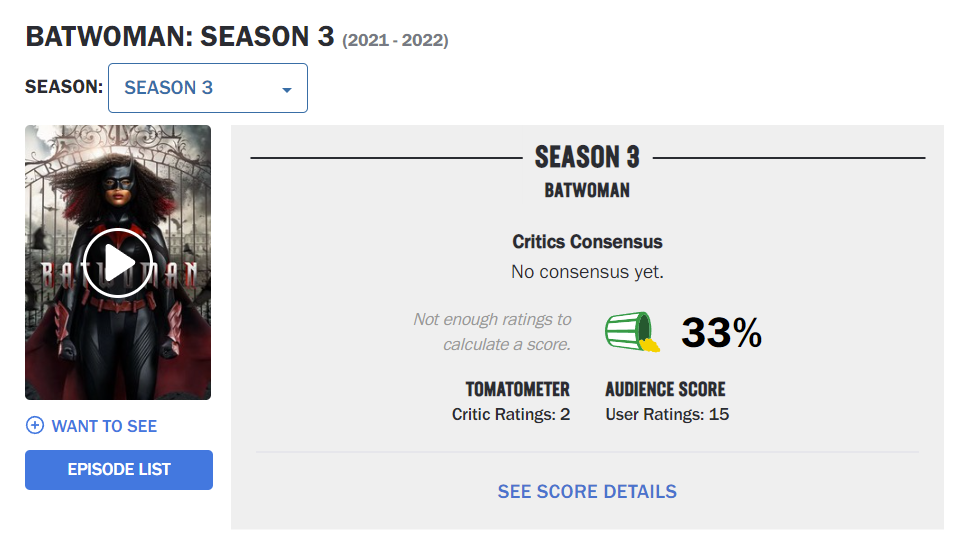 The show’s overall user score sits at an abysmal 23%.

What do you make of the responses to the Batwoman Writers Room? What about their original claim that the show should only receive positive feedback?

NEXT: CW Boss Mark Pedowitz Claims “Content Was Never A Factor” In Deciding To Cancel Shows Like Naomi And Batwoman