It only took 40 chapters, but after asking for an anime adaptation in the color page to her series’ 49st entry, the comedy queen of knees has officially had her wishes granted. 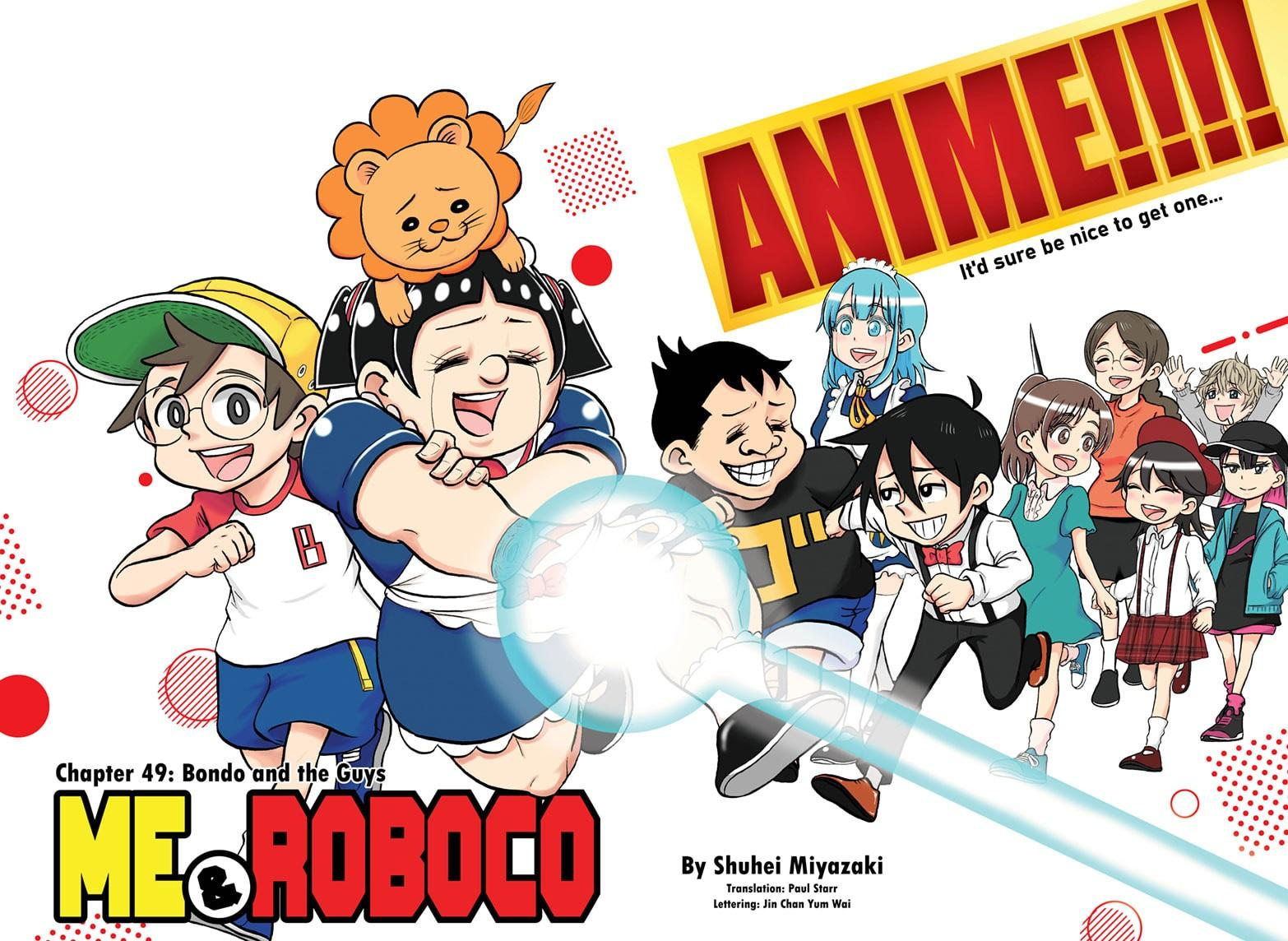 The official announcement that the series best described as the ‘South Park of manga’ would be receiving an anime adaptation came on May 29th in the 26th issue of Weekly Shonen Jump.

Revealing the news in a color page ahead of its 90th chapter, mangaka Shuhei Miyazaki excitedly declared, “Hooray! We’re getting animated!! No kidding! It’s true!” 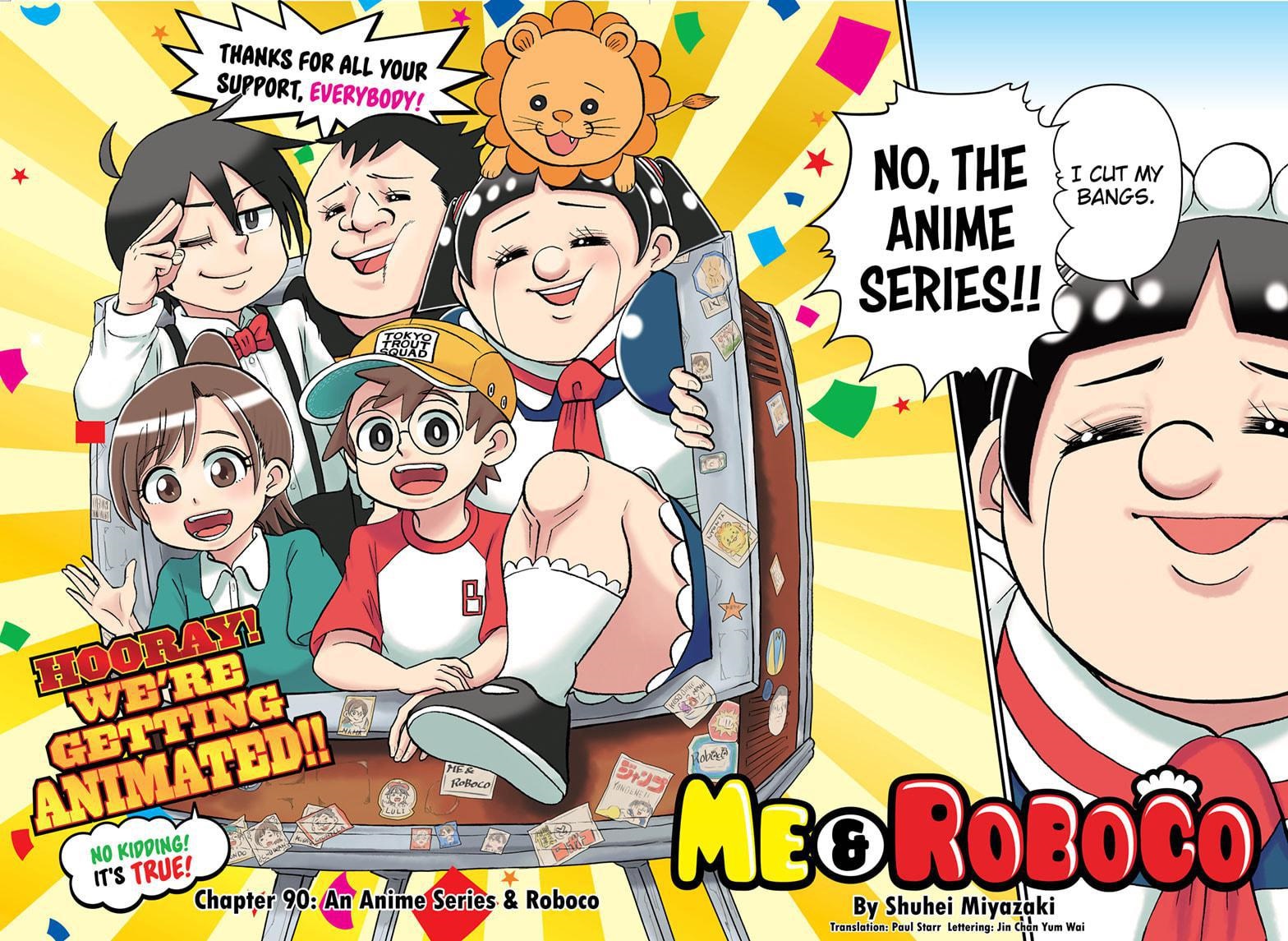 The mangaka himself also announced the news on Twitter through Roboco’s own ‘personal account’, telling fans, “It’s been decided that Me & Roboco will receive a TV animation! Thanks to everyone, Thank you very much, Thank you for your continued support.”

Staying true to herself ‘Roboco’ also included a number of humorous hashtags in the tweet, adding “#Me and Roboco #All knees long-awaited #TV animation #It’s not a lie, it’s true #Diffusion hope #RT hope #Seriously thankful shit thanks #Roboco animation #Hope to enter the trend #Everyone power to Ora”.

Starting it’s serialization in 2020, Me & Roboco is a comedic gag manga which pokes fun at the world, particularly Shueisha products.

As described by the publisher, “The year is 20XX… A time when every household owns cute maid robots known as OrderMaids. Average grade-schooler Bondo dreams of having his very own robot. But what he got was… Unable to compute!!!”

“Life is gonna get a whole lot weirder when Roboco, the most powerful clumsy maid ever created, shows up at his door!” they add.

In response to the announcement, several prominent mangaka offered their congratulations to Miyazaki, even some whose series Me & Roboco has poked fun at on multiple occasions. 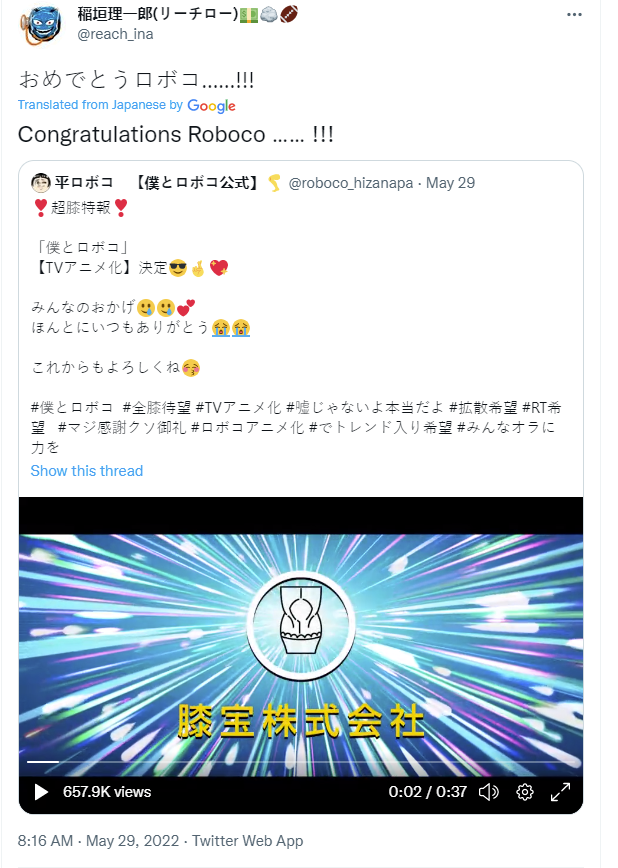 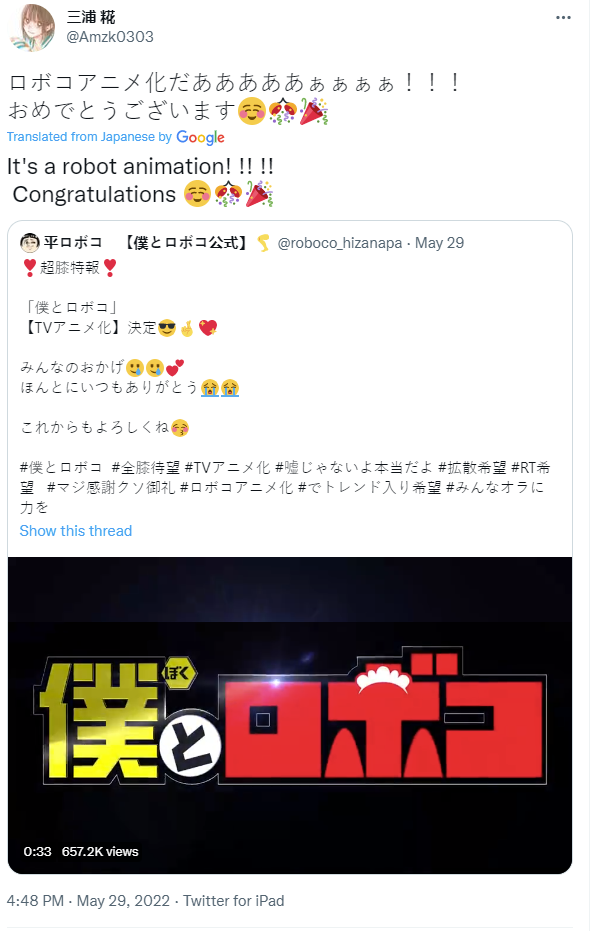 To Love Ru Darkness mangaka Kentaro Yabuki, whose recent series Ayakashi Triangle received its own anime announcet during the previously-held Jump Festa 2022, wrote, “Congratulations to Me & Roboco for the anime! I’m happy to be able to enter the anime world together as a synchronous serialized work (Aya Tora is also steadily underway).”

In honor of the announcement, the mangaka also “took on the challenge of drawing Akane Urahara, a girl I’ve been wanting to draw for a while,” providing a new sketch of Gorilla Gachi’s secret admirerer.

Mengo Yokoyari, the manga of the extremely popular manga Oshi no Ko and a huge fan of Me & Roboco, tweeted (via DeepL), “Oh s–t, Roboco is getting its 8th volume too! That’s a little too much! LOL (Congrats on the anime, Robo-chan!) 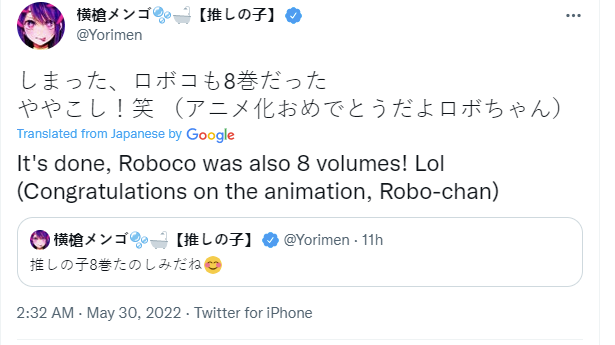 Notably, not only does Me & Roboco have an entire manga chapter dedicated to making fun of Yokoyari’s mystery drama series, but Miyazaki parodied the cover of Oshi no Ko’s first collected volume for the 8th volume of Me & Roboco. 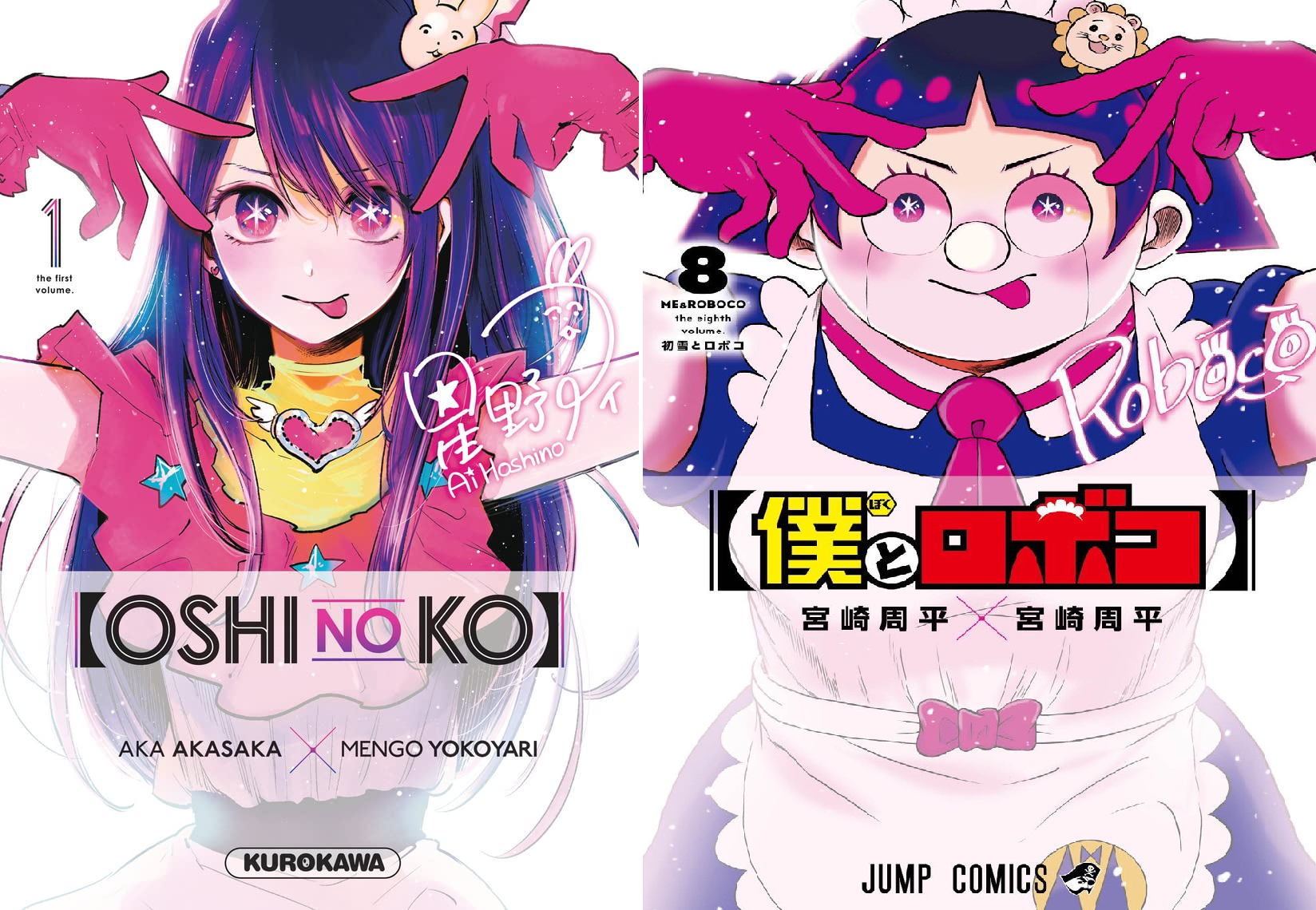 In response to all the love, Miyazaki tweeted (via DeepL), “This week’s Me & Roboco had an unexpected cover and color page. The most beautiful appearance of a lifetime! Check out the magazine!”

“And I’ve received so many warm congratulatory comments and many more!” he added. “Thank you from the bottom of my heart. All thanks to all of you.”

In typical Me & Roboco fashion, Miyazaki used the series’ 90th chapter to not only announce the anime’s production, but also take digs at anime censorship – specifically its popular and demand among certain sects of Twitter.

For example, during a discussion of their upcoming adaptation with Bondo, Roboco warns, “Anyway this is an anime series we’re talking about you need to be very careful about how you act master.”

“If you do something problematic and it gets out, our anime series could get cancelled.” she continues. “Let’s just do a plot where we stay quietly in the house until the anime airs. Plus my knees are probably too intense so I’ll go blur them out.” 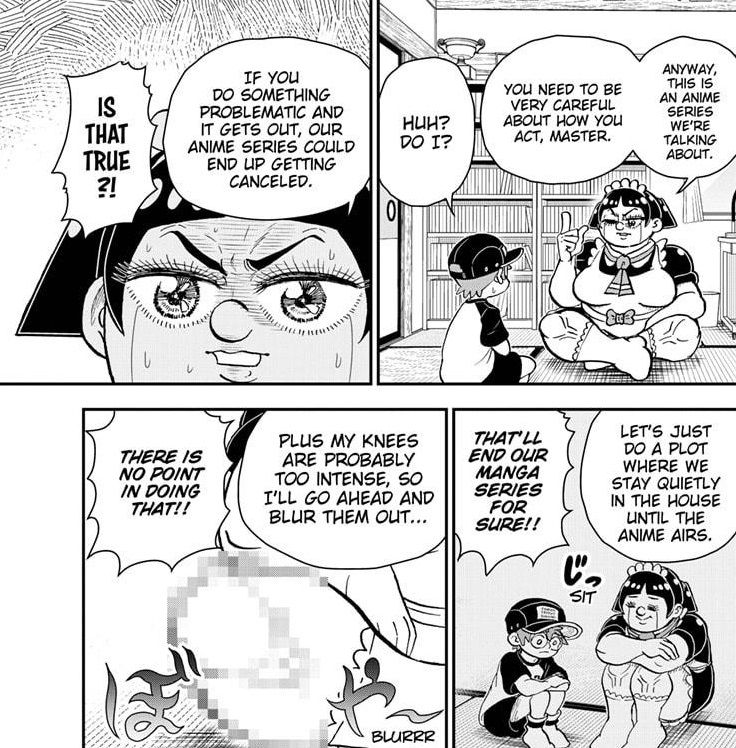 Immediately after, Miyazaki sets up a jab at feminists who take issue with big breasts in anime and manga, as Roboco reveals that she’s changed her appearance in order “to get a hot bod to make sure we pull plenty of male viewers.”

“Well, my chest is huge now, after all,” she adds. “The gentlemen will love it, just you watch.” 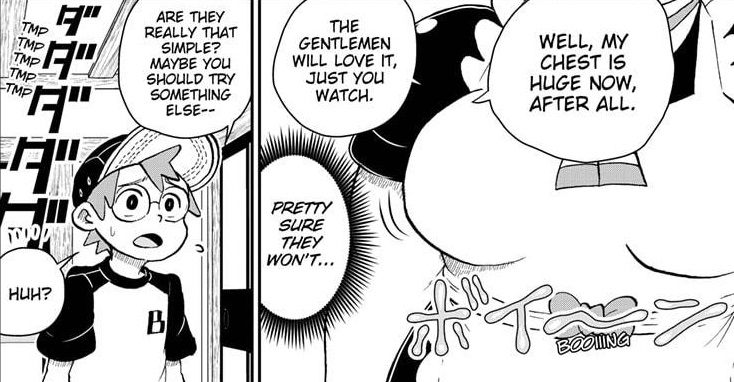 Right on cue, Bondo’s mom gives form to such feminist complaints, bursting into the room and declaring “I sensed something sexy in here!! I told you, no Darkness!!” – another instance of one of the series’ running gags, which sees her reference Saki Hasemi and Kentaro Yabuki’s boundary-pushing ecchi manga To Love Ru Darkness whenever she even suspects her son of doing something perverted.

“Regulatory compliance!” she further yells. ” Business process outsourcing! If we’re getting an anime series, I can’t let even a little bit of Darkness slip through.” 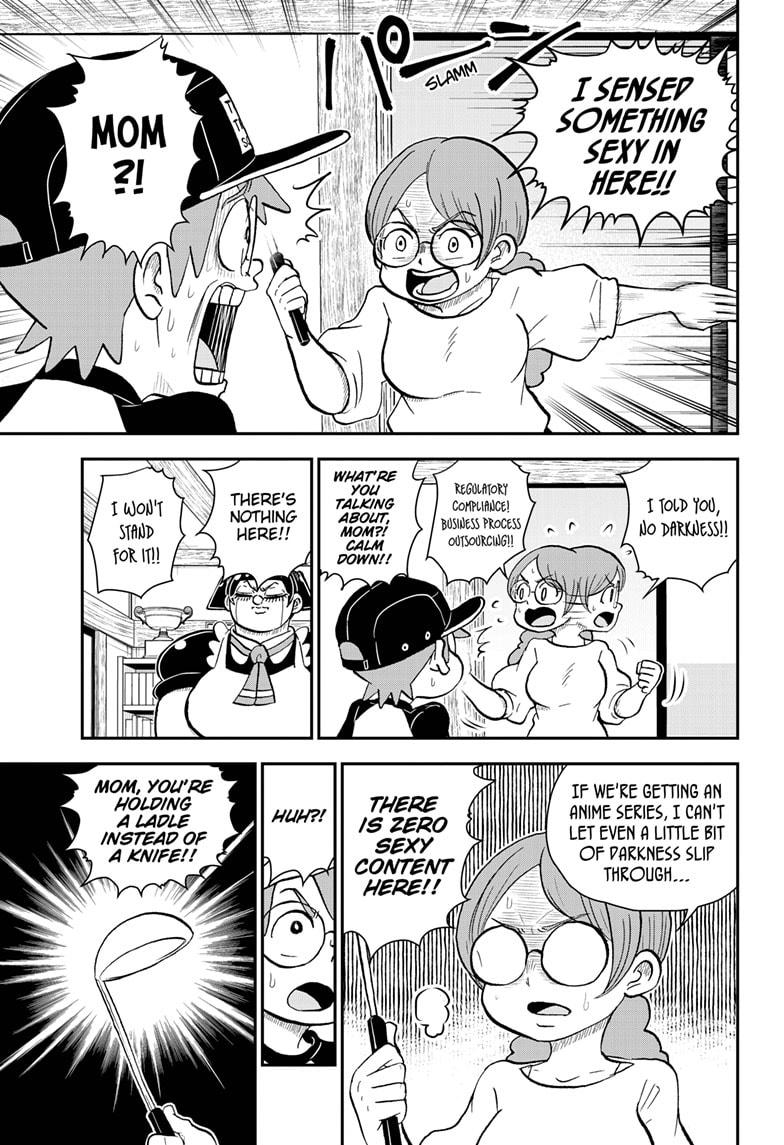 Taking another shot at censorship, Bondo asks his mom why she’s is holding a ladle rather than her usual kitchen knife.

“You really think they can broadcast me holding a knife?” she asks her son, as Roboco moves to use her censor beam to “it out just in case.” 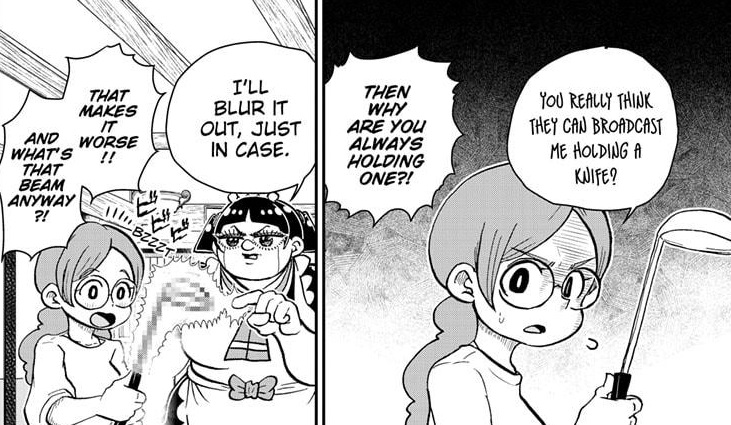 Expecting Bondo’s two best friends, Gorilla Gachi and Motsuo, to soon arrive and ‘bully’ her master – another running series gag, this one which sees the pair’s supposed bullying always revealed to be motivated out of love and care for their friend – Roboco asserts, “Those two bullying you absolutely cannot end up being broadcast.”

Despite Bondo pointing out that “it always turns out that they’re great guys,” Roboco procceds to “just redact their lines.” As pointed out by her master, doing this usually makes the ‘offensive’ dialogue seem even worse. 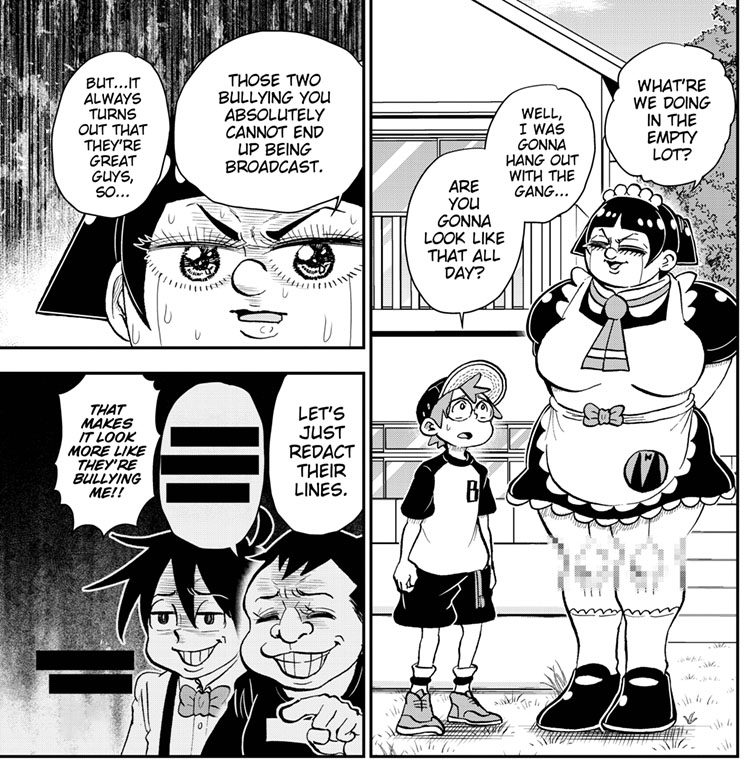 Unsurprisingly, despite the lighthearted nature of the series and its announcement, the Me & Roboco anime adaptation has still managed to inspire controversy among some pockets of Western manga fans, particularly those with a feverish preference for action shonen series.

In the opinion of these fans, Me & Roboco is undeserving of anime adaptation before such community favorites as Mashle: Muscles and Magic, Dandadan, and even the cancelled The Hunter’s Guild: Red Hood.

Adding salt to their wounds, the same day as the Me & Roboco anime announcement, fan favorite action-shonen Ayashimon was canceled. 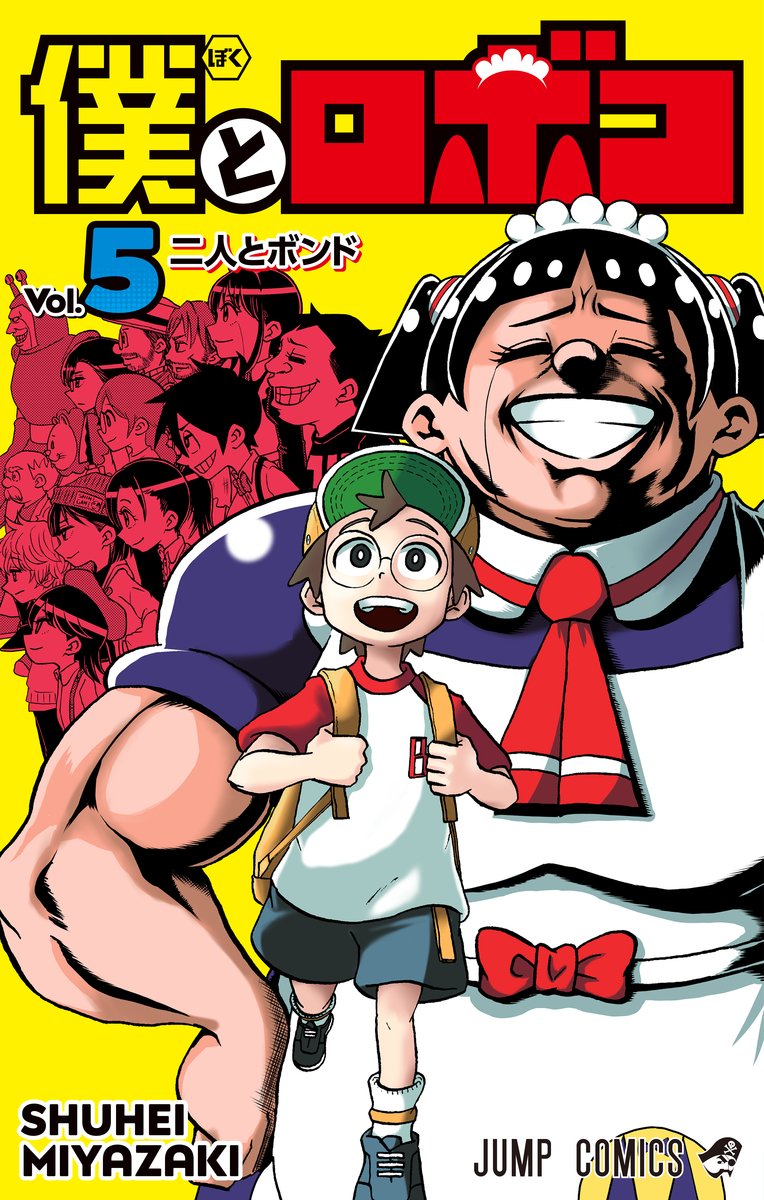 Are you excited for the Me & Roboco anime adaptation? Let us know your thoughts on social media or in the comments down below!