YouTubers Jeremy “TheQuartering” Hambly and Tim Pool were both reportedly subject to separate but related SWATting attempts on Tuesday night, with the former alleging that he was even handcuffed and thrown to the ground by responding officers.

Occurring on the evening of June 9th, the first of the two false SWAT calls was leveled towards Pool during his hosting of his show, Timcast IRL.

As seen live on YouTube, roughly an hour and twenty minutes into the episode two assumed members of Pool’s staff entered his studio to inform him, fellow hosts Ian Crossland, Luke Rudkowski, and Lydia Leitermann, as well as that night’s special guest, Virginia-based U.S. Congressional hopeful Tommy Altman, that they had to “evacuate the building”.

Though many were left confused by Pool and company’s abrupt exit, unbeknownst to many was the fact that a short while later, Hambly was also on the receiving end of a false SWAT call.

Approximately two hours after Pool’s evacuation, Hambly took to Twitter to report, “Swat team just left my house. Someone texted them that I murdered my wife with a ‘high power rifle’ and was going to kill myself. They deployed the SWAT team for an anonymous text. They all KNEW it was a SWAT too. Hilarious.”

“100% dead serious,” he assured his followers. “You’ll be able to listen to the radio calls online but no f—ing body cams. Total bummer.”

In response to fellow Twitter user @PimpMasterTYoda1 joking that he should have given “all the nice officers some free coffee for having to go out to your house,” a reference to the YouTuber’s recent coffee-bean retail endeavors, Hambly asserted “No” before proceeding to recall a particular detail about the SWAT team’s handling of the call.

“I supposedly murdered my wife,” he explained. “The cops were sitting in my driveway when dispatch called me. MY F—ING WIFE ANSWERED THE PHONE.”

“They should of stood down at that moment,” he stated. “Not handcuff me and make me lay in the wet grass and scare the shit out of my wife” 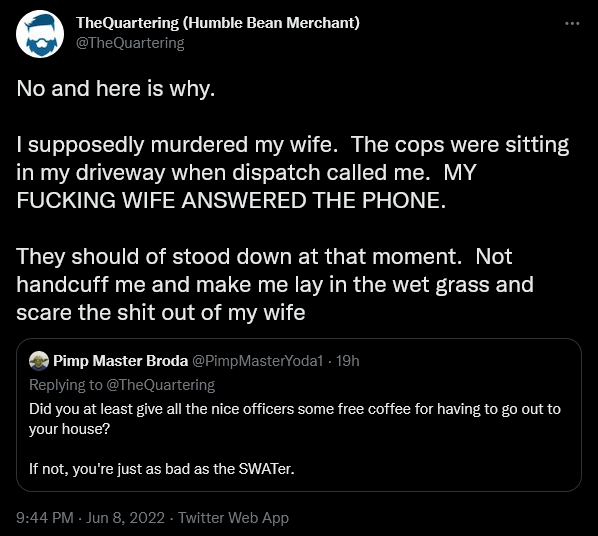 “Again…All this for an anonymous TEXT MESSAGE not from me,” Hambly criticized. “I am also on the local ‘do not swat’ list and have been for years.”

Addressing those concerned for his and his wife’s safety, Hambly then assured, “We’re 100% fine. Cops were cool after they realized I wasn’t a murderer but they crossed a few lines in my opinion.”

“Especially continuing to cuff my wife, who was supposed to be the victim of my murder,” he said. “We had a good laugh and I have updated their ‘do not swat list’ people.” 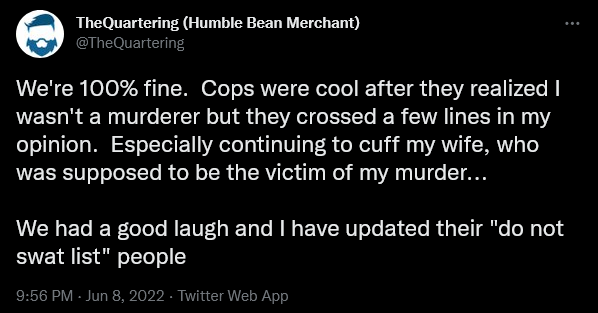 Following up his initial tweets, Hambly later joked, “The bad news: No body cams so my video on it will be weak. The good news: the entire internet wont see my hairy ass crack spread out in the lawn. I’d say it’s a wash”. 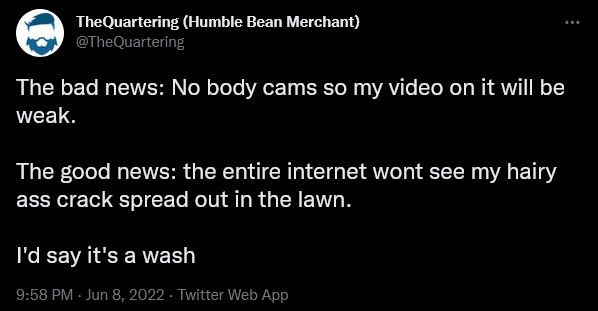 Though the YouTuber was unsure as to the exact reasons for the SWATting attempting on his persons, Hambly theorized to a fan, “I am certain my swatting was due to the large amount of super chats I was sending him.” 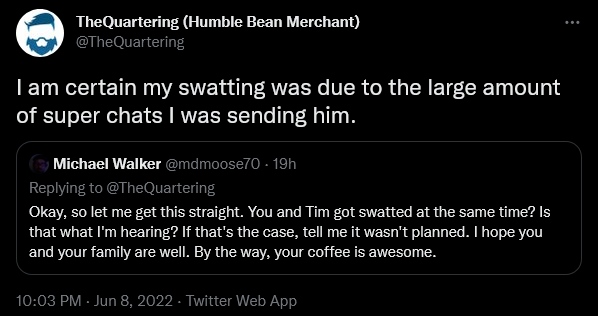 “Yes, of course it was the same people,” he further asserted. “I assume they were mad about all the super chats. It’s okay. :)” 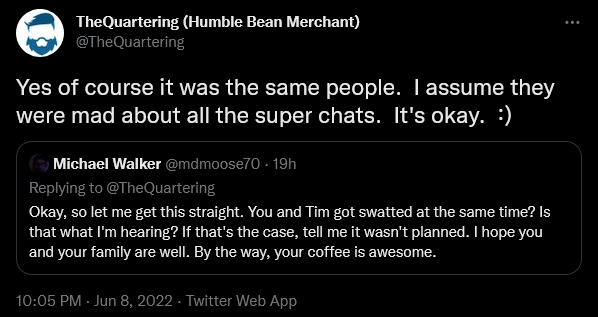 In the aftermath, TheQuartering shared an image of the scene outside his house taken via his home security system, noting that the police presence seen was “only a fraction of the response”. 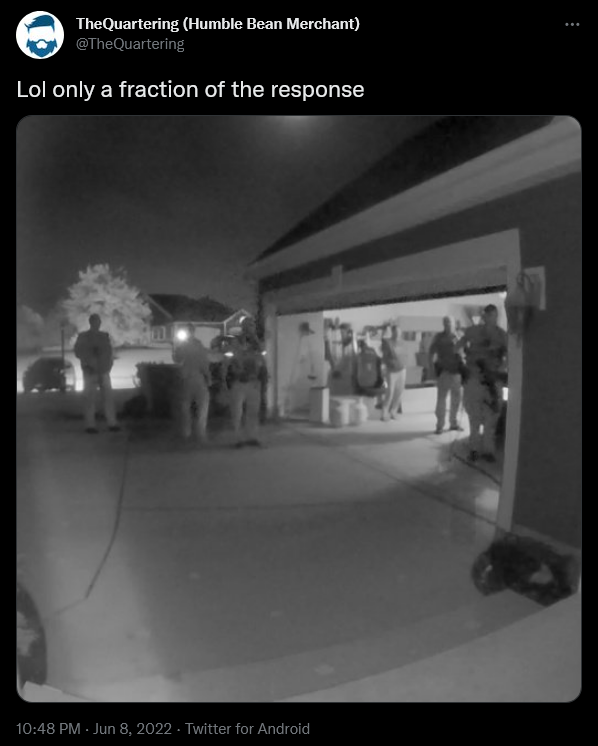 The next day, Hambly announced that he was seeking to formally escalate his complaints regarding the SWAT team’s response, tweeting, “Just got out of my meeting with lawyer (Half-Asian Superlayer Bill Richmond) We will be issuing some….words Friday. That said, I believe that law enforcement acted mostly the best they could given the information they had. I have some critiques but those will come from Bill”. 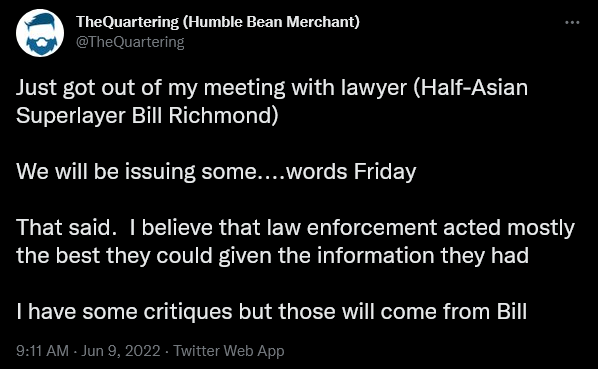 “There are some major SOP’s that need to be updated and I believe this law around Exigent circumstances is being abused to enter peoples homes,” he noted. “But again, I support our police. They were kind to my dogs & thankfully something bad didn’t happen. More Friday.” 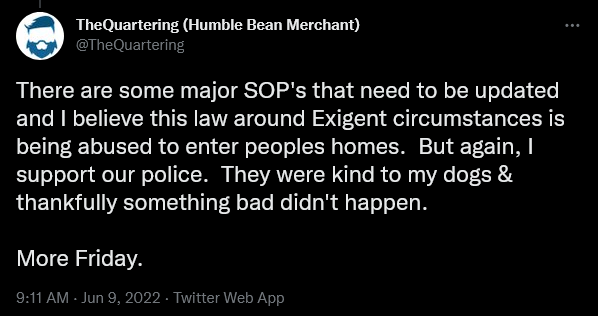 SWATting has seen a dramatic increase in recent months, with more and more individuals turning to the dangerous tactic as a means to respond to disagreements and silence opponents of any and all stripes.

In fact, prior to this event, Pool told conservative commentator Candace Owens that he had been swatted at least eight times in 2022 alone.

The use of SWATting hasn’t been limited to one or two internet communities either, as notable figures recently subjected to a respective false SWAT call range from the political America First founder Nick Fuentes to legal commentator Nick Rekieta.

Of course, as noted above, SWATing content creators isn’t a new phenomenon. In 2017, Peter Simeti was subject to a false call while hosting a promotional livestream for his independent comic book imprint, Alterna Comics.

In this incident police not only entered his home, but also drew guns on him.

This is also far from the first time that Hambly’s physical safety has come under threat by an individual who disagreed with him.

At the onset of his YouTube career, Hambly exclusively covered news related to Magic: The Gathering. However, during this time the game’s publisher, Wizards of the Coast, responded to complaints towards Hambly’s criticism by not only banning him from their in-person events, but also stripping him of ability to play online.

This public disavowment of Hambly’s opinions led to several personal attacks upon his character from across the board gaming industry, all of which eventually culminated in his being physically assaulted by board game creator Matt Loter during GenCon 2018.

Following the filing of a lawsuit against him by Hambly, Loter and the YouTuber ultimately settled the case out-of-court, with the former issuing a formal apology as part of the agreement.

However, despite this incident, Loter, going by his middle name Fantastic, currently sits on the board of the Game Manufacturers Association (GAMA), one of the industry’s largest trade organizations and whose team is responsible for coordinating major gaming events across the country.

Bounding Into Comics has inquired with GAMA as to why someone with a history of assaulting others at industry conventions remains on their board, but as of writing, a response has not been provided.

Most people roundly condemn such attacks, as living under constant threat of police violence is not only physically dangerous to content creators, but also an assault upon freedom of speech.

If YouTubers cannot speak freely about law, culture, politics, or even comic books out of fear for their physical safety, our entire society and public discourse will be irrevocably harmed.

What do you think about The Quartering and Tim Pool being SWATted? Leave a comment down below so we can hear your opinion!

NEXT: Jon Del Arroz Promises To Sue The Game Manufacturers Association After They Suspend Him For “Hate Speech And Bullying”