After sexist comments made by the streamer while playing Valorant came to light, YouTuber IShowSpeed has been banned from playing any and all Riot Games. 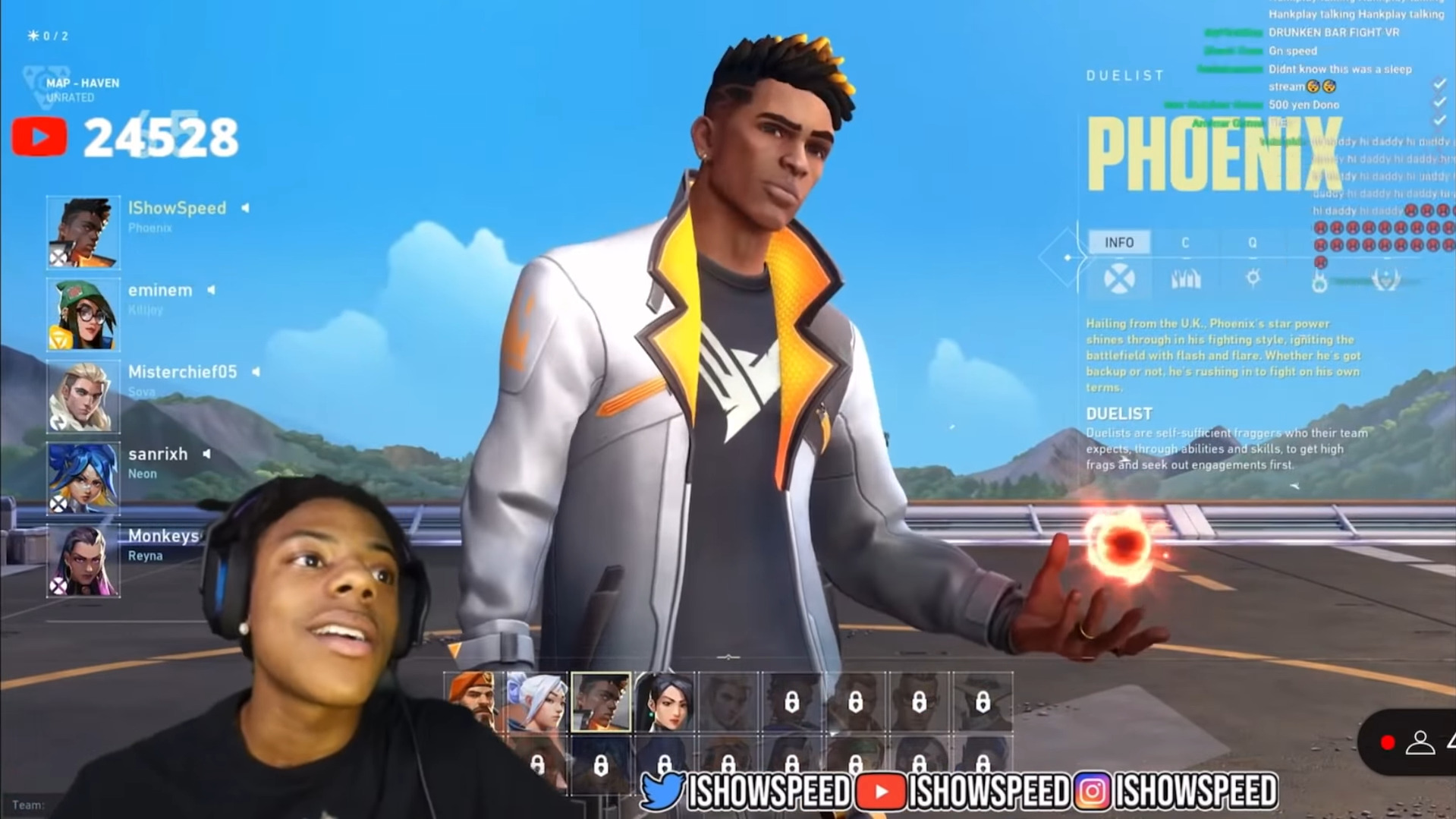 Darren “IShowSpeed” Watkins Jr. gained infamy for his on-stream actions on April 6th when a clip of the streamer began to make the rounds on social media, courtesy of Full Squad Gaming co-owner Jake Lucky.

“I now understand why Valorant queues are so unbelievably toxic,” Lucky commented. “You got one of the most popular streamers on YouTuber IShowSpeed saying crap like this and getting nothing but praise and laughs. Crap is whack.”

I now understand why Valorant queues are so unbelievably toxic. You got one of the most popular streamers on YouTube IShowSpeed saying crap like this and getting nothing but praise and laughs. Crap is whack pic.twitter.com/grEghVotUF

As seen in the clip, in response to Speed’s frustration over being killed by a player hiding around a corner, a fellow player asserted, “Man, you gotta hit your shots”

In return, the 19-year old streamer exclaimed, “Man shut your stupid ass up n*gga! What you talkin’ to bruh? Shut yo nerd ass up bro!”

“I know to play this game shut up! Monkey!” Speed continued to rant over his teammates. “Shut your b*tch *ss up! A’ight? A’IGHT?! A’IGHT?!” 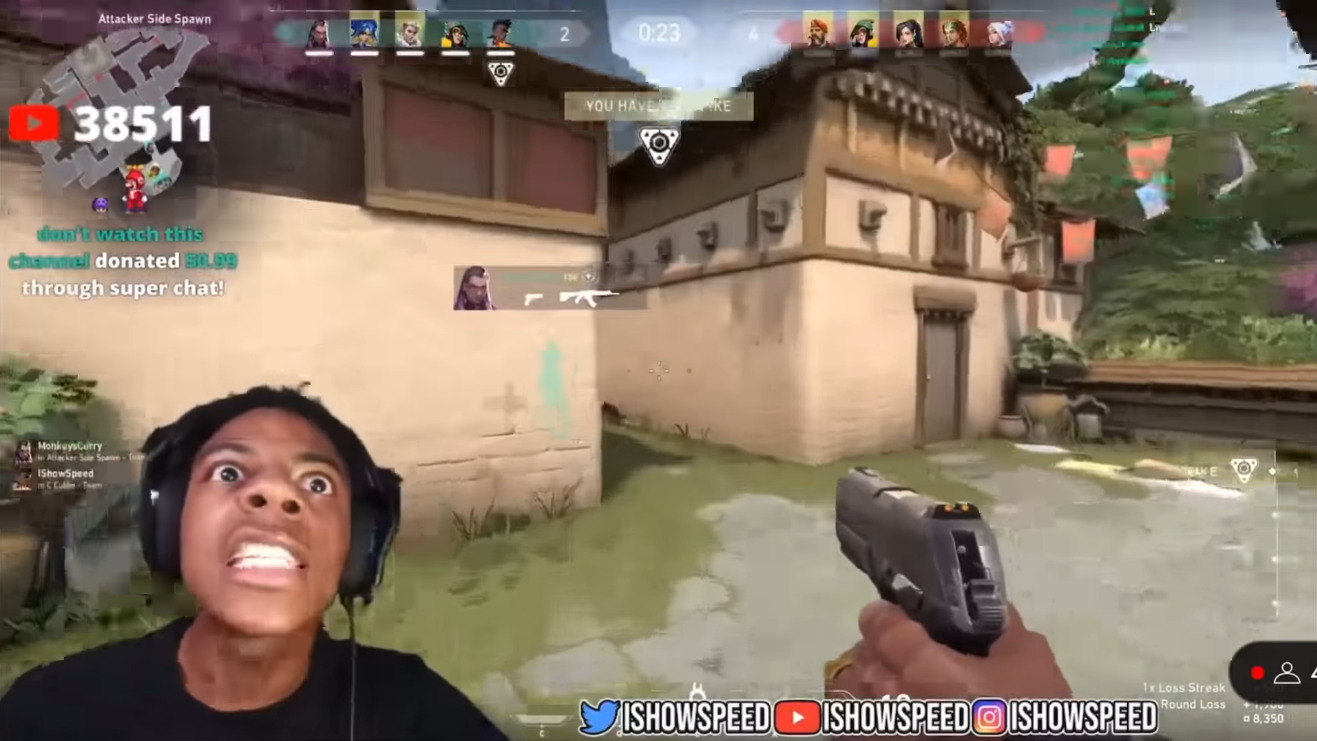 As other players ask him to calm down, Speed only grows further agitated, before yelling “Dayum shut up bruh, I know how to play this game, I’m not a noob a’ight?!

In response to at least two female teammates retorting that he “obviously” doesn’t, Speed let loose a tirade of rage, hollering, “What?! What, b*tch?! B*tch?! Is a b*tch talking to me?! Is a female talking to me?!” while wildly twisting his head from side to side. 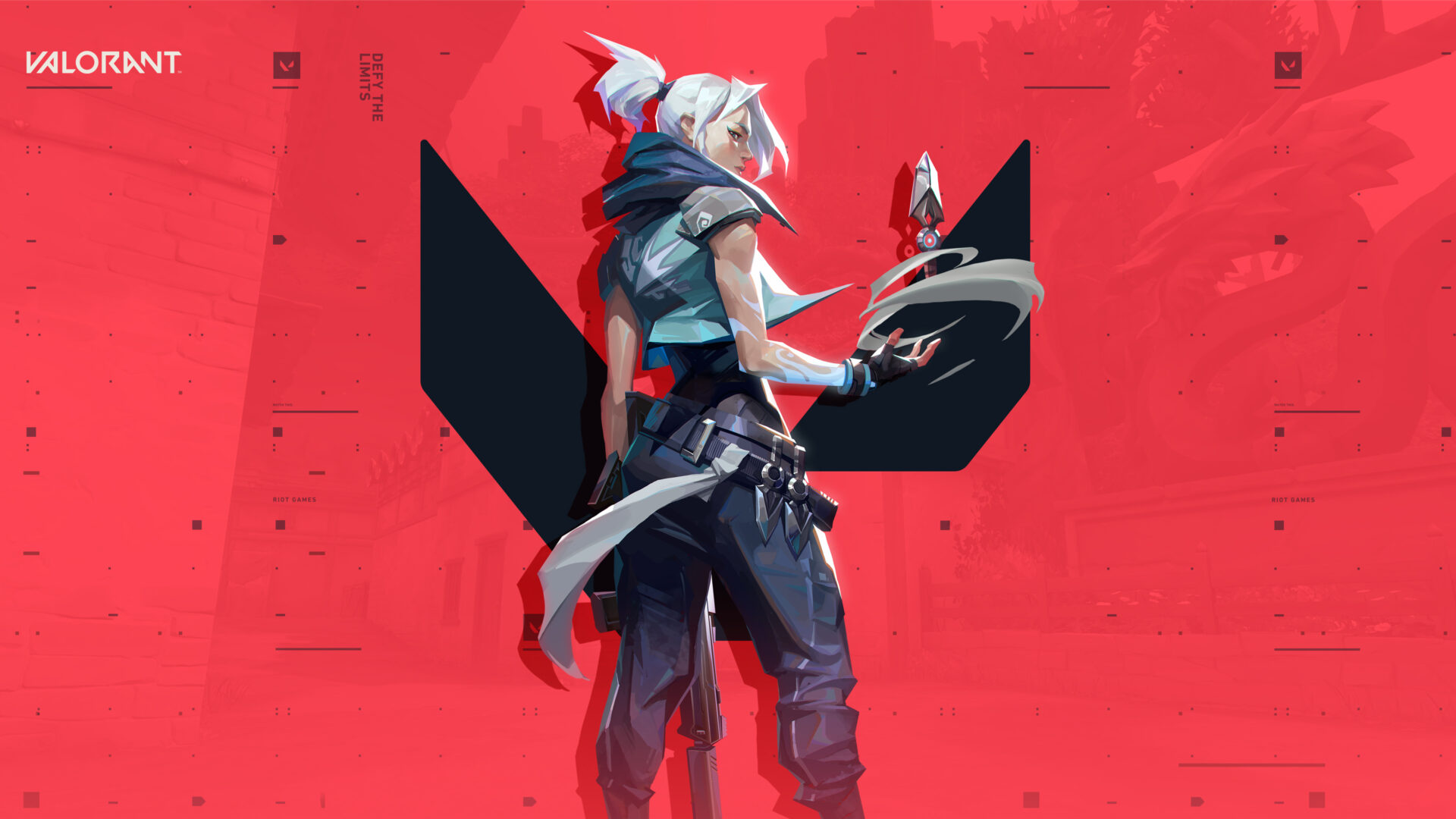 Speed further lost his composure when one of his teammates, playing the female hero Neon, shot him, prompting him to roar, “Get off the f**king game, and do your husband’s dishes b***h! Shut up!! F**k you!!” 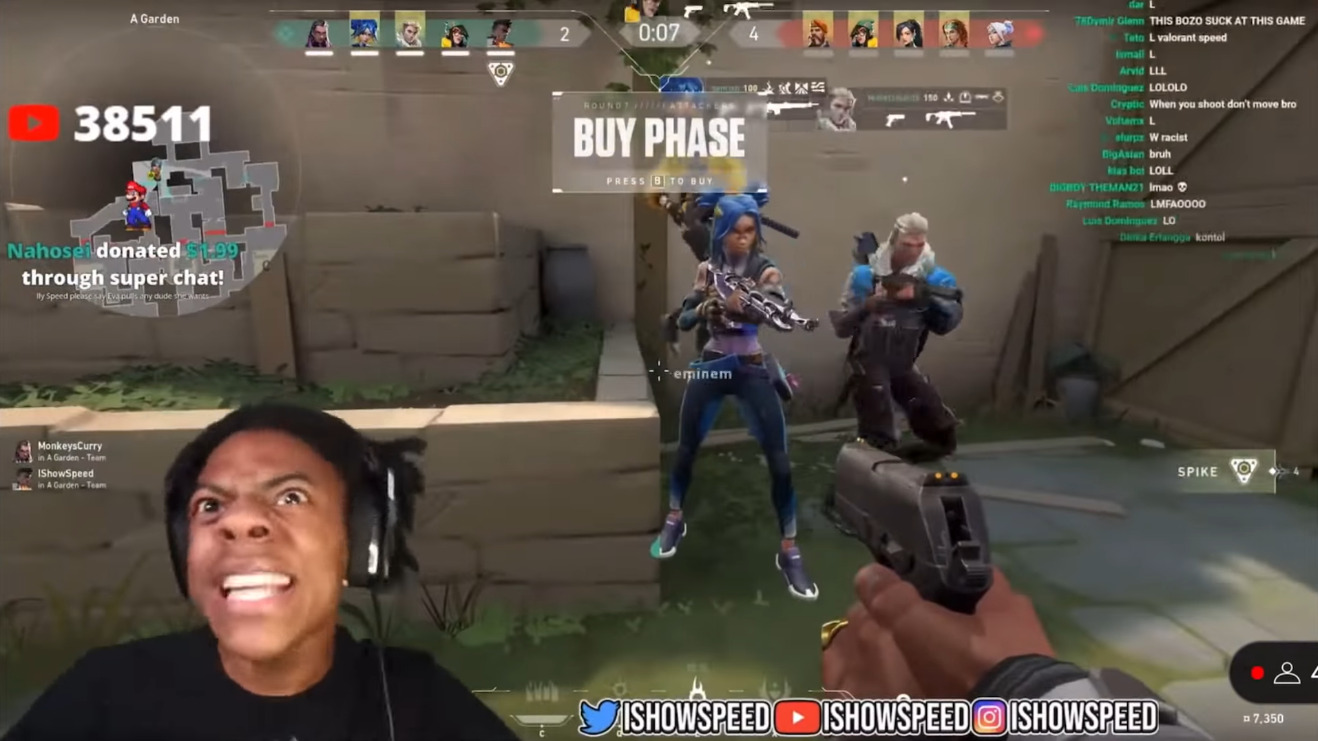 Getting killed by another player, Speed further ranted, “F**king nerds on my f*cking team. Like b***h who the f**k are you talkin’ to b***h?!” 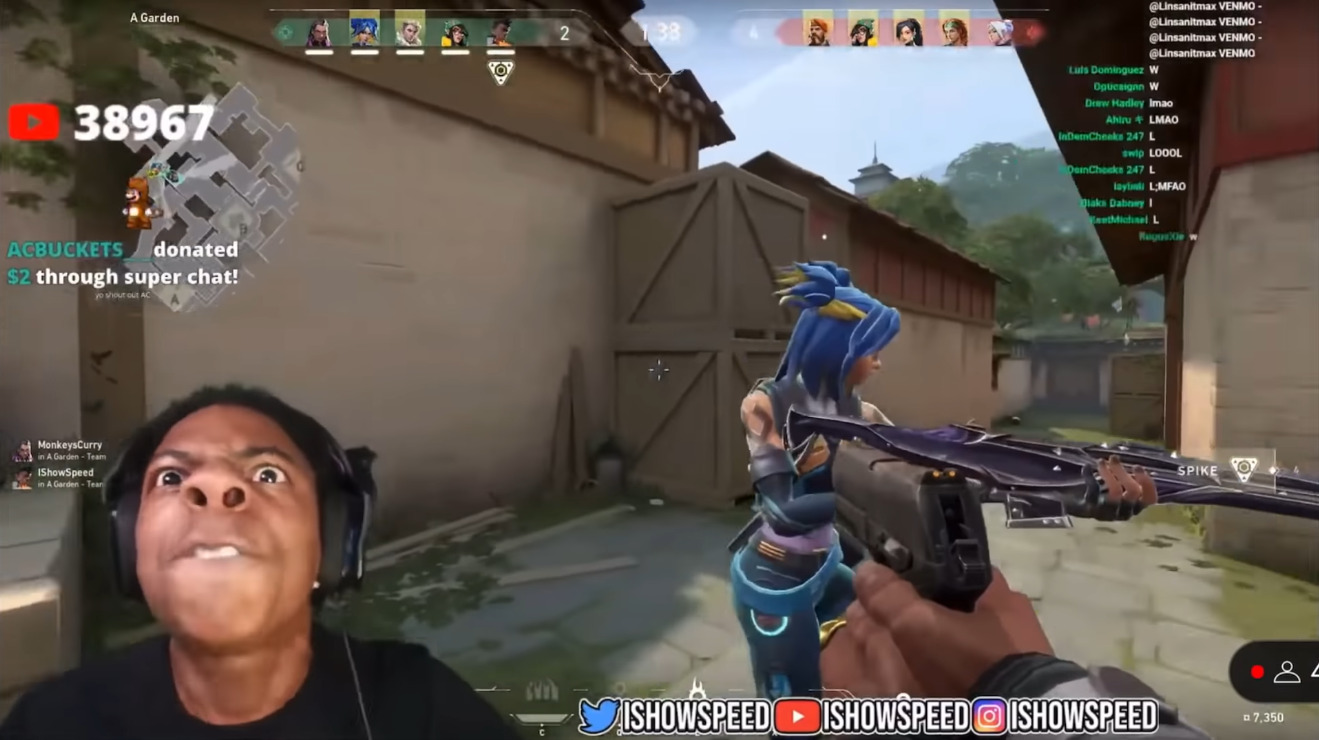 Lucky’s sharing of the clip would eventually prompt a response from YouTube Head of Global Gaming Creators Lester Chen, who simply asserted “On it.”

However, as of writing, it’s unclear what Chen meant by this declaration, nor what actions – if any – he subsequently took.

Later that same day, Speed would himself offer a direct apology for his outburst to Lucky, Chen, and the Valorant player base in general.

“What’s good everybody?” he opened. “It’s the clip that I’ve seen that’s going crazy right now. Between- an altercation with a girl when I was playing Valorant. I wanna say something, a few things from that situation.”

“That day, I wasn’t having a good day,” he claimed, “there had been a lot of racist ‘take-this’ speech, no nation is a lotta people y’know- talking about my dead Aunt, that isn’t great right now.”

“But look, I don’t wanna make that no excuse, I’m wrong, I’m not trying to justify,” Speed relented. “I’m just saying, that day I don’t bash with people for no reason. That’s where I’m coming from with that statement.” 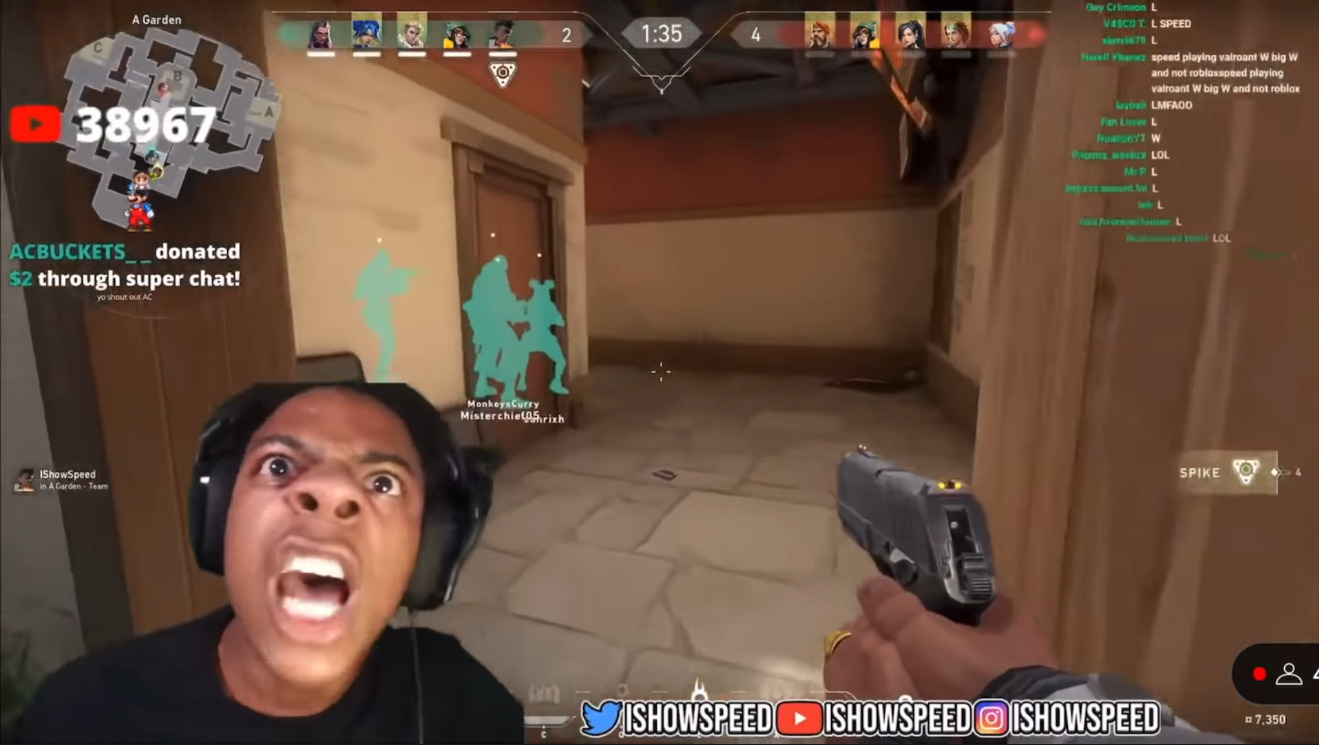 “I’m young, you know what I’m saying?” Speed asked. “I’m very young. Every situation I grow, and I change, and I gotta become a better person. That is not me no more, and I grew from that situation, and that comes from the bottom of my heart.” 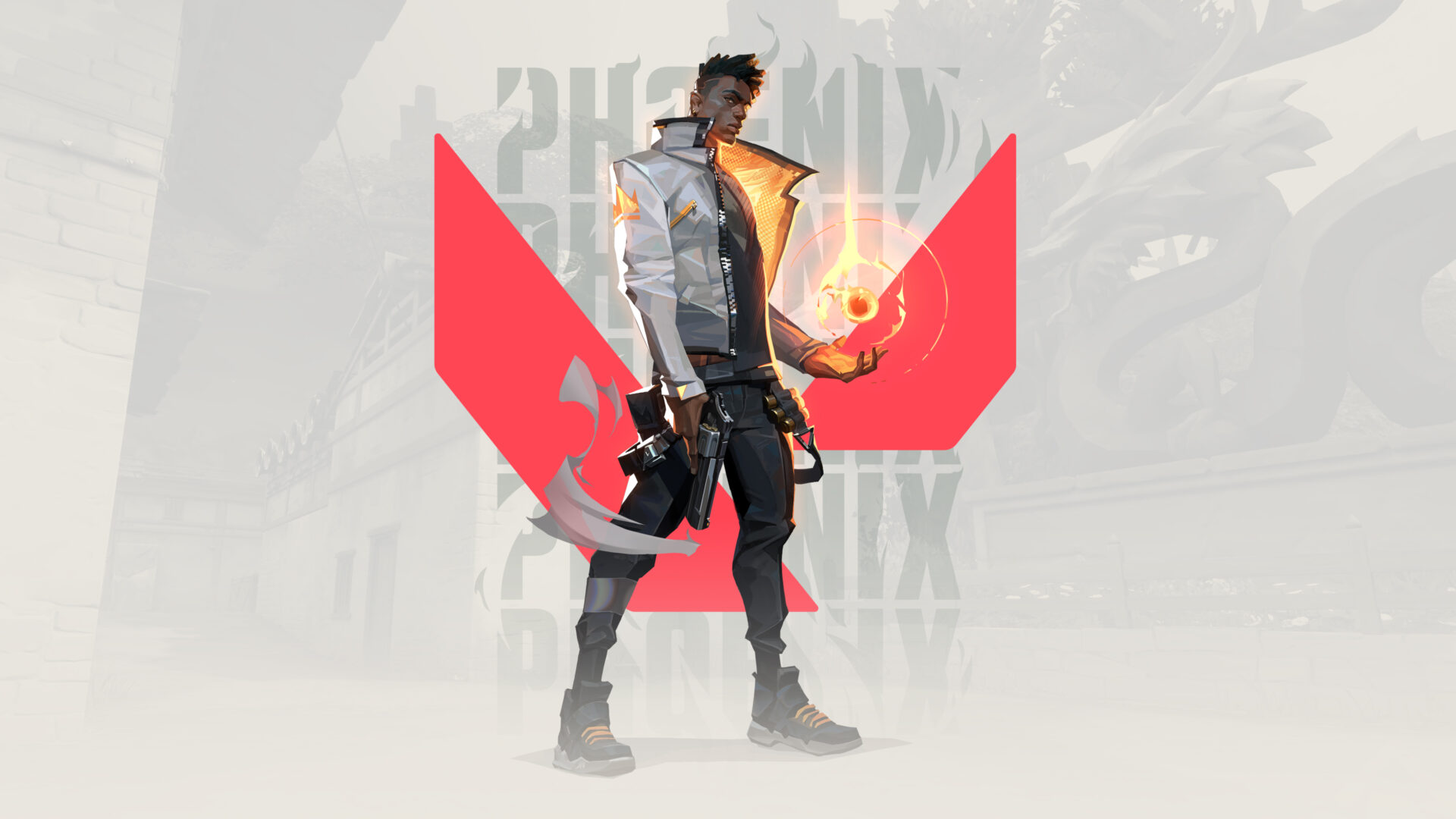 The streamer concluded, “That is not me, hopefully I can see the genuine in me, I apologize from that girl, I apologize, if that girl was taking me up or anything, I would love to hear her out. That’s not me, that clip was from months ago, I’m sorry man, peace out.” 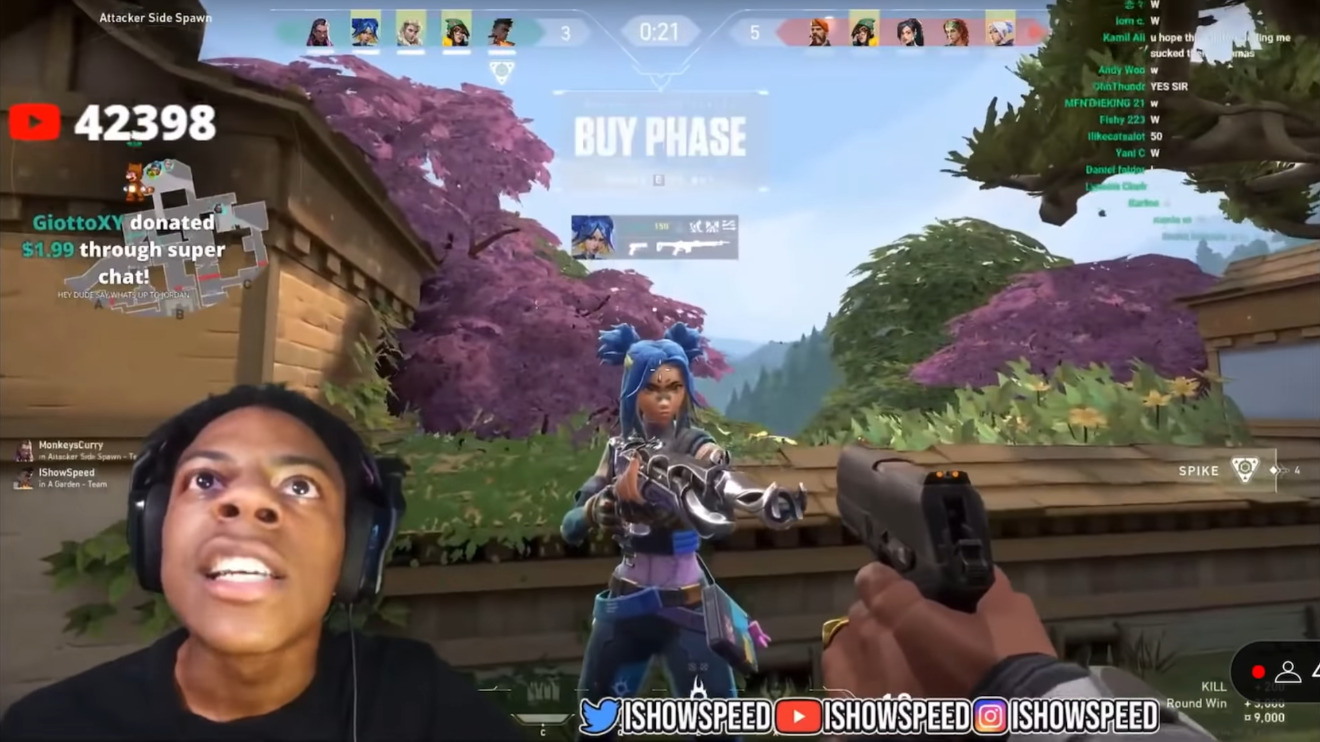 Taking notice of Lucky’s share of the initial clip, Valorant producer Sara Dadafshar tweeted, “This is a huge yikes and we do NOT want players like this in our community at all,” before immediately declaring, “I went ahead and perma banned this player from VALORANT, as well as all other Riot Games.”

“Thanks for raising this,” she added. “Please keep raising stuff like this and reporting so we can make VAL safer.” 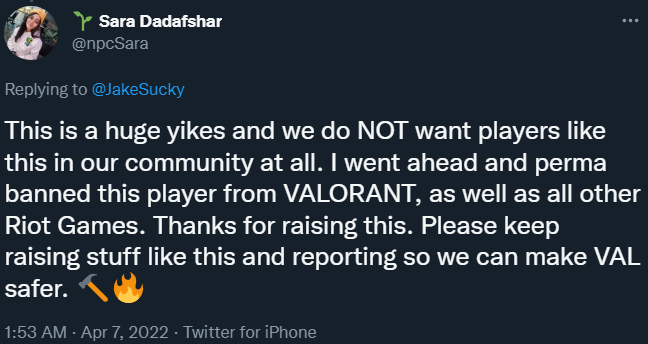 However, soon after Dadfshar’s declaration, other players surfaced another clip of Speed from a separate stream wherein he can be heard getting racially abused by teammates.

As seen in this second clip, after demanding someone tell him “how to heal in the game,” two of his teammates quip back, “only the white characters can heal,” unsurprisingly prompting another blowout from Speed.

pic.twitter.com/9a4UcTG2Jo if you perma ban speed you have to perma ban these 2 players then. its only fair if we are going by your logic

In turn, Dadafshar confirmed “We’re looking for these players to ban as well. Give us some time to find em.” 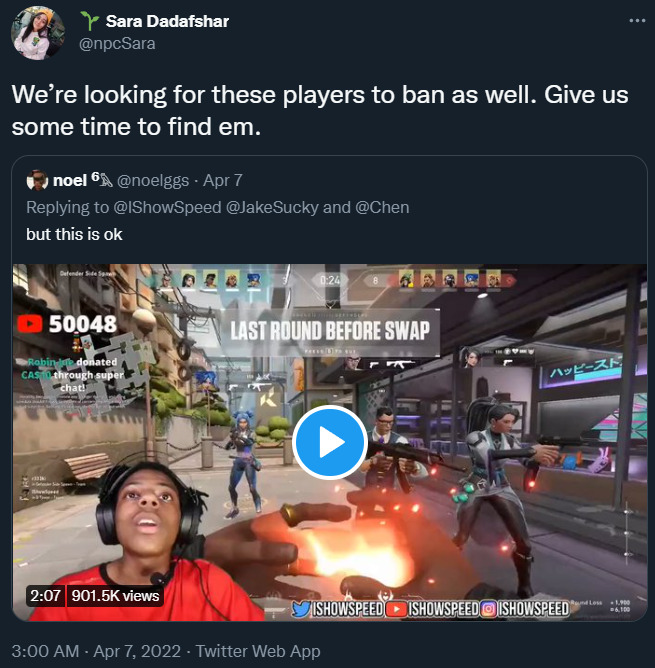 Later, when asked by another player if she would unban Speed, particularly in the wake of his apology, Dadafshar simply replied “no.”

The next day, Lucky offered his “last” words on the topic, taking to Twitter to explain, “The clip is from 6 weeks ago, I was sent many of him that were worse, I didn’t post this originally cause I was scared of how toxic the backlash would be.”

“I called out the bad behavior, I am not trying to cancel him, nor do I think he should be cancelled,” he said. “He’s young but with a large audience comes responsibility.”

“People are sharing a clip from a different stream of a different group of people being racist towards Speed, which is awful and I don’t condone, they should all be banned,” he elaborated. “But it doesn’t allow him to say whatever he wants to a different group of people. This has nothing to do with race, and anyone who somehow thinks I’m racist for this I’m not sure there’s any convincing of you otherwise, sad to see that’s what this came to.”

“Speed has apologized, hope he continues to learn and grow and he clearly has a promising future,” Lucky concluded. “To the 1,500+ people who DM’d me threatening my life or my families [sic] life or calling me a racist, wishing you the best.” 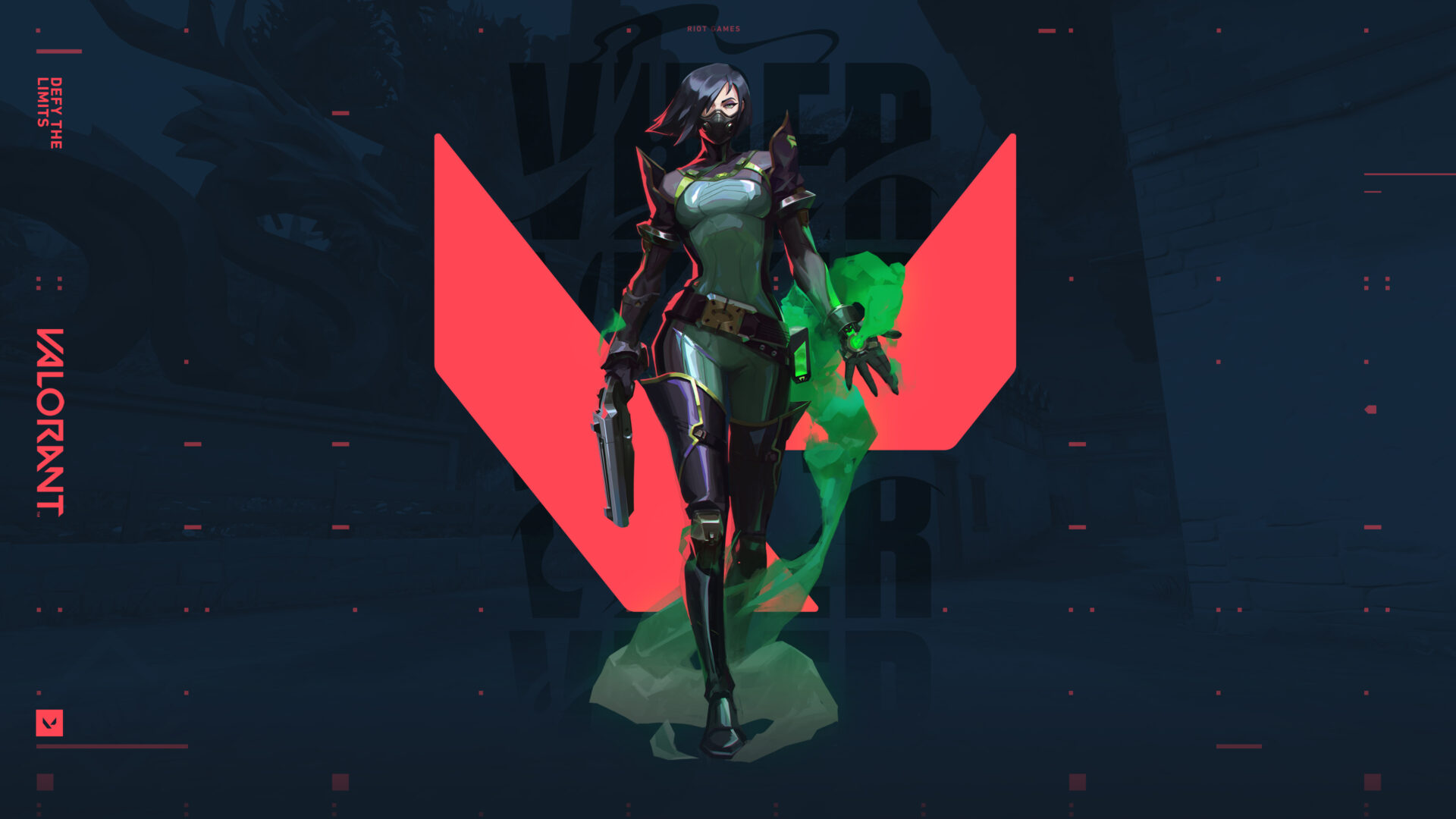 Subsequently alleging that a number of Speed’s fans – of which there are at least 7.14 million accorindng to his YouTube subscriber count took to harassment to bring him back, Dadafshar tweeted in follow up, “Over the past week, y’all have been real nasty with your remarks regarding my gender, sexuality, looks, & anything else you can get your hands on to retaliate against me standing up against sexist/racist behaviors.”

“I’m going to continue standing up against it tho,” she concluded. Y’all do you. [shrug emoji].”

RELATED: Leftist Streamers Vaush And HasanAbi Banned From Twitch For Using ‘Cracker’ As A Slur Against White People

Having just joined YouTube in December 2017, Speed has had a meteoric rise, with Google Trends showing his username gaining in search frequency around mid-2021.

His popularity seems to stem from his hair-trigger temper and over reactions, which over the course of his career have prompted the creation of dozens of memes.

Speed had previously been banned from Twitch in December 2021 over comments he made on streamer Adin Ross’ “e-dating” stream.

During the stream, Speed asked the woman he had been partnered with, Ash Kash, “If we were the last two people on Earth, and we had to reproduce to make the world continue, would you reproduce with me?”, to which she replied, “No, because that would mean our kids would have to intertwine.”

In turn, Speed countered, “Who gonna stop me? You’re not stopping me,” before being banned for “sexual coercion or intimidation.” 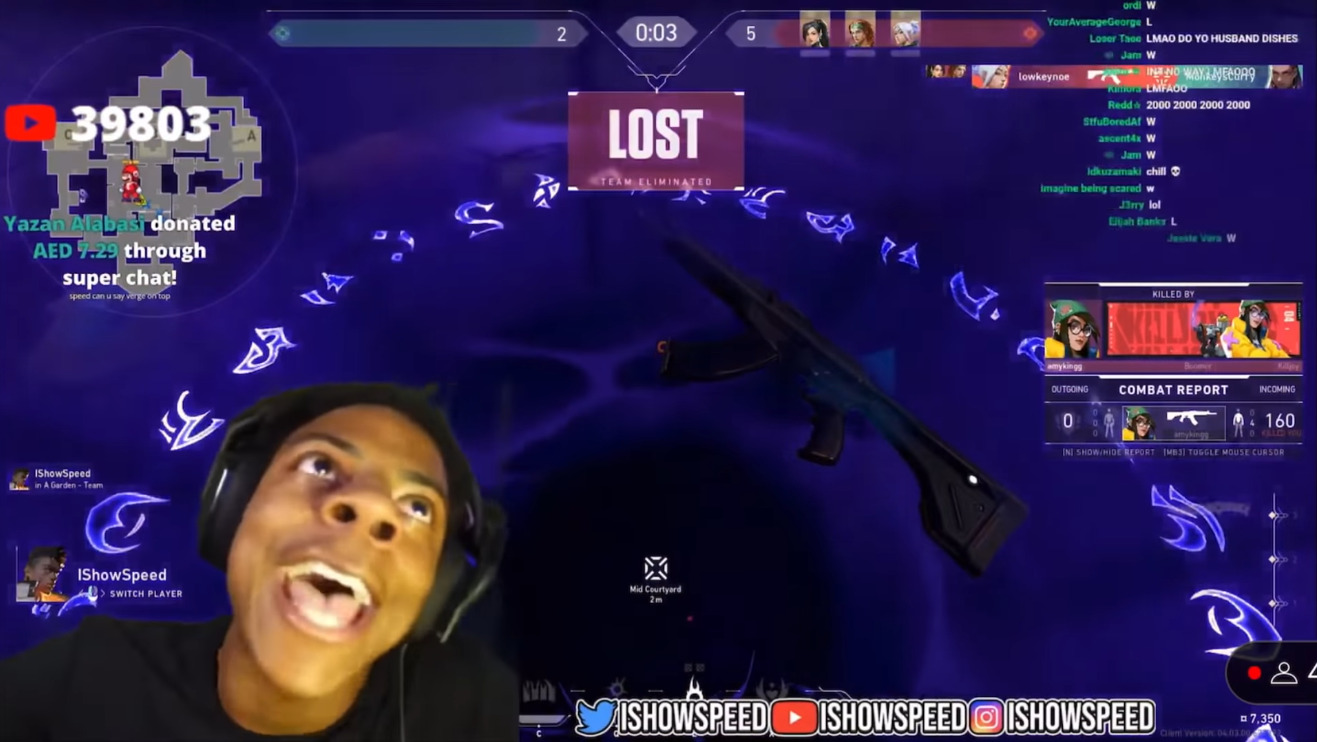 What do you think? Is Speed a victim of the spotlight, or what this an attempt to monetize his own foul temper? Let us know on social media and in the comments below.

NEXT: Twitch Permanently Bans Destiny For “Hateful Conduct,” Streamer Speculates It Was Over His “Claims That Transwomen Shouldn’t Compete With Ciswomen In Women’s Athletics”