Streamer Destiny has been permanently banned from Twitch for “hateful conduct” and, after a review by moderators, left with no chance to appeal the decision. 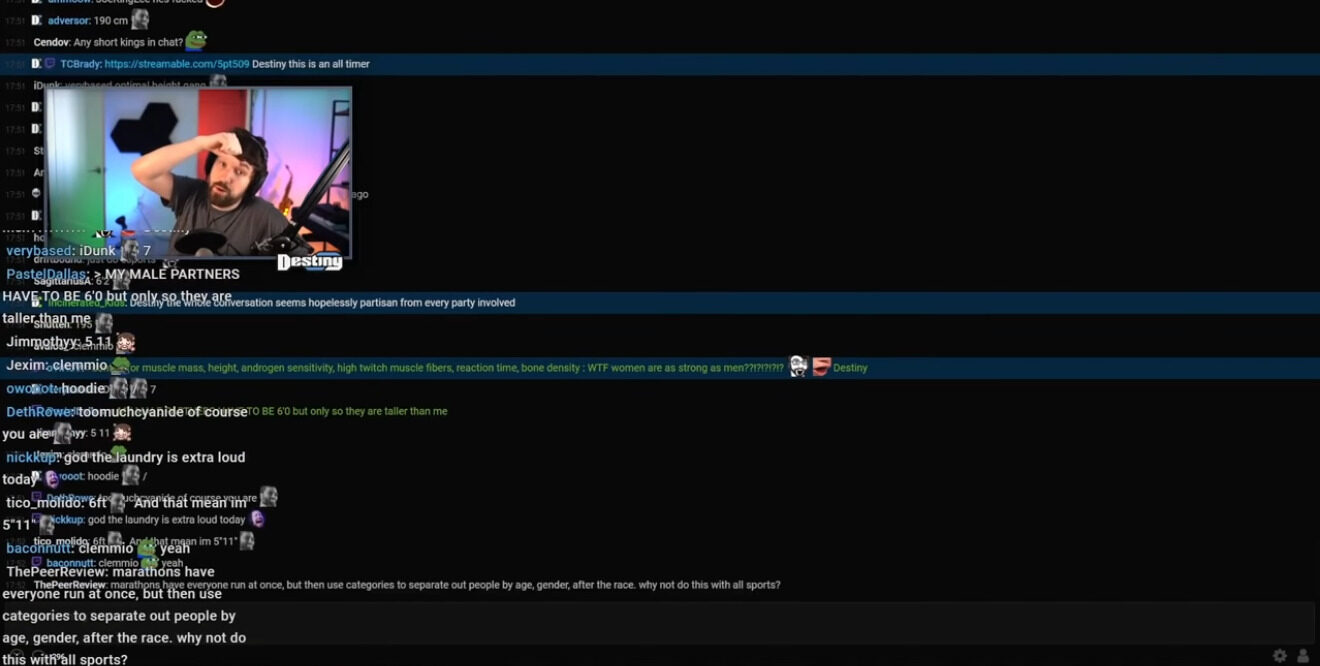 Source: No One Dares Push Back BECAUSE… | Destiny Reflects On The Trans Debate, Destiny, YouTube

Destiny, real name Steven Kenneth Bonnell II, made the announcement via the official Destiny subreddit, sharing a March 23rd email he received from the Amazon-owned streaming platform informing him that “based on a review of your activity or content, we have issued a Community Guidelines strike on your account.”

“Due to the severe nature of this violation or the fact that you’ve incurred multiple violations, your access to Twitch services is indefinitely restricted.” 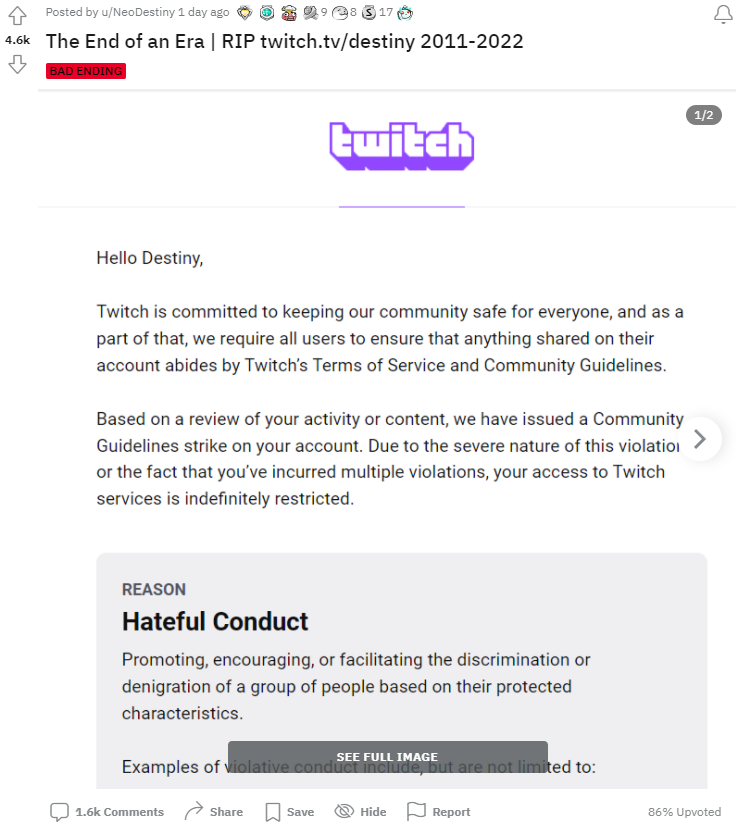 In the same Reddit post, Destiny also shared an automated email he received from Twitch after he requested a review of his ban, wherein the platform confirmed that “your account will remain suspended due to your violation of our Community Guidelines”. 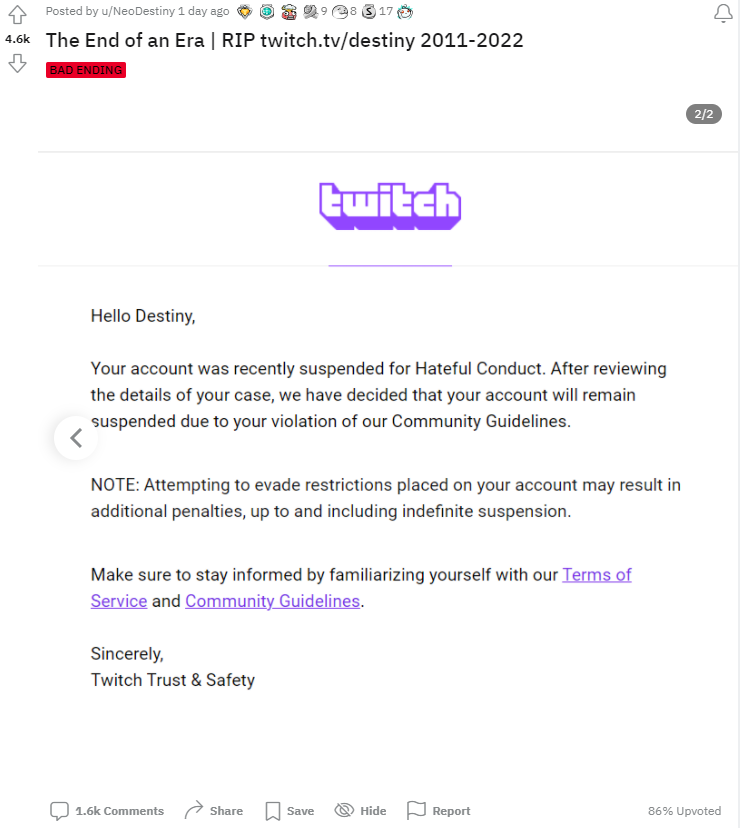 RELATED: Dr. Disrespect To “Sue The F***” Out Of Twitch Over His Permanent Ban

Though the exact piece of Destiny’s content that resulted in his ban was not stated, some have speculated it was in regards to comments he made during a stream regarding transgender issues.

While playing Elden Ring, Destiny eventually turned to discuss transgender streamer Keffals, noting how she would seemingly be “alright” getting sex change surgery due to her affluent parents.

Destiny then repeated what a chat member had stated- “it’s comforting to think this person will kill themselves in 30 years.”

Destiny soon after scoffs in seeming disgust or shock and says “Jesus Christ.”

Destiny later vented on YouTube (Time stamp 5:47:11 in the video below) that “Twitch never tells me why I get banned. They told me a violation occurred on stream, and the three possible things they gave was ‘posting a combination of words and emotes in chat to promote denigration based on race’, ‘praising or supporting a hate crime’, and then the third one- this would blow my mind if it’s the third one- or ‘advocating for the exclusion of a group of people based on their disability.'”

“There’s no way right?” he asked his chat, subsequently drawing speculation from his viewers that this may have been in reference to him saying the word ‘retard’.

Destiny also dismissed allegations that it could have been due to his community performing a “hate raid,” as well as the claim that he played a clip of someone saying the n-word on a stream, though he did admit to insulting a Vtuber (who his chat informed him had a “bad disability” and proposed as another source of the ban).

Later, he personally speculated that his “claims that transwomen shouldn’t compete with ciswomen in women’s athletics” may have also played a role in his ban. 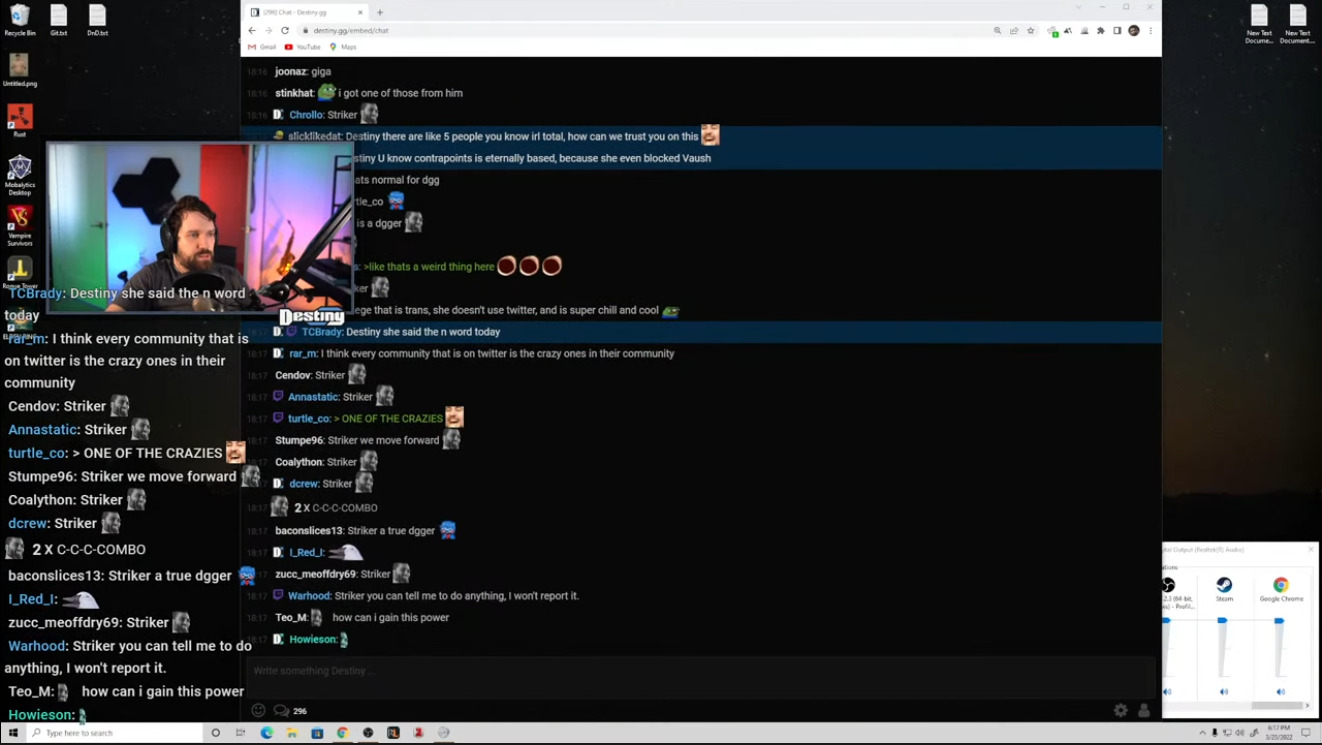 Destiny would later indicate that address his comments about Keffals, as well as further discussing his ban, in a thread on Twitter.

Replying to another Twitter user who denied Destiny’s influence in sparking the trend of politics-focused Twitch channels, he asserted, “Reality check. The new era of upper middle class white transwomen that exist today on Twitter get ‘suicidal’ when they get two mean DMs about their face.”

“You are absolutely f—–g delusional if you think you could have cultivated any space on this platform without someone with way thicker skin leading the way.”

“You’re only here to leech off of the communities others built before you,” Destiny ranted, “both figuratively (in terms of shaping the social conditions) and literally (in terms of copying the code for my site).”

He continued, “Online trans discourse has become another forum for loser white kids to virtue signal to other loser white kids about how many ratios they get or how many funds they can raise for their degen sex pest communist friends, that’s it.”

“You guys brag about how many rainbows you put in your profile and how many stupid flags you create while conservatives in the real world are tearing down trans people legislatively,” Destiny ranted. “None of that affects you all, though, because you’re too rich and too white for it to affect you.”

“Credit where credit is due for what you’ve done,” replied @7Soupy, “but I thought we already reached the point where you realized joking about suicide was not ok.”

“I joke about the suicide attempts that are jokes;” Destiny clarified in return. “The attempts that people plaster all over Twitter for hearts and retweets are a fucking slap in the face to people who are genuinely disconnected from humanity at the bottom of a pit of depression with no other way out.” 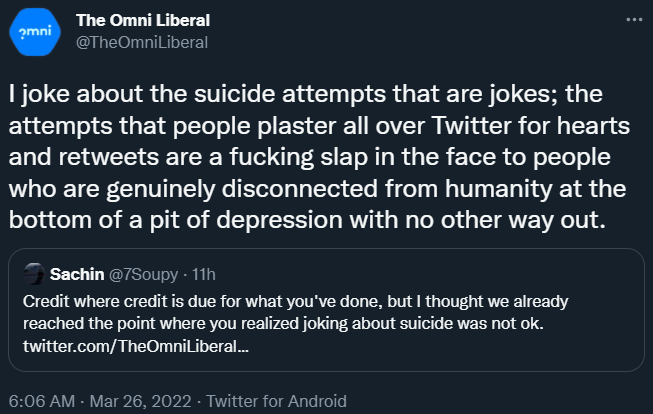 Destiny previously lost his Twitch partnership in 2020 for allegedly “encouraging violence” and was temporarily banned in 2021 after a guest shared an alleged photo of Hunter Biden engaged in intercourse with two women supposedly found among the contents of his laptop, violating the platform’s guidelines on sexually explicit imagery.

At this time, Destiny’s YouTube channel has roughly 409,000 subscribers and over 262 million views.

Originally run as a standard video game streaming channel, since 2016, his content has typically focused on political debates. 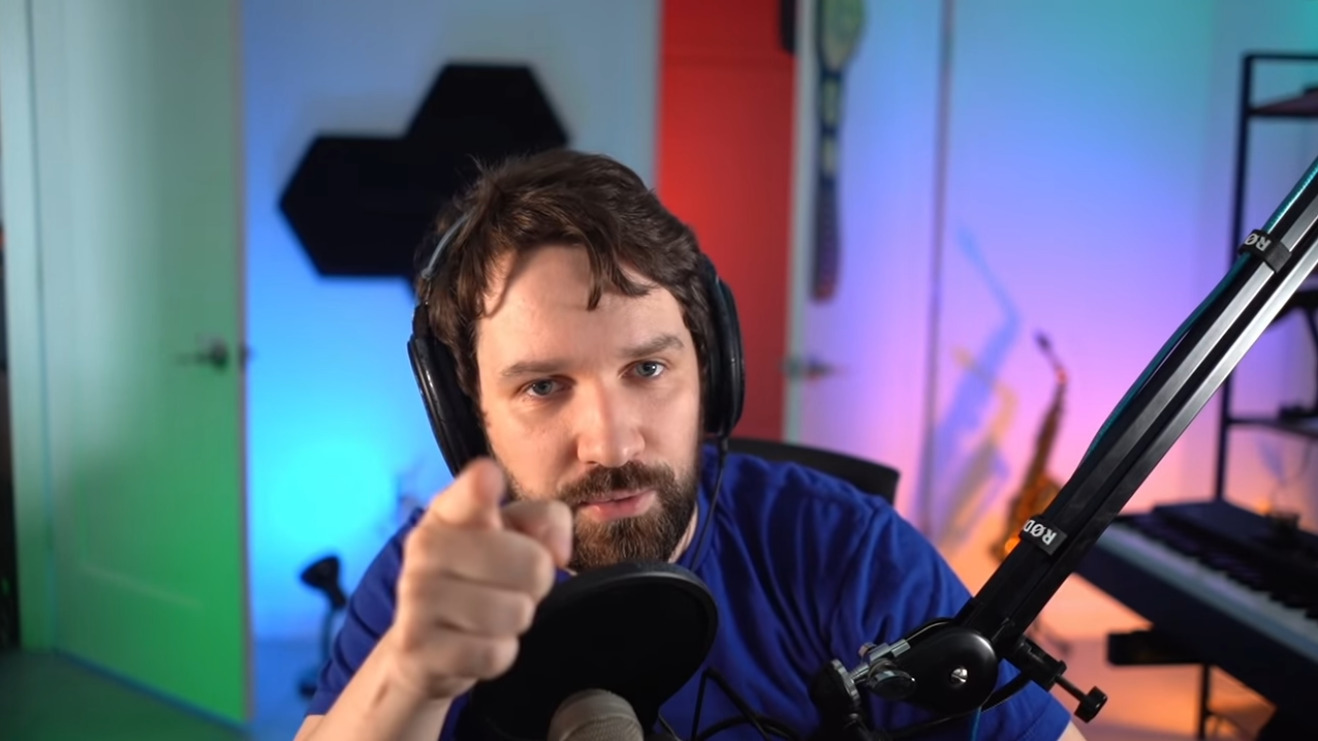 What do you think of Destiny’s ban? Let us know on social media and in the comments below.

NEXT: Leftist Streamers Vaush And HasanAbi Banned From Twitch For Using ‘Cracker’ As A Slur Against White People