In response to Bounding Into Comics’ recent reporting on her claims that Cyberfrog creator Ethan Van Sciver was “radicalizing incels”, Marvel and IDW cover artist Tess Fowler has accused the story’s writer, Jon Del Arroz, of being a “Holocaust denying Nazi sympathizer”.

[Disclaimer: Del Arroz is a contributing writer for Bounding into Comics, as noted above, and a friend of some of this site’s staff members] 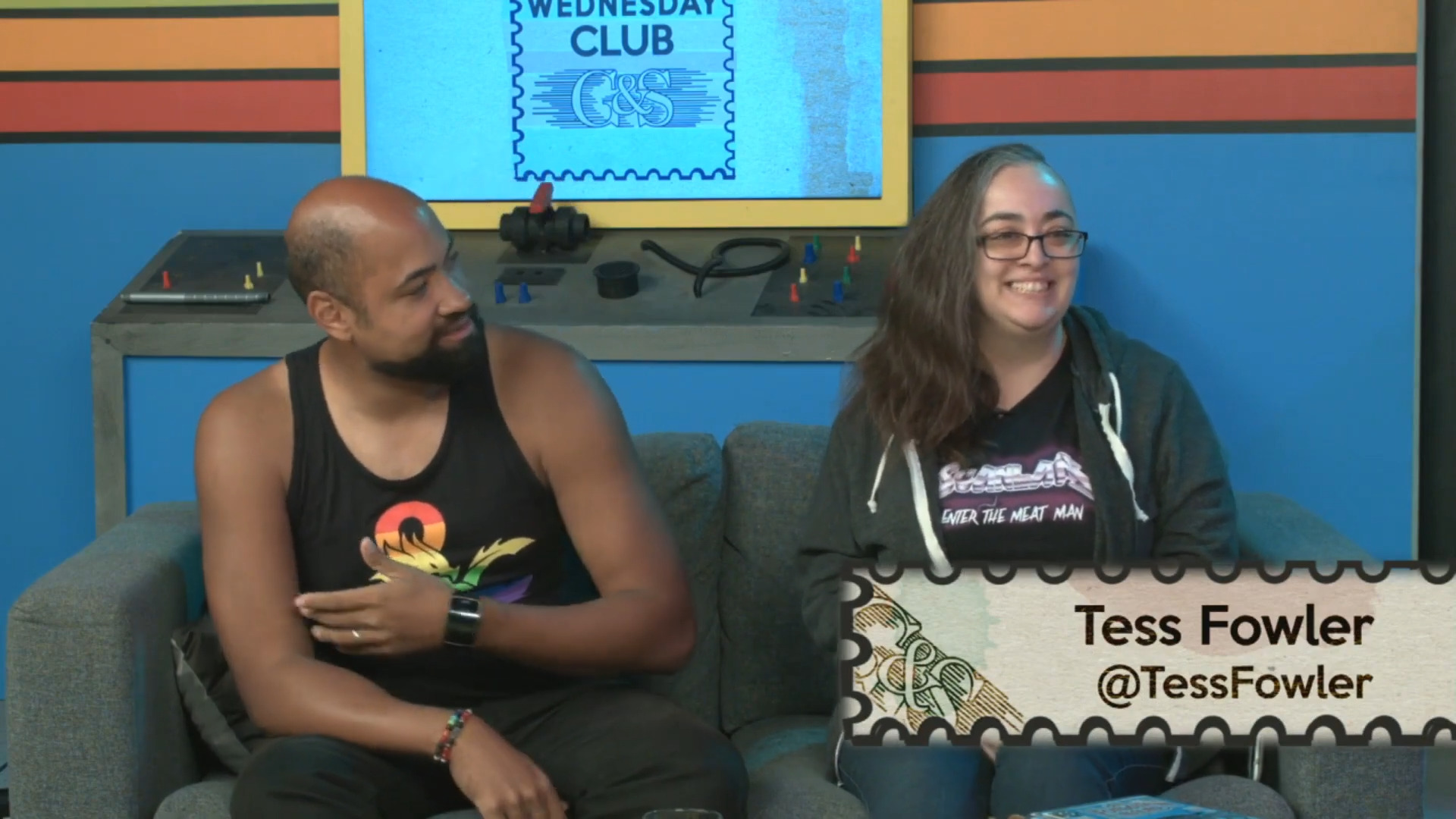 The piece which drew Fowler’s ire, as published on June 4th and headlined “Dungeons And Dragons Artist Tess Fowler Blames Ethan Van Sciver For ‘Endlessly Driving Hate At Amber Heard’”, saw Del Arroz bring public attention to not only her aforementioned accusation that Van Sciver was “radicalizing incels”, but that he was transitively responsible for “endlessly driving hate at Amber Heard” throughout her recent losing legal battle with ex-husband Johnny Depp. 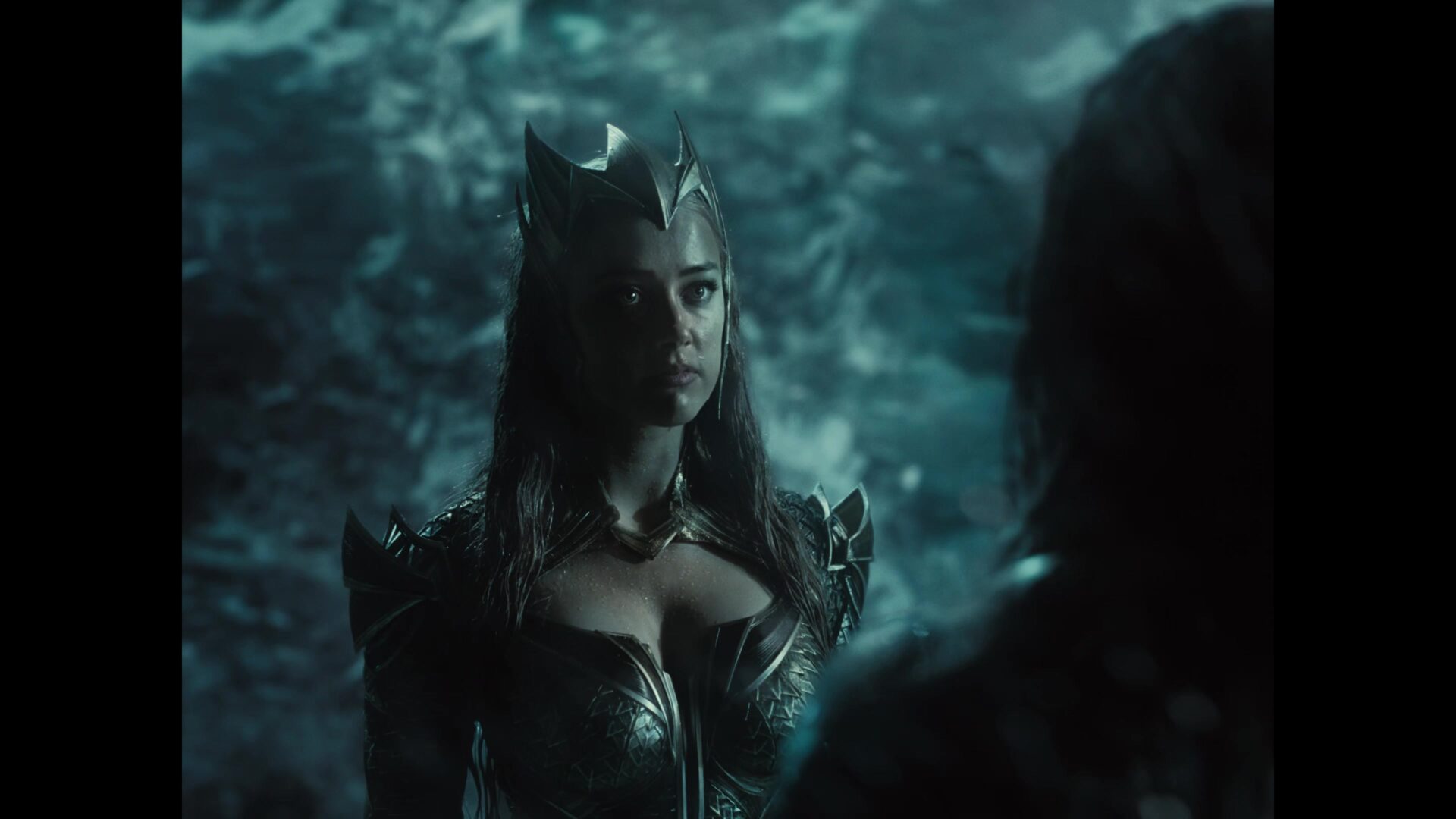 “This is who is radicalizing incels, right here,” wrote Fowler on June 2nd in reference to Van Sciver, as evidenced by Del Arroz in his article. “You want to know the source? You want to know who’s preying on out of work comic book pros and driving trolls into your social media mentions? This guy. He’s worse than Alex Jones. All you have to do is look at what he posts.”

In the tweets cited by Fowler, Van Sciver can be seen speaking in opposition of abortion, celebrating Kyle Rittenhouse’s efforts to hold the media to task for their libel and defamation of his character, and asserting that male feminists are “p—–s [who] don’t understand that when a woman loves and respects you she wants to take care of you”. 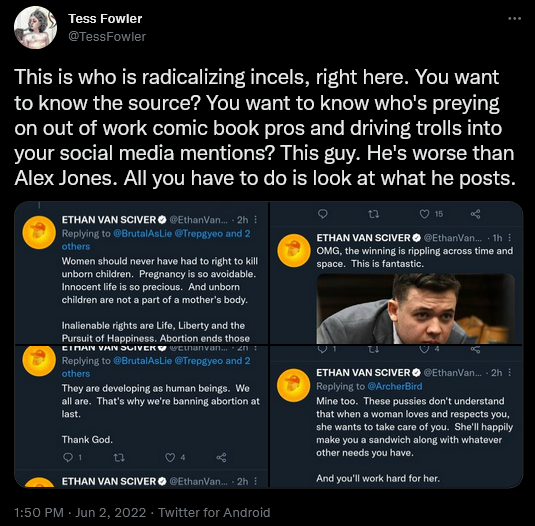 “However you might feel about Heard/Depp, it was one of this guy’s weird, obsessive devotees who was referenced in the trial for endlessly driving hate at Amber online,” she added, ostensibly making a reference to YouTuber ThatUmbrellaGuy. “The sheer volume of their hate filled lies is overwhelming to deal with. I speak from experience.”

She concluded, “Know the source. Know what and who you’re dealing with so that you aren’t blindsided. It’s best to not engage them. Block. Block their followers. Stay safe.”

Faced with pushback to her claims, Fowler took to Twitter on June 7th to extrapolate her frustration with being criticized into a general swing at the Comicsgate movement, writing, “A holocaust denying [email protected] sympathizer who worships EVS wrote an article about me for a hate site causing vile tweets about murdering vulnerable groups of people to show up in my mentions but sure your little comic book club isn’t a hate group. Nope. Not at all.”

“After cancer nothing scares me but I’d really like those of you who still straddle the fence about associating with CG people or CG adjacent people to rethink your waffling,” she wrote. “Its a hate group. Period.”

In support of her accusation against Del Arroz, Fowler provided screenshots of a June 7th Twitter thread where in response to storied fantasy and sci-fi author Larry Corria’s announcement that he would be appearing on Van Sciver’s livestream that night, Twitter user @TheVikkieVerse asked, “So, has Ethan’s Good Friend, Jon Don Arroz always been a Holocaust denier or is that a new thing?” 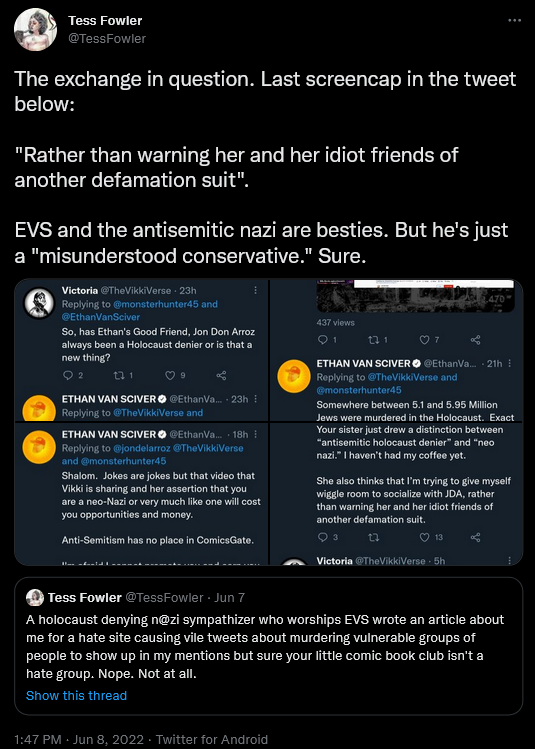 RELATED: WorldCon Apologizes And Pays The Piper In Settlement With Jon Del Arroz

Drawing a response of “That’s a weird thing to call refusing to date you,” from Van Sciver himself, @TheVikkiVerse replied with two clips of the alleged anti-semitism on the part of Del Arroz. 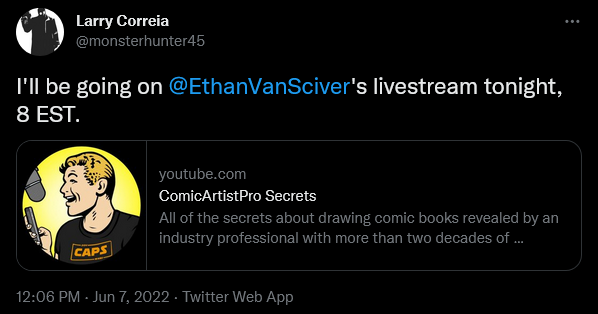 In the first, during a livestream discussion between himself, writer J. Ishiro Finney, and his attorney Peter Bradley, Arroz can be heard watching a separate livestream by Comicsgate-affiliated creator Matt Bahr and mocking his assertion that “millions of Jews” were killed in the Holocaust, “It was probably more like 300,000.”

The clip shared by @TheVikkiVerse then cuts in with a text card that reads, “485,000 Jews were killed at the Belzac camp alone.”

In the second, responding to a tweet from Bahr in which he responded, “The number is 6 million not ‘more like 300,000’. Seek help,” Del Arroz fires back, “I’m sorry, 300,000 was just an estimate I made yesterday. I just want to say sorry to all the 6 Billion Jews that were killed, because if that is bad to underestimate, I’m going to overestimate it to be safe.”

“But anyway, I feel bad for the 6 Billion Jews that were likely killed, just to be safe on this one,” says.

Another title card then appears noting that “Jon Del Arroz privated both of his [relevant] livestreams.”

Viewing the clip himself, Van Sciver replied to @TheVikkiVerse, ”Somewhere between 5.1 and 5.95 Million Jews were murdered in the Holocaust. Exact figure cannot be known. People round off their estimation at 6 Million.”

“Underestimating it isn’t funny, and JDA should know better,” he declared. 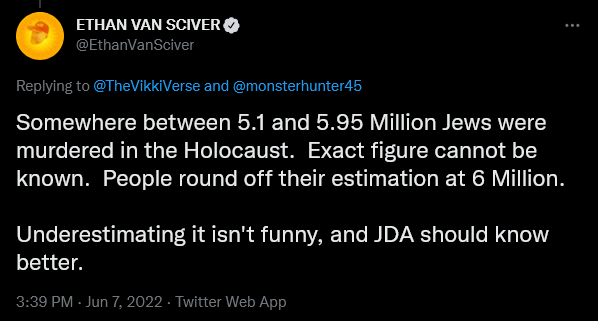 Van Sciver’s response in turn drew one from Del Arroz, who informed his fellow comic creator, “I sometimes get into trouble for edgy jokes. Some like my sense of humor, some don’t. I apologize Ethan and I will be better. I love the Jews.”

“Shalom,” Van Sciver tweeted to Del Arroz. “Jokes are jokes but that video that Vikki is sharing and her assertion that you are a neo-Nazi or very much like one will cost you opportunities and money. Anti-Semitism has no place in ComicsGate. I’m afraid I cannot promote you and earn you at least $70,000.” 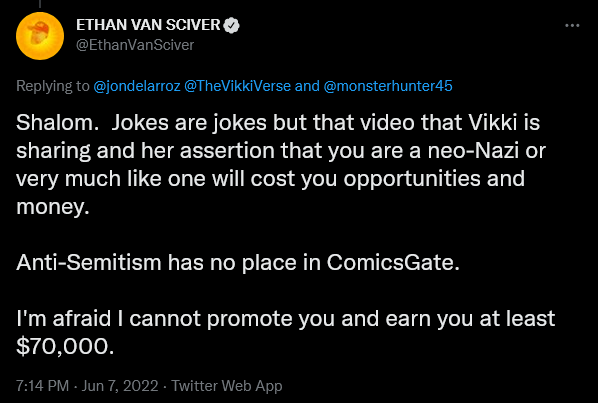 The conversation was then joined by Twitter user @pokerwhore72, who opined to Van Sciver, “You know, if everyone just blocked her she wouldn’t be a thing.”

“Your sister just drew a distinction between ‘antisemitic holocaust denier’ and ‘neo nazi,’ said Van Sciver. “I haven’t had my coffee yet. “She also thinks that I’m trying to give myself wiggle room to socialize with JDA, rather than warning her and her idiot friends of another defamation suit.” 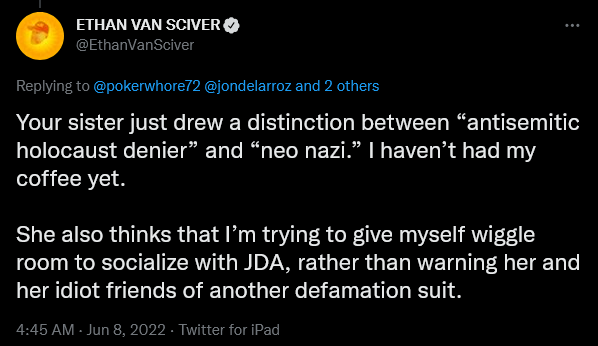 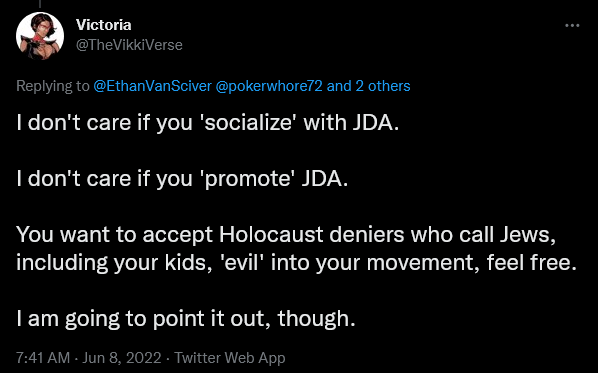 “You have to be the stupidest woman on the face of the earth,” concluded Van Sciver.

Further addressing this exchange, Fowler continued, “He fake scolds his friend saying he can’t deny the Holocaust in public because he’ll lose money and then insults the woman who told him. His followers agree.”

“Comicsgate is a hate group,” she affirmed.

Informed of this article’s upcoming authoring and publication through internal and official Bounding Into Comics channels, Del Arroz offered the preemptive comment, “These comic book pros are frustrated that a ComicsGate creator is crushing it on Kickstarter.”

“We aren’t supposed to be able to compete on the platform and my book resonating so well with general readers is throwing them into a panic,” said Del Arroz, whose current sci-fi thriller graphic novel OVERMIND is currently open for crowd-funding on Kickstarter. “It shows CG can go anywhere and win.” 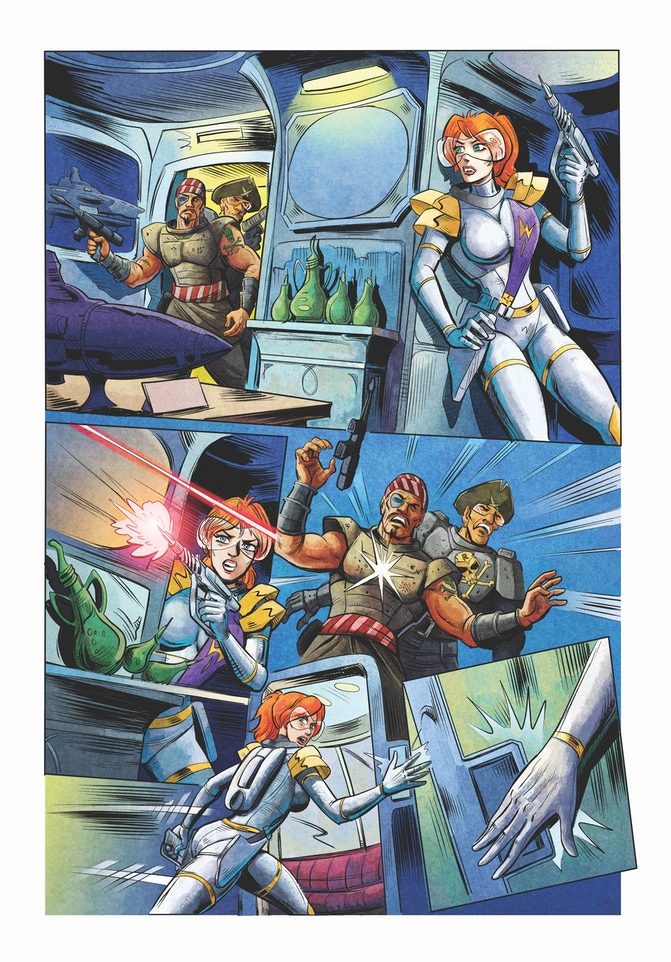 What do you make of the accusations against Del Arroz? Let us know your thoughts on social media or in the comments down below!

NEXT: Jon Del Arroz Promises To Sue The Game Manufacturers Association After They Suspend Him For “Hate Speech And Bullying”