Duel Monsters fans around the world are mourning for the loss of the man who started it all, as Yu-Gi-Oh! creator Kazuki Takahashi has tragically passed away at the age of 60. 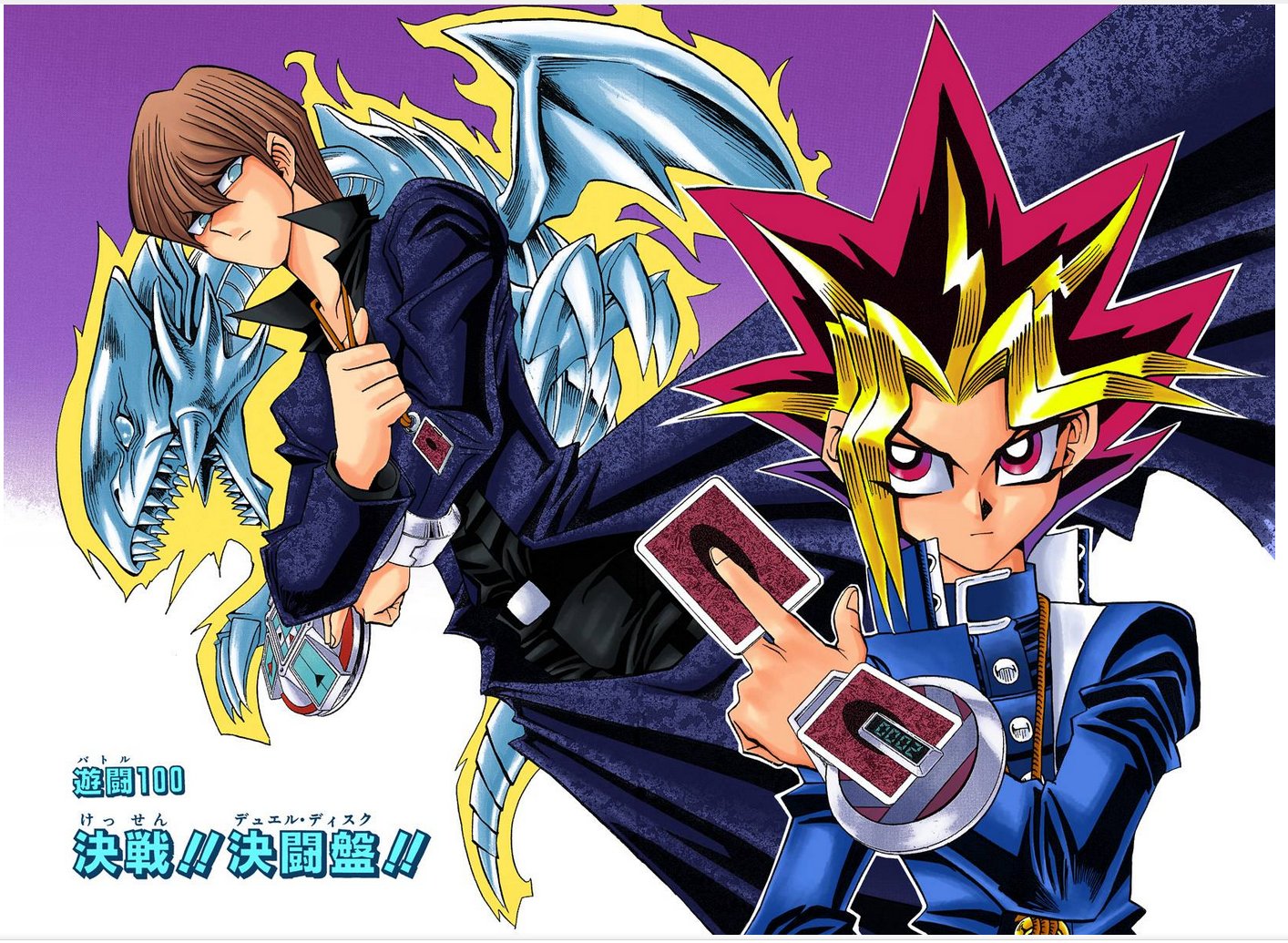 As reported by The Okinawa Times (via DeepL), Takahashi was found floating face down in the waters off the coast of Onna in Nago City, Okinawa Prefecture around 10:30 AM on July 6th following a report of a potential “dead body floating” to the Nago Coast Guard Station from a passing boater.

Authorities believe that the mangaka had already been dead for at least one to two days prior to the discovery of his body. 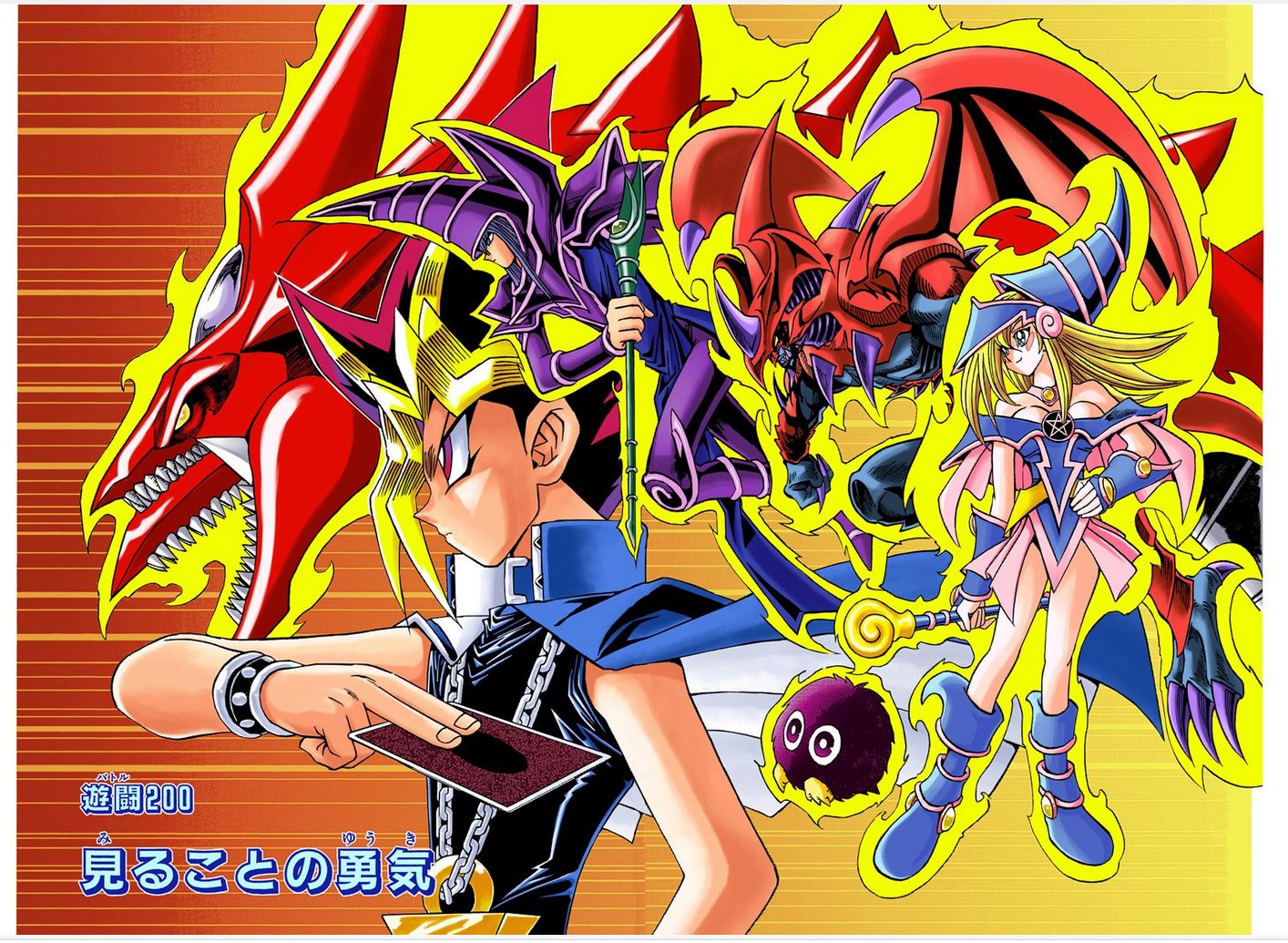 Though his identity was not immediately confirmed at the time of the initial report, according to broadcaster TBS (via The Japan Times), “Takahashi was traveling in Okinawa alone. A car rental company contacted police on Wednesday night saying it could not reach him, prompting the coast guard to suspect the body was his.”

On July 7th, the Nago Coast Guard Station officially identified the 60-year old Takahashi as the deceased. They also noted that he was found wearing snorkeling equipment, explained that his body lacked any significant injury, and confirmed that he was visiting Okinawa alone. 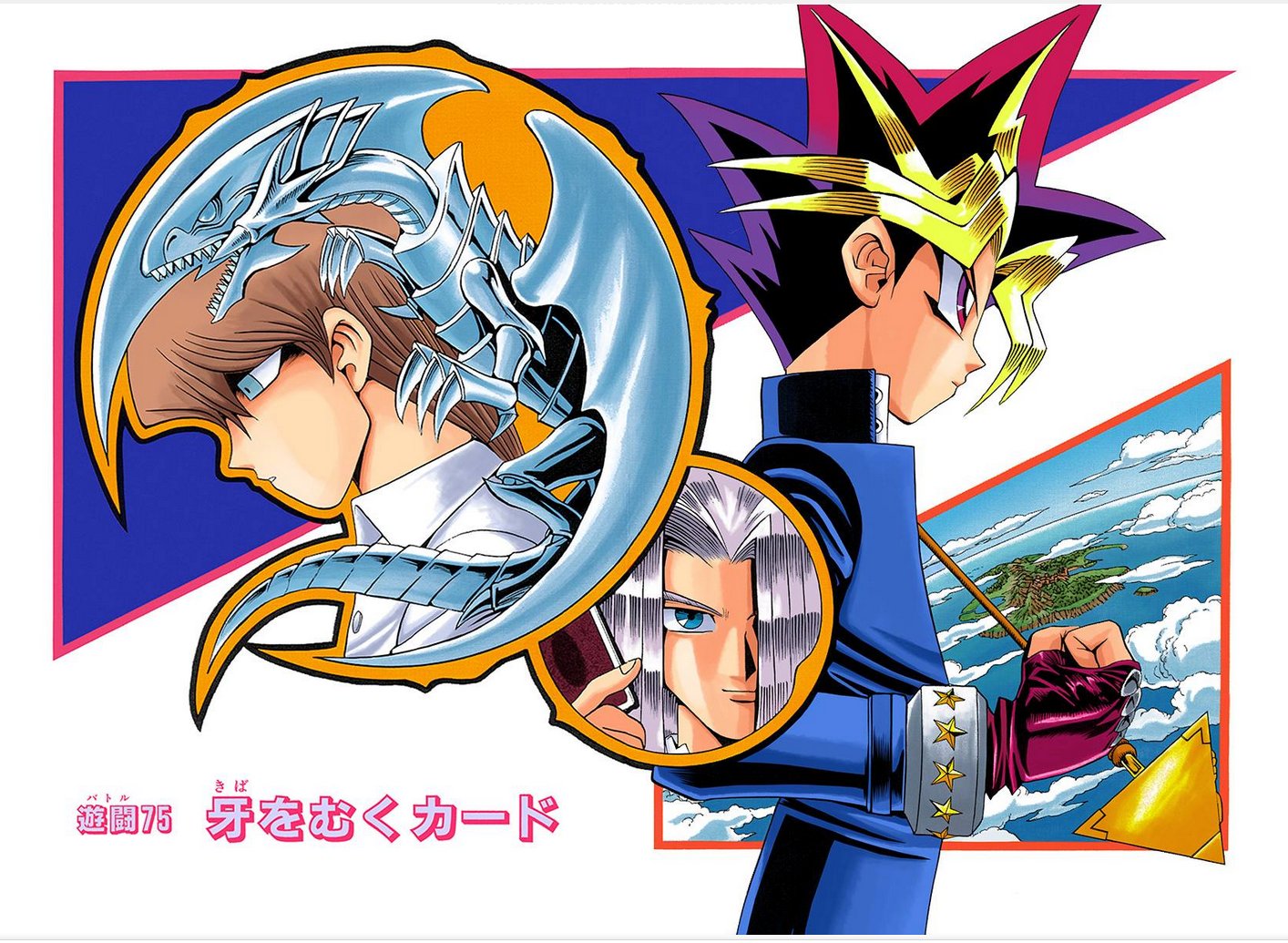 According to the authorities, an abandoned rental car rented by Takahashi was found on a farm road near a beach in Onna Village about 12 km from where his body found with his driver’s license left in the vehicle.

The Japan Coast Guard has confirmed that they will be investigating the circumstances leading up to Takahashi’s death. 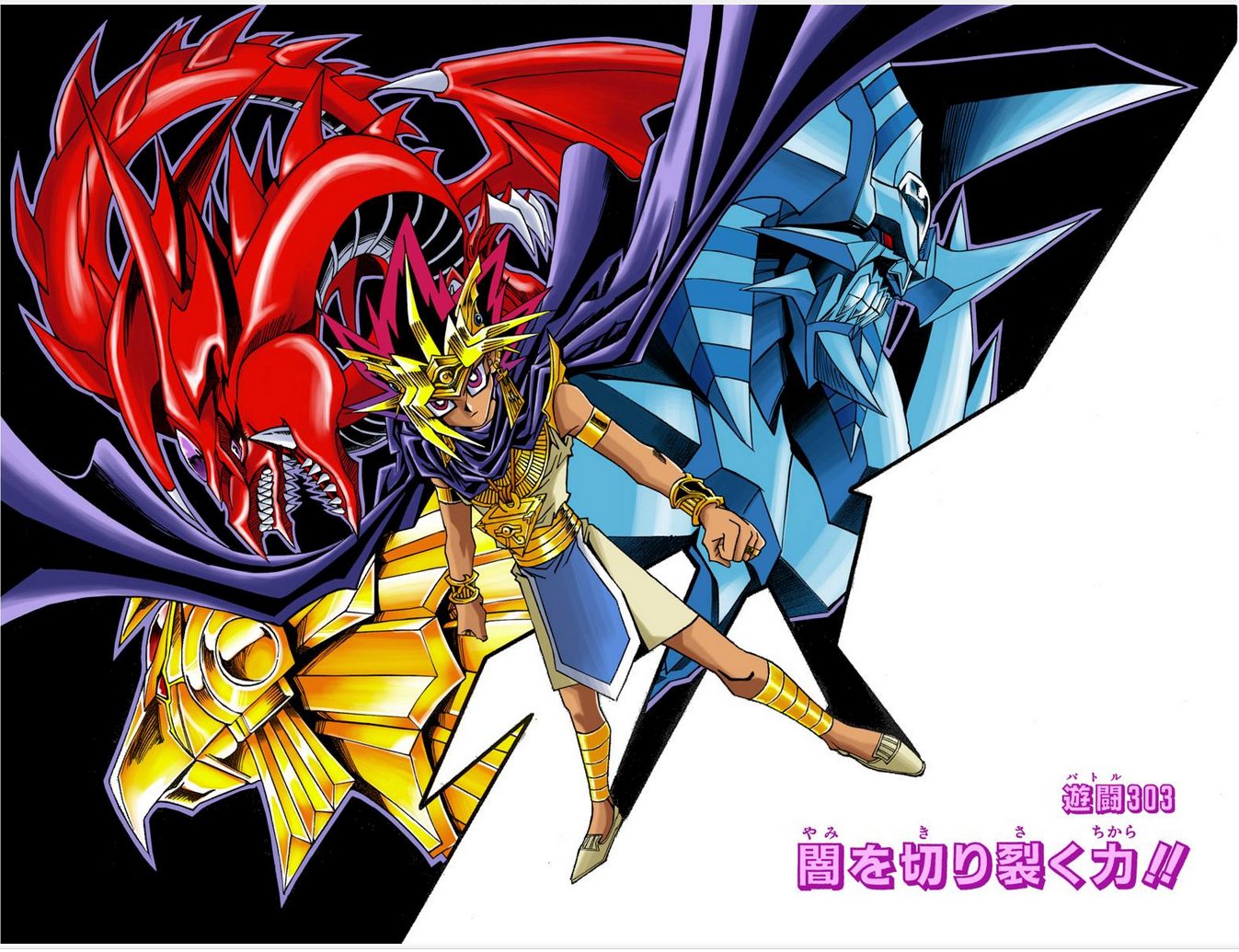 In light of the tragic news of Takahashi’s passing, a number of his peers and associates took to social media to pay their respects to the iconic creator.

Konami, the company responsible for the real-world version of the series’ signature card game, lamented, “We are shocked and saddened to hear of the sudden passing of Mr. Kazuki Takahashi.”

“We are deeply grateful for the wonderful ‘Yu-Gi-Oh!’ universe that he has created, and our thoughts are with his friends and family at this difficult time,” the company added. “Together with his countless fans, we pledge to carry on the ‘Yu-Gi-Oh!’ legacy with all the love and care it deserves.” 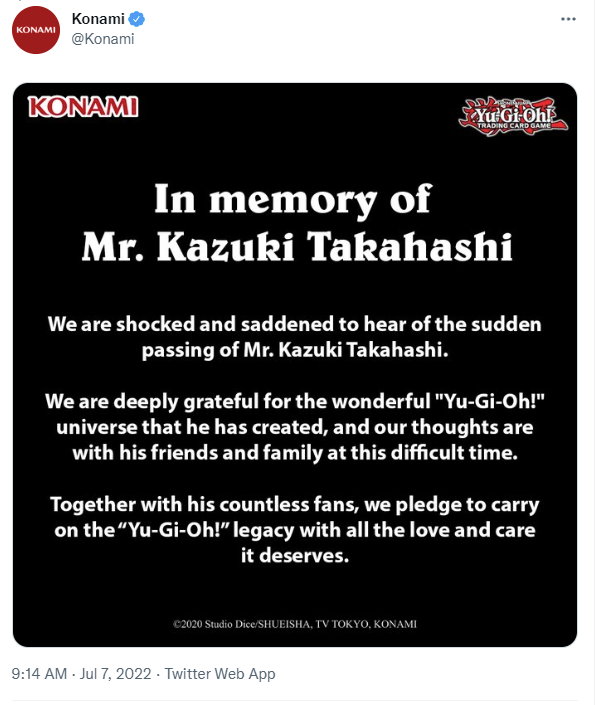 Junichi Hayama, the Animation Director and Key Animator for various episodes of the Yu-Gi-Oh! anime adaptation, tweeted out a sketch of Yami Yugi and declared, “It’s a shame.” 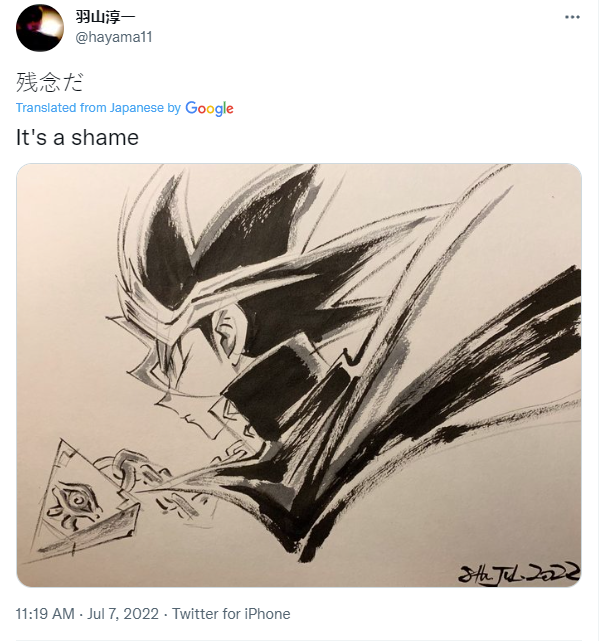 “I guess I’m getting old,” he added in a follow-up tweet. “Obituaries are becoming a bone of contention for me.”

Yugi’s Japanese voice actor, Megumi Ogata, tweeted, “I heard that it was Mr. Takahashi who first recommended me for the role… The ratings skyrocketed around the time we entered the second season, and at the same time the cards started exploding in sales.”

“Thank you, Mr. Takahashi,” she mourned. “I pray for your soulful rest in peace.” 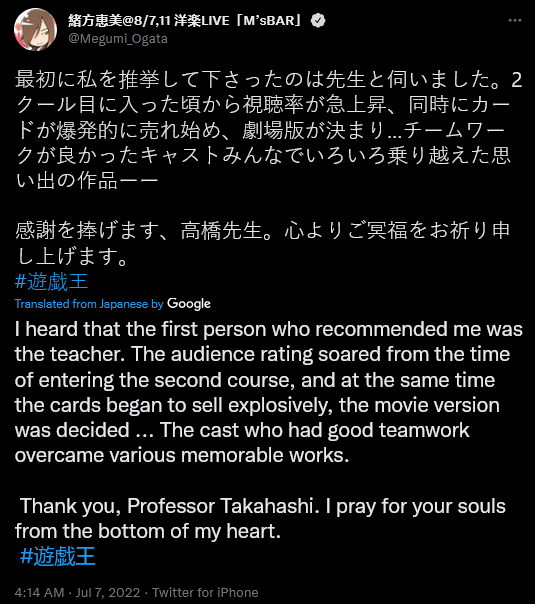 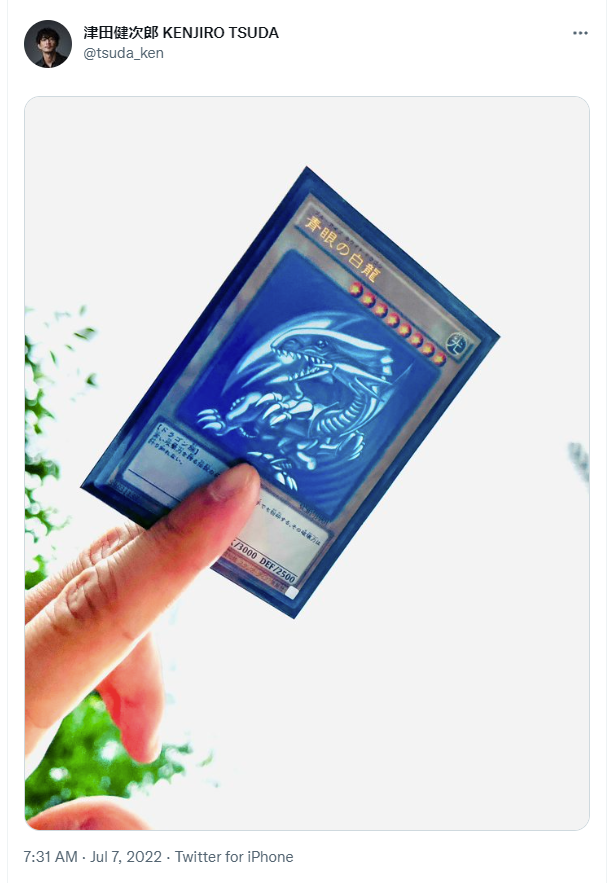 Tsuda’s English-language counterpart, Eric Stuart, was heartbroken by the news, tweeting, “This is incredibly sad news. So shocking.”

“An amazingly talented man,” he said. “Sensei created a role that would help define my voice acting career. He once told me my version of Seto Kaiba was his favorite. RIP. Love, Kaiba.” 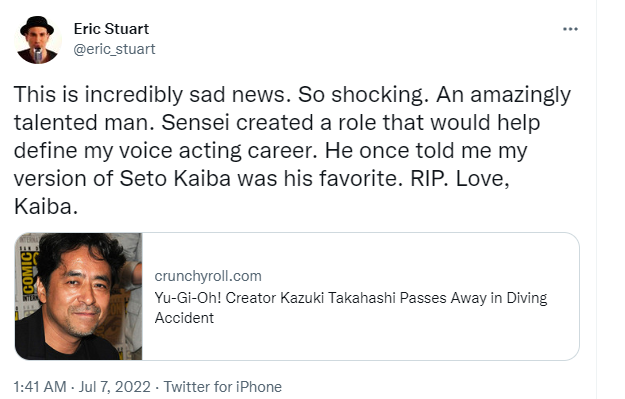 “RIP Sensei,” he captioned a photo of himself wearing the gear. 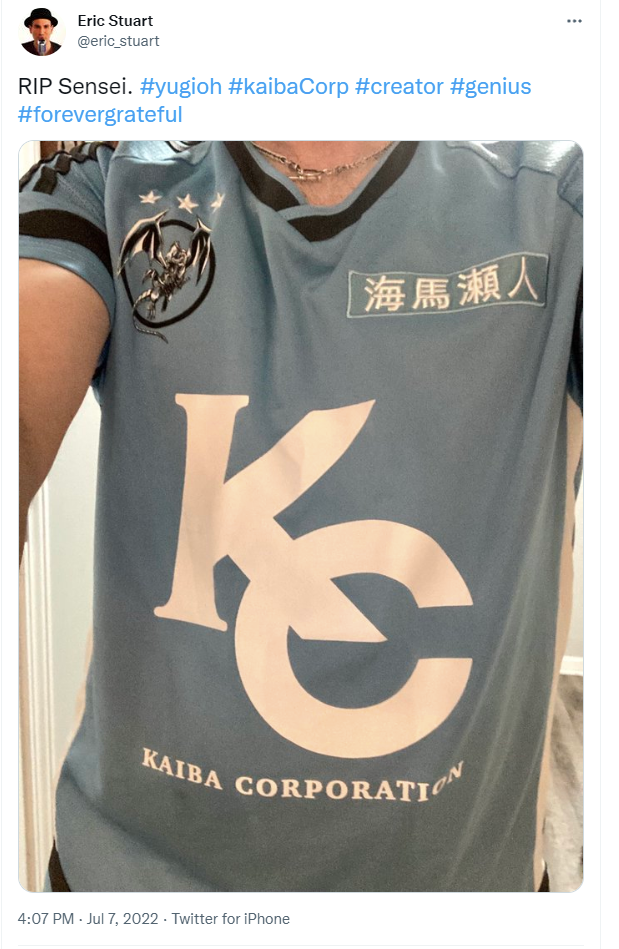 “It saddens us to hear of the passing of Yu-Gi-Oh! manga and game creator Kazuki Takahashi, who was a recipient of Comic-Con’s Inkpot Award in 2015,” wrote the official San Diego Comic-Con Twitter account. “Our sincerest condolences go out to his family, friends, and fans.” 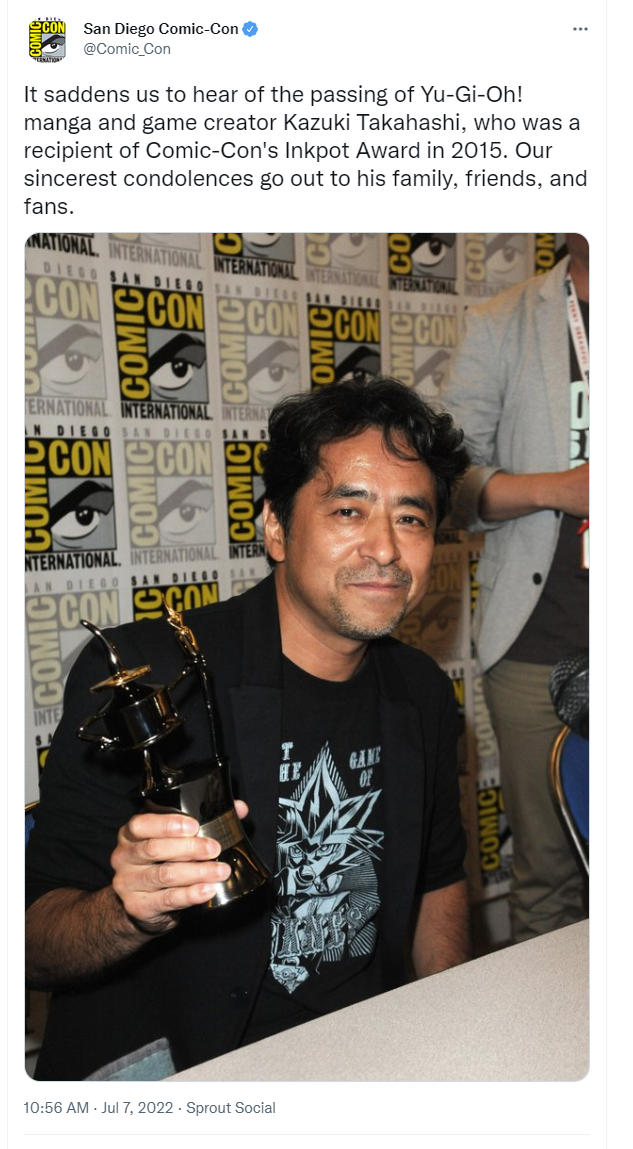 The original Yu-Gi-Oh! manga was about  Yugi, a teenager who receives an ancient puzzle that, upon being solved, awakens in him the alter ego of an Egyptian pharaoh, Atem. 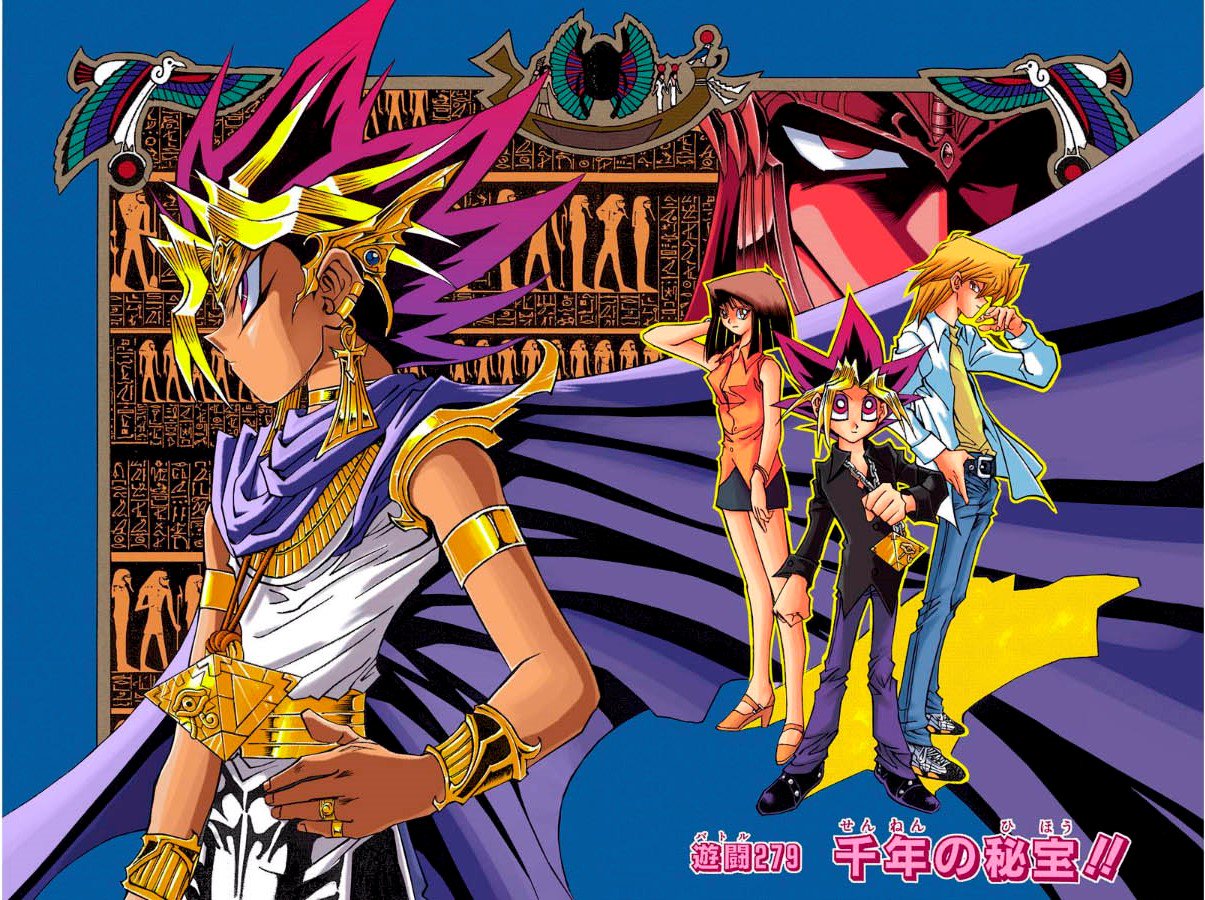 With Atem able to take over Yugi’s body, the pair soon find themselves solving their conflicts through a variety of various games.

Though these games initially take the form of such challenges as a food-based version of Russian Roulette’ or a take on ice hockey played with iron plates, Yugi eventually finds his niche in the series’ Duel Monsters card game. 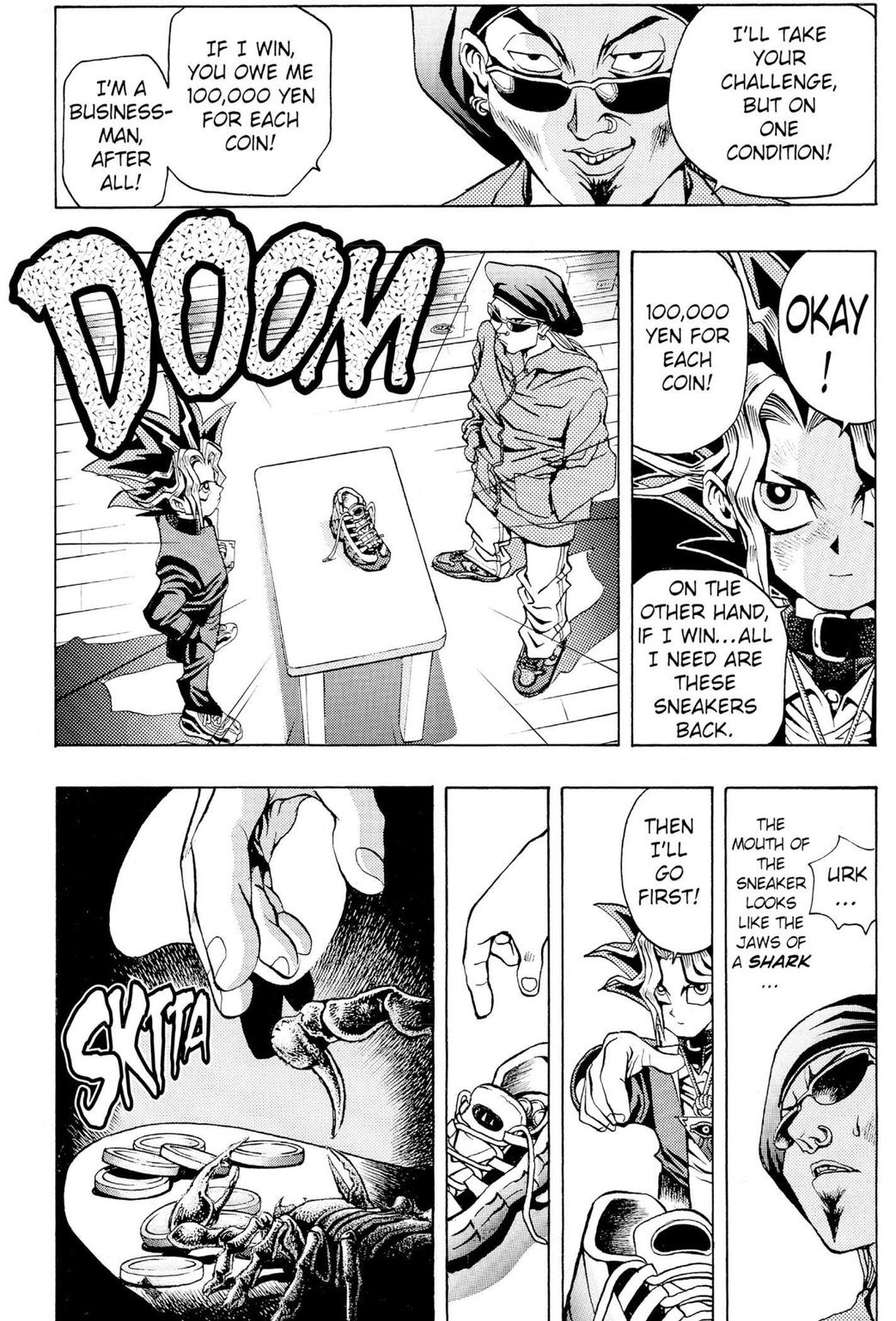 The manga gave rise to a multimedia empire, which now includes a trading card game as well as numerous anime series and films.

Incredibly, throughout his life, Takahashi remained a key part of the franchise’s expansion, offering some level of oversight over nearly every project developed throughout the Yu-Gi-Oh! franchise’s nearly 30-year history.

Most recently, he wrote the original story for the 2016 movie Yu-Gi-Oh! The Dark Side of Dimensions. 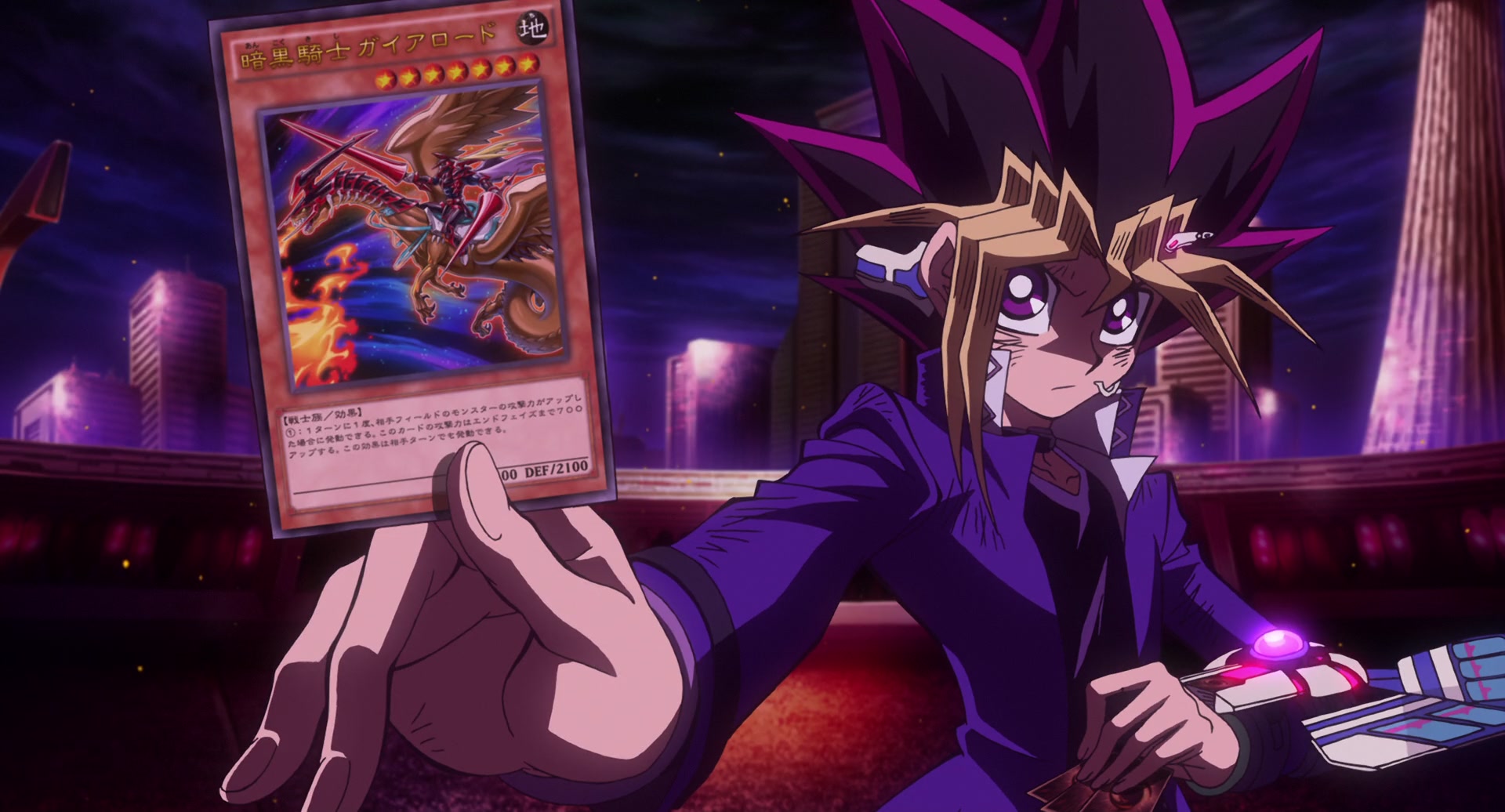 Source: Yu-Gi-Oh! The Dark Side of Dimensions (2016), Toei Animation

The first, set in 2011, is that of ‘World’s Best-Selling Trading Card Game’, achieved and held ever since the game sold more than 25.17 billion sets around the world.

In 2012, the 100th Yu-Gi-Oh! Championship Series event took the title of Largest Trading Card Game Tournament Ever Held, hosting a total of 4,364 duelists who believed in the heart of the cards. 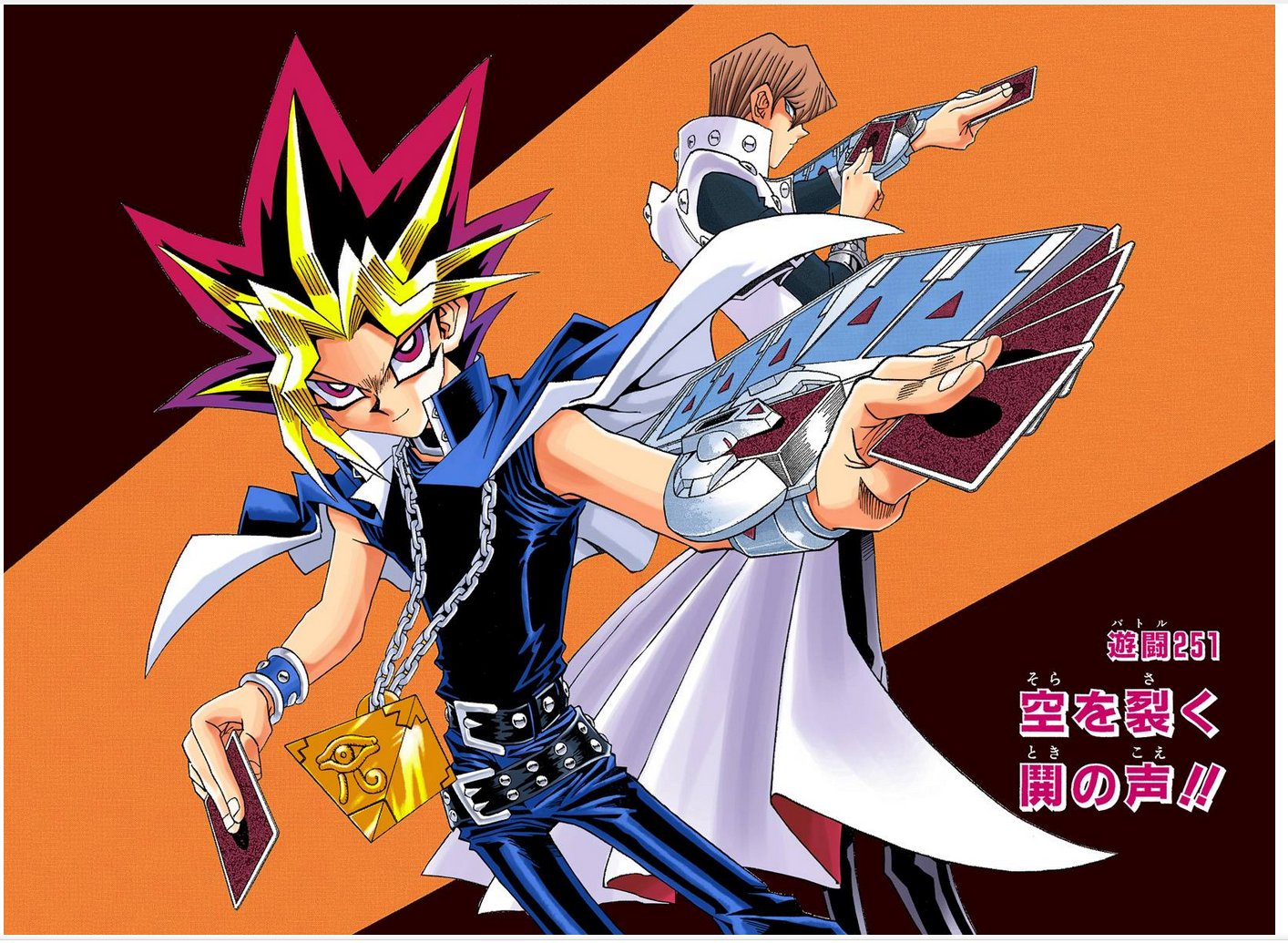 How has Takahashi’s passing impacted you? Let us know your thoughts, as well as your favorite Takahashi works, in the comments down below.

Editor’s Note: This article was updated to include Megumi Ogata’s thoughts on Takahashi’s passing.