Recent tweets from Hunter x Hunter creator Yoshihiro Togashi have raised concerns regarding his health and led some fans to question whether his plans for an eventual return to working on the series is the best option for the ailing mangaka’s future. 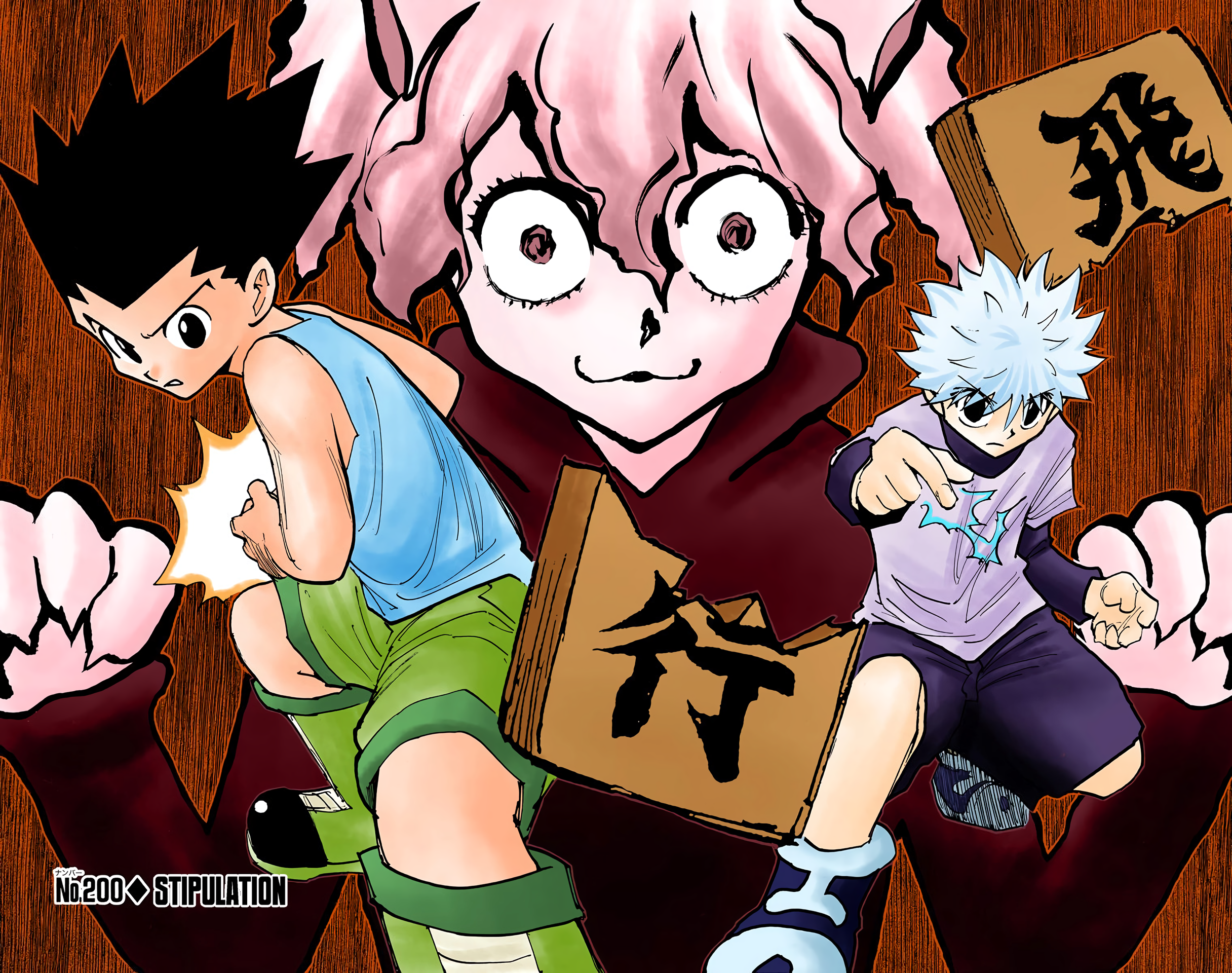 Ever since creating his Twitter account back in May, Togashi has been posting daily updates regarding his progress on new chapters of Hunter x Hunter, often times with photos of his in-progress pages.

Unsurprisingly, many fans follow his tweets with baited breath, each one eagerly hoping that the next post will bring news of an official date for the series’ return to Shonen Jump. 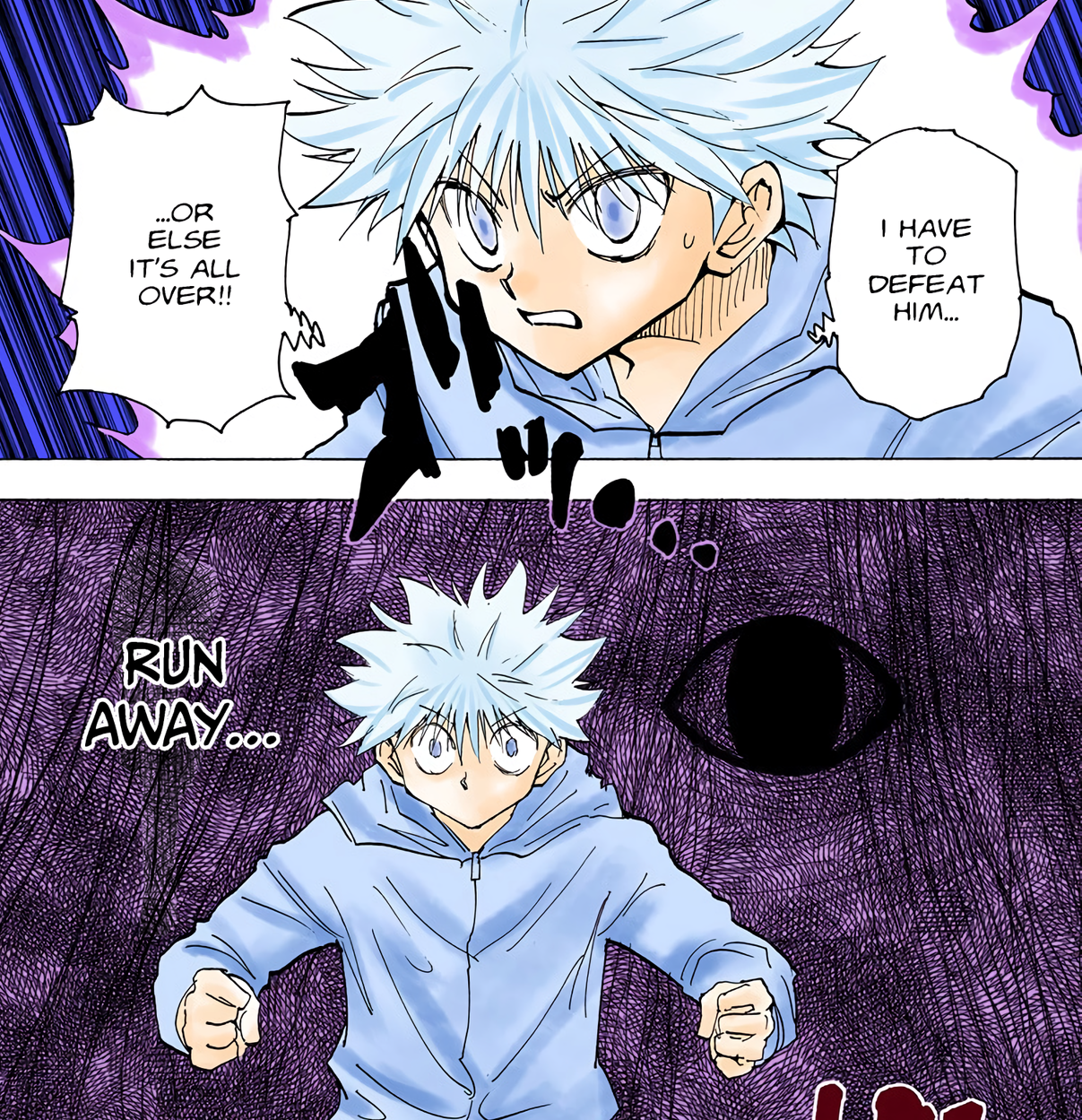 Unfortunately, Togashi’s recent tweets have raised concerns among many that not only may Hunter x Hunter never return from its semi-permanent state of limbo, but also that the mangaka’s health is taking a turn for the worse.

Fans began to become concerned on August 11th when Togashi, along with his daily manga update, alarmingly revealed (translated via DeepL) that his latest “symptoms did not improve” and thus led him to spend “a lot of time on treatment and recovery.”

Unlike his usual updates, this one did not include a photo recounting his progress, and since then none of his posts have included such an image. 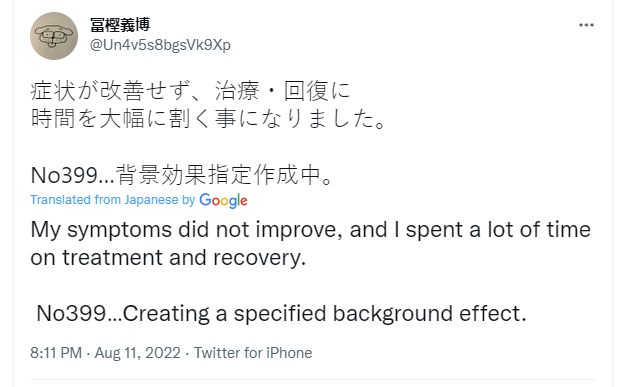 RELATED INTERVIEW: Fan And Professional Translators Speak Out On Western Localization Issues And The Current State Of The English Manga Industry

The primary source of Togashi’s symptoms, as well as the main reason for his hiatus, is the mangaka’s sever lower back troubles, which have gotten so progressively over time that he would note in his author comments in Shonen Jump Issue 29 2016 (Chapter 358), “I could draw in the prone position in my 20s. But now I can’t because of the stiffness of my body.” 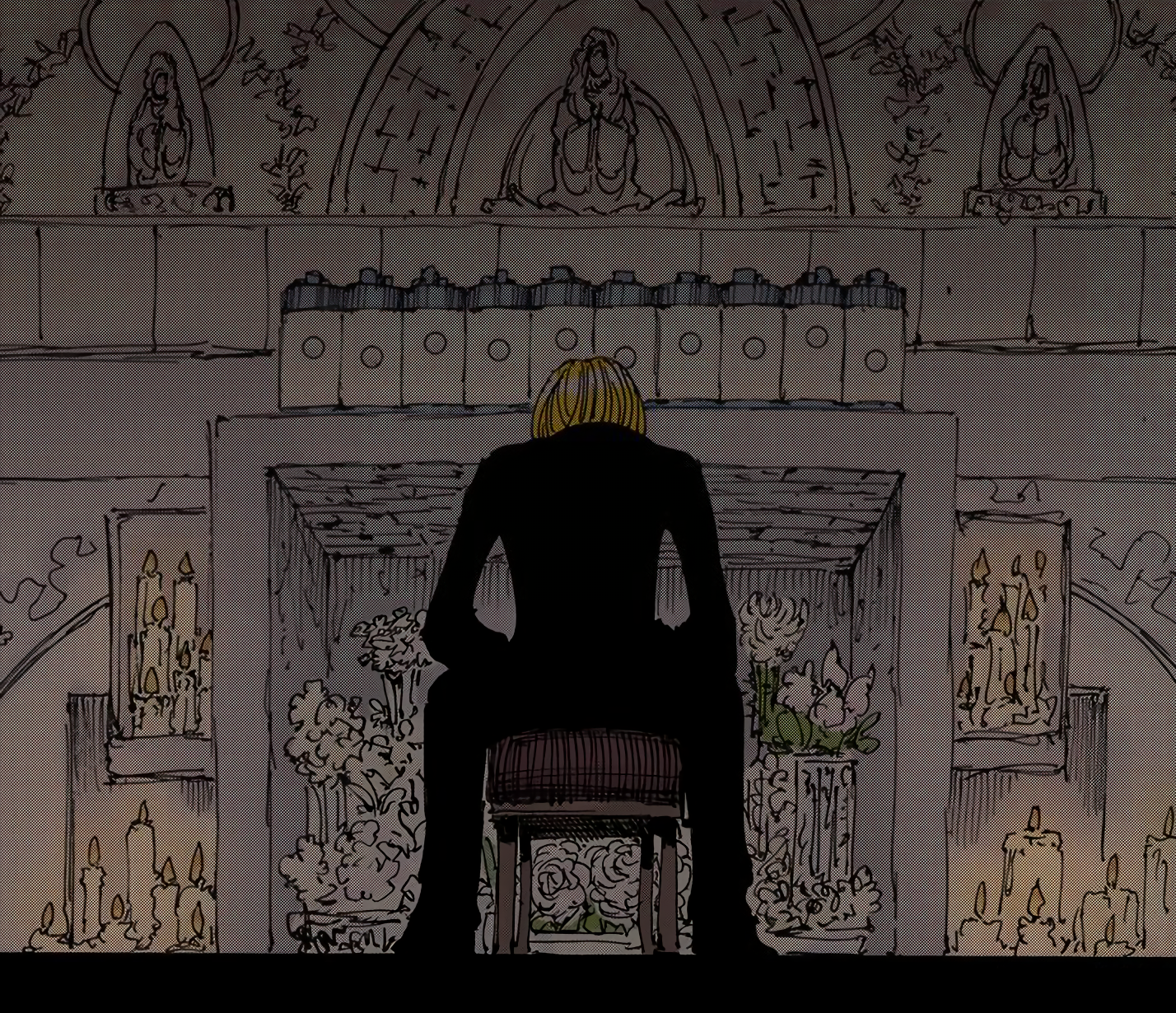 Togashi raised even more concerns amongst fans the following day when he informed his followers, “I’ve managed to draw 1 panel. I’m having trouble in putting strength into my right hand.”

On August 15th, the mangaka noted that while he had “finished writing out a final copy of characters’ dialogues,” he felt “more burdened now that the process of drawing my manuscripts is half-digitalized.”

Around the time Togashi stopped including images and his recent bout of pain began to set in, the mangaka switched to the digital portion of his drawing process. 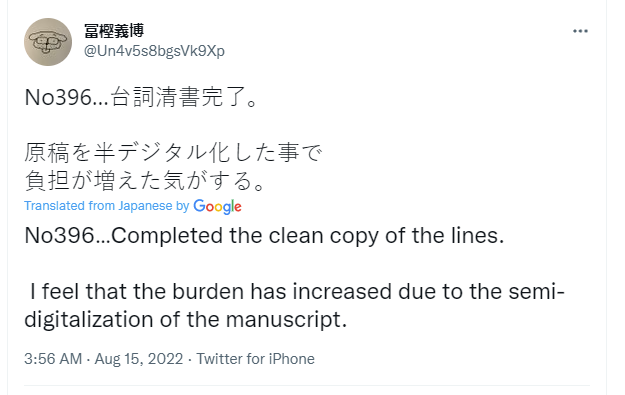 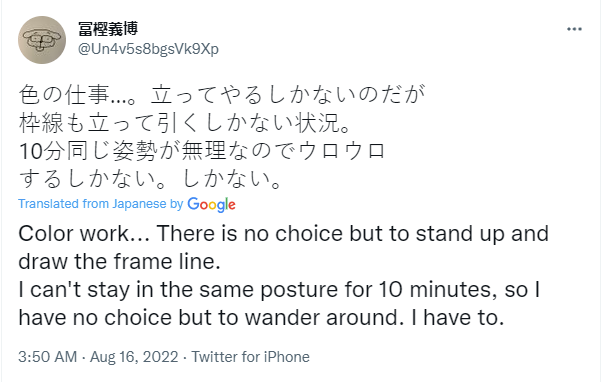 As of this writing, Togashi’s most recent tweeted that he has “been roaming around.”

This brief update has led some fans to speculate that his pain has progressed to the point where he might not even be able to hold a pencil without it being a struggle.

These latest tweets from Togashi follow a public statement, released in July in commemoration of his receiving an art exhibition at Tokyo’s Mori Arts Center Gallery, wherein he thanked fans for their support and playfully cautioned them to take care of their own bodies.

“I am pleased to announce the Yoshihiro Togashi exhibit-PUZZLE-..” Togashi announced. “Allow me to express my sincere gratitude to you all. This was only possible thanks to the warm feelings and support of the readers. That was stiff of me, huh? I think so too.” 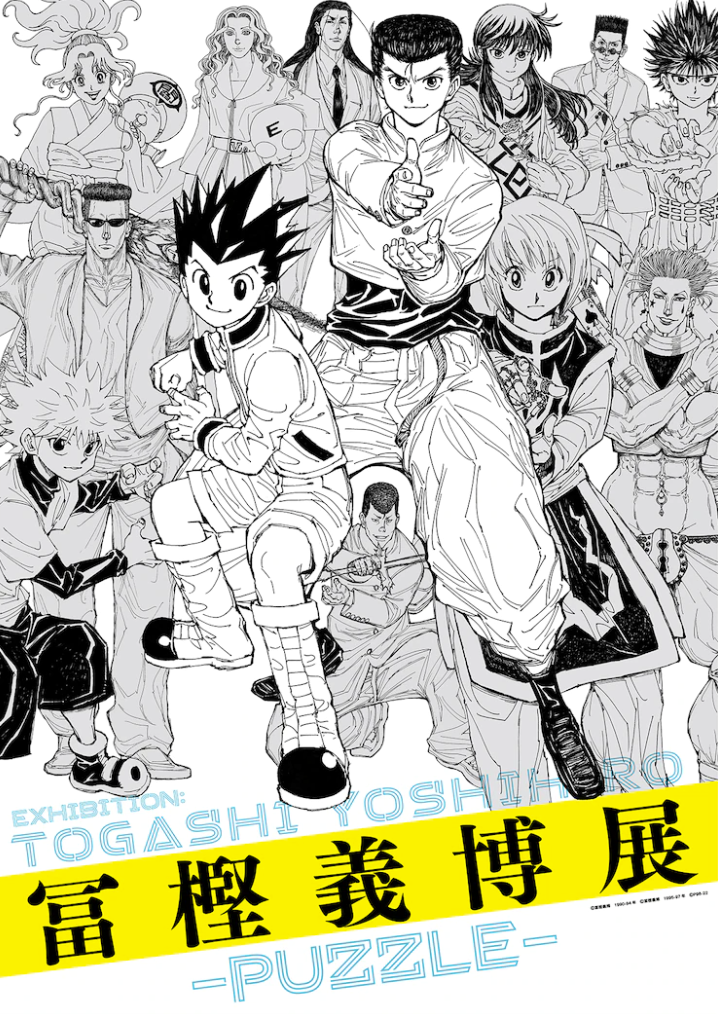 “You’re probably thinking, ‘Go draw the next chapter already,'” he continued. “True, I was unable to sit in a chair for two years, which made me unable to draw, but by throwing conventional methods to the wayside, I’ve been able to resume drawing somehow.”

“Everyone, I sincerely ask you to take care of your backs and hips,” Togashi said. “Just two weeks before writing this message, I couldn’t get into position to wipe my butt and had to take a shower every time I pooped. It takes 3-5 times longer for me to do everyday movements. Your hips are important.” 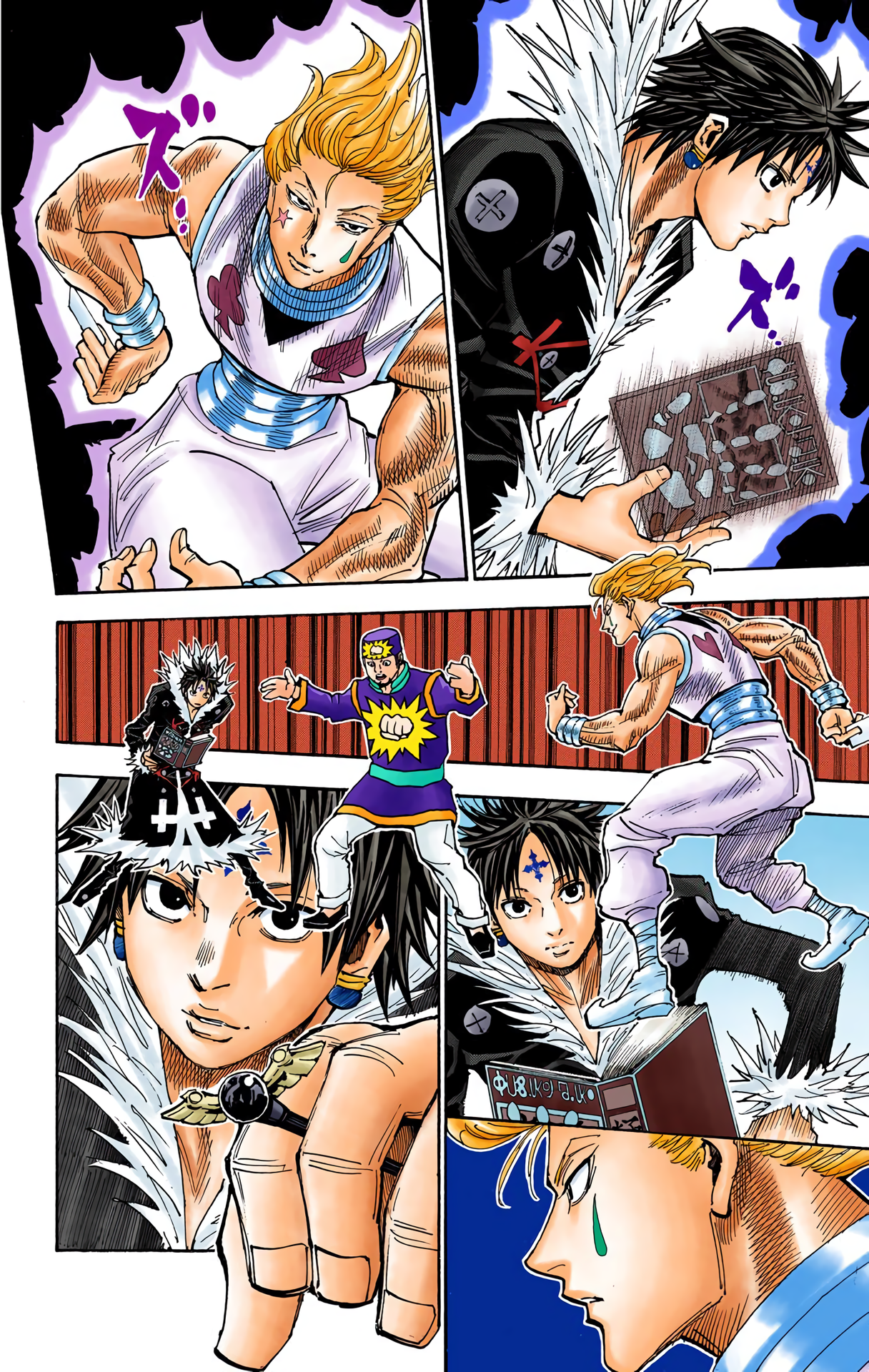 In conclusion to his statement, Togashi suggested, “So if you’re at the exhibit and you happen to drop something, I recommend assuming a sumo crouching posture when you pick it up.”

Alongside the statement, Togashi drew not only a tiny guide to performing the sumo crouching posture, but also a self-portrait which provided a tragic insight into how his ability to draw had been drastically effected by his back pain.

The illustration sees the mangaka depicted as an anthropomorphic dog who is lying down on its back with a pillow to prop him up while drawing. Togashi noted in his caption to the portrait that “currently, I can only draw in this position.” 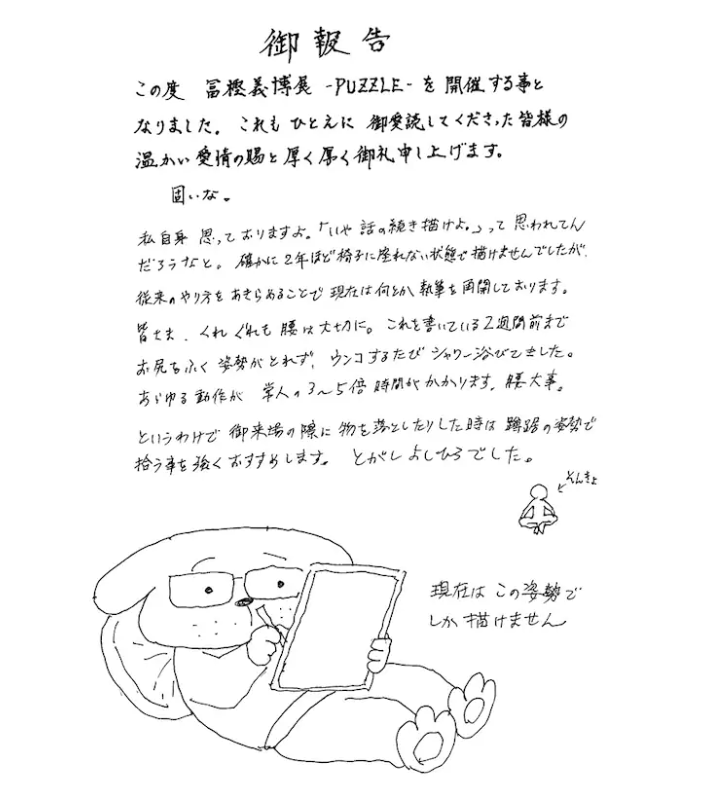 Regarding his current workload, Togashi told fans on July 25th that he was, at least at the time, planning on producing an additional ten chapters on top of his previously promied ten for a total of twenty new chapters – or roughly two collected volumes worth – of Hunter x Hunter.

“About characters, I have finished the inking process over pencil drawing for ten chapters!” Togashi announced. “There may be some fixes, though. I’ll continue drawing my manuscripts for the next 10 chapters. Plus, I’ll announce how inking whole chapter is proceeding. I have tons of drafts”