Actor Shia LaBeouf recently had a discussion with Bishop Robert Barron, the former auxiliary Bishop in the Archdiocese of Los Angeles and the current Bishop of the Diocese of Winona-Rochester in Minnesota, where he discussed his conversion to Catholicism as he began to prepare for the role of St. Padre Pio in a movie about the saint’s life by director Abel Ferrara.

LaBeouf and Barron began their conversation with a brief discussion about acting and the experience of the Latin Mass, but it eventually turns to LaBeouf’s conversion journey.

The actor bluntly reveals his life was not in a good place and intimates he was contemplating suicide before he accepted the role of Padre Pio.

“I walked into this, my life was on fire. I was walking out of hell. It wasn’t like I willing came in here on a white horse singing show tunes,” LaBeouf explained. “I came in here on fire and I didn’t want to be an actor anymore. My life was a mess. A complete mess. And I’d hurt a lot of people. I felt deep shame and deep guilt. I didn’t like to go outside much. I had a yearning not to be here anymore. I was on my way out.”

“My opinion about God before this happened, before the pain struck, before my world had crumbled, was art, love and God, they all mean the same thing,” he said. “They’re synonymous. As an artist who creates art, I found myself in a godly position often, right, where I was in charge.”

LaBeouf continued, “I had also been told my whole life like your life is your life. You have to make with it what you can. You got to be a good guy and then you got to get married and then you got to get a house and get a job and do good at your job. Like your life is your life. Things will work out if you put effort in. It’s up to you. And I always really felt that and it made it hard to believe in God because it felt like my managerial skills are going to amount to a fulfilled existence.”

“When all my designs failed, when all my plans went out the window, when my life had led to serious infliction of pain and damage on other people, I threw up my hands like, ‘My plans are garbage and I don’t want to be here anymore, and I have no — that was required to enter Pio,” he said. 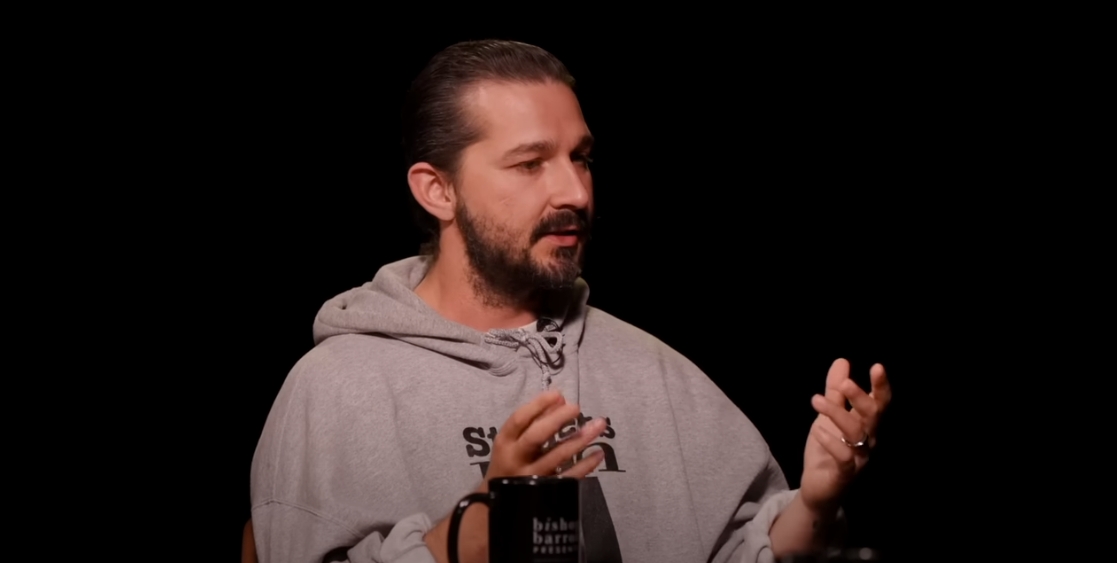 LaBeouf then asserted he believes that God drew him to the role and his conversion before detailing his journey step by step, “This is why it feels like celestial mathematics or some kind of divine— it feels way too coincidental to be a coincidence. But my life was completely, like I told you, on fire. And I’m in a spiritual program where I go on Zoom and we have meetings and another person that was in this meeting who’s also part of this same fellowship of the down and outs was a man named Abel Ferrara.”

He continued, “And he wound up seeing me in the meeting. We shared sensibilities. We had heard each other share a few times and then he wrote me in the chat box, ‘Do you know about Padre Pio?’ And of course I didn’t know anything about Padre Pio.” 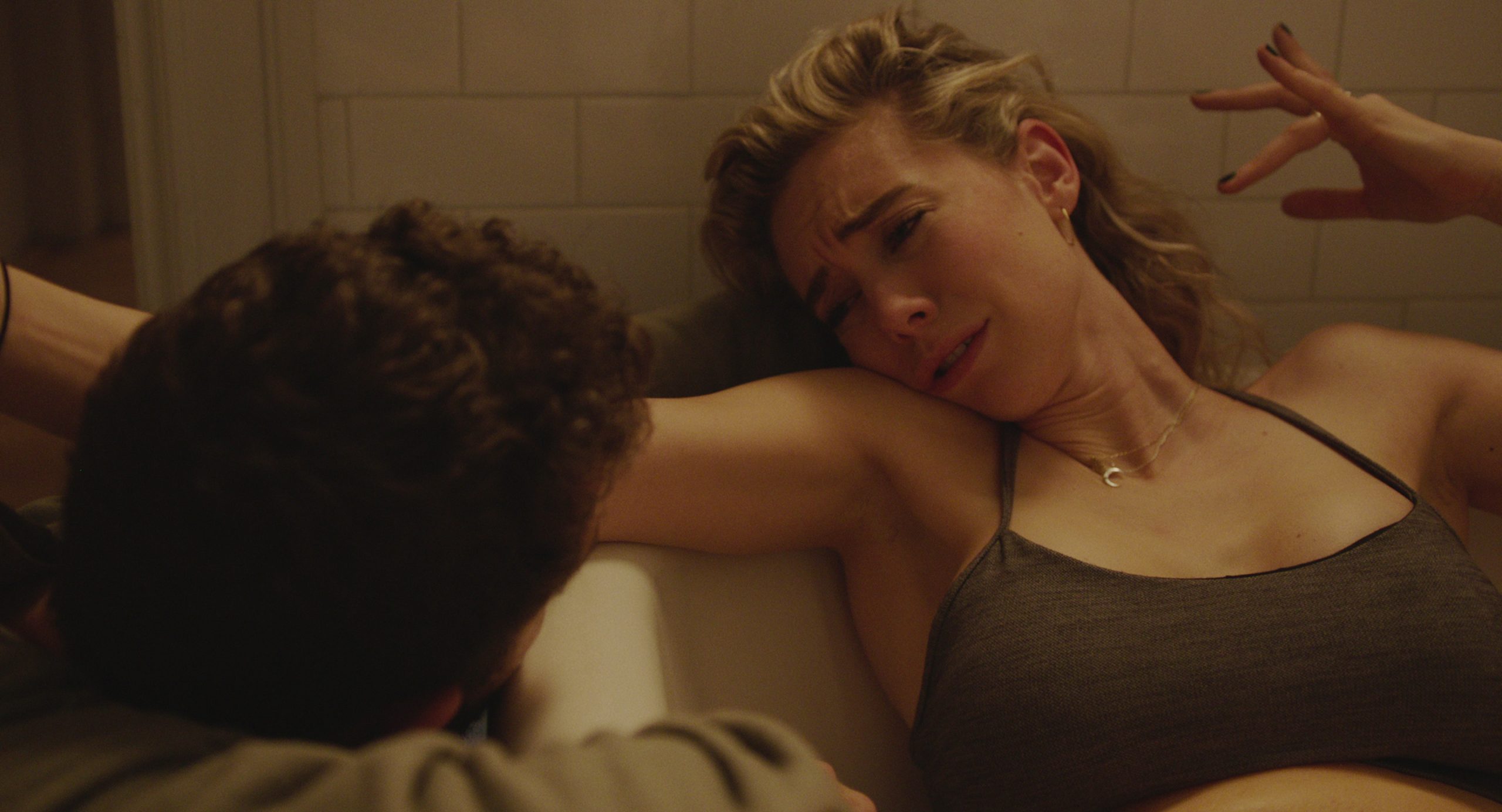 PIECES OF A WOMAN: (L to R) Shia LeBeouf as Sean and Vanessa Kirby as Martha

LaBeouf goes on to detail he saw the opportunity to play St. Pio as a way to resurrect his career, “The fact that there was this director reaching out to me — because at this point I’m nuclear. No one wants to talk to me including my mother. The manager’s not calling. The agent’s not calling. I’m not connected to the business anymore.”

“So the fact that this man reached out me felt like something like in my egoic mind, ‘Wow! This is a miracle! This is my chance.’ And so my ego shows up and now I’m like, ‘Yeah, well Padre Pio.’ And my ego is what makes me research Pio,” he relays. “It’s not my Catholicism or my yearning towards God.”

He was then instructed to find a seminary in order to research Padre Pio. He took the opportunity and visited the Capuchin friars in San Lorenzo. Not only did he visit them, he details he lived in his truck in their parking lot.

Describing his time at the Province of St. Mary of the Capuchin Order, he said, “I’m falling into a group of men that met me in San Lorenzo, mainly a guy named Brother Jude, who starts talking to me about the Gospel. And he says, ‘Well, if you are going to play Pio you need to read the Gospel.”

“And so I’ve never read the Gospel and he’s reading Matthew to me. … I’ve read all Sam Harris. I’ve watched all the Ted Talks and was really good at attacking Catholicism because it made me feel superior,” LaBeouf said.

Bishop Barron then asked, “So you were kind of agnostic/atheist at the time?”

LaBeouf responded, “Yes, I liked to argue because it made me feel like I was in power. I’d like to be contrarian. I liked to sit with a Bishop and then put you on your heels because that would make me feel powerful, which I find most secular people enjoy. The control of it because so much of life is uncontrollable. To feel in control feels good. So I was that guy.”

LaBeouf then went on to detail a little bit of his childhood and how he did have a Bar Mitzvah when he was 13, but he described it as fake.

“13 and I read it phonetically and my grandmother is happy, and they put me on a chair and that’s my spirituality for a long time. And it felt fake because I never invested,” he elaborated. “There was never any — I had never felt any real suffering in my life. So I didn’t have any willingness to have any belief. So I had no faith.”

Returning to being instructed on the Gospel of Matthew, LaBeouf says, “I read it for the first time and things start to strike me. Like John the Baptist. The story of John the Baptist being a reformed hedonist, being this man who was sort of scraggly and kind of felt like an old western character from — he felt like a cowboy. He felt kind of rustic and strong and masculine.”

“And my opinion of Christ at this point felt almost like I was reading about a Buddhist,” he told Bishop Barron. “Like this very soft, fragile, all loving, all listening, but no ferocity, no romance.”

“So all I know about was this very soft, weak Jesus, which didn’t fit into my idea of masculinity would be,” he said. “My dad was a Mongol biker. It wasn’t appealing to me. But then I read about John the Baptist and it became quite appealing.”

He then detailed, “At that time when I was reading it, I was holding on so tight to a life that was slipping away through my hands to a 35 years of management. The Gospel gave me this invite to just let go. ” 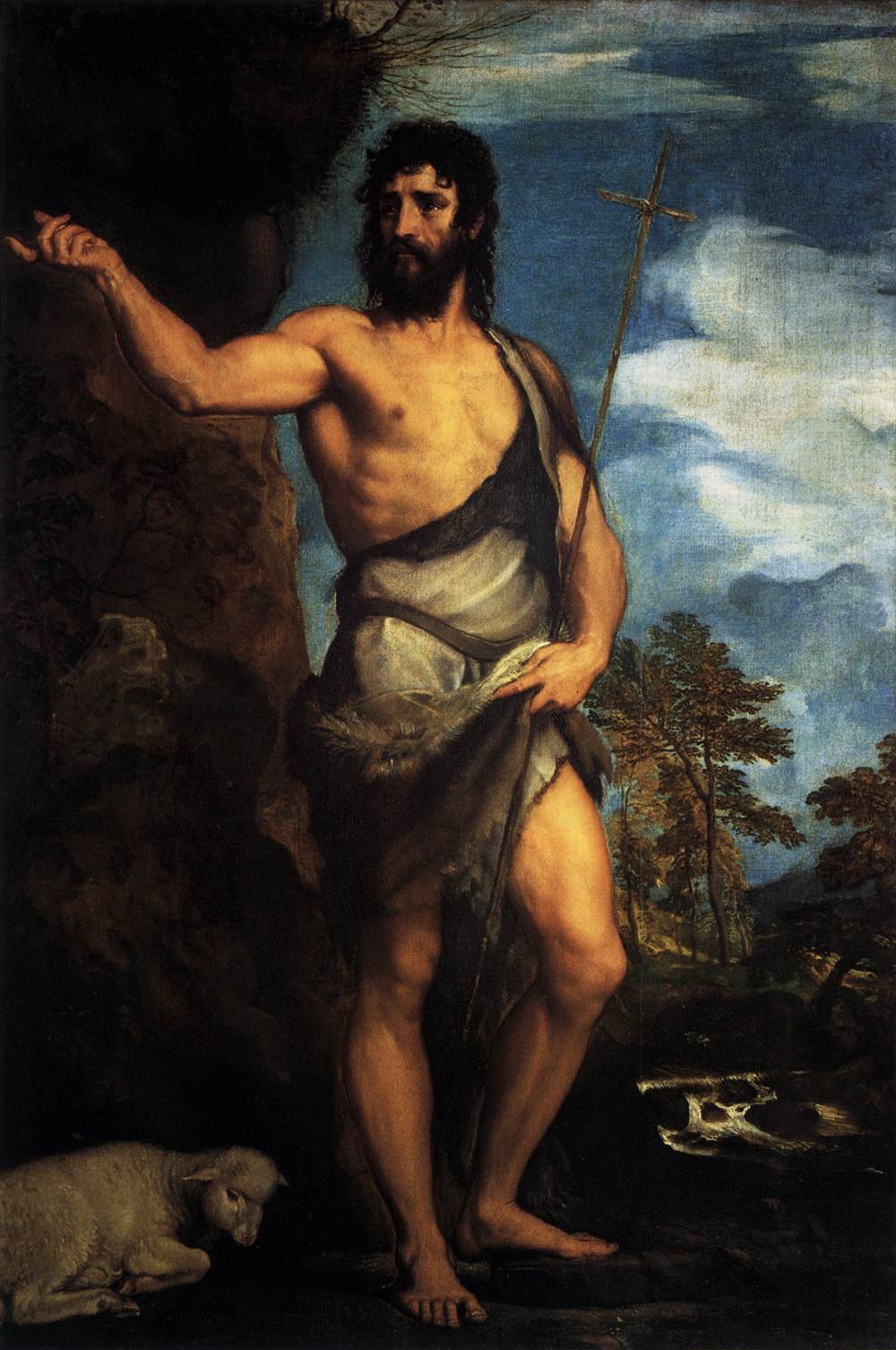 LaBeouf then returned to his mental state before and at the beginning of his St. Padre Pio, “I had a gun on the table. I was out of here. I didn’t want to be alive anymore when all of this happened.

“Shame like I had never experienced before,” he revealed. “The kind of shame you forget how to believe. You don’t know where to go. You can’t go outside to get like a taco. You don’t want to go anywhere.”

The actor went on to detail that his research into St. Padre Pio for the film and his subsequent dive into the Gospel stopped being about the film.

“It stops being this like prep of a movie and it starts being something that feels beyond all that and I stopped sending videos. Like at a certain point with Jude I just really fall in. And then I meet these women, The Sacred Heart Sisters, who starts really catechizing me in a very real way. In a very like, ‘Let’s go through it. Let’s talk about it paragraph by paragraph.’

He continued, “And what happened was also happened to be a meeting at the church for this other spiritual program I am in right next door to Sister Lucia’s. So I wake up in the morning 9 am. I go to my meeting. Then 10 am I’d be with Sister Lucia, and then 11 am I’d be with Brother Jude. And then 12 I’d be with Father James who’s now in…”

After detailing how the brothers welcomed by being his friend and telling him jokes and sharing laughs with him, LaBeouf again reiterated what his mental state was like before he arrived, “This was the last stop on the train. There was nowhere else to go in every sense. I know now God was using my ego to draw me to him, was drawing me away from worldly desires. It was all happening simultaneously. But there would have been no impetus for me to get in the car and drive up here if I didn’t think, ‘Oh I’m going to save my career.'” 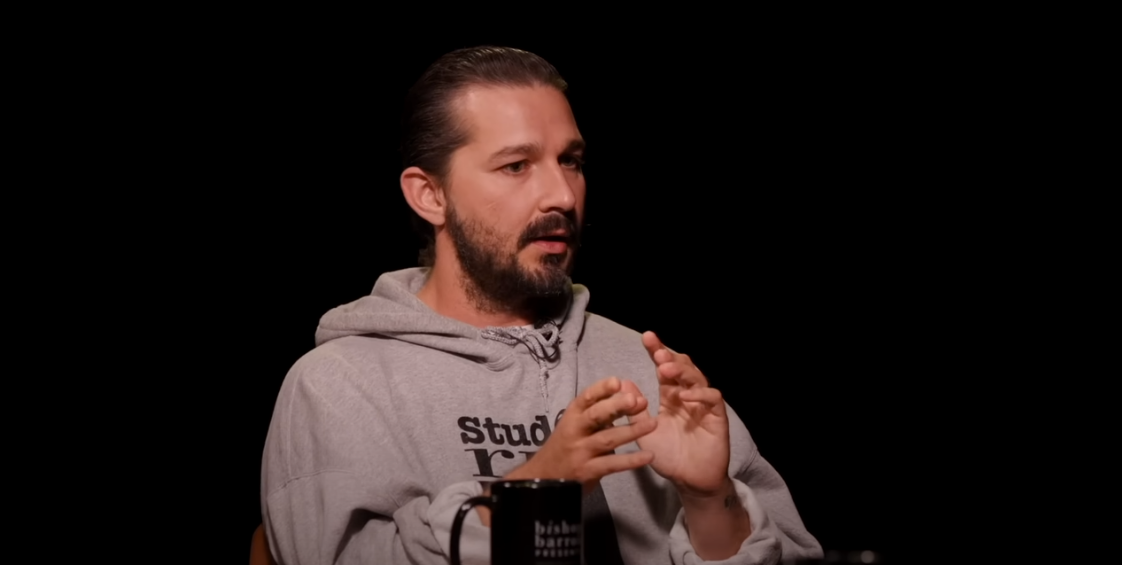 LaBeouf goes on to detail how he learned to pray and the value he finds in praying the Rosary. In fact, he details while praying the Rosary he’s inspired to call his mother who wanted nothing to do with him following numerous headlines about his depraved behavior.

He ends up calling his mother and letting her know that he loves her and he is safe. After the phone call, he reveals he felt at peace given he had been feeling animosity towards his mother because he felt she had dipped on him. 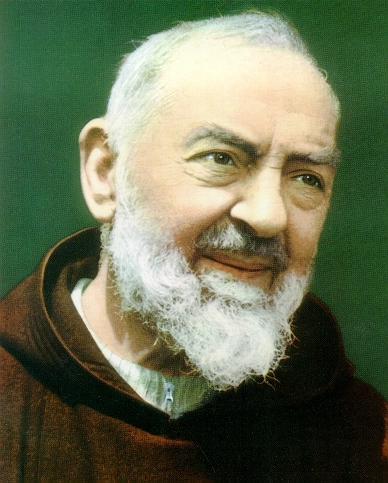 LaBeouf also discusses eventually learning about St. Augustine, St. Francis, and St. Padre Pio and how he discovered “offering your suffering up as purposeful as intrinsically valuable.” That also leads into a discussion about detachment, attachment, ego, and addiction.

The two also discuss the difference between weakness and meekness and the advice he received regarding his portrayal of St. Padre Pio.

What do you make of LaBeouf’s conversion to Catholicism and his revelation that he is part of God’s plan?