Due to the fact that it’s a day ending in “y,” another celebrity has decided to capitalize on the incentivization of victimhood culture in an attempt to score points with her own echo chamber. That person just happens to be actress Erin Moriarty, who has some claim to fame for portraying Starlight in Amazon’s over-the-top superhero commentary series The Boys. 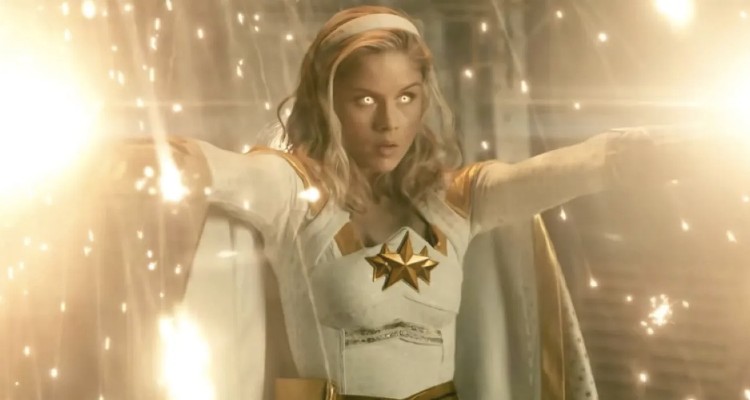 Starlight unleashes her power in ‘The Boys,’ Amazon Prime Video

Moriarty read from the script note-for-note when she called out “misogynistic trolling” supposedly directed at her by fans of the show. She shared an Instagram article entitled #IstandWithStarlight?: The betrayal of Erin Moriarty by The Boys ‘fans.’ The article, shared by Instagram account butcherscanary, lamented the fact that certain fans had not “learned the lesson” the series was trying to portray. 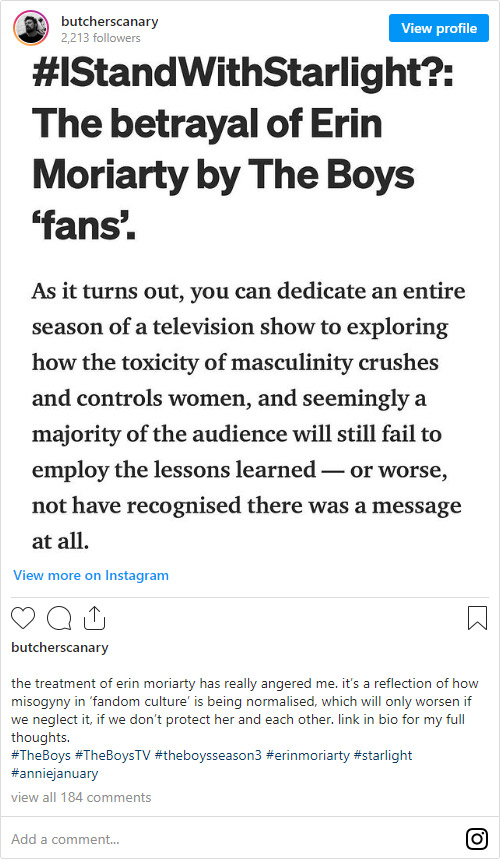 Interesting talk, given the show’s rabid, obscene and exploitative sexual content, most prominently featured in the season 3 episode ‘Herogasm,’ not to mention the depiction of overt, blatant on-screen bestiality between the character Deep and an octopus.

Regardless, Moriarty was quick to chime in, adding “I do feel silenced. I do feel dehumanized. I do feel paralyzed. I’ve put blood, sweat, and tears into this role (over & over & over again). I’ve grown UP in this character’s shoes (*emphasis on grown up – we change & evolve mentally AND physically).” 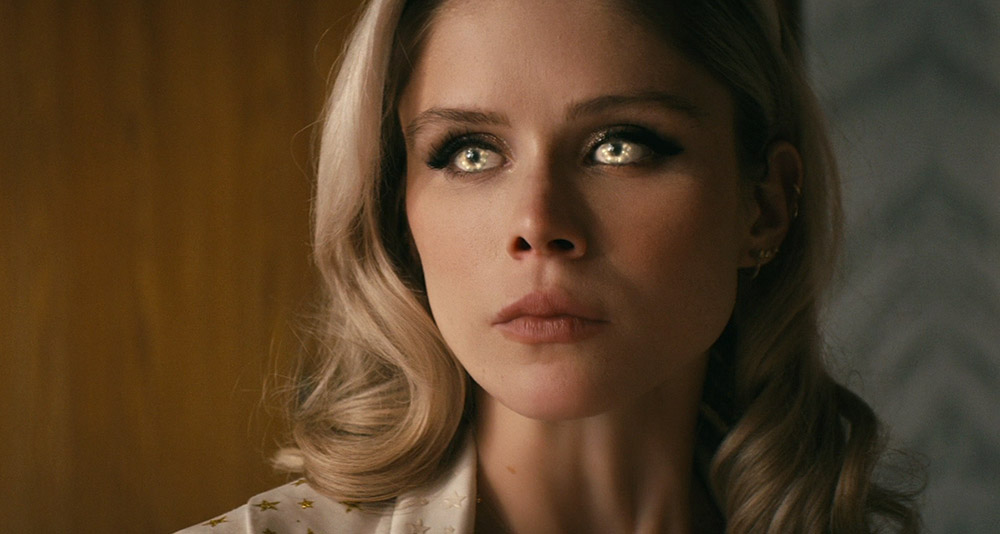 Only, she hasn’t been silenced, otherwise she wouldn’t be saying what she’s saying. Typically, a person is only truly silenced when they are prevented from speaking out, which obviously did not occur here. Nevertheless, this is how our society works nowadays.

This kind of rhetoric is standard issue when it comes to Left-wing celebrity culture, and it has been weaponized in an attempt to boost their own profiles in the hopes of advancing their careers. The most obvious example was the Jussie Smollett racism hoax, driven primarily by the actor’s desire to land more coveted and higher-paying roles.

Perhaps Moriarty has the same agenda, or perhaps her feelings are sincere. If the latter, then the question must be asked – what exactly should be done about it? 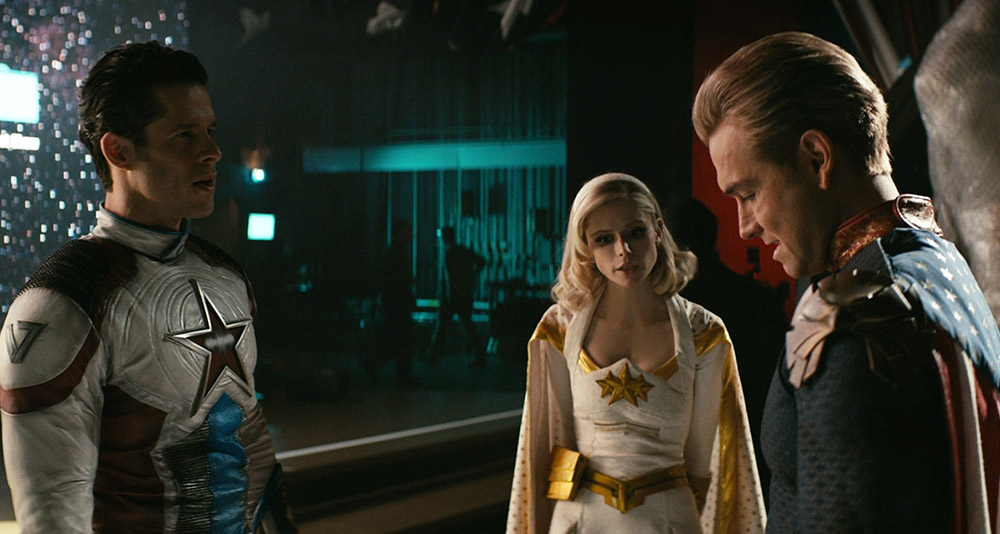 She went on to speak about the Instagram article, saying “this does break my heart – I’ve opened up a vein for this role and the misogynistic trolling is exactly what this role (Annie) would speak out against.”

She then added “everyone’s going through their own battle(s); let’s not add to that. I will never intentionally (and ESPECIALLY) publicly, add to yours. This has only strengthened my empathy muscle and to anyone who comes at me: I see you, I don’t hate you, I only empathize and forgive.” 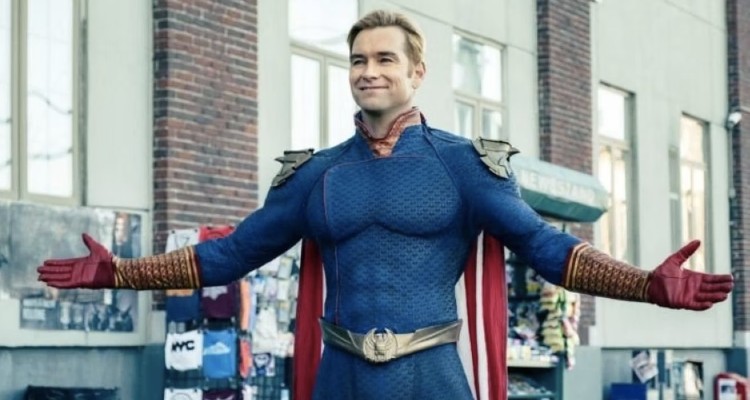 RELATED: The Most Powerful Characters In The Boys

Homelander actor Antony Starr ran to the actress’s defense, chiming in with “support you and what you say here 100%. Well put 😉 Your work on the show is and always has been stellar and you are beautiful inside and out. Keep shining 😉 xo.”

Fine words, but they don’t offer a solution to the perceived problem. Anyone who has spent more than five minutes on a social media platform is well aware of the toxicity. Nefarious human beings capitalize on the anonymity of these platforms to spew garbage they would never dream of saying to a person’s real face. 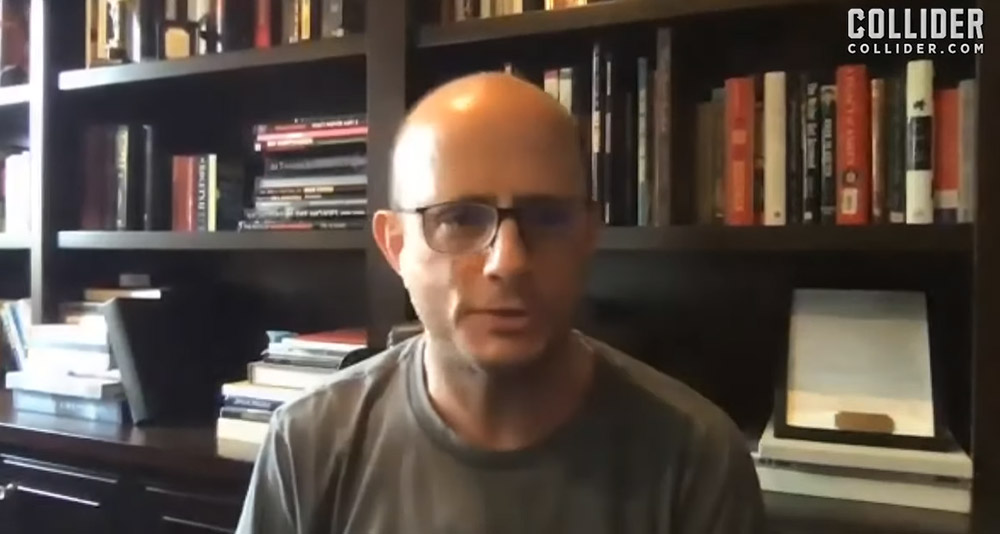 Series creator Eric Kripke also seized the moment to offer his own take on the Moriarty issue, attacking these supposed toxic fans with “Be kind. If you can’t be kind, then eat a bag of dicks, f*** off to the sun & don’t watch ‘The Boys,’ we don’t want you,” which is the typical response from low-brow modern Left-wing “creatives” – swear and yell at people while demanding they be kind to you.

As most actual fans already know, the current trend is for Leftists to create a show with overt political messaging, then pounce on a handful of troll comments on social media, and use them as an excuse to spew hatred and seething vitriol at the fan base in general. The appropriate course of action would be to ignore these few individuals altogether, but that would rob them of the chance to virtue-signal. 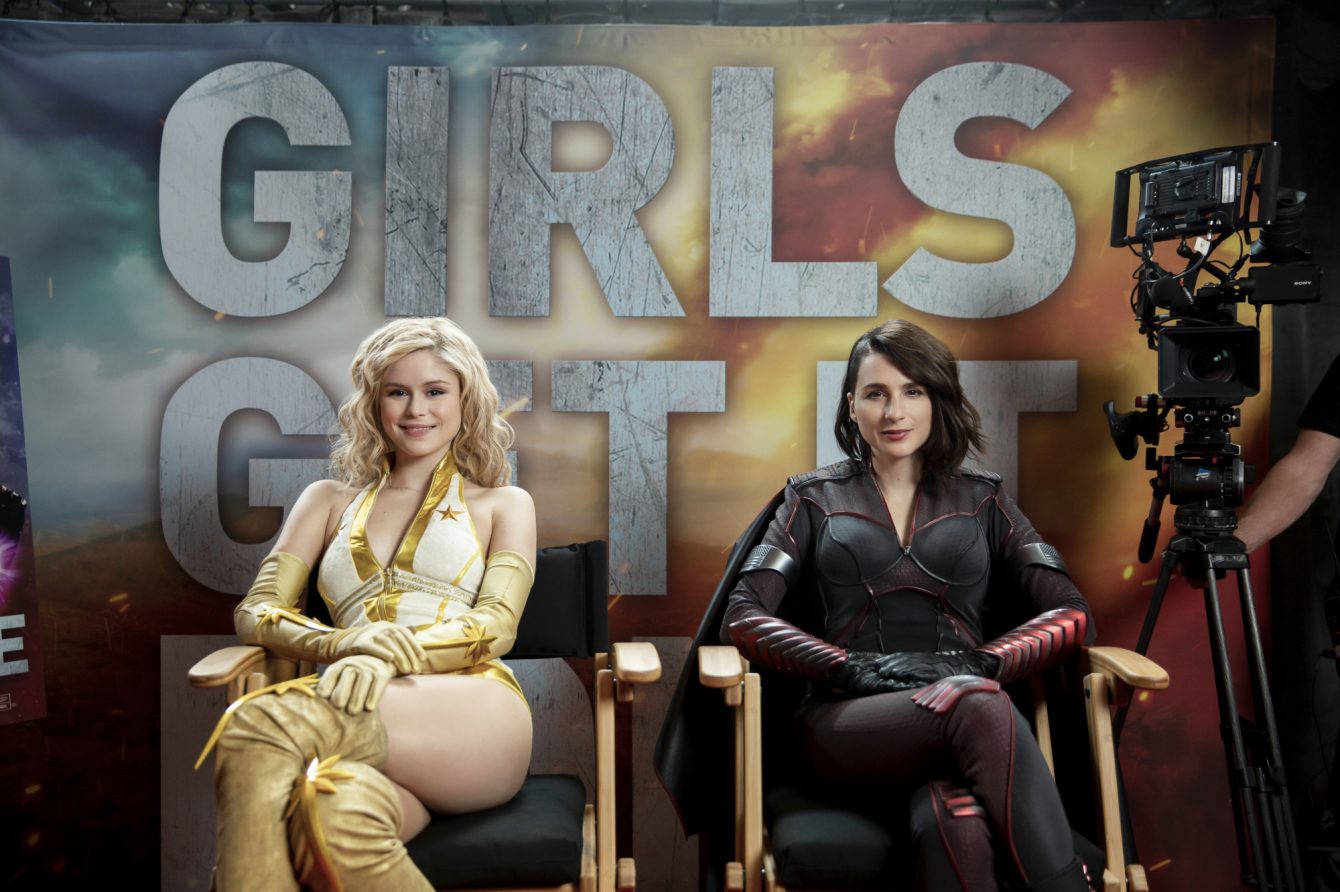 Starlight and Stormfront on a filming set in ‘The Boys,’ Amazon Prime Video

In fact, any target of online social media harassment should simply move on, but the current state of our Western culture won’t permit it. The incentive structure is such that victimhood status is now viewed as noble, virtuous and good. Of course, it isn’t. Victimhood is psychological poison, and those who perpetuate and encourage it are guilty of making the problem far worse, and exacerbating mental illness.

Nevertheless, the political and social Left use victimhood as a gauge of merit and integrity. The greater your victimhood status, the more virtuous, courageous and wonderful you are as a person. That’s a far cry from the days when female rape victims refused to call themselves victims, but rather, “survivors” and “fighters,” which is actually noble, courageous and brave. 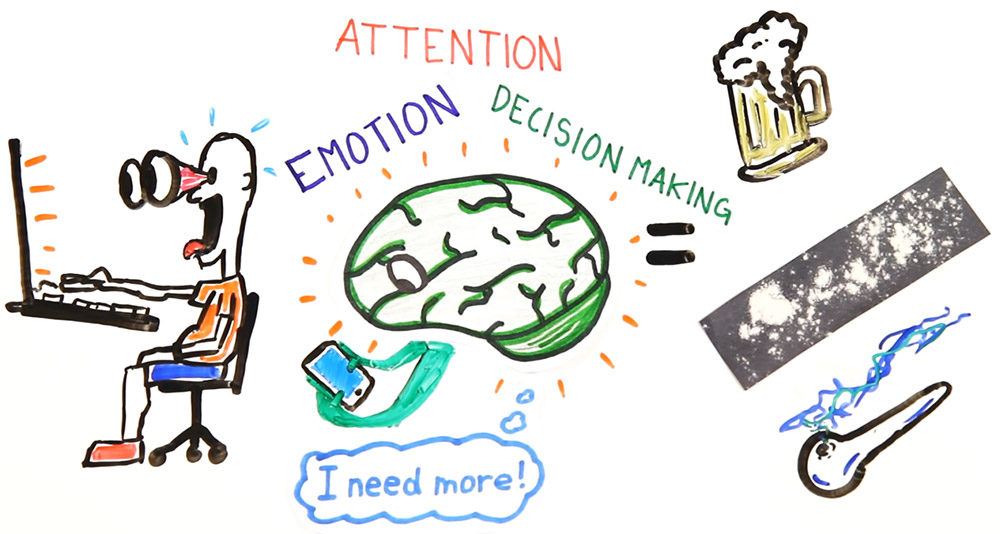 As long as victimhood culture is rewarded, the incentive structure will not change, and more celebrities will capitalize on it in an attempt to gain clout and exposure. I stress once again that Erin Moriarty may indeed be sincere in her feelings, but there’s no denying that she’s more inclined to feed victimhood culture, given the way so-called “victims” are rewarded for it.

Of course, she could simply shut off and/or ignore social media, which is what many celebrities have done in recent years. In 2020, the National Library of Medicine unveiled a study on the negative effects of social media, and the drug-like effects it can have on the human mind, which lead to aggravating mental health issues. 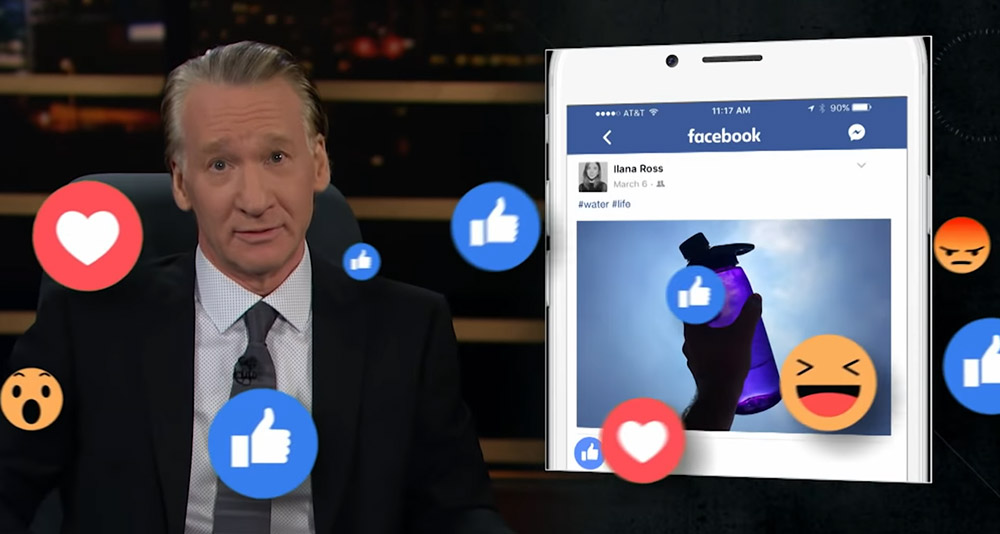 ‘Social Media is the New Nicotine’ from Real Time with Bill Maher, YouTube

RELATED: The Boys Most Shocking Moments

The true irony, of course, is that Erin Moriarty undoubtedly has far more true fans than she does so-called “toxic” ones. In our current culture, people are taught that everyone must like you, and say nice things about you at all times, and if not, then society needs to change. That’s not being brave; it’s being an abject coward.

The “fix” typically either involves whining about the problem, whilst offering no solutions, or going for the extremes, such as mass censorship and suppression. The most obscene and ridiculous example of this was a recent decision by the Supreme Court of New South Wales, which held social media companies liable for their users’ comments, effectively branding them publishers, rather than platforms. 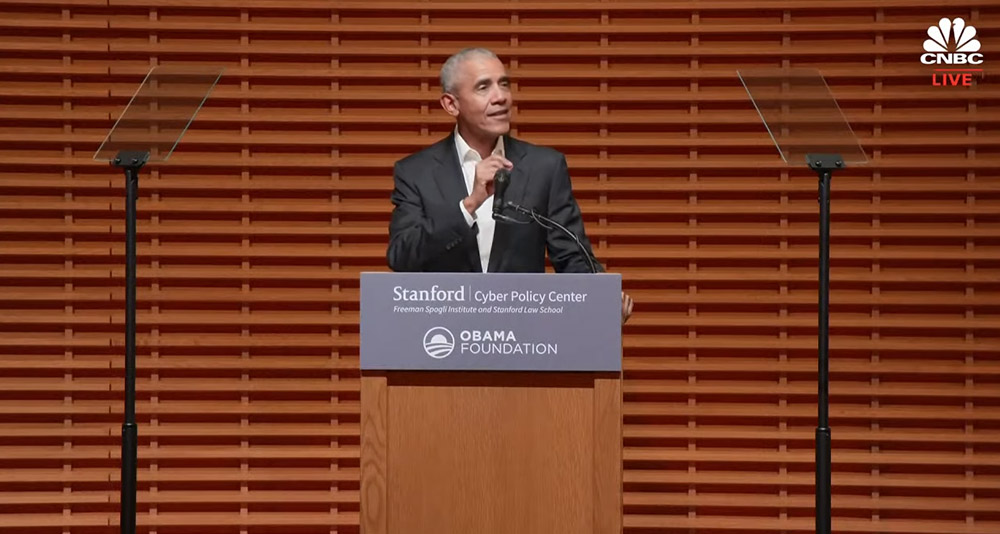 Similar laws have been proposed in different countries, which would make it illegal for anyone to say anything mean about anyone, for any reason whatsoever. The victimhood culture perpetrated by weak-willed Left-wing celebrities and cultural figures is an open door invitation for the oppressive hand of big government to clamp down on freedom of speech, all under the seemingly noble guise of protecting people.

As it stands, victimhood culture continues unabated, driven by the likes of Erin Moriarty, Moses Ingram and so many more. While there’s no justifying mean-spirited, racist, misogynist or otherwise wicked comments directed at other people, there also comes a time when individuals need to realize that a few mean words uttered by anonymous nobodies in bedrooms and basements do not dictate who they are. 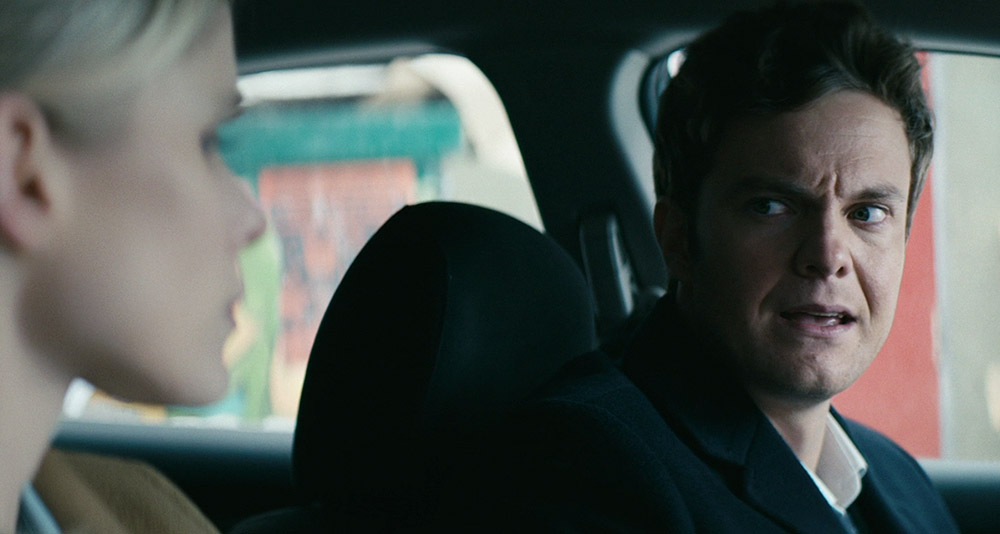 Hughie and Starlight in ‘The Boys,’ Amazon Prime Video

In other words, it’s only true if you believe it.

NEXT: The Boys Star Karen Fukuhara Claims To Have Been Victim Of Anti-Asian Hate Crime: “These Perpetrators Need To Be Held Accountable”