As the climactic battle between the world’s heroes and villains race towards its epic conclusion, My Hero Academia’s green-haired protagonist has found himself tapping into a new level of his plot-important powers in the series’ latest chapter. 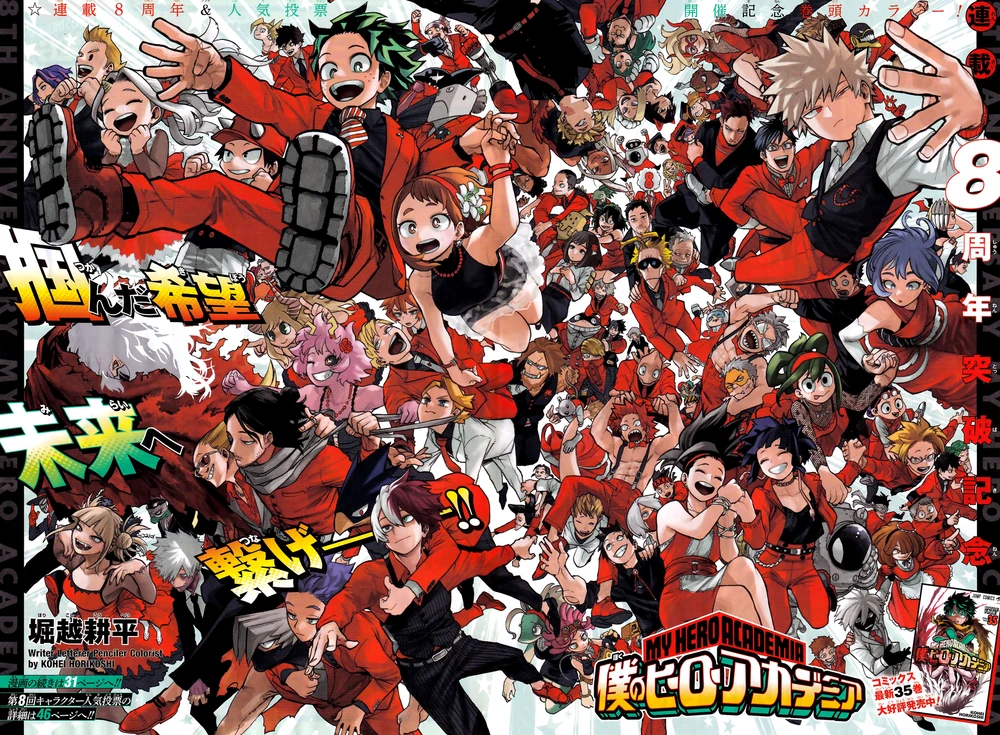 My Hero Academia‘s 369th picks up in the aftermath of Izuku “Deku” Midorya’s arrival to the battle against the All for One possessed Shigaraki. 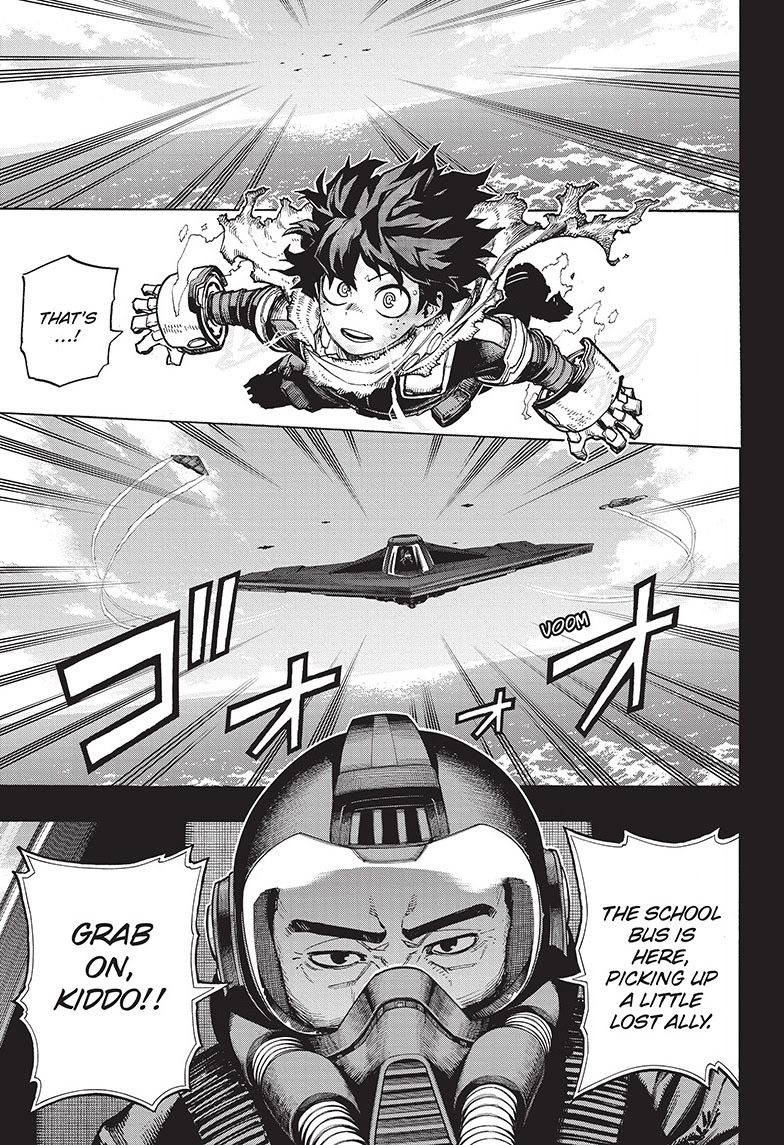 As seen across previous chapters, when our young hero arrives – much to his dismay – he finds that what greets him is not a battlefield of valiant heroes, but rather a scene of absolute caranage.

With his best friend Bakugo seemingly dead on the ground, damaged All Might card beside him, and the other pro heroes on the verge of following him, Deku finds himself horrified to see the damage caused in his absence. 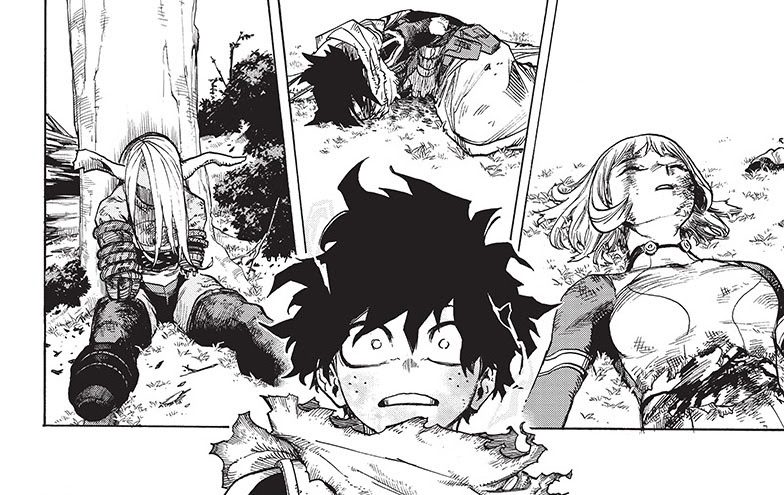 Hoping to take advantage of Deku’s vulnerable state, as the villain finds that “when you stoke this one’s anger, his moves get pathetically simplistic”, All for One proceeds to taunt Deku by blaming his allies’ defeat on his own tardiness.

However, as he pokes Deku to “run from responsibility, All For One’s plan backfires, instead triggering a rage awakening in his opponent. 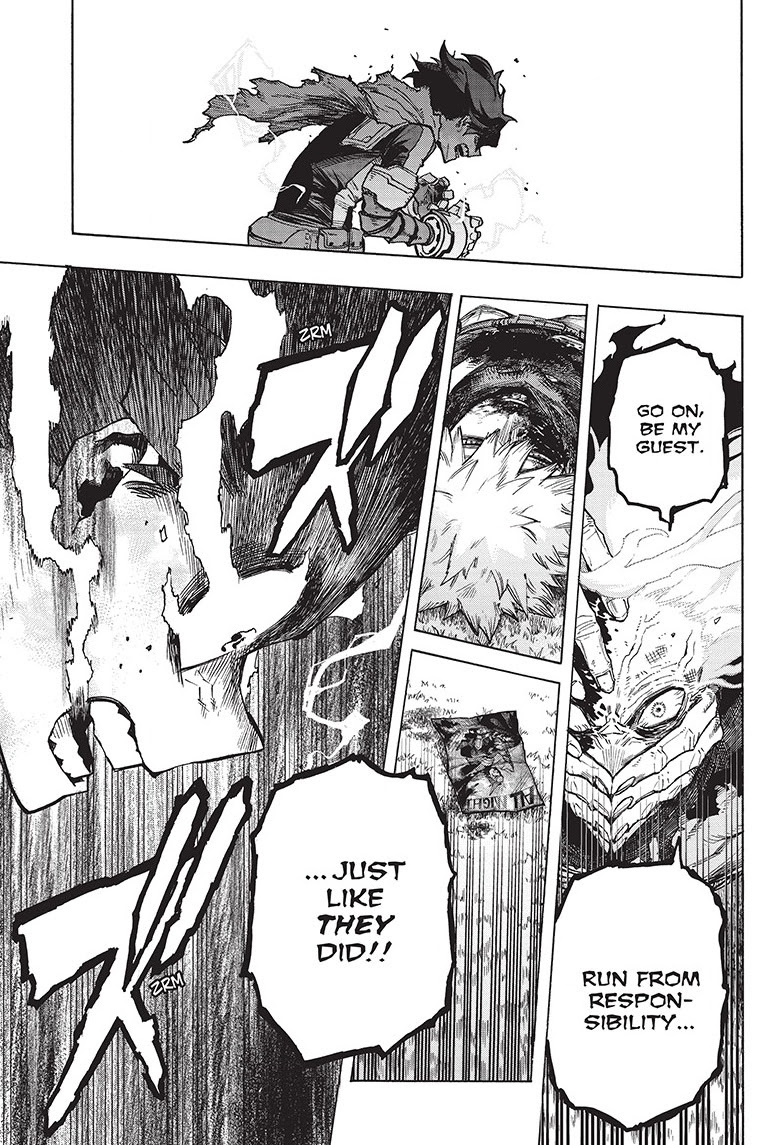 But before Deku can lose himself to his emotions, Lemillion appears to help guilt-ridden hero escape All for One’s mental trap, reassuing Deku that his friends are all still alive and reminding him of the higher standards placed upon them as superheros.

Lemillion’s words in his ears and recalling some past advice from both All Might and the fifth user of One for All, Banjo, Deku is then able to calm down and focus at the task at hand. 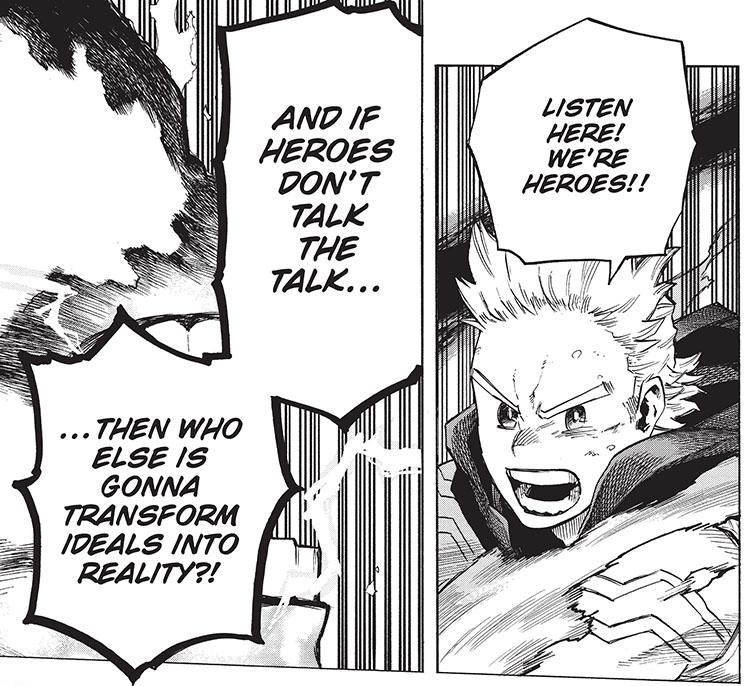 Now with his head in the game, Deku proceeds to begin his battle against All For One proper, starting with a Black Whip-boosted chain attack and following it up with a gear shift into the dangerously powerful abilities of One For All’s second user.

The first hero to take advantage of the power-stockpiling quirk, the as-of-yet-unnamed second user was the leader of a vigilante resistance movement who fought against All For One and his evil empire at the height of their power.

Equipped with the quirk Gearshift, the second user would add his ability to acutely manipulate his own speeds, even in violation of the rules of physics, to One For All’s collective power pool. 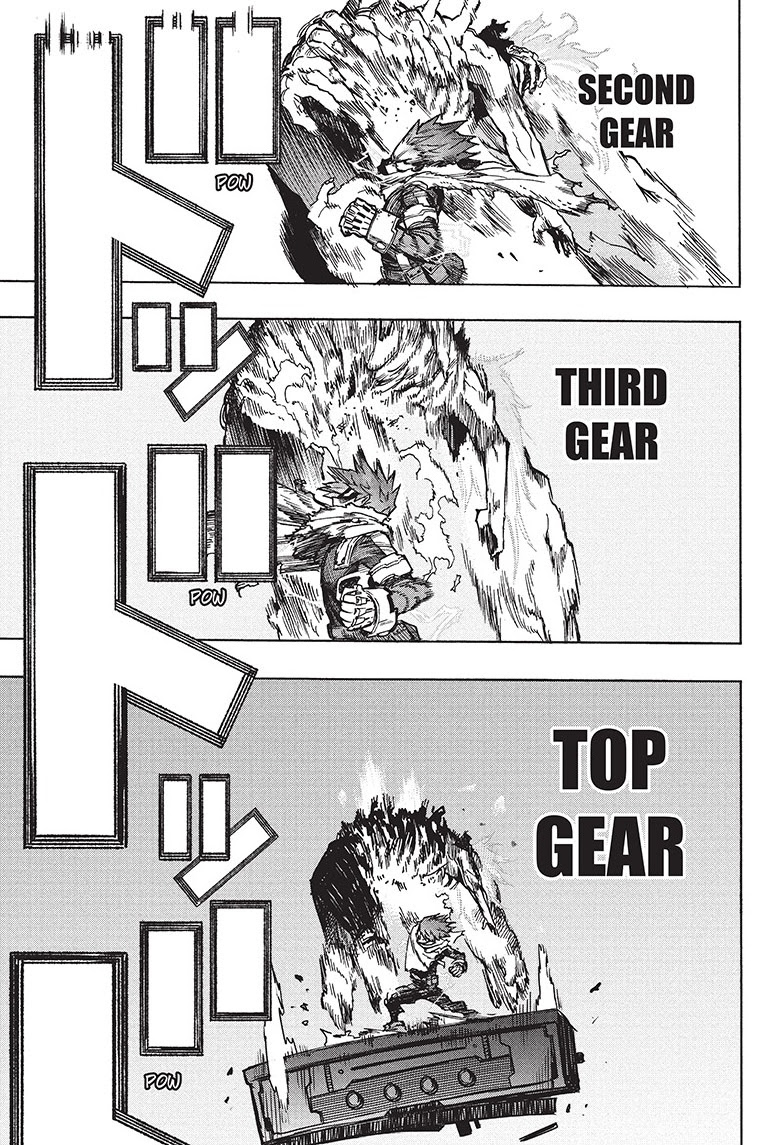 This all builds to chapter 369 proper, where after realizing that Gearshift had evolved at the same rate alongside the rest of One For All’s abilities, Deku proceeds to fuse all of his predecessor’s quirks together – the seventh’s floating, the sixth’s smokescreen, the fifth’s black whip, the fourth’s threat detection, the third’s kinetic energy conversion, the second’s speed, and the base quirk’s pure strength – to hit All For One with the entirety of his power. 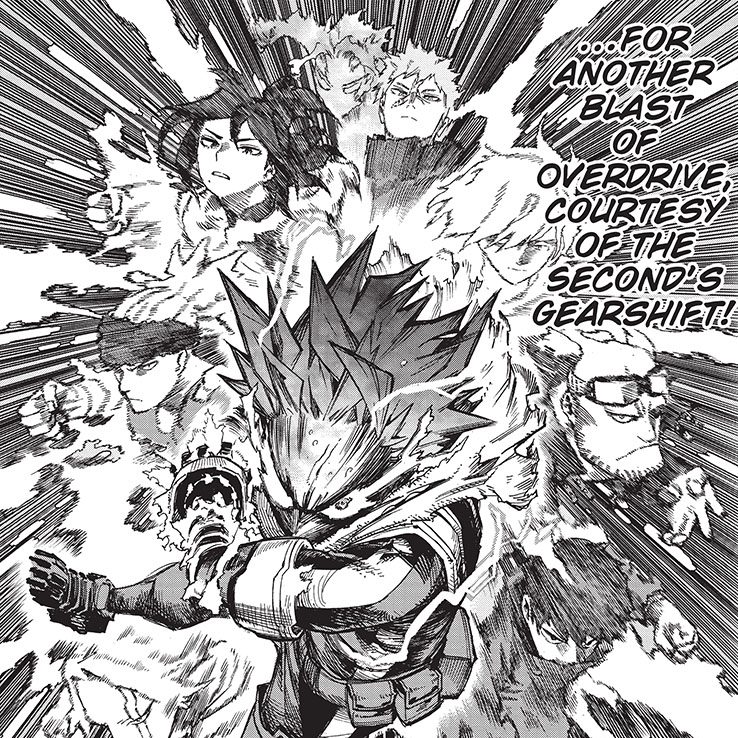 Source: My Hero Academia Chapter 369 “A Chain of Events, Across Ages” (2022), Shueisha. Art and Words by Kohei Horikoshi

Though Deku successfully makes contact with his enemy, unleashing upon him the full brunt of One For All’s power, All For One staggers to his feet, refusing to go down.

As the chapter draws to a close, the villain defiantly cries, “Not yet! Victory is still within my grasp!” 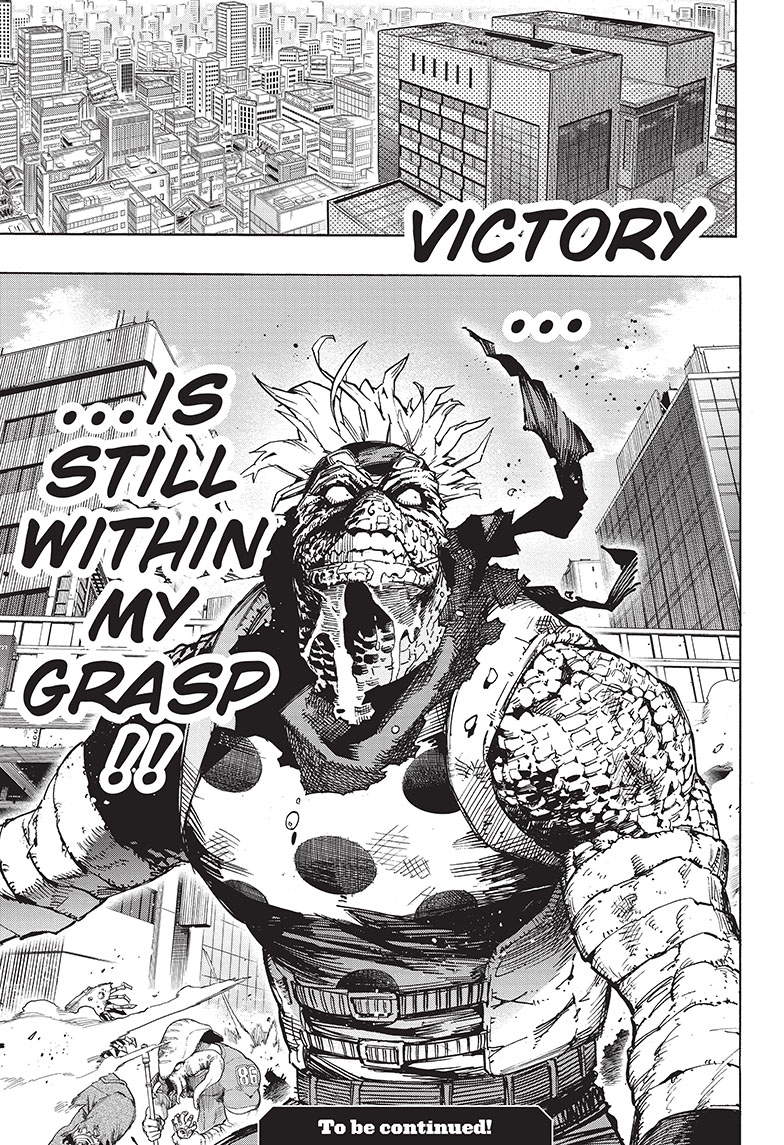 Source: My Hero Academia Chapter 369 “A Chain of Events, Across Ages” (2022), Shueisha. Art and Words by Kohei Horikoshi

As readers may have already deduced given where the series is at current, with All For One’s continued refusal to go down, My Hero Academia is nowhere near reaching the end point previously promised by mangaka Kohei Horikoshi. In light of this, the Horikoshi confirmed to fans that the series would be extending past its original end date.

“It’s been about ten months since I said there was only about a year to go,” wrote the creator in that week’s author’s comments section of Weekly Shonen Jump. “I’m Sorry.”