Eric July, the creator of ISOM, reacted to the release of the new Guardians of the Galaxy Vol. 3 trailer and its introduction of Adam Warlock by claiming his introduction is “utterly pointless” and a “botched opportunity.”

In the newly released a trailer for Guardians of the Galaxy Vol. 3 a first look at Will Poulter’s Adam Warlock is shown off at the 1:28 mark.

RELATED: Eric July Explains Why He No Longer Wants To See His Favorite Marvel Characters In The MCU

July initially reacted to Warlock’s inclusion writing on Twitter, “They have no idea what the f**k they’re doing over there.”

He added, “It’s utterly pointless to bring him in now considering Thanos is gone. Botched opportunity.” 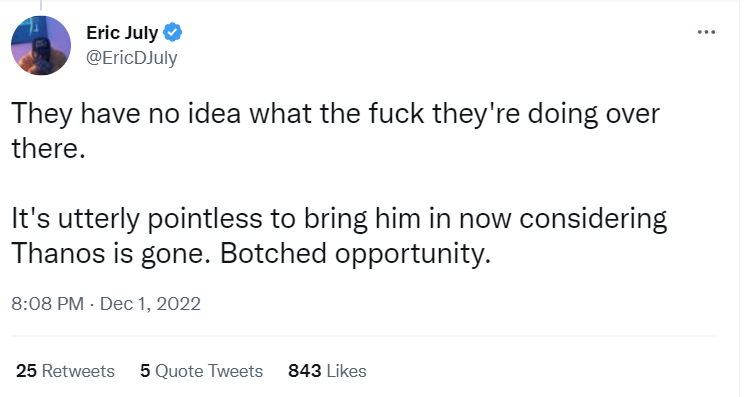 He further elaborated on his thoughts on YouTube saying, “These guys don’t know what they’re doing with some of these characters that get introduced because I do think that there is no true cohesion with the Marvel Cinematic Universe and it hasn’t been for a long time.”

RELATED: Eric July Calls Out Actors Who Take On Race And Gender Swapped Roles: “These Guys Have Absolutely No Integrity”

Specifically turning his attention to Adam Warlock’s appearance in Guardians of the Galaxy Vol. 3, July said, “It doesn’t look too good. You’re completely correct. That’s not even what I want to focus on. That’s the layup. That’s the easy part.”

He went on to cite his tweet and then elaborated, “I called it a botched opportunity when it happened. I don’t think Warlock was one of those characters that was tied up in some of the rights issues that they had because they alluded to him existing in a previous Guardians of the Galaxy movie.”

July continued, “And when you consider who Adam Warlock is, what he is essentially known for — in the comic books to have Thanos there and not utilize the character when you introduce them was moronic. That was a drop the ball completely and it was a botched opportunity.”

For those not familiar with Warlock’s comic history. He first appeared in Fantastic Four #66 as Him, and a few years later would be introduced as Adam Warlock in Marvel Premiere #1.

He would go on to play a prominent role in the Infinity Gauntlet storyline showcasing him as one of Thanos’ primary foes. He would orchestrate a final battle against Thanos to deprive him of the Infinity Gauntlet albeit his initial plan to have the Silver Surfer snag the Gauntlet as he attacked Captain America failed. 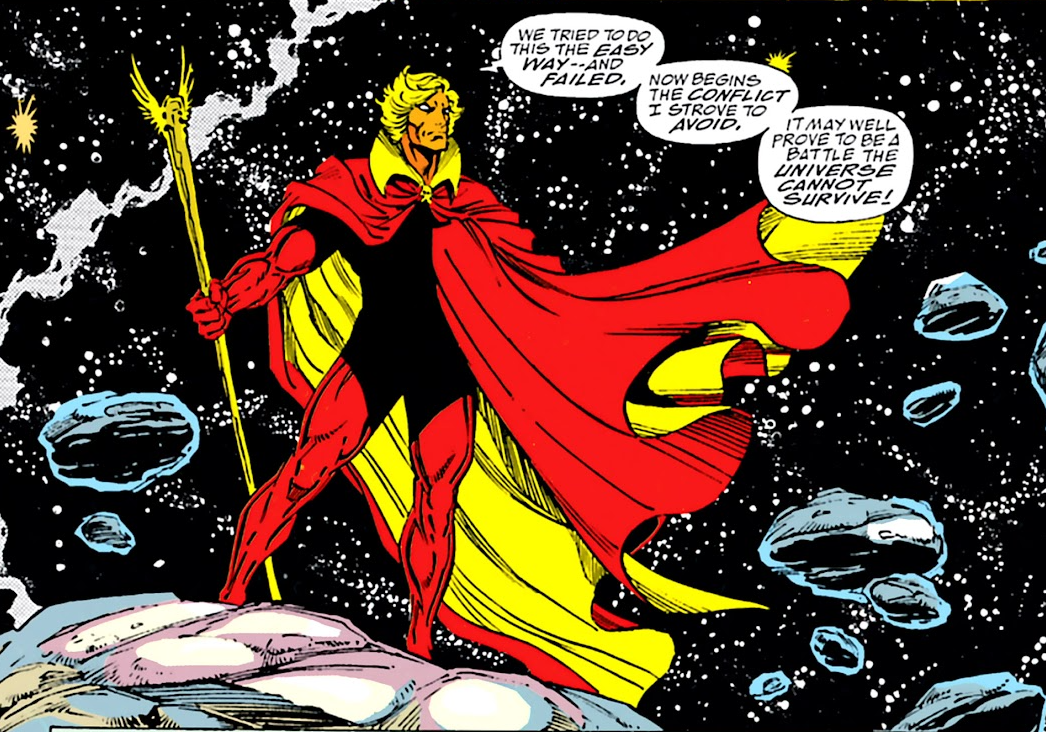 While his initial plan would be foiled, his long-term plan came to fruition and he would claim the Infinity Gauntlet as his own defeating both an arrogant Nebula and prideful Thanos.

After obtaining the gauntlet, Warlock would fashion himself a god that would use the power of the Infinity Gauntlet wisely. 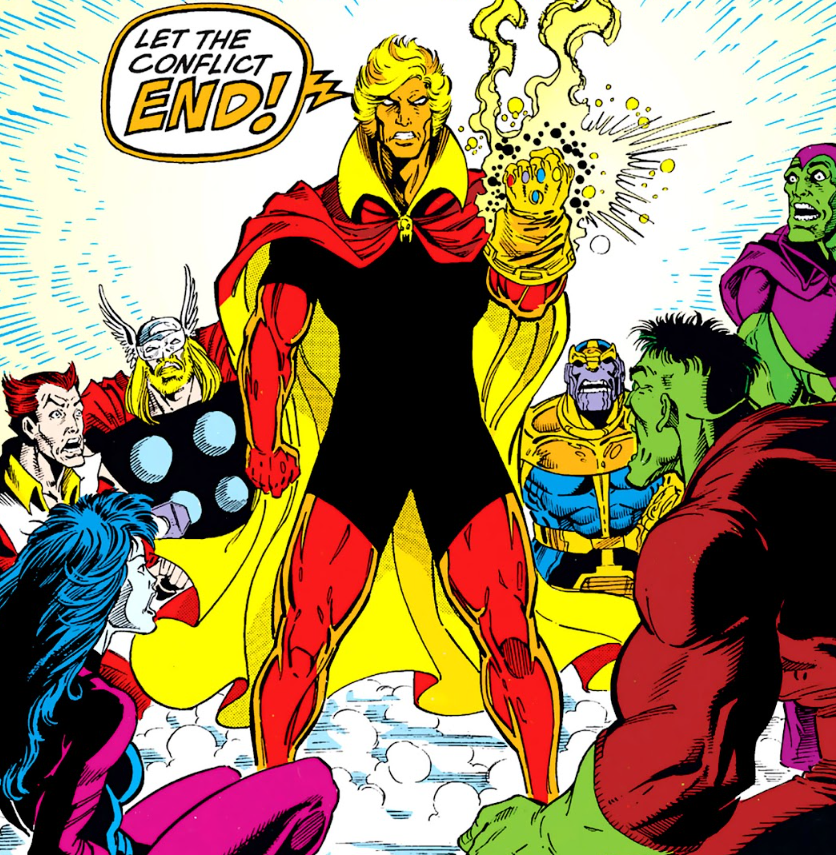 Referencing this comic book story, July later states in his video, “There was so much opportunity and you just neglected it for what? And now you introduce Thanos’ brother, you introduce Adam Warlock after Thanos is all gone. It’s pointless. Now, you’re just, ‘Hey, it’s an IP farm, we have this character let’s use them.'”

“And I think that’s the frustration. If you are not knowledgeable on the books it’s more of these are easy things,” he asserted. “Look man, these fans are not asking you to just bend over backwards for the material. No, it’s like, ‘Dude, show some love!'” 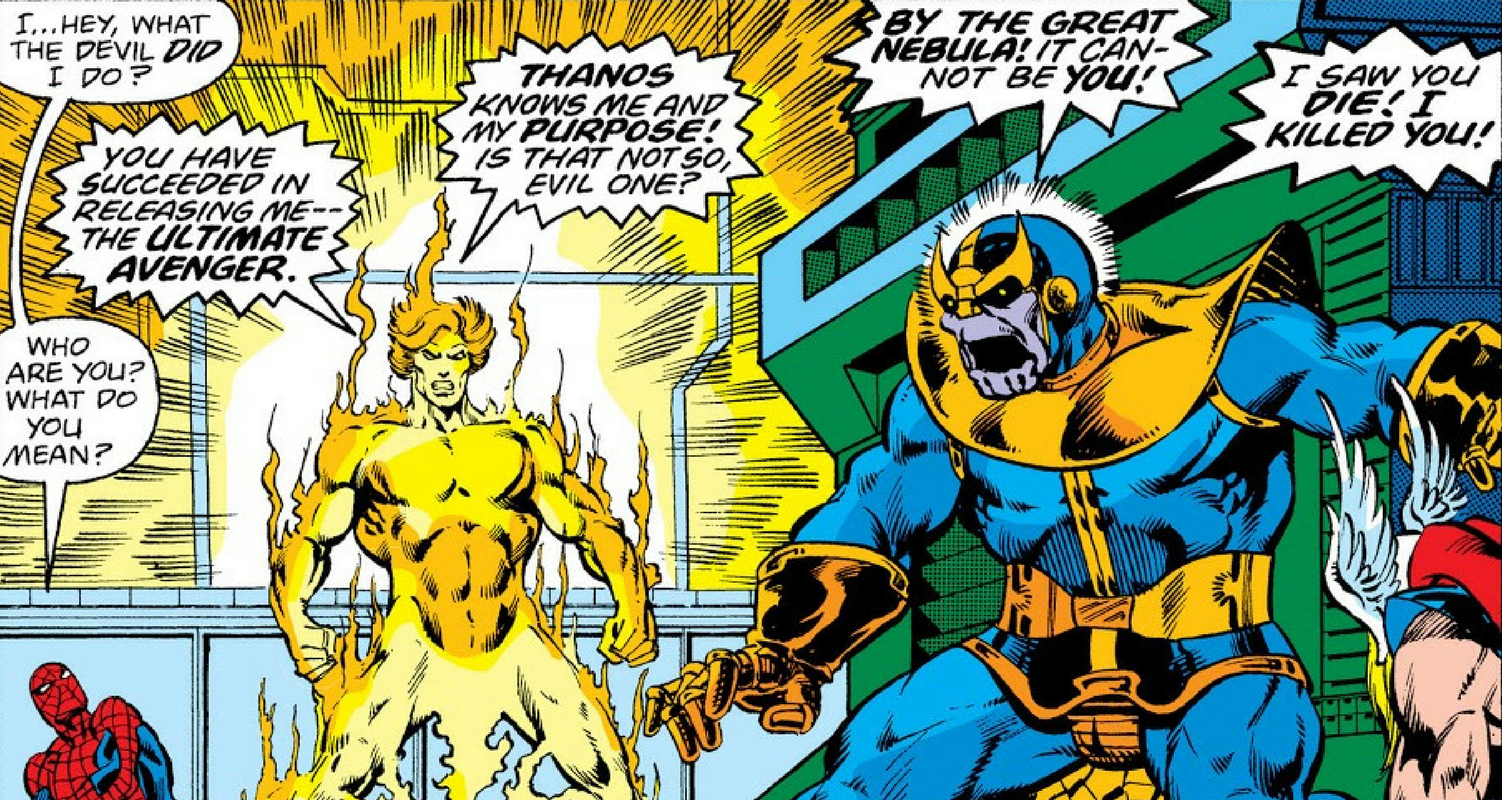 July’s comments echo former TV executive Paul Chato’s recent comments. During an apperance on Midnight’s Edge in The Morning #326, Chato stated, “I think in many ways the MCU kind of ruined things in that comic books have traditionally had their own arc often based on a writer. So you would get the Dan Slott She-Hulk, which is kind of what they screwed up.”

“But then you’ve got the John Byrne She-Hulk. There’s nothing stopping any of these companies to just go, ‘Okay, we’re just going to do the Dan Slott thing, the John Byrne thing, the Galacticus Fantastic Four, and has a beginning, middle, and an end.’ It has its own cast and then you get a new cast for the next set just exactly like they do in comics where they find a new artist, new writer, and you get a new experience,” he said.

“The MCU kind of blew that up because they took segments of contiguous comic series and pulled stuff from them all and ruined those series,” he asserted. “So you can’t even go back to the series that they pulled ideas from to make a contiguous arc from that edition. The MCU poisoned the well in many ways,” he concluded.

Chukwudi Iwuji as The High Evolutionary in Marvel Studios’ Guardians of the Galaxy Vol. 3. Photo courtesy of Marvel Studios. © 2022 MARVEL.

What do you make of July’s explanation? Is there a reason to introduce Adam Warlock now with his main foe Thanos already being vanquished multiple times in the Marvel Cinematic Universe by the Avengers?

NEXT: Eric July: People Who Eat Up Hollywood’s Nostalgia Bait Are “Part Of The Problem”