In the latest instance of one of the most tired branches of outrage regularly propagated across social media, Netflix’s new Wednesday series director Tim Burton has been accused of racism for the sole ‘crime’ of depicting black characters as less-than-perfectly virtuous. 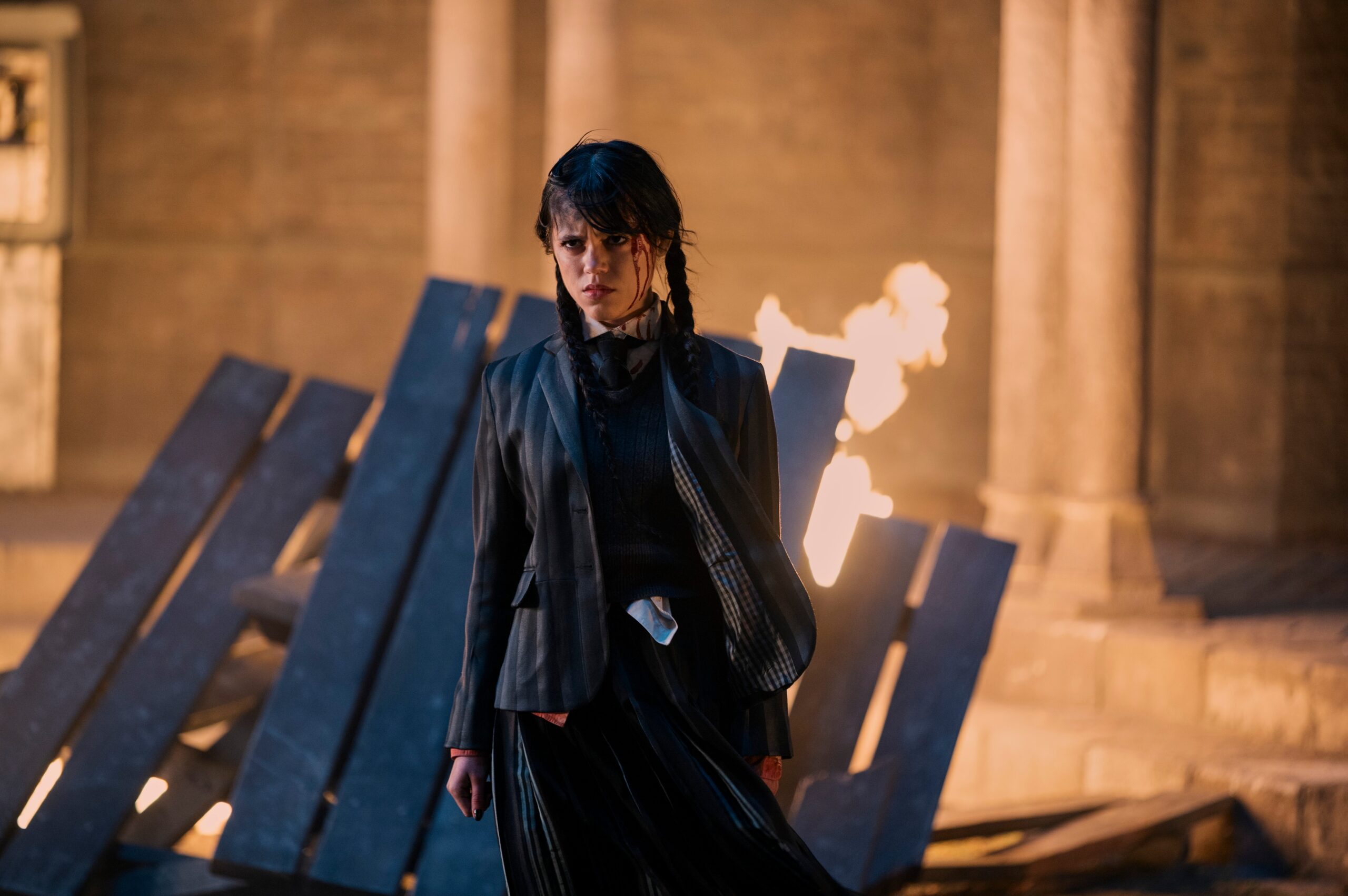 Hitting the streaming service on November 23rd, Wednesday follows the everyday exploits of the title The Addams Family character who, after being kicked out of her high school for violently retaliating against her brother’s bullies, finds herself enrolled in her parents’ ‘spooky’ alma matter, the Nevermore Academy. 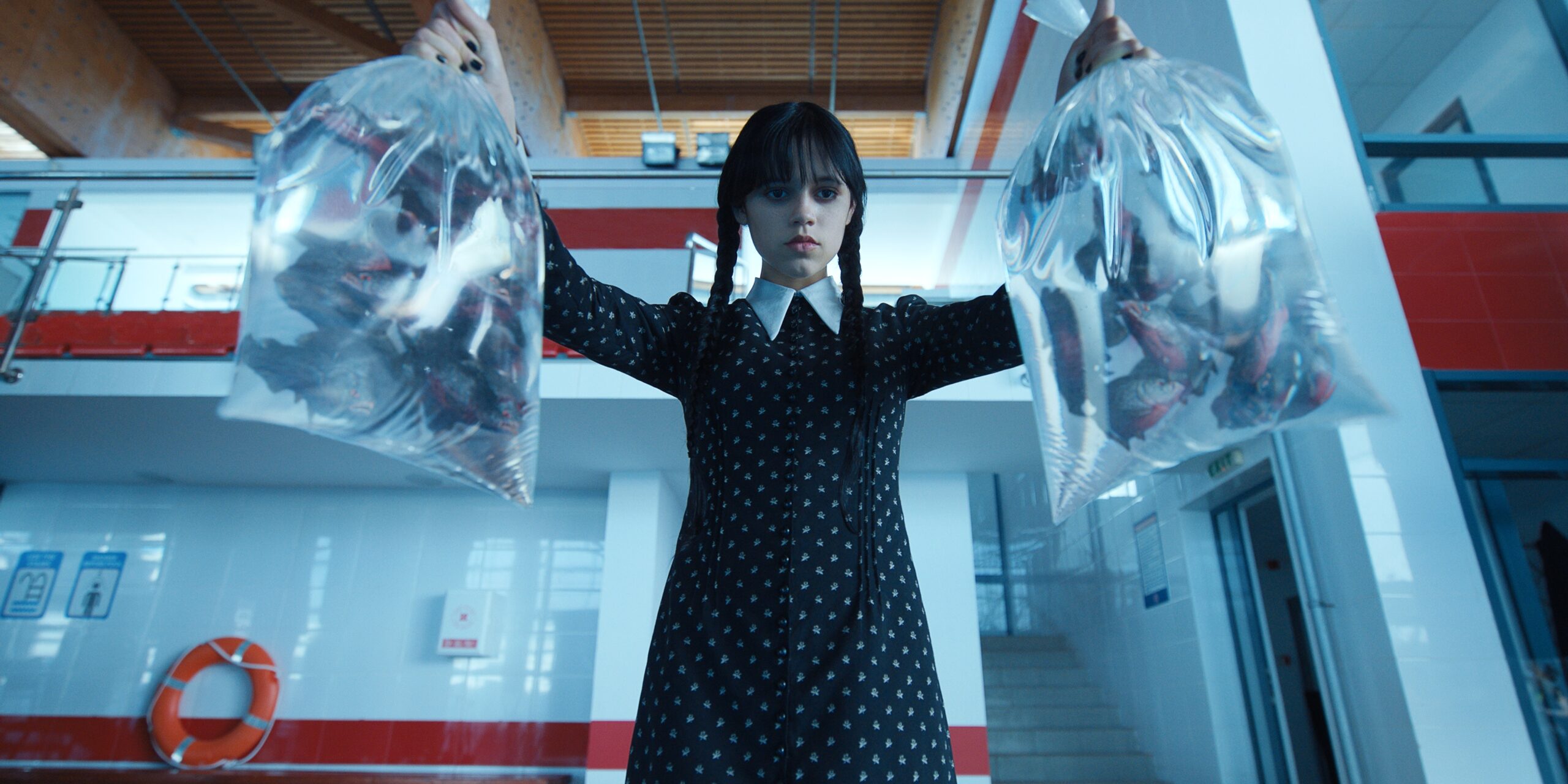 Though her signature stoicism and penchant for the macabre initially drives a rift between her and her new peers, Wednesday soon (Jenna Ortega) proves herself more amicable than initially assumed when she throws herself headfirst into solving a string of murders which have paralyzed the school.

Among those who are put off by Wednesday’s spooky demeanor are the school’s ‘queen bee’ Bianca Barclay (Joy Sunday) and the local mayor’s son Lucas Walker (Iman Marson), both of whom start the series out by using their status to bully the new transfer before eventually coming to appreciate her. 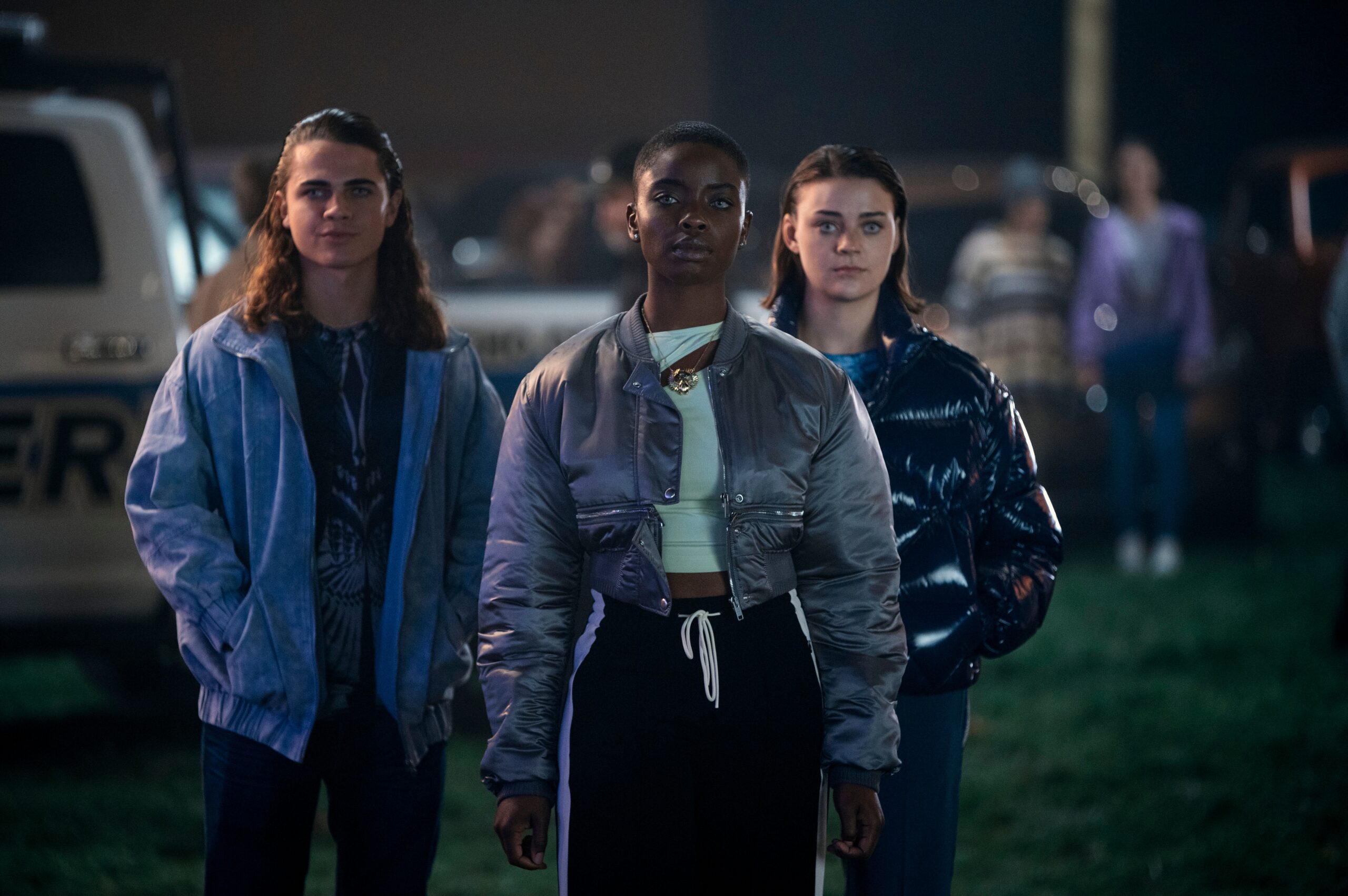 Yet, despite these character archetypes being rather standard for such coming of age tales, the fact that these two characters were portrayed by black actors Sunday and Marson was enough to draw tired accusations of racism against both the streaming platform and – ostensibly because his was the only name the outraged could easily recognize – the aforementioned Burton, who helmed the series’ first four episodes. 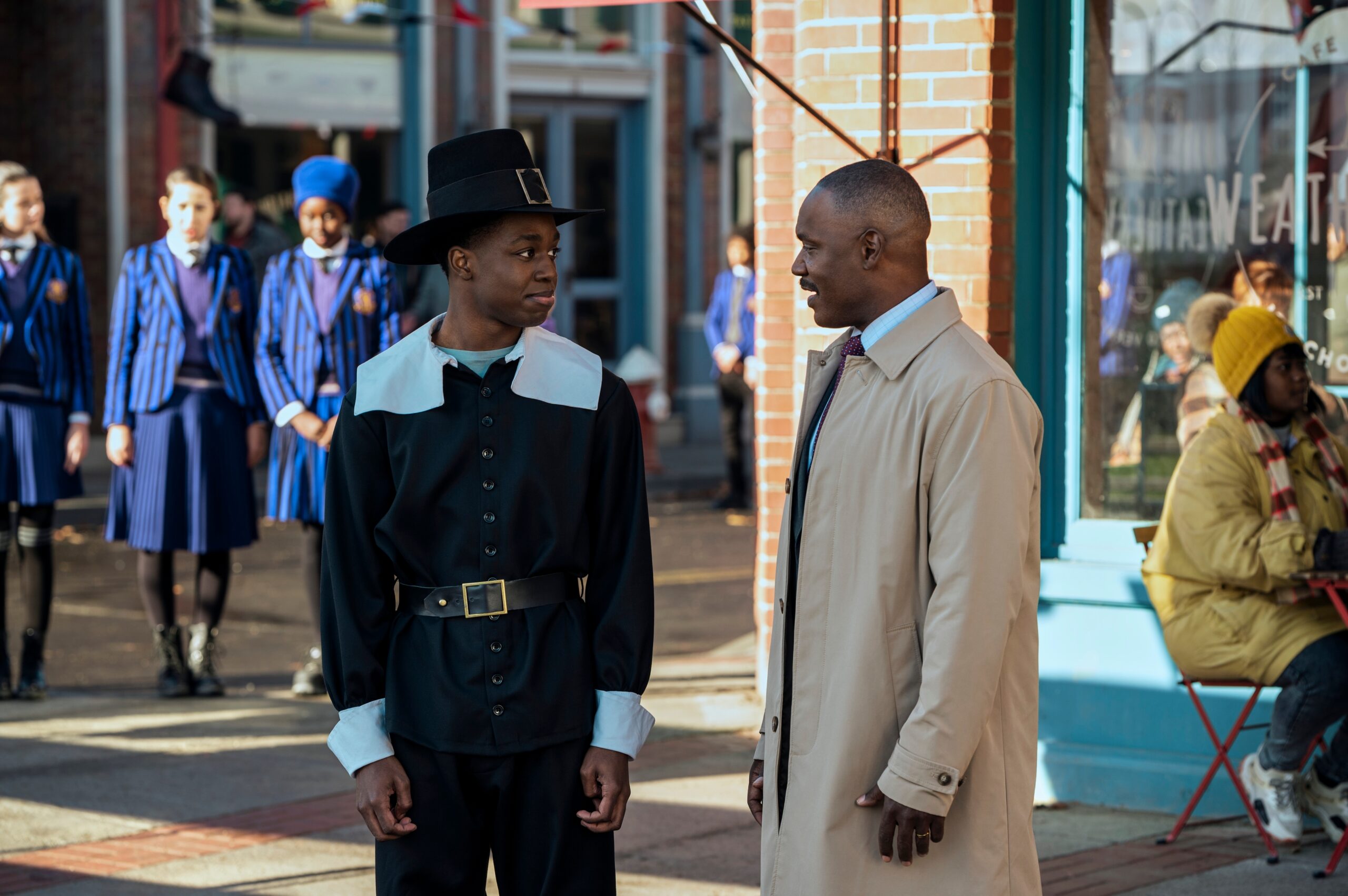 “Why is the the Black girl in Wednesday’s school an aggressive bully tho?” questioned @ShinyFluffdnd. “hmmm tim burton is a known racist….. no surprises there…..”

Likewise, @battysoda cried, “moms making me watch Wednesday and so far all the black characters have been villians. Awesome Job tim you really showed how not racist you are /sar”.

Going for a reach of Monkey D. Luffy-proportions, @TheHoneyMa asserted, “Tim Burton not racist, huh? In Wednesday, the boats in the Poe Cup are named after Edgar Allen Poe stories. The black character Bianca is on the Gold Bug team. The Gold Bug is the only Poe story that features a black character—a particularly dumb slave named Juniper.”

“Love Wednesday, but really caught me off guard that they made a black family the owner of a Pilgrim themed amusement park??” replied @blxckchaosmagic. “and the only two black characters we see with any lines in ep 1 are both hostile/aggressive bullies for no reason (Bianca still a baddie tho idc I love her)” 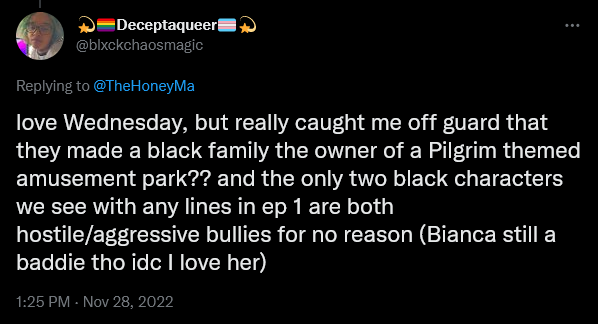 Further affirming @TheHoneyMa’s perspective, @heyitsdime balked, “But see when i said this, everyone said i was trying to villainize Bianca because she’s darkskin like Tim didn’t set her up as the mean girl so people could dislike her.”

“It’s intentional with him,” she accused.

Some critics were so eager to be angry that they bafflingly (though unsurprisingly) took a reference by Wednesday to the literary concept of the ‘Monkey’s Paw’ – essentially when a wish is fulfilled, but at an ironic or disheartening cost – to be some sort of racist commentary.

As put by one such critic, @gangstag1rl, “When wednesday had a line after enid referred to bianca bringing her scarf back and wednesday say ‘like a monkey’s paw’ or something i paused the damn show and just sat there like ??????????????”

Notably, many of Burton’s detractors were quick to point to his 2016 push back against the concept of superficial, forced diversity in media.

“Nowadays, people are talking about it more,” the Batman (1989) director explained to Bustle’s Rachel Simon while on the press circuit for his cinematic adaptation of Miss Peregrine’s Home for Peculiar Children, which was then facing outrage for its lack of non-white cast members. 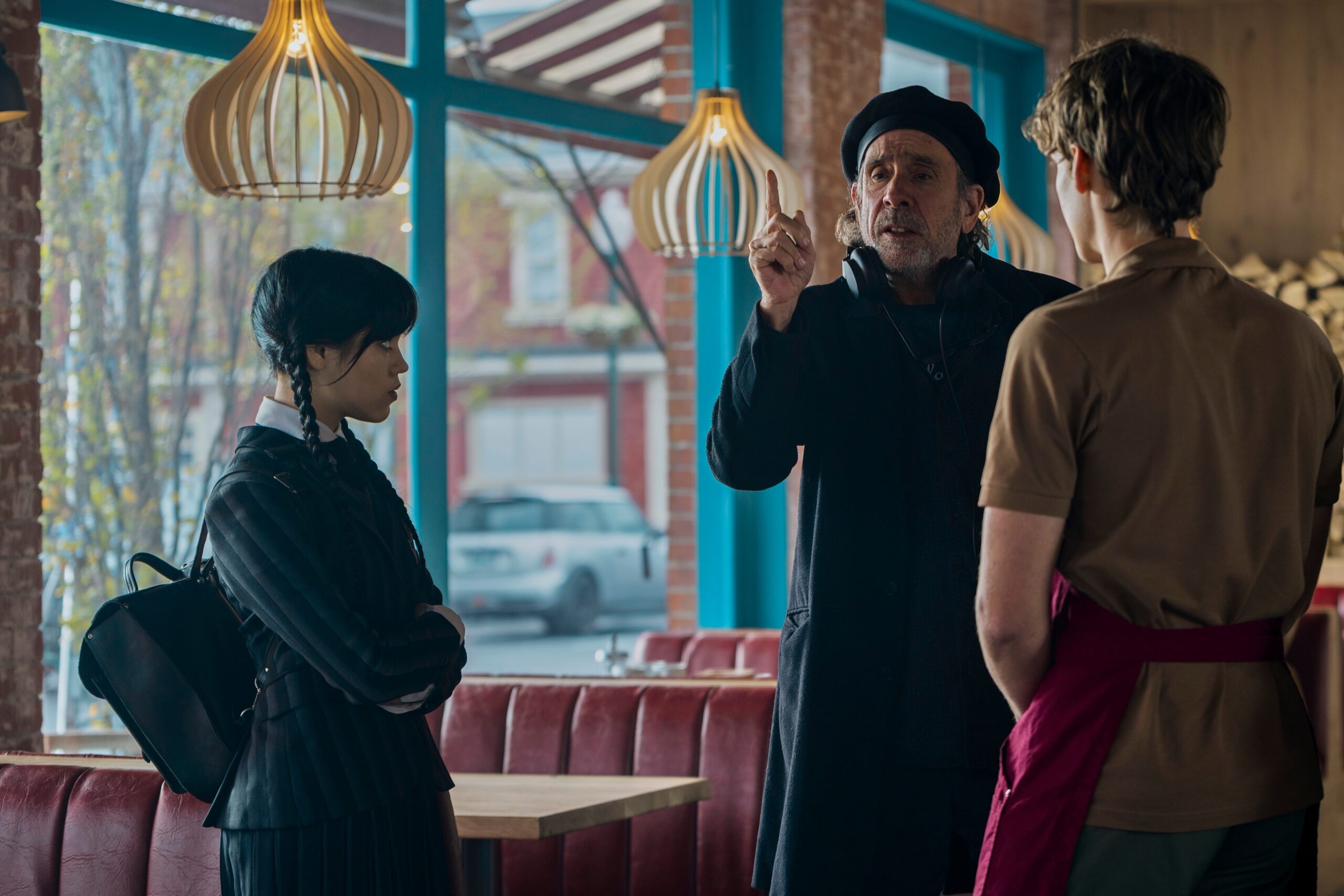 “Things either call for things, or they don’t,” he continued.

“I remember back when I was a child watching The Brady Bunch and they started to get all politically correct,” recalled Burton. “Like, OK, let’s have an Asian child and a black. I used to get more offended by that than just… I grew up watching blaxploitation movies, right? And I said, that’s great. I didn’t go like, OK, there should be more white people in these movies.” 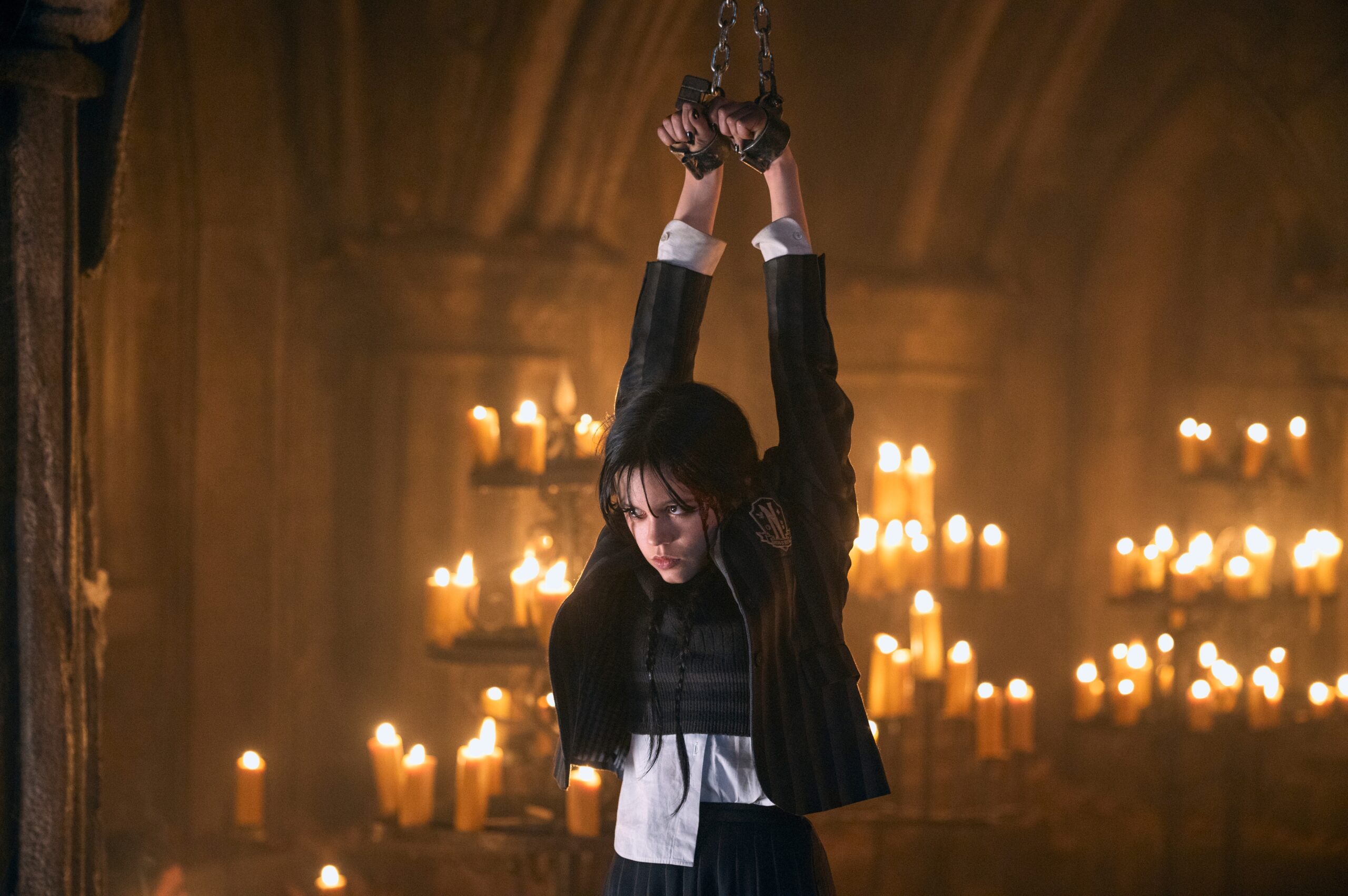 All six episodes of Wednesday are now streaming on Netflix. 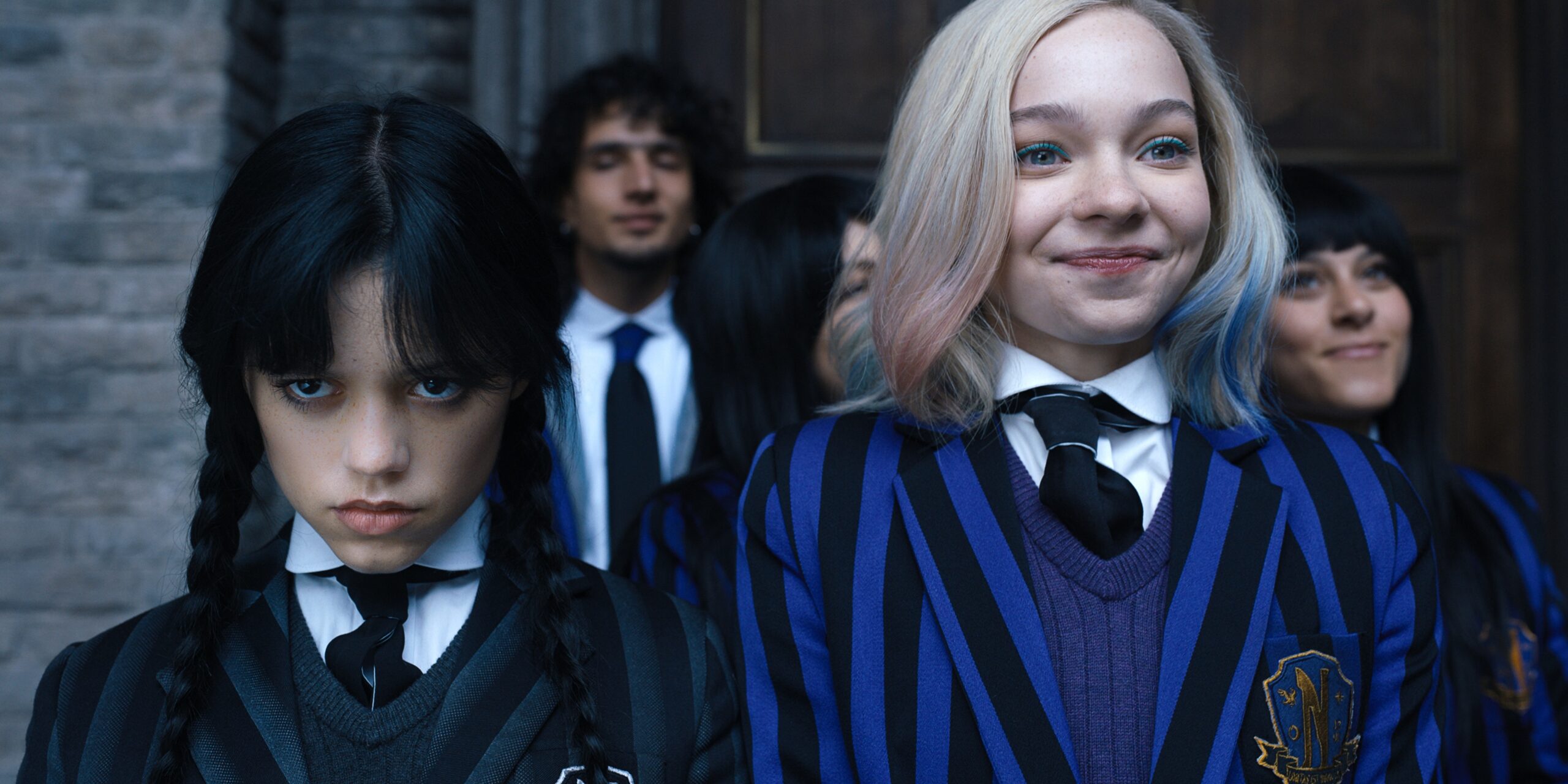 NEXT: ‘Stranger Things’ Star Caleb McLaughlin Claims He Faces Constant Racism From Fans: “Because I Was Born With This Beautiful Chocolate Skin, I’m Not Loved”