Actor Carl Weathers, who plays Greef Karga in The Mandalorian, recently promoted the upcoming third season on Disney+ by claiming it is “part of the Star Wars Multiverse.”

Carl Weathers is Greef Carga in the Disney+ series THE MANDALORIAN.

Weathers shared the official poster for the upcoming third season of The Mandalorian writing on Twitter, “Come on, ya’ll!!! This Mandalorian poster is too cool!”

He then added, “Love being part of the Star Wars Multiverse. March 1, 2023, baby. #GreefKarga #BePeace.” 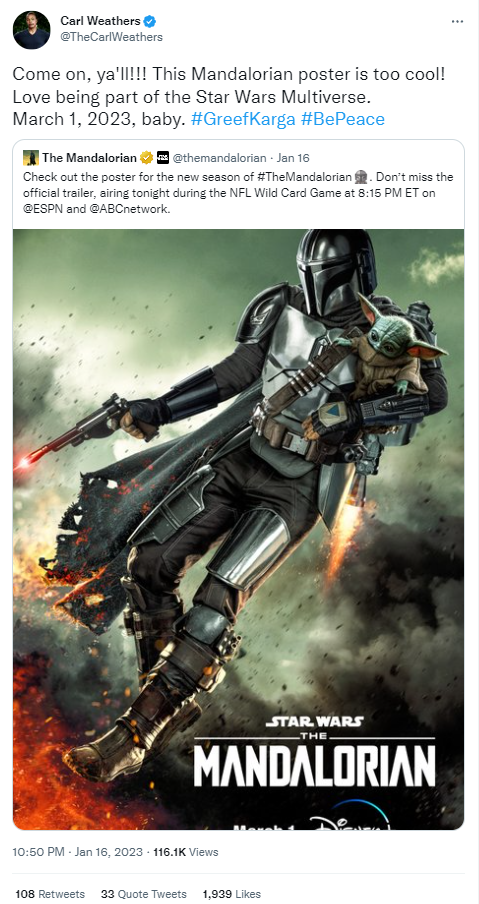 It’s unclear what Weathers meant by Star Wars multiverse as there hasn’t been such a dynamic created in Star Wars.

Star Wars traditionally had an Expanded Universe, which included numerous comics, novels, video games, and more that George Lucas let other creators play in after the wild success of the original trilogy. 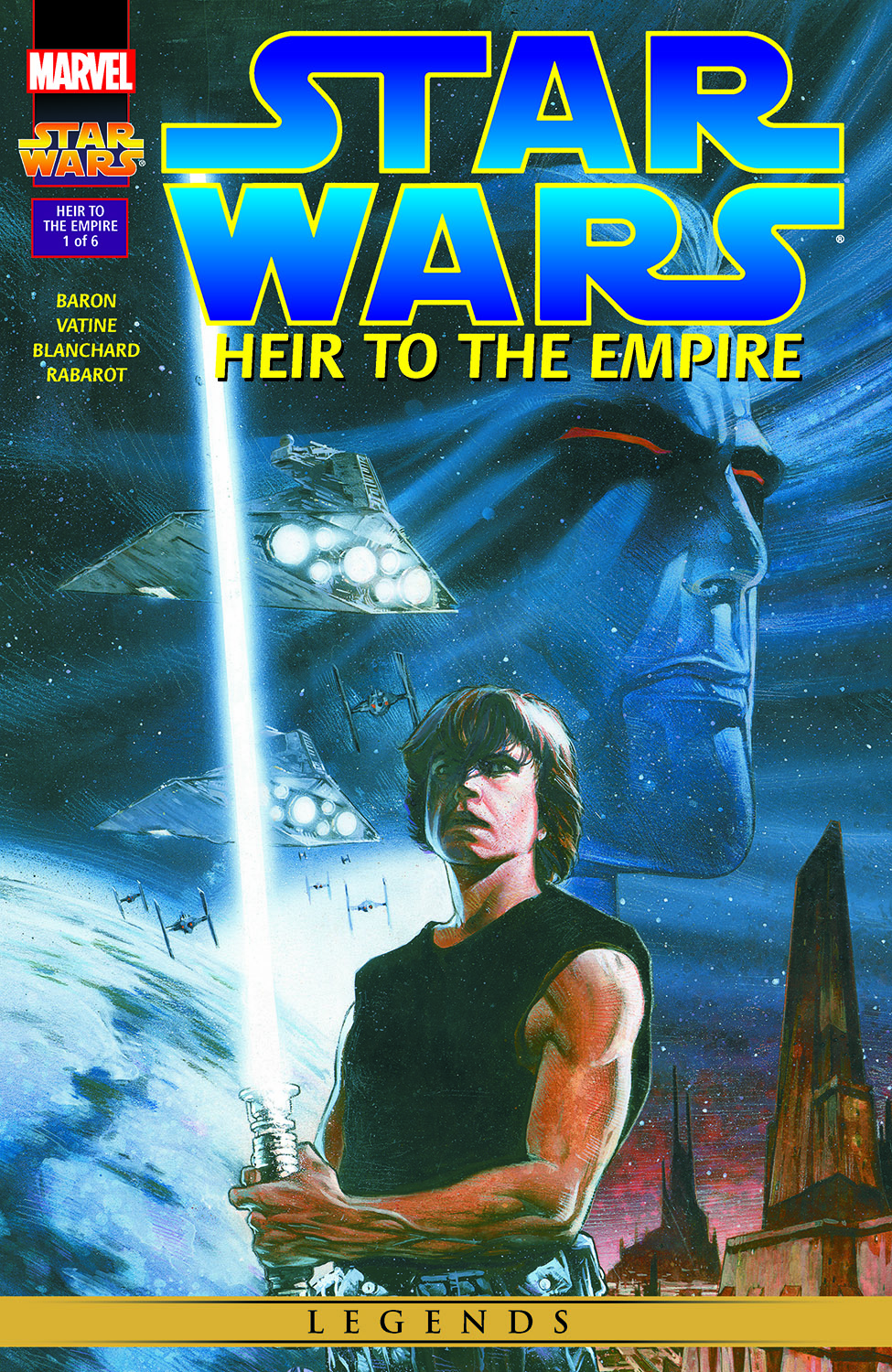 However, the Expanded Universe was officially turned into Legends after Disney purchased Lucasfilm and took over Star Wars. On their website back in 2014, Lucasfilm announced, “In order to give maximum creative freedom to the filmmakers and also preserve an element of surprise and discovery for the audience, Star Wars Episodes VII-IX will not tell the same story told in the post-Return of the Jedi Expanded Universe.”

They added, “While the universe that readers knew is changing, it is not being discarded. Creators of new Star Wars entertainment have full access to the rich content of the Expanded Universe. For example, elements of the EU are included in Star Wars Rebels. The Inquisitor, the Imperial Security Bureau, and Sienar Fleet Systems are story elements in the new animated series, and all these ideas find their origins in roleplaying game material published in the 1980s.” 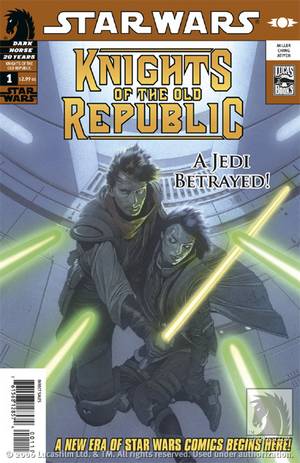 There have also been rumors going back years that Jon Favreau and Dave Filoni would be expanding on Filoni’s World Between Worlds concept that he introduced in Star Wars Rebels.

The World Between Worlds was accessed by Jedi Padawan Ezra Bridger through a painting of the Mortis gods on the exterior of a Jedi temple located on the planet Lothal. In the Star Wars Rebels Season 4 episode “A World Between Worlds,” Bridger hears numerous voices of Star Wars characters including Yoda, Obi-Wan Kenobi, Jyn Erso, Leia Organa, and others.

Not only does he hear voices, but he discovers multiple portals that are connected by numerous pathways highlighted by white lines.

At one portal, Bridger sees the duel between Ahsoka Tano and Darth Vader on Malachor that took place during the season 2 finale “Twilight of the Apprentice.”

After Vader is about to strike a killing blow on Ahsoka, Bridger reaches into the portal and drags her into the World Between Worlds. Bridger eventually deduces that he believes he can change Kanan’s fate as he changed Ahsoka’s fate.

However, Ahsoka advises, “Ezra, Kanan gave his life so that you could live. If he is taken out of this moment, you all die.”

The two would eventually be attacked by Darth Sidious, as he attempted to gain control of the realm. Ahsoka would flee Sidious’ attack and return to Malachor. Meanwhile Bridger was able to escape back through the painting at the Jedi temple. When deactivating the portal, Ezra hears the Son tell him, “The future, by it’s nature, can be changed.”

YouTuber Overlord DVD detailed back in June 2020 that Lucasfilm would use The Veil of the Force or the World Between Worlds to undo Disney’s disastrous sequel trilogy.

He stated, “One of the new insiders commented that Lucasfilm can hit the reset button and fix everything. At this point my source asked, ‘What reset button?’ And the insider responded again, ‘The Veil.’ Which finally led my source to ask, ‘What is The Veil?’ The insider replied, ‘The Veil of The Force? Haven’t you guys seen Star Wars Rebels?”

He went on to detail, “Inside The Veil, you see flashbacks of past events and events that have yet to occur. This Veil could apparently be used to fix Star Wars. Although this particular insider declined to go into details regarding how exactly this could be used to save Star Wars.”

Following the announcement of the Ahsoka series, Overlord DVD claimed the show would feature the World Between Worlds and be instrumental in undoing the sequel trilogy.

He stated, “My agents were reporting that Ahsoka and the Veil of the Force would be instrumental in erasing the damage that Kennedy wrought. And now it appears that rumor was well founded.”

He would later state, “Yes, it appears that the pieces are being put in place to erase the Disney sequel trilogy and restore order to Lucas’ galaxy.”

A more recent rumor from Making Star Wars seemingly indicates that the World Between Worlds will be used in the Ahsoka series, but it will teach a lesson that destiny cannot be changed no matter the choices one makes. Making Star Wars asserts, “The lesson for Tano appears to be that she cannot change her destiny and instead she must embrace it.”

Making Star Wars details that Ahsoka will be played by multiple actors aside from Rosario Dawson, who played the live-action version of the character in The Mandalorian Season 2 and The Book of Boba Fett.

Not only will there be multiple actors, but these multiple actors will depict Ahsoka at different points in her life. Making Star Wars explains “these are glimpses or small sequences and Dawson will play Ahsoka during the majority of the story.” 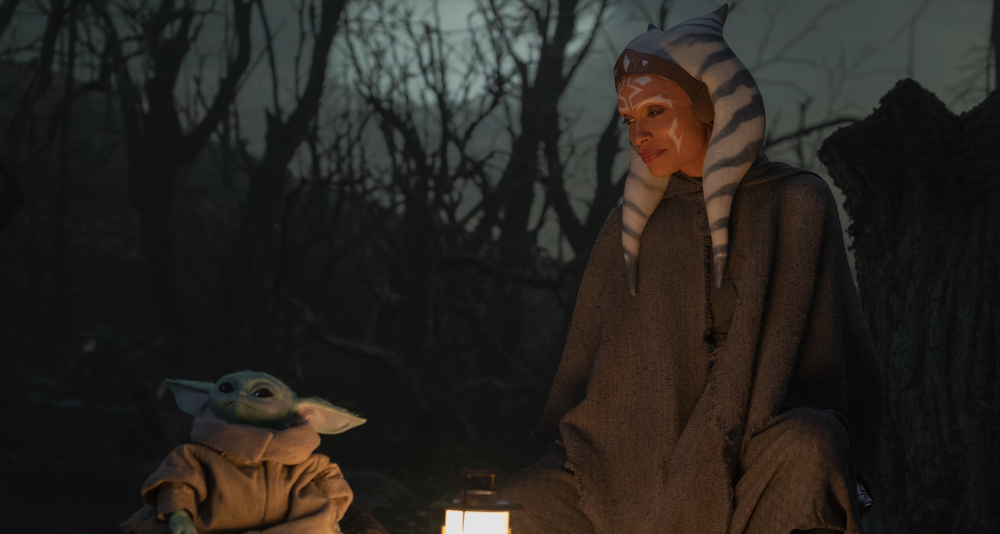 Furthermore, this rumor claims that these glimpses are seen through the World Between Worlds and will reveal possible outcomes depending on significant choices she makes throughout her life.

Making Star Wars specifically notes that “if Ahsoka had returned to the Jedi Order, she would be the one fighting Darth Vader on Mustafar having the high ground, not Obi-Wan Kenobi.”

To this point, Making Star Wars also notes that an actor portraying Ahsoka filmed “fight scenes with Clone Wars Ahsoka” and that Hayden Christensen also did fight training “wearing the same costume he wore on Mustafar in Revenge of the Sith.”

On top of this rumor, Making Star Wars also claims that Ahsoka will ride on a Loth-wolf in the upcoming live-action series. This is important because the Loth-wolves have the ability to cross into the World Between Worlds.

Making Star Wars details, “I am under the impression it is specifically a Loth-wolf Ahsoka uses as a mount in some sequences of the series as they say it is a giant wolf and that is the best connection we can make to established creatures and Ahsoka. I know some of the moments with Ahsoka and her mount are action based and some are just expositional in nature.”

The Loth-wolves were also highlighted in a live-action shot released at Star Wars Celebration showing Sabine Wren viewing a painting that shows two Loth-wolves encircling the crew of the Ghost from Star Wars Rebels. 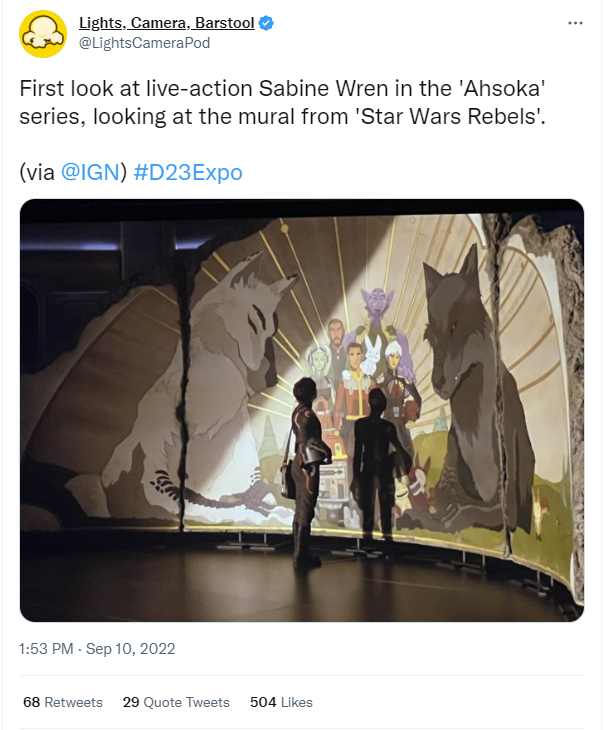 It’s possible we are also just reading way too much into Weathers’ use of multiverse and he really just meant universe and there is nothing more to it than that.

What do you make of Weathers claiming The Mandalorian Season 3 is part of the Star Wars multiverse?