Many YouTubers take on Hollywood’s woke content, with The Critical Drinker being one of the standouts among them. One of the reasons for that is because, as Will Jordan, he also creates stories. And he spoke about the novels he writes, the movie he is crowdfunding, and more in an exclusive interview with Bounding into Comics. 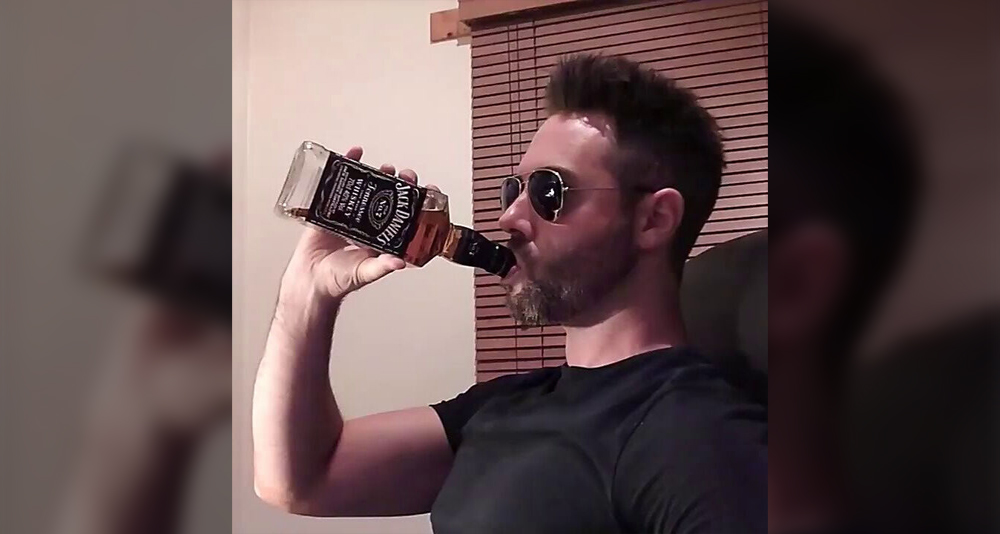 RELATED: Based Black Friday: Here’s One Place You Can Go To Find Great Sci-Fi & Fantasy

Bounding into Comics: The earliest video on The Critical Drinker YouTube channel is from 2012, and the American version of your Amazon author page lists your first Ryan Drake novel as having been published in 2012. Which came first: The Critical Drinker reviewing entertainment, or Will Jordan authoring tales?

Will Jordan: Well, there were actually other, older, video reviews which I’d done before then, although I ended up removing them because the editing was so shockingly amateurish that I just couldn’t bring myself to keep them visible. One day, who knows? Maybe I’ll re-edit them and post them back up again.

But the two things were very much happening in tandem back in 2011 when I first started making YouTube videos, while also working towards becoming a published author. It was a tiny channel at the time, just a few hundred subscribers, although I really enjoyed the process of making videos. 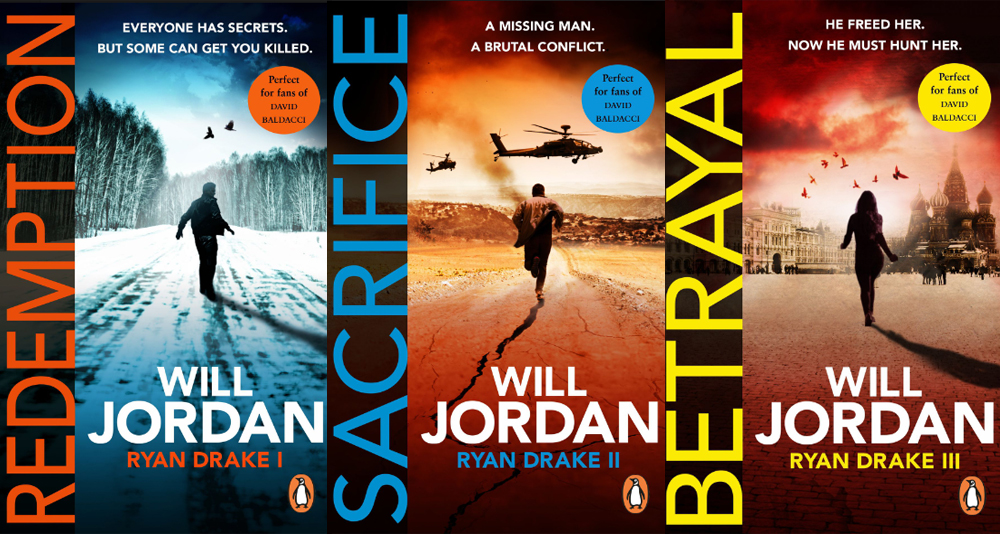 Novels 1-3 of the Ryan Drake series.

But when I got a call from my agent telling me my first publishing deal had been signed, I felt like I really had to choose between the two things—either give 100% to my writing or 100% to YouTube. And, well, writing seemed like the more worthy cause at the time.

It’s a shame in a way, because the YouTube channel was just starting to gain some traction when I stopped posting. Lucky for me, I never deleted it altogether and so there it sat for the better part of a decade before I started posting again. 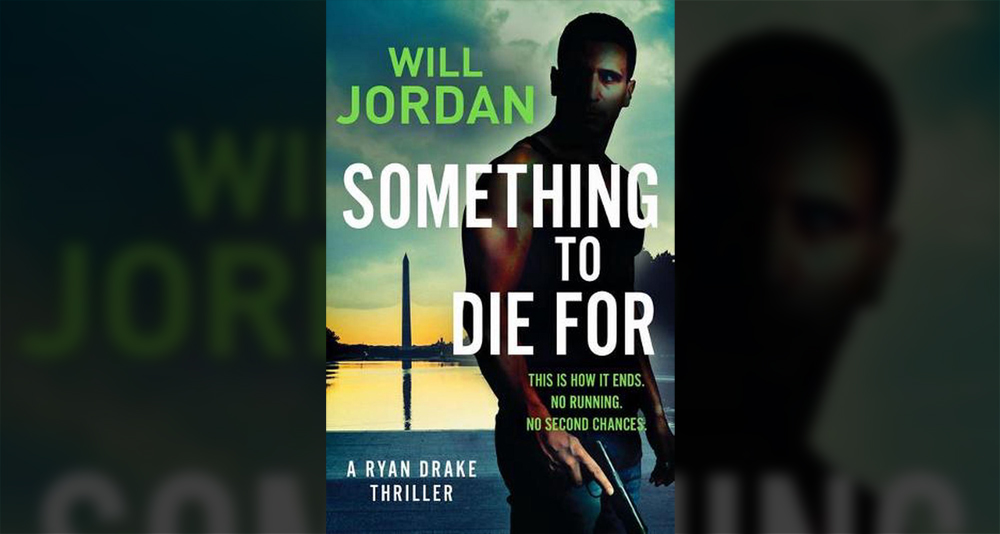 BiC: How much did your writing change between Redemption in 2012 and Something to Die For in 2020, and are you ultimately satisfied with the Ryan Drake series or are there things you would do differently today?

WJ: Looking back on Redemption, I can definitely see how my writing was still rough around the edges and maybe a bit over the top at times, but I guess it was my first novel and I was only in my 20s so I can live with it. But each new novel is a learning experience, and I’d like to think my writing has matured and improved with each subsequent book.

Overall, I’m very happy with how the Ryan Drake series concluded. Writing that final novel was a real challenge, both intellectually and emotionally, because on the one hand I had a tonne of plot threads and character arcs to bring together and close off in a satisfying way, and on the other, I was very much aware that this might be the last time I was allowed to write about these characters I’d spent the past decade with. You almost feel like you’re saying goodbye to old friends.

That being said, I know so many authors who started a series with grand plans to write a dozen books, only to have the publisher pull the plug after just two or three entries because they didn’t meet sales targets, so I’ll always be grateful that I got to say goodbye to Ryan Drake on my own terms. 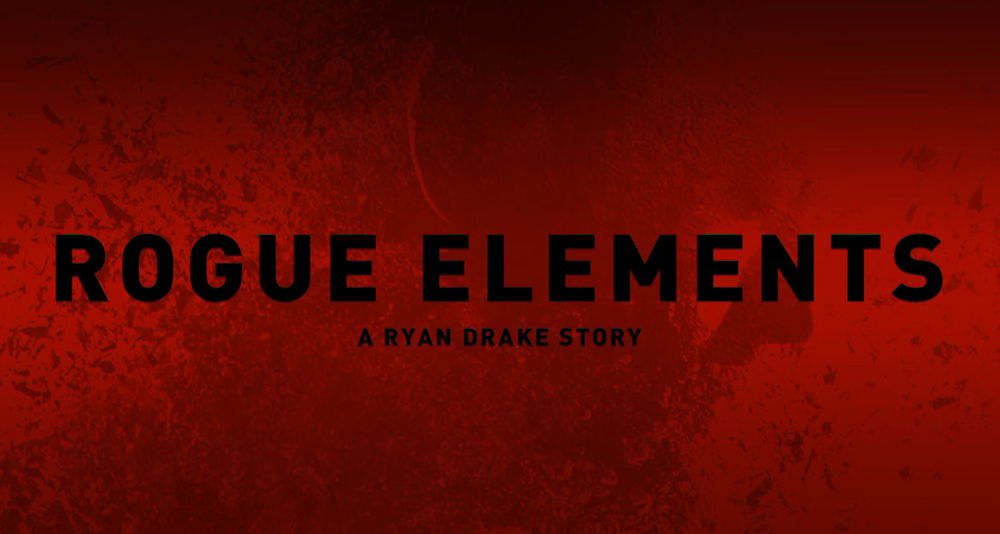 BiC: You go into detail on your Kickstarter page with explaining how you teamed up with your film crew to produce Rogue Elements. But apart from that, what inspired you to crowdfund the movie and take such a hands-on approach with it instead of going the more traditional route where you would option the rights to producers and a movie studio, and let them do the work?

WJ: Well, I’d had experience of that kind of thing before, and come away from it feeling pretty unimpressed. Hollywood and bull**** go hand in hand, and people sign you up with big promises of ambitious productions, industry connections and investors with deep pockets, only to sit on the rights for years and do basically nothing.

This time around, I wanted things to actually happen with a sense of urgency, and I wanted to be involved with the production as much as possible, and I was lucky enough to meet some people who were able to do that. And as for the crowdfunding, it was a handy way of gauging audience interest in the project, which turned out to be far bigger than any of us could have expected! 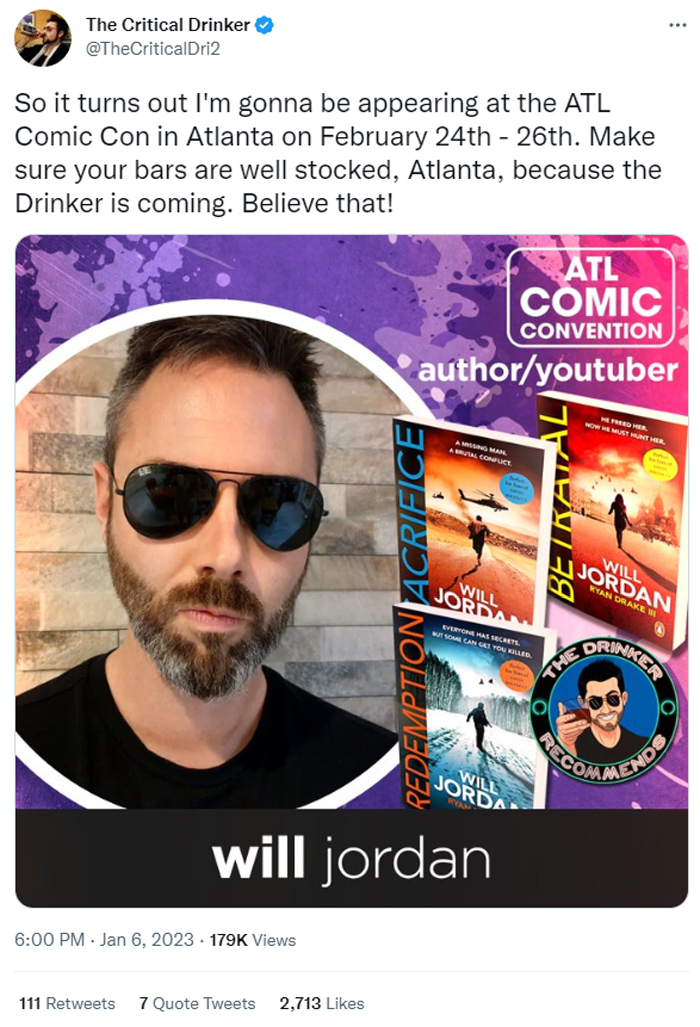 BiC: Your Amazon author page mentions that the movie rights to your first Ryan Drake story, Redemption, were optioned and a feature film is in production. Is an adaptation of Redemption still happening?

WJ: Well, they currently have the option rights for the time being, so they’re free to do what they wish with Redemption. After that, we’ll see what happens.

BiC: Your Kickstarter campaign for Rogue Elements smashed through its initial goal and has over 5,000 backers. What’s your takeaway from this so far? Is that a much larger number than you envisioned? Does it increase the pressure on you? Do you see it as another sign that people are becoming increasingly open to the idea of supporting creators outside of the major entertainment systems and industries?

WJ: I see it as a sign of the hunger there is for proper movies whose only goal is to entertain the audience. I mean, having a certain profile online obviously helped raise awareness of it, but I was genuinely blown away by how it took off. Almost overnight it went from a little fan project on a shoestring budget to a proper production with actual resources and people behind it.

Obviously that brings with it higher expectations, which is why we’ve expanded the script from a little 15 minute short up to a 45 minute mini-movie. The pressure is definitely on us to deliver something good, and I love it. I’d rather be under pressure than have nobody care about it. 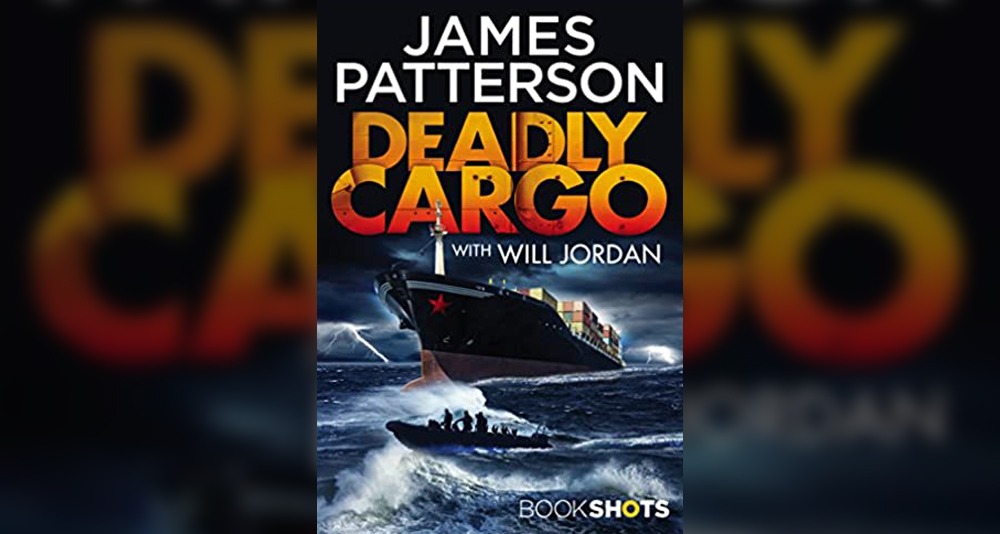 BiC: What was it like working with James Patterson on Deadly Cargo and how did that affect your writing career?

WJ: I wish I could tell you! Guys at Patterson’s level don’t really “work” with little guys like me—they have assistants and editors who act as go-betweens. So my interactions with him basically amounted to some editor saying, “James likes what you’ve done,” and that was it. But hey, it was a fun book to write at least! 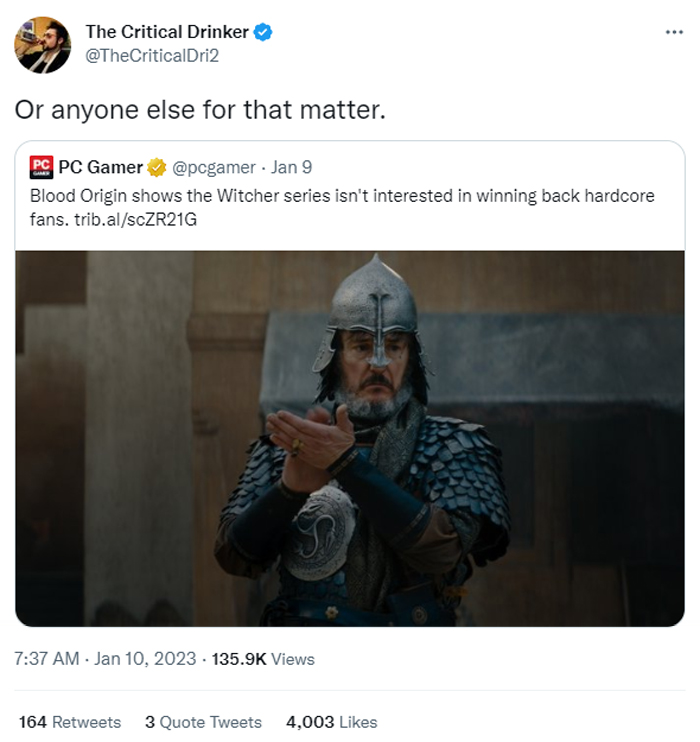 BiC: One of the big ways the legacy entertainment world has driven away its fans is through its open contempt and downright hatred of said fans, particularly when fans criticize the Latest Product. Is this something that you keep in mind when fans and readers critique or criticize your work, and what do you think the proper response should be from a creator to criticism he receives?

WJ: Obviously few people relish the idea of criticism, and occasionally you’ll see some review on Amazon or YouTube where you think, “What is this guy even talking about?” but ultimately you just have to remember that people have a right to say what they want.

I never get into beef with critics and detractors because really, what’s the point? If they’ve already decided they hate you, then you’re not going to change their minds. And all it does is drain time out of your life, and make you look petty and insecure. So my advice to anyone in that position is to simply take it on the chin, keep your mouth shut and move on with your life. 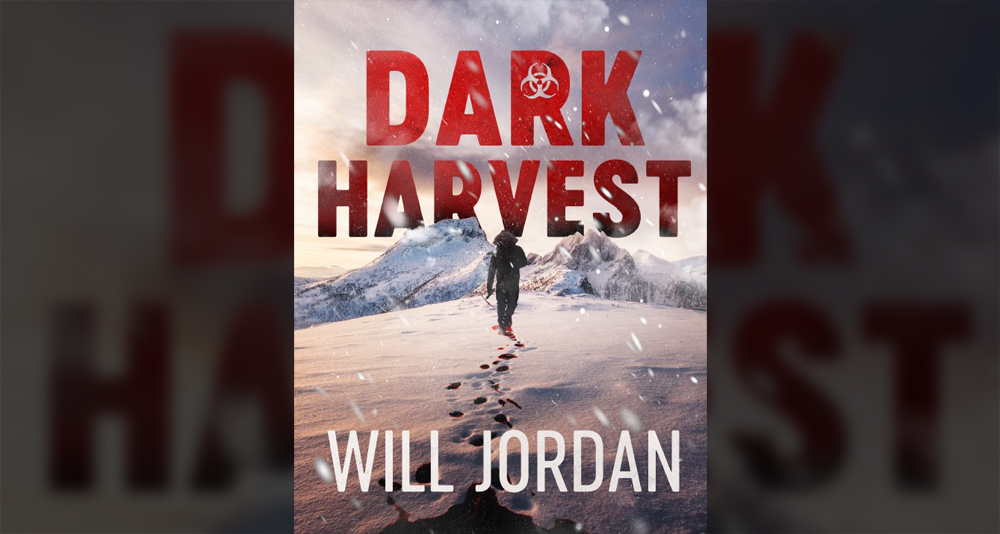 RELATED: Interview: Lauren Chen Reveals Who Influenced Her to Become a ‘Mediaholic’

BiC: Dark Harvest is your latest novel. Are you satisfied with readers’ reception of it and do you envision any sequels to it?

WJ: I’m very satisfied! It’s been getting excellent reviews, and I’m pleased with how its done. As for sequels, well, watch this space. I certainly left the door open for more books, but for the time being, my creative focus is on Rogue Elements.

BiC: The United States Army, through its Mad Scientist Laboratory, seeks out speculative fiction to help it think about future threats, technology, and so forth. Did you write Dark Harvest with the idea that what appears in the novel could be similar to a potential future threat?

WJ: Haha! I never could have imagined we’d face a real global pandemic when I started writing it, but life has a funny way of emulating art sometimes. 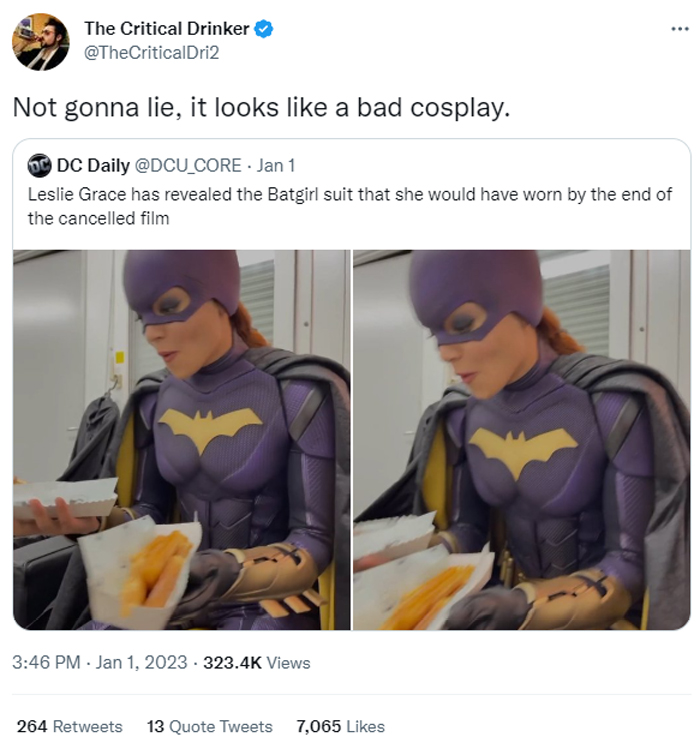 BiC: Apart from any potential sequels to Dark Harvest, what future novels and stories do you have planned, which genres will they cover, and will any of them become new series?

WJ: My work on Rogue Elements has kind of reinvigorated my interest in the Ryan Drake series, and since the series timeline only goes up to 2011, I think it would be interesting to pick up with Drake and the others in the present day as slightly older and wiser versions of themselves. I always wanted to leave that door open when I finished Something to Die For, and if I decide there’s still interesting stories to tell, maybe I’ll go back to it.

If my YouTube channel coming back to life after a decade of gathering dust has taught me anything at all, it’s to never say never.

Fans of Jordan can follow him on The Critical Drinker YouTube channels, and also can check out his merchandise, his Subscribestar page, and his Patreon page.

NEXT: While ‘The Rings of Power’ Crashes And Burns, ‘The Antediluvian Legacy’ Is Tolkien-Like Fiction Done Right