A new rumor details that Marvel Studios is looking to incorporate Blue Marvel into their rumored Agents of S.W.O.R.D. show.

The rumor comes from Mikey Sutton and first appeared on The Lords of the Long Box YouTube channel.

Lord of the Long Box host Tim Vo read the rumor saying, “The MCU might just be adding another scientific genius, and he’s a true Marvel. A Blue Marvel, in fact.”

Vo continued, “There has been speculation brimming for the Blue Marvel. A part of it is wishful thinking; the character has quite the cult following which has skyrocketed back-issue prices of his debut comic, Adam: Legend of the Blue Marvel #1 that came out in 2008.”

“There’s also the casting of Carl Lumbly in The Falcon and the Winter Soldier, which some feel is for the Blue Marvel and not Isaiah Bradley, the original black Captain America, the father of Patriot from Young Avengers. Again, this is speculation. Nothing based on rumor and/or gossiped conversations,” Vo read.

He then stated, “But when Blue Marvel appeared on a recent Long Term Spec List here at the Lords, my radar went off: Where did that come from? As I answered on Letters from the Longbox before, the Blue Marvel was brought up as a possibility; however, there was no development I heard about. That is, until now.”

Vo then elaborated, “I don’t know if this a recent development or it’s simply been hidden this whole time. The Blue Marvel is among characters being seriously considered for the S.W.O.R.D. project on Disney Plus. Whether that will be his MCU debut remains to be seen.”

He then explains why Marvel might be looking at Blue Marvel, “I am told that the Blue Marvel is highly appealing to Marvel Studios on multiple levels. First, he adds to the diversity Marvel Studios is seeking to expand.”

Vo concluded, “Secondly, he is well-suited for the increasingly cosmic direction the MCU is headed in. In fact, there has been discussions of including him in the Annihilation movie, possibly teaming up with the likes of Nova and Adam Warlock.”

However, despite his heroics and his loyalty to the United States of America, the President would ask him to cease his superhero activities and rewarded him with the Presidential Medal of Freedom.

He honored the President’s wishes and became a physics teacher and began raising a family. He would be recruited back into superhero duties by Tony Stark after the return of Anti-man, who he had previously defeated in the 1960s.

He is able to channel antimatter energy in a number of ways. He’s been known to use concussion beams, force bolts, as well as an optic blast. He can also create energy constructs and shields and power up his physical attributes with his antimatter making his punches lethal. He also has the ability to heal others through molecular manipulation.

Rumors regarding an Agents of S.W.O.R.D. series began circulating back in September from Mikey Sutton and were documented by YouTuber Matt Jarbo on his 3 Buck Theater channel.

Those rumors indicated that Chloe Bennet would reprise her role as Quake and she would be part of an Agents of S.W.O.R.D. team.

In November, a 4Chan post would also detail that “Marvel Studios is currently working on the CGI for an 8-episode Disney+ series for phase-four with the working title been S.W.O.R.D. and the first episode was written by Jon Favreau.”

That rumor would go on to detail that the cast of the show would include Samuel L. Jackson, Cobie Smulders, Cameron Monaghan, Katheryn Winnick, and Nicholas Hoult. The supporting cast would include Paul Mendelsohn, Sharon Blynn, Clark Gregg, Chloe Bennet, Ming-Na Wen, Natalia Buckley, and Jeff Ward.

Monaghan would play Victor Kohl, an Inhuman, with Winnick and Hoult playing Thanos’ progeny in Supergiant and Thane.

The same day this rumor dropped on 4Chan, Mitch of Comic Book Cast also detailed he had gotten wind of a show either based on Sword or Shield.

He posted to Twitter, “All I heard was Nick Fury in a show based on either Sword or Shield, they hadn’t decided and that they were thinking about Bennett being in it and that the show was moving fairly quickly.” 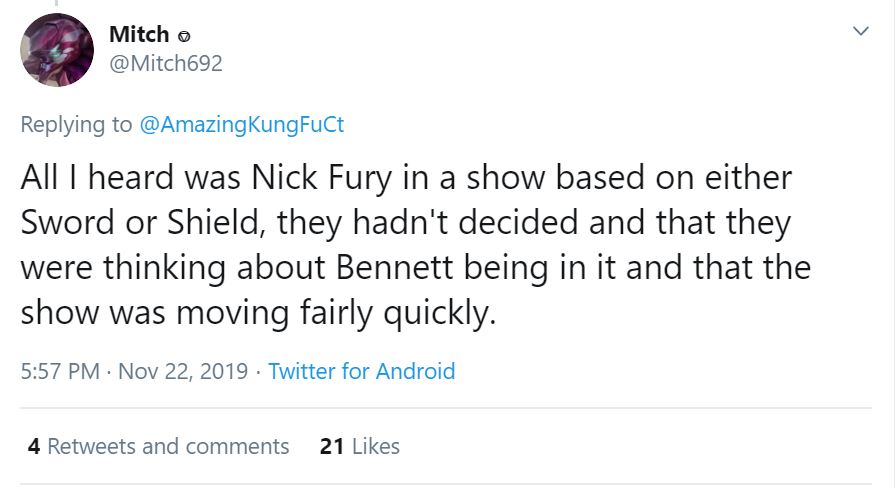 Sutton has also made other references to the S.W.O.R.D. show. Back in July he revealed a scoop to YouTube channel Everything Always detailing that the X-Men’s Beast would appear on the show.

Everything Always states, “According to Mikey Sutton’s inside sources, Beast will be appearing on Disney Plus’ upcoming but yet unannounced S.W.O.R.D. TV series.”

He also added that the show would be “a regular hotspot for other mutants and cosmic heroes that Marvel Studios looks to introduce and test to the general public.”

Sutton would also detail that S.H.I.E.L.D. would be transformed into S.W.O.R.D. and a number of Easter eggs were being placed in the final season of Marvel’s Agents of S.H.I.E.L.D.

We do know for a fact that S.W.O.R.D. will be introduced into the Marvel Cinematic Universe sooner rather than later, if it hasn’t already been introduced in the post-credit scene of Spider-Man: Far From Home where Nick Fury appears to be in some kind of space station that is under construction.

A photo from the set of WandaVision does show a S.W.O.R.D. officer guarding what appears to be a S.W.O.R.D.  government building.

What do you make of this rumor that Blue Marvel could be showing up on the rumored Agents of S.W.O.R.D. series? Would you want to see Blue Marvel appear in the Marvel Cinematic Universe?