Jessica Cluess, the Young Adult author behind the Kingdom of Fire series, has been dropped by and publicly denounced as a racist by her agent following what he described as “condescending and personal attacks” towards ‘antiracist’ educator Lorena Germán.

On November 30th, in response to the same discourse that prompted fellow YA author David Bowles’ vaudevillian rant advocating for the replacement of current American K-12 English curriculums with ones focused on YA literature, Germán asked her followers if they knew “that many of the ‘classics’ were written before the 50s.

She went on to state, “Think of US society before then & the values that shaped this nation afterwards.”

“THAT is what is in those books,” asserted Germán. “That is why we gotta switch it up. It ain’t just about ‘being old’.” 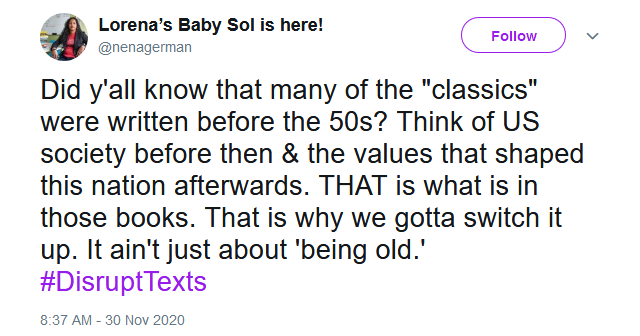 Germán, a prominent social justice activist and antiracist education advocate, is best known as the co-founder of “Multicultural Classroom,” an educational consultancy group that offers workshops and speaker sessions aimed at helping “participants understand the intersection of race, bias, education, and society” in order to “to reach as many as possible to see their impact and maximize their work toward social justice.”

This argument prompted a response from Cluess, who replied to a screenshot of Germán’s tweet with her opinion that “if you think Hawthorne was on the side of the judgmental Puritans in The Scarlet Letter then you are an absolute idiot and should not have the titled of educator in your bio.” 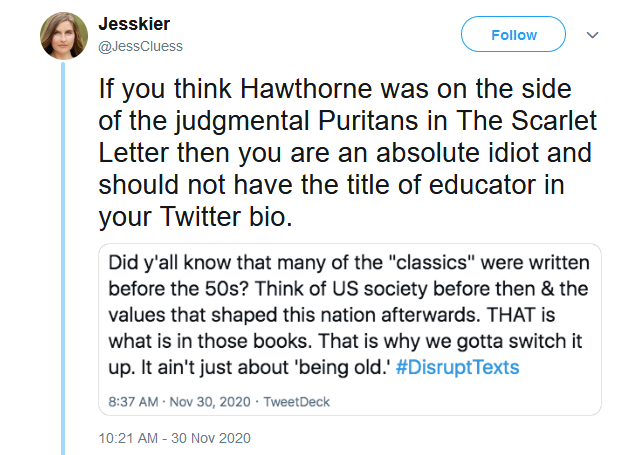 “This anti-intellectual, anti-curiosity bullshit is poison and I will stand here and scream that it is sheer goddamn evil until my hair falls out,” a frustrated Cluess added. “I do not care.”

In a series of now-deleted tweets, Cluess proceeded to insult a series of hypothetical rhetorical arguments that she proposed could result from viewing literature through the antiracist lens proposed by Germán.

“If you think Upton Sinclair was on the side of the meat packing industry then you are a fool and should sit down and feel bad about yourself,” said one tweet.

In another, she sarcastically remarked “that embodiment of brutal subjugation and toxic masculinity, [Henry David Thoreau’s] Walden,” before inviting those who unironically agreed with that statement to “Sit and spin on a tack.”

“Ah yes, remember Their Eyes Were Watching God, and other literature of the extraordinary Harlem Renaissance?,” she asked. “I guess not. Dick.”

Related: Lucasfilm and Kathleen Kennedy to Produce Adaptation of “Anti-Police” YA Novel Children of Blood and Bone

Cluess’ tweets soon caught the attention of Germán herself, to which the author stated that “what’s interesting to me is how I present a position on an academic point, and yet this 55%er decides to attack me personally over and over again,” before remarking that it “Sounds like I struck a confederate nerve.”

“Any of my White T friends wanna jump in and get your girl?” Germán added. “She’s big mad.” 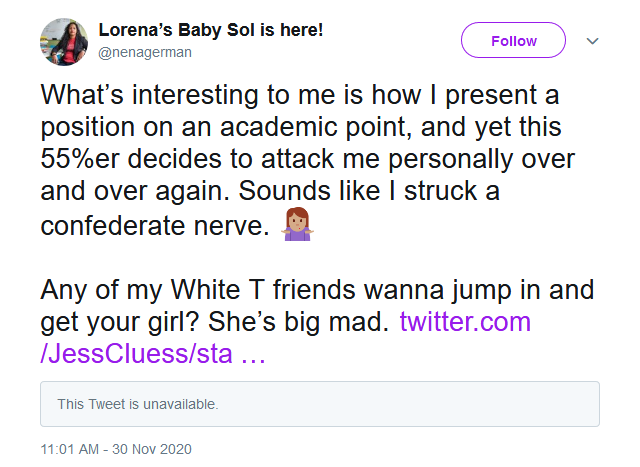 As a result of her comments regarding Germán, a non-white individual, and her disagreement with the widespread ‘diversity and inclusion’-based arguments being made for changing reading curricula nationwide, Cluess was soon branded a racist by users on social media, with many calling for her to be dropped by her publisher, Random House Kids.

English teacher Elizabeth Matheny asserted that Cluess’ thread “screams #whitefagility instead of making a point” and claimed that by not “engaging in a cordial debate” with Germán, she “missed out on a valuable learning opportunity.”

“I’m sure @randomhousekids wouldn’t want you talking to teachers like this, either,” Matheny passive-aggressively concluded. 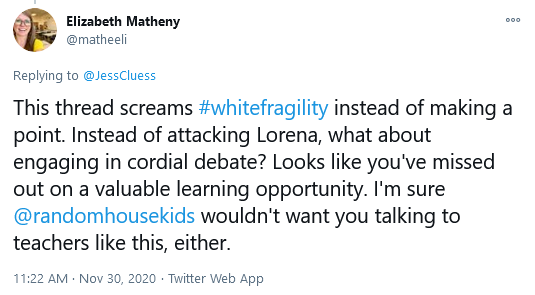 @CodyMillerELA whole-heartedly endorsed the call for Cluess’ cancellation, asking his “fellow white educators” to reach out to Random House Kids and “make sure [they] know what one of their authors is spewing.” 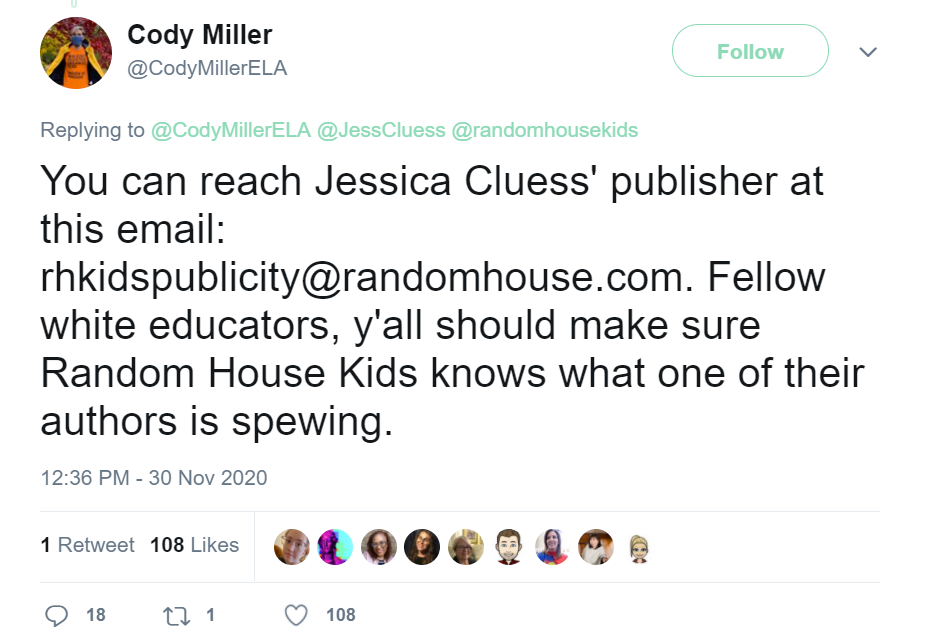 Miller sarcastically speculated that Cluess “will cry ‘witch hunt,’ ‘cancel culture,’ etc. etc. and then make a faulty and sloppy 1984 comparison,” before justifying his rallying of the outrage mob by claiming that Cluess’ tweet “isn’t criticism or intellectual engagement; it’s bullying!”

“So odd that, in all of your rants, you only mention one author of color, and indirectly at that (say her name!),” said @hweaties. “Your immediate defensive reaction belies your deep-seated bias. Time for some reflection.”

The backlash against her tweets would eventually prompt an apology from Cluess, who wrote that she wanted “to acknowledge the pain I caused, and to apologize sincerely for it” and admitted that her “words were misguided, wrong, and deeply hurtful.”

“I am committed to learning more about Ms. Germán’s important work with #DisuprtTexts,” relented Cluess. “I agree that what counts as canon in literature changes over time, and that it can be and should be contested and expanded to other, more inclusive kinds of text.”

“Again, I am deeply sorry. I will strive to do better.” 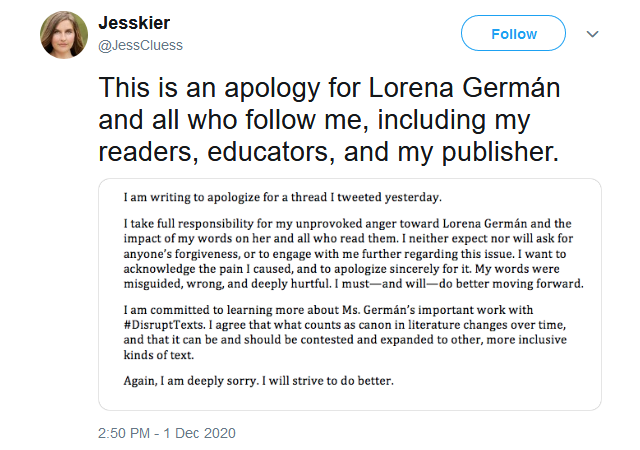 Inevitably, the calls for Cluess’ cancellation caught the attention of her agent, Brooks Sherman, who condemned “Jessica’s behavior” of “condescending and personal attacks on a Dominican American woman educator” as “deeply problematic and inexcusable,” declaring it to be “yet another example of the white privilege and systemic power imbalance that pervades the publishing industry and this country.”

“I realize that my silence up to now may have given the impression that I am indifferent to what took place yesterday, or even that I am complicit,” Sherman said December 1st.

“I promise this: I am listening, I am working to elevate the voices of those who have been historically marginalized in our industry, and I am committed to engaging in the hard conversations needed to move us all forward together,” he added. 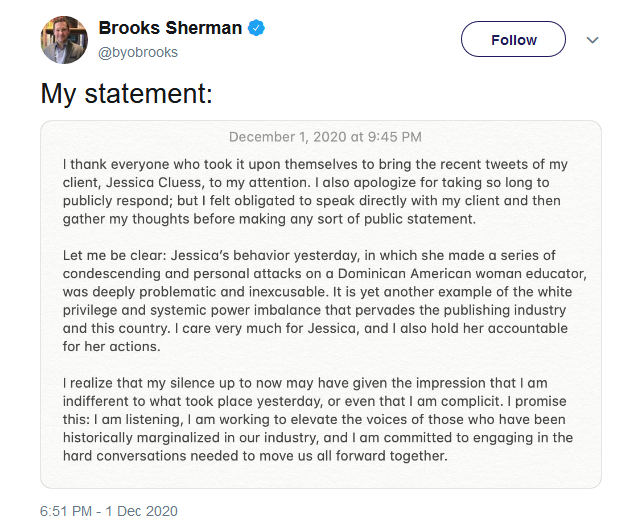 However, Sherman’s non-committal attempt to distance himself from Cluess was deemed unsatisfactory, and the agent was quickly inundated with a number of tweets demanding that he drop the author as his client.

On December 3rd, Sherman capitulated, announcing that because he held himself “to certain personal and professional standards for the values I support,” he would “no longer represent Jessica Cluess.”

“Her tweets against Loren Germán earlier this week were racist and unacceptable,” he concluded. 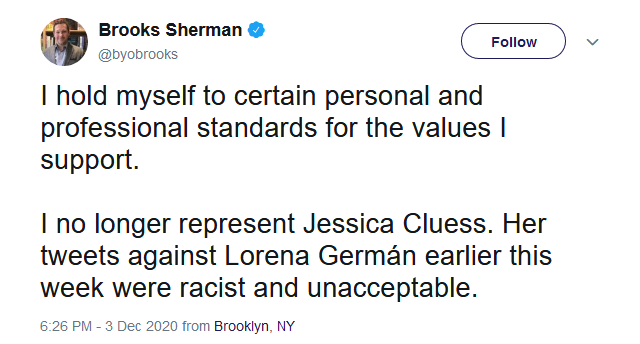 Novelist and comic book writer Jon Del Arroz, known for Flying Sparks and Colony Launch, responded to the controversy stating that the mob’s objective is to remove the classics.

He stated, “That’s what this Disrupt text is all about. They are literally trying to disrupt people’s reading of the classics. They don’t want you to be reading Mark Twain or The Scarlet Letter, Beowulf, or anything that is a real classic.” 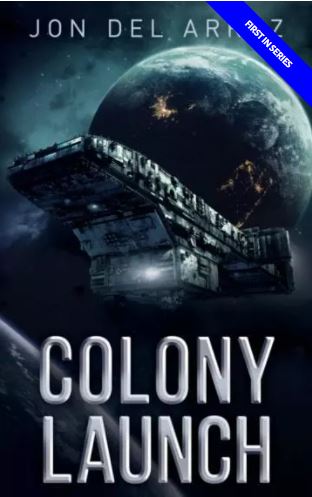 Del Arroz then described their tactics as book burning, “It’s literal book burning except you can’t burn books anymore. So they are just trying to force people to not read them, and force people to black list them on their lists of what should be taught to children and things like that. So that they get memory holed ”

“That is the only way you can really burn books anymore in the digital age and so that’s what they’re trying to accomplish,” he added.

What do you make of this controversy? Share your thoughts with us on social media or in the comments down below!