Marvel Cinematic Universe and Jurassic World star Chris Pratt has been targeted for cancellation once again, this time as fans have taken offense to a series of fake tweets which many believed to have been written and published by the actor. 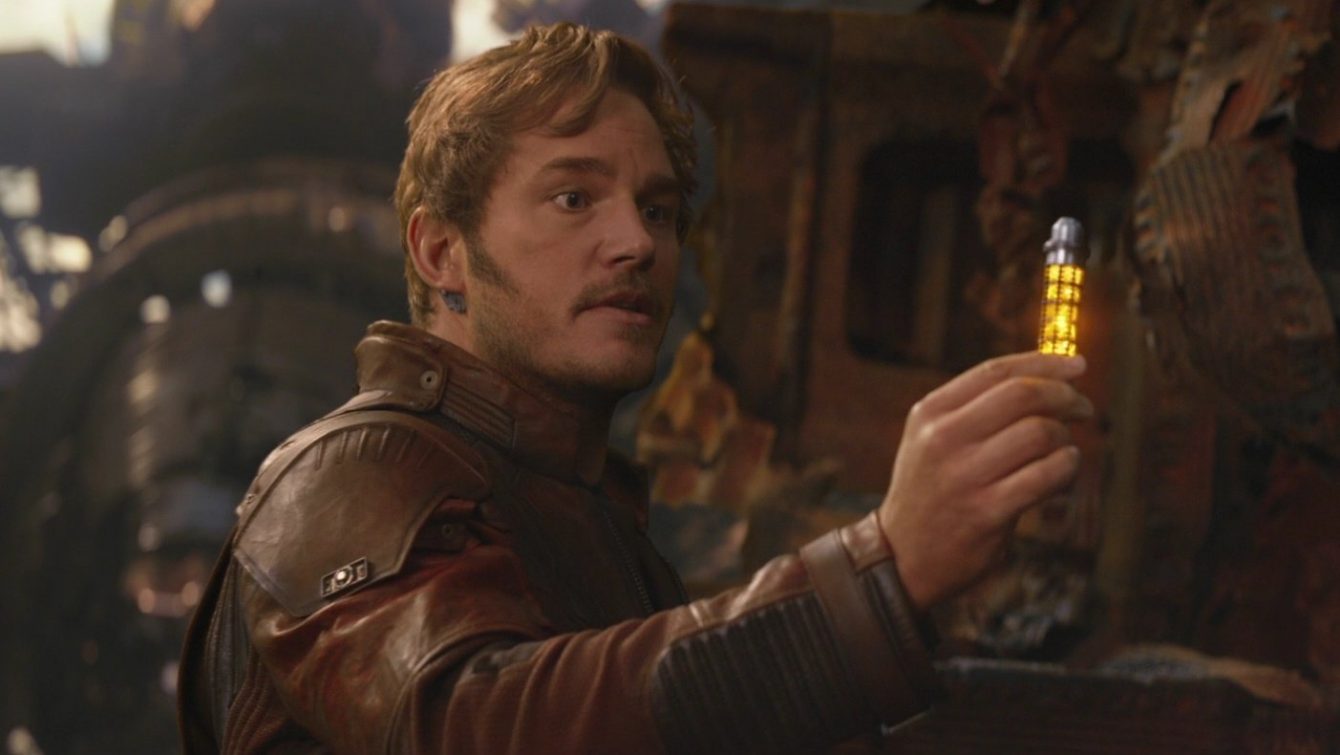 The fake tweets, which first began to circulate amongst Twitter users on February 3rd, appeared to capture a number of offensive statements made by the actor over the years, dating as far back as 2012. 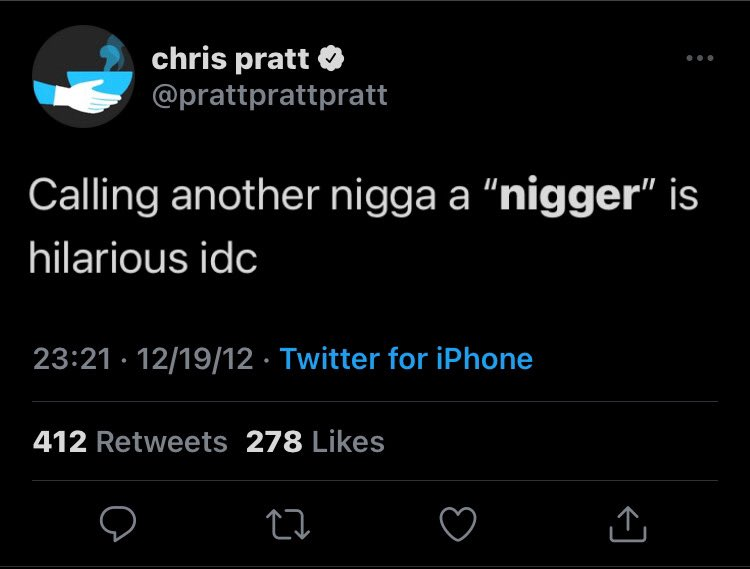 In another, which many users failed to notice features the same posting date, time, and number of engagements as the one above, Pratt appears to make an eating disorder-based joke, stating “#MissUniverse In a way they all look like Miss Hungry.” 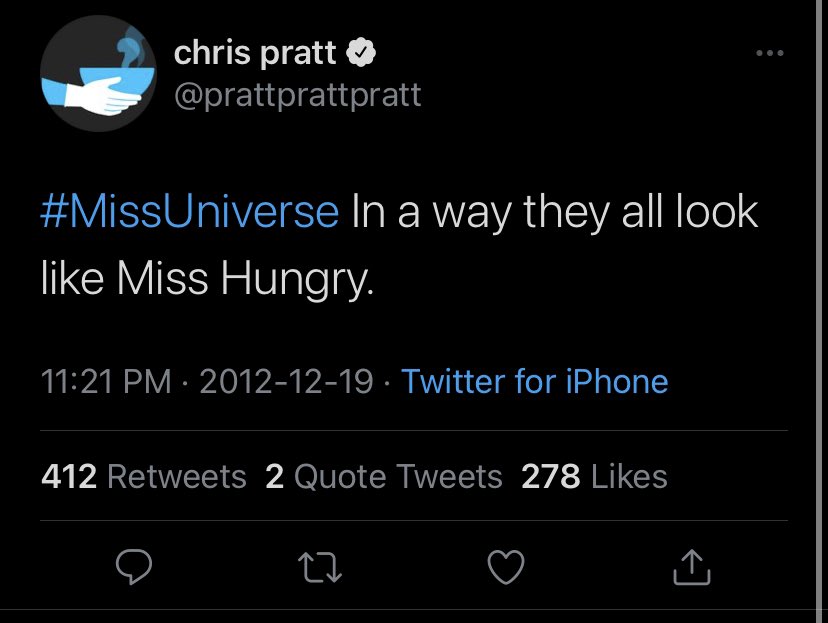 “Muslims scare me so much!!!” read another fake tweet.

Despite the allegations that these tweets came directly from Pratts feed, in reality, they appear to have been edited and distributed by a Marvel Cinematic Universe ‘stan’ chat group known as MBCGC.

The fake screenshots appeared to have first gained traction after being posted by user @CATGIRLISM, herself an apparent member of MBCGC, who shared the images to her personal Twitter account alongside the message “#ripchrispratt rest in peace? definitely not.” 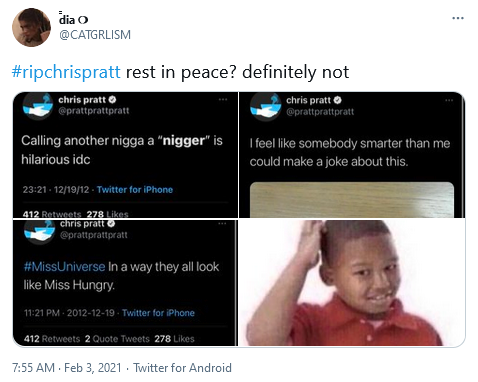 The tweets, according to one admitted member of MBCGC known as @REBEKAHSNAT, were made in order “to be a jokey joke to wake up MARVEL stan twitter”, though to what issue they wished to ‘wake’ fans up to was not specified. 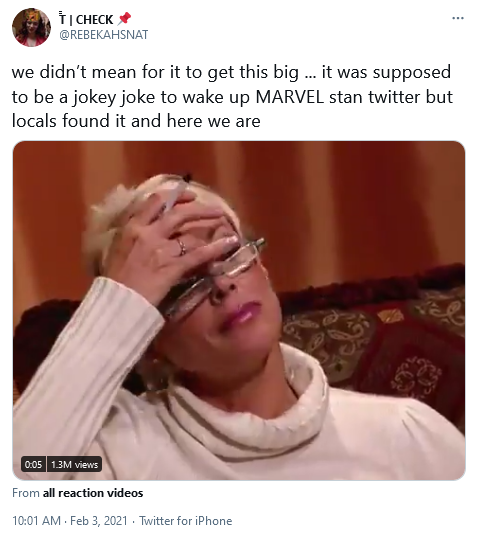 In fact, as the tweets began to garner widespread attention, another alleged member of the group, @iluv11pluto, called on fans to “normalize blaming chris pratt & jeremy renner for things they didn’t do!”

Interestingly, one tweet proven to have actually been published by Pratt was also cited, alongside the fake tweets, as justification for this latest cancellation campaign.

In this particular tweet, Pratt posted a picture of a Bank of America branded pen with the words ‘Made in China’ written on its side and wrote, “I feel like somebody smarter than me could make a joke about this.”

While many took this tweet to be an offensive joke at the expense of the Chinese people, it appears more likely that the photo was posted as a commentary on America’s constant and troubling outsourcing of its retail production to foreign nations. 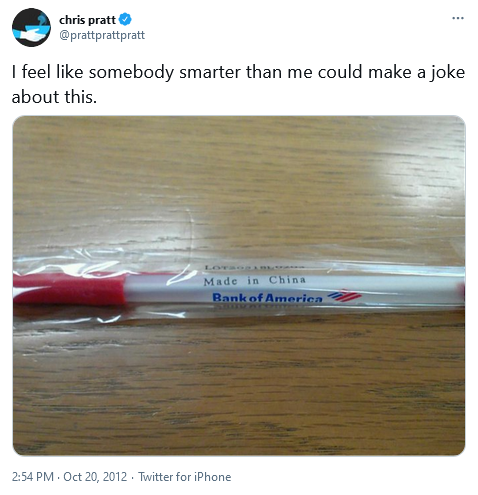 Of note, at the time of writing, Twitter has not made any clarifications or editorial positions regarding Chris Pratt currently trending on their platform.

It’s in stark contrast to the update they provided after Bounding Into Comics reported on a number of tweets from Star Wars: The High Republic Show host Krystina Arielle, where she accused white people of being racists. 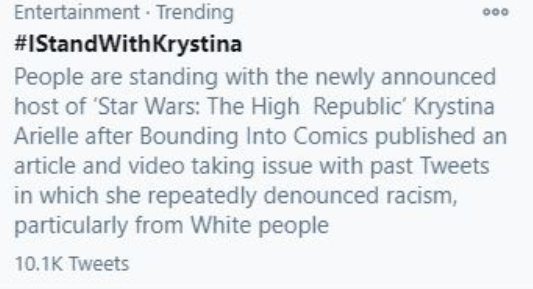 Unfortunately, Pratt is quite familiar with cancel culture and its modes of operation, as the internet has regularly taken issue with the actor based on his personal religious beliefs and desire to remain outside of the political spotlight.

Late last year, the actor was slammed on social media and accused of being a white supremacist for failing to appear alongside his Avengers co-stars during a virtual fundraiser in support of then-presidential candidate Joe Biden.

A later admission by Avengers: Infinity War and Endgame director Joe Russo that Pratt “was not asked to participate because he was halfway across the world in the wrong time zone,” did little to quell the outrage. 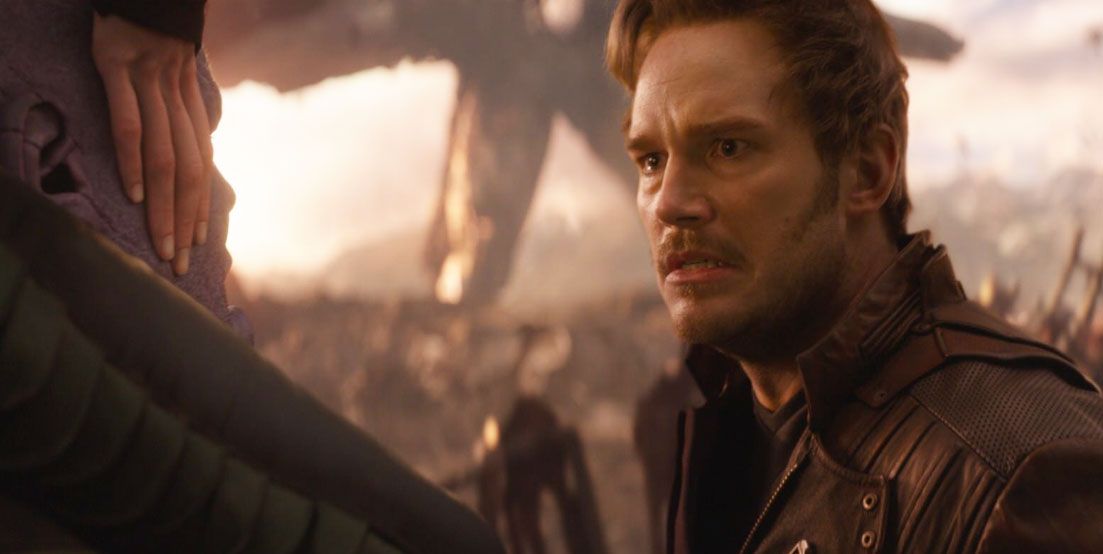 In October 2019, Pratt faced accusations of sexism after he teased his wife, Katherine Schwarzenegger, over the less-than-stellar meal produced by one of her attempts at cooking.

Most notably, that same year, the actor was attacked by actor Elliot Page, over his attendance of the Hillsong Church due to the church’s refusal to “affirm a gay lifestyle” or “have actively gay people in positions of leadership, either paid of unpaid.”

What do you make of this latest round of attacks against Pratt? Let us know your thoughts on social media or in the comments down below!