A small but very vocal contingent of western Genshin Impact players have called for a boycott of the game over their belief that various character depictions within the game promote racism and, in one instance, pedophilia. 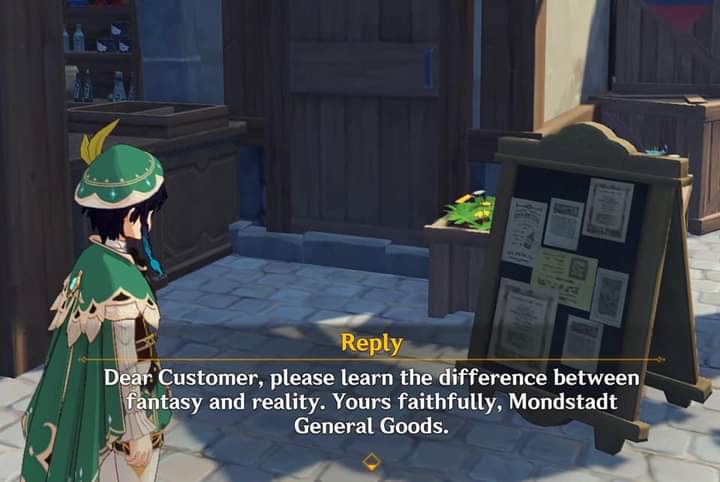 The outrage against Genshin Impact began on April 5th, when an information leak suggested that developer MiHoYo would be delaying their next updates, including the introduction of a playable Baizhu and new location The Chasm, in favor of continuing to profit from the unexpected financial success of the game’s current content.

This delay was the initial source of players’ calls to boycott the game, as many took to social media to voice their frustrations with MiHoYo’s rumored greed.

While initial complaints focused primarily on the delay, the sudden resurfacing of a 2020 video tour of MiHoYo’s studios, in which a Genshin Impact developer can briefly be seen referencing footage of Native Americans dancing while designing the Hilichurls, quickly turned the conversation to accusations of racism.

“#boycottgenshin IVE BEEN WAITING FOR THIS MOMENT..,” wrote user @venluvr. “did yall know that mhy used indigenous people as reference for hilichurls?? they’re not even hiding it” 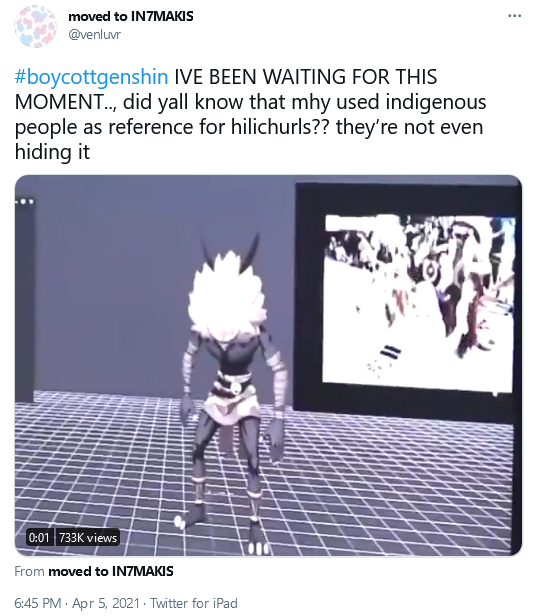 Though many were suspiciously quick to associate real world peoples with a character simply because of one aspect of their inspiration, as noted by user @zacindoldrums, “hilichurl dances were inspired by indigenous dances, but to simply vilify them is a stretch.”

“This does not mean that indigenous people are evil or are mocked,” they added. “For godsake, they made chibi versions from in the slime paradise event and what about ella musk’s comission quest?”, referencing an in-game quest wherein the player helps NPC Ella Musk in finding Hilichurls to practice speaking their language with. 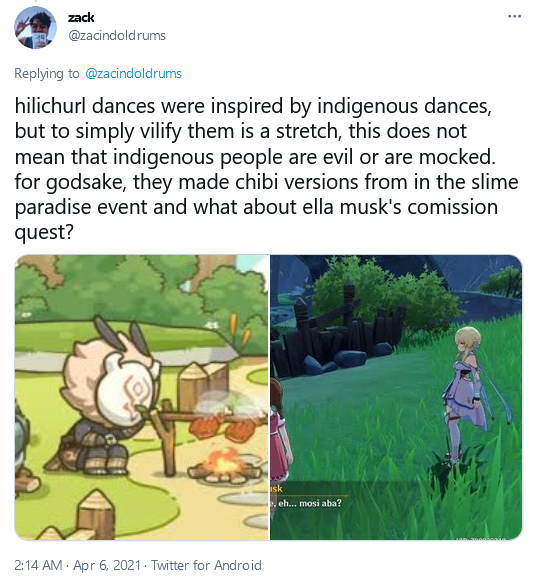 Unsurprisingly, the accusations of racism were not limited to the Hilichurl, as players soon after took to accusing MiHoYo of racism based on the respective descriptions of Xinyan and Kaeya.

Of the former, players took issue with how her description noted that she was “often maligned, the fierce appearance making her look like some incorrigible villain,” assuming the public’s feelings of terror to be based on her skin color.

“#boycottgenshin this is how your ‘darkskin’ characters should look. not 2 shades below pale,” wrote @xinyanluvsu, sharing a picture presumed to be themselves cosplaying the character. “not fluctuating tones. they should have darkskin. also we’re not exotic and scary u can write darkskin characters without using colorism and racism as a big plotpoint :)”. 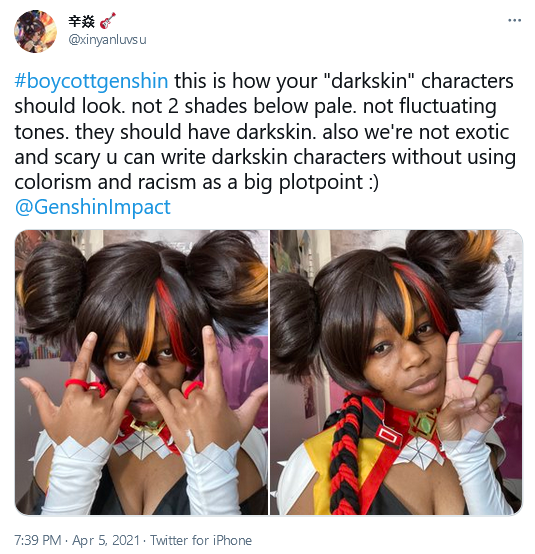 It’s important to remember that context matters, as when taken in with her full description, it’s clear to see that the fear felt by the townsfolk is a reaction not to her darker skin tone, but her fierce, ‘punk rock’ style. 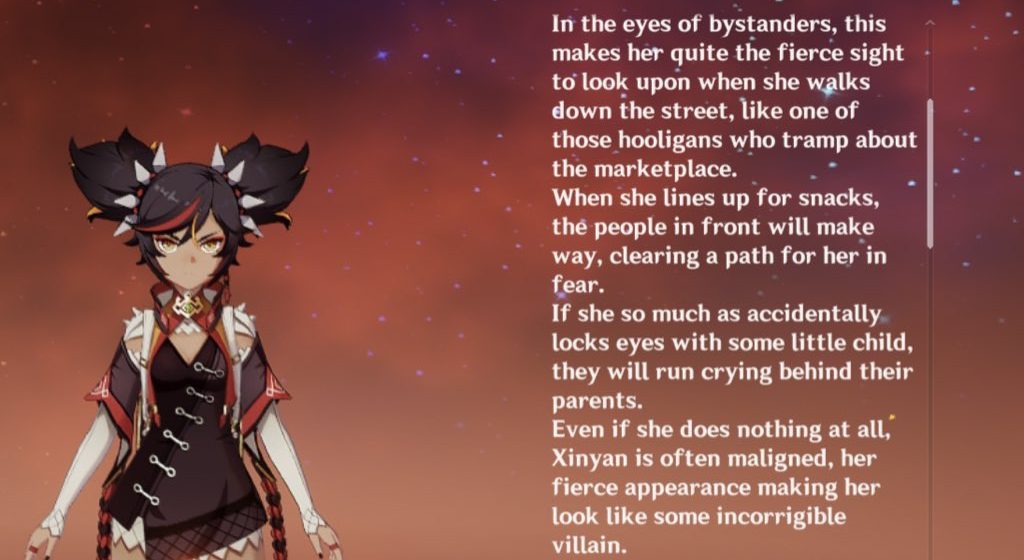 In the case of Kaeya, players pointed to his brief, start menu description as someone “with a somewhat exotic appearance,” as evidence of MiHoyo’s racism.

“kaeya is described to have an “exotic” appearance that is literally so weird like why did they feel the need to put that in?” asked @OIKAW4S

However, like the aforementioned complaint against Xinyan, Kaeya is not described as “exotic” due to his skin color. He is likely noted as such due to both his ostentatious fashion style in comparison to the rest of Monstadt’s citizens and origin in a different country. 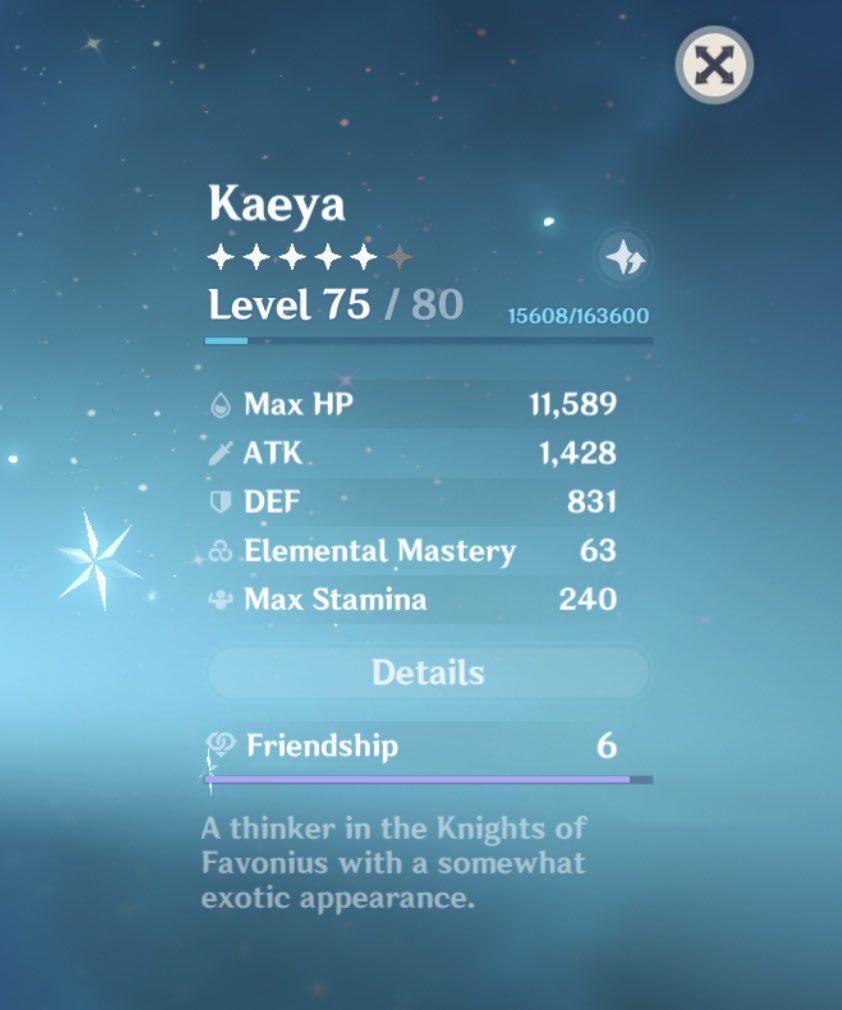 In support of the latter point, as noted by @tudou_mi, “in [Chinese] he’s referred to as 异国的. 异 meaning “different”, 国 meaning “country” and 的 just turns the phrase into an adjective.”

“If you were to paste this into Google translate it would translate to “exotic” but the thing is google translate cannot pick up on the connotations between words and their cultural/historical background,” they added.

Some even expressed anger towards a piece of dialogue between Paimon and Venti in which the former wonders if Kaeya would have lighter skin underneath his eyepatch, such as @eulakisser, who questioned “these remarks toward kaeya”. 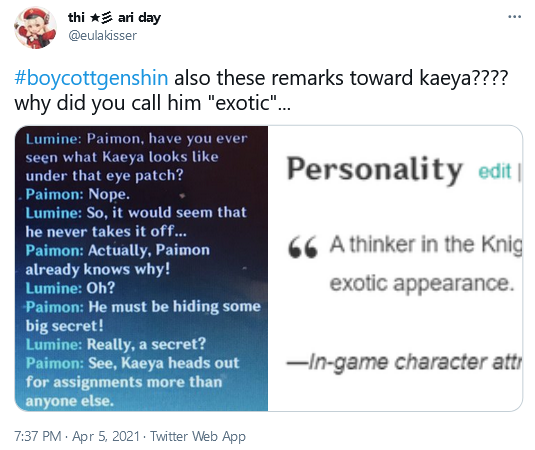 Bizarrely, such complaints ignored the scientific fact that skin that is not constantly exposed to the sun will be lighter than skin that is, regardless of inherent skin color. 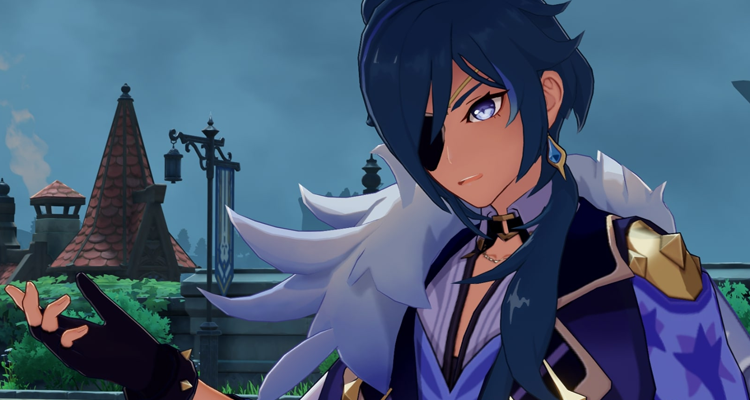 As for the accusations of pedophilia, these regarded a piece of dialogue spoken by the NPC Ulfr referring to his deep love for another NPC, Flora. 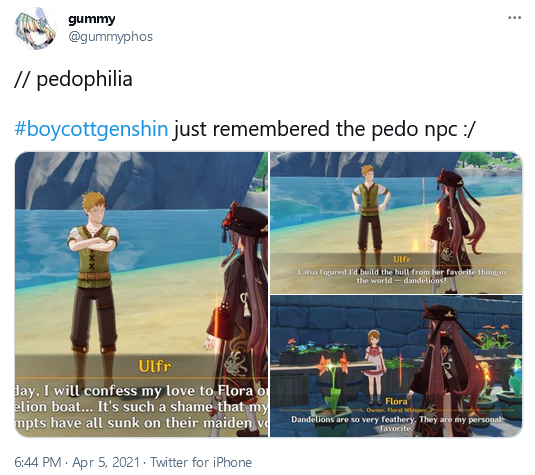 “One day, I will confess my love to Flora on board a dandelion boat,” says Ulfr upon speaking to him on the shore of Cider Lake. “It’s such a shame that my last few attempts have all sunk on their maiden voyages.” 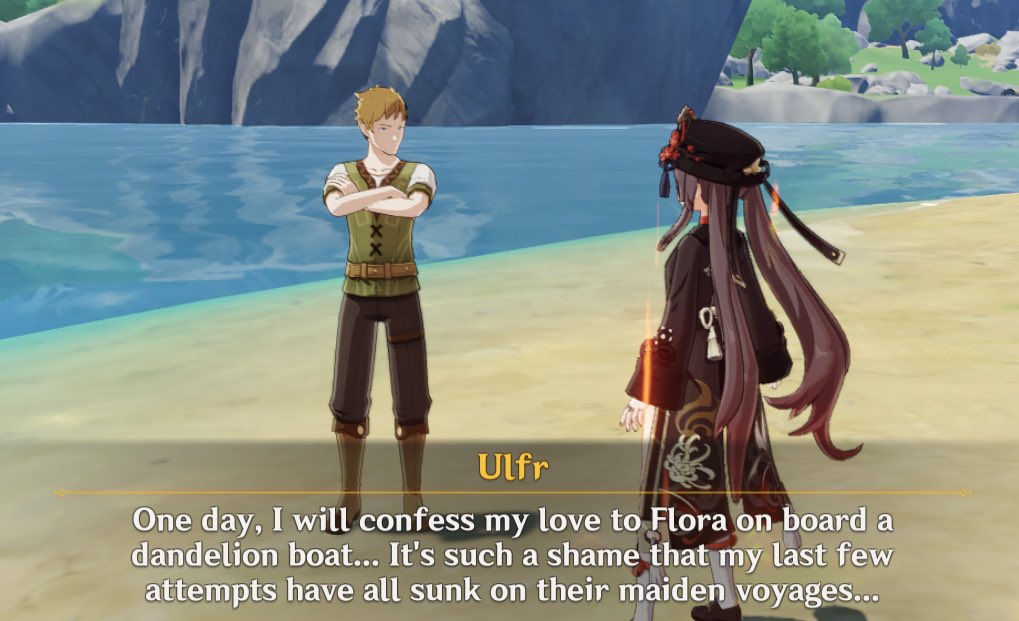 Flora is the young and clearly underage owner of Monstadt’s signature flower ship. 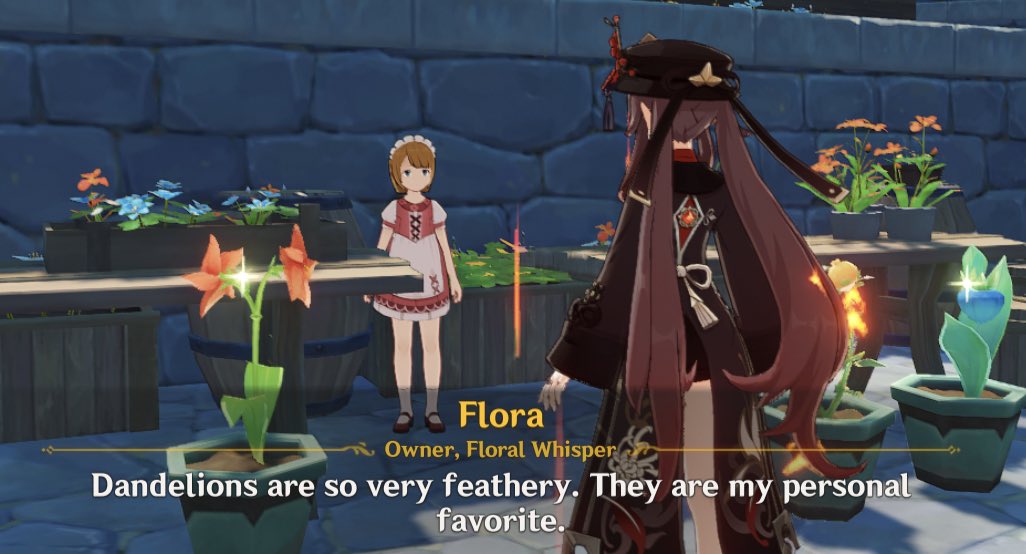 While this dialogue is undeniably pedophilic, this is due to a clerical error that occurred between Genshin Impact’s beta and full release, rather than any intentional endorsement of pedophilia on MiHoYo’s part.

In the beta, Flora was depicted as an adult woman, at which time Ulfr’s love was thoroughly unproblematic. Unfortunately, upon the game’s full release, MiHoYo updated Flora’s character model but forgot to likewise update this instance of dialogue. 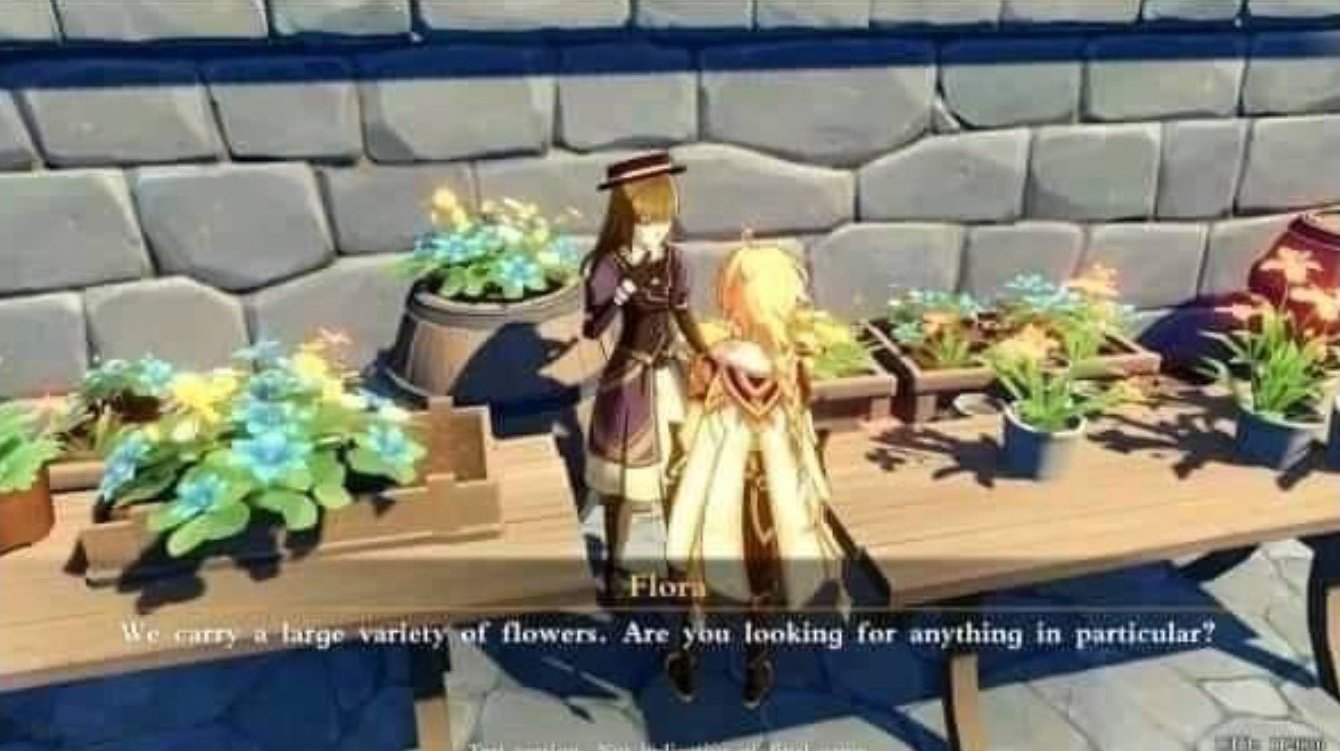 Unfortunately for these upset fans, it’s unlikely MiHoYo will respond to their complaints.

Genshin Impact’s Terms of Service explicitly state that the company “CANNOT GUARANTEE THAT YOU WILL NOT ENCOUNTER CONTENT THAT YOU CONSIDER OFFENSIVE OR OTHERWISE INAPPROPRIATE” and accepts no liability for “ANY FAILURE TO REMOVE (OR DELAY IN REMOVING) ANY SUCH CONTENT”.

What do you make of the complaints against Genshin Impact? Let us know your thoughts on social media or in the comments down below!