The next Shazam movie – Fury of the Gods, the sequel to the hero’s 2019 big-screen debut – is currently in production in Atlanta, and as such, behind-the-scenes snapshots beginning to creep up.

Following the recent surfacing of a video showing the film’s controversial star Rachel Zegler filming on a rooftop in costume as her as-of-yet-unknown character, similar material catching a glimpse of Helen Mirren, who we now know plays Zegler’s sister, is now starting to make the rounds across social media.

As seen in new images shared by Just Jared, Mirren can be seen standing next to lead Zachary Levi wearing some form of mythic Greek armor and a horned crown – a seemingly dead give-away that she is playing some sort of villain.

The above pic, which may contain a light spoiler, is interesting. It could show Mirren and Levi having lunch, but it’s also likely that the two could be in the middle of filming or rehearsing a scene where the villainess confronts Shazam as he chows down on a burger, as such a moment would be textbook Billy Batson. 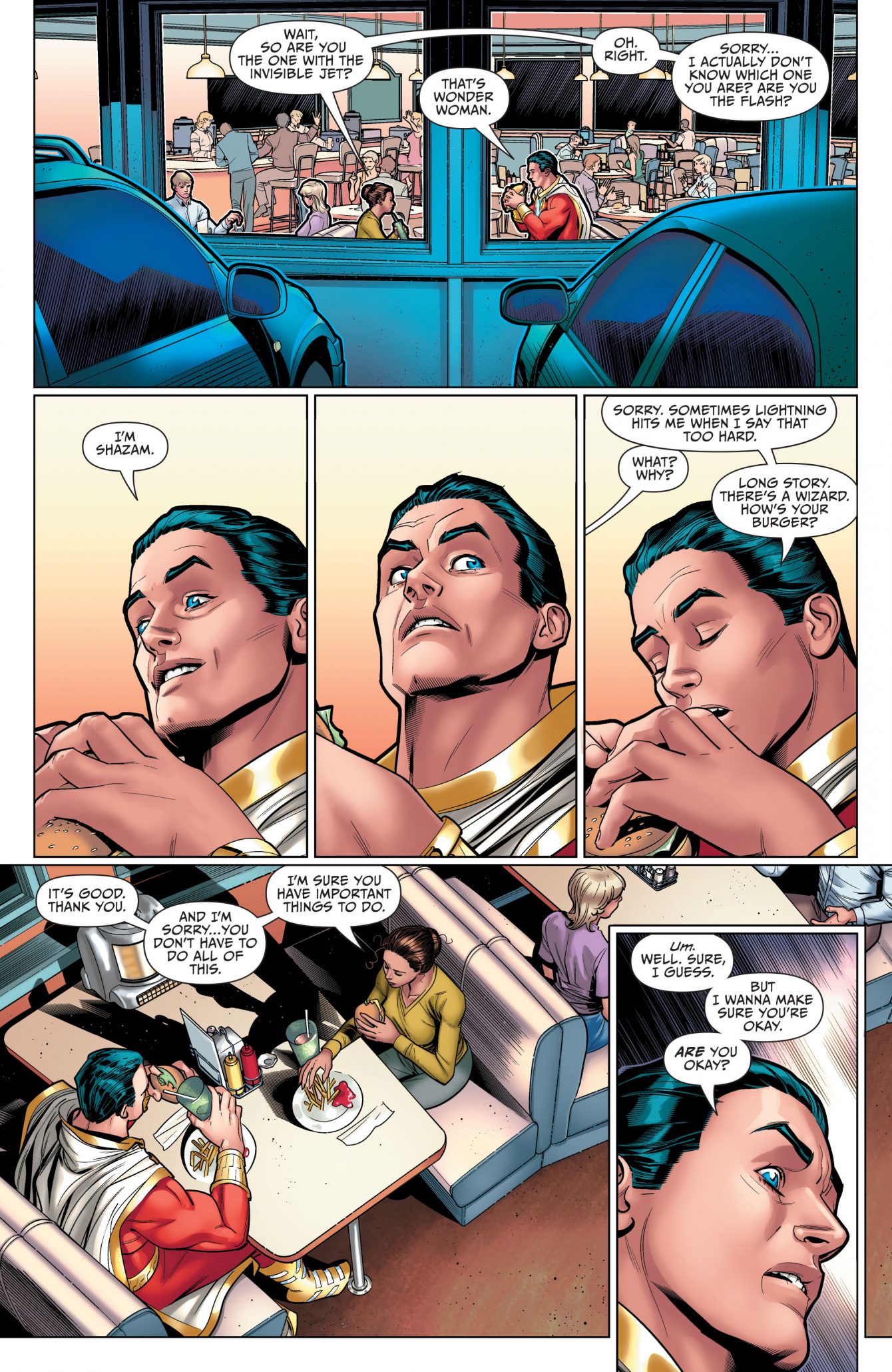 Related: Hawkman Squares Off Against Shazam As Actors Aldis Hodge And Zachary Levi Take To The Golf Green

Just Jared further highlighted the pictures on Twitter, asserting, “here is your first look at Helen Mirren as Hespera in the upcoming #Shazam2.”

Here is your first look at Helen Mirren as Hespera in the upcoming #Shazam2. Check out the new set photos! https://t.co/wNfzRwkVWo

As noted by Just Jared, Mirren is playing Hespera, one of the three sisters and a daughter of Atlas. Aside from holding the world on his shoulders in mythology, Atlas is also the deity from whom Shazam gets his stamina.

Given this family relation, Hespera and her sisters could have a deeper connection to the DC hero than we’re aware of – one going back to ancient times.

If it’s not the power of Atlas it may relate to golden apples guarded by the three siblings, called Hesperides, which had to be retrieved by another of Shazam’s avatars, Hercules, during his 12 labors. 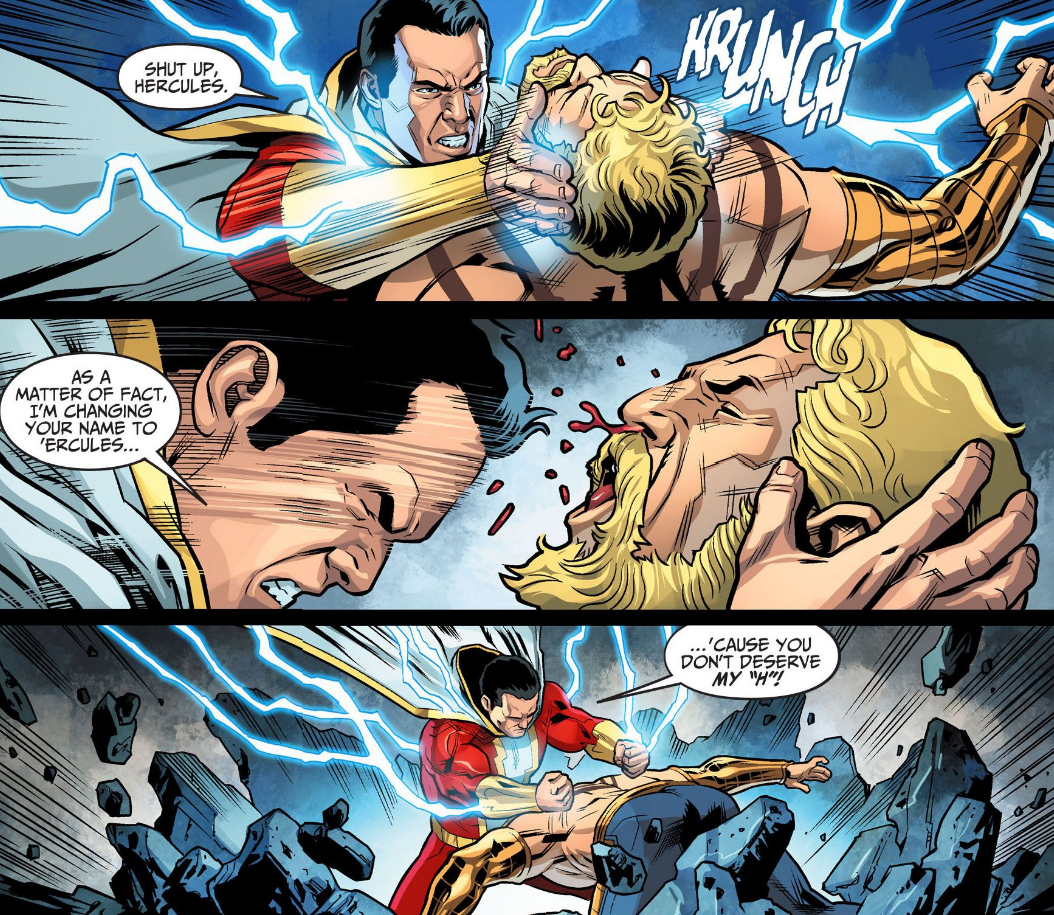 So far, the plot has been kept heavily under wraps. All we know is that Lucy Liu will play the only sister named so far, Kalypso.

While the name of Zegler’s character isn’t known, it’s fairly certain that she will play the youngest of the three sisters and will attended high school with Billy Batson and Freddy Freeman.

Notably, it looks like the suit’s cape not only got longer since the last film, but also completely ditched its previously-seen hood. 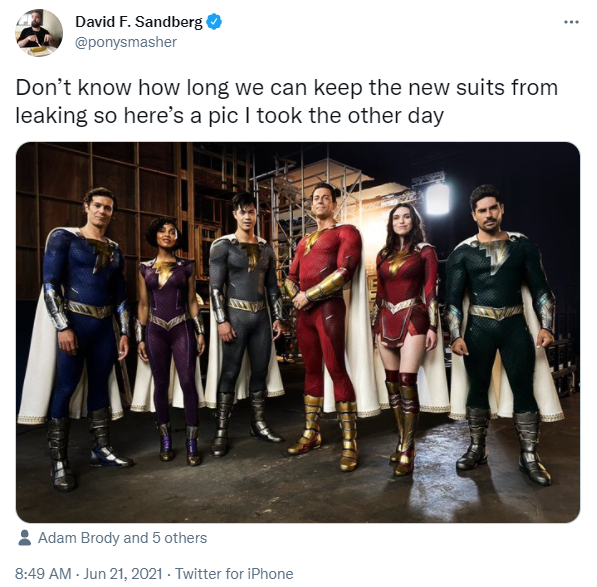 As seen in a tweet made by user Luiz Fernando, the images of Mirren are lighting up Twitter.

“So cool to see #HelenMirren having her due with a badass evil goddess costume as #Hespera, evil daughter of #Atlas, in #ShazamFuryOfTheGods,” wrote Fernando. “Also, taking a villain to crack on some junkies is something only #Shazam himself would do haha.”

He concluded, “#Shazam2 will be a blast and it shows.”

So cool to see #HelenMirren having her due with a badass evil goddess costume as #Hespera, evil daughter of #Atlas, in #ShazamFuryOfTheGods.
Also, taking a villain to crack on some junkies is something only #Shazam himself would do haha.#Shazam2 will be a blast and it shows 🤩 pic.twitter.com/70q1IM80M4

Expect more candid shots from the set of Shazam: Fury of the Gods in the near future, especially between now and the next DC FanDome in October. They have plenty of time to leak as much as they can allow since the film doesn’t hit screens until 2023.

Got any thoughts? Tell us what you think of Mirren’s Hespera and her costume on social media or in the comments down below!