Related: Helen Mirren Spotted In Costume As Villain Hespera Beside Zachary Levi On The Set of Shazam: Fury Of The Gods

The footage, originally posted to the /r/DCEUleaks subreddit, shows Zegler, who allegedly plays one of the evil sisters that challenges the Shazam family, in costume kissing Grazer, who plays Freddy Freeman.

There’s not much to go on based on the brief clip. The kiss shared between the two could be part of Zegler’s plan to put Grazer under a spell, or it could just be the boiling point of a crush which she can’t help but express.

Related: Hawkman Squares Off Against Shazam As Actors Aldis Hodge And Zachary Levi Take To The Golf Green

Zegler can be seen wearing a Hellenistic-looking super outfit, which suggests that the actress is a probable lock for one of the villains. Plus, it’s a foregone and obvious conclusion that she has some link to Freddy and the rest of the Marvel family, dubious as it possibly is.

The exact identity of her character, however, is still a mystery. Cast in February, Zegler recently stated during an Instagram Live stream that nobody has correctly guessed her role yet, a fact which she finds funny.  “Everyone thinks they do [know what it is] which is really funny and they’re all wrong, which is why it’s hilarious,” she said.

Rachel Zegler says that her #Shazam: Fury of the Gods character has not been correctly guessed…(yet). pic.twitter.com/vaQWLjshdZ

Should she be playing a foe, it’s rumored Zegler will turn to the good side, thanks to Freddy, and fight against her Hesperides sisters, Hespera and Kalypso, played by big-time names Lucy Liu and Helen Mirren.

If that’s the case, , wherever this scene falls into the script, Levi’s presence and reaction in the scene could be an indication that Billy doesn’t trust her and worries about her influence over Freddy.

Distrust on Billy’s part may be endemic to the essence of his avatars, especially Atlas and Hercules, as the Hesperides are Atlas’ daughters, the same ones who stood guard over the golden apples Hercules had to retrieve during his 12 Labors.

Thus, it’s possible that film’s secretive plot might have something to do with the sisters’ daddy issues, having never gotten over the Son of Zeus taking some of their sacred fruit. 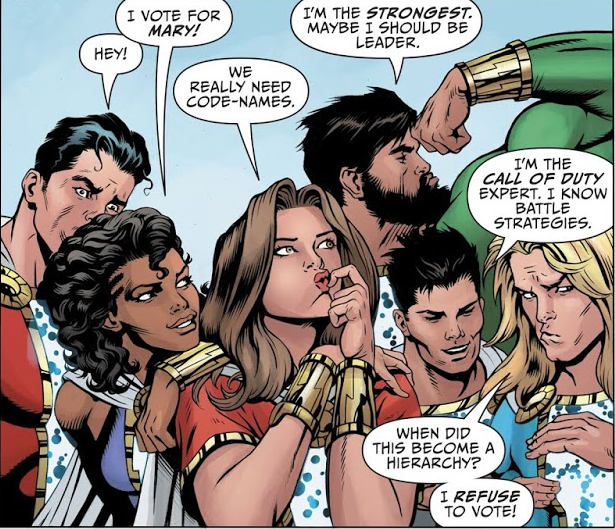 Whatever the scene means to the plot of the Shazam! Fury of the Gods, fans won’t find out for at least two years, as the David F. Sandberg film is currently slated for a June 2, 2023 release.

Who do you think Zegler will be playing? Do you think we’ve correctly ID’d her character? Let us know your thoughts about the footage on social media or in the comments down below!