As new information regarding the film’s production is revealed, it becomes more evident that this tragic incident could’ve easily been avoided had its producers, including Alec Baldwin himself, had addressed the crew’s concerns regarding safety measures on the set.

Actor Adam Baldwin recently weighed in on the the shooting involving Alec Baldwin, urging the Rust actor and producer to “throw himself on the mercy of the court” on account of his negligence on the set of the upcoming western film.

Before we begin it is worth pointing out, for those who may not be aware, that Adam Baldwin is in no way, shape, or form related to Alec Baldwin. Further, and unlike Alec, Adam Baldwin is a gun owner that actually knows how to operate firearms.

Both his experience as an actor in Hollywood and as a gun owner give Adam Baldwin sound insight regarding safety measures on movie sets, and he’s taken to social media to share some of that experience to those still wondering what happened on the set of Rust. 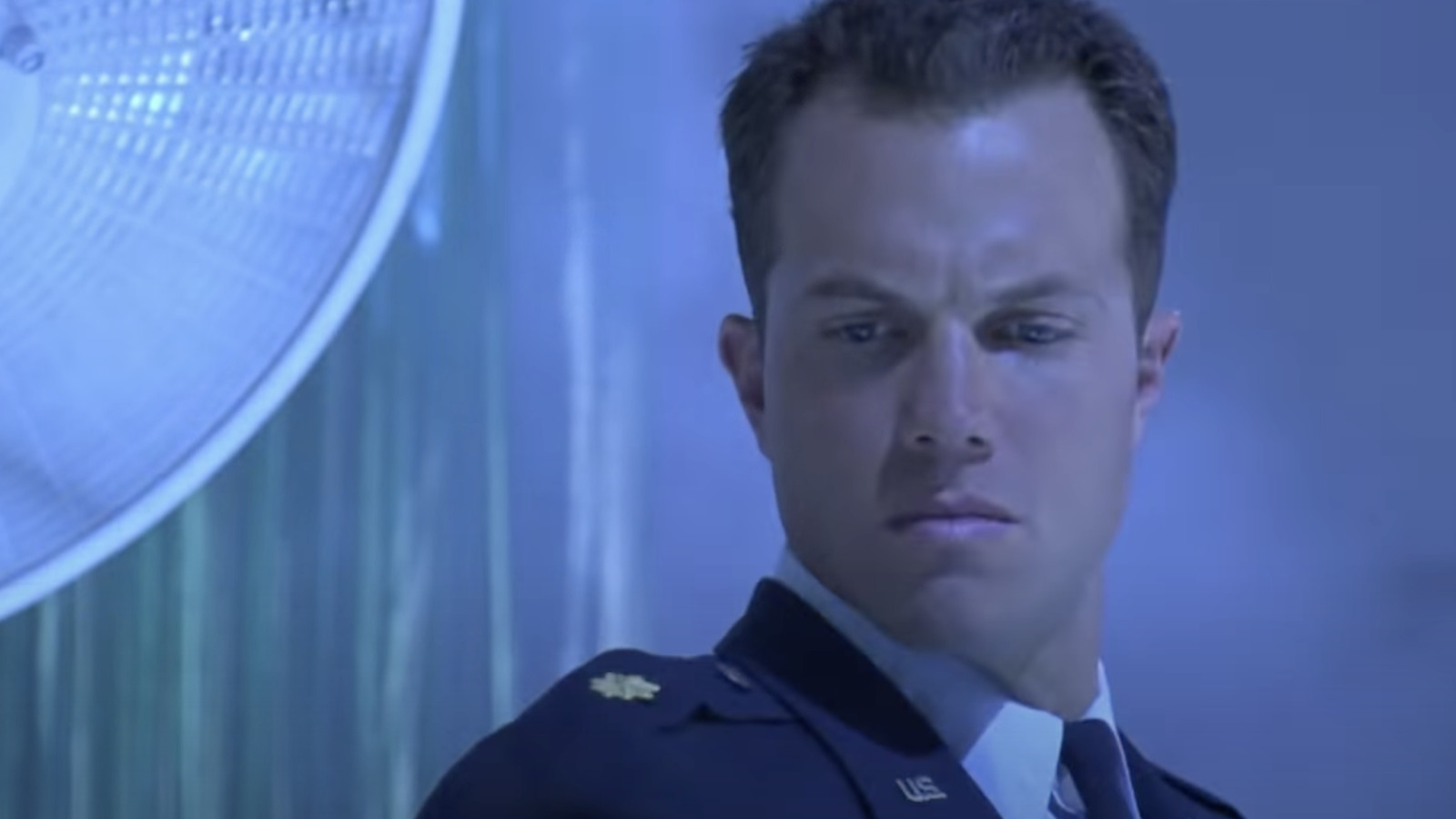 “He won’t take it, but there’s good advice out there for Alec now to man up, confess and throw himself on the mercy of the court (both legal & public opinion) and $ pay $ for his negligence/recklessness,” wrote the Independence Day actor. 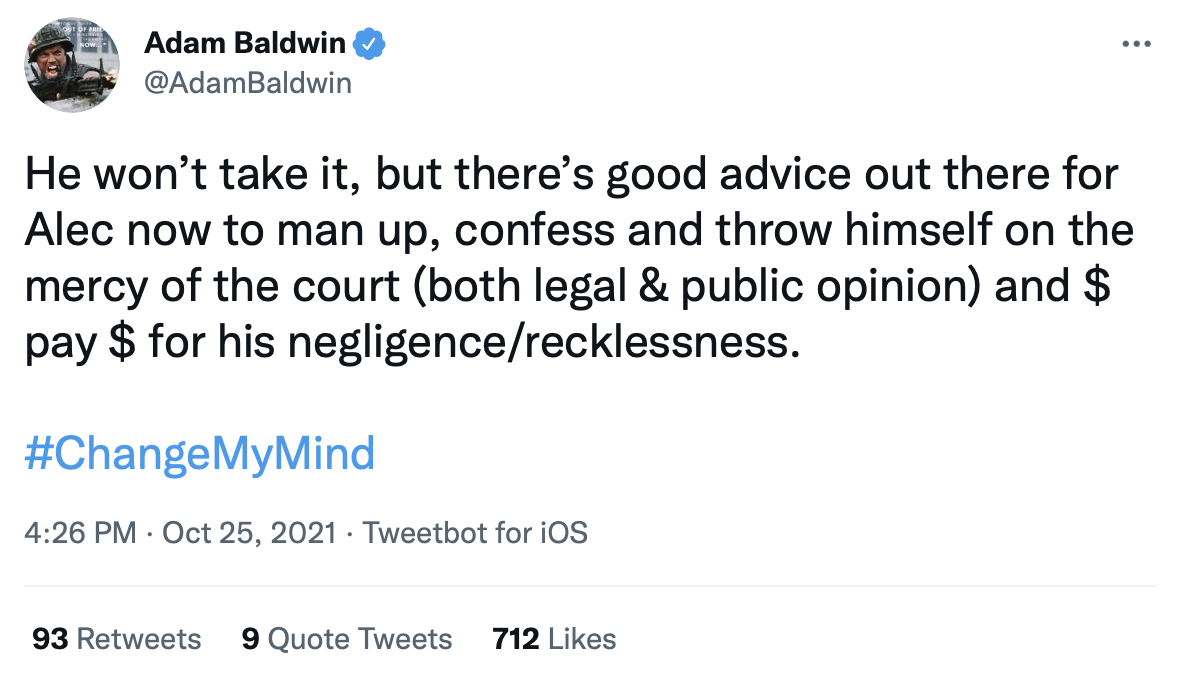 As an observation, Baldwin also notes that “the PR reaction team that was deployed in the media & online last Thursday and through the weekend was inept in controlling the narrative” regarding the shooting involving Alec Baldwin.

He added, “Because a) their ignorance of firearms in general and gun safety in particular & b) the facts of the tragedy were cut and dried.” 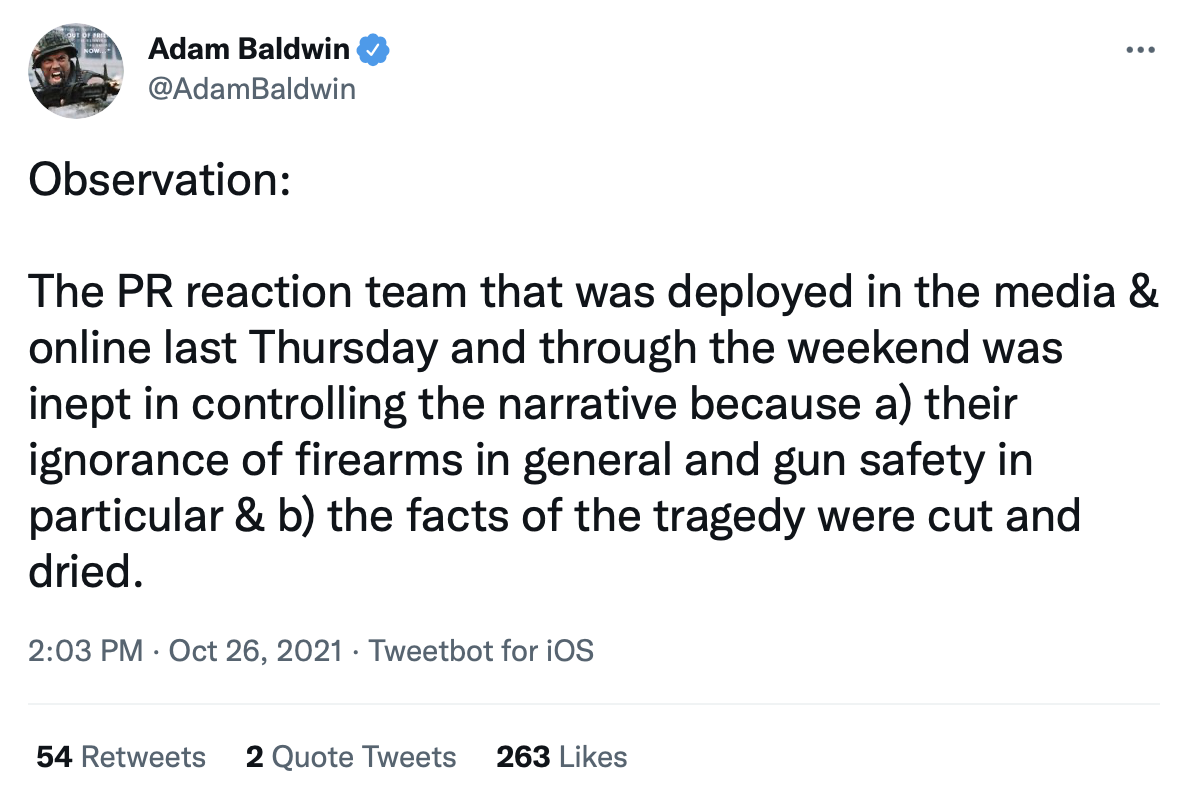 In a follow-up tweet, the Serenity actor further explained, “In fact, the PR rapid response team’s Carvillian and media flacks instincts have unwittingly harmed a client that – had he simply confessed and taken full responsibility, pleaded for mercy and made restitution – would face financial loss. Maybe he’ll be charged. Maybe not.” 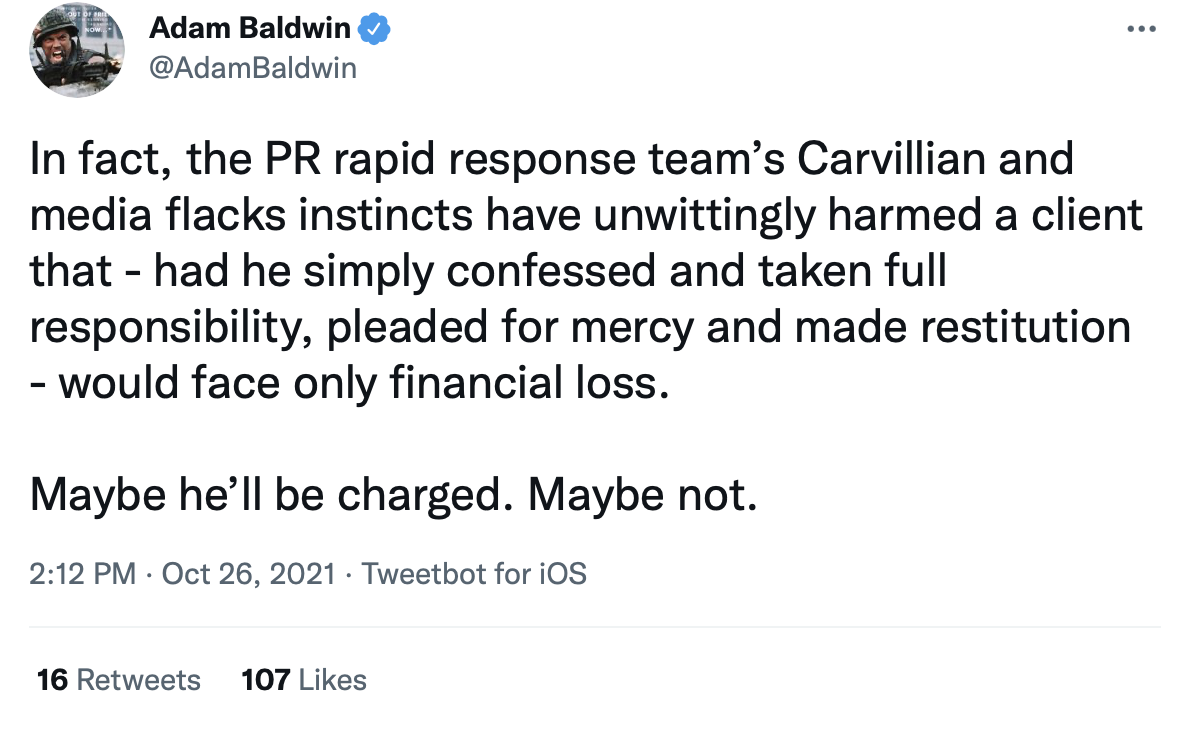 Baldwin continued, “Or, he’ll face a trial so that lawyers can hoover up all of his $,” adding , “He’d plead down before a potential trial drags on…”

Earlier this week, Adam Baldwin corrected the language used in and article published on Fox News, fervently stating that “Firearms don’t just ‘go off.’ Trigger must first be pulled.”

Baldwin quoted the article and added in the words he’d change, seen in brackets, writing,  “Alec Baldwin accidental [negligent] shooting details emerge: [He] was practicing [rehearsing] for a scene on the movie ‘Rust’ when [he cocked & pulled the trigger so that] his firearm went off.” 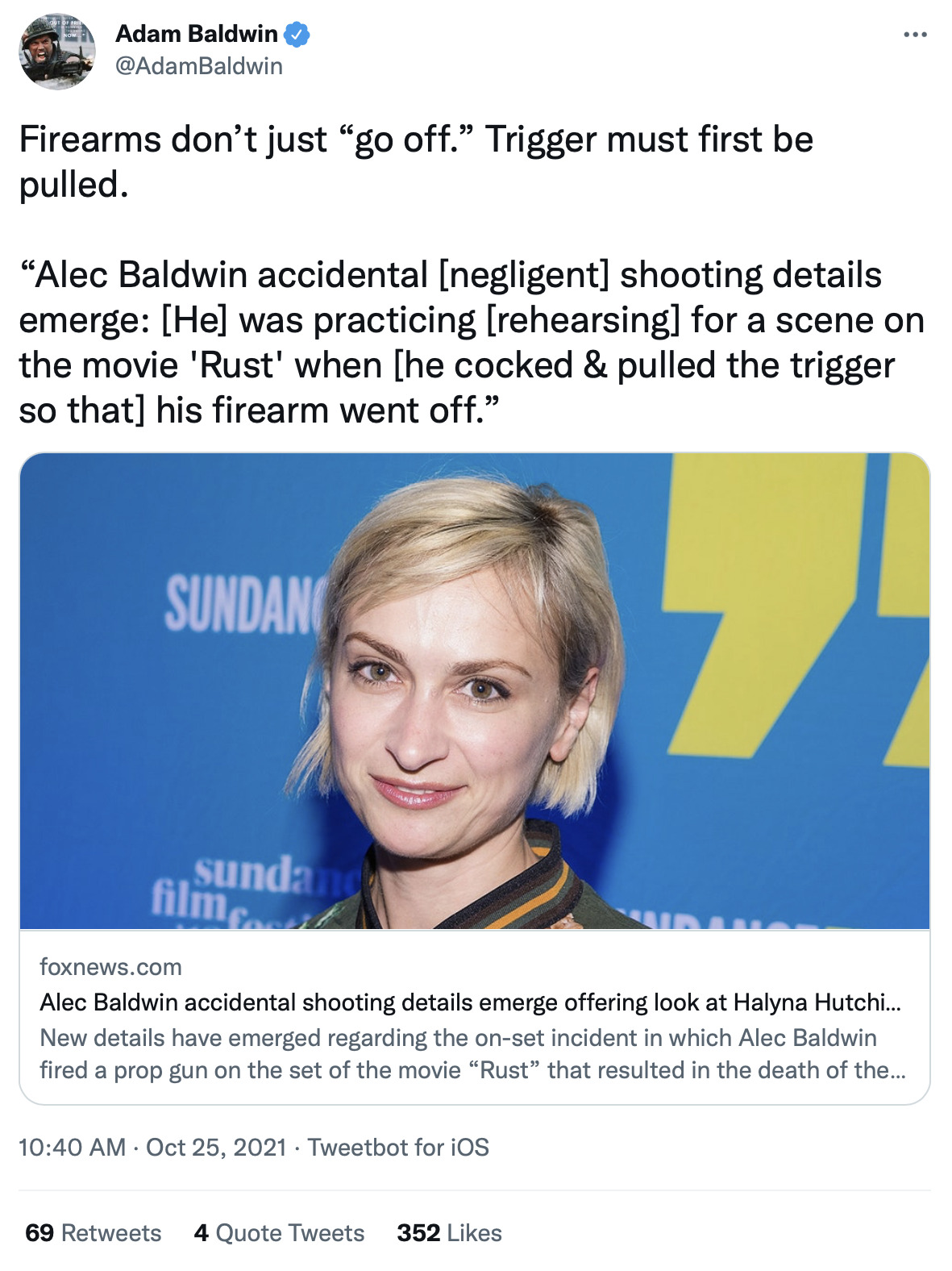 “It Is Not The Gun’s Fault!” Baldwin wrote in response to a tweet by conservative columnist Ed Morrissey, which read, “It is time for Hollywood to stop using real firearms for filming? CBS’ expert says it’s never been safer, but Brandon Lee’s family says enough is enough.” 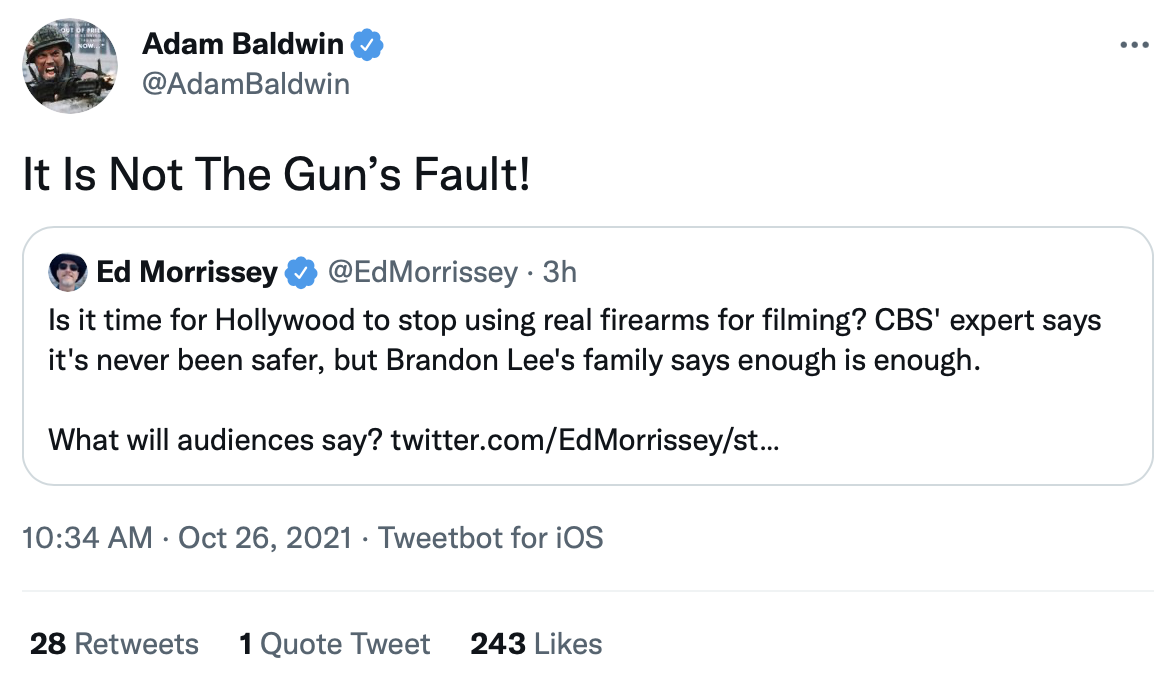 Morrissey alluded to an interview Brandon Lee’s sister Shannon did with CBS Mornings, wherein she shared her opinion on the shooting on the set of Rust, asserting, “It’s just such a maddening thing to have happened, because it’s tragic, and it’s horrible, and yet it didn’t need to happen.”

For those out of the loop, Brandon Lee was shot and killed on the set of The Crow in 1993, when actor Michael Massee, who played the character of “Funboy” in the film, fired a blank at Lee using a .44 Magnum; shooting a dummy bullet from a previous scene instead. 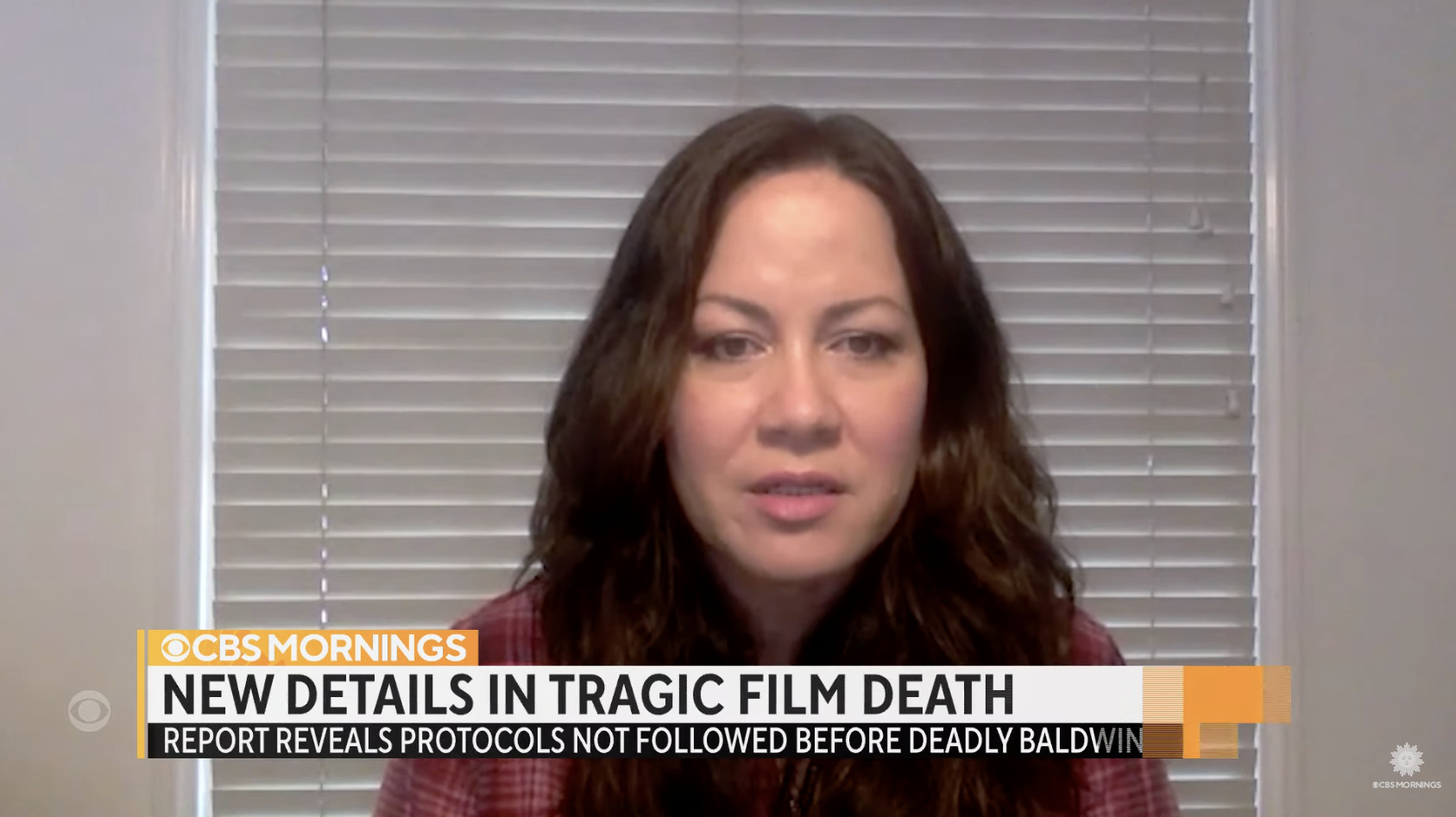 Providing his followers with a proper definition as to what a “cold weapon” really is, Adam Baldwin went on to explain that this particular term refers to “1) An empty gun. 2) A gun with dummy rounds.”

“Dummy rounds are easily eyeballed at the primer,” Baldwin further explained. “They can also be easily extracted and shaken to heat the inert BBs rattling around in the cartridge instead of packed black powder.” 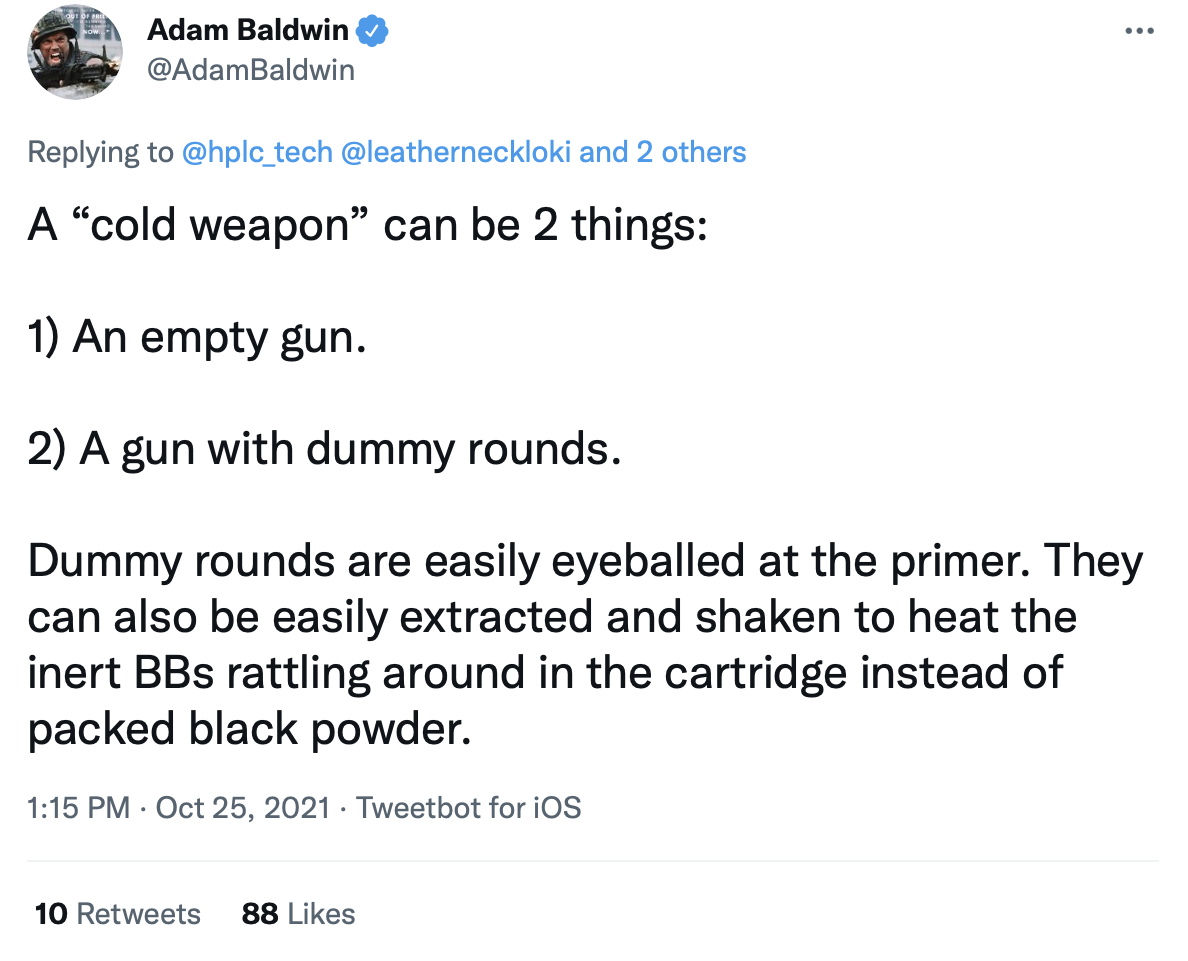 When asked on Twitter whether he had ever been “handed a gun you were assured was cold, which you then checked and found to be hot?” Baldwin said that in over 40 years he’s never been handed a cold gun that he didn’t check himself to make sure this was the case.

“In 40+ years no one’s ever handed me a firearm on set that wasn’t open and easily eyeballed by me personally as to its status, loaded or unloaded,” stated Baldwin.

He added, “Alec has experienced this same himself as a 40yr film veteran and producer,” concluding that Alec Baldwin “was negligent, at best.” 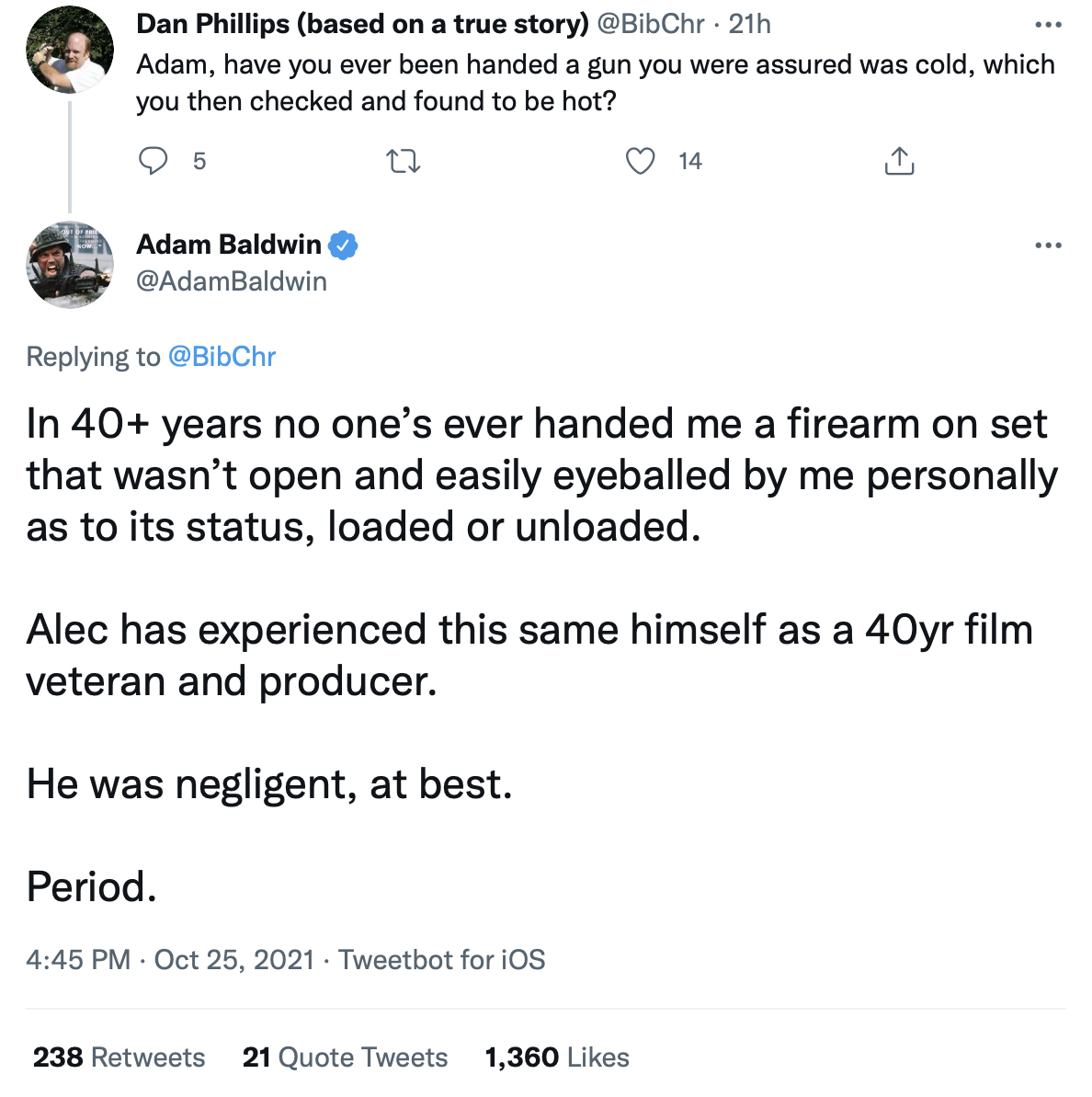 Baldwin also went on to share the official “Screen Actor’s Guild Safety Bulletin For The Motion Picture Industry,” which makes evident that all weapons need to be treated “as though they are loaded and/or ready to use.”

“Do not play with weapons and never point one at anyone, including yourself,” the document reads, later adding that all weapons on set “must undergo thorough safety inspection, testing, and cleaning on a daily basis by qualified personnel.”. 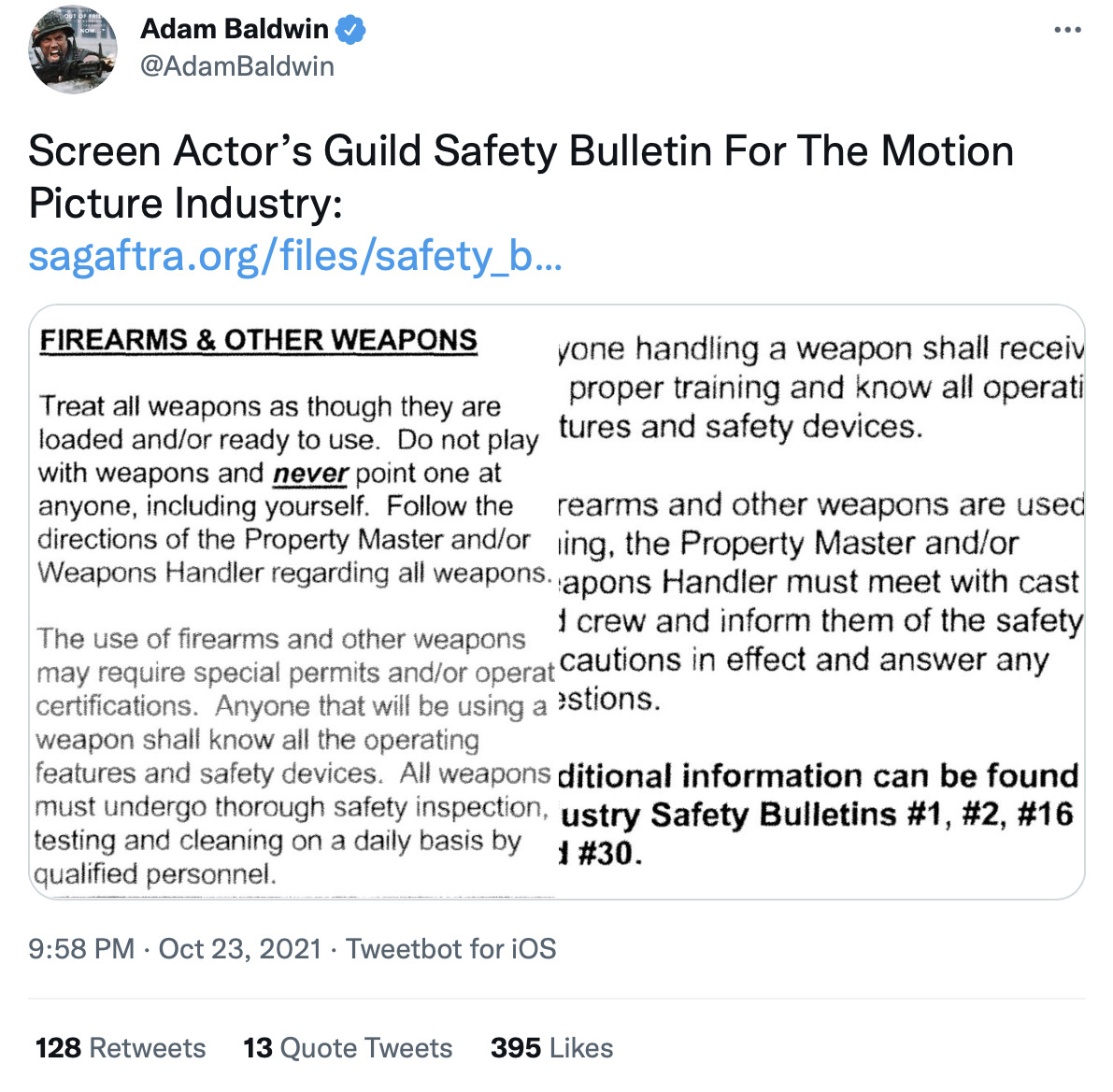 Adam Baldwin also proposes an interesting theory, suggesting that COVID-19 protocols may have played a part in the shooting on the set of Rust.

“Did COVID protocols that segregate crews into A, B & C groups put the armorer in Group B and therefore required to socially distance from close contact with the A team? (e.g., principle actor/producer, director, cinematographer, 1stAD)?” asked Baldwin. 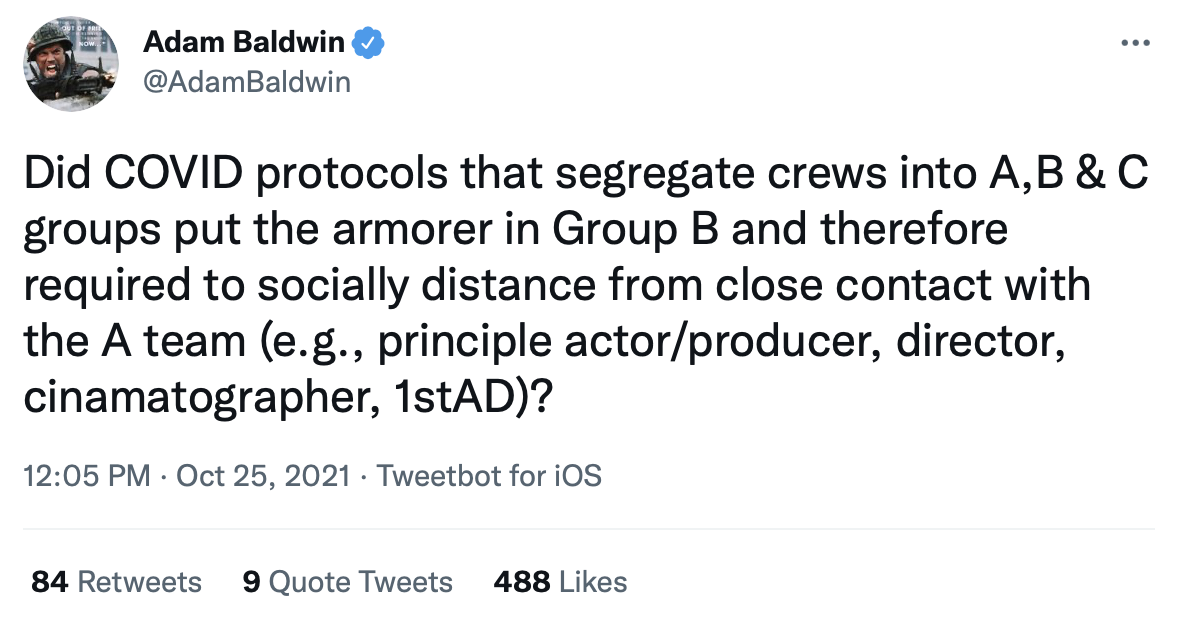 Baldwin was recently on the YouTube channel of conservative radio host, and former NRA spokesperson Dana Loesch, where he discussed his COVID-19 segregation theory on the set of Rust and commented on the whole Alec Baldwin situation, which is most definitely worth a watch.

What do you make of Adam Baldwin’s comments on Alec Baldwin and the shooting on the set of Rust? Let us know your thoughts in the comments section down below or on social media.