The list of unmade Godzilla movies is lengthy and historic enough but we are bereft of one more project – a comic that will, fortunately, be taking another form as an original concept.

But the artist behind it made a few sketches of Godzilla designs inspired by various cinematic eras, along with one of everybody’s favorite flying robot Jet Jaguar, which is out there on Twitter for all to see.

Budding indie comic creator Tristan Jones spread his stunningly detailed work far and wide to take advantage of Godzilla trending globally and it was noticed by the kaiju news channel and content creators of DangerVille.

In his Twitter thread, Jones explained the intended pitch and why Shin Godzilla kept it from going through.

“Godzilla is trending so here’s an opportunistic art tweet of art from a Godzilla comic pitch I was invited to put forward, but ultimately decided not to go through with,” he wrote. 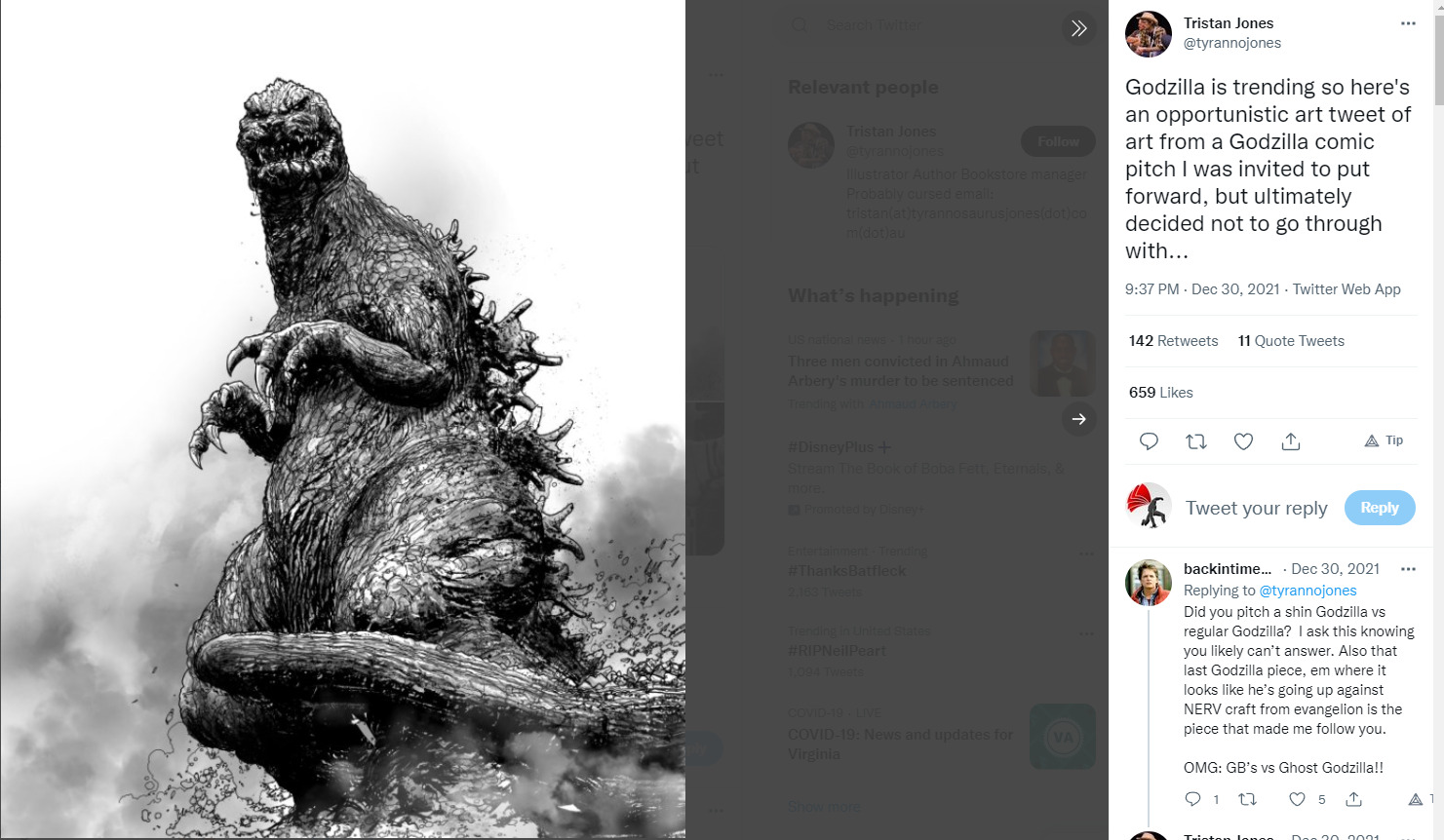 As shown above, he shared two other pieces of his Godzilla artwork as well as one of Jet Jaguar. Here’s another look at his Godzilla design. 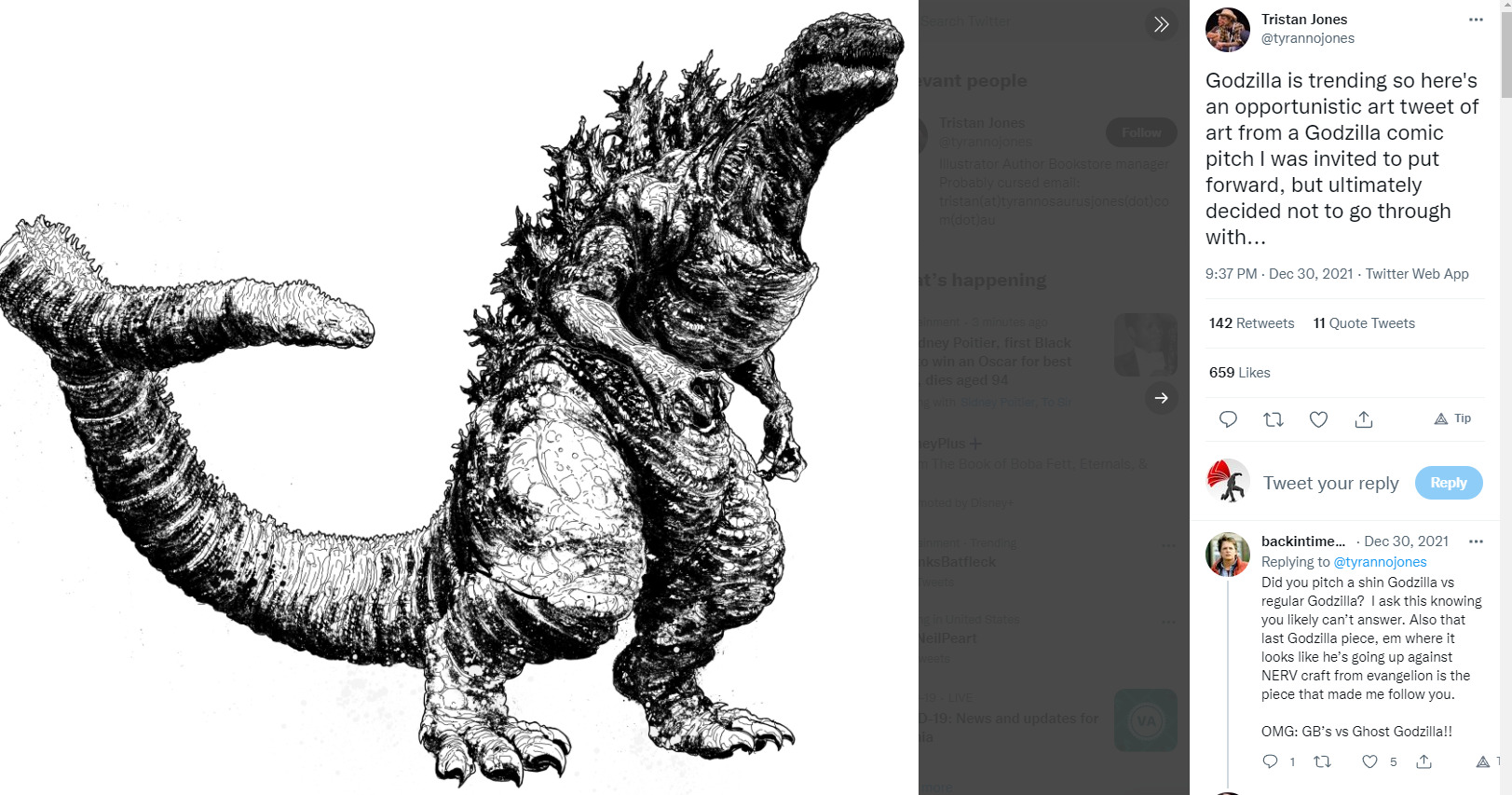 Here’s the third look piece of art he shared of Godzilla. 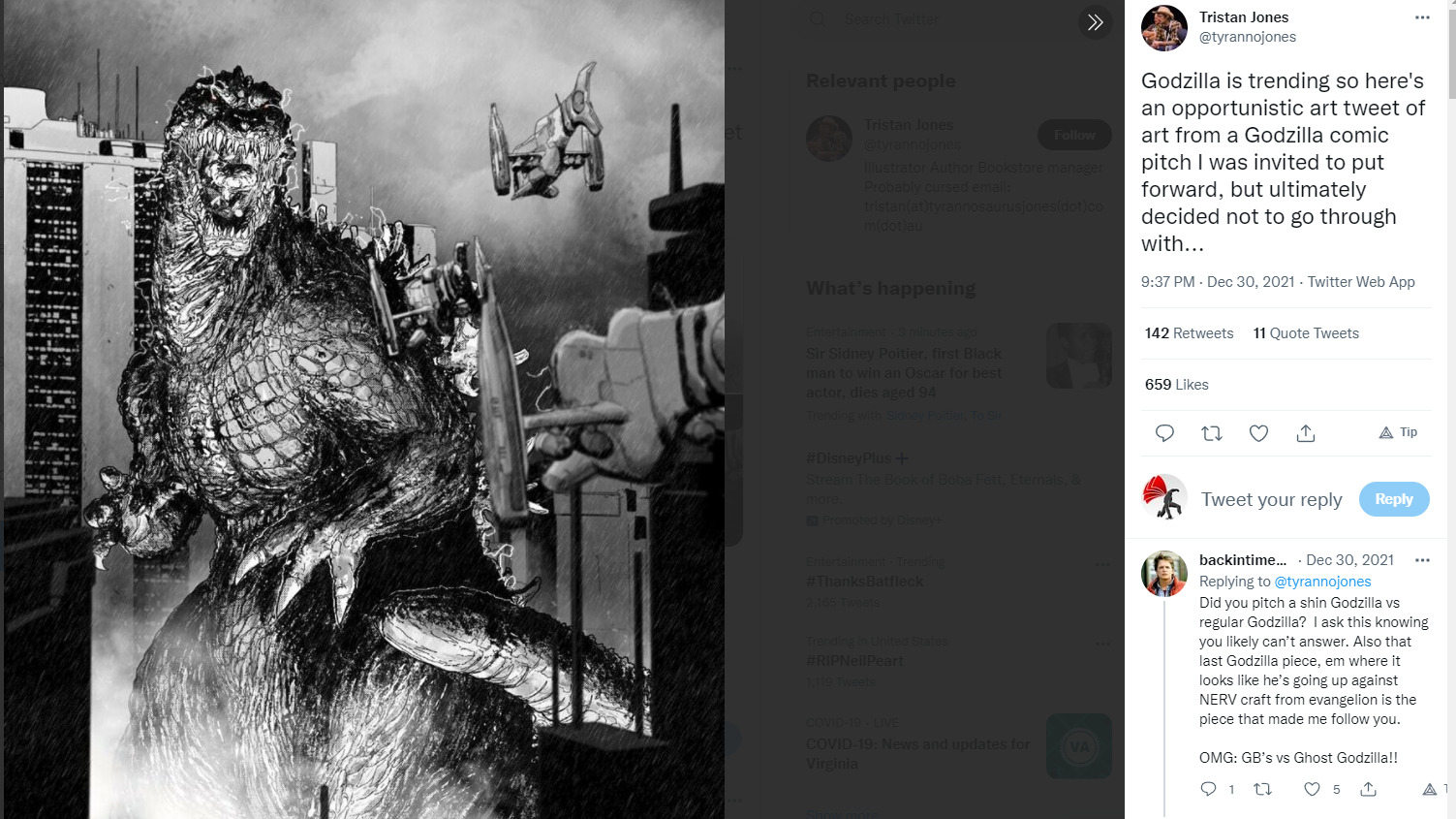 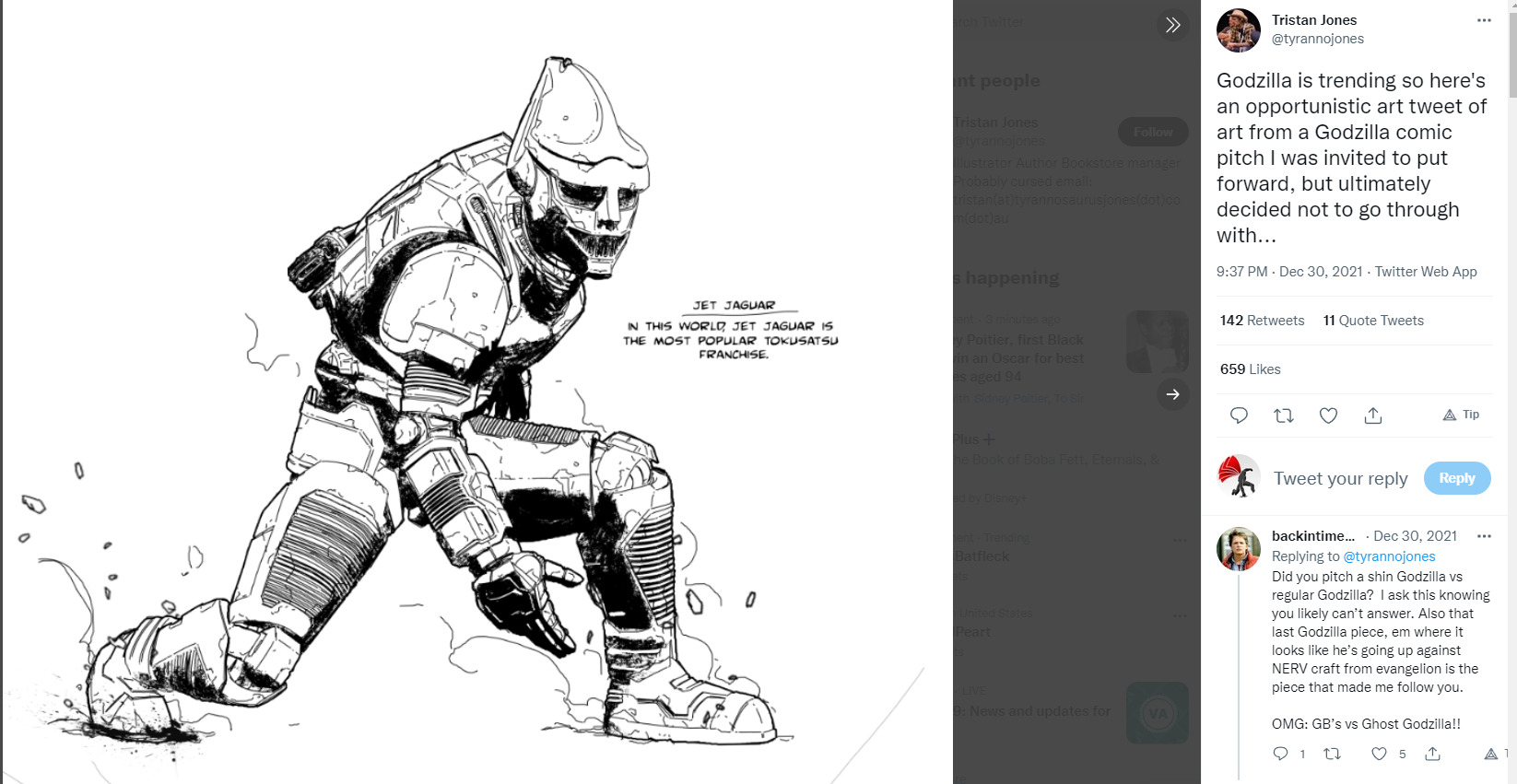 After sharing his artwork, Jones was asked if his idea was Shin vs. another Godzilla from a previous era but that wasn’t the case since he couldn’t use the Reiwa relaunch version at all.

“Neither — it was a blank-slate Godzilla story,” Jones replied. “I wanted to use the Shin design, but that was a no-no. Basically any of the designs were allowed but that. Sucked, but their call. There were other plot points that weren’t going to go through, so I just decided to go creator owned.” 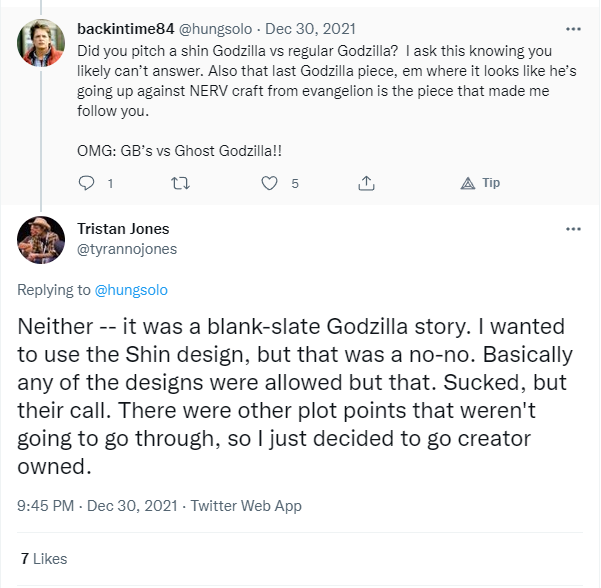 He didn’t mention Toho though it stands to reason the call was theirs which Jones isn’t sweating too badly. While he didn’t get too specific, he revealed his plans to make the characters his own.

“Well, for me, all the best Godzilla stories in my mind are about the world responding to Godzilla, I can still tell the stories of the characters I created, but I just change Godzilla into something that’s visually my own ‘tribute’ to the beast,” he said. 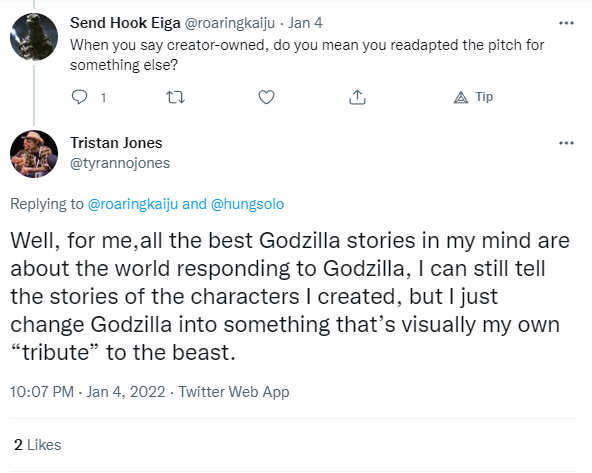 Jones also plans to keep a tribute to Jet Jaguar in his creator-owned adaptation when that comes to fruition. His design in the above collection is one of his favorites.

“Thanks so much! Yeah, I was pretty happy with it!” he said. “I know exactly how I’m going to change it without necessarily losing the wink to those who know JJ when I make it my own, so there’s that at least!” 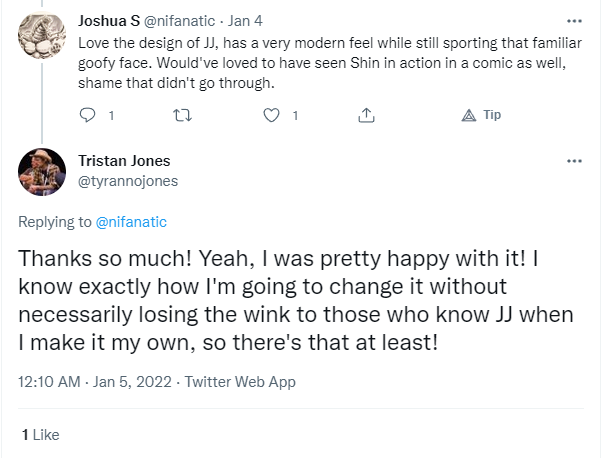 Tristan Jones is an independent illustrator and author in Australia who does art and prints of popular IPs such as Alien and Predator. His personal site is still under construction so it might be a while before there are further updates on his kaiju project.

What do you think of Jones’s drawings? Tell us below and please be clear if you like Jet Jaguar and Shin Godzilla to the ends of the Earth.