SEGA has “indefinitely” pulled an episode of the Vocaloid gag anime Petit Sekai after its punchline was accused of promoting “blackface” by Western audiences . 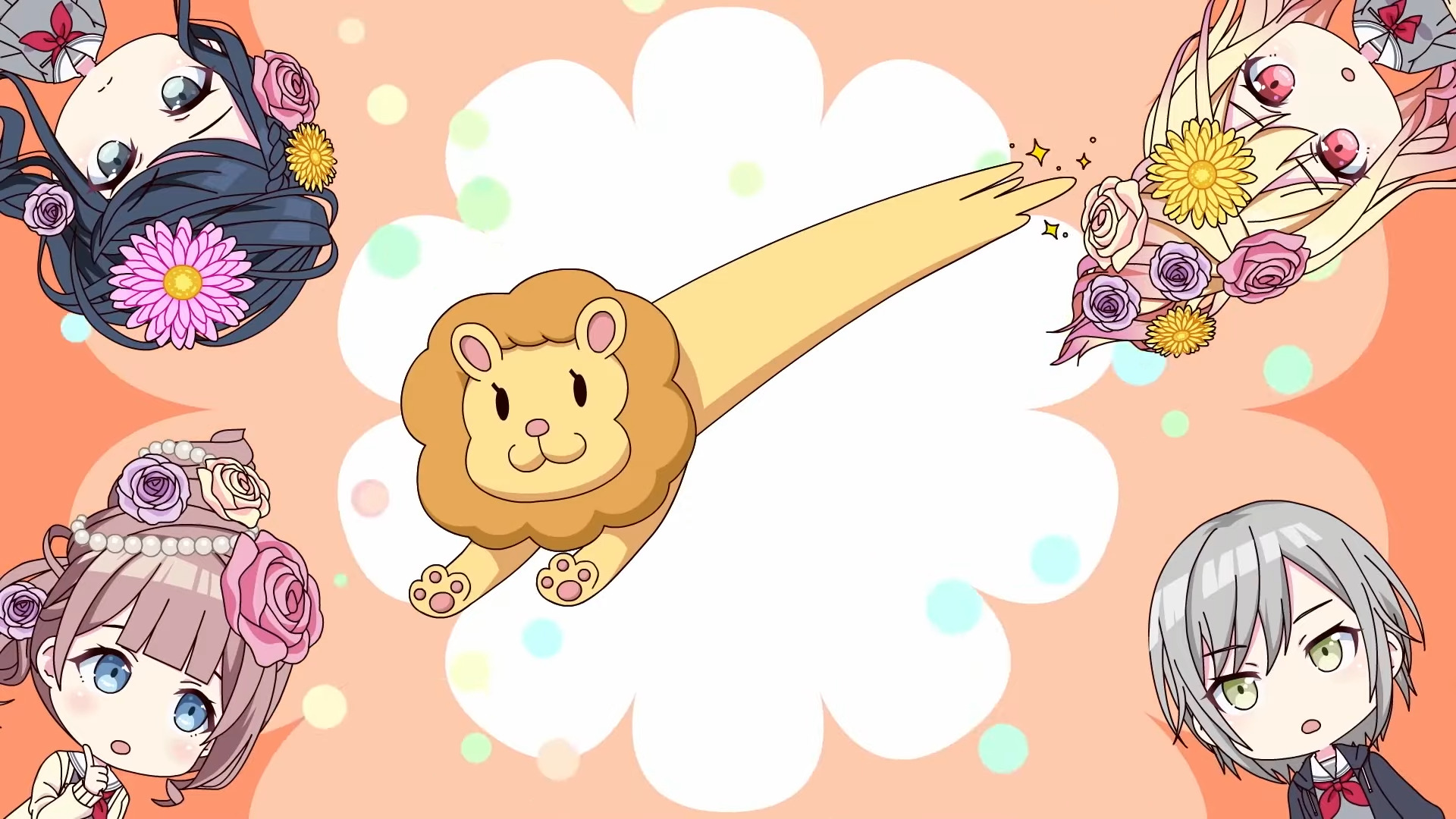 Based on the Project SEKAI COLORFUL STAGE! mobile rhythm game of the same name, Petit Sekai follows ‘chibi’ versions of Hatsune Miku and her fellow Vocaloids (the term given for such digital performers, taken from the name of the speech synthesis software that provides their voices) as they find themselves in a number of ever comedic situations each episode.

Such plots include the series’ characters providing instruction on “1000 Ways to Get Rid of Nervousness”, pushing themselves to the limit in pursuit of their idol dreams, and even taking on the role of tokusatsu heroes to protect the world. 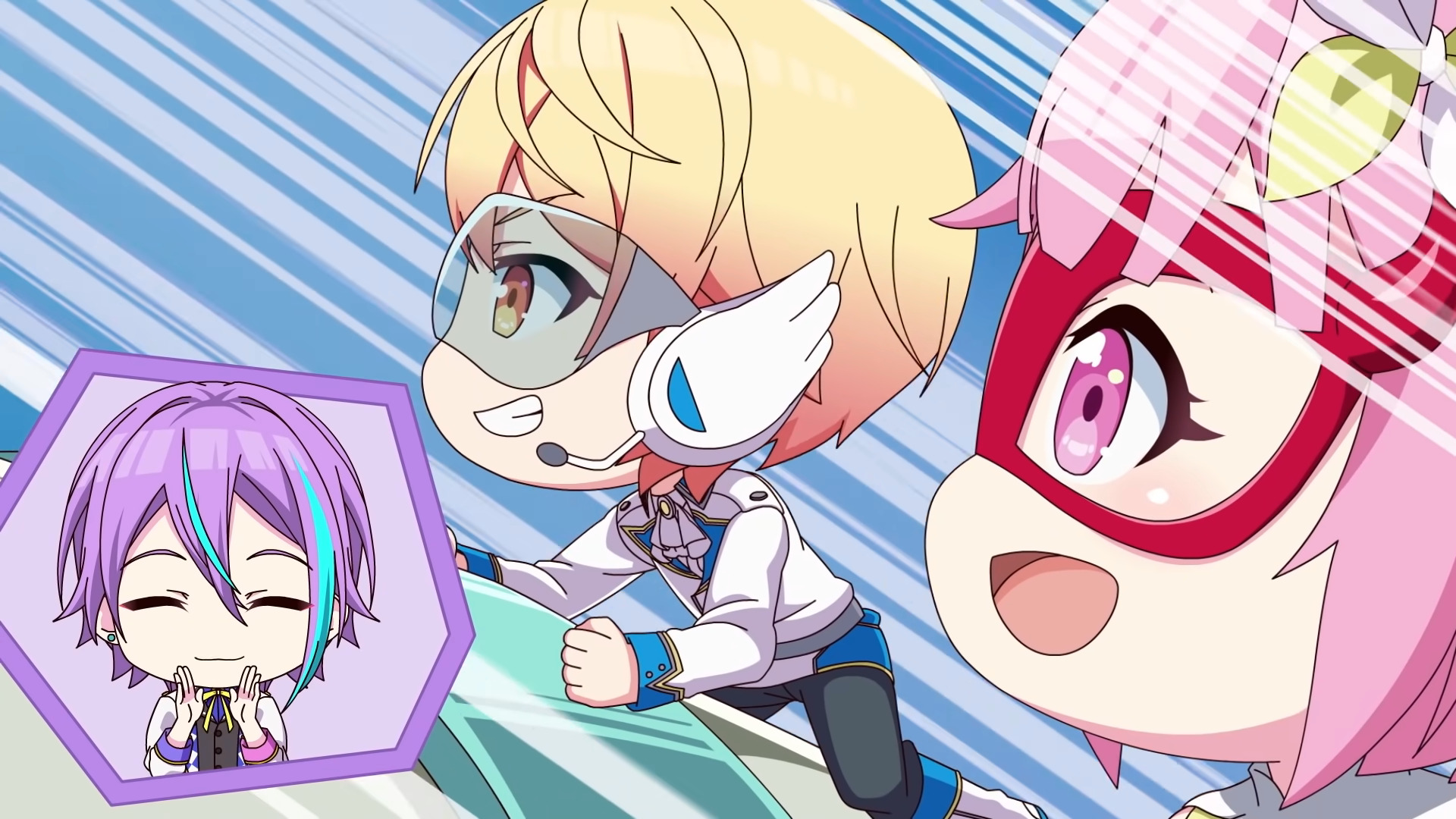 However, despite the innocent and light-hearted nature of these shorts, the latest entry in the series has sparked outrage among Western audiences.

Released on February 17th and titled Leo/need style, the latest episode of Petit Sekai opens with Saki, a member of the all-girl idol group Leo/need, introducing a new look that bears a striking resemblance to Marin Kitagawa, the lead character of the currently-airing My Dress-Up Darling. 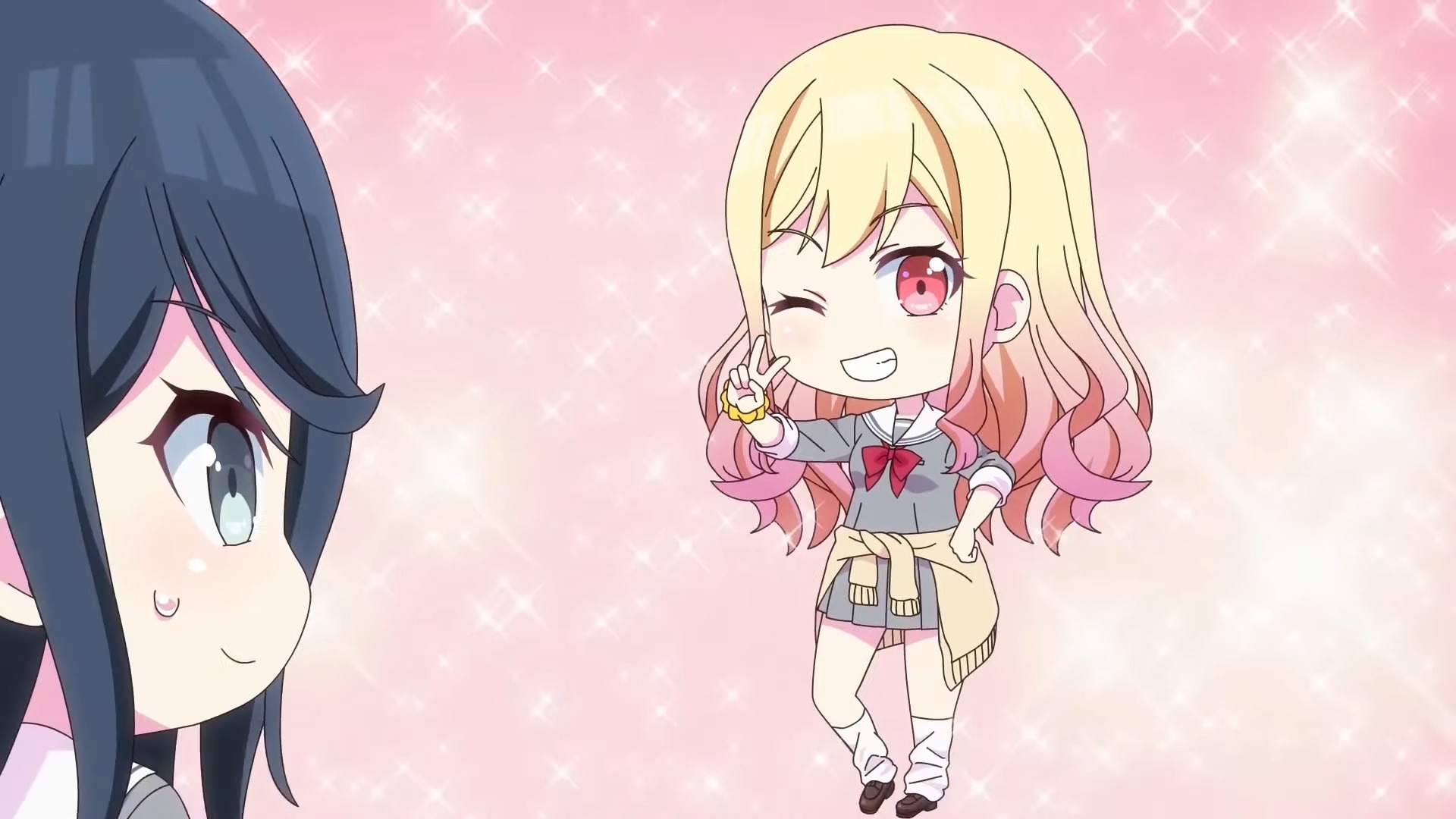 Eventually, as Saki is joined in her new appearance by her fellow Leo/need members Icchan and Honami, the newly fashioned trio is discovered by the group’s final member, Shiho.

Taking notice of their makeovers, Shiho proceeds to inform her bandmates that she would rather “perfect my technique before my visuals”, to which Icchan reasons that both visuals and music are key ingredients to an idol group’s success. 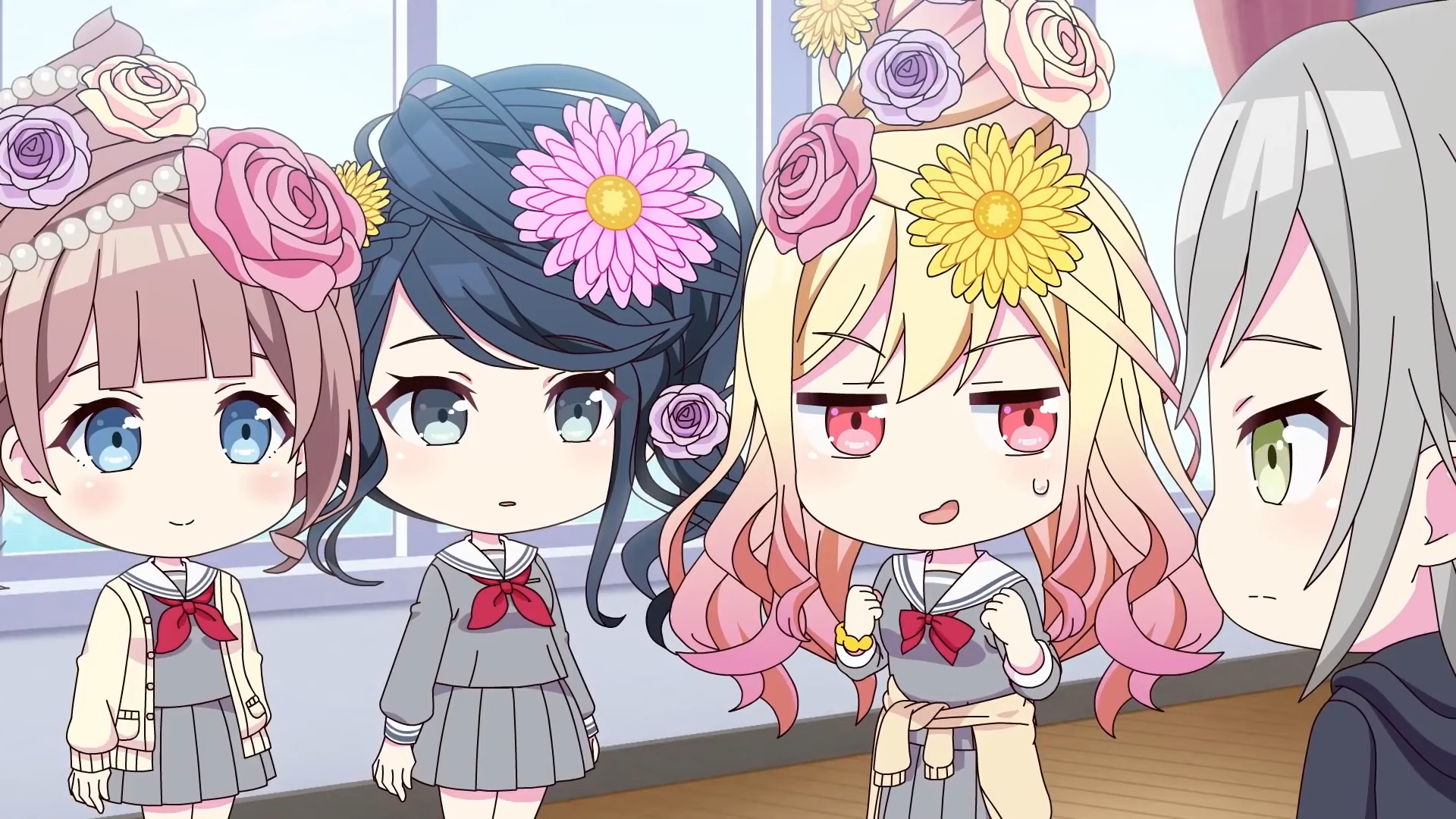 As such, the group proceeds to brainstorm on ideas for their visual ‘theme’.

Taking the lead from the ‘Leo’ in their band name, the group eventually proposes a ‘Lion’ theme, replete with tribal costumes and dark make-up done in the gyaru-style – a popular Japanese fashion subculture, the ‘gyaru’ style typically sees women dressing in loud, exaggerated clothing and wearing dramatic make-up as a rejection of the country’s traditional beauty standards. 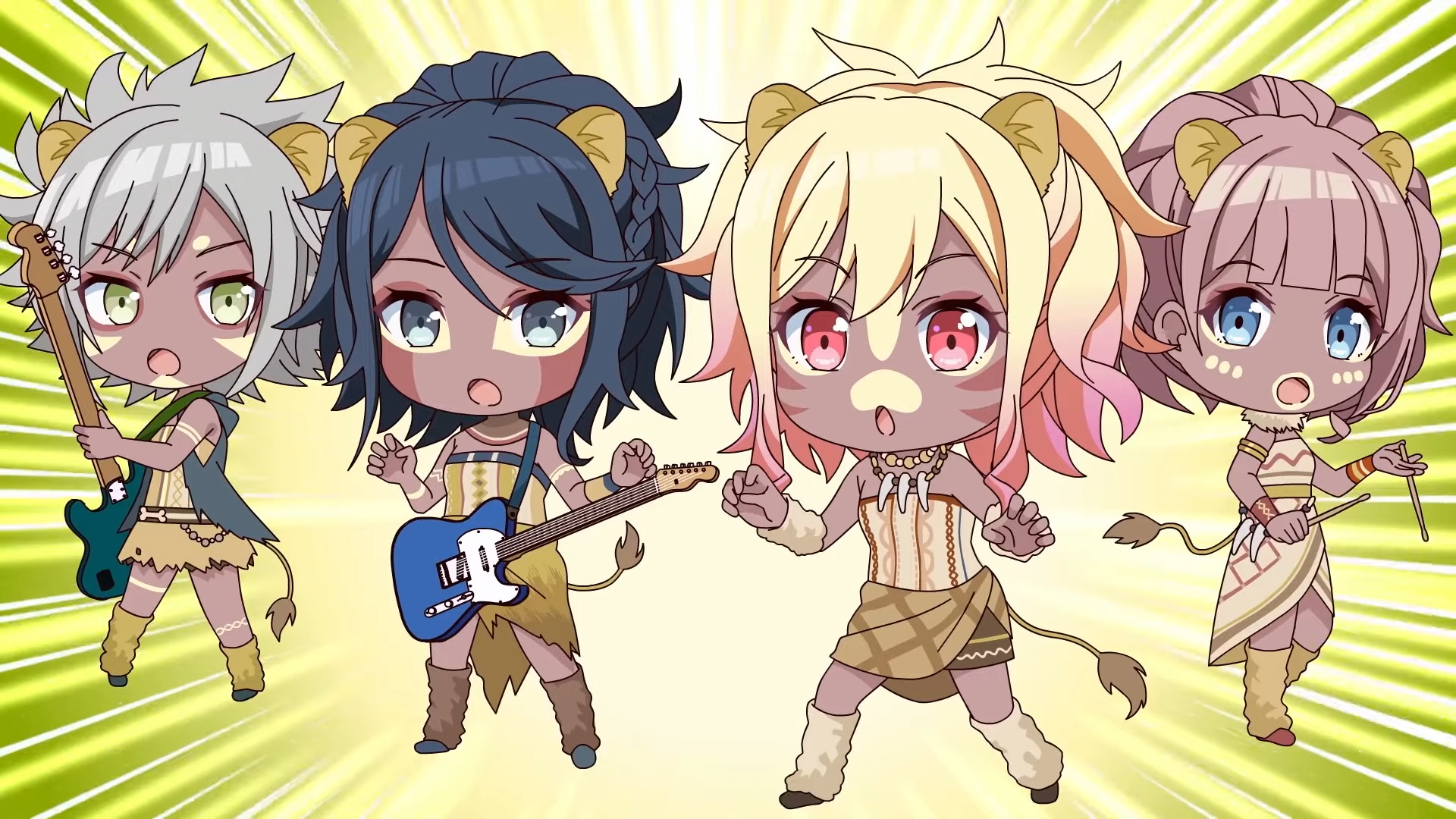 However, Shiho eventually rejects the theme, finding that it’s “so far out there”.

Dejected, a still-fully-made-up Saki then proceeds to walk home, ending the episode by surprising her brother with her wildly different appearance. 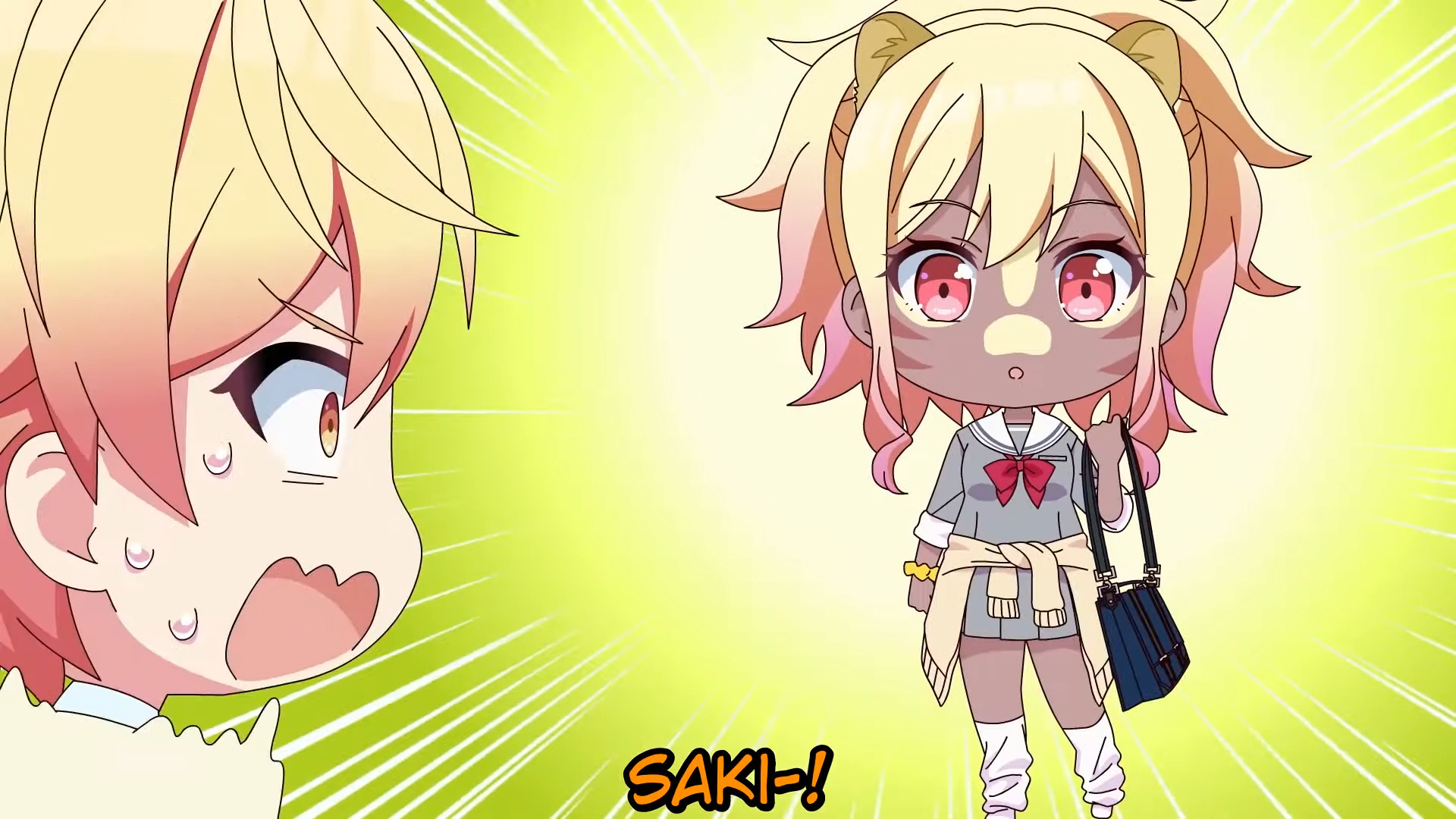 Following the episode’s premiere, social media was soon inundated with outrage towards SEGA, as a number of Western fans took issue with the anime’s depiction of what they described as “blackface”.

One fan, @kzzrttt asserted, “the project sekai blackface situation is crazy because all the devs know well and have acknowledged that there’s a gigantic western following for the game so the fact that they would put leo need in blackface is so”

“There is literally NO excuse for the Project Sekai anime to have blackface in it, said @kaiyerra. “I hope they get a ton of s–t for this. I’m not sorry. This is just gross”.

In a follow-up tweet, she further stated, “I am again doubling down on this being in poor taste. There’s no excuse for the blackface. They should have done carnival face paint or cat whiskers. They shouldn’t have worn stereotypical ‘tribal’ or caveman outfits either.”

“I have also seen people say ‘this is more like gyaru fashion!! Haha westerners don’t know s–t’,” she added. “This is not gyaru fashion, nor does it resemble it. Gyarus don’t dress like stereotypical African tribal people”.

Retweeting the announcement of a new Leo/need event in Project SEKAI, @nidavellirsprig told SEGA, “instead of releasing a new leo/need event why dont you address the fact you seriously thought it was ok to do a sekai ep w leo/need doing blackface.” 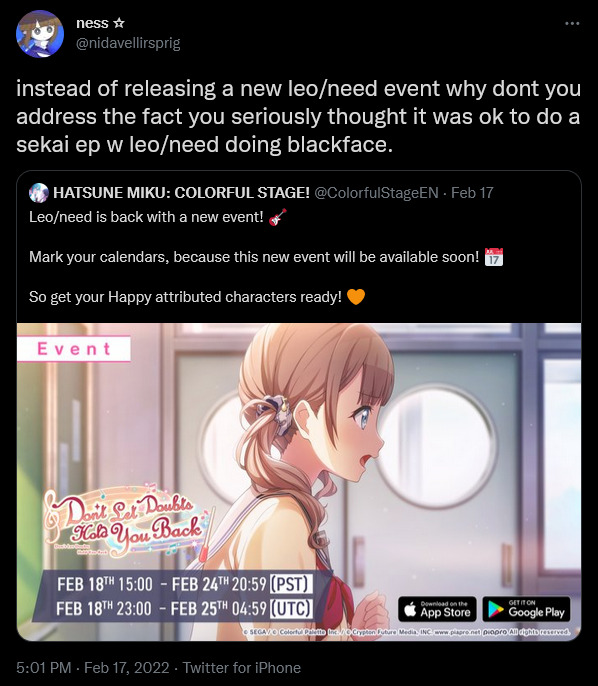 Ultimately, in the face of these accusations, SEGA issued a statement on February 18th to both their English and Japanese accounts to “sincerely [apologize] regarding the use of an inappropriate image in the episode ‘Leo/need Style.’”

“The ‘Project SEKAI COLORFUL STAGE! Feat. Hatsune Miku’ and ‘HATSUNE MIKU: COLORFUL STAGE!’ teams’ goal is to provide both in-game and outside-the-game content that is enjoyable by fans around the world with different cultures and values,” they continued. “We would like to issue a most sincere apology for releasing inappropriate and insensitive content, although it was unintentional, we appreciate many of our fans for pointing the issue out.” 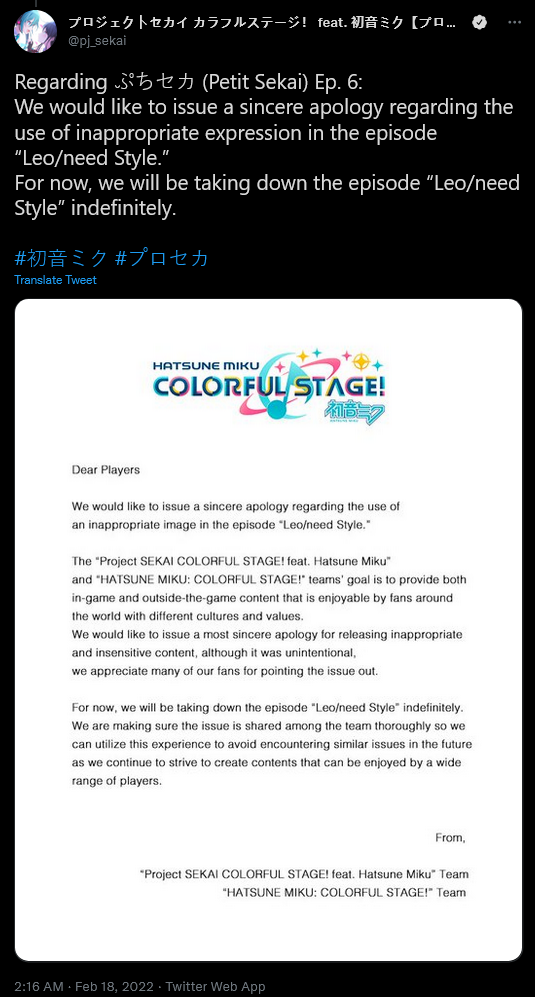 To that end, SEGA then announced “For now, we will be taking down the episode ‘Leo/need Style’ indefinitely.

“We are making sure the issue is shared among the team thoroughly so we can utilize this experience to avoid encountering similar issues in the future as we continue to strive to create contents that can be enjoyed by a wide range of players,” they concluded. 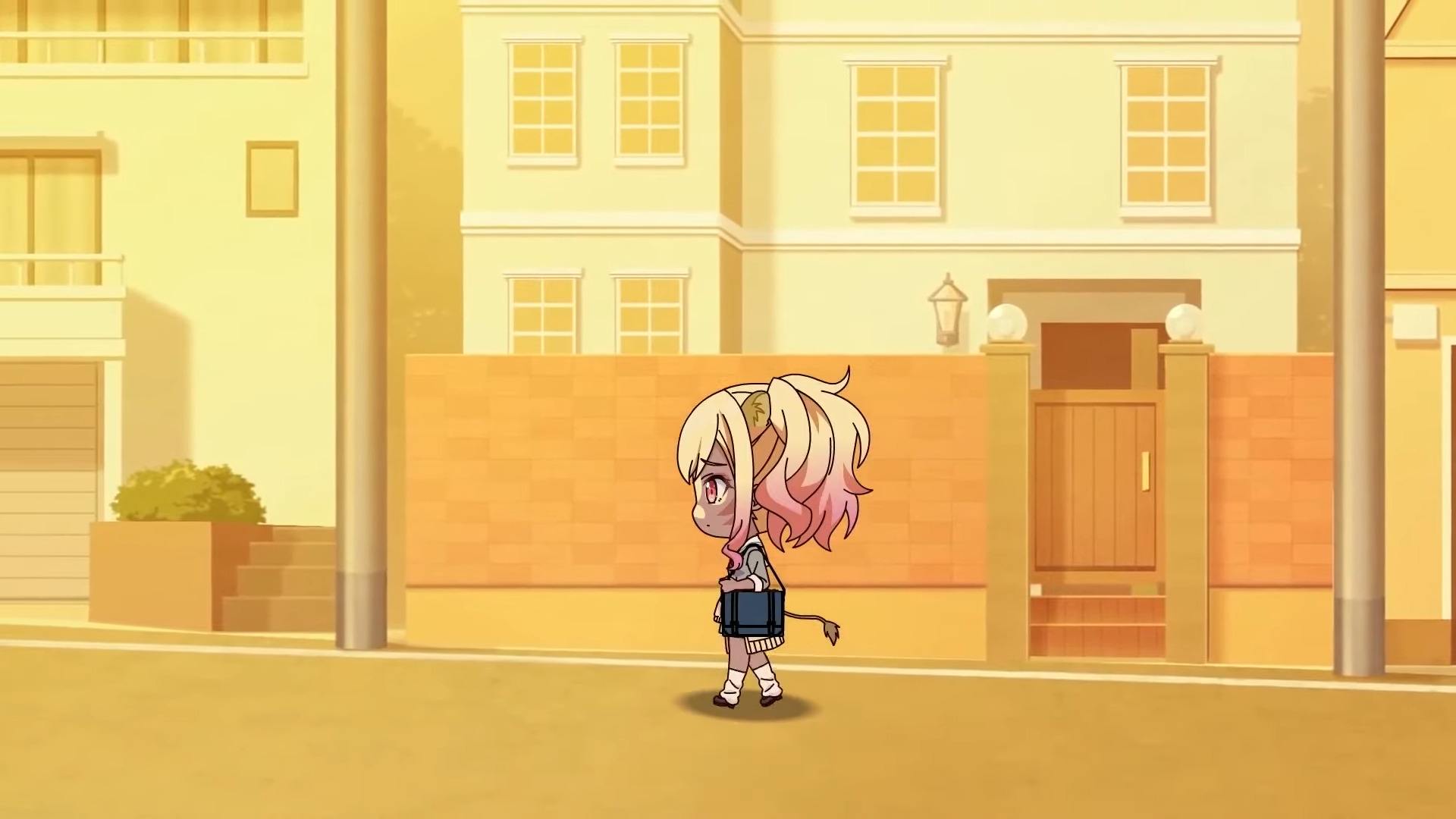 What do you make of SEGA’s decision to pull the Leo/need Style episode of Petit Sekai? Let us know your thoughts on social media or in the comments down below!