Tribute Games teamed up with Dotemu, the publisher responsible for bringing the ultra-popular Streets Of Rage 4 to gamers in 2020, for a brand new side-scrolling Teenage Mutant Ninja Turtles beat-em-up bonanza. Shredder’s Revenge has finally been released after what felt like an eternity in production, but does it kick as much shell as Tribute originally promised?

First, it’s worth noting that Shredder’s Revenge is tailored to a laser-focused fan demographic that grew up watching the original 1980s TMNT cartoon, and the video games that followed. This installment takes most of its design and gameplay cues from TMNT: Turtles In Time, as opposed to its iconic coin-op predecessor.

That’s not a bad thing, actually. While Turtles In Time failed to capture the same resonance as the preceding arcade title, it did introduce a lot of gameplay mechanics that allowed for more fluid and engaging combat, as opposed to a simple hack and slash formula. Shredder’s Revenge takes everything introduced in that game, and builds upon it in a big way. 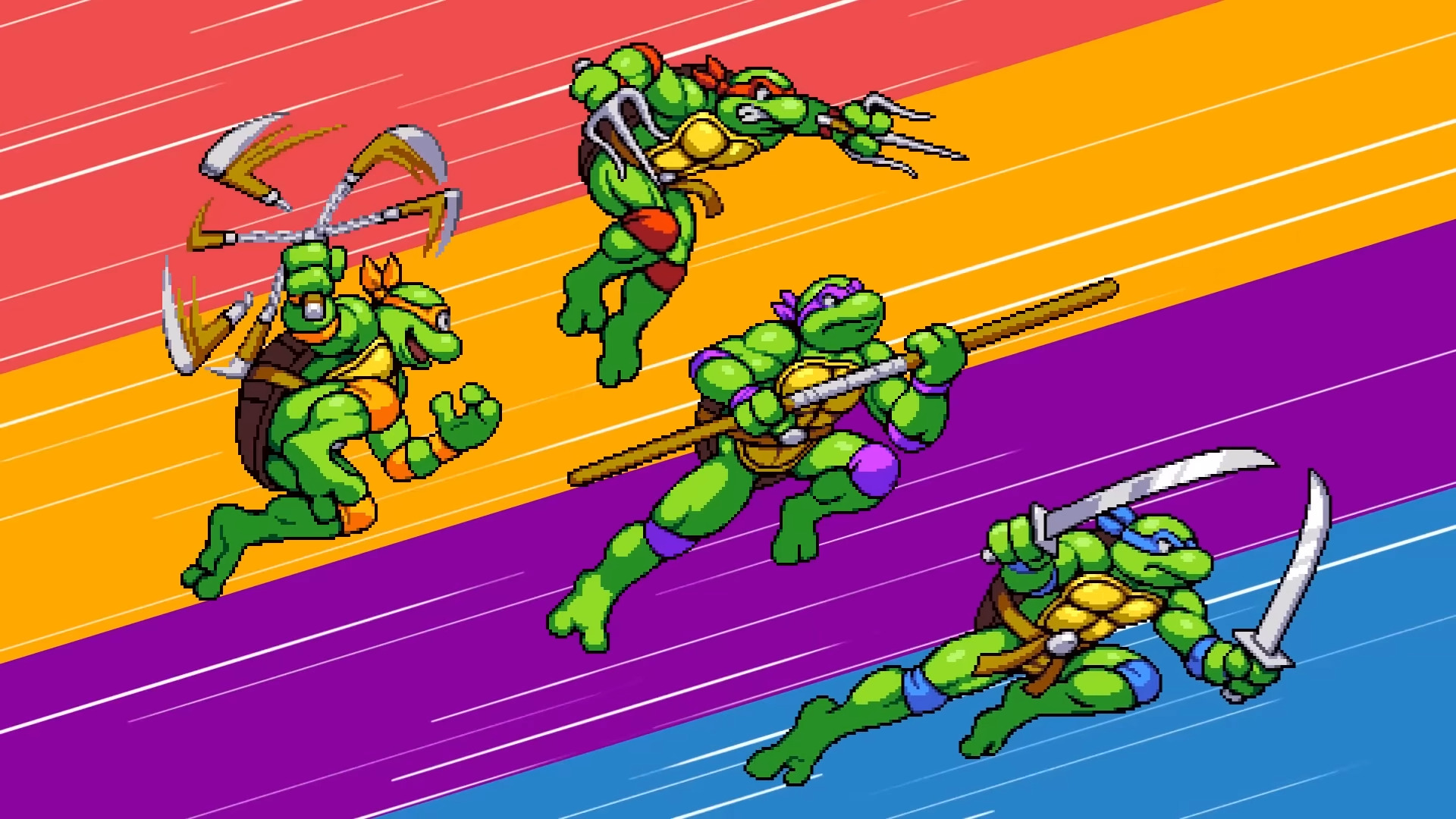 When the Statue of Liberty is taken over by the evil Foot Clan, the heroes in green take to the mean city streets, rooftops, sewers, and a variety of other interesting locations to do battle with them once again. Their goal is to catch up with Bebop and Rocksteady, who are collecting pieces of Krang’s android body for purposes yet unknown.

Of course, Shredder sits at the heart of the operation, pulling the strings to achieve his master plan. The game progresses as expected – players will slug it out with bad guys through a variety of stages before making it to an end boss(s), each of whom has a specific attack pattern that needs to be exploited to gain victory. 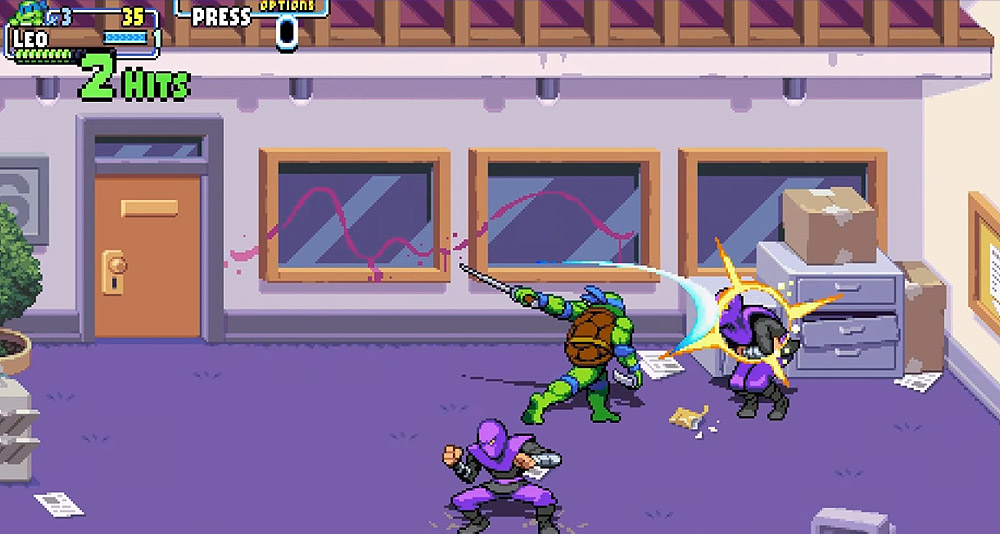 A lot of fan favorites from the cartoon and ancillary material make their way into the game as well, from the infamous Mousers and wheelie robots, to big bads like Leatherhead and the Rat King, to name a few. Even Tokka and Rahzar make a guest appearance during a fight in a shopping mall.

Backing up the Turtles are April O’Neil and Master Splinter, with a few more surprises thrown into the mix. In short, it’s a 1980s TMNT lover’s dream come true, with all the characters and franchise references one could possibly think of… and then some. 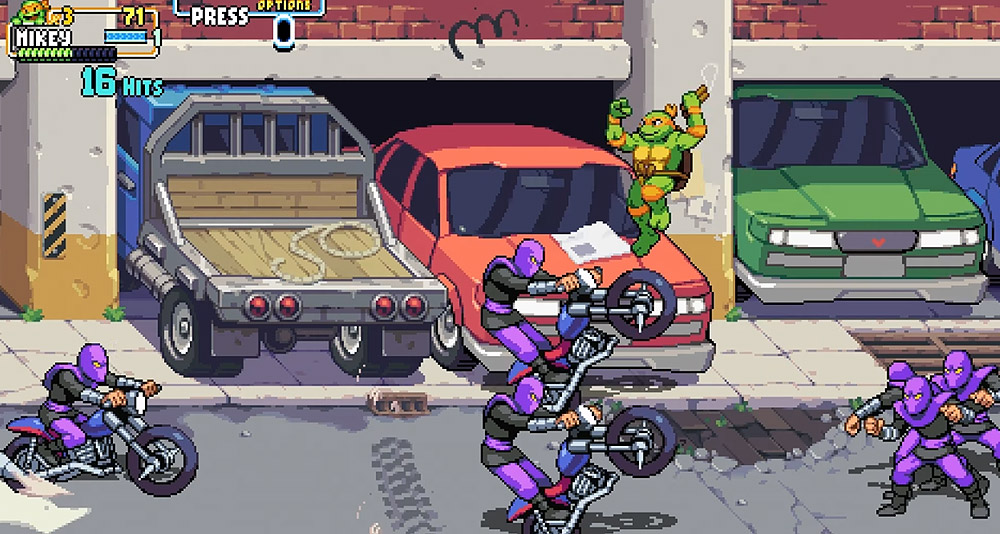 Shredder’s Revenge faced the risk of copycatting just about every other arcade brawler imaginable, but Tribute tried its best to flesh out the gameplay mechanics. Proof can be seen in the pre-game tutorial slides which demonstrate just how many attacks, counter-attacks and evade maneuvers players can utilize to stay alive. 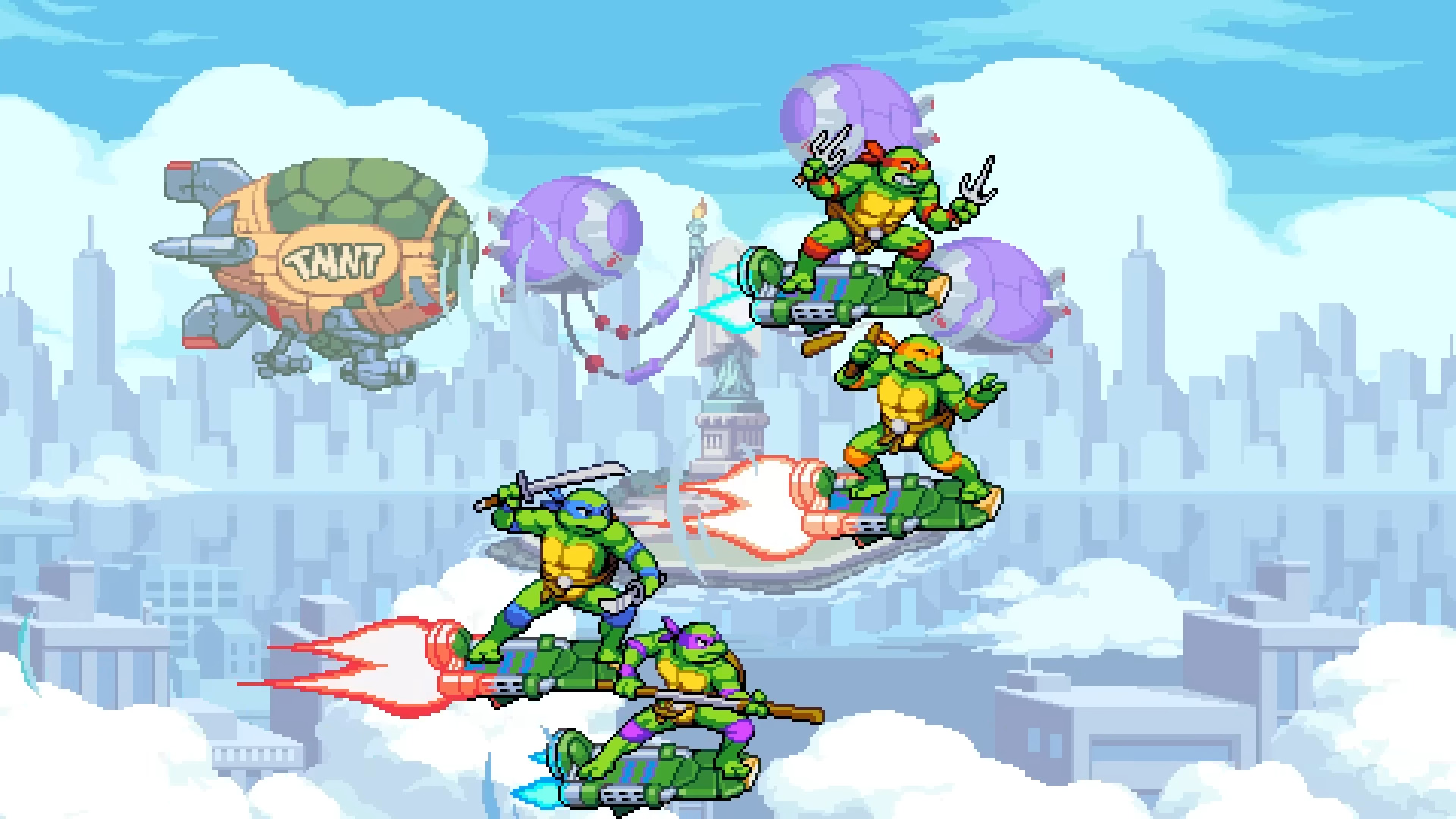 In fact, most gamers will be sliced into turtle soup in record time if they don’t adapt their fighting style, especially with the difficulty cranked up to Gnarly. Enemies have quick reflexes in this game, and they won’t pull any punches, which means players need to figure out their patterns, attack intelligently, and dodge out of the way to avoid getting slugged.

This adds to the replay value of the game, which is good, considering that these types of action brawlers tend to get stale in relatively short order. The more players fight, the more fluid they became, taking advantage of both ground and aerial evasions and counter-strikes, not to mention special attacks to pull them out of a bind. 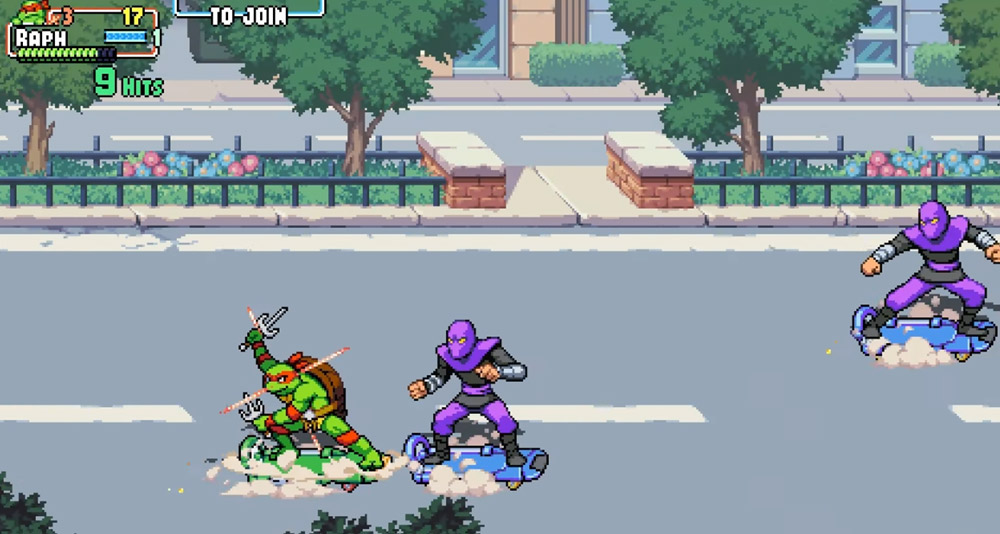 The game relies heavily on combos to build up a power meter, which can unleash those special attacks. This is handy when too many enemies are on screen overwhelming the player. Throughout the course of the adventure, new special attacks can be unlocked in order to vary things up, and keep the formula feeling fresh.

The environments also play a critical role, with many interactive items that can be smashed to reveal power-ups and collectibles, or used to take down enemies, much like the classic TMNT arcade games of the 1990s. Once again, Tribute takes all these past mechanics into account, and expands on them to make the game feel more interactive, and the combat more flexible. 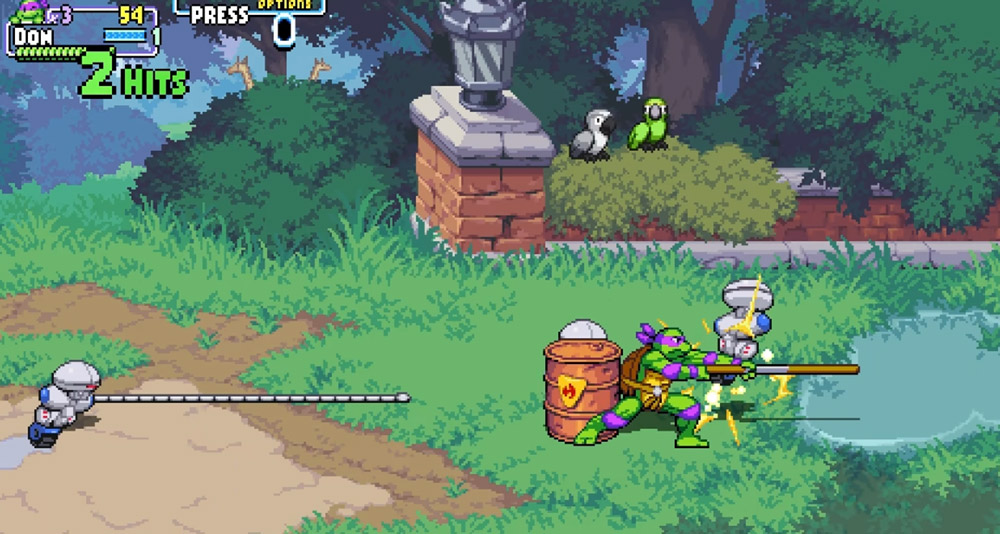 There’s also collectibles to be found in the form of newspaper articles, diary entries and VHS tapes, to name a few. Different characters will ask players to locate these items throughout each stage, usually hidden inside a breakable container of some sort. Once all the items have been found, the characters will reward players with extra points.

Shredder’s Revenge is slightly non-linear in terms of stage progression, as well. Instead of simply moving from one stage to the next, players can putt around a top-down map reminiscent of the classic single-player TMNT game released on the Nintendo Entertainment System in 1989. 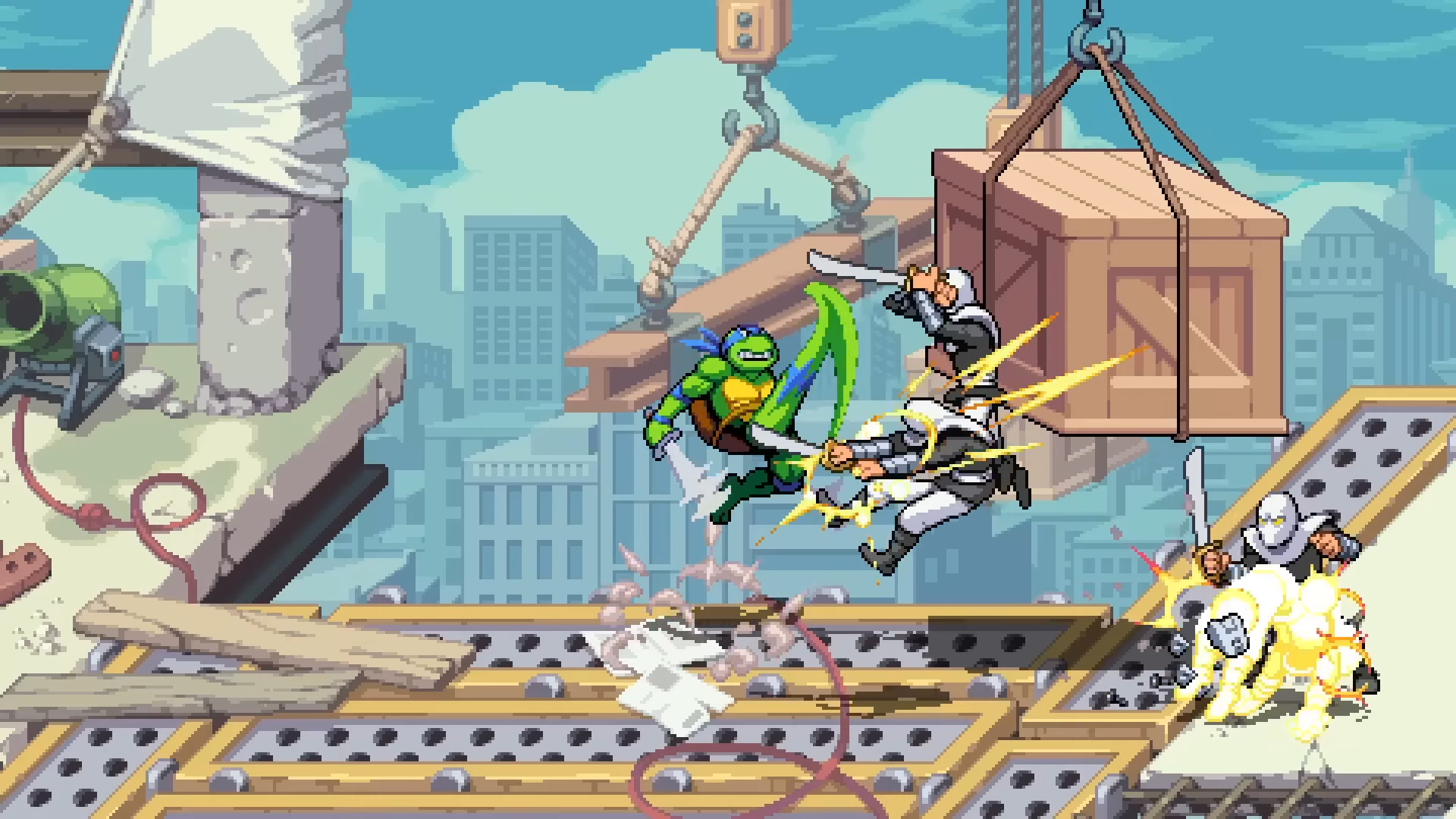 Was this done on purpose for nostalgia’s sake? Possibly, but there’s more to it than that.

Players can replay stages in order to find all the hidden collectibles, or gain some practice. It’s another way of making the game feel less constricted to classic side-scrolling beat-em-up formulae, and any little bit helps. 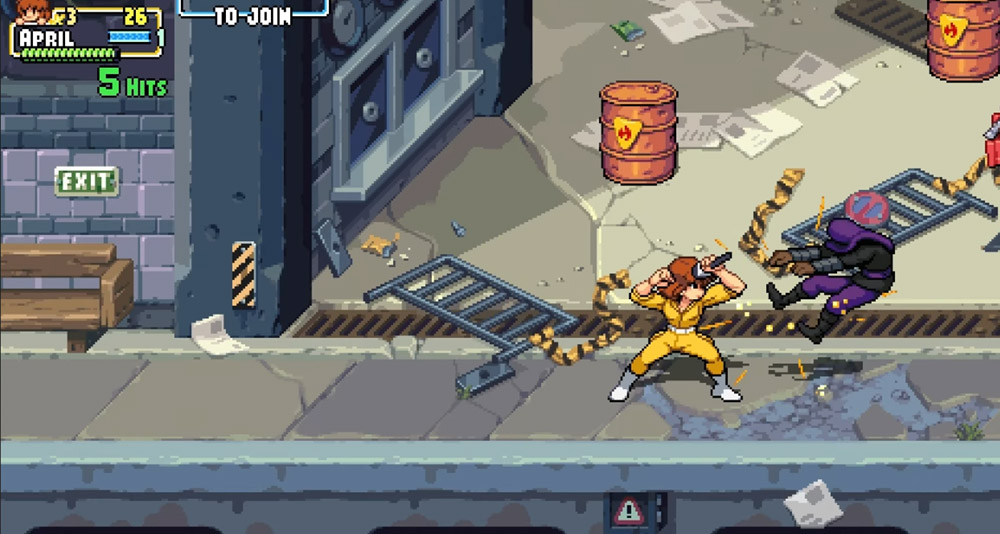 Younger gamers may not get what Shredder’s Revenge is all about, but older gamers cruising around 40 years old will absolutely understand it. This is a game made for them, and it shows. The game predates the ruin brought upon the TMNT franchise, courtesy of several really bad animated TV shows and the unholy Michael Bay live-action films. 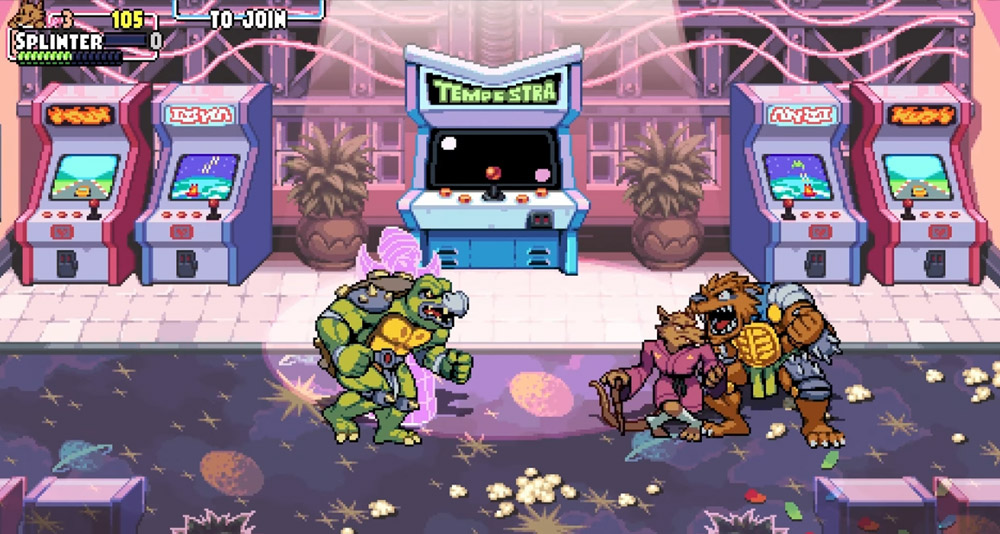 Instead, it tackles everything from the 1980s/90s time period when Teenage Mutant Ninja Turtles was one of the hottest media franchises on the planet. The cartoon series, the comics, and the original New Line live-action flicks all get a shout out here, while building on the classic arcade games of yore.

Even side characters get their moment in the spotlight, including Irma Langinstein, the Punk Frogs, The Neutrinos, Vernon Fenwick, and even Burne Thompson. The creators of Shredder’s Revenge clearly knew the lore from to bottom, and their passion for the franchise can be seen in every single pixel of the game. 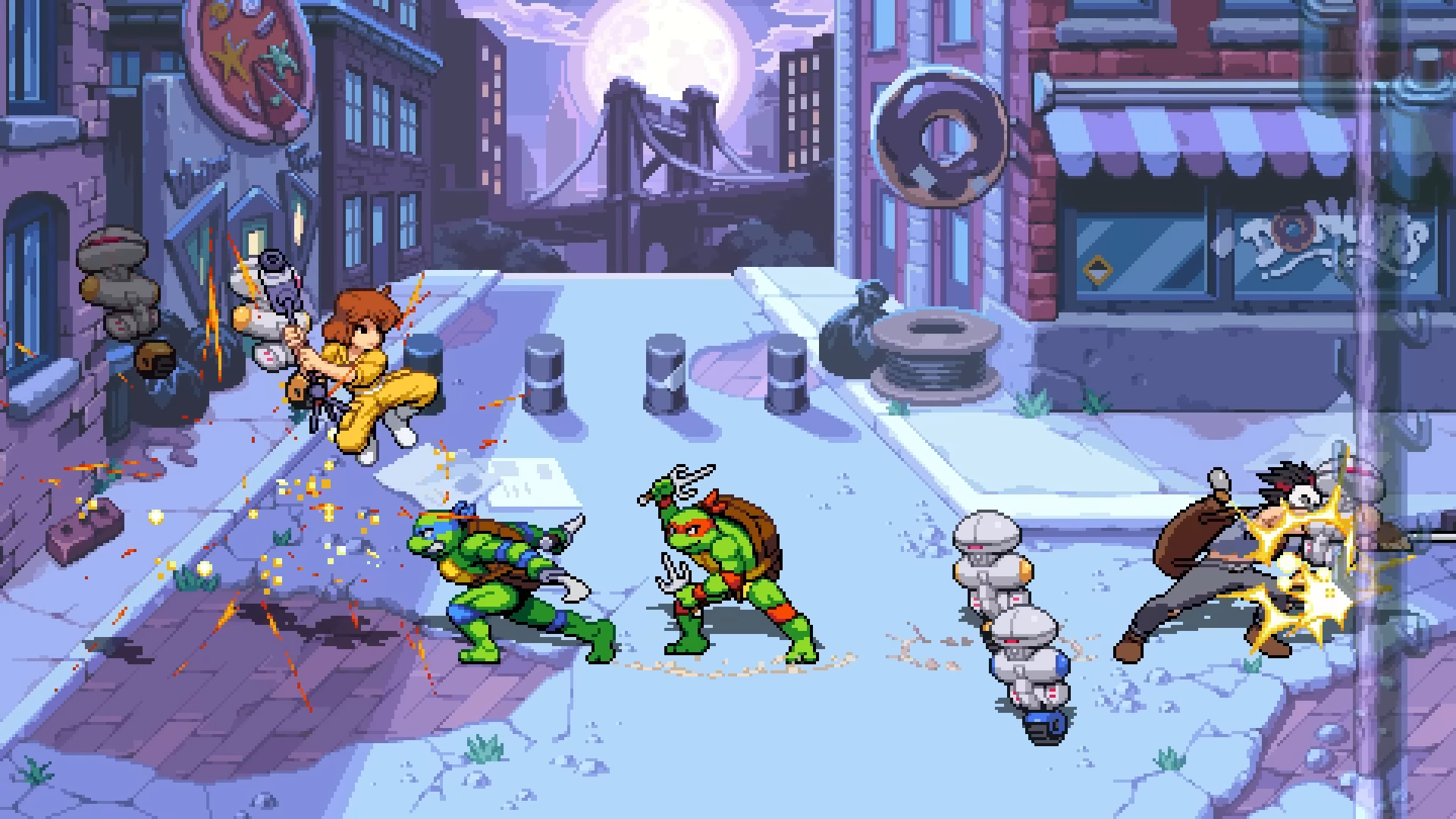 The aforementioned gameplay of Shredder’s Revenge is one of the main highlights of the game, but it doesn’t stop there. The music is also appropriately themed, harkening back to the tuneage of the cartoon series, with all the processed guitar shredding and synthesizers once could ask for. It’s excellent, and really fits the dynamic of the game. 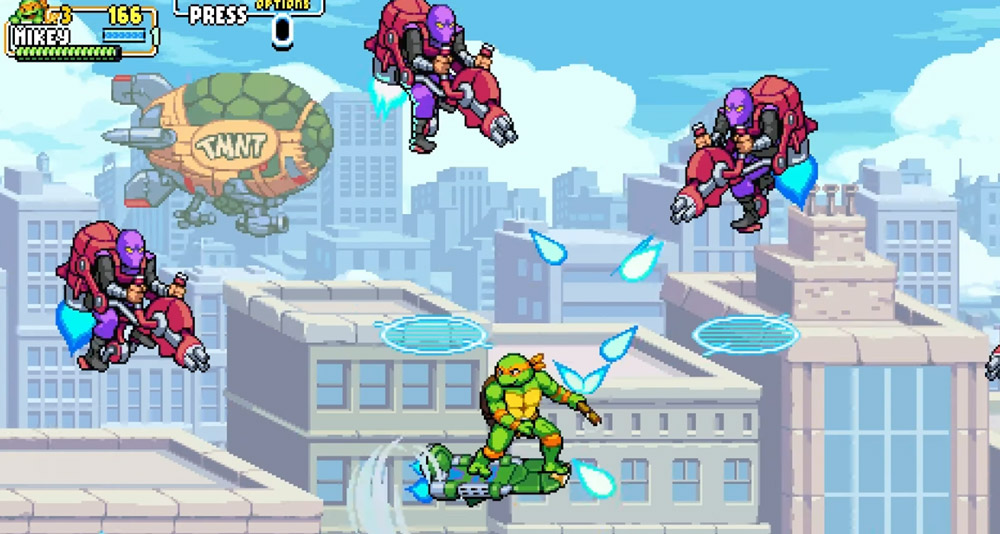 It is, however, inconsistent, hopping back and forth between songs that sound lifted off the B-side of the original Turtles in Time soundtrack, versus odd (but very cool) numbers complete with fully voiced lyrics and rapping. It’s noticeable enough to break immersion, but with a game this zany and wild, who really cares?

Multiplayer is a huge highlight of Shredder’s Revenge, and Tribute built it with this specific purpose in mind. At every turn, the game urges players to team up with friends or random players, and throw a party. It’s hard to describe playing this game with several other people to take down Shredder and his henchmen. 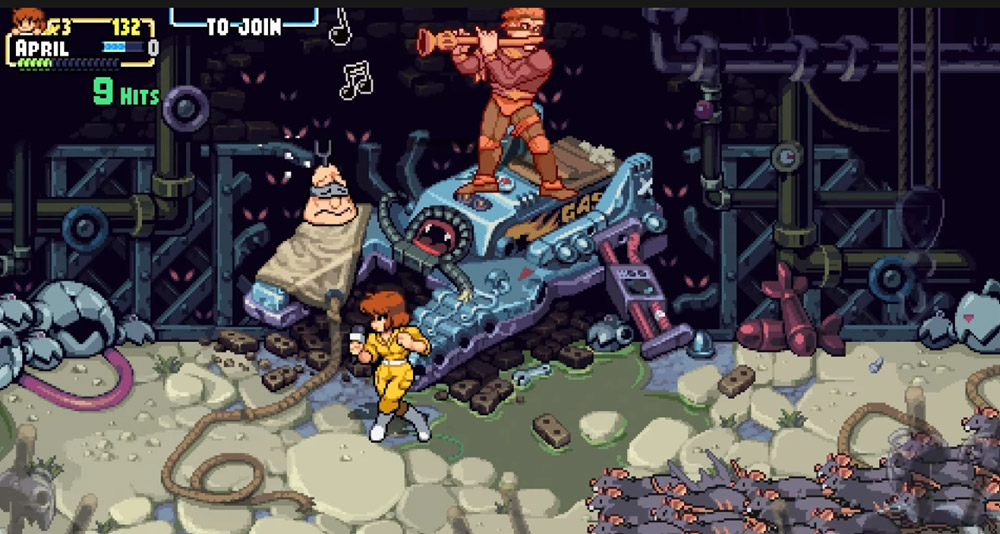 Unfortunately, it will never recapture the magic I personally felt way back in 1989, dumping quarters into a huge 4-player arcade cabinet along with three kids I had only just met then, and having the time of our lives. That kind of in-person comradery is pretty much extinct these days, but Shredder’s Revenge offers the closest approximate alternative, and that’s good enough for me.

Of course, the level of detail is truly phenomenal. Every stage is littered appropriately to the theme, and a lot of love went into polishing the environments, and the events unfolding in the background. It all feels extremely lively, which is integral when trying to create an atmosphere of fun and excitement. 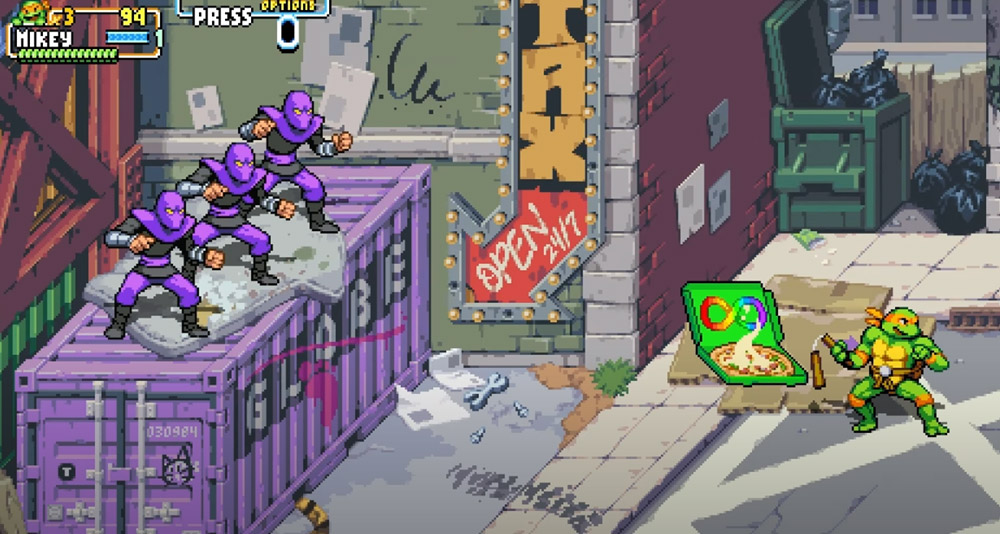 And that’s really the main takeaway of Shredder’s Revenge – this is a game meant to make you feel good, get you excited, and end with a smile on your face.

It’s upbeat, it’s charming, and it encapsulates everything that made kids smile when they were growing up with the original cartoon series. 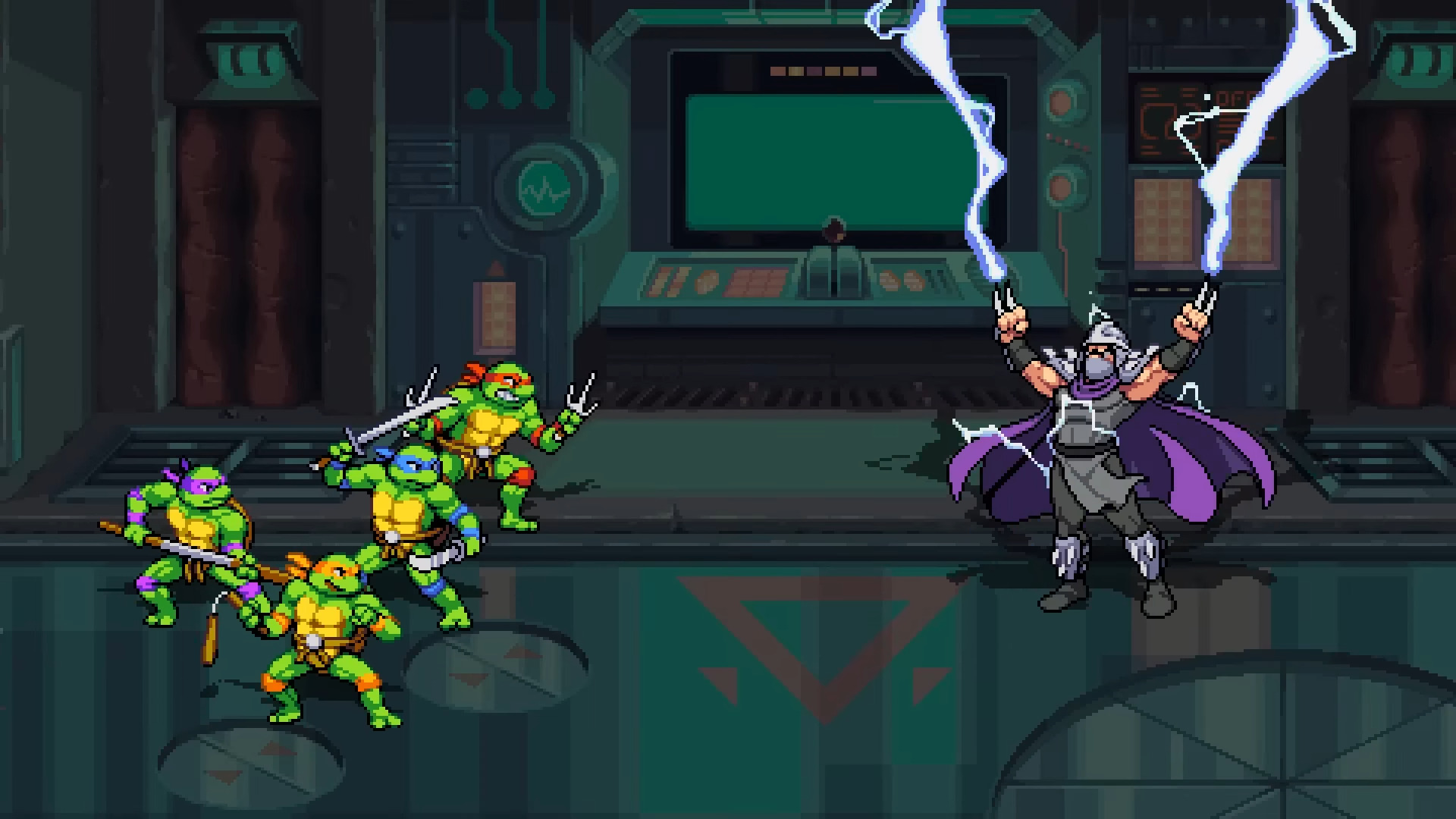 Shredder’s Revenge is a lot of fun to play, but it does suffer from a few glaring missteps. First, no matter how much Tribute managed to beef up the side-scrolling action formula, it’s still relatively the same thing all over again. That’s Okay, because fans already know what they’re getting into when they press the Start button. 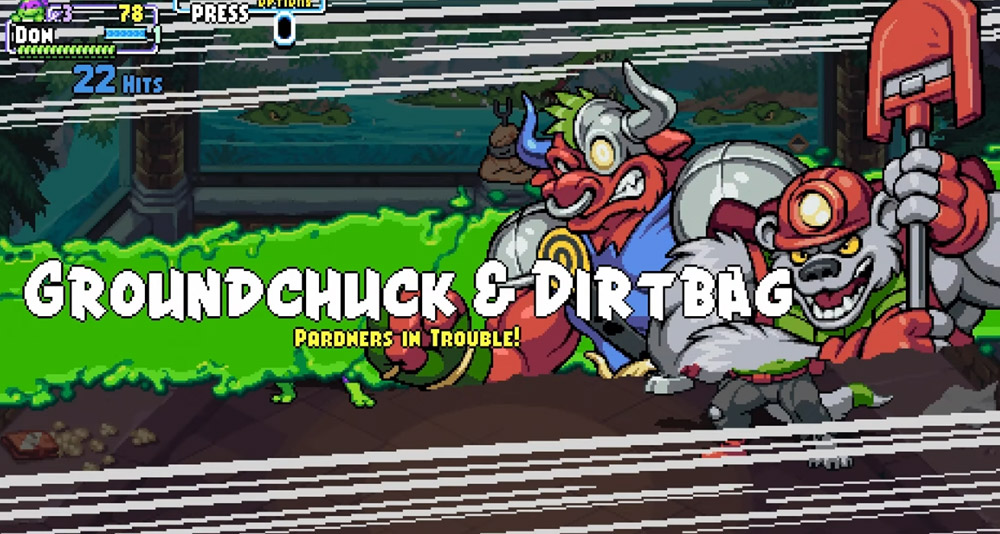 However, the game doesn’t offer quite the same maximization of gameplay potential as say, Streets of Rage 4, which tried to pull out all the stops in order to break out of the established mold. For that reason, Shredder’s Revenge feels a bit basic, but at least the $30 price tag helps offset that fact.

There are a few gripes when it comes to the gameplay, mostly surrounding the enemy attacks. There’s nothing wrong with a challenge, but there are moments in the game when absorbing enemy damage feels unavoidable, and mandatory. A lot of this could have been alleviated with less sluggish jumping mechanics, which means players will need to practice up a lot. 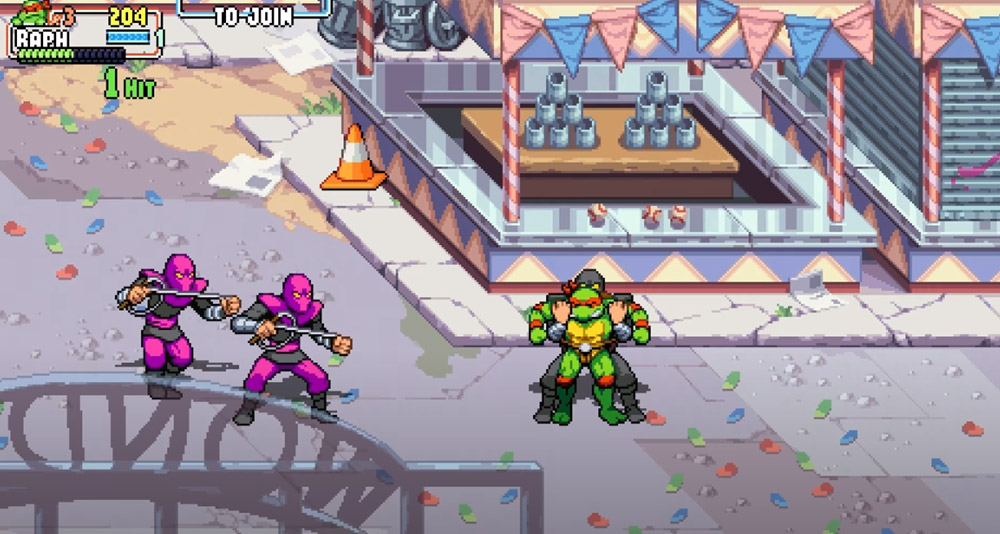 Second, the pixelated-on-purpose artwork feels like a foot placed wrong, sorry to say it. It’s obvious what Tribute was trying to do here, but after coming off of Streets of Rage 4’s beautifully painted character sprites and backgrounds, it’s hard to appreciate the jaggies that permeate every single aspect of the visual experience.

Of course, this is purely subjective, and many fans will adore the nostalgic throwback to the days of scanlines, CRTs and low-res visuals. That was obviously the goal here, but it would have been better if Tribute had offered the pixilation as a graphical filter in the options menu, as opposed to a full-fledged creative decision.

And finally, the cover of the classic TMNT cartoon theme song should be taken out into the street and shot. One can’t improve on perfection. 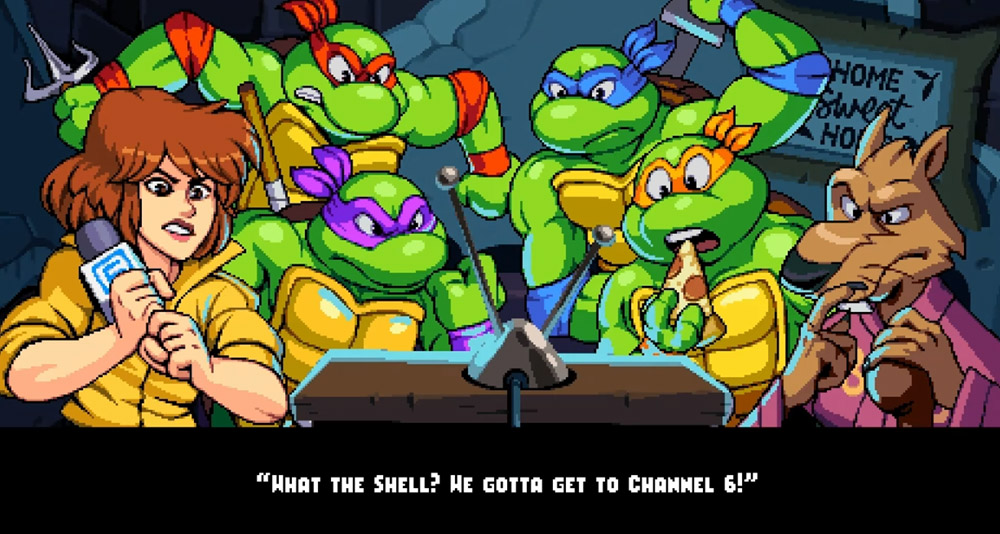 For the low price tag, Shredder’s Revenge is a no-brainer, but only if you’re a fan of the franchise, and side-scrolling brawlers in general. It’s definitively a cut above the rest in terms of gameplay, and it remains to be seen what Tribute and Dotemu will offer in terms of DLC content moving forward. 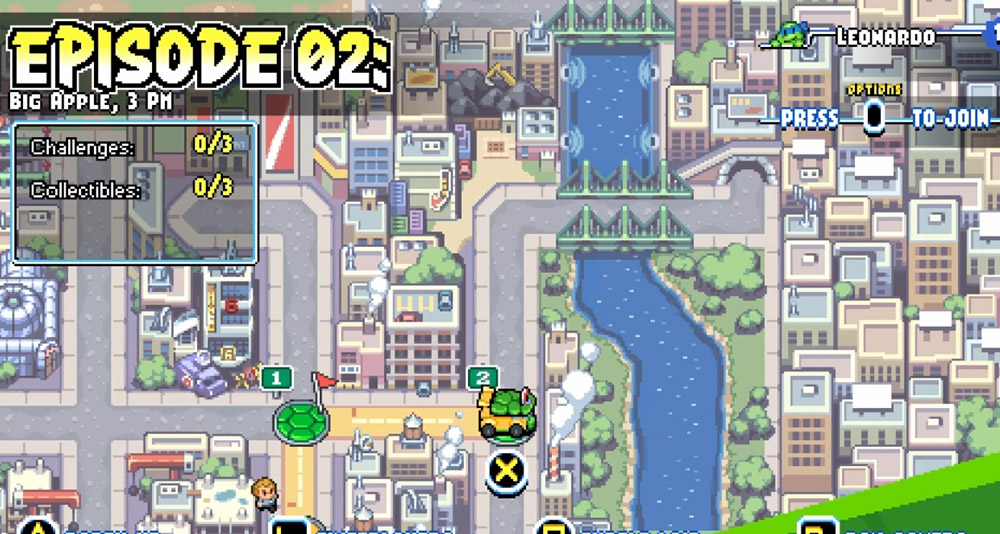 I can’t promise it’ll be a game that many will play for the hundredth time, but it will satisfy a craving for some good old-fashioned arcade fun, and there’s plenty of room to improve your fighting skills. You will need them, because this game is challenging, particularly on Gnarly.

For those who never grew up in the 1980s, the wackiness and humor of the game might be lost on them, but Shredder’s Revenge is certainly an excellent gateway drug for anyone interested in learning why Teenage Mutant Ninja Turtles was such a cultural phenomenon back then, and why it still resonates with fans more than 30 years after the fact. 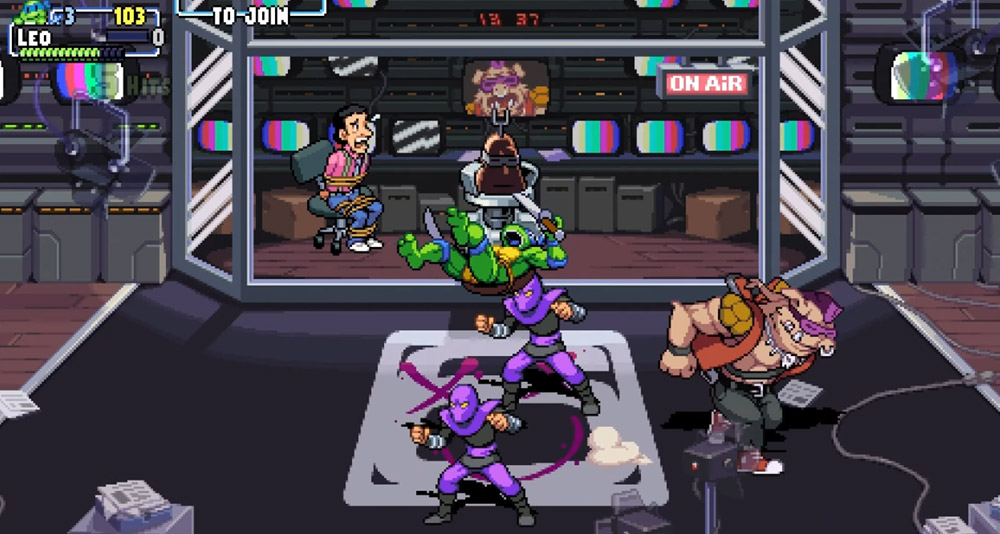 Congratulations to Tribute Games for accomplishing what many fans only dream of, and bringing the good old days back to modern gaming.