Just three days after being rushed to the hospital with what DC Comics Co-Publisher Jim Lee informed fans were “severe health issues,” it has been officially reported that legendary comic book artist Tim Sale has passed away. 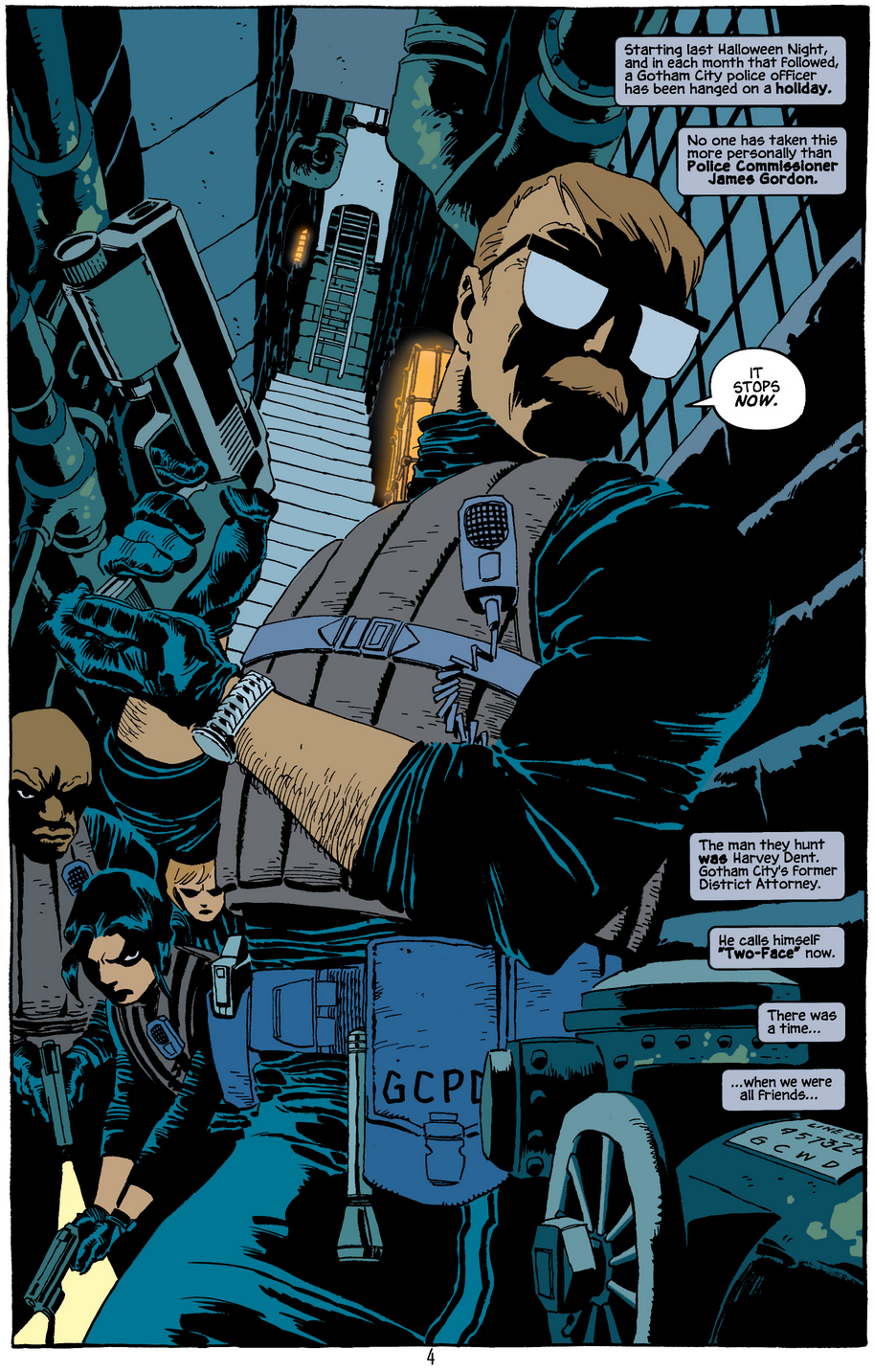 The tragic news was broken by a representative for Sale’s official Twitter account, @ArtBySale, who on June 16th tweeted, “It’s with a heavy sadness that I must announce that Tim Sale passed away today.”

“He passed with the love of his life beside him, and loves all of you very much,” they added. “Please share photos and stories under this post, as we hope to share them with the community.”

As noted above, Sale’s sudden health issues were first reported on June 13th when Lee took to Twitter to tell fans, “I regret to share the very sad news that the legendary artist Tim Sale has been admitted to the hospital with severe health issues.”

“Tim, I am praying for you, buddy,” he added. “Stay strong & know that your legions of fans around the world loves & cherishes you & your amazing talent.” 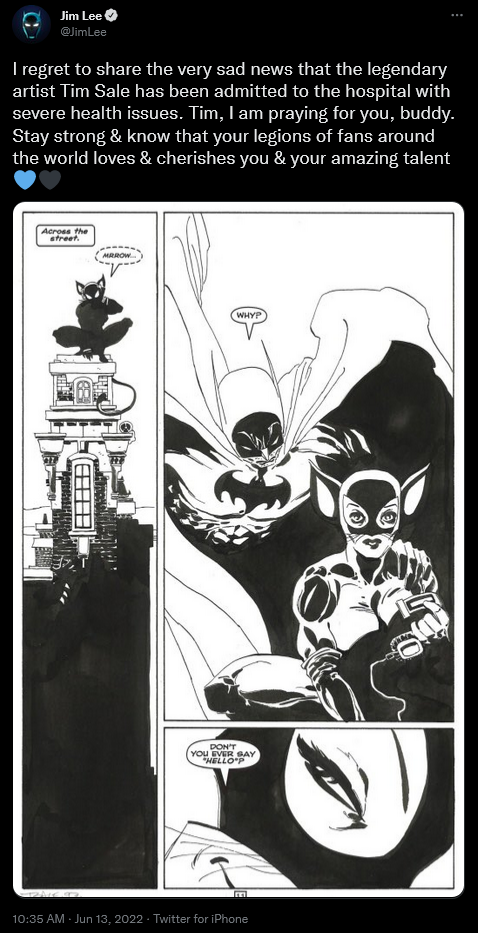 Sale was – and likely will remain – one of the most universally praised artist’s of the last couple decades, with many hailing his Batman: The Long Halloween collaboration with Jeph Loeb as one of the greatest Batman stories ever told.

Continuing to work together, Loeb and Sale would go on to produce a number of widely lauded series, including Batman: Dark Victory, Batman: The Haunted Knight, Catwoman: When In Rome, and Superman for All Seasons. 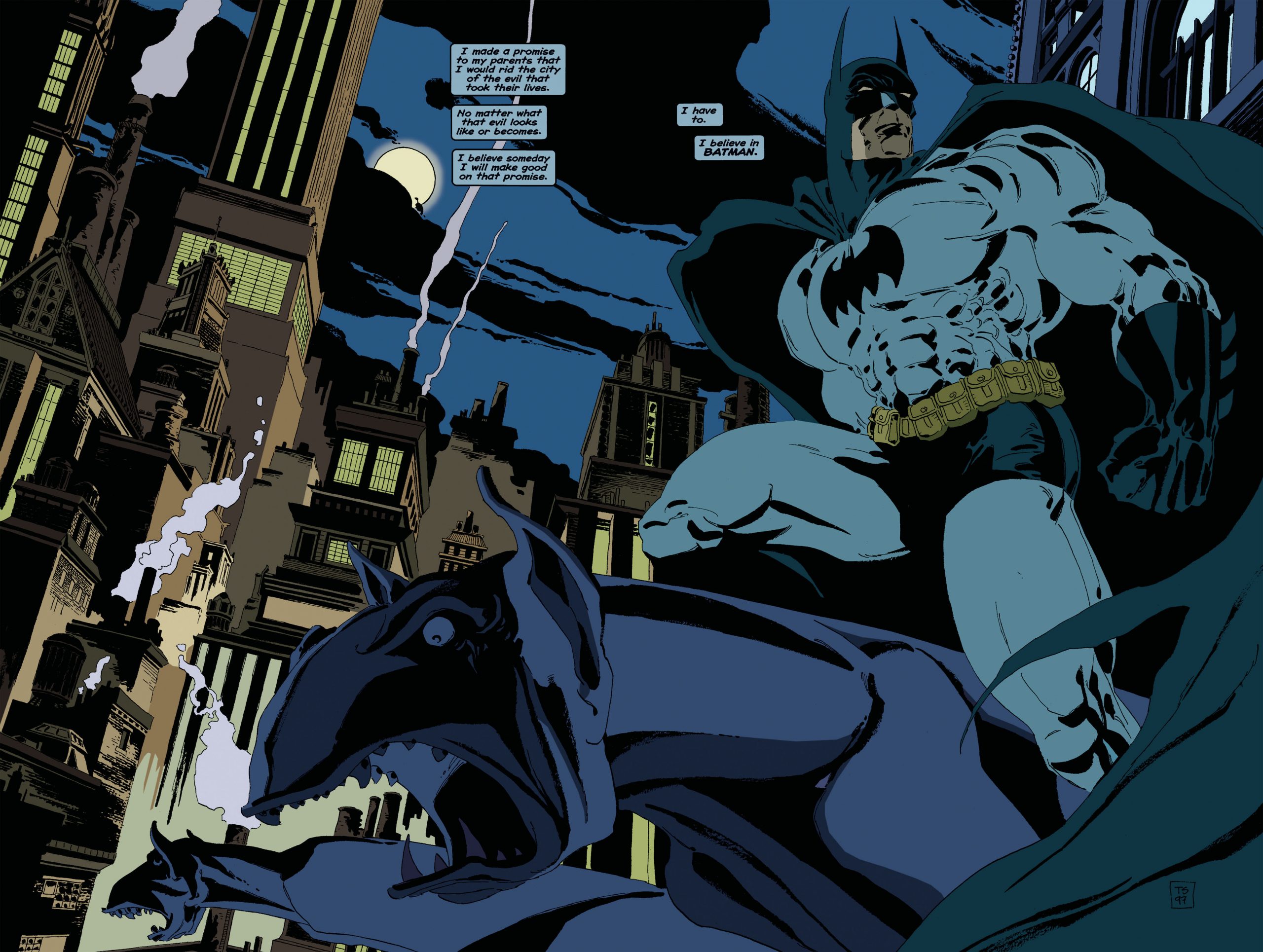 The pair also produced a series of books for Marvel which saw them tell a story chronicling the early days of a given hero’s career themed around the colors of their costume.

This line included Captain America: White, Hulk: Gray, Spider-Man: Blue, and Daredevil: Yellow – the latter of which, similar to Batman and The Long Halloween, is regularly heralded as one of Horn Head’s most iconic stories. 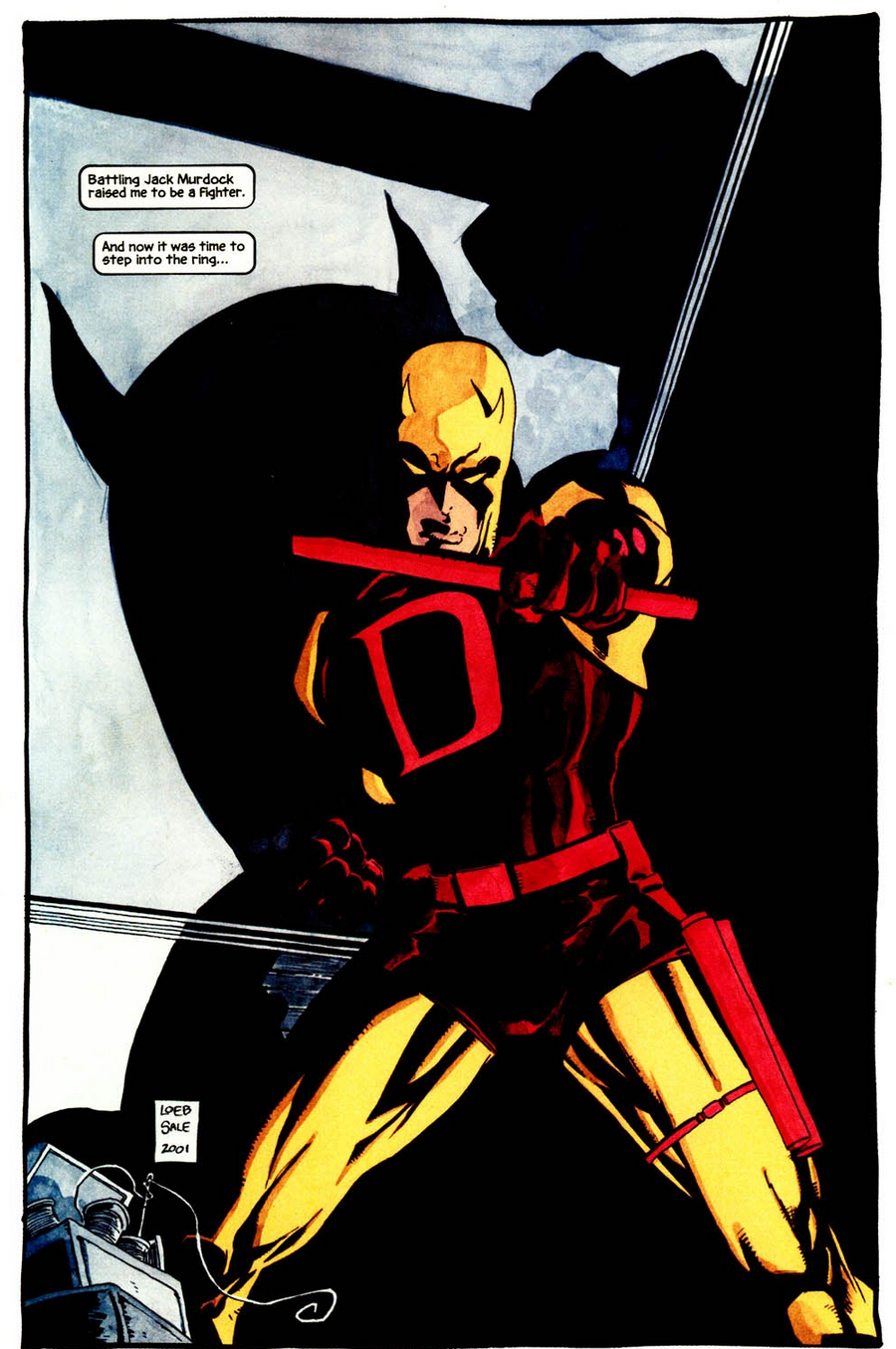 Having worked in the industry since the 1980s, Sale was the recipient of the 1999 Eisner Award for “Best Artist/Penciller/Inker or Penciller/Inker Team” for his work that year on Superman for All Seasons and Grendel: Black, White, and Red #1.

In an echo of the sentiments posted when it was first announced that he had been hospitalized, heartbroken fans and professionals from across the industry reacted to the news of Sale’s passing by taking to social media to memorialize the artist, share their condolences with his family, and speak to how much his art meant to them. 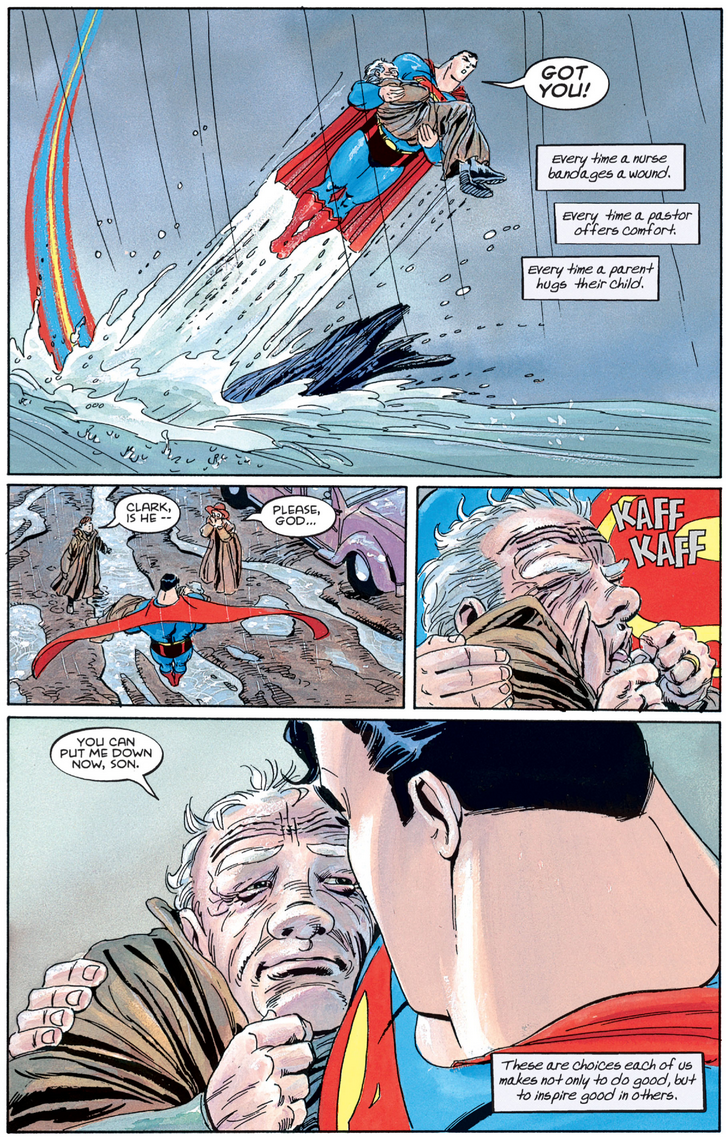 Sharing artwork from Sale’s aforementioned ‘colors’ line, Marvel asserted, “Tim Sale was a legendary artist who created comic book masterpieces across and beyond the industry.”

“At Marvel, his Color series became stunning classics and remain just a glimpse at his acclaimed legacy,” the publisher added. “We mourn his loss today, and our thoughts are with his family & loved ones.” 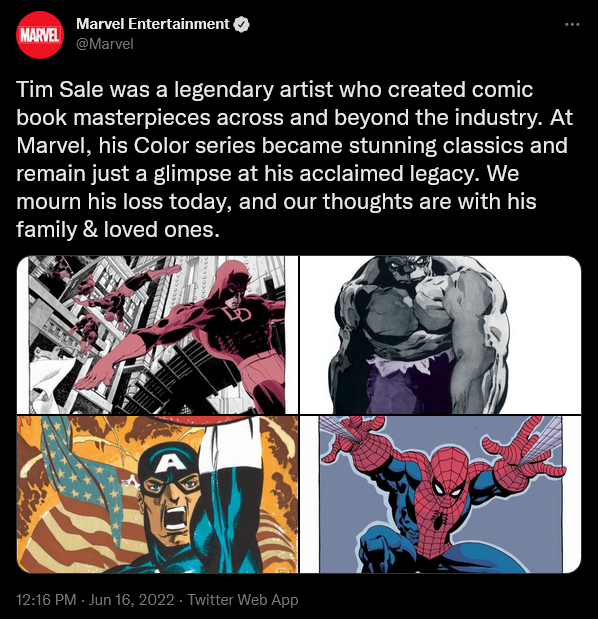 “Our condolences go to Tim’s family and friends,” they said. “He will be deeply missed.” 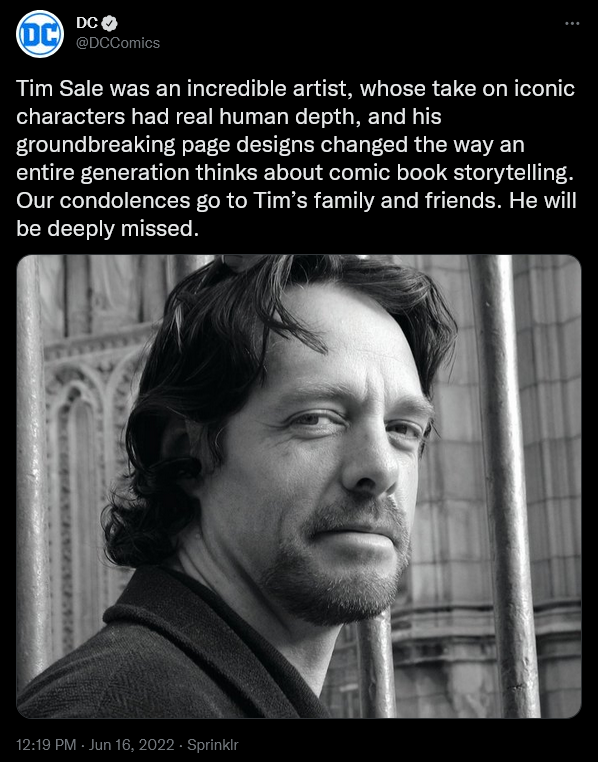 Lee himself would recall, “Tim Sale was an amazing artist, draftsman & storyteller. He had that special kind of talent you encounter once in a generation. I’m convinced his work stood out because he was simply fearless. He didn’t care that his work looked different from the mainstream house styles.” 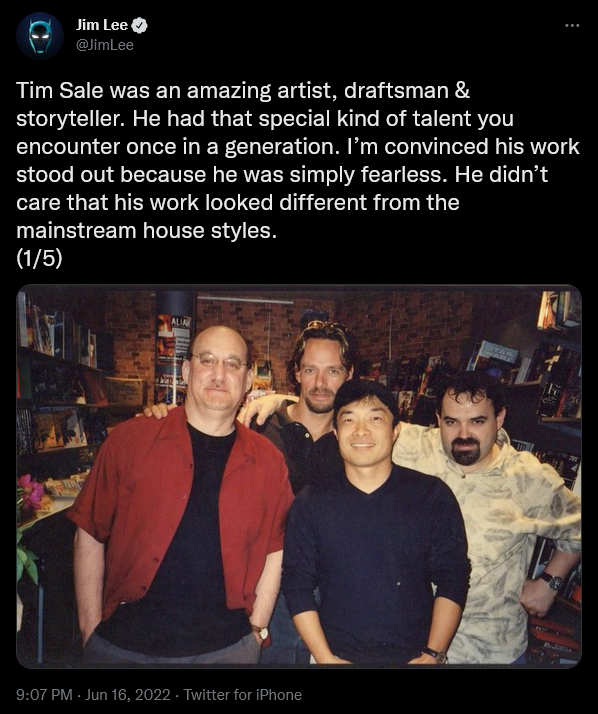 “Beyond the taut chiaroscuro style which became his trademark, Tim clearly put a premium on storytelling, clarity and pacing—cherishing emotion above all,” the DC head added. “His stories were beautifully visceral, nuanced and evinced deep humanity. Tim simply had no use for surface banality.” 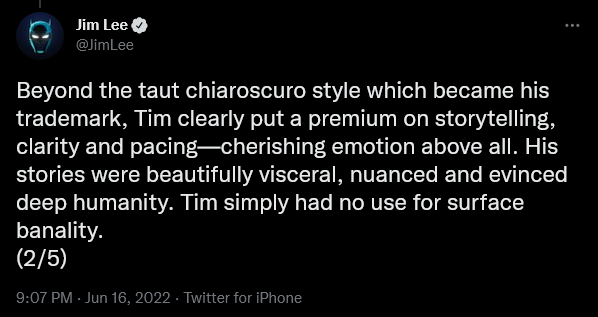 “I think he’d freely admit his style was neither slick or hyper detailed or particularly precious, but he quickly became both an artist’s artist *and* also a fan favorite which is not a common combination,” he continued. “Truthfully, he had that kind of talent usually associated with the most arrogant or self absorbed among us.”

“But not Tim,” said Lee. “He was such a sweet, kind and good natured soul.”

Referring to the picture with which he opened the thread, Lee elaborated, “Here’s one of my fondest memories with [Sale] and his longtime collaborator writer [Jeph Loeb] and our close mutual friend [Olivier Jalabert].” 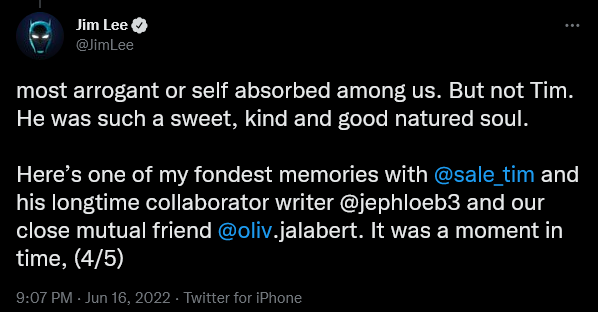 ” It was a moment in time, celebrating a marathon signing at the legendary Album Comics shop in Paris, most likely in 2004,” he concluded. “I feel fortunate to have called him a friend and will miss him beyond words. Tim passed away this morning. He was only 66.”

Reposting Lee’s thread to his Facebook page, Jalabert commented, “The year was 2004 I believe, we had such fun at Album Comics Paris with Jim Lee, Tim Sale and Jeph Loeb. Old times, great times”. 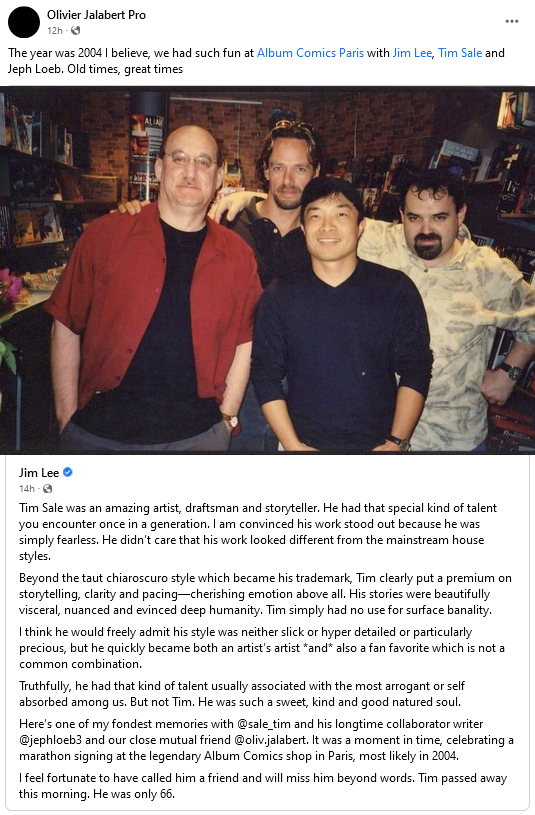 Hellboy creator Mike Mignola reflected upon Sale fondly, saying, “Very sad to hear that the great Tim Sale has passed. I hear it was peaceful which, I suppose, is what you hope for. He was funny and super smart and a great talent. And gone way too soon.”

“He will be missed,” he wrote, sharing a “Portrait (which Tim actually got to see) by Bill Sienkiewicz.”

“Let me add: Tim Sale was COOL,” he declared. “How cool? Once, over dinner, he dropped that he’d seen the Beatles in concert.” 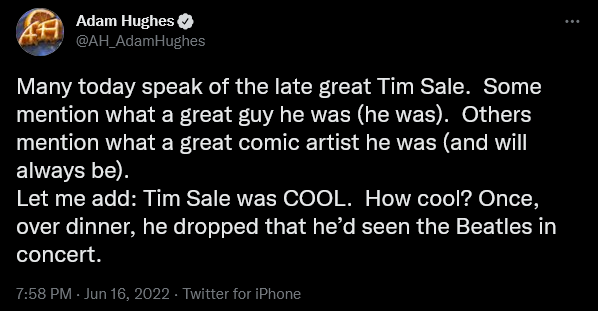 Posting a cover Sale did for the 50th issue of his recent run on the series, former Batman writer Scott Snyder recalled, “I was lucky enough to hang out with Tim a number of times and he wasn’t only a legendary and inspiring creator, he was a kind, generous, and compassionate human being. RIP“. 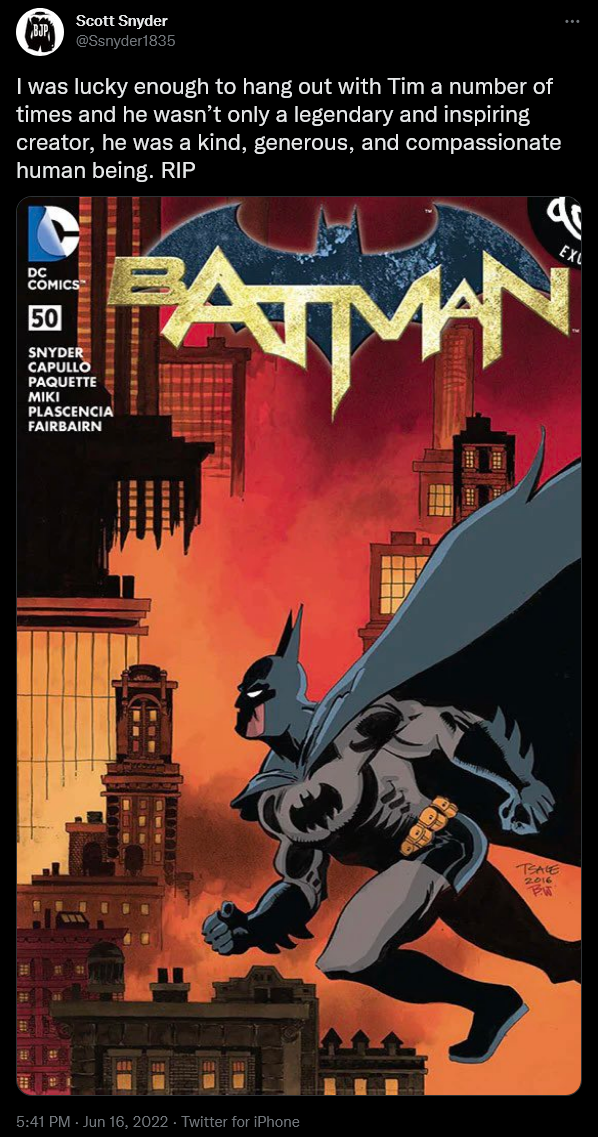 Acclaimed independent artist Dan Fraga also posted his sadness at the loss of Sale, stating, “RIP to one of the best” on both his Facebook page and Twitter account. 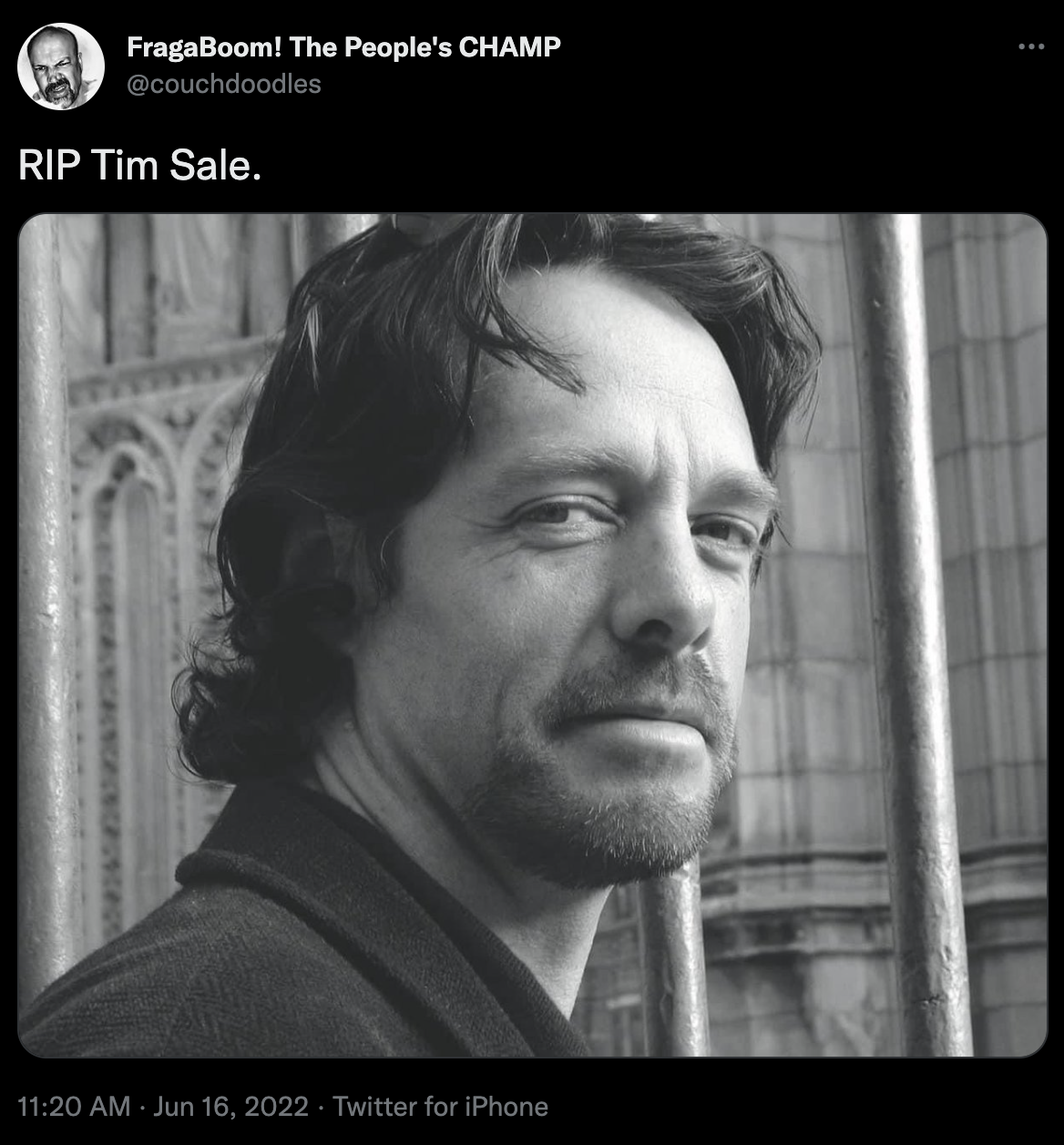 Omar Valdivesio, one of the most popular comic-related YouTubers thanks to his channel, Near Mint Condition, focuses on comic book collected editions, posted: “RIP Tim Sale. Another legend gone too soon!” 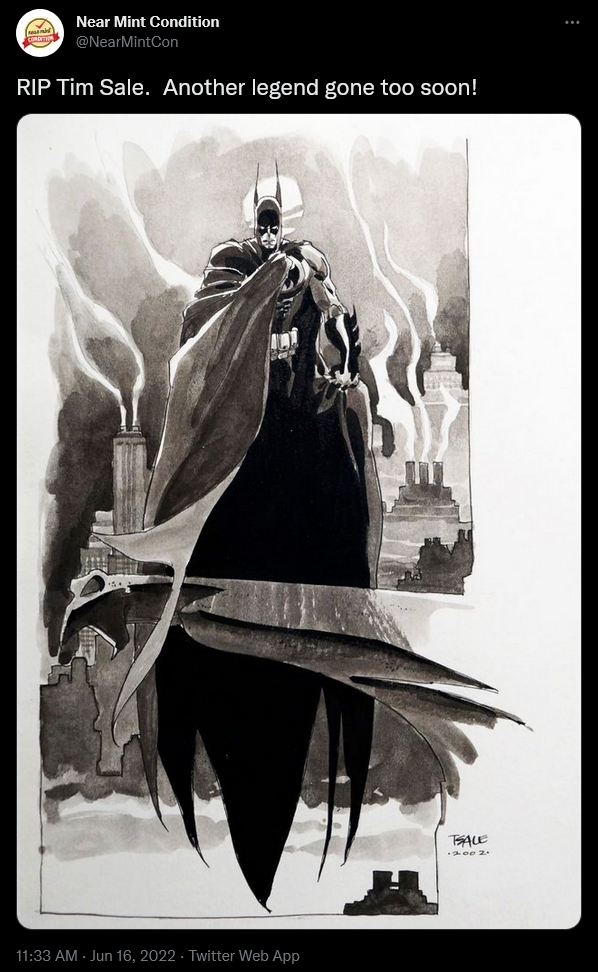 He also left a reply to the official announcement of Sale’s passing from the @ArtBySale Twitter account, likewise asserting, “Breaks my heart to hear this.”

RELATED: 5 Indie Comics That Look Worth Your Money

Speaking further with Bounding Into Comics, Valdivesio added, “I am in shock still, there are no words that can sum up how much his art meant to me.”

“He had such a unique art style that you immediately recognized even from far away,” said the YouTuber. “Learning that he was color blind a few years back just put how much of a master of art he was into perspective.”

At the time of his passing, Sale lived in the Seattle, Washington area and was sixty-six years old. The cause of death has not currently been disclosed.

Ultimately, Bounding Into Comics would also like to give our condolences to Mr. Sale’s family and friends, and recognize him as one of the great artists of the industry. 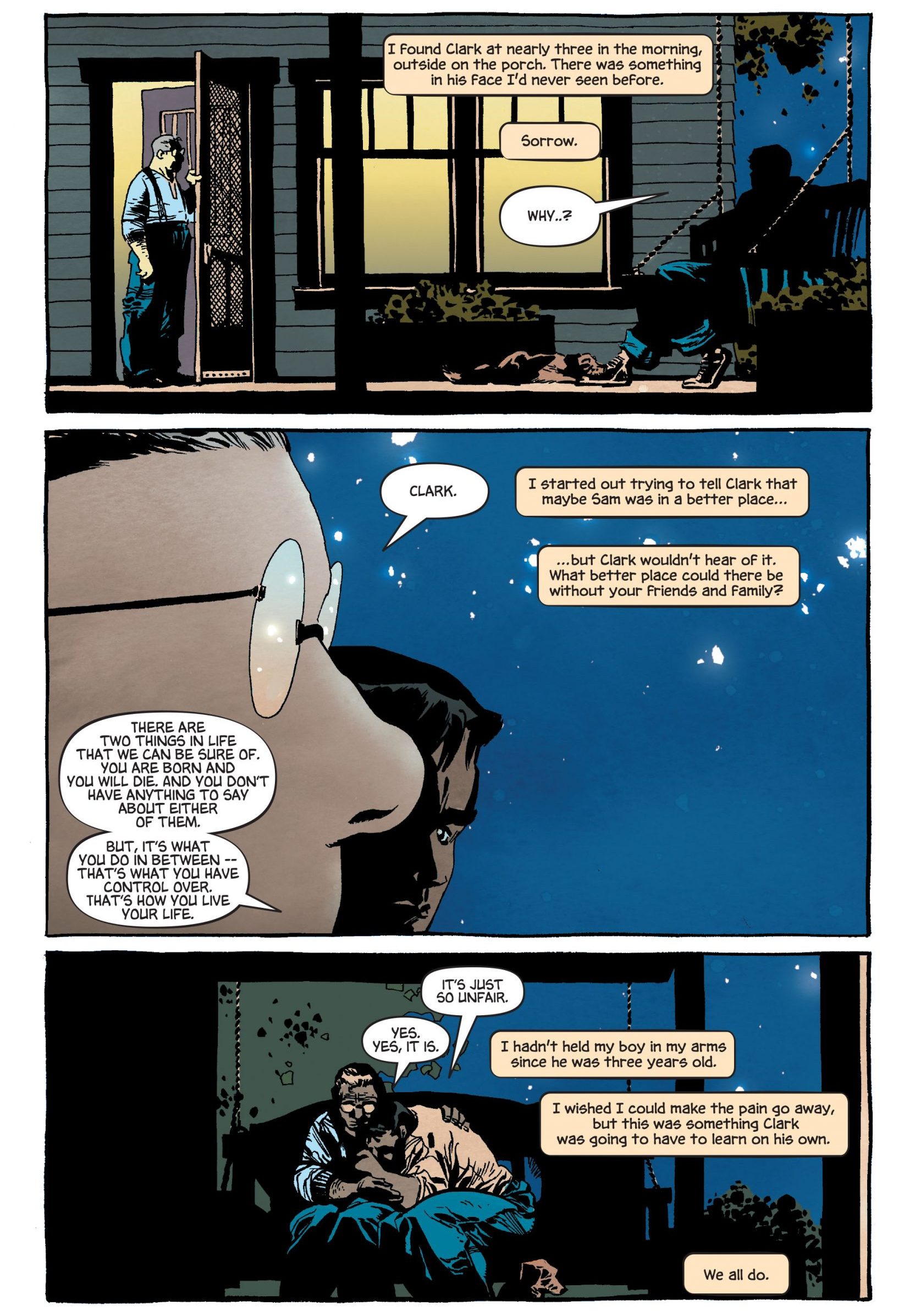 How did Tim Sale’s art impact you? Leave a comment down below or on social media and let us know what you think!