Actress Ana de Armas has built up quite a resume in the last few years with notable roles in films such No Time to Die and Blade Runner 2049. However, that doesn’t mean she is well-known, because not only did Jamie Lee Curtis have no idea who she was when they filmed the 2019 film Knives Out together, but Curtis thought Armas was ‘inexperienced’ and ‘unsophisticated’ when they first met, because she was Cuban. 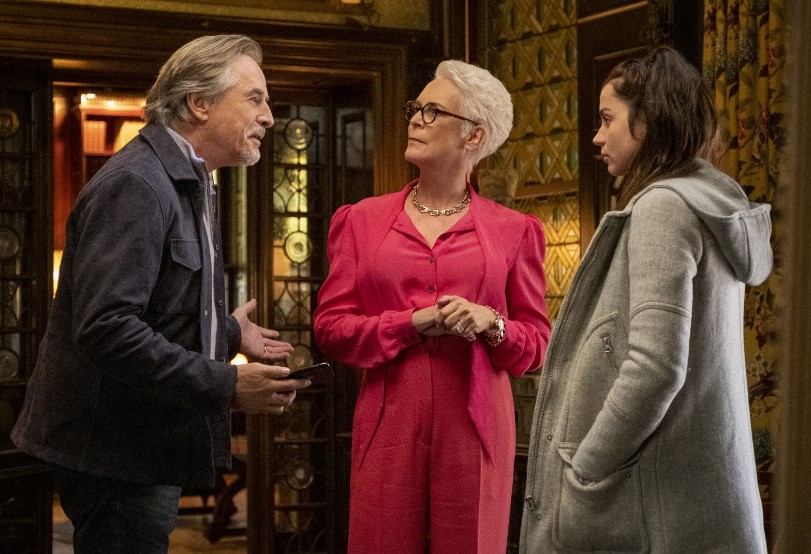 In an interview with Elle magazine, Curtis said that she assumed de Armas had just arrived from Cuba and was new in Hollywood when the two met on the Knives Out set. “I assumed, and I say this with real embarrassment because she had come from Cuba, that she had just arrived,” Curtis said.

“I made an assumption that she was an inexperienced, unsophisticated young woman. That first day, I was like, ‘Oh, what are your dreams?’” Curtis explained that she asked de Armas because she was so impressed with her that Jamie wanted to introduce her to her godchildren Maggie and Jake Gyllenhaal. However, she was surprised to learn that de Armas already knew Jake. 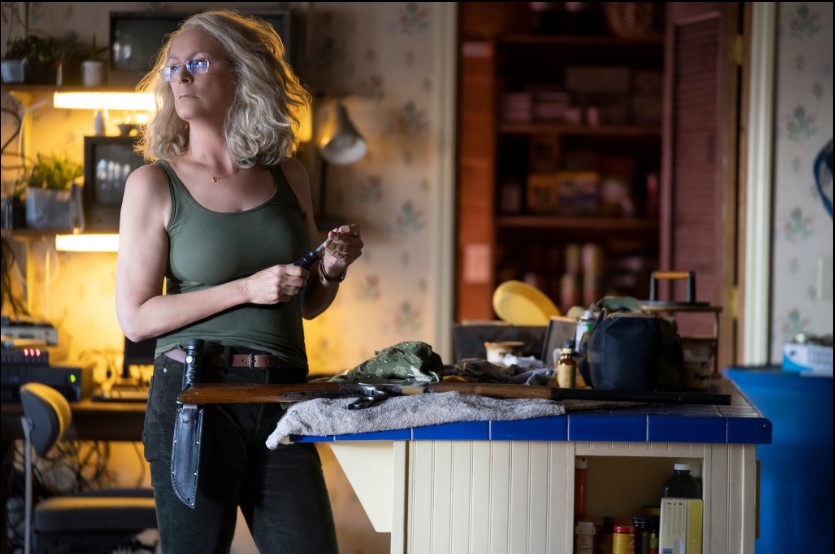 RELATED: Jamie Lee Curtis Says She And Her Husband Are Proud To See Their Son Transition Into A Woman

There is a lot to unpack here. Ana de Armas was born in Havana, but hasn’t lived there since her teenage years. De Armas had already been working in Hollywood for a number of years before working on Knives Out. It’s one thing to simply not know who Ana de Armas is, but another thing to assume that she is inexperienced and unsophisticated because she was a fresh off the boat Cuban woman. 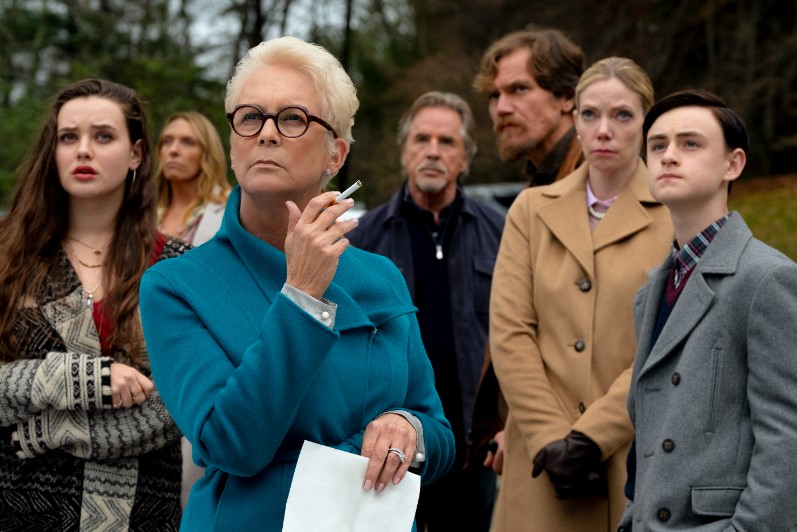 The irony is that the film Knives Out was praised by progressive film critics for the way it attacked Trump supporters in the film.  Ana de Armas plays the nurse of the patriarch of a wealthy family. When he suddenly dies, the rest of the family meet up to figure out how his wealth will be divided, leading to a murder mystery.

The film, which was written and directed by The Last Jedi’s Rian Johnson, does not attempt to hide its disdain for “MAGA People,” and critics gushed about it calling it a fun ‘f*** you’ to rich white Trump voters. While the film took numerous shots at the Trump family for their supposed racism and selfishness, it was Jamie Lee Curtis who ironically displayed the same bigotry that she accused others of. 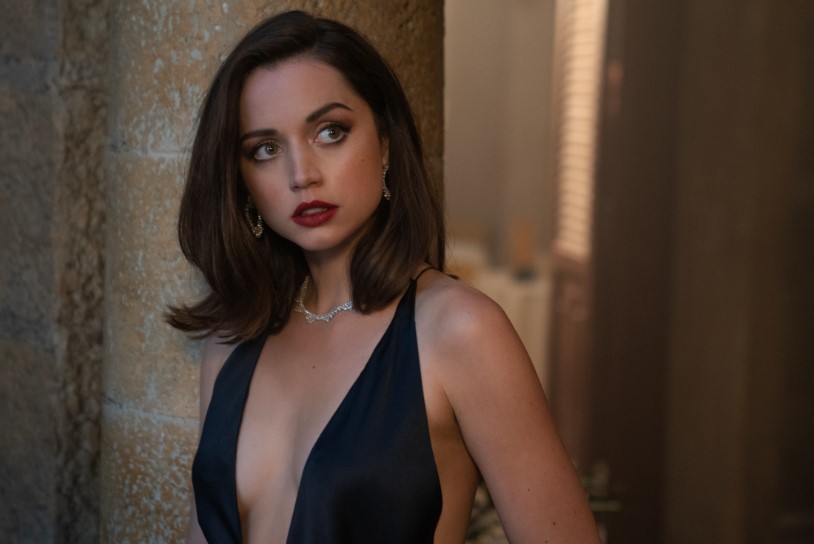 People were not happy about Jamie Lee’s comments, and many called her out for the backhanded racism in her statement. “The casual racism of Jamie Lee Curtis re; Ana De Armas is… both infuriating and totally expected. It’s cringy as hell, and also exactly in line with how Americans are told and taught to think about both Cuba specifically and Hispanic people generally.” 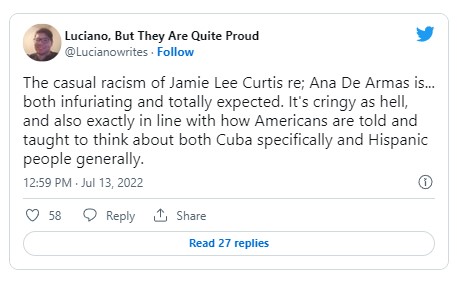 “Jamie Lee Curtis really showed her white savior complex, for the poor little Latina from Cuba, with her whole fucking chest when talking about Ana de Armas. Imagine having the audacity to say something like this? In this economy? It’s baffling…” 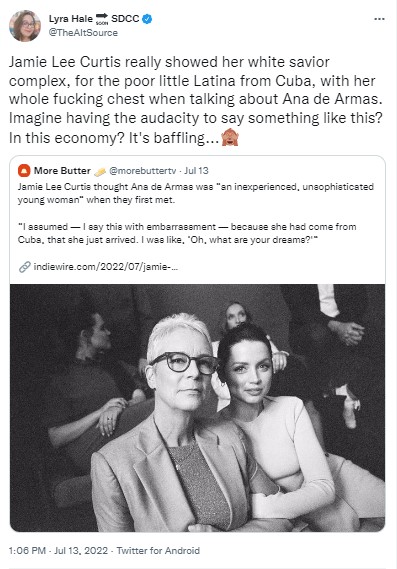 “Pretty funny that everyone was happily allowing Jamie Lee Curtis to coast along as a “progressive” older Al celebrity because of how vocally supportive she is of her Trans daughter, only for her to go: “No, no; don’t worry. I’m quite racist.”” 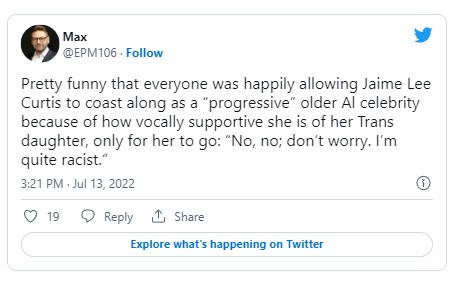 “Jamie Lee Curtis like time after time proves that she is INSANELY stupid and has like super backwards views about non-White people. It’s a miracle her PR agent hasn’t stepped in at this point.” 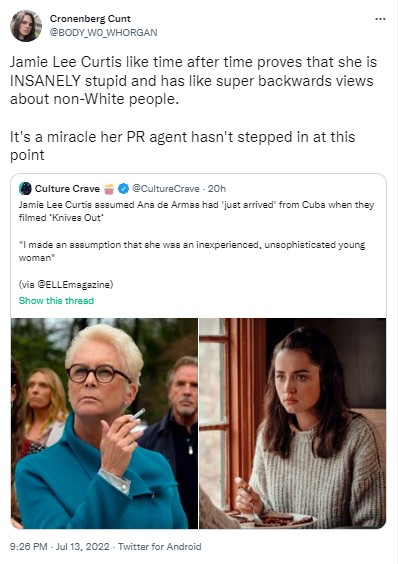 Clearly, people on both sides of the aisle aren’t very happy with Curtis’ racist assumptions about Ana. Next up for de Armas is the Netflix action tentpole The Gray Man, streaming July 22, followed by  the film Blonde, which is a fictionalized take on the life of actress Marilyn Monroe that releases on September 23. Jamie Lee Curtis will star in the conclusion to the Halloween series entitled Halloween Ends on October 14th of this year.