In a huge victory for manga fans, femboys, otokonoko and traps alike, – and a huge loss to the ‘Naive Angel’ (credit to PlatinumGames for this new term) localization mafia, Western manga and light novel publisher Seven Seas Entertainment has announced they will be rereleasing I Think I Turned My Childhood Friend Into A Girl with a localization more in line with mangaka Azusa Banjo’s original vision. 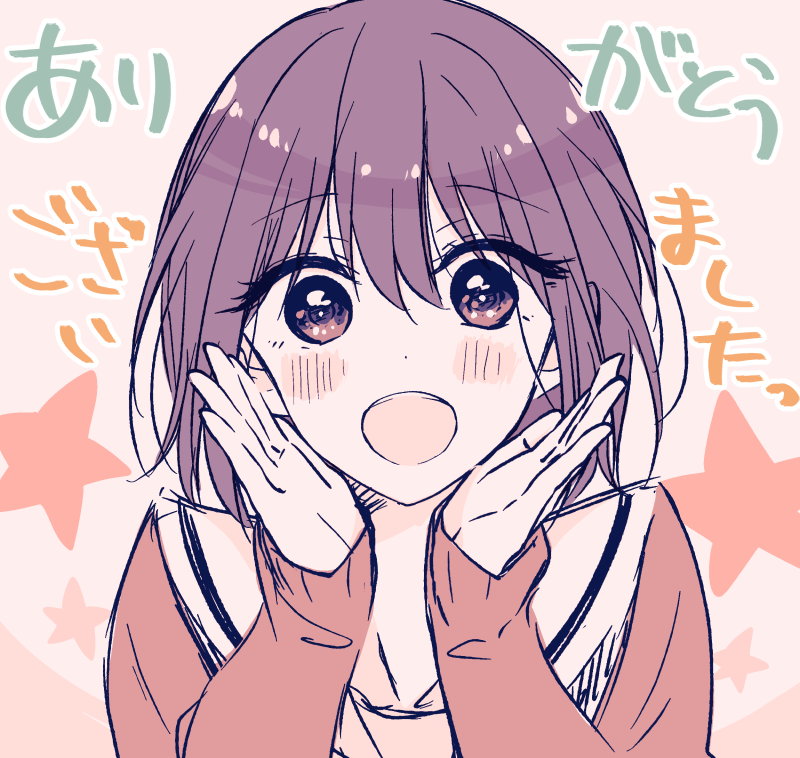 Seven Seas provided an update on the situation on July 19th, roughly a month after fan outrage over the publisher’s decision to overwrite Banjo’s original script and localize the series’ love interest as a transgender woman rather than a feminine, cross-dressing male, prompted the publisher to launch an investigation into the English-language release, via their official Twitter account.

“In response to fan concerns, Seven Seas has thoroughly reviewed our English language translation of I Think I Turned My Childhood Friend Into a Girl Vol. 1,” the publisher informed readers. 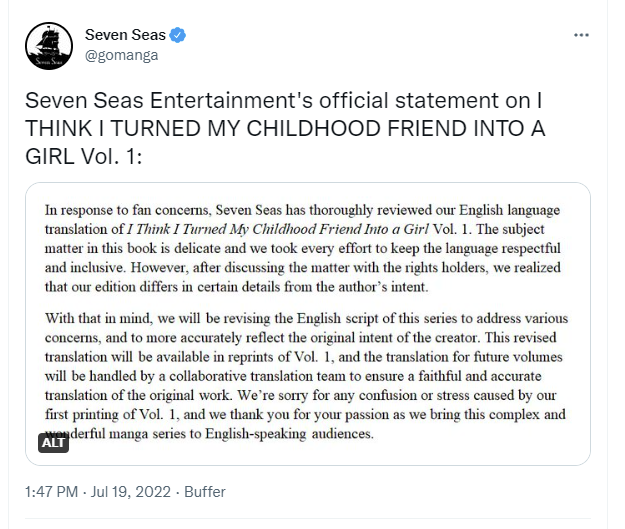 They then admitted that while “the subject he Subject matter in this book is delicate and we took every effort to keep the language respectful and inclusive,” after having discussed “the matter with the rights holders,” the publisher “realized that our edition differs in certain details from the author’s intent.”

“With that in mind,” Seven Seas announced, “we will be revising the English script of this series to address various concerns, and to more accurately reflects the original intent of the creator.” 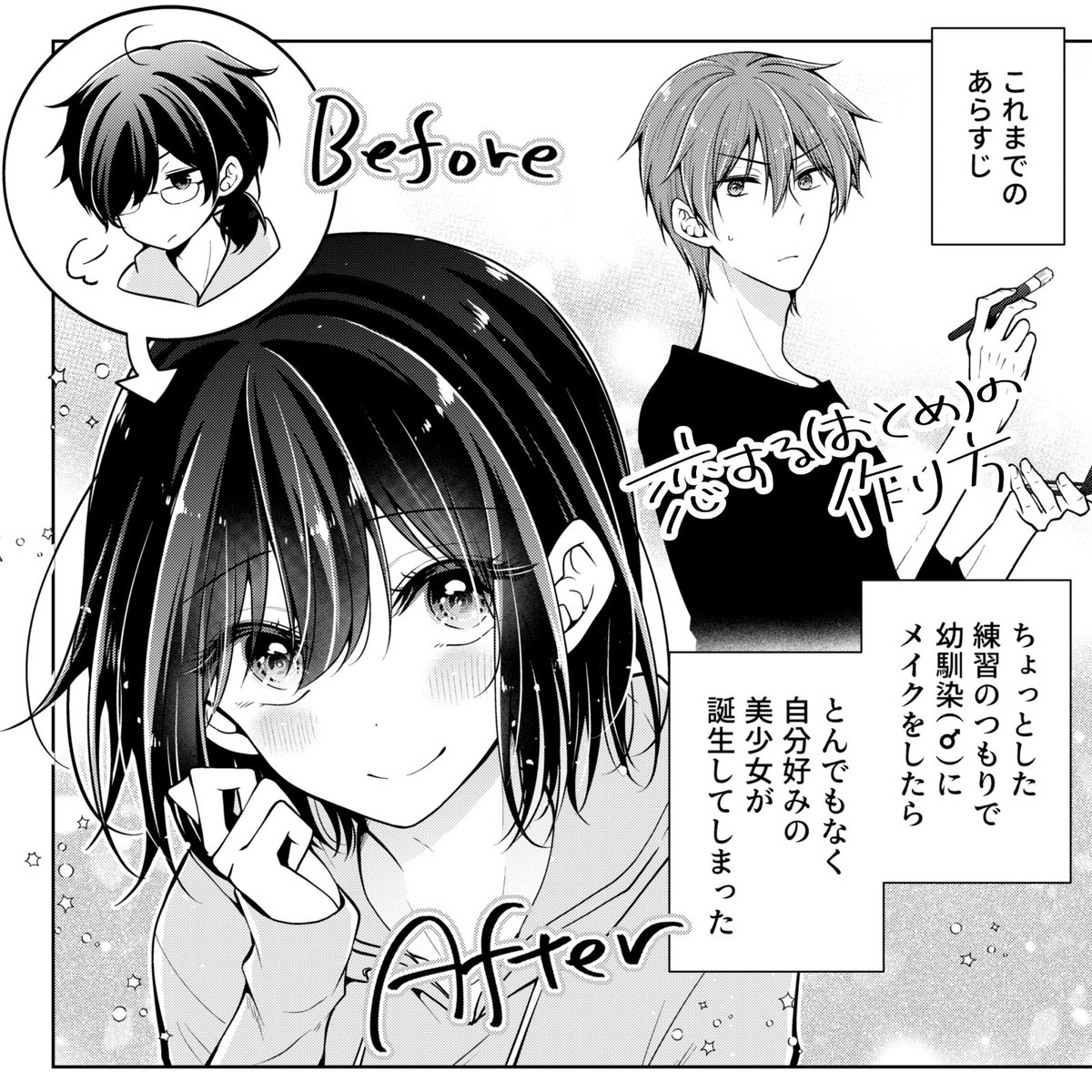 Regarding their plans for rolling out this more accurate English-language release, the publisher explained, “this revised translation will be available in reprints of Vol. 1, and the translation for future volumes will be handled by a collaborative translation team to ensure a faithful and accurate translation of the original work.”

“We’re sorry for any confusion or stress caused first printing of Vol. 1,” the statement concluded, “and we thank you for your passion as we bring this complex and wonderful manga series to English speaking audiences.” 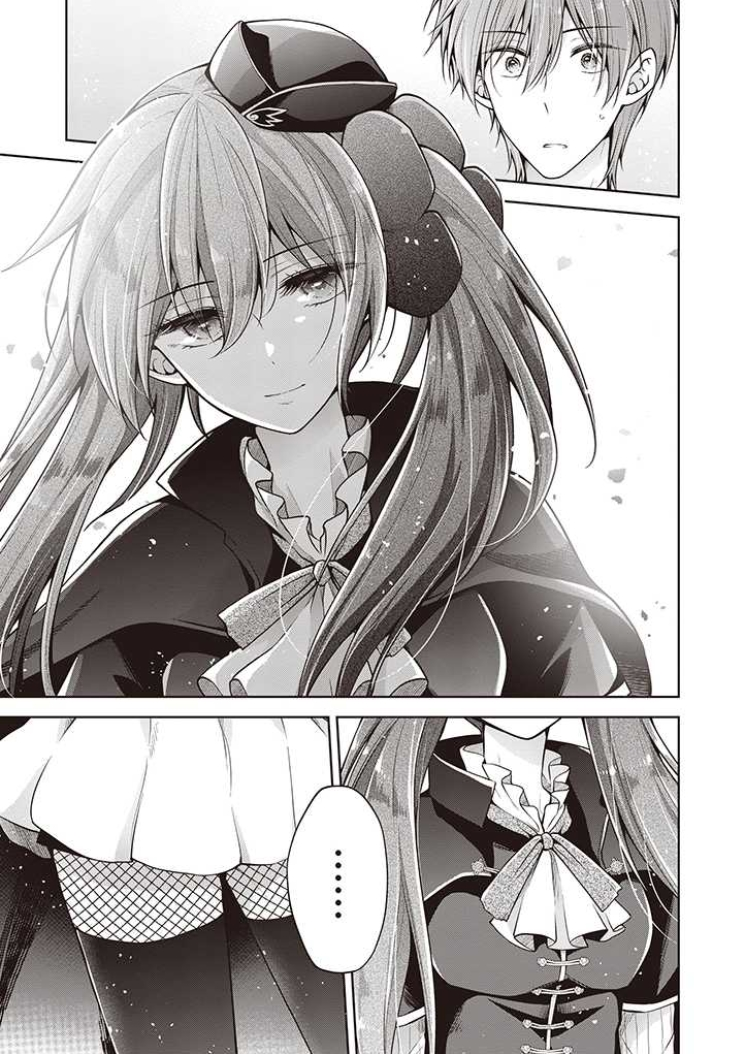 Following this announcemet, Banjo herself tweeted a ‘thank you’ message to the fans who brought the mistranslation to her attention, writing “Thank you for cherishing ‘I Think I Turned My Childhood Friend Into a Girl’ and characters. I’ll continue to create pleasant manga.”

Unsurprisingly, Seven Seas’ statement sparked a divide among professional translators, with some thankful that the publisher listened to fan criticisms and others aggrieved that they would bend to ‘toxic’ behavior.

For example, localizer @merumeruchann, opined, “I support Seven Seas making changes if it’s in the best interest of the work. I don’t support them completely glossing over the toxic, hateful response from a section of people whose motives were plain to see. ‘Passion’ my ass.” 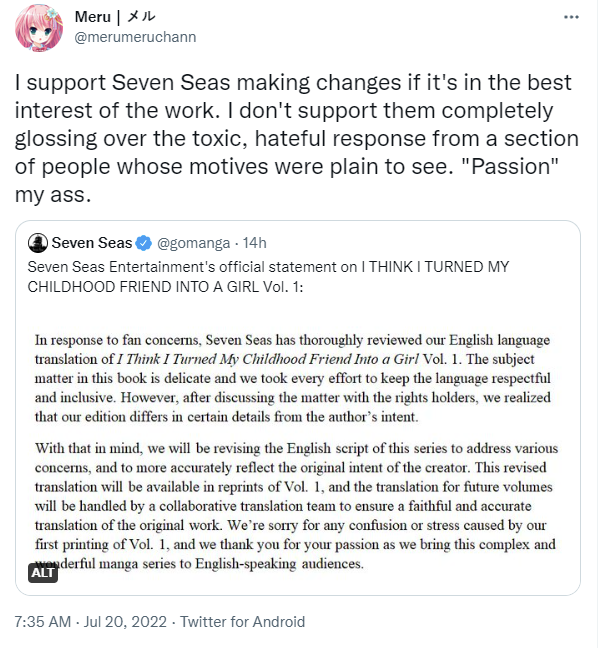 RELATED: Seven Seas Entertainment To Revise Censorship Edits Made To English Release of ‘I’m In Love With The Villainess’

“Imo companies need to start standing up to online harassment & toxicity,” she continued. “Even a generic ‘we do not condone harassment’ would suffice. Instead the large part played by targeted & ideologically motivated outrage is ignored in favour of praising the ‘passion’ of these so-called fans.”

“Yes there was legit criticism from legit fans and other observers in there.” Meru concluded her thread. “But let’s not pretend that that was the majority of the outcry.”

Returning to the subject a short while later, Meru added, “Oh yeah also, the original translation? Not in bad faith. Not ‘changing the plot’. Not ‘injecting woke politics’. Just a matter of some misinterpretation and a good faith attempt to convey some of the nuances of the source. Not everything is some grand conspiracy.” 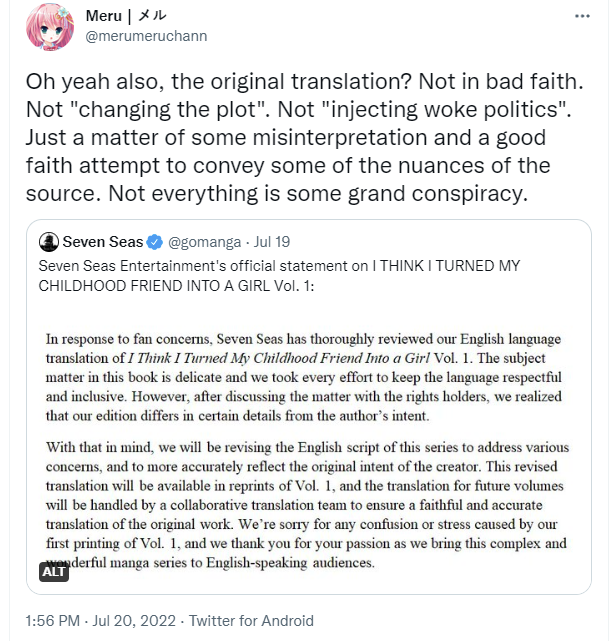 @merumeruchann’s criticism was eventually met with pushback from fellow professional translator @alita87, who chimed in, “Yeah naw. This is a bad translation.”

“No interpretation,” she maintained. “Just making fem gay into auto trans without ever asking editor to confirm with source.  I am a translator. Confirming with source and making sure your translation is both faithful AND natural SHOULD be the norm.” 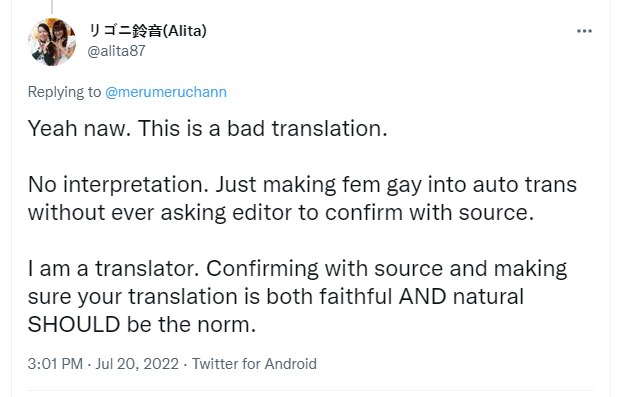 Providing further insight into the industry to another user who claimed that “Japanese companies just kinda don’t care or are too busy to care about the translation quality as long as it brings cash,” @alita87 explained, “Maybe that’s the case with some companies but the company I freelance for actually has clients that care about their material being both faithful AND making sense in natural English. Only weird one I ever had was Sushiro insisting that all !! Etc be exact placement as jp.” 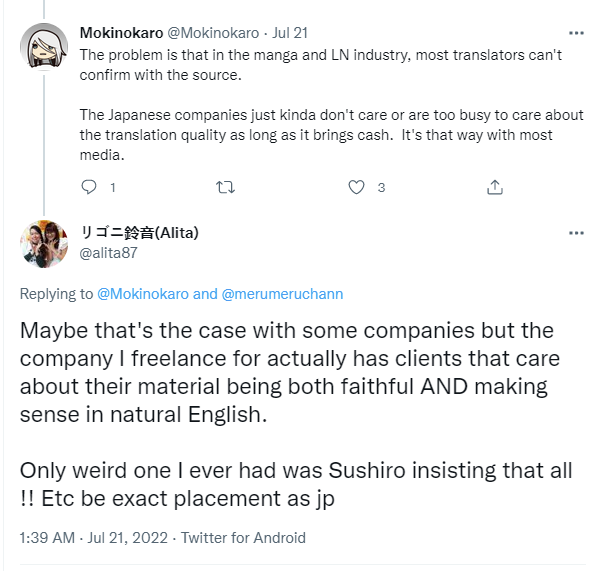 “Which I still noted to editor a couple of places where that was really odd and to show both the requested style and natural styl,” she noted. “Granted I freelance for small company BUT big ones have even greater responsibility.” 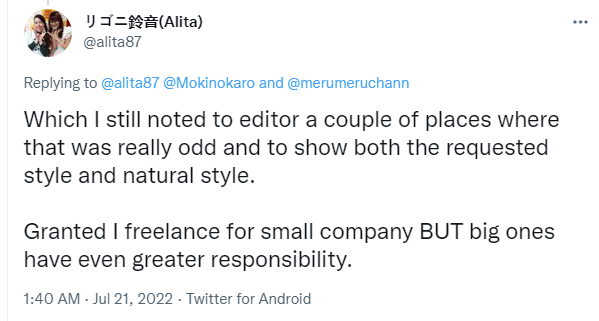 She added, “If this were a one time thing then maybe I would agree with OP, but SevenSeas and Funimation have on multiple occasions made very bad translation calls, many of which included not jp present loaded language. Journalism 101 says to avoid loaded language.” 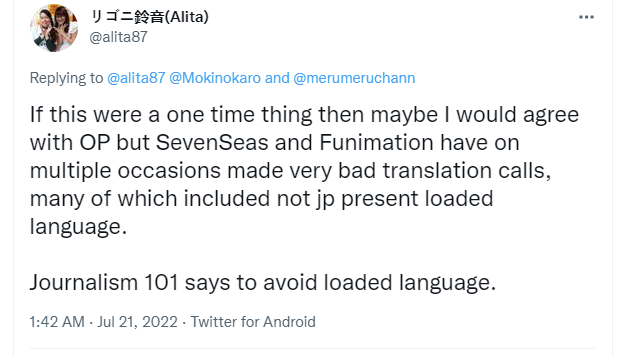 “But OP of course assumed I am a troll so blocked me lol,” observed @alita87, before proceeding to admit, “I know a lot of anime fans on Twitter are dicks but a lot of their localization concerns are in some part valid. Yes we have to sometimes make decisions.” 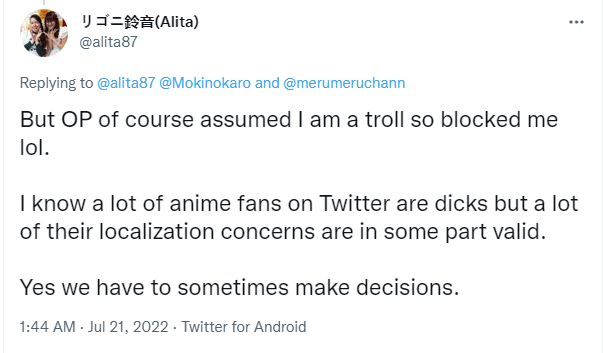 However, she also offered the caveat that said localization changes “should be made after doing thorough research if your agency is not willing to reach out to clients.” 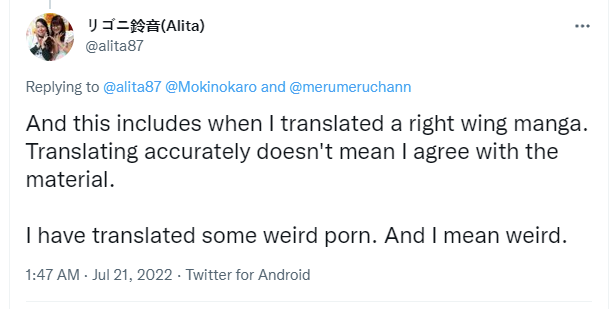 Likewise, @krymsum00 asserted, “This fiasco was not an innocent mistake.”

“The translator either did it intentionally or is unqualified for their job,” he wrote. “Good translators have to be willing to call out bad ones and hold them accountable. There’s a reason this isn’t the first time Seven Seas has had this problem.” 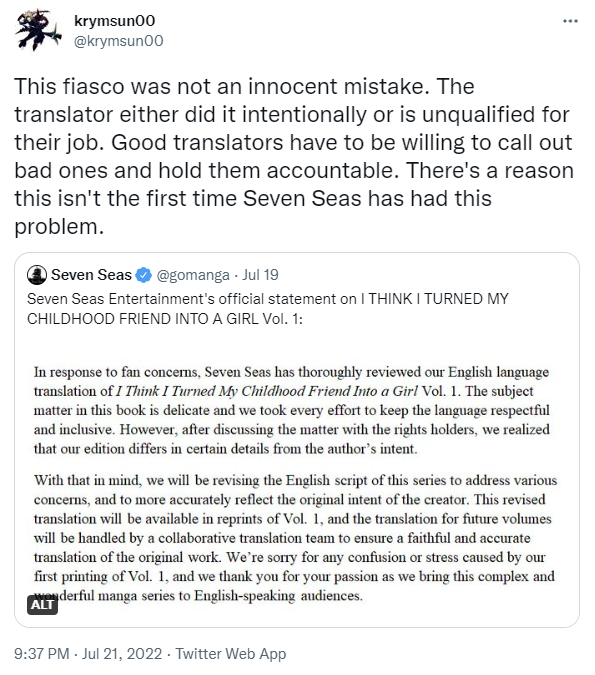 Manga localizer Zackfig questioned the wording of Seven Seas’ statement, asking the publisher, “Uh… why did you craft your statement to make it sound like accommodating to the gender non-conforming community represented by this manga is not being respectful and inclusive?”

RELATED: Seven Seas Responds To Backlash, Says They Are “Looking Into Addressing The Delicate Language” Used In Intentional Mistranslation Of ‘I Think I Turned My Childhood Friend Into a Girl’

“Like, seriously guys, your statement makes it sound like it’s the author’s fault that the trans interpretation of the character is being erased,” he saidd. “When it’s a case that said reading it’s not what was intended in the first place — so all the onus is on your team.” 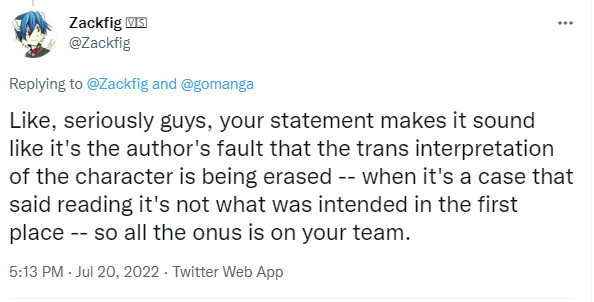 Replying to a request for comment on the situation from Bounding Into Comics, professional translator @bansama informed us, “Any ‘decent’ localisation chain has an official route to consult with the author. The translator may not get the answer but someone in the chain will.”

“Which is also why a decent chain has *several* bilinguals checking the work to make sure it’s faithful and not mistake riddled,” he detailed. “There’s no excuse for this mistake being published as was. It’s just further evidence that Seven Seas lacks a proper localisation flow.” 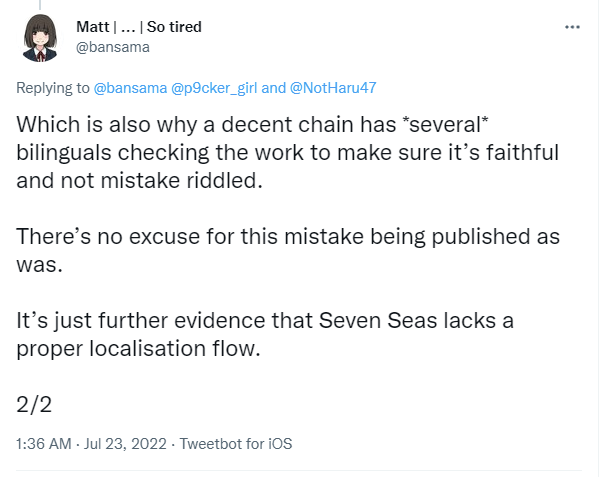 Based on Seven Seas statement, if it had not been for the manga readers mobilizing directly to the Japanese Publisher, Seven Seas would have kept their localization for I Think I Turned My Childhood Friend Into a Girl as is.

As of this publication, Seven Seas has not released any information regarding how readers who purchased the mistranslated edition may request a refund or exchange.