Ubisoft has announced that the Splinter Cell remake will have a rewritten and updated story “for a modern-day audience.” 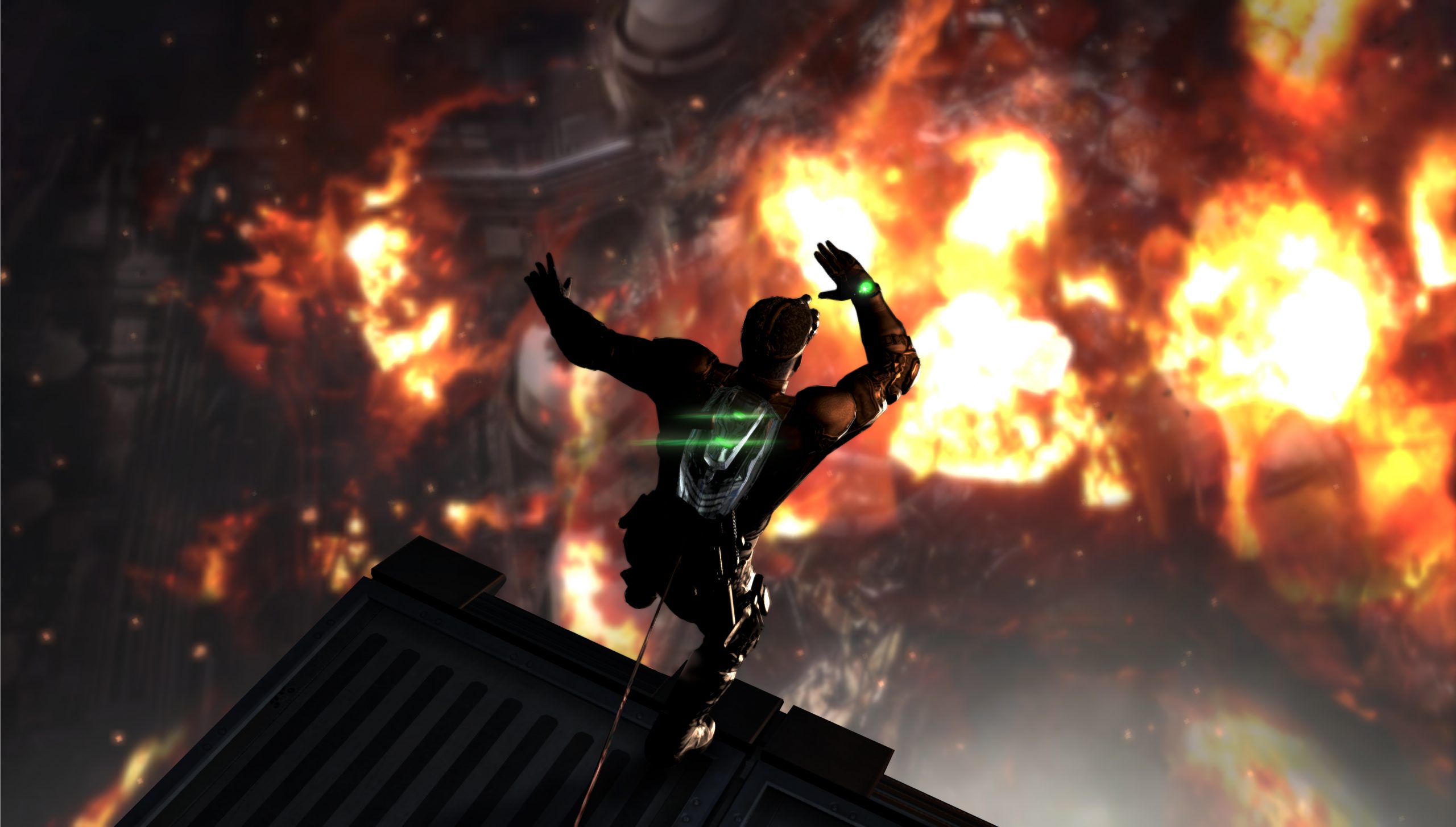 “Using the first Splinter Cell game as our foundation we are rewriting and updating the story for a modern-day audience,” Ubisoft reveal. “We want to keep the spirit and themes of the original game while exploring our characters and the world to make them more authentic and believable.”

“As a Scriptwriter at Ubisoft Toronto, you will join the Narrative team and help create a cohesive and compelling narrative experience for a new audience of Splinter Cell fans.” Those who have “Proven experience crafting and developing stories” in a “large production” are expected to write scripted and systemic dialogue, and using it to develop character arcs and story beats. 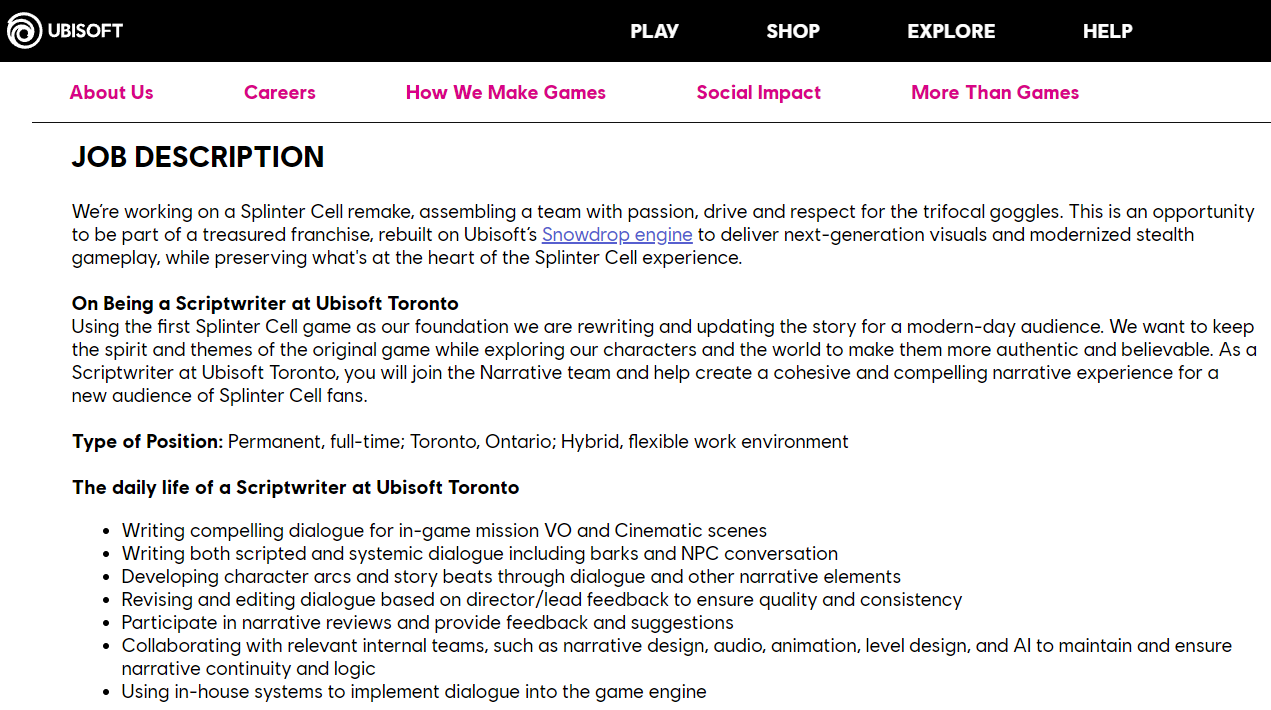 Reactions to the job listing on the Splinter Cell unofficial subreddit were not positive. Many feared Sam would be made into a millennial at worst, or that the remake would fail to live up to the quality of the original games’ scripts and stories at best.

“Modern audience” is also a cursed term among players, typically meaning the game caters to more sensitive sensibilities or features easier gameplay mechanics. It has also been synonymous with censorship, thanks to games like Resident Evil 4 VR. The term is also weighted in other media, including Magic: The Gathering, The Lord of the Rings, Astro Boy, X-Men, and many more. 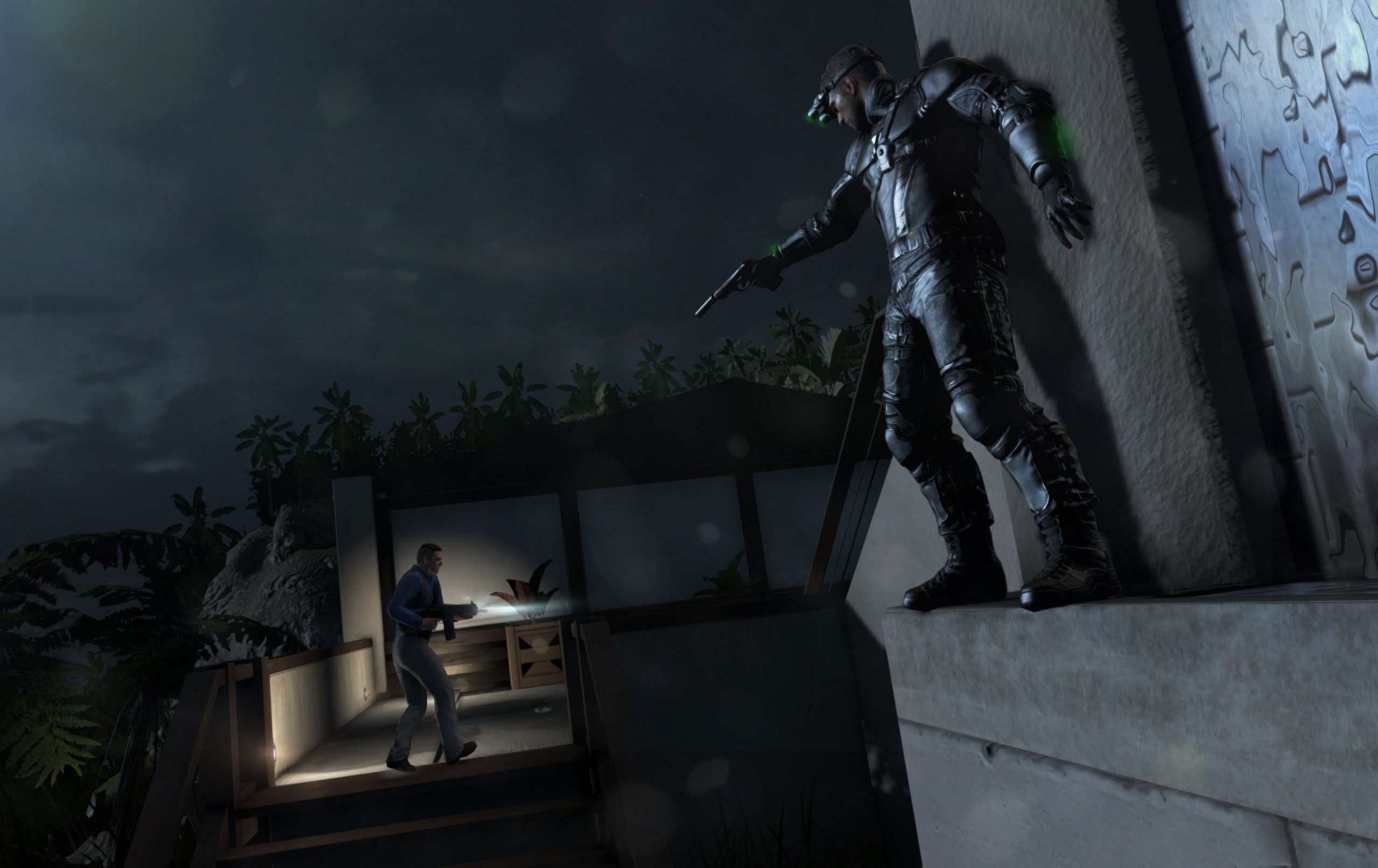 While the existence of the Splinter Cell remake was leaked by VGC’s sources in October 2021, Venture Beat later added that aspects of the 2016 Hitman series had been implemented. Though they add that this was based on an early prototype testers had experienced, and the final game may be different.

When officially announced the game had been greenlit at the end of last year, Producer Matt West stated, “Although we’re still in the very earliest stages of development, what we’re trying to do is make sure the spirit of the early games remains intact, in all of the ways that gave early Splinter Cell its identity.”

“So, as we’re building it from the ground up, we’re going to update it visually, as well as some of the design elements to match player comfort and expectations, and we are going to keep it linear like the original games, not make it open world,” he revealed. “How do we make sure that new fans are able to pick up the controller and dive right in, and fall in love with the game and the world right from the get-go?” 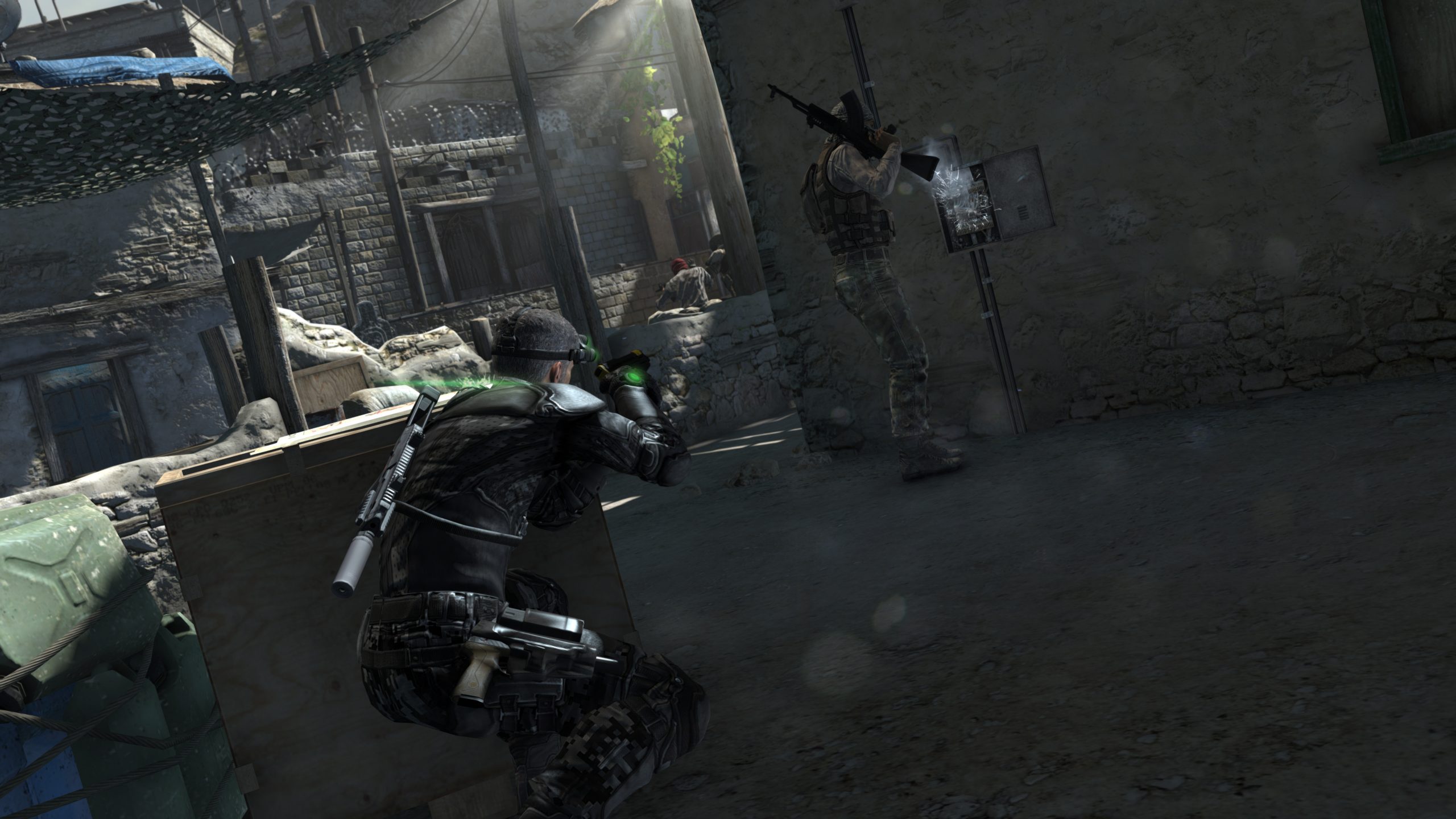 Nonetheless, West also spoke on how Ubisoft aim to respect the original games. “I’ll throw this out there: You’ve got to have a tagline, and one of the things that we’re using currently as the tagline, from the very beginning, is the phrase ‘respect the goggles.'”

“I love the goggles as a symbol for Sam. We are making a game that is going to be modern, but built on the foundation of the brand’s rich history. The game earned its stripes the right way, by being innovative and challenging, and a really different experience than what was in the marketplace at the time. ‘Respect the goggles’ helps to remind us of the fact that we have to do it justice,” the producer explained. 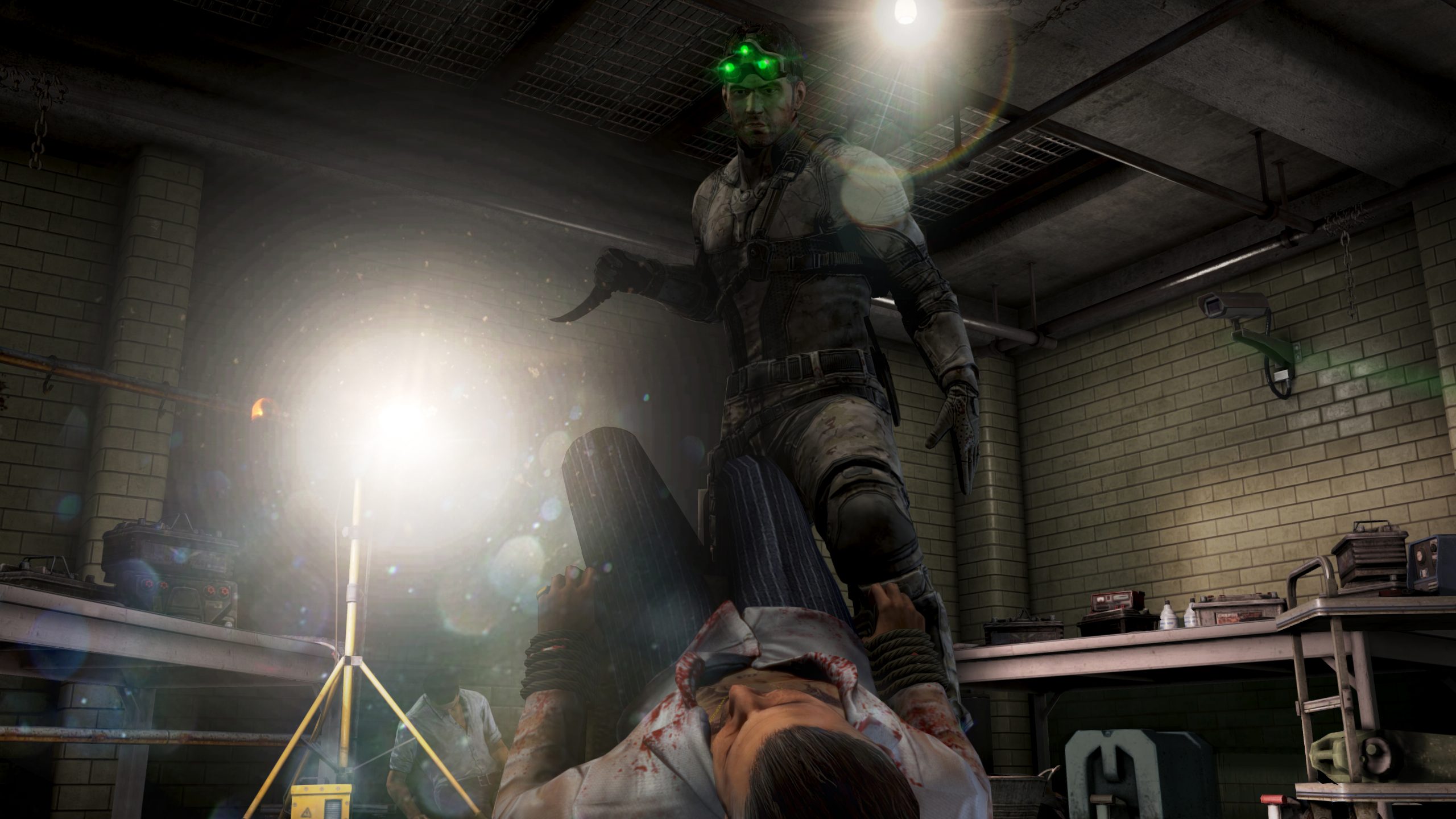 “There’s stuff that simply needs to be redone from scratch to be up to snuff for a modern gameplay experience,” West reiterated. “With that, though, what do we need to do to absolutely preserve the feeling of early Splinter Cell?”

“We’re going to be straddling the line between the spirit of the old, and the comfort of the new, so that we can excite and surprise new players, but also make sure that when our returning players pick up the controller, they have that sigh of relief, saying ‘Ahhh, they got it.'”

NEXT: Ubisoft CEO Confirms “Big AAA” Games Will Be $70, Other Games “At The Same Price As The Competition”