Throughout the COVID-19 pandemic, the politically outspoken Matthew Marsden has been vocal in his denouncing the draconian mandates imposed by companies across the world and the country — especially in Hollywood.

And it turns out, as recently revealed by the actor who portrayed the title character’s father Stan in Amazon’s Reacher, this the strength of his convictions has even cost him a job opportunity. 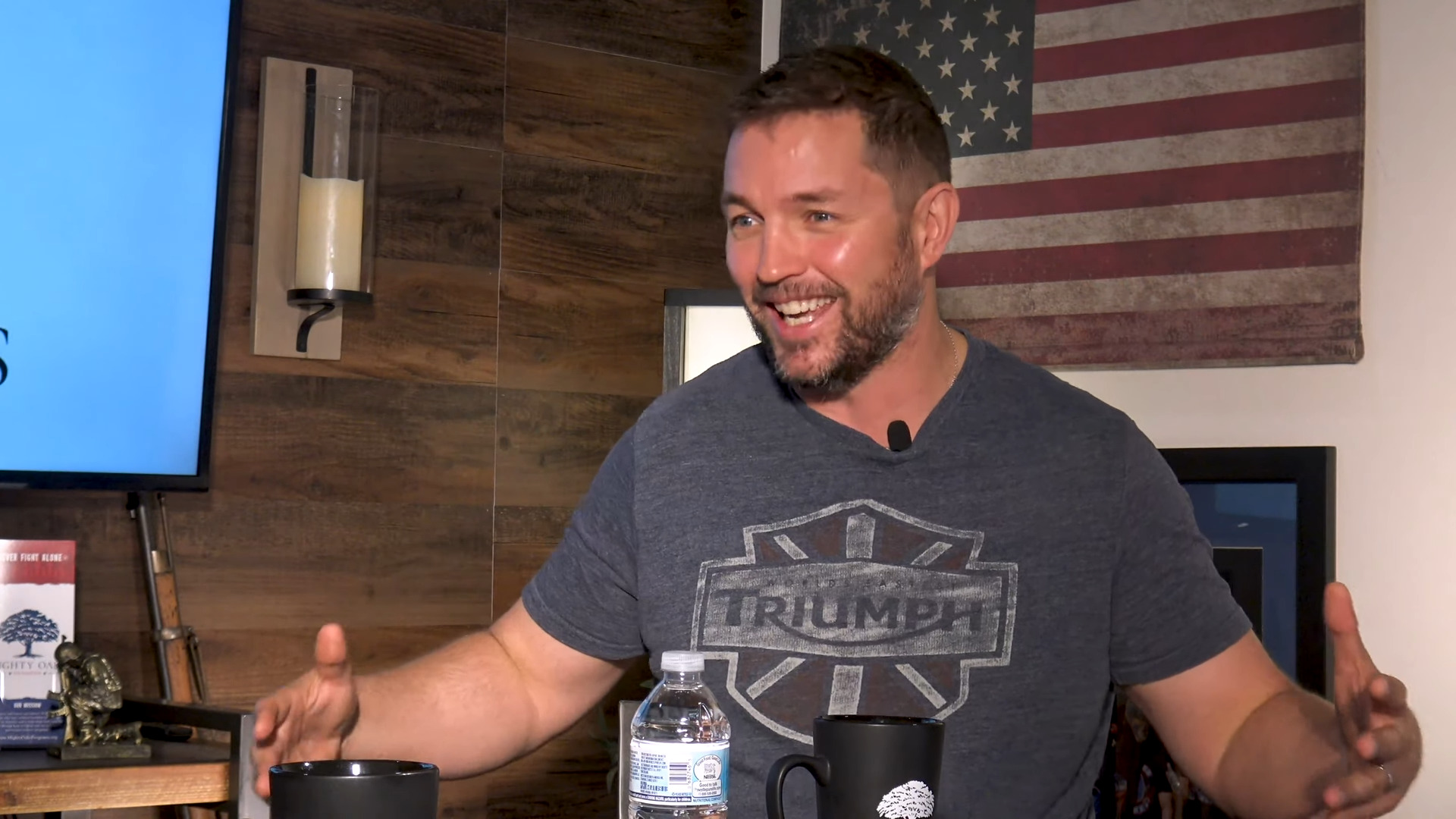 “One of the reasons I spoke out on Twitter is because I saw that people felt like they didn’t have a say,” tweeted Marsden on December 8th. “I am aware of the risks involved and I appreciate the dms supporting me.”

To this end, he then revealed, “I lost a job last week because I am unvaccinated and I will not lie about it.” 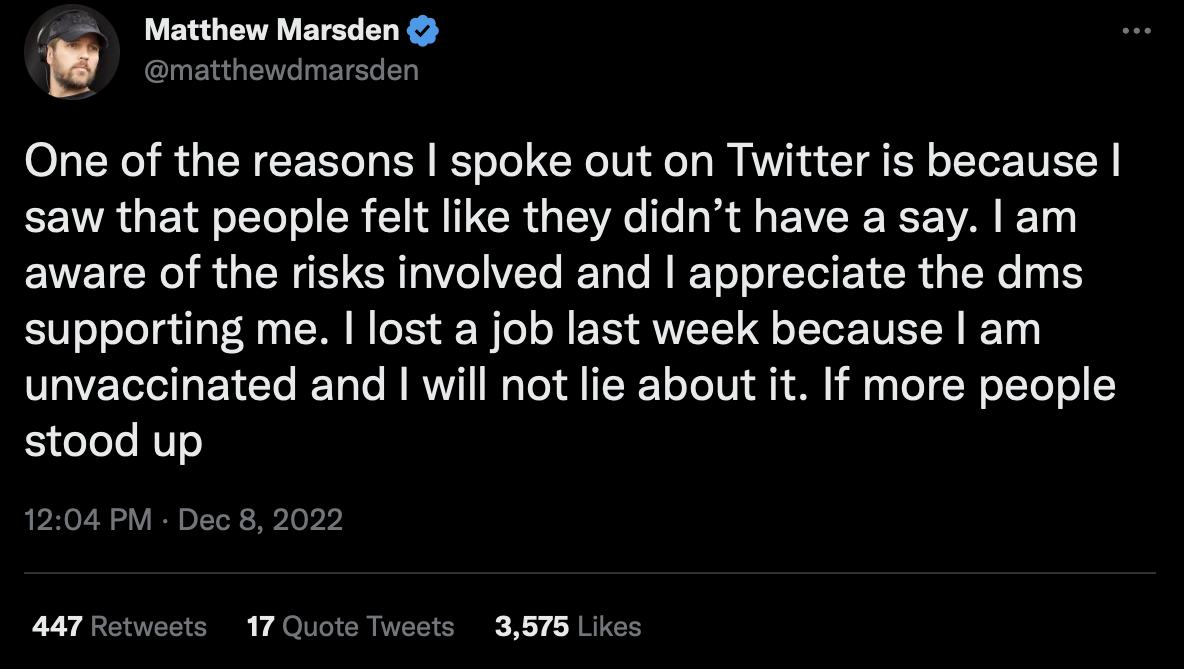 “If more people stood up in Hollywood, or any other profession and said ‘no’ then these vaccine mandates would have gone away.”

“It is the same on twitter,” Marsden compared. “The trolls know they can push you around. It is never going to end. No one forces you to post politically. Your choice.” 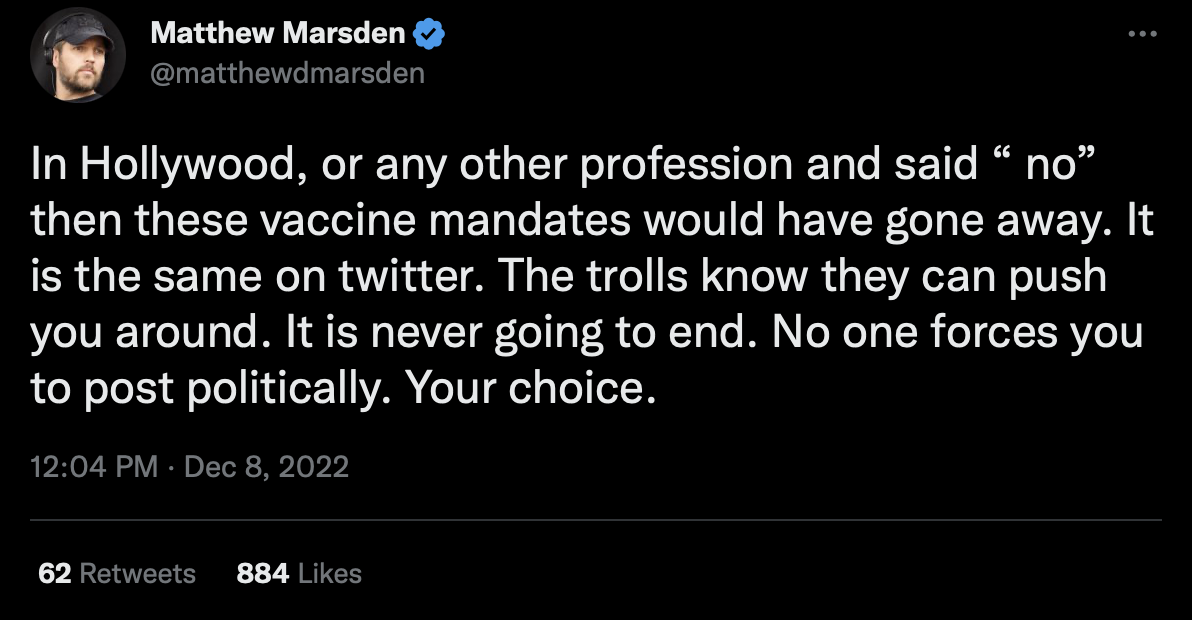 Returning to the topic early the next morning, the I Am That Man actor noted, “Just remember, covid didn’t disappear. People that didn’t take the vaccine are still alive. People that did, are still getting covid and getting sick. People aren’t wearing masks and somehow we are still going about our daily lives.”

“It could have been this way the whole time,” Marsden lamented. 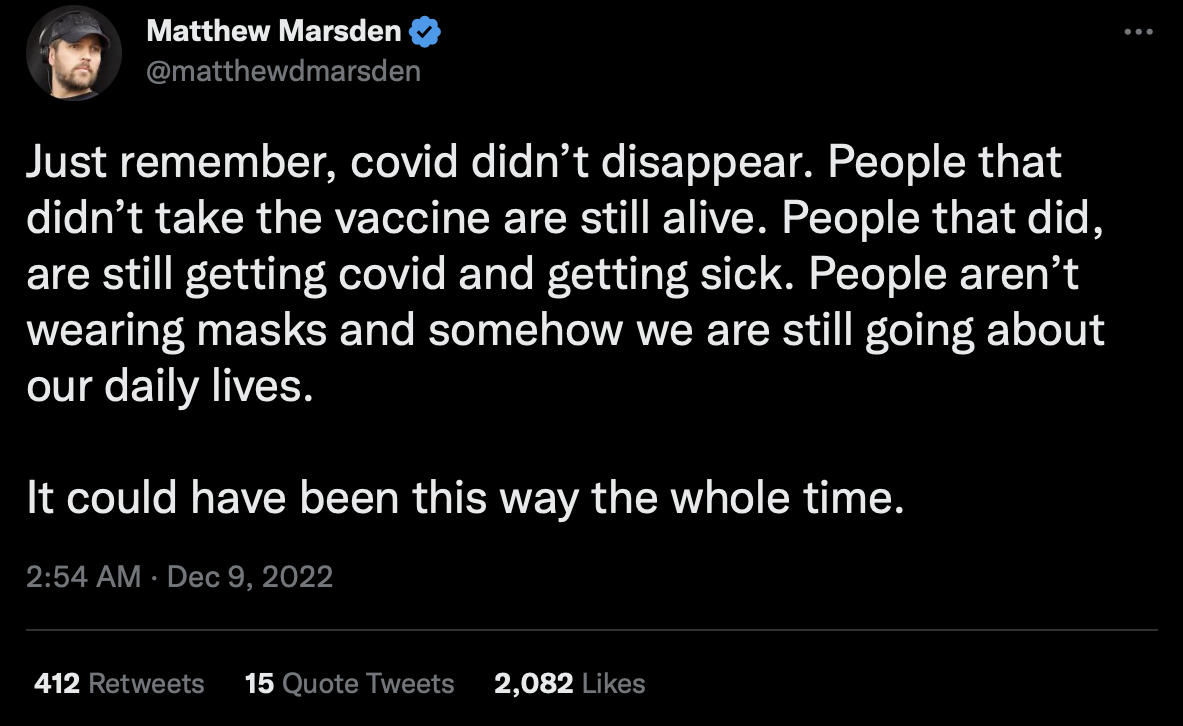 Later, the actor theorised that men did not speak out against such COVID-19 mandates because society has effectively neutered them.

Quote-tweeting a post shared by @Heachy_1979 in which she pointed out that while “many men stuck on their face muzzles & lacked balls during COVID” she had conversely “seen far more women kick back”, Marsden asserted, “Men have been emasculated so much over the past few years, they have been taught that to stand up for something you believe in is ‘toxic masculinity.'”

“It starts in school where boys are expected to behave like girls,” he continued. “Women have stepped up, cause they are protecting their kids.” 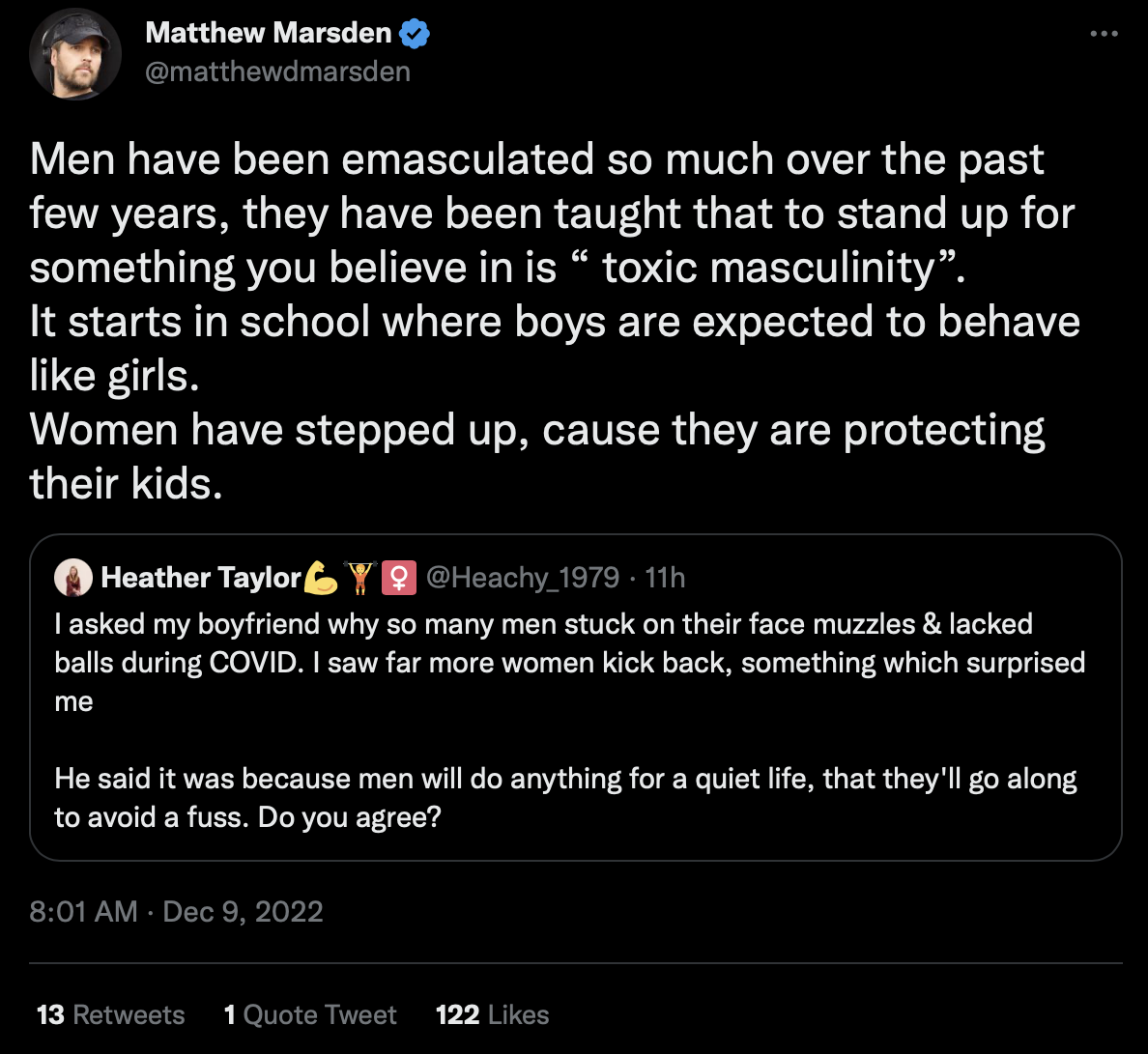 In an example of his historical commitment to fighting against the COVID-19 panic, in October 2021, Marsden called out the massive hypocrisy of pro-vaccination advocates’ dictatorial behavior towards those who do not wish to get the jab.

“It’s amazing that people are calling the unvaccinated selfish, while simultaneously saying that if they do not compromise their morals, they should lose their jobs, travel, not be treated in hospitals, not be allowed to live their normal lives,” concluded the actor. “That used to be called bullying.” 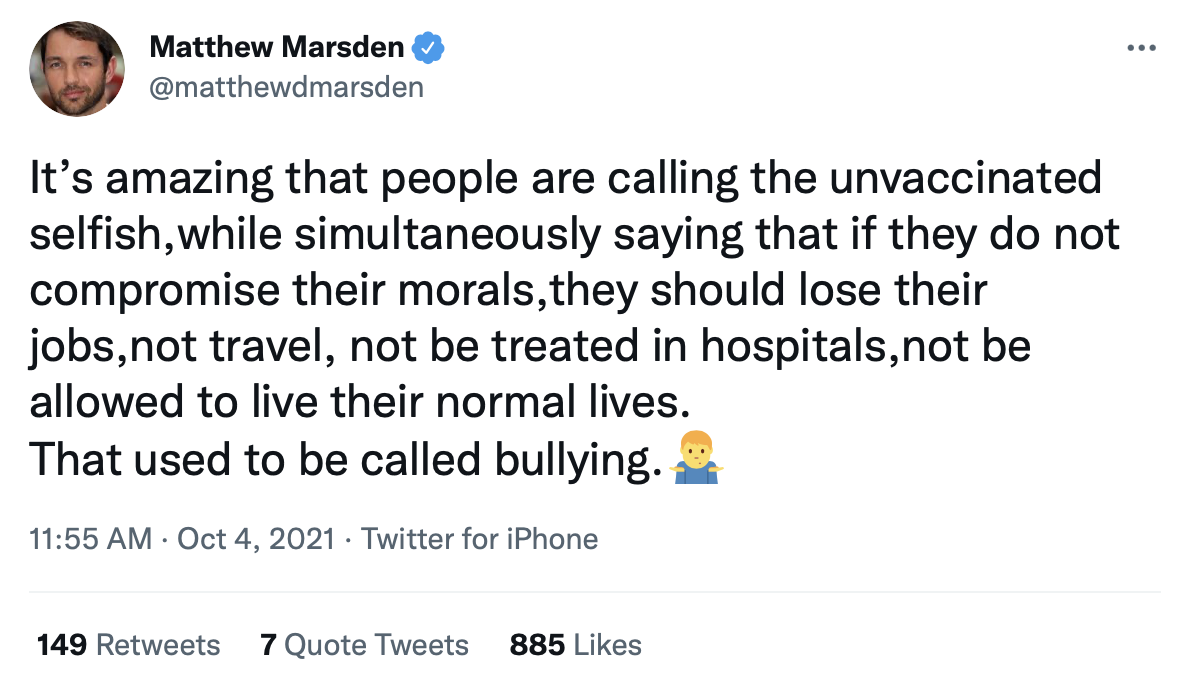