Faced with the widespread panning of his ‘pregnant Joker’ story, DC writer Matthew Rosenberg has sought to clarify that his expectant take on the Clown Prince of Crime in the latest issue of The Joker: The Man Who Stopped Laughing was intended as nothing more than an attempt at humor. 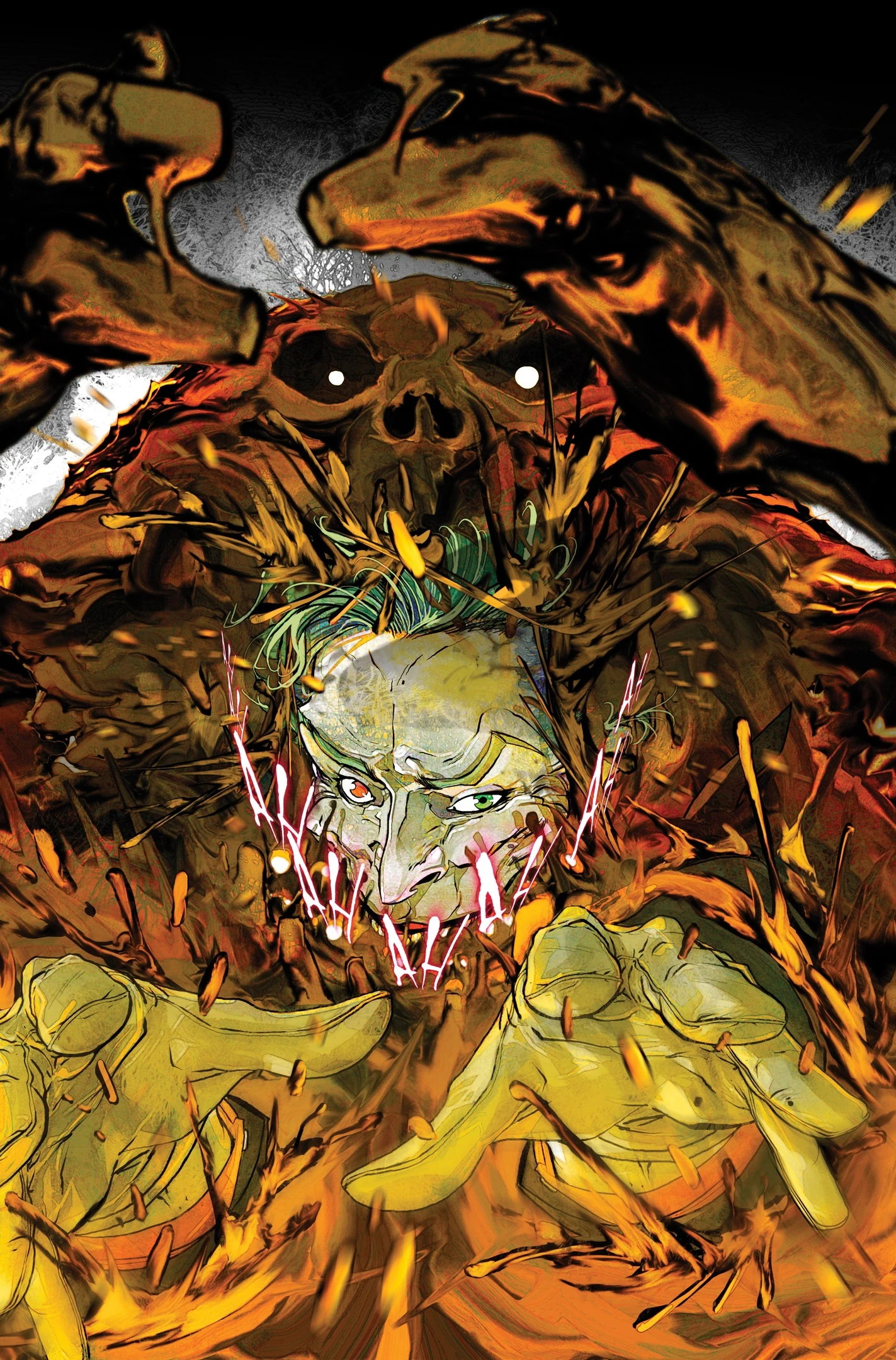 The Joker and Clayface meld together on Carmine Di Giandomenico’s cover to The Joker: The Man Who Stopped Laughing Vol. 1 #4 (2023), DC Comics

RELATED: Ethan Van Sciver Reacts To The Joker Becoming Pregnant In New Issue Of ‘Joker: The Man Who Stopped Laughing’: “DC Comics Is Getting Weirder And Weirder”

As previously reported, the fourth issue of the Batman arch-villain’s latest solo series featured a back-up story by Rosenberg in which the Joker, after being hexed by Zatanna so that “no one else will ever have [his] baby”, accidentally ingests a large amount of Clayface refuse and subsequently ‘gives birth’ to a muddy, child-like clone of himself. 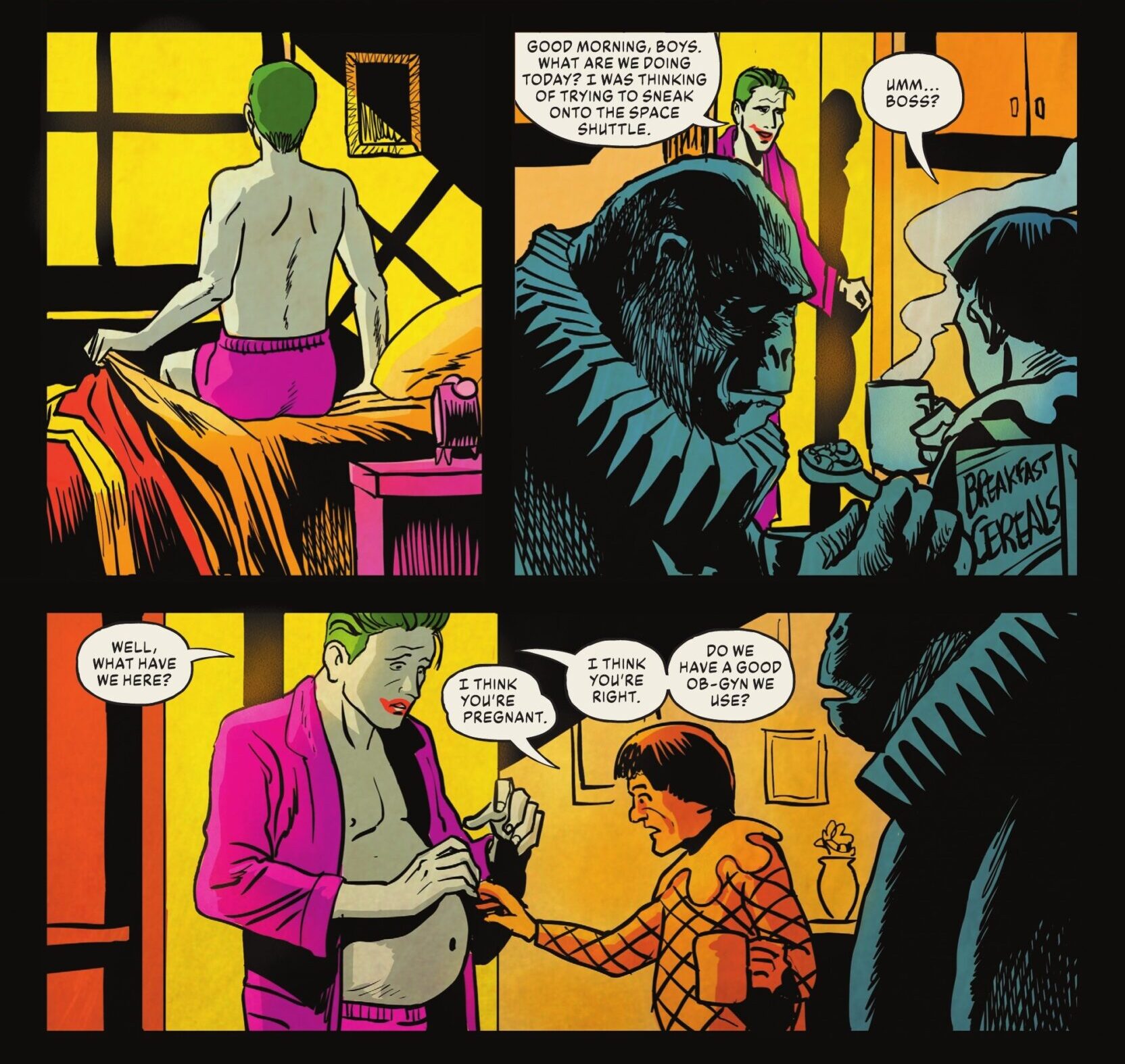 The Joker, Gaggy, and Jackanapes make a surprising discovery in The Man Who Stopped Laughing Vol. 1 #4 “Knocked Upside Down!” (2023), DC Comics. Words by Matthew Rosenberg, art by Francesco Francavilla.

Unfortunately for Rosenberg, thanks to the current sociopolitical debate surrounding the concept of gender, his ostensible attempt at campy body horror quickly caught mainstream attention, as many readers believed the tale to be yet another endorsement by DC of neoliberal ideology.

“DC Comics is getting weirder and weirder, allowing more perverts and fetishists to make grotesque filth out of their classic characters,” said former DC artist Ethan Van Sciver, his declaration fairly representative of this particular take on the whole affair. “Fellows, BATMAN is your last sellable comics franchise.” 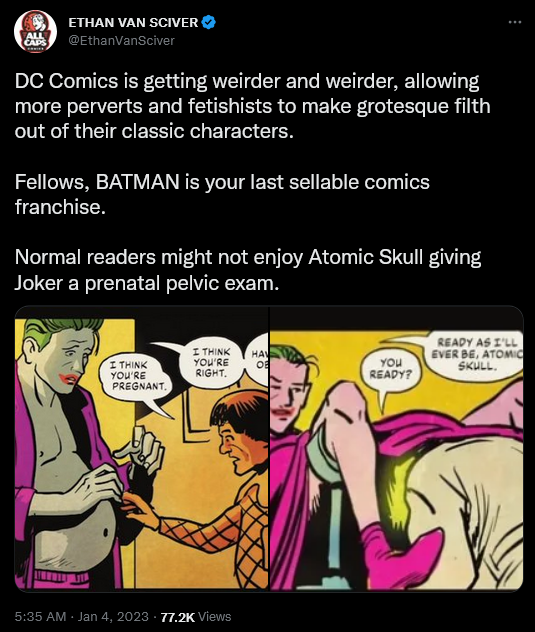 Unhappy with such criticisms being leveled at his story, Rosenberg addressed the situation in a January 15th blog post made to his personal Substack account. 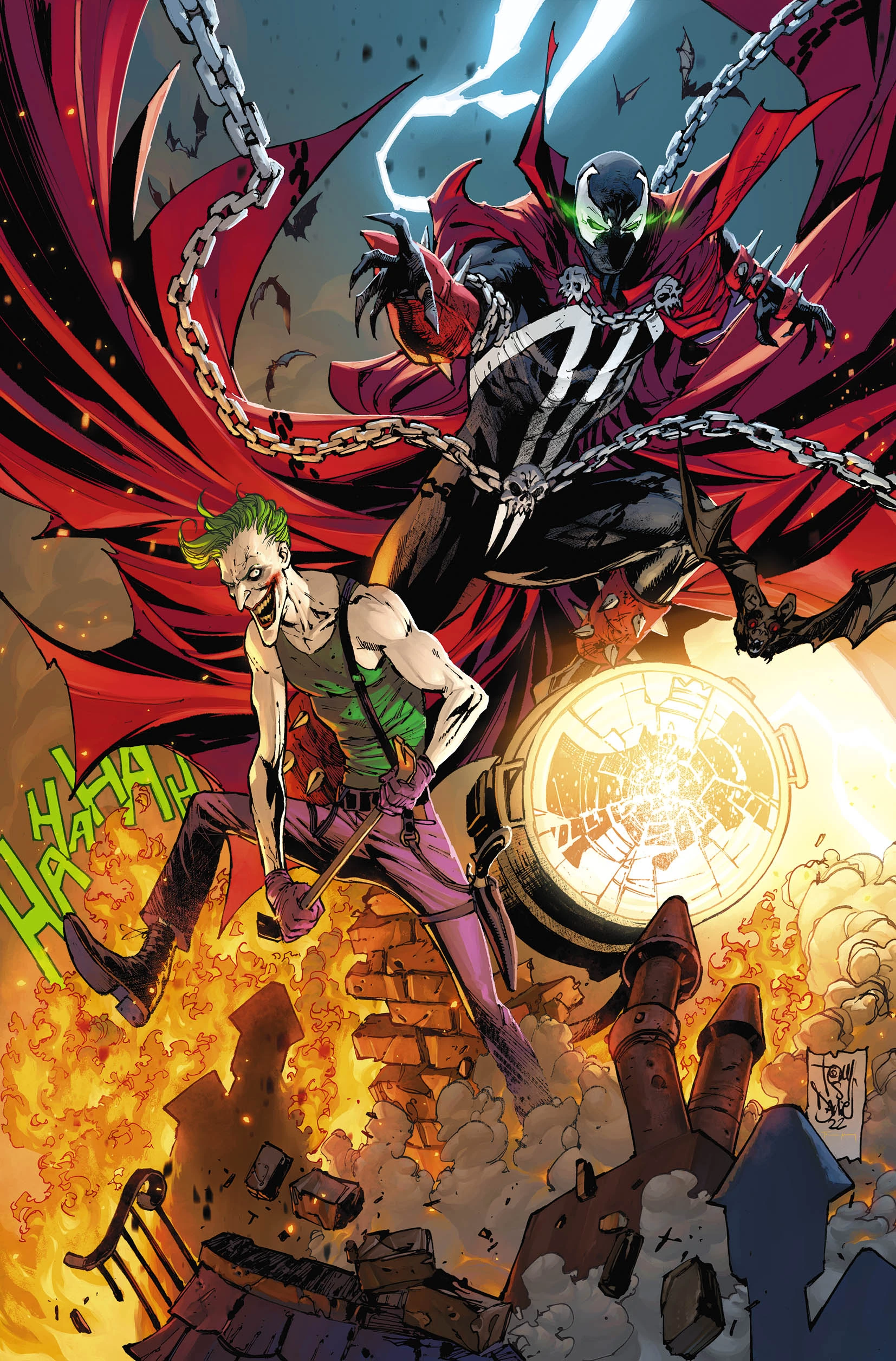 The Clown Prince of Crime teams up with the Angel of Armageddon on Tony S. Daniel and Tomeu Morey’s Spawn variant cover to The Joker: The Man Who Laughs Vol. 1 #3 (2023), DC Comics

“If you don’t get your news from the ‘here’s what to be angry about’ people you may have missed this,” explained the writer to his readers. “But certain corners of the world are quite mad that the new issue of THE JOKER: THE MAN WHO STOPPED LAUGHING makes the Joker trans and then they become pregnant and give birth. How could we?! Think of the children!!”

“Only, slight problem, none of that actually happens in the comic,” he added. “That didn’t stop Fox News, The NY Post, Channel 1 Russia, various internet outrage peddlers, and so many of the other sources of journalistic excellence from going all in on it this past week.” 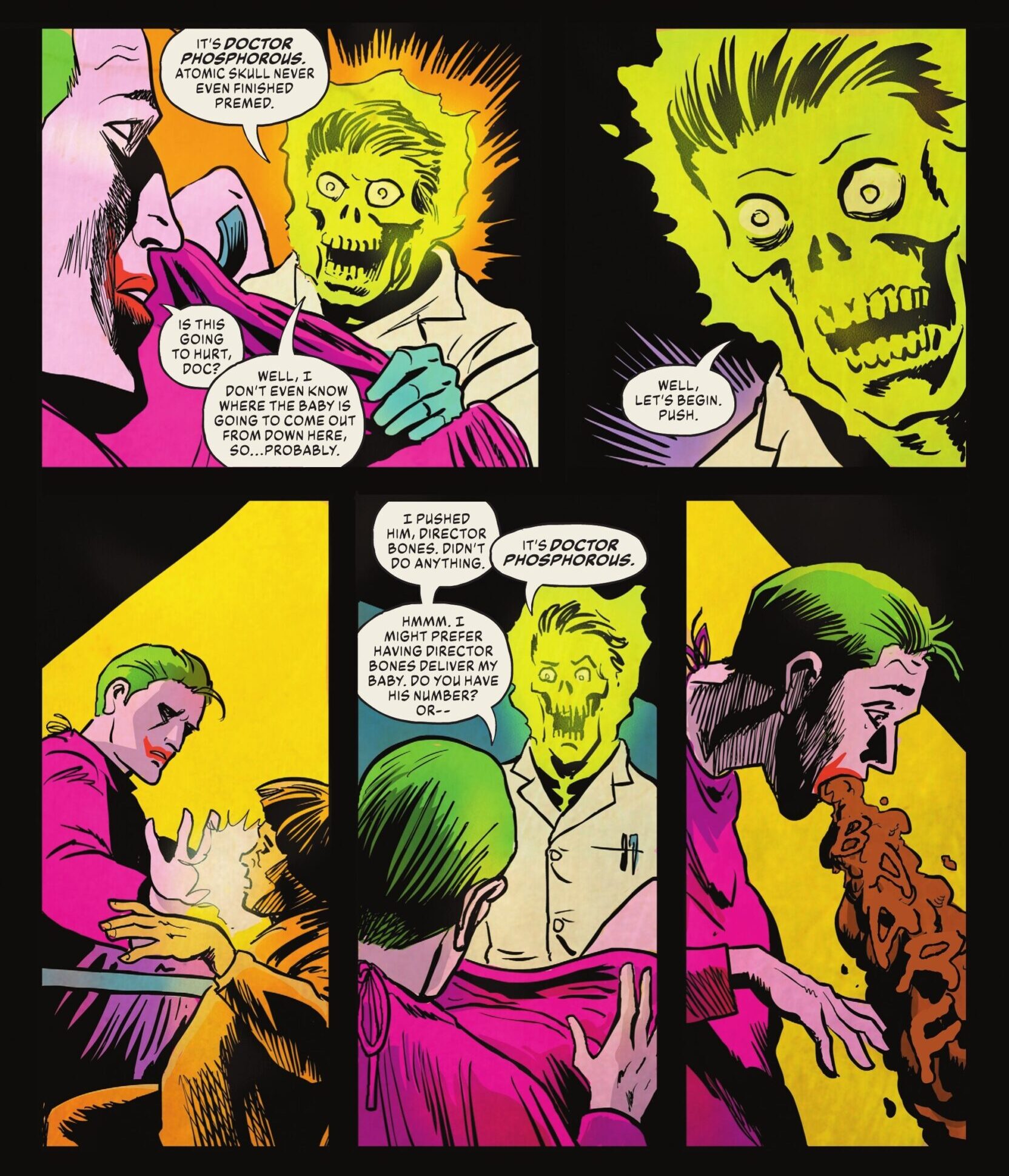 RELATED: Margot Robbie On Lady Gaga Being Cast As Harley Quinn In ‘Joker: Folie A Deux’: “It’s An Honor To Have Built Such A Strong Foundation For The Character That Other Actors Can Have A Go At Playing Her”

It should be noted that despite Rosenberg’s grandstanding, neither Fox News‘ report on the story, which was subsequently licensed and shared verbatim by The New York Post, put forth this claim (at the time of writing, clips from the state-sponsored Channel 1 Russia’s coverage were unavailable online).

In fact, the report’s author, Gabriel Hays, specifically wrote that “readers may be tempted to think this is part of DC’s attempt to do some woke, LGBTQ-inclusive storytelling with The Joker being a transgender man undergoing a typical pregnancy, though it’s not quite that simple” before going on to explain the story’s actual plot. 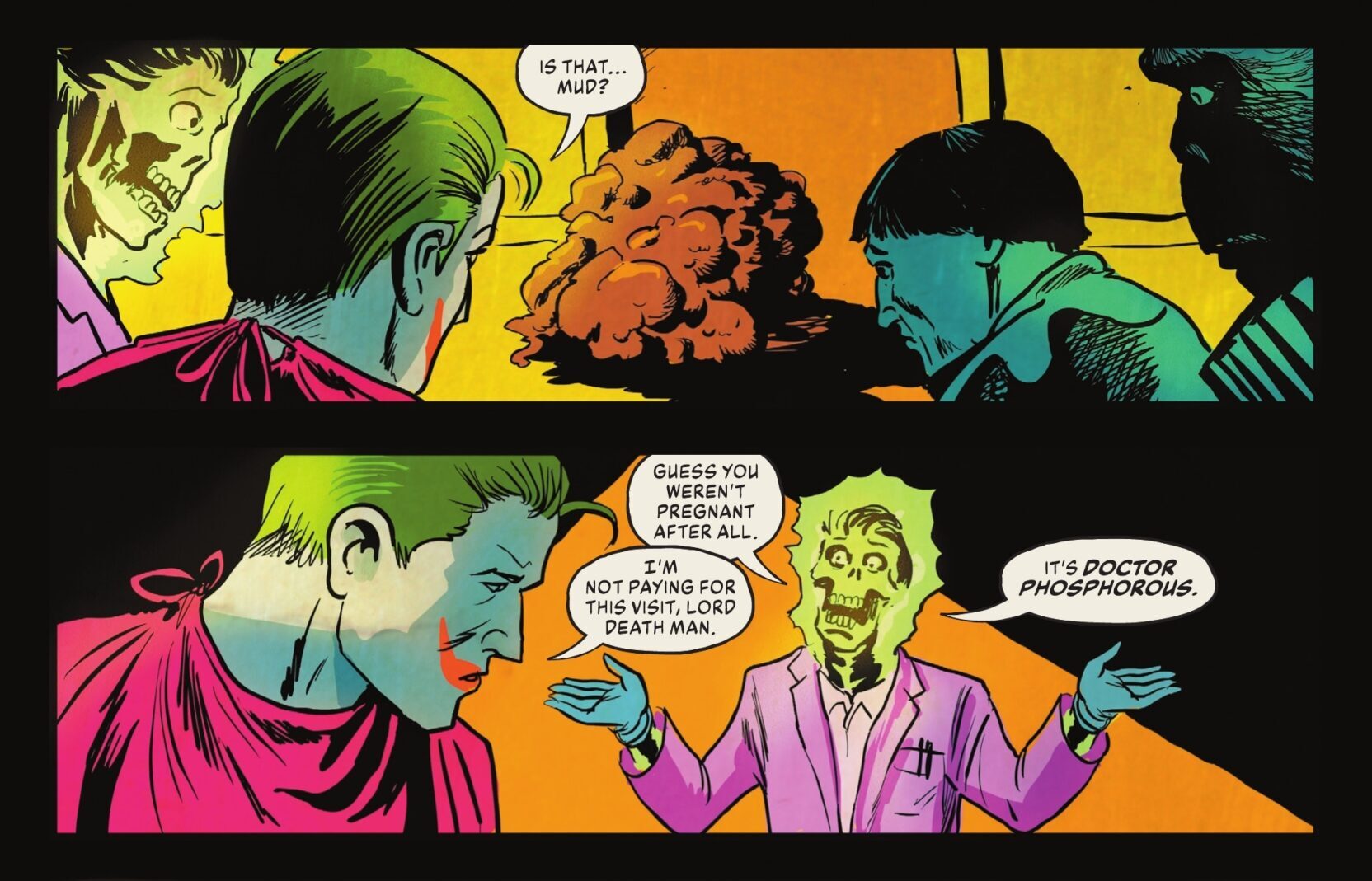 The Joker confronts his fetus in The Man Who Stopped Laughing Vol. 1 #4 “Knocked Upside Down!” (2023), DC Comics. Words by Matthew Rosenberg, art by Francesco Francavilla.

Rather, as quoted by Hays, this erroneous read of the situation seems to have been made by a single individual, director and former US congressional candidate Robby Starbuck.

“In the new Joker comic he gets pregnant and gives birth,” tweeted Starbuck on January 6th. “Yep, the Joker is trans now. At least the character is the joker because a pregnant woman thinking they’re a pregnant man is the definition of a joker. Who else is sick of this lunacy?” 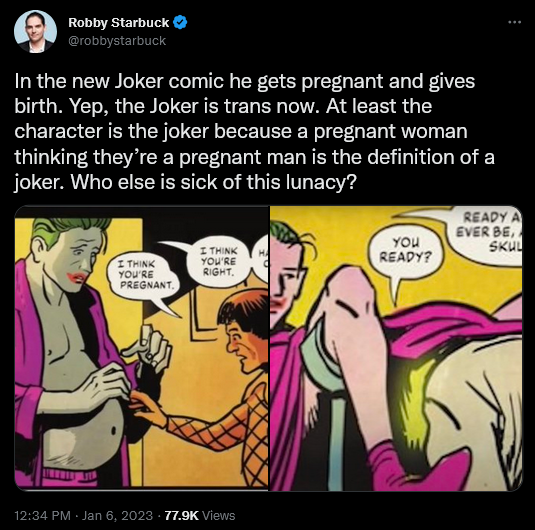 Returning to Rosenberg’s post, the author then explained how the backup stories featured in The Joker: The Man Who Stopped Laughing “are made to be sort of Silver Age style fever dreams of the Joker that explore different, non-continuity explanations of how there could be multiple Jokers and other themes of the main book.”

“In each issue the events of the previous issue aren’t discussed or acknowledged,” he continued. “They are, literally, silly gag strips. We wanted to pay tribute to the fun old stuff of DC’s history where Batman becomes 2 Dimensional, or Superman turns himself into a lion, or a tree, or an ant, or Jimmy Olsen marries a gorilla, or Lois Lane turns herself Black. Well, not that one.” 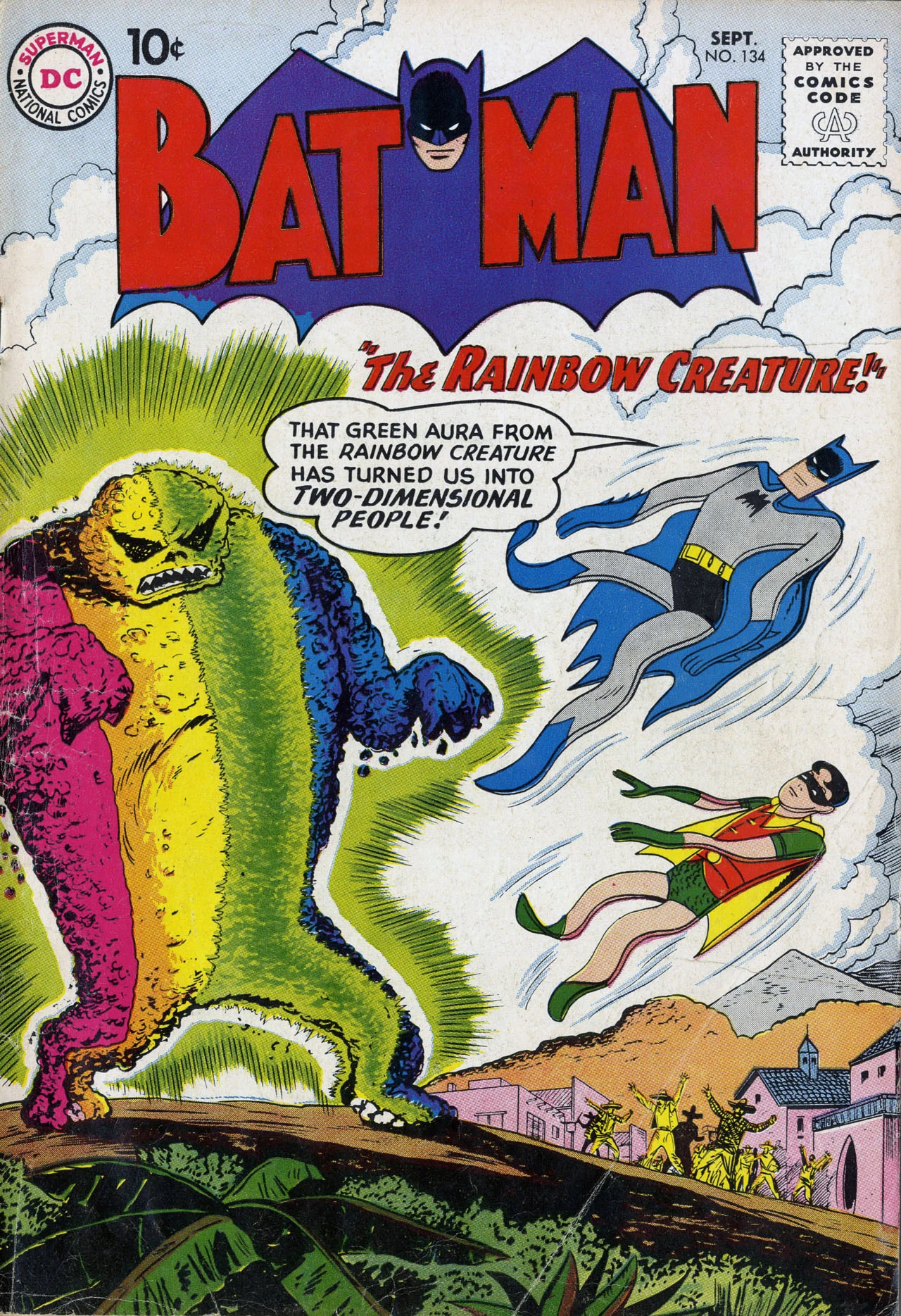 Following his own summary of the story’s events, Rosenberg declared that the Joker’s psuedo-pregnancy “isn’t an allegory, a metaphor, or social commentary. It’s a joke.”

“I will say, so this doesn’t come off as some sort of backpedalling, I believe Trans rights are Human rights,” he noted. “With that said, it has nothing to do with this story. This is a story about magical food poisoning.” 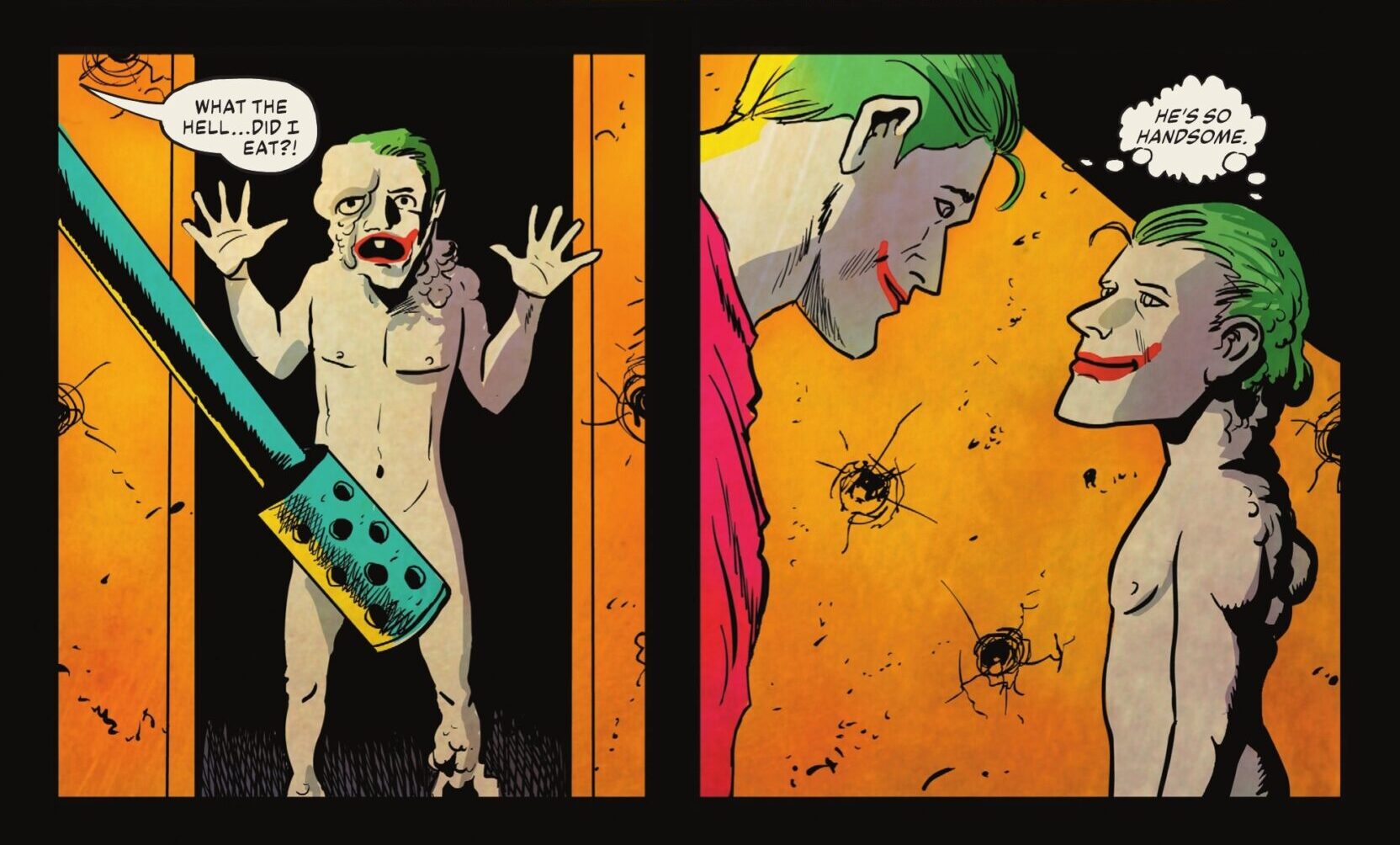 The Joker meets his ‘son’ in The Man Who Stopped Laughing Vol. 1 #4 “Knocked Upside Down!” (2023), DC Comics. Words by Matthew Rosenberg, art by Francesco Francavilla.

“Now I understand the folks at Fox News and the Post might look up to the Joker and see his an aspirational figure,” the writer sarcastically continued.

“Yes, he once grew enormous and ate all the people in China [emphasis Rosenberg’s] with a giant pair of chopsticks, but I guess they can look the other way on that,” he said. “And yes, he once cut his own face off for fun and walked around with an exposed skull for a while, but who hasn’t? And sure he once paralyzed and then sexually assaulted a woman, took photos of it, and the projected them on a wall while he sexually assaulted her father, but I think Fox & Friends was kinda into that. I was in no way trying to damage the pristine legacy of this psychotic serial murder that they hold in such high regard, but I guess to them I did. And for that I apologize…” 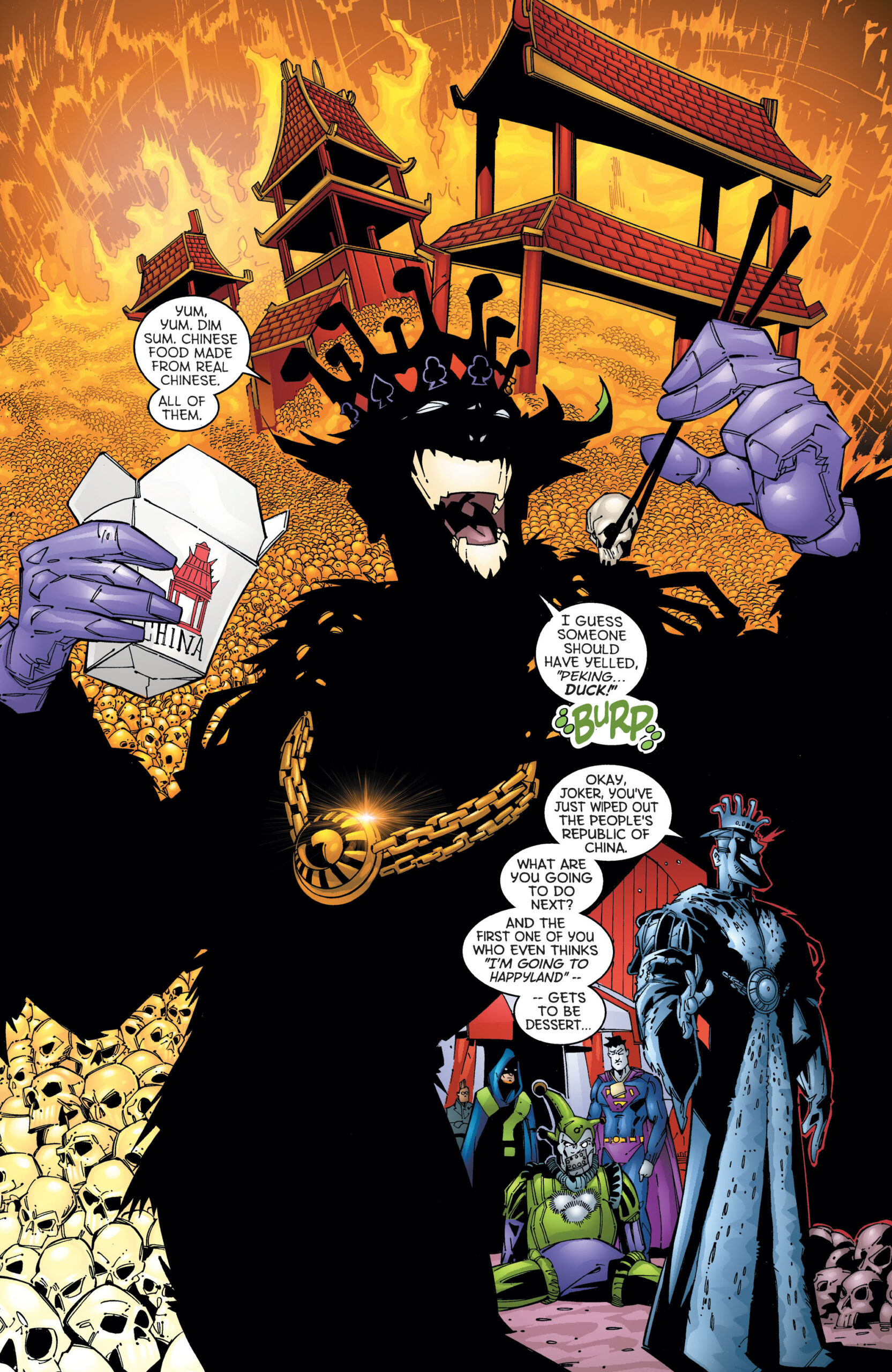 “Or maybe they work on a cycle of feeding outrage and alienation to their audience in order to keep them engaged and angry, and they don’t care if they take things out of context, misrepresent things, or even lie,” he concluded. “But I’m sure that’s not it, right? Either way, thanks for promoting our book. I’ve heard from a lot of retailers that it’s selling out. We appreciate it.”

The next issue of Rosenberg’s The Joker: The Man Who Stopped Laughing is currently set to hits shelves on February 7th. 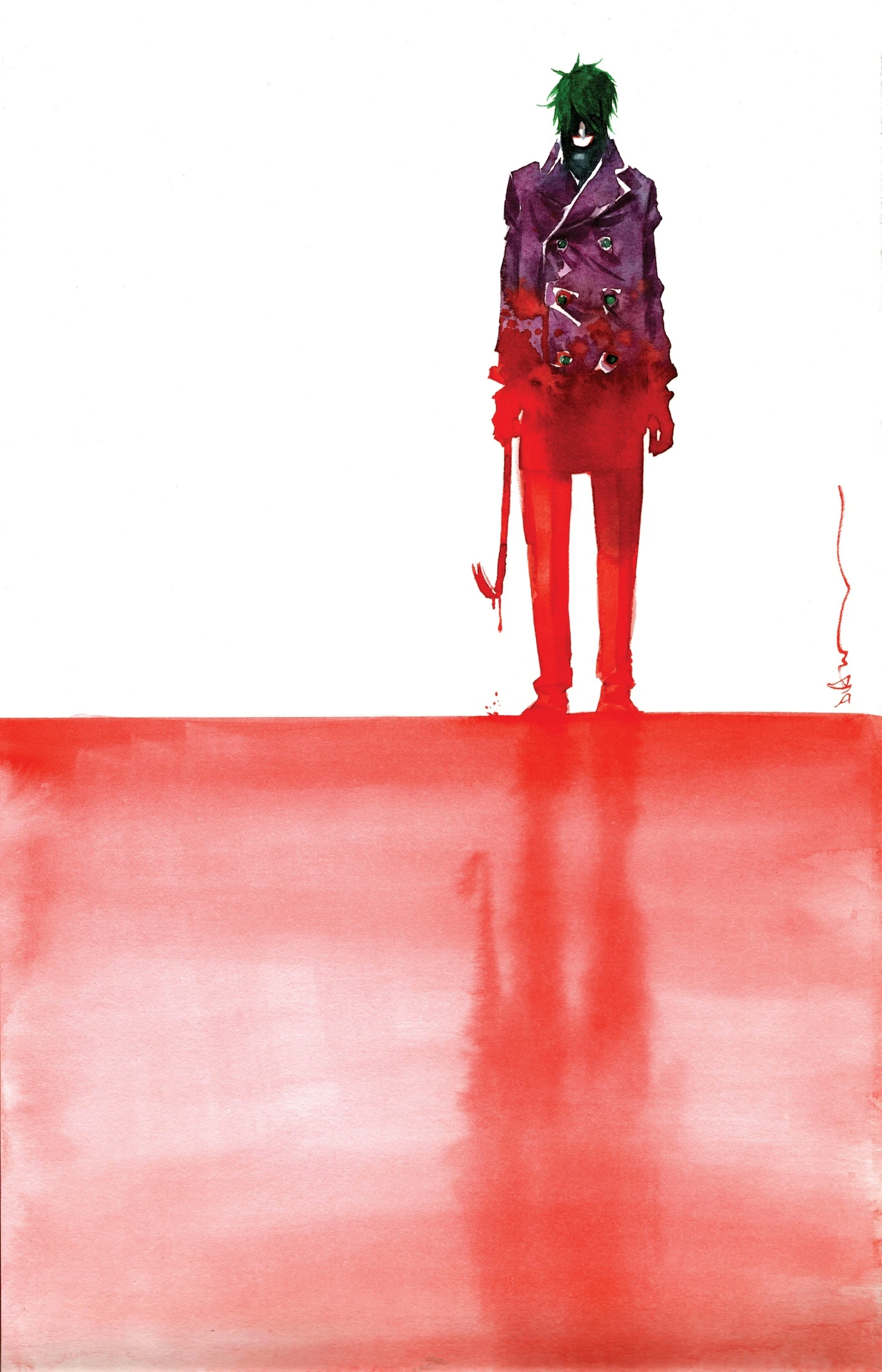 The Joker wields his signature crowbar on Dustin Nguyen’s variant cover to The Joker: The Man Who Stopped Laughing Vol. 1 #4 (2023), DC Comics